Action Figure Review: The Punisher from One:12 Collective Marvel Universe by Mezco 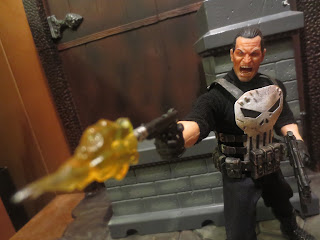 I'm always a sucker for action figures of the Punisher. What can I say? The just makes for a really cool toy. I'm pretty sure that the Toy Biz series 4 Punisher was the first Marvel Legends figure I ever bought and the Punisher was the first Marvel Select Punisher I ever bought. I've also grabbed plenty of other figures of Frank Castle over the years since I can't turn a toy of a mean guy dressed in black and sporting a whole mess of guns. When I saw that Mezco would be releasing a One:12 Collective Punisher, I knew I'd have to buy this guy. I originally planned on just picking up the Previews Exclusive version of the Punisher but after seeing a few reviews of this guy from other sources I knew I had to have him, too. He's the standard version and he just started shipping in early February. Let's check out this really cool figure after the break... 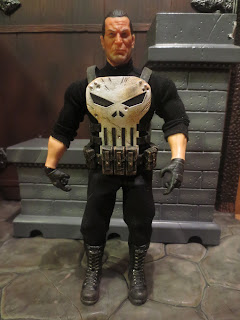 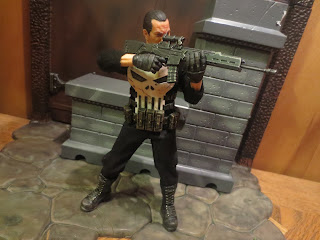 * One:12 Collective has some of the best articulation ever seen in this scale and, on Frank Castle, it's pretty uninhibited. While his torso movement is hindered a bit by his armored vest (which is removable), everything else moves freely. The firing positions you can get this madman into are unreal! Look how realistically he can hold that rifle; I love it. 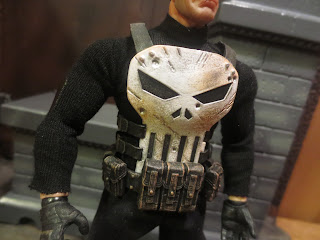 * Underneath Frank's gear, he's actually wearing a pretty basic outfit: A commando styled sweater and some pants. They're made from different materials but they're connected at the waist to prevent any weird exposure when posing this guy. I like the sleeves as they're a bit stretchy, so you can roll them up. When the Punisher rolls up his sleeves, you know someone's about to get what's coming to them. 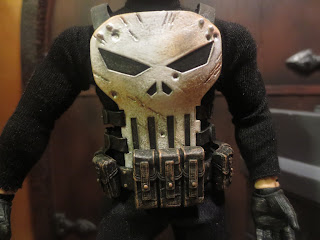 * To intimidate his foes and to keep bullets from piecing his vital organs, the Punisher is wearing a really wicked wearing armored vest. Shaped like his classic skull logo, this armored vest features a killer paint job and lots of dents, dings, and bullet holes. It looks like it's seen some combat, adding to the gritty appearance of the figure. The belt is also a separate piece that 9 nonfunctional pouches and a functional sheathe. It also has a killer paintjob that really manages to replicate the look of a distressed, leather-like material. 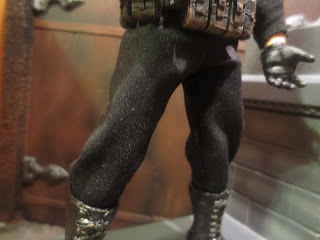 * Frank's pants are basic but, as I mentioned above, they're made of a heavier material. While they may not "feel" like pants, they certainly have a better look and feel to them. Visually, they remind me of the material you might see on BDU pants at a local military surplus store. Cargo pockets would have been really cool here, but the sleek design still works, too. 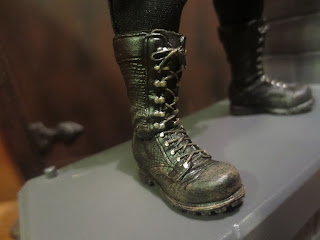 * Frank's wearing some tactical boots that look perfect. The sculpt and paint really give these a very life-like quality. Heck, the treads on the bottom are excellent, too. 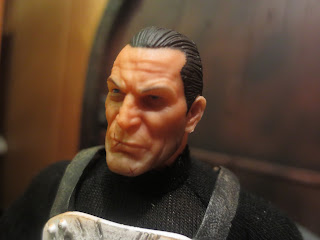 * There's no way you could look at this headsculpt and think it's anyone except Frank Castle. The slicked back hair, strong chin, steely gaze, and a laundry load of scars and cuts capture Castle's likeness. It's a blend of the best Punisher renditions you can imagine. This is the standard headsculpt and, while it shows Frank in pretty good shape, you can also see various scars and cuts all over is face. This is a guy who lives a rough lifestyle. 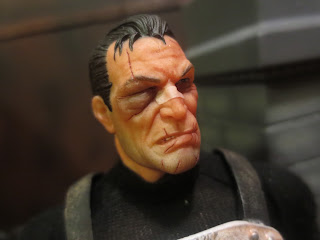 * The second head shows Frank after an altercation. He's got a bunch of cuts across his mouth, aright eye that's swollen shut, a bandage across the bridge of his nose, a few gashes on his forehead, a five o'clock shadow, and some messed up hair. This is incredible work and one of the best headsculpts I've ever seen on a figure in this scale. 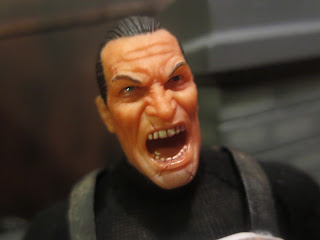 * Last, but not least, is the angry headsculpt. Capturing the Punisher right in the middle of battle, this headsculpt features a wide open mouth. What's Frank yelling? You decide! The open mouth is really well done. You can even see the separate teeth on this guy! 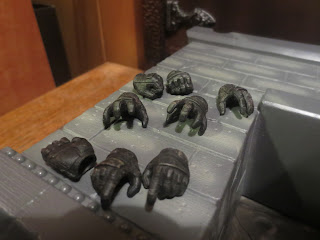 * To hold his various accessories (or to beat the tar out of various bad guys) Frank comes with 8 interchangeable hands that swap out easily. There are a pair pistol grips, a pair of grappling hands, a pair of fists, a left hand for cradling the forestock of a rifle, and a flat palmed right hand for bashing baddies in the face. 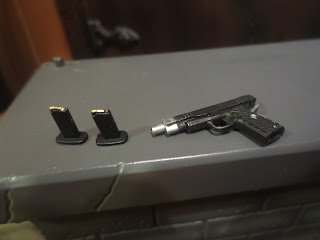 * Frank's sidearm looks like a 45 caliber pistol with a barrel extension (a 1911-A1 perhaps?). It's not only a nice sculpt with some very intricate paintwork but it also features a working slide. Yes, you can actually pose the pistol with the slide back. That's a cool feature that just seems incredible in this scale. Plus, it has a removable magazine. You actually get two magazines with this set, just in case Frank needs a backup. 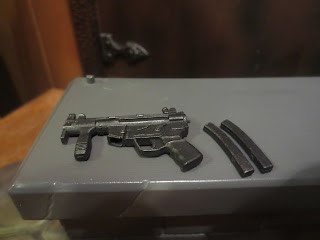 * Frank's second toy is an MP5. It also includes two magazines and features some light weathering to give it a more realistic appearance. 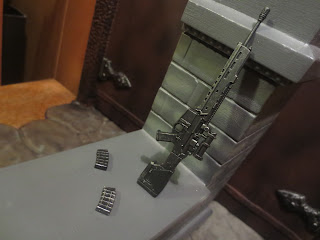 * For his third weapon, the Punisher includes a wicked looking assault rifle. It also includes two magazines and is outfitted with a scope. The drybrushing effect to give this rifle a weathered appearance is also present here and it makes this thing look darn wonderful. 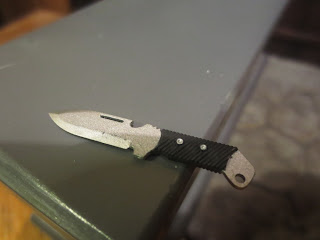 * When Frank needs to get close and dispose of some garbage quietly, he uses this effective little knife. This piece actually looks like it's made of metal with a rubberized grip, doesn't it? That's a very high quality accessory. 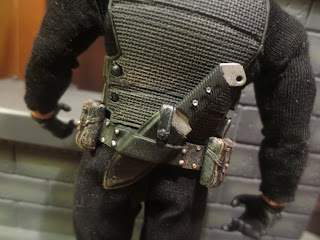 * The Punisher even comes with a functional sheathe to store his knife in when it's not in use. It fits right in the back of his belt. 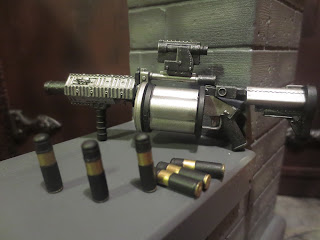 * When Frank really needs to bring the pain to the bad guys, he ca whip out this Milkor grenade launcher. This is an incredible looking MGL (Multiple Grenade Launcher) that actually features a rotating and removable drum and six 40mm grenades. 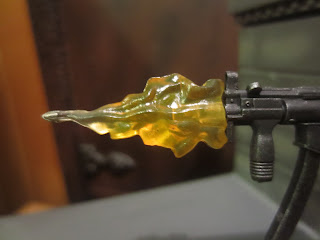 * Want to know what I think might be the coolest accessory included in this set? The firing effect shown to the left. Not only does it depict a muzzle flash from the barrel of a gun but it also features a small bullet at the end flying forward. This looks really impressive on display! It fits inside the barrel of the 45, pistol, the MP5, or the assault rifle. 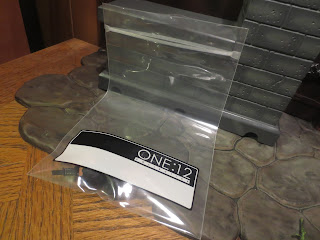 * To keep all of the little accessories and extra hands close by when not in use, Mezco also gives you a cool branded bag. It's just a simple plastic bag with a Ziploc styled bag, but it's appreciated. 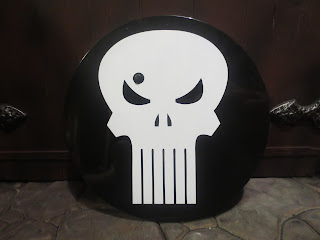 *  Like the other One:12 Collective figures, the Punisher features a round display base featuring his logo. The Punisher's skull is emblazoned on the base and an off-centered peg helps to keep the figure nice and secure when standing up. 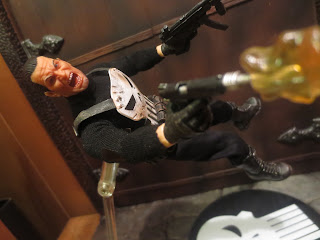 * There is also an articulated display arm that can be inserted where the peg is (you just have to remove the peg). You can get some great, secure poses here as the joints are very nice and tight on the display bar. It can absolutely support the figure's weight if you want to depict Frank leaping through the air and firing his weapons a la Max Payne. 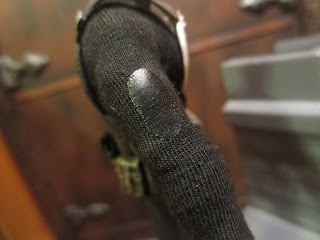 * Frank's sleeves have this weird little patch on them that I think is supposed to be an elbow pad of some sort. It looks slightly out of place, though, and I think a legit elbow pad might have looked a bit cooler. 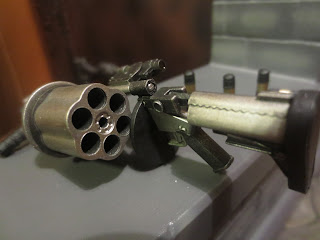 * The grenade launcher is an impressive accessory with lots of functional pieces such as the rotating cylinder, the hinged stock, and the opening body to allow inserting of the grenades. My complaint, though, is that the small peg that swivels open just really doesn't seem very sturdy. I haven't had any problems yet, but I certainly am a little nervous about the longevity of this feature. 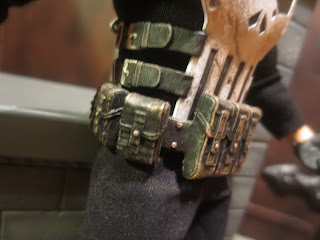 * You know what Frank's missing? A holster. Why doesn't the guy come with a holster for his pistol? That seems like quite a no-brainer. I wonder how it was neglected? 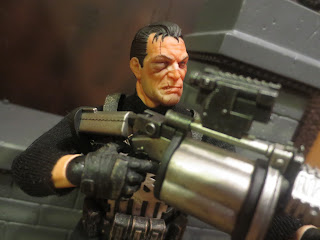 This is an Epic figure. If I were selecting my figure of the year thus far for 2017, it would be the Punisher. He's so insanely cool! The guns are impressive, the body armor and outfit are incredibly well crafted, and the headsculpt are absolutely perfect. If you're going to pick up one One:12 Collective figure, I'm not going to definitively say it should be the Punisher (because Cap, BvS Batman, and all the DKR Batmans are really, really good), but he's definitely worth considering. Amazing work here, Mezco! 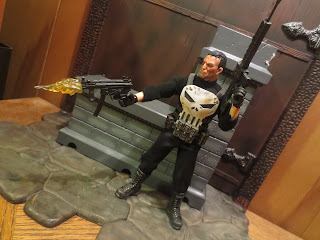 At this point, the only other Punisher figure I've reviewed on here has been the Marvel Legends Series Walgreen's exclusive The Punisher.

If you're looking for more One:12 Collective figures, check out the following: