Action Figure Review: Eldor from Masters of the Universe: The Powers of Grayskull by Super7 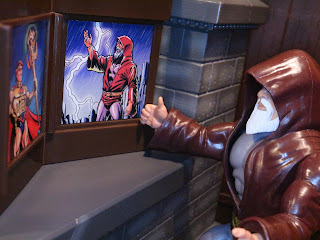 There's no denying that He-Man and the Masters of the Universe was a wildly successful property back in the early to mid 1980s. Beginning in 1982, the line grew in popularity until 1986 when the toyline was doing around $400 million in sales. Sadly, in 1987 the line dropped in sales. Despite the release of the live action film that year the line dropped to around $7 million in sales, causing Mattel to scrap plans for the next planned expansion: The Powers of Grayskull. Mattel's plan for the future of Masters of the Universe was to go back in time to Preternia, Eternia's ancient past filled with wizards and dinosaurs. The new main hero of this series would be, well He-Ro, a powerful wizard. It's interesting that Mattel went backwards, attempting to do the prequel thing before pretty much anyone else. While Mattel did limited releases of the three dinosaurs from the line and the two giants (released only in Italy), the figures were scrapped. For a number of years now fans have know about Mattel's planned figures for He-Ro and Eldor. The two characters were released in Masters of the Universe Classics but fans of the vintage line would always have an empty spot on the shelf where these two characters should have been...until now! As part of their mass amount of MOTU product Super7 has done a remarkable job of finally getting these never before produced vintage prototypes out to collectors as legitimate figures. Let's start with Eldor, the Heroic Guardian of the Book of Living Spells, after the break... 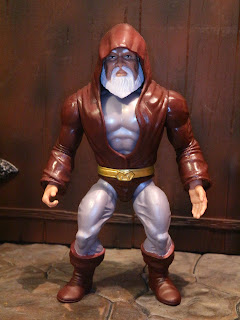 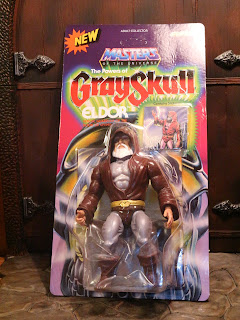 
* While it is not collector friendly (there's no way to get this figure out of the package without utterly destroying it) it is gorgeous. I never keep figures in the package but I was so, so darn tempted to do so here! While we do have actual samples of the vintage packaging to go off of Super7 still did an excellent job of recreating the proposed look. If you do keep figures carded this is a very, very attractive figure for your collection. 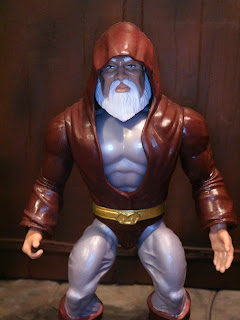 * Eldor! Perhaps the biggest positive here is that Super7 is delivering a figure that collectors have desperately wanted for decades. Super7 released a figure that looks very faithful to prototype images of the toy. One of the things I really like about Eldor is that he gives the MOTU toyline an elderly wizard, something that is definitely one of the main fantasy archetypes. The brown cloak definitely feels like something out of a barbarian fantasy tale (or Star Wars) but it also still has the traditional MOTU build. Yup, Eldor's ripped underneath that hoodie. The quality of the sculpt falls in line with figures from MOTU's 1986 offerings and shows how the line was evolving over time. It seems that Super7's Eldor is a good bit taller than the original vintage offering would have been, but I don't find that to be a problem. 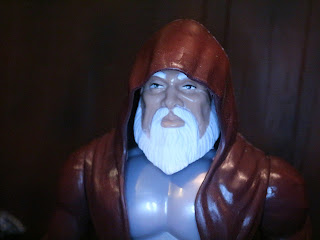 * Eldor follows in the tradition of magical men with long white bears such as Merlin, Gandalf the White, Santa Claus, and Kenny Rogers (if you remember his chicken then you know what I'm talking about) so there's nothing too unusual here. What's cool, although you can't see it in the picture here, is that Eldor has a small metal helmet underneath. His head can turn a bit, although the hood restricts most of the movement. 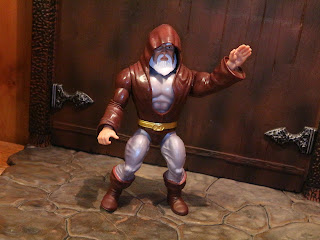 * While the hips are designed with more modern swivel/hinge joints Eldor very much feels like a vintage Masters of the Universe figure from the later years of the line. He also moves like one with his swivel joints. Interestingly, he also has swivel wrists which was a bit unusual for the line (Gwildor had them, too). The back of the packaging implied they were to help him hold his Book of Living Spells. That doesn't completely pan out (you'll see below) but it does allow him to make some cool spell casting poses. 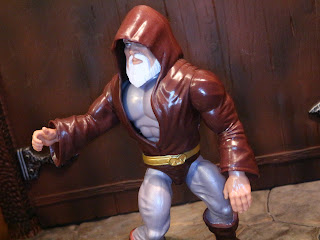 * Like most of the classic MOTU figures and Super7's Filmation inspired neo-vintage releases, Eldor has a spring-loaded waist that allows him to throw a punch or cast a magic spell. I always get a kick out of this feature and I'm glad Super7 is still including it! 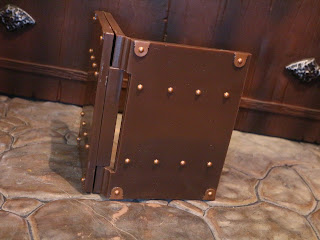 * Eldor's accessory is called the Book of Living Spells. Apparently this was going to be a major artifact in The Powers of Grayskull. It's an interesting piece that opens at two separate parts to showcase four different "Living Spells" within. It's more like a portfolio rather than a book, but it does have a cool magical, swords and sorcery inspired vibe to it. 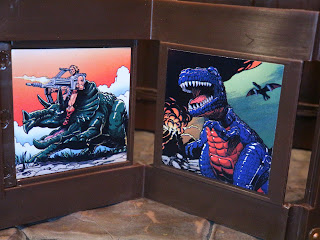 * The figure comes with four stickers that you apply within the book. The stickers, newly illustrated by Emiliano Santalucia, show pictures of Eldor, He-Ro, Bionatops, and Tyrantisaurus Rex and take the place of the holographic "Living Spells" that the vintage figures would have included. Apparently making holograms is legitimately expensive, so this was a cost cutting measure. Interesting, isn't it? 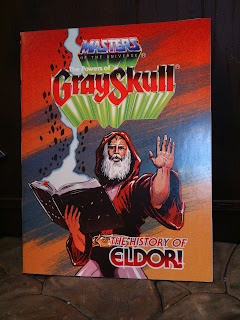 * You know what one of the coolest parts of this figure is? This miniature book about the history of the Eldor character included within the figure that showcases concept art and photographs from The Power and Honor Foundation. Written by Emiliano Santalucia and James Eatock, this is a really cool 14 page book that is filled with coolness. It's very reminiscent of the excellent art book that The Power and Honor Foundation put out a number of years ago and it really adds value to the figure. 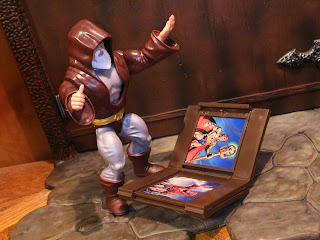 * I like the Book of Living Spells but there is no way that Eldor can actually hold it. It's just too darn big. Honestly, I think I would have rather Eldor could have actually been able to hold the book than to have the book open in a tri-fold manner like the vintage toy. It's a bit frustrating, really. 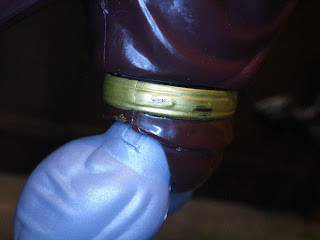 * Overall Eldor's quality control is excellent but there are some areas of paint slop around the belt. Some of the belt's gold paint has ended up on Eldor's robe while areas of the belt have missing paint. 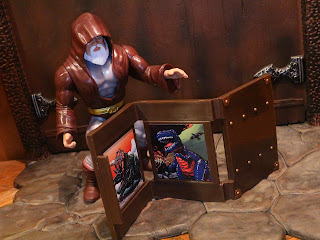 Super7 did an excellent job of finally releasing Eldor to MOTU fans. If I were judging the overall quality of Super7's efforts in producing Eldor and the work of The Power and Honor Foundation in providing information about the figure, I'd give highest marks. For Eldor as a figure, though, well, he gets a Good and a 1/2. I like him but he's not the most exciting toy out there. I kind of feel like if he'd been released in the vintage line he might have been a peg-warmer. Still, he's a cool character and definitely a near addition to any Masters of the Universe collection. Whether you keep him carded or loose Eldor is a magical addition to the MOTU world.

This is the first Eldor figure I've reviewed on the site. I skipped reviewing the MOTUC Eldor for some reason.
Posted by Barbecue17 at 6/09/2019