Minifigure Review: Skeletor (Blue) from Masters of the Universe Micro Vinyl by Super7

A little over a week ago I reviewed Super7's Micro Vinyl He-Man they sold at the Five Points Festival and now I'm checking out his arch-nemesis: Skeletor! Both He-Man and Skeletor were available in either blue or orange so rather than buying one of each (these guys were a tad pricey at $10 each) I went with an orange He-Man and a blue Skeletor. Blue just seemed more fitting for Skeletor, you know? I don't own many Japanese vinyl toys of this sort so getting these two guys in the mail definitely added something a but unique to my collection. Let's check out this miniature Skeletor after the break...

* Skeletor is a soft, hollow vinyl figure with a rather interesting feel to him. It's tough to compare him to something but I guess I'd compare his texture to those cool Mold-a-Rama wax statues that used to come out of machines. Skeletor's all plastic, though, and his sculpt is quite sharp. He's not as shiny as He-Man, so you can make out the details a bit better. 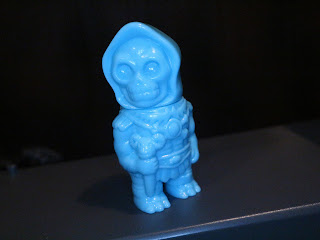 The proportions are exaggerated a bit but all of the details from the vintage toy seem to be here: The bones on his armor, weird frills on his arms, and he's carrying his Havoc Staff in his right hand. He's definitely different than a M.U.S.C.L.E. figure which, for me, is the gold standard for minifigures. He's still cool, though, and adds something unique to your Skeletor collection (I'm assuming you have a Skeletor collection if you read this website). He's a Good and a 1/2 minifigure and a fun find, although he seems to be long sold out by this point. The orange one is still available, though, as of this writing.