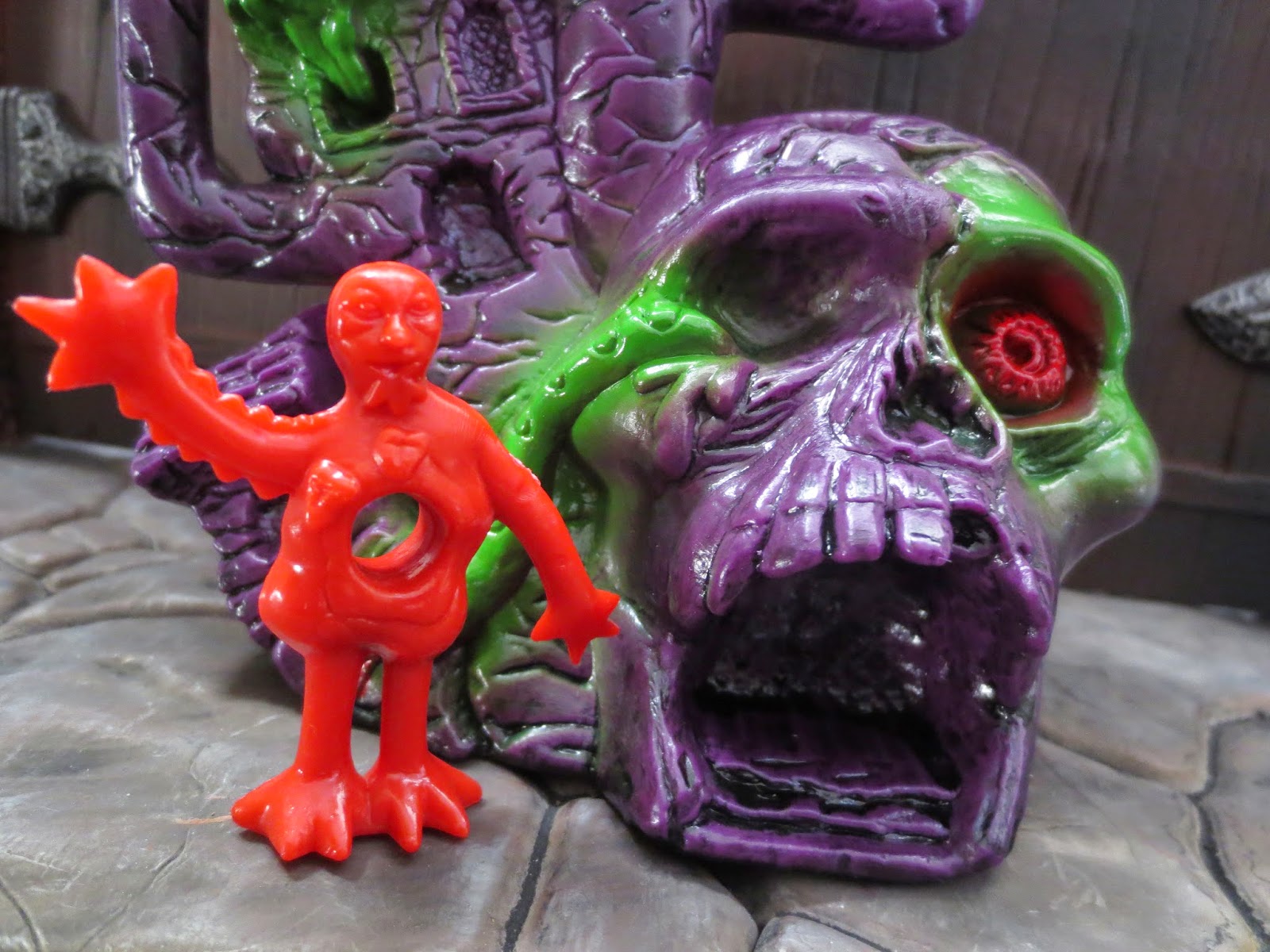 Two of my favorite things about action figure blogging are showing off my collection and looking at the toy acquisitions of others. One of my favorites is Robot Monster Space Super Hero, the blog of collector extraordinaire John Gaither. There have been quite a few times when I've been on John's site and decided that I too had to own something he was showing off. This happened again a week or two ago when John showed off this really bizarre bucket of plastic monsters minifigures, simply titled Monsters. As soon as I saw this incredibly bizarre set of plastic army men like monsters, I knew I had to have it. What a weird set? It was pretty cheap on Amazon and snagged it as soon as I finished reading John's coverage of the toy. This reminds me of some toy that would have existed in the 1980s that maybe I found used at a garage sale or that an older cousin or neighbor would have had but wouldn't known anything about. It feels too wonderfully otherworldly and strange to be something that I could have bought at a regular store; it needs to have an aura of mystery about it. Anyways, I'm going to cover this awesomely odd set and give my thoughts on it too! Ready for some Monsters? Then join me after the break... 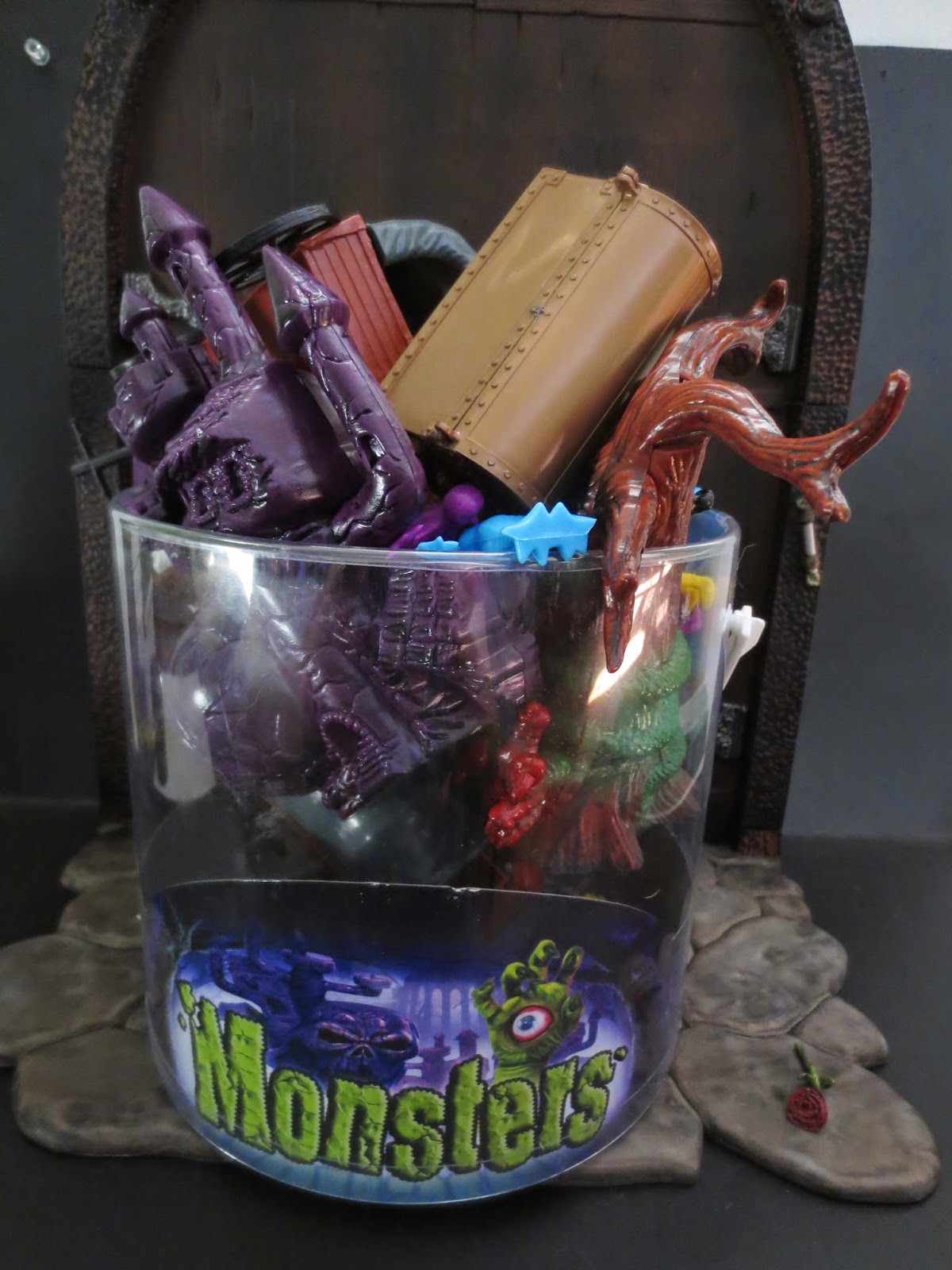 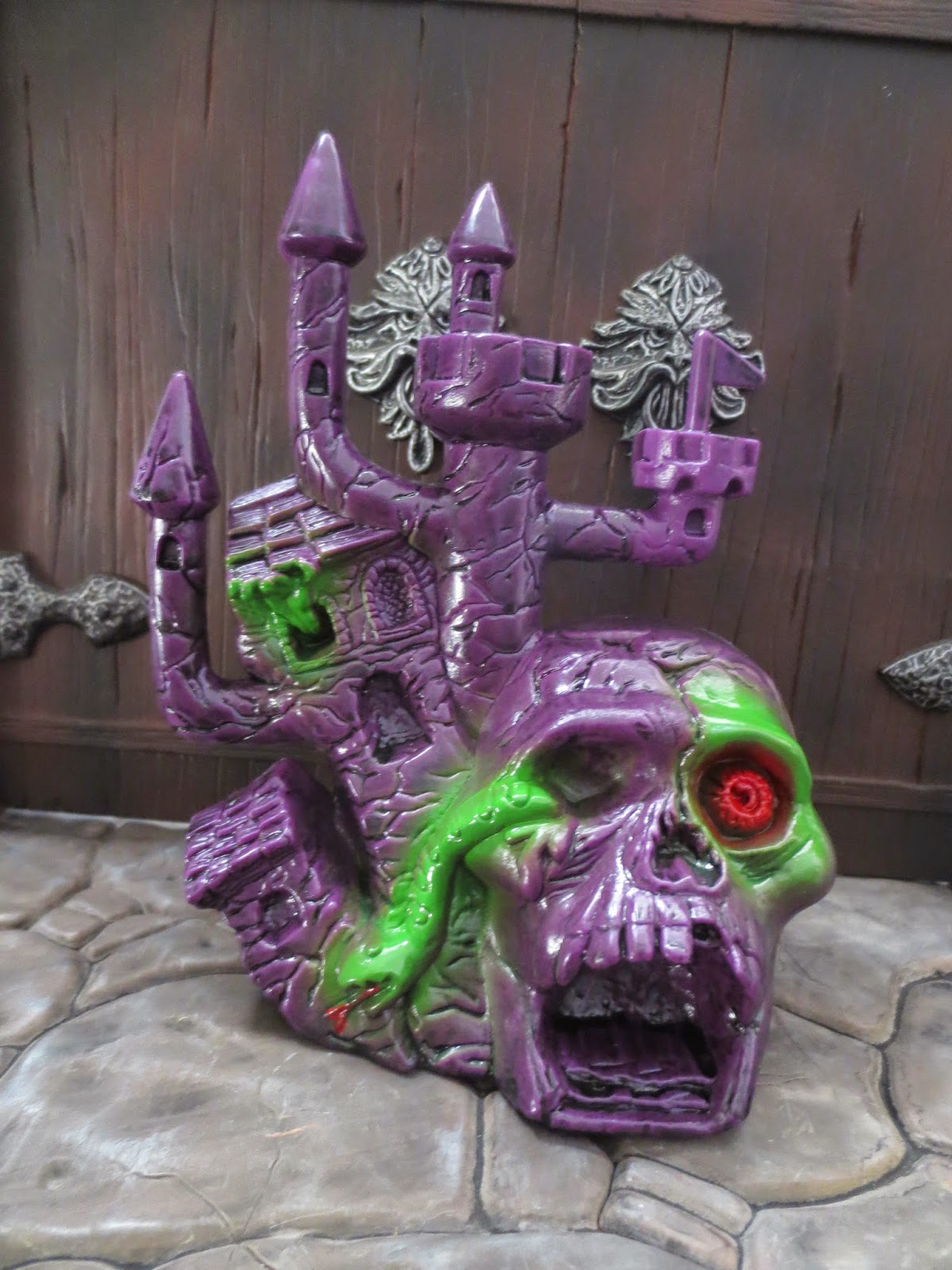 The Castle: Oh my gosh! This thing is so wicked cool! It's around 6 inches tall and looks like it could make a decent Mighty Max playset. It doesn't open or anything (it also feels a little brittle) but the sculpt is insane. I love the giant skull with the snake coming out if it and the plants growing out of the third story window. This sucker has a lot of potential for display. 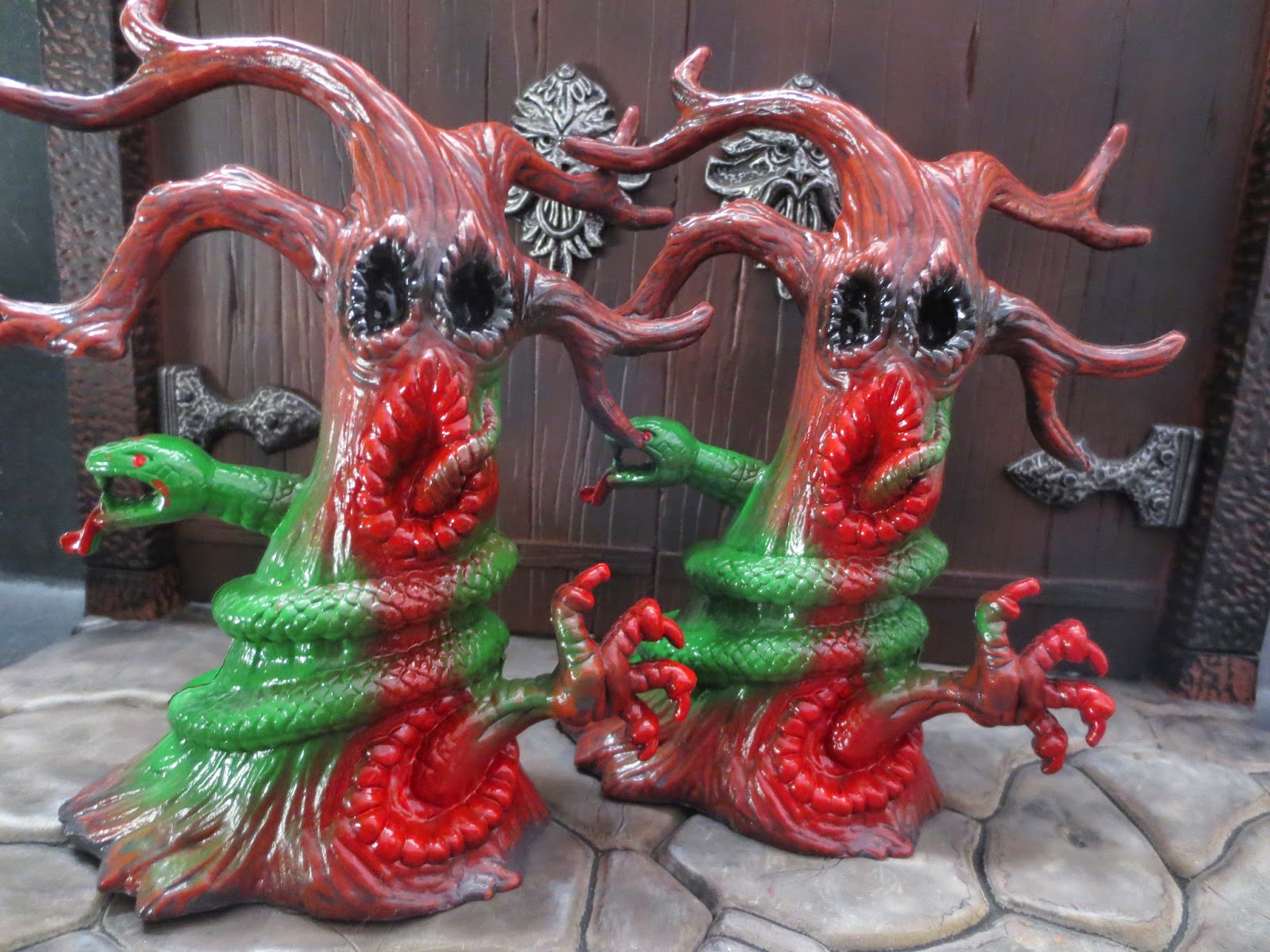 The Haunted Trees: You get two of these in the set and they're each about 5 3/4 inches tall. These aren't just spooky trees with gnarled limbs but full blown Haunted Trees. Hollow eyes, a giant bloody claw springing up from the roots, and a giant snake coming out of the mouth and coiled around the trunk. They remind me of something from the old NES game Monster Party! Between this and the Tree Warrior from Total Legends, this has been a relatively good couple of years for Haunted Trees. 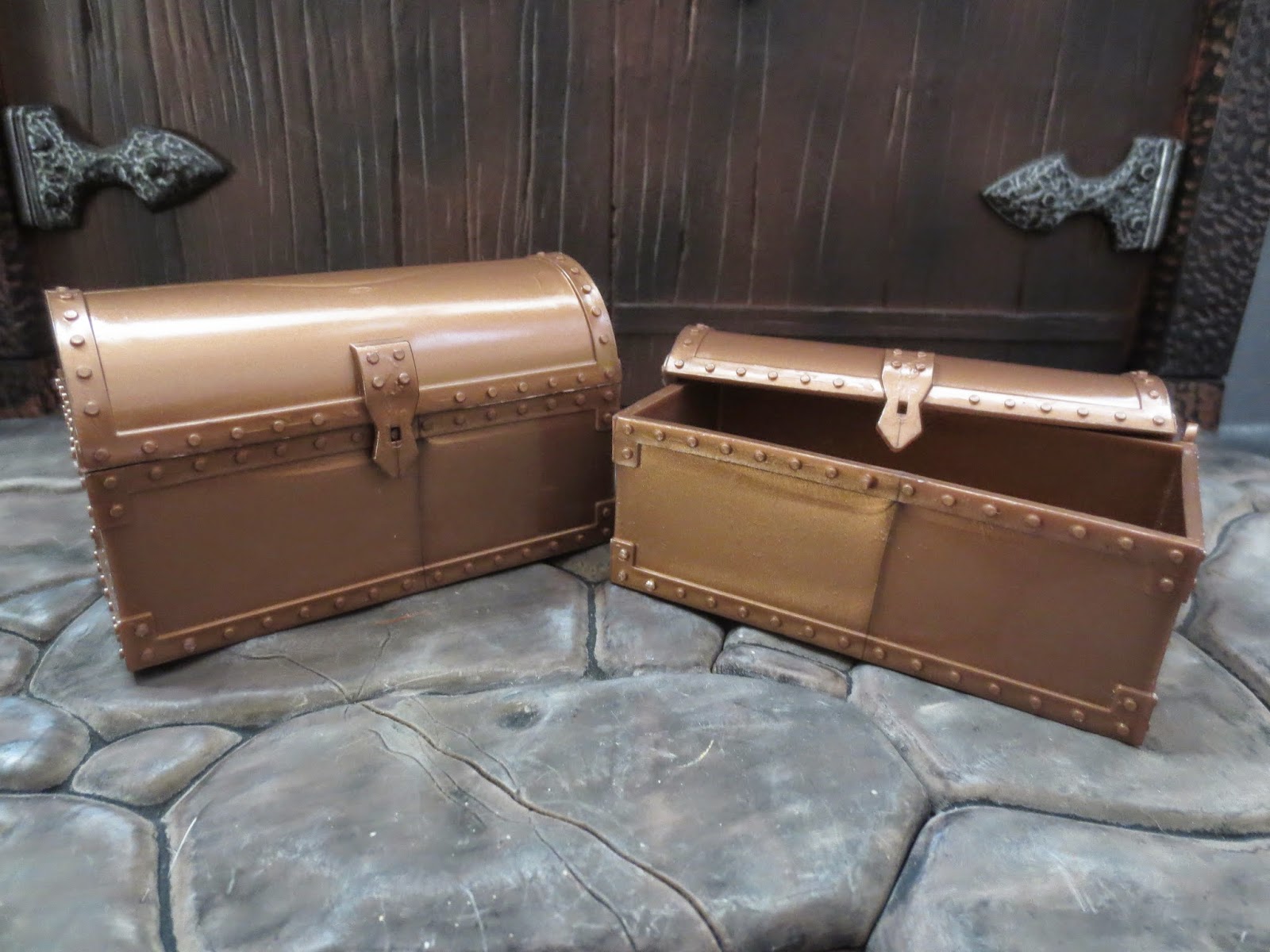 The Chests: To some these might feel out of place but to someone who knows monsters like me, these make a lot of sense: Monsters love treasure. They totally do and Hing Fat toys gave them these chests to indulge them. They're cast in a nice bronze colored plastic that looks really classy. They're large enough to hold some of the minifigures or be used by other larger action figures although the hinges are broken off on mine. This seems to be a common problem. Oh well, it's the only breakage that I experienced. 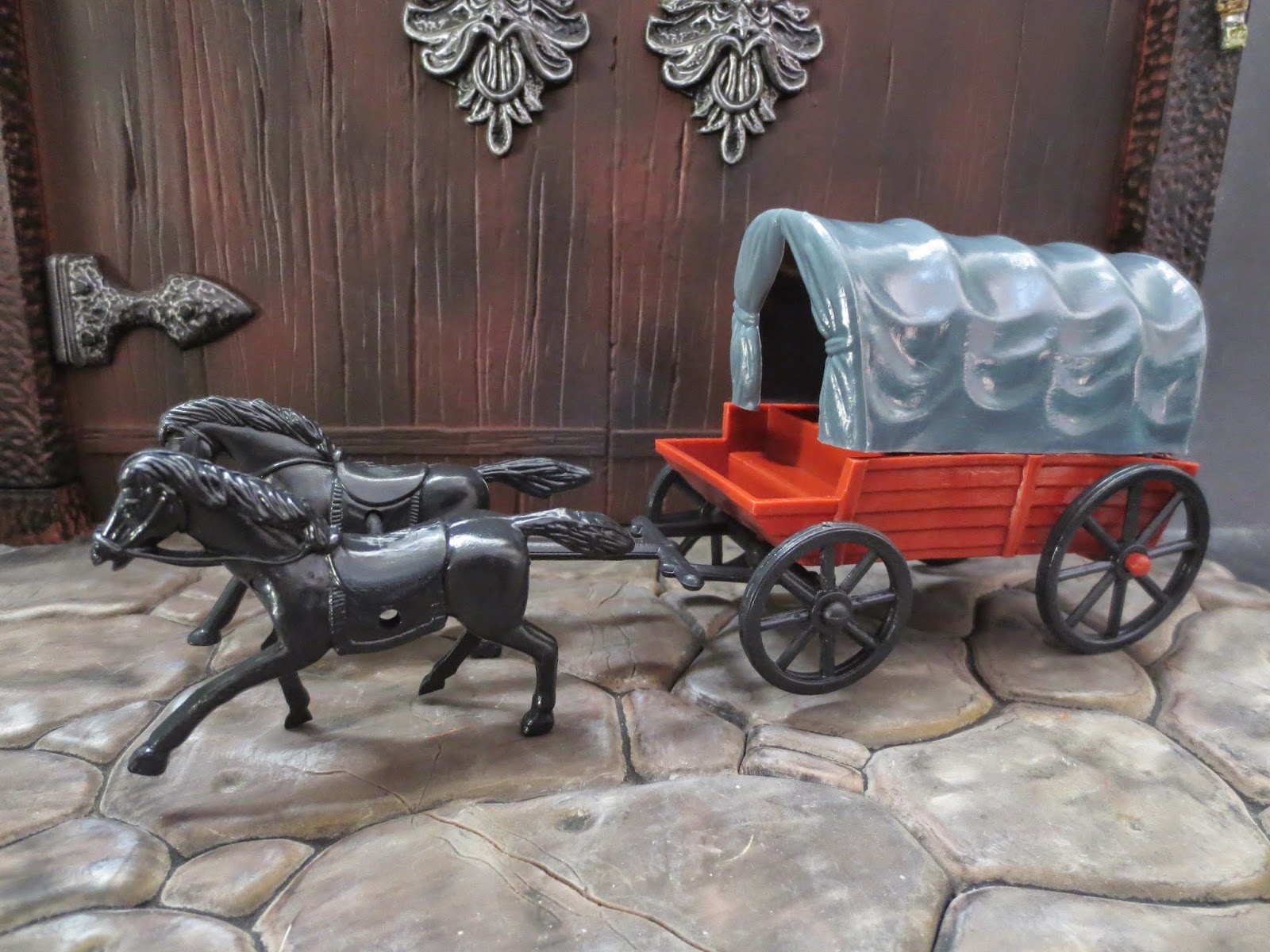 Covered Wagons with Horses: Here's another monster fact: Phantom horses and covered wagons are flippin' creepy. Yeah, I said it. These were probably originally created for a Western play set but have been cast in darker colors. The all black horses snap onto the reins and can pull any monsters around who hate walking. If  had to guess, I'd wager that these are intended to represent regular old covered wagons and not the better designed Conestoga wagons.

Now...onto the monsters! These guys have no names, so I'm giving them names. I love doing this because it makes me feel like the writer of the instruction booklet for a Nintendo game. I get to look at random characters and create names and personalities for them! 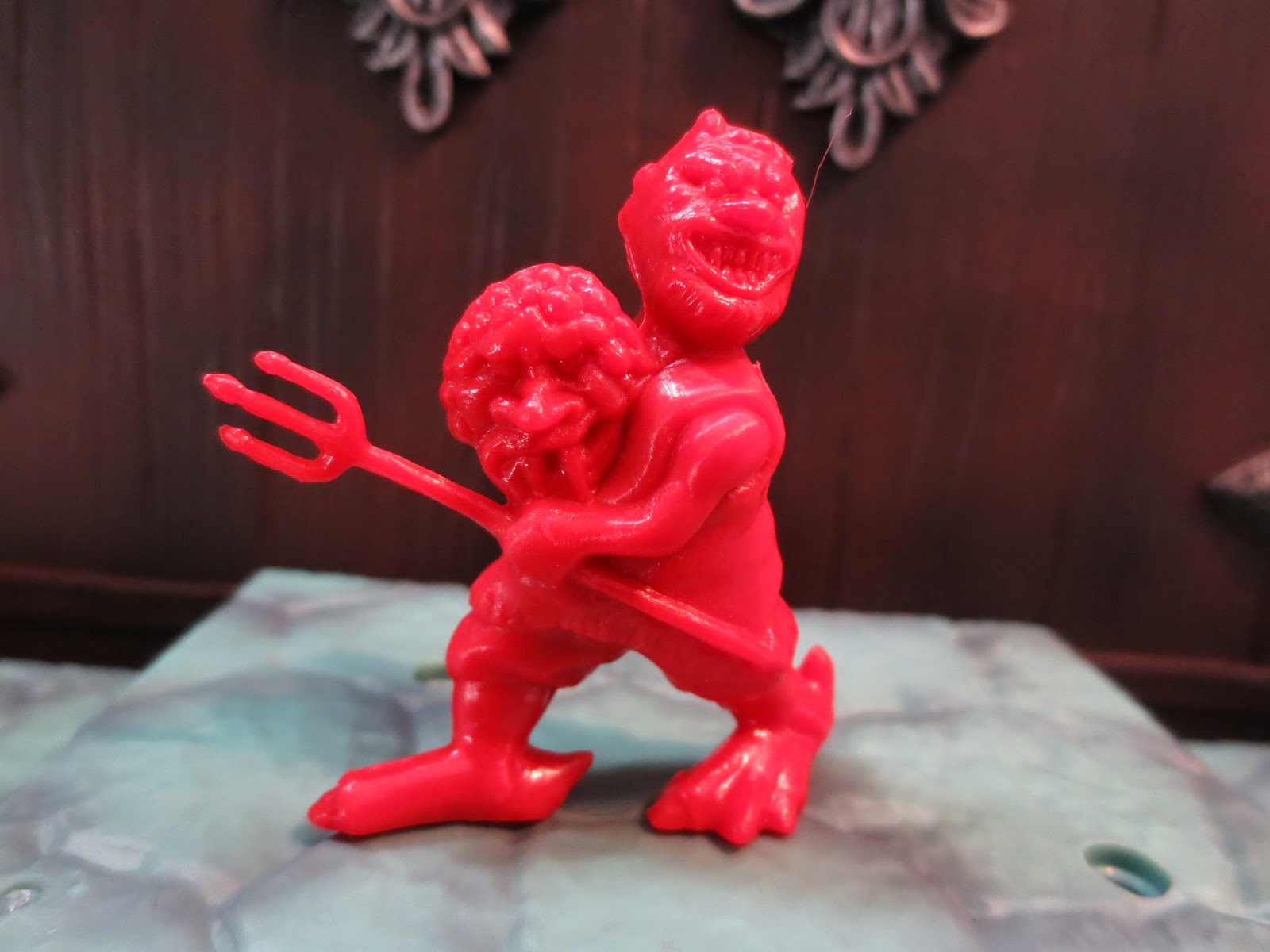 Twinevil: This is a nasty little imp clad in a burlap sack who carries a pitchfork and probably eats babies. He's not really two headed, though: His second head is actually an elaborate shield. He has trouble standing on his hooked claws and is prone to fall over. My set came with five Twinevils in purple, yellow, and red. 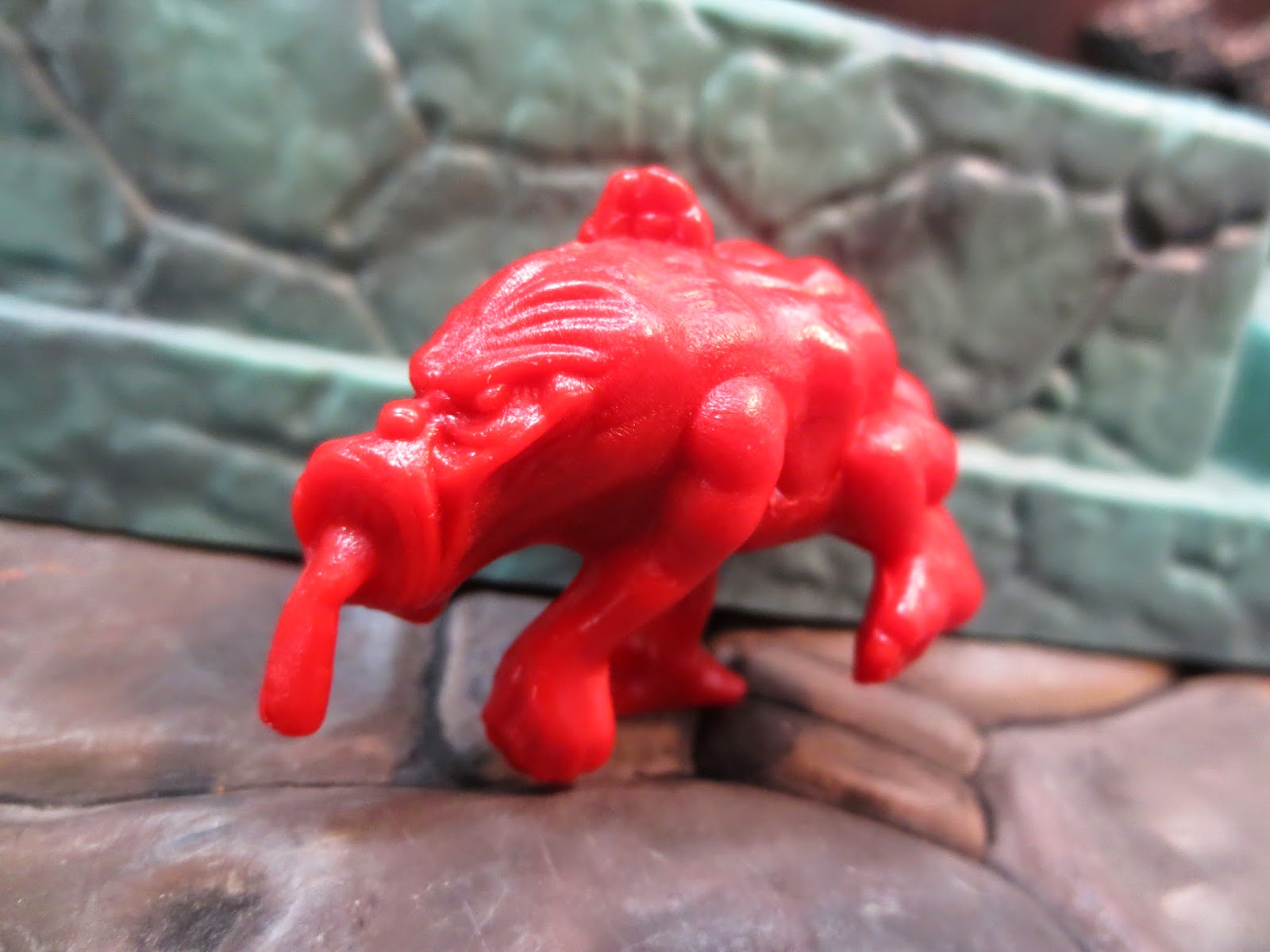 Soul Licker: Soul Lickers are nasty demon dogs that kind of look like Pooch from Hack/Slash. They're long tongues can pierce through human flesh and they're bile-green urine can kill grass like nobody's business. They're extremely muscular and can pounce on their prey with ease. They're tough to stand up as they tend to balance on one leg. My set came with three Soul Lickers in red and purple. 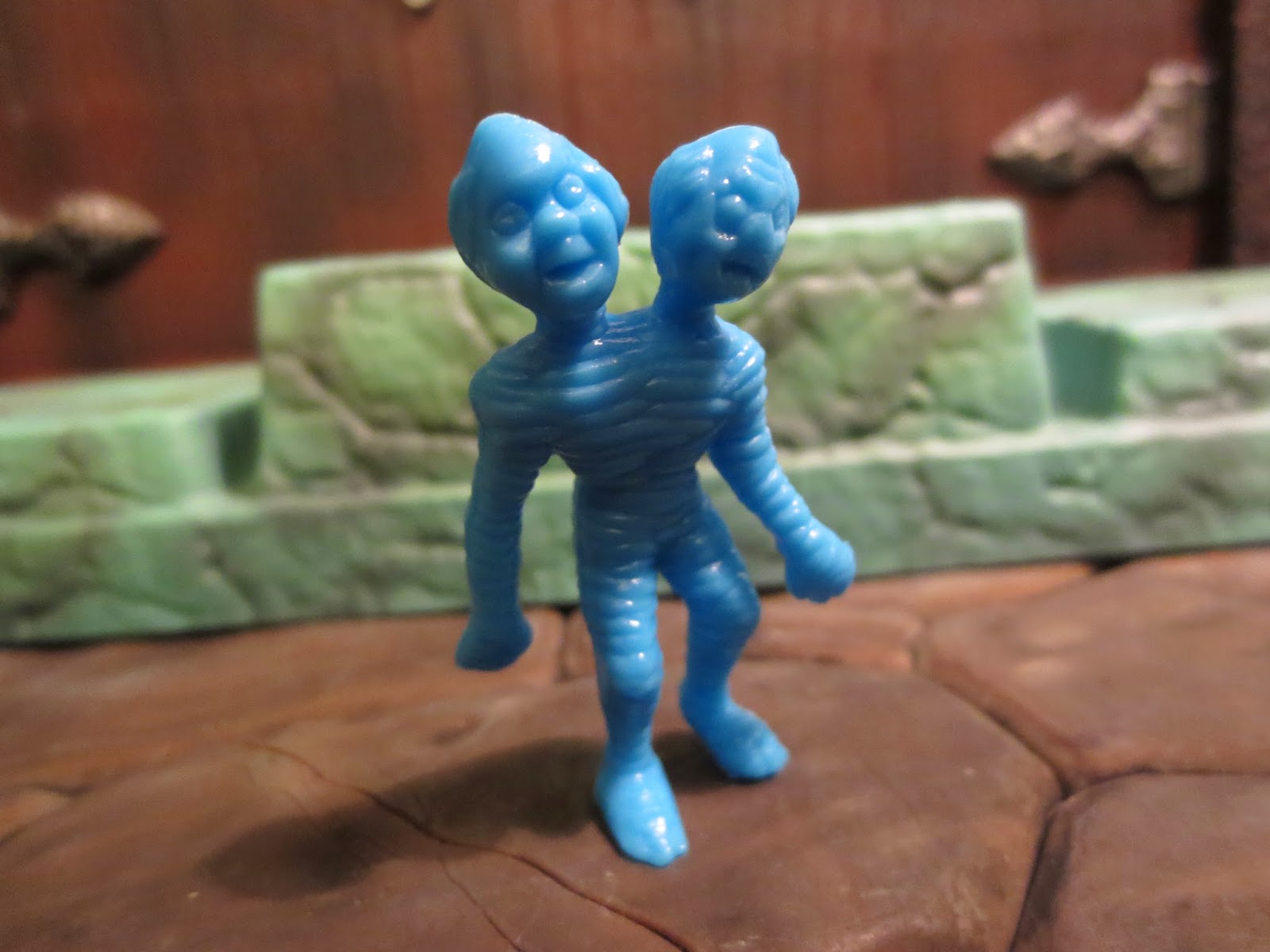 Two-Ply: These two headed mummies don't do much of anything. They stand around and walk slowly after their victims. They hate fire! My set came with four Two-Ply molded in blue, yellow, and red. 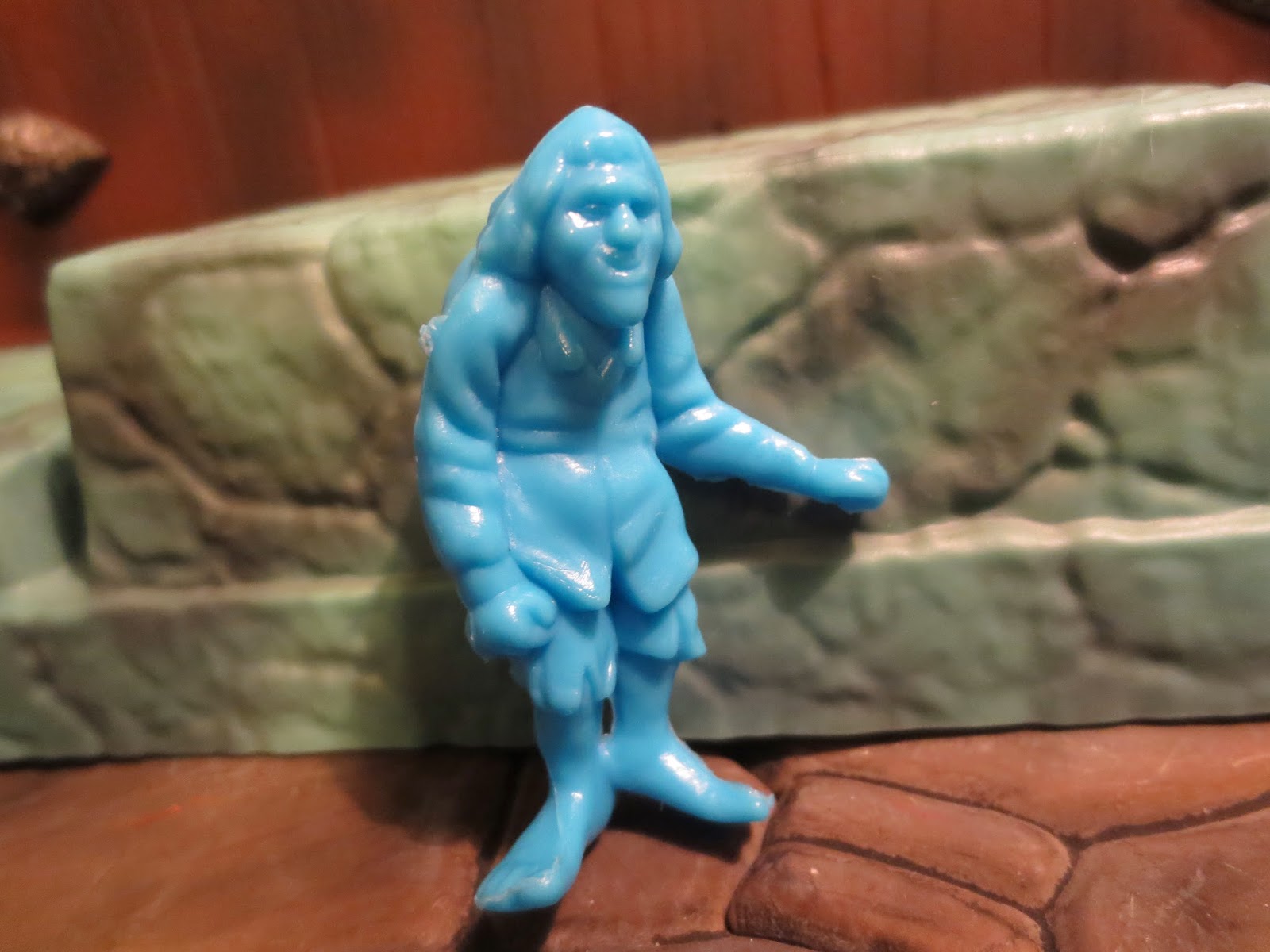 Golmodo: Looking like a blend between the Golem and Quasimodo, these guys serve as the groundskeepers for the evil monsters' castle. Due to their awkward stances they're easily knocked down. In fact, they can't really even stand up! My set came with five Golmodo molded in red, blue, purple, and yellow. 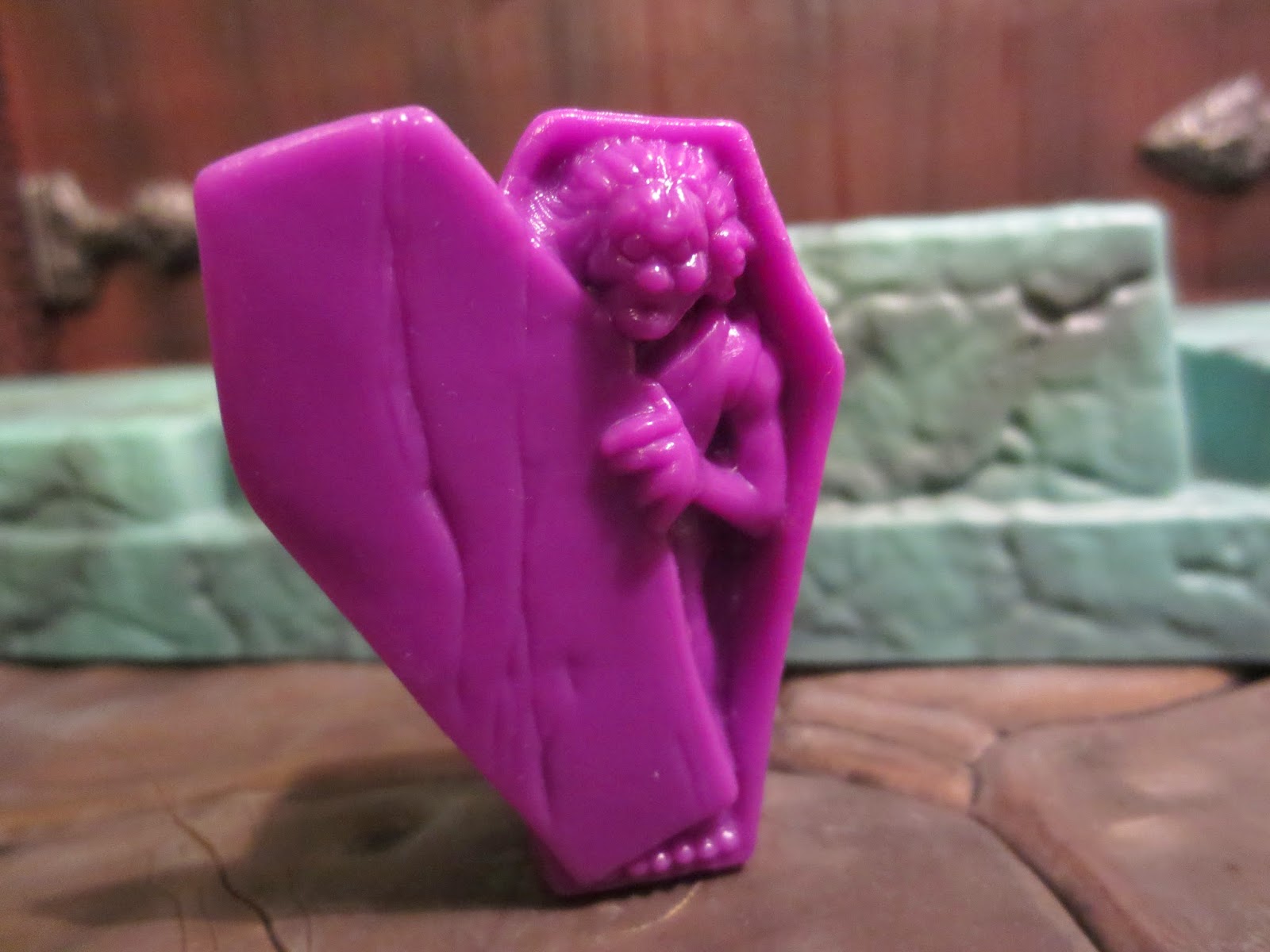 Wake: Wake is a restless corpse who lies in it's coffin in wait for unaware passersby. Their bloodcurdling screams stun their victims while their long, overgrown nails help them to latch on to fleeing prey. They can be found with their caskets stood up or flat on the ground. My set came with 12 Wakes molded in red, blue, and purple. 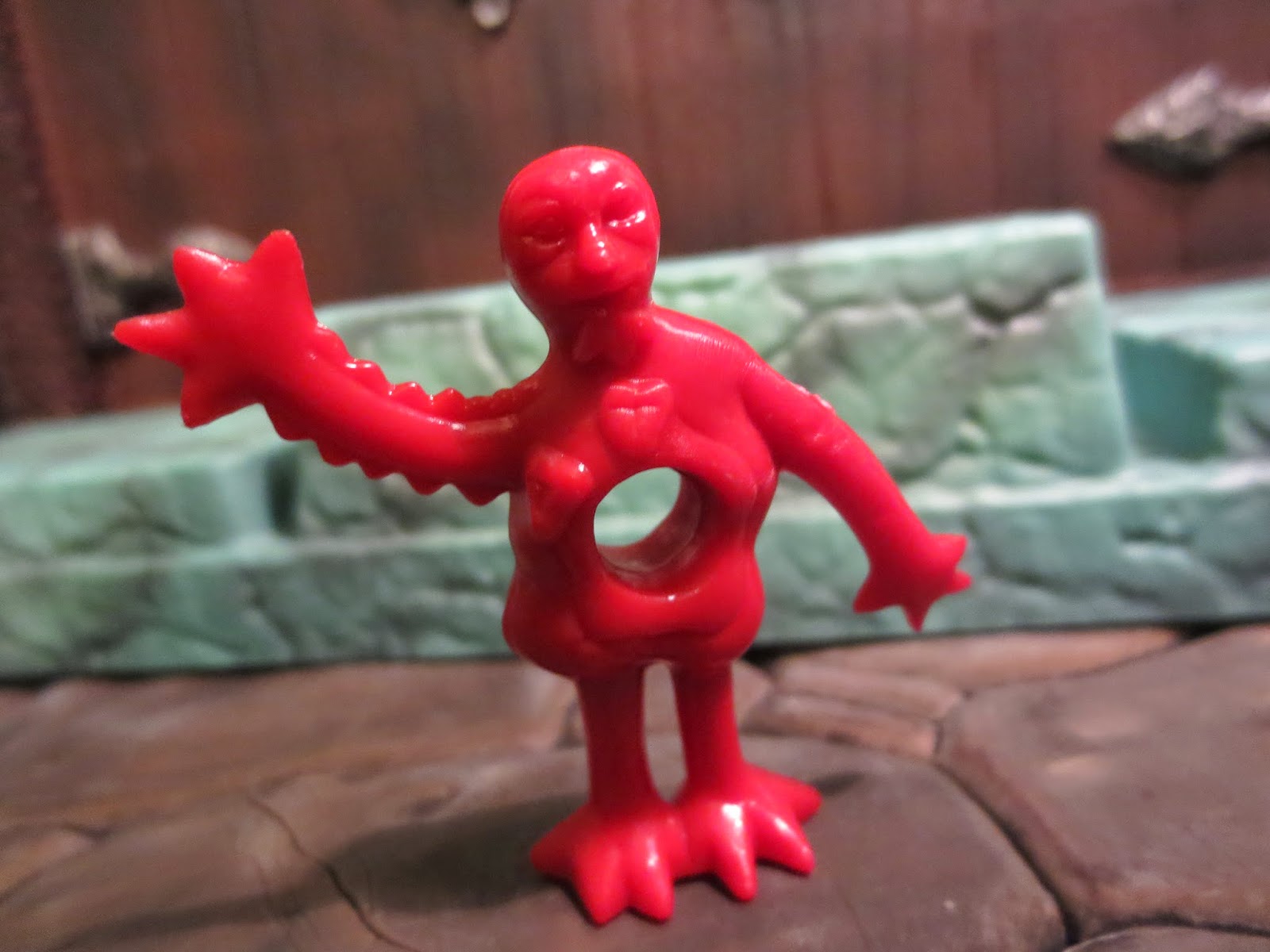 Rottster: These human/ chicken genetic experiments gone wrong have been brought back to life by dark magic. Now as rotting corpses they terrorize the nearby villages, attempting to lick the fingers of their victims. With one arm covered in sharp blades and a giant hole in their chests, Rottsters must feed off of the life of their victims in order to stave off their own decaying demises! My set came with five Rottsters molded in purple, yellow, blue, and red. 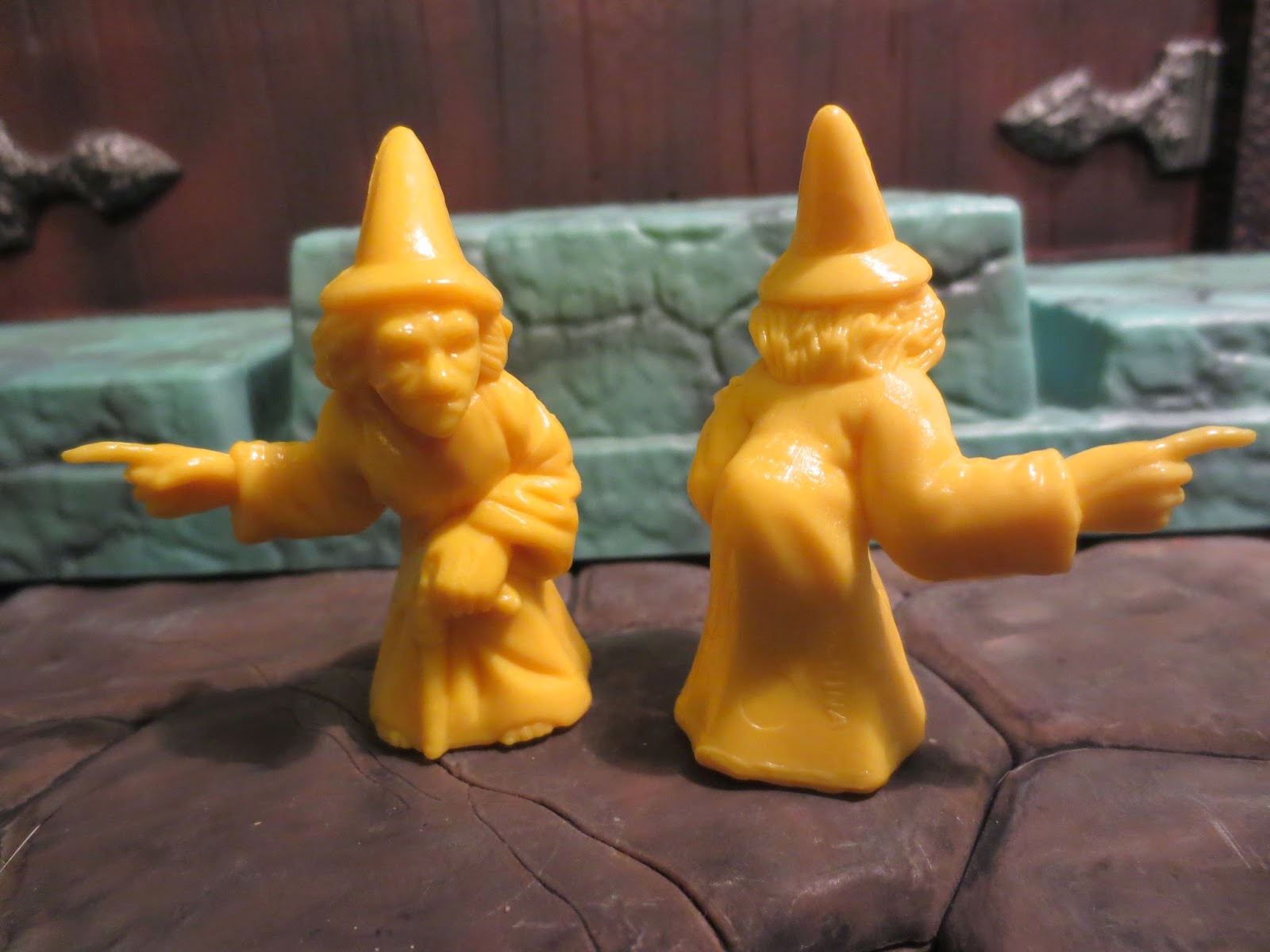 Backmagic: Backmagics are evil witches that look pretty normal from the front. Turn them around, however, and you'll see some serious junk in the trunk happening! My set came with four Backmagics molded in yellow and red. 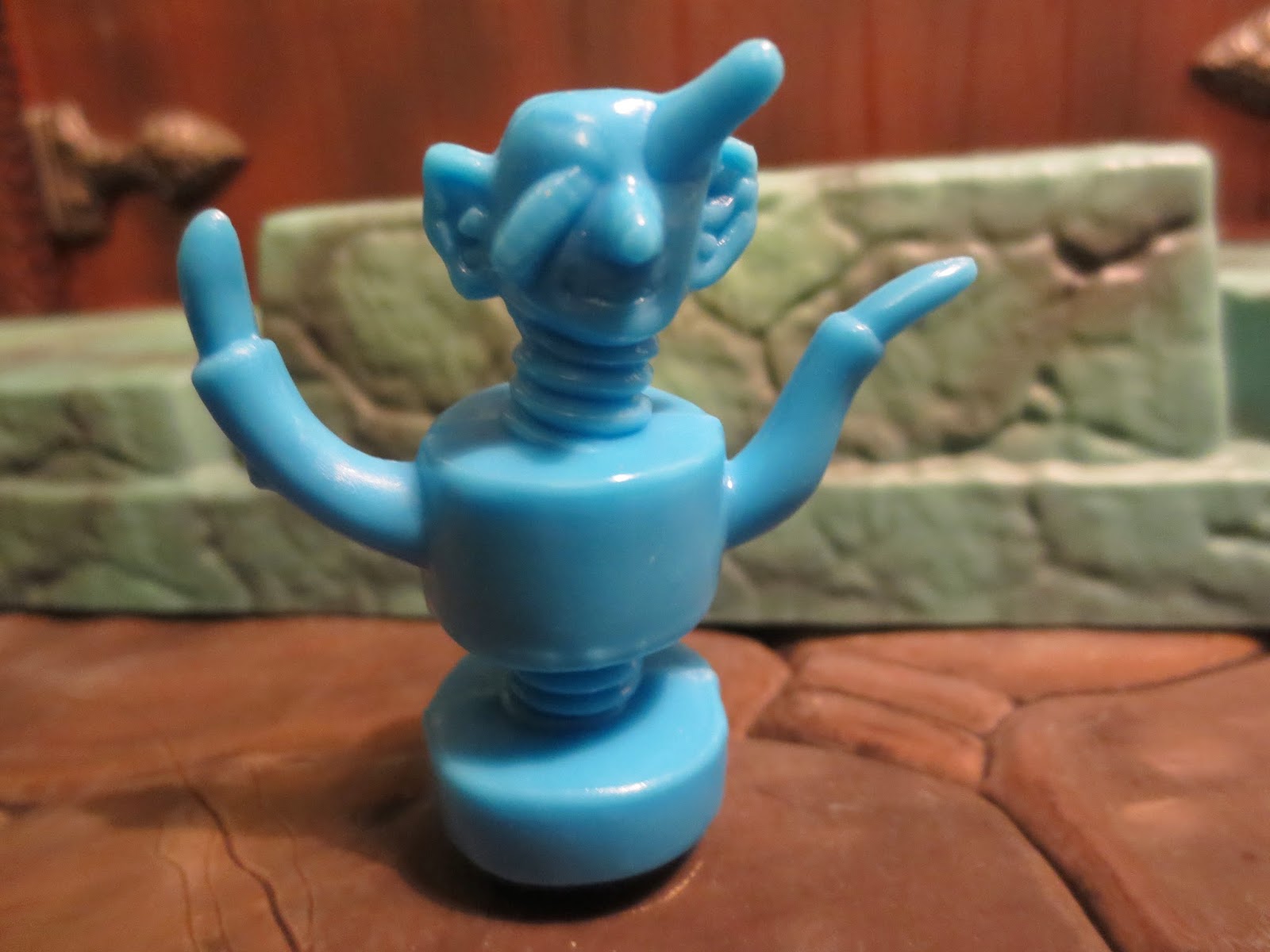 Screamnuts: The internal workings of the evil castle have come to life! Screamnuts are living mechanical and electrical beings that can power a variety of traps and dark machinery. My set came with five Screamnuts molded in yellow, purple, blue, and red. 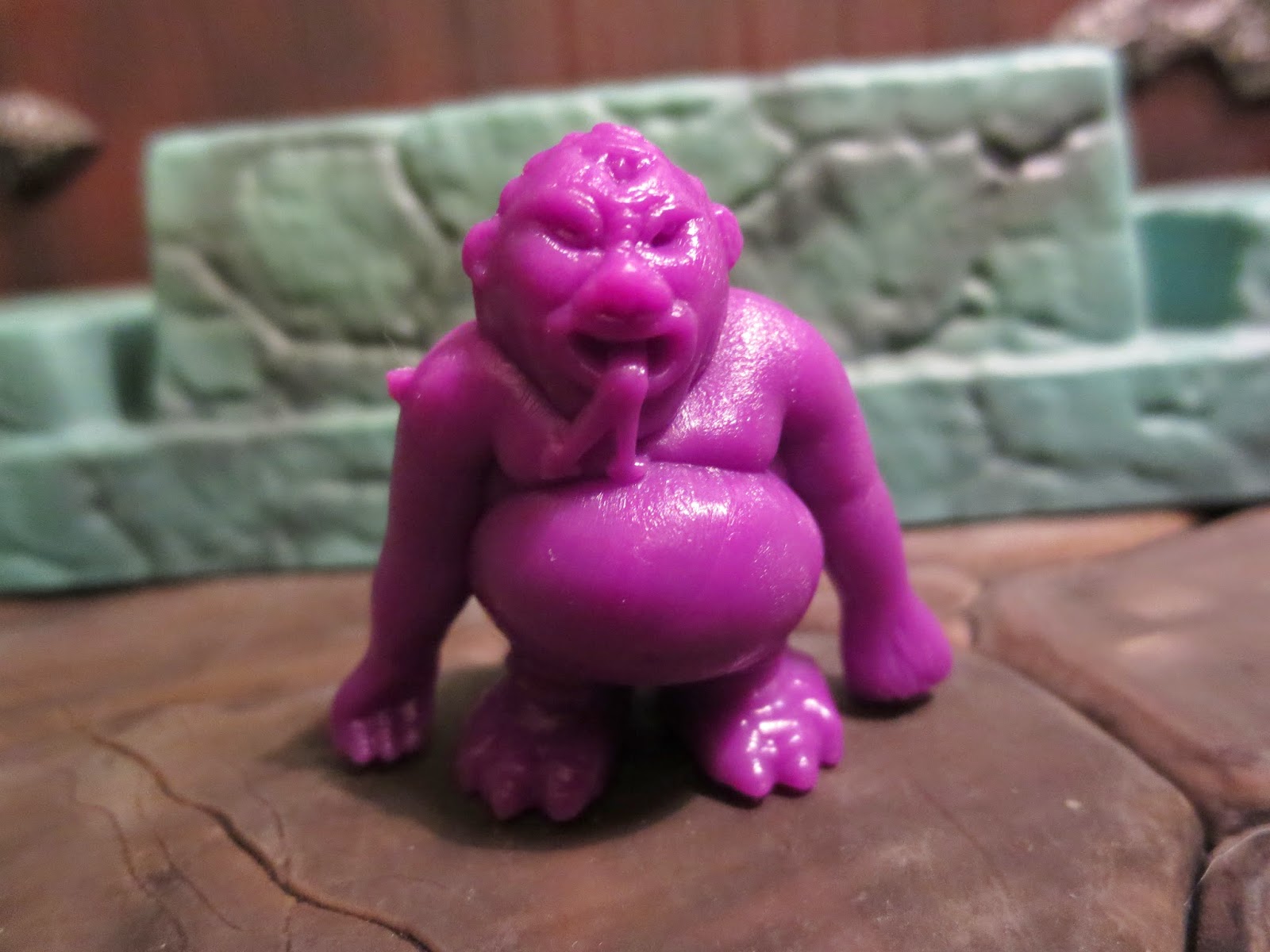 The Fappener: This naked, forked tongue creature wanders around spying on people through their windows. He has long arms and unnaturally hair hands and palms. Don't get caught by the Fappener! My set only came with one Fappener molded in purple. 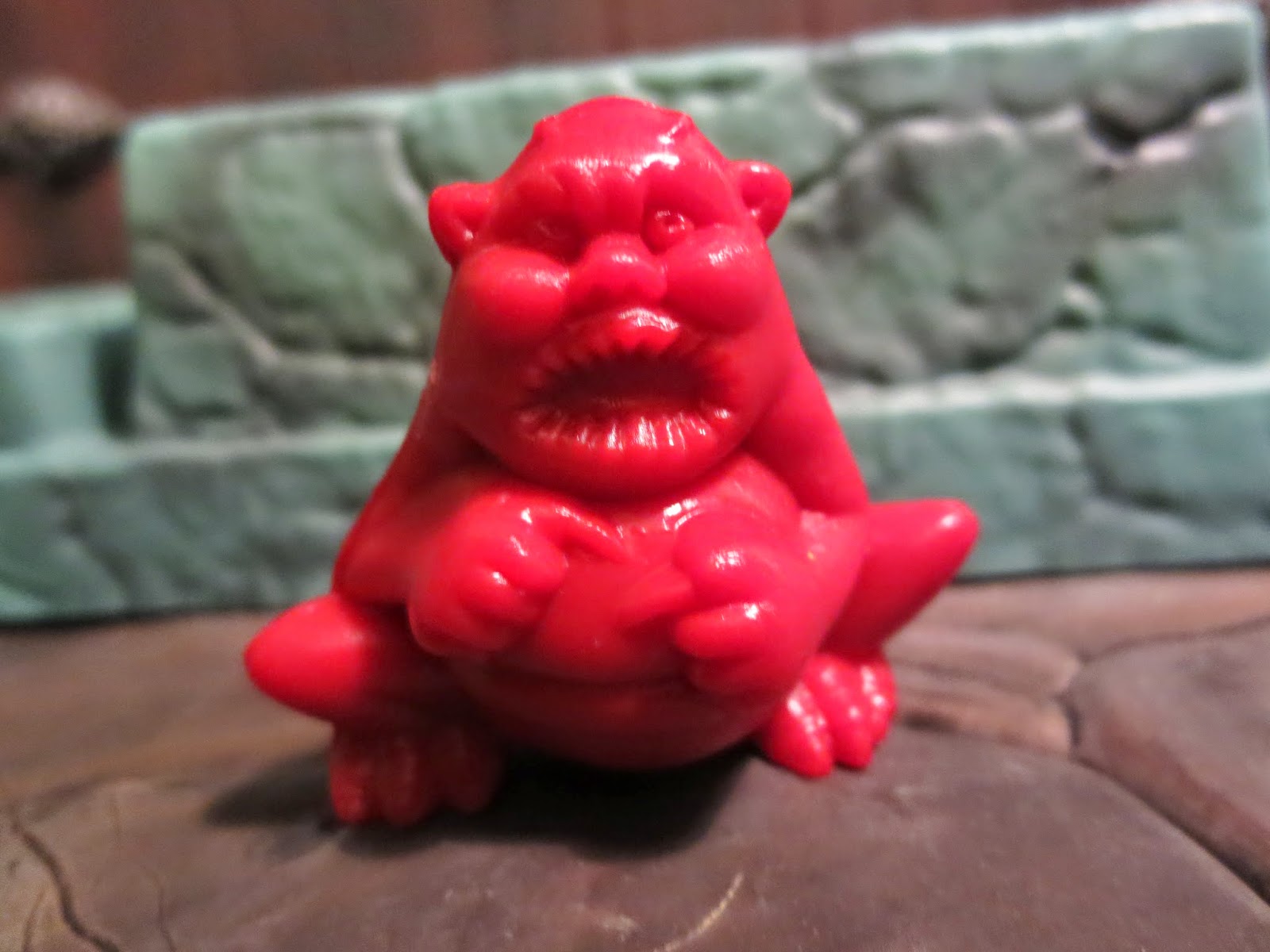 Big Boglins: These guys are reminiscent of Boglins! Their legs can barely support their slovenly bodies and so they waddle around looking for easy prey. They most often devour corpses and pilfer through garbage cans. My set came with three Big Boglins in red, yellow, and blue. 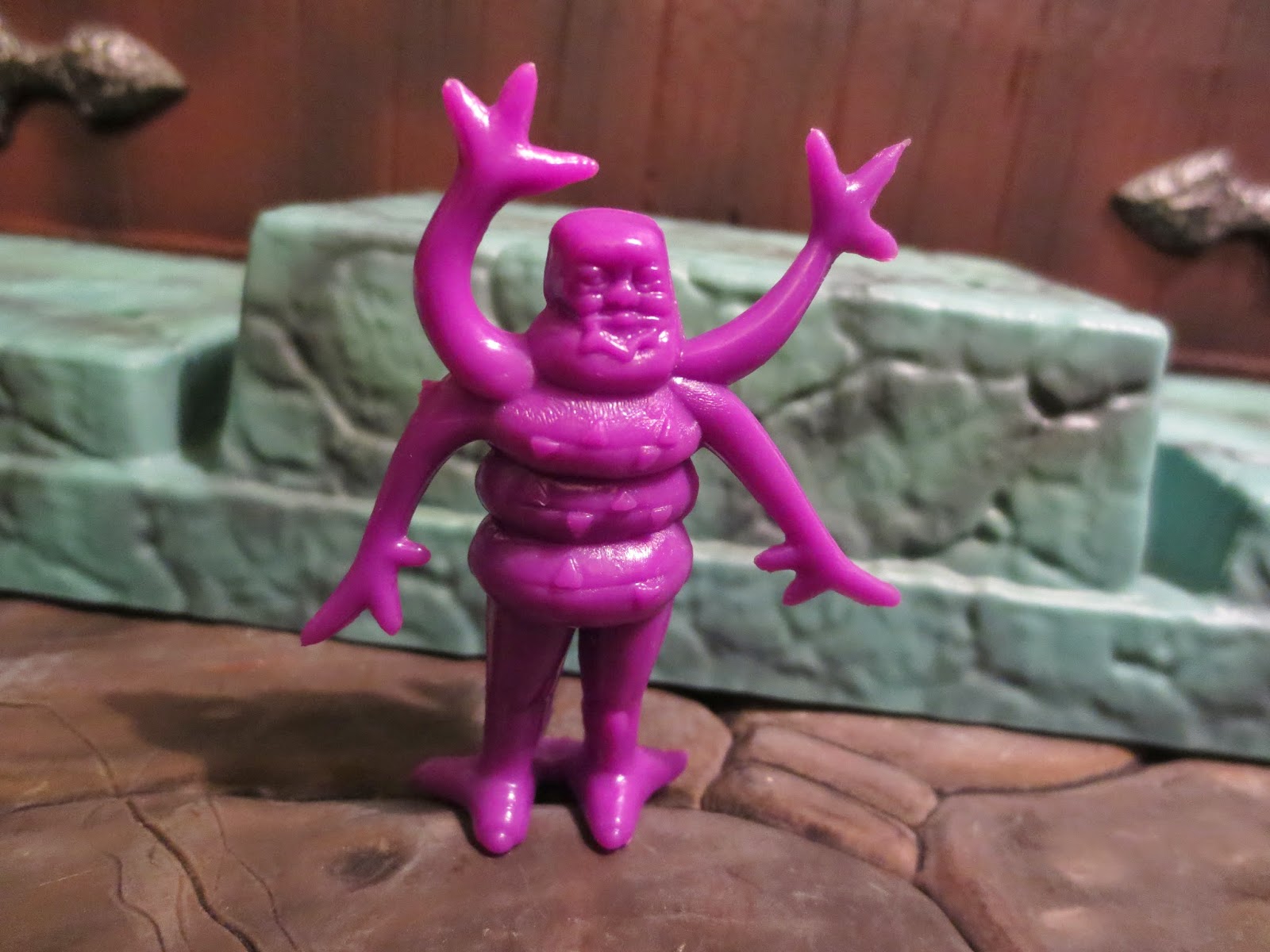 Squirlm: Squirlm is the monster the other monsters fear! A tentacled monstrosity with an awkward grin on his face, legends of Squirlm's terrifying powers have spread far and wide. He apparently possesses the ability to slither through small spaces, reach into the air to capture flying prey, and expand to massive sizes. My set came with one Squirlm molded in purple.

Just an observation: There is a monsters my set of figures had that John's didn't, and vice versa. John doesn't have Squirlm but my set doesn't have the large imp looking guy with furry shorts on. Anyways, just know there's more monsters out there! You know, in some perplexing way that's kind of a comforting thought. That being said, isn't this set crazy? The designs are just so weird that you can't help but love it! These creeps fit in really well with Monster in My Pocket and the trees and castle can be used in a number of places. I am disappointed, though, that a number of the figures can't stand on their own. Any minifigure should be able to stand on its own; that's just a fact. Anyways, looking at things overall, this set gets a Great from me. If you're into utter strangeness, toys that look like Creepypastas, or plastic minfigures, look these figures up and try to score a set. You'll probably be glad you did!