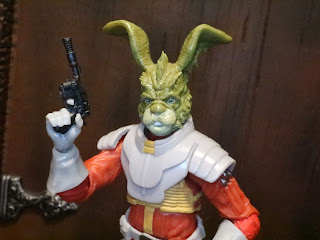 2021 is the 50th Anniversary of Lucasfilm Ltd. and Hasbro has been releasing quite a few Star Wars figures in conjunction with the milestone. Well, perhaps I should say re-releasing as most of the figures so far have been re-releases in new packaging. There's new stuff coming out, though, like the hard (impossible?) to find Target exclusive Clone Wars figures and the Fan Channel exclusives based on the Star Wars Legends books. Previously known as the Expanded Universe, the Legends stuff is composed of pretty much all of the Star Wars comics, novels, and video games released before April 25th, 2014. Disney has borrowed many characters, ideas, and concepts from the EU/ Legends material and Hasbro seems to enjoy mining it, too. Announcing Jaxxon T. Tumperakki in the Black Series was a pretty bold move. Firstly, this guy has long been one of the strangest Star Wars characters of them all and sort of a punchline of a character. Secondly, it's pretty crazy that this guy appeared in the Black Series before appearing in the 1/18th scaled Vintage Collection. The 6 inch Black Series is clearly Hasbro's favored scale now (it's mine, too) but it definitely seems kind of wrong to deny the 3 3/4th inch lifers a figure who has been around and who has been requested in toy form by fans since 1977 (he first appeared in issue #8 of the Marvel Star Wars series). He's here, though, and I'm pretty thrilled. I figured we'd never get him! Let's hop to it and check out Jaxxon after the break... 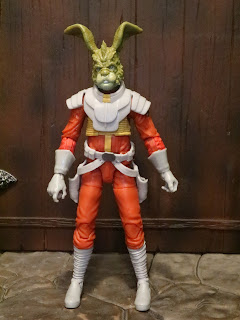 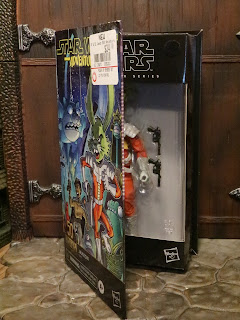 * The Lucasfilm 50th Anniversary figures have lots of unique packaging designs and the figures from the EU/ Legends canon are actually the coolest. Well, I should comment that Jaxxon has recently entered into the New Canon, though, and has appeared in a few places. This box is designed on his appearance in IDW's Star Wars Adventures comic series and shows a more cartoonish design for him. The box is similar to the box for the Skywalker Strikes Luke figure and reminds me of the packaging for the Galoob Micro Machines Expanded Universe sets from 1997/1998. 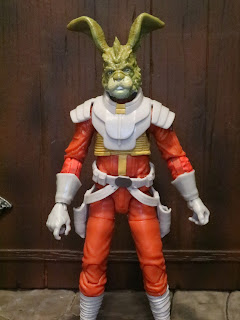 * Here's Jaxxon! Jaxxon is a green space bunny (a Lepi) in a red flight suit with a bit of gray armor. You may not notice it at first but he seems to use torso and arms of Luke Skywalker (X-Wing Pilot) and the legs and boots of farmboy Luke. Hasbro gave him what I believe is a new belt with dual holsters and some gray chest and shoulder armor and overall it all works really well. The figure nicely matches the general outfit Jaxxon wears in most of his appearances and he feels quite different and unique. They've muted his jumpsuit a bit, helping him to fit into the more realistic looking Black Series. 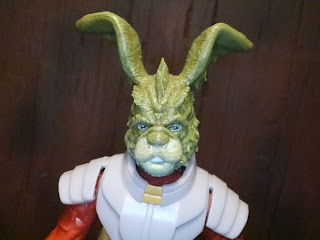 * If there's a part of Jaxxon that's going to be controversial (besides his general existence) it will be his headsculpt. Hasbro went with a look for the character that's less green Bugs Bunny/ Bucky O'Hare and more like an alien you'd expect to see in the background of the Cantina. I think they did a nice job here and his leporine features are still prominent but less exaggerated. The ears are awesome, though, and I like his facial expression. He looks like the scoundrel he's supposed to be. 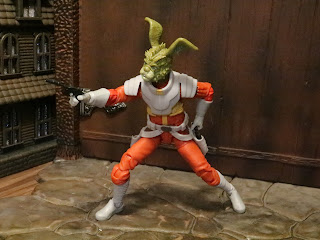 * Jaxxon is using older body parts but he still moves pretty well. The most important thing is that the plastic quality is nice and solid so the double hinged knees feel durable and not at all rubbery. His outfit doesn't really inhibit his motion at all. The shoulder pads themselves are nice and flexible so you can still move his arms and get a nice range of motion. Jaxxon's head has a really solid range of motion which helps add a lot of expression to his poses. 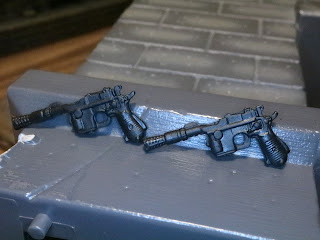 * Jaxxon comes with two blaster pistols. They look like standard DL-44s to me. Nice sculpts but no paint apps. 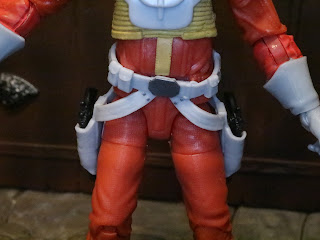 * Both blasters fit perfectly in the holsters on Jaxxon's left and right hips. If these holsters are reused from a previous figure I'm not recognizing it. 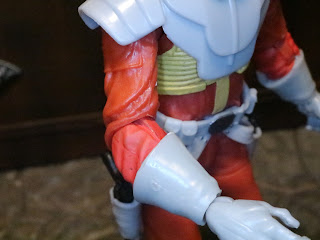 * Jaxxon's forearms are molded in the light gray plastic of his gloves with the forearms painted red. The match isn't perfect with the rest of his suit, however, and I actually had some paint stuck in the joint that I had to clear up before I could get his right elbow to move. 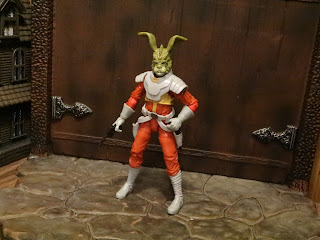 If Jaxxon isn't the most out of left field Star Wars: The Black Series release this year I'll be might surprised. He's a deep cut for sure and a really fun figure. Not necessarily technically impressive, especially being built with older parts, but a solid release of a character I never expected to see. He's a fan channel exclusive, however, meaning he sells for an extra $5 bucks. What exactly makes Jaxxon worth $5 extra bucks? Nothing, really. He's a Good figure still, and I imagine one that many collectors will leave on the shelf. Those who want Jaxxon will surely hunt him down, though. It's not every day we get a figure of a never before made Star Wars character who has been around for 44 years old. Jaxxon is proof that Hasbro still has some tricks up their sleeves for sure. Now that we have Jaxxon do we dare hope for the Tonnika Sisters? Imagine the uproar if Hasbro announced the Tonnika Sisters as the Black Series exclusives? There'd be 1/18th scale collectors traveling en masse to Pawtucket to protest. I really do hope the Vintage Collection fans get Jaxxon. It seems weird not also offering him in the scale that has always been associated with Star Wars.
This is the first Jaxxon T. Tumperakki toy I've reviewed on here. For more figures from Star Wars: The Black Series Phase IV check out the following:
332nd Ahsoka's Clone Trooper
Admiral Ackbar
Ahsoka Tano (The Clone Wars)
The Armorer
Boba Fett
Cad Bane
Clone Trooper (Holiday Edition)
Darth Vader
Din Djarin (The Mandalorian) & The Child
Garazeb "Zeb" Orrelios
Greef Karga
Han Solo (Endor)
Imperial Stormtrooper
Incinerator Trooper
Jar Jar Binks
Kuiil
Luke Skywalker (Endor)
The Mandalorian
Mandalorian Loyalist
Mandalorian Super Commando
Moff Gideon
Phase I Clone Trooper
Phase I Clone Trooper Lieutenant
Princess Leia Organa (Endor)
Range Trooper (Holiday Edition)
Remnant Stormtrooper
Rey (Dark Side Vision)
Sith Trooper (Holiday Edition)
Speeder Bike, Scout Trooper, & The Child
Teebo (Ewok)