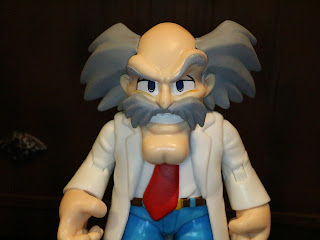 Guess what? This is my first actual review of an item from 2019! Shortly after the beginning of the New Year I was walking around a GameStop on my lunch break when I saw the complete series of Funko's new Mega Man action figure line. Since these are about the perfect size to mesh with Jakks' World of Nintendo line I had to at least pick up Mega Man himself and his nemesis, Dr. Wily. First appearing in 1987's Mega Man on the Nintendo Entertainment System, Dr. Wily has long been obsessed with turning Dr. Light's robots in terrifying instruments of chaos. He has a great classic cartoon mad scientist vibe to him, easily looking like a character from an early 90s cartoon. He was tough to pass up, you know? There are only five figures in the first series of Mega Man figures and four of them are Mega Man variants, so this guy stands out because he's a completely unique sculpt. Let's check him out after the break... 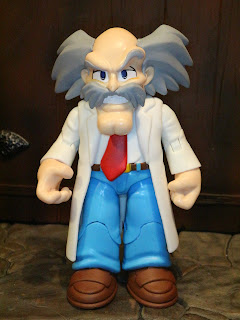 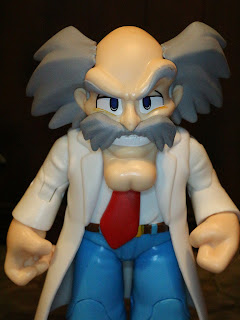 
* I love how animated and stylized Dr. Wily looks. He's just really colorful and fun, not unlike an early 1990s cartoon based toy. He definitely reminds me of the Playmates or various Disney based toys of that era. While he's dressed in pretty standard blue jeans, a lab coat, and a red tie, little touched like the softer plastic of his lab coat and the slightly crooked tie definitely help Dr. Wily to seem a bit more unique. Overall the paint work is quite clean and neat. 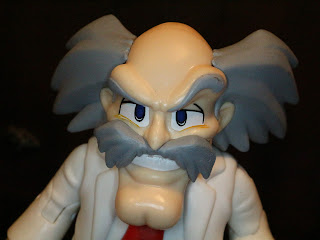 * The headsculpt is what really sells the figure, however. Check out that grin! That's pure deviousness right there, folks. His over the top hair, massive cleft chin, and scheming eyebrows add so much character. This guy is really a very fun figure despite not really having any features on paper that make him seem incredibly exciting. It's all about the personality, man! 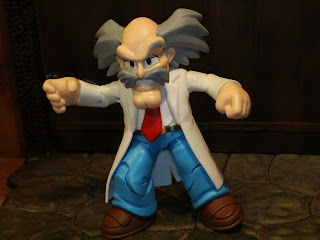 * Dr. Wily isn't Spider-Man but he still has more articulation than you might expect and it all feels fairly sturdy and well made. His legs are really just for getting him standing competently but his head and arms really do help give him some greatly expressive gestures. 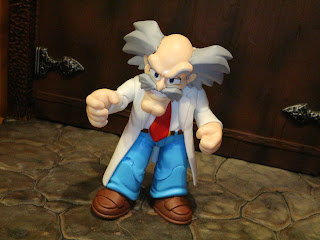 While an accessory or little robot of some sort would have made this a much cooler figure, Dr. Wily really isn't bad. For $10 dollars, he's probably a real treat to Mega Man fans. For me, as a World of Nintendo collector, he's a great way to get another classic video game villain on my shelf in a similar style and scale. Dr. Wily looks great standing beside the WoN Bowser, Ganondorf, the giant Metroid, and the S.H. Figuarts Team Rocket. He's a Good and a 1/2 figure of a character you probably don't already own in plastic form. I'm curious to see where Funko takes this line, as they have a bad habit of being one and done with the properties they acquire. We'll see what happens!