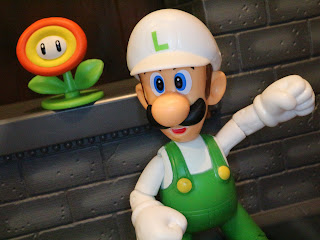 So kids, are you ready for a rant? 'Cause here comes a rant: Fire Luigi is absolutely just a repack. In a new series of figures in the newly named Super Mario line. Yup. I preordered the first series of Super Mario figures expecting that we'd be getting a slightly retooled Fire Luigi like we've seen various other retools in the line. Both World of Nintendo and Super Mario have a lot of reuse, so it's not uncommon. What really bites here, however, is that this is exactly the same figure as I purchased back in wave 1-4 from 2015. I can understand that there are some figures Jakks wants to get back on shelves, but couldn't they have changed the hands? Give Luigi a new expression? A new accessory, such as the fireball seen on the Fire Bro.? I'm all for reuse but a straight repack in a new series is just insanely lazy and disrespectful because, let's be honest, most of us have to order these sets online from e-tailers. There's no way to avoid these! This review is going to be short and most full of complaints, just like Wario's last relationship. More after the break... 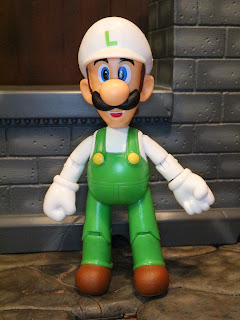 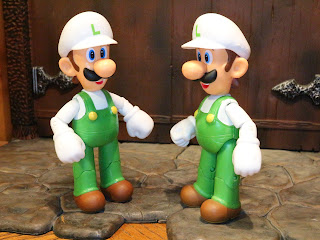 On the left is....the Super Mario Fire Luigi? yeah, that's him. On the right is the World of Nintendo Fire Luigi. They're the same darn figure. Ick. I mean, Fire Luigi was a Good figure, but why straight repack him with no changes. Was there no other figure Jakks could have included? heck, why not make Ice Luigi? 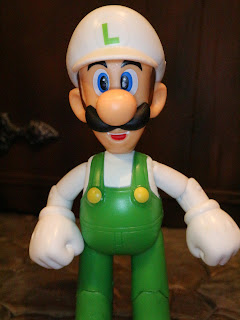 * I'll repeat what I said in the original review about the positives here: I like Jakks work on turning Nintendo characters into three dimensional figures. The articulation isn't crazy but it's solid and fun. These are good toys and still are a thrill for Nintendo fans. I wish these had existed when I was a kid. 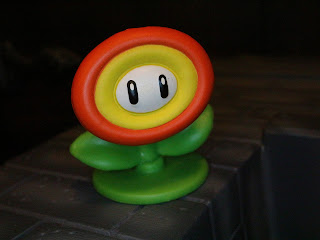 * Luigi appropriately comes with the same Fire Flower accessory that Fire Mario came with. This is a really cool looking accessory as it features the more modern look for the Fire Flower as seen in games like Mario Galaxy, New Super Mario Bros., and Super Mario Maker. The Fire Flower is permanently attached to a base which allows it to stand rather nicely alongside your collection of other Nintendo accessories. I gotta say, these little extras like Fire Flowers, 1-Up Mushrooms, and Yoshi eggs are really making the line for me 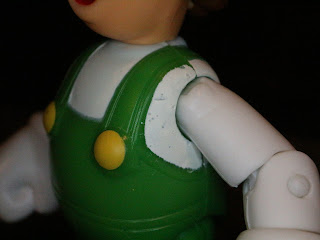 * Besides being a straight up repack (which I've complained about nearly enough) this Luigi has some paint problems. The white paint on the shirt looks really funky and imperfect. He also has the same problems with his hat looking scuffed up, too. 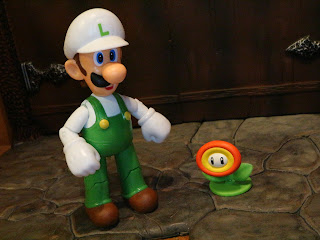 So.. this Luigi costs more than he did in 2015, doesn't have the cardboard block the original one had, and has worse paintwork. Considering this is a straight repack, I'm pulling out my executive privilege and declaring this a flop. A Crap flop. A worse figure repacked in a new series as part of an assortment. Oh, geeze. Considering we still don't have Mario A-listers like Rosalina, Daisy, or most of the Koopa Kids and other current characters and/ or popular characters like Nabbit, Thwomp, Dixie Kong, Birdo, and Toadette, this just feels like a figure that's presence isn't going to help this line at all.


If you like tall Italian men, I've reviewed a few other Luigi figures: Fire Luigi, Cat Luigi, and the standard Luigi.