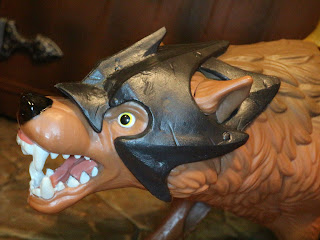 Today I'm plowing through the 2018 releases from DC Primal Age that I've picked up (all of my figures are the 2019 Target releases) and after reviewing the Batcave now I'm going to check out the two beasts from the first series. First up is Batman's trusty pet Ace the Bathound, now reimagined as Battle Cat like dire-wolf that Batman can ride into battle. Like the larger beats figures from various 1980s toylines, especially Masters of the Universe, Ace the Bathound comes in a large window box. Let's check Ace out after the break... 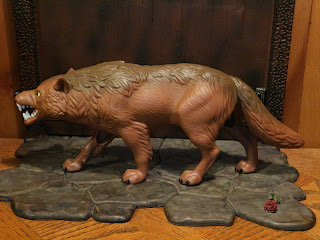 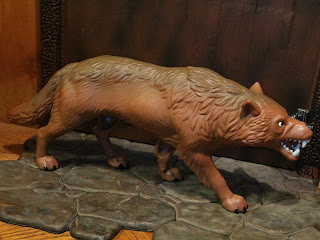 * Ace is completely unarticulated, just like the vintage Battle Cat and Panthor. He's a simple hollow plastic figure that manages to look pretty cool and features some decent paint applications on his fur. The fur itself is nicely sculpted too, which helps him to look even cooler. 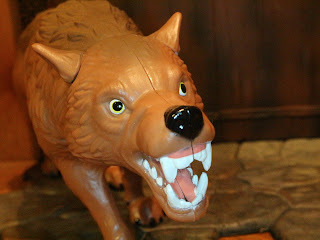 *Ace looks pretty fierce! I like the work on the face, especially the open mouth and sharp teeth. 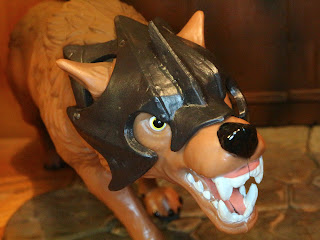 * Ace features a removable mask, just like his classic counterpart. Well, his mask looks more like one of the masks from an Orc or an Urak Hai from The Lord of the Rings, but it fits his war-like persona. Be careful removing it as the mask is a bit more rubbery while the ears are made from a harder, less flexible plastic. 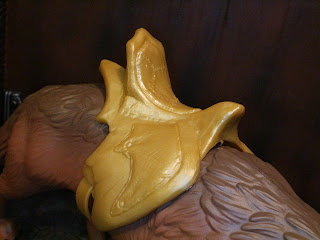 * To enable to mount his steed, Ace comes wearing a saddle. The saddle is removable and features some bat wing designs on the sides along with a stitched appearance on the seat of the saddle. 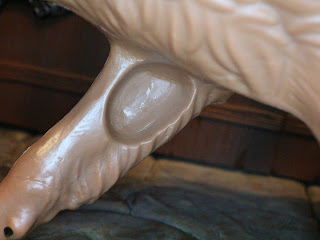 * Ace feels hollow which makes him feel kind of cheap. Furthermore, he has these weird hollow indents on his legs. Why? They just look odd and make the figure seem cheap, but not in a classic sort of way. 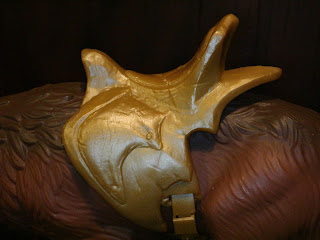 * The saddle itself feels like it is made of a very cheap, weak plastic, too. The materials just don't feel like they're made with much quality which is a bit disappointing. I really would hesitate to give this toy to a kid as I don't think it would hold up to much actual play. 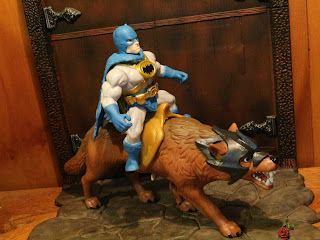 I love the concept of Ace the Bathound as Batman's steed in this line and I like the overall look of the figure, but the construction itself feels rather cheap. Thus far the Batcave felt pretty solid and well made but Ace feels like a knockoff item. There a difference between making a toy that evokes the style of an era and making a toy that feels like an actual product of the era, warts and all, and Funko maybe strayed too far into capturing the sometimes haphazard quality control of some 1980s 5.5 inch figures. He's an Eh and a 1/2 figure and is rather frustrating as he could have been so very, very cool.


This is the first figure of Ace the Bathound I've reviewed. For more DC Primal Age reviews, check out the following: