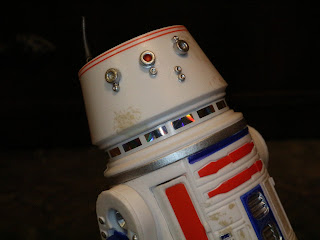 Legend says there is only one way for a character in the Original Trilogy to be truly immortalized: To have had an action figure released by Kenner in the vintage Star Wars action figure line. R5-D4 is one of those characters. While the little R5 unit does have an overall effect on the plot, it's doubtful anyone would ever know his name if it weren't for the fact that Kenner released him in the 1979 series of Star Wars action figures. R5-D4 (AKA Skippy the Jedi Droid. It's true. Look it up.) wasn't one of the original 12, but Hasbro still decided to give him a release in the 40th Anniversary Collection as an exclusive to both GameStop and ThinkGeek. He was pretty tough to track down initially, but now he's starting to become a bit more common so look around at your local stores before you pay a bit more for him online. While he's lacking the proton torpedo launcher and blaster cannons of the POTF2 release, he's as film accurate as he's ever been. Let's take a closer look at R5-D4, the slacker droid with no motivation, after the break... 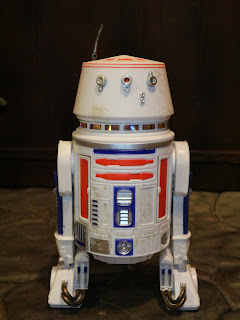 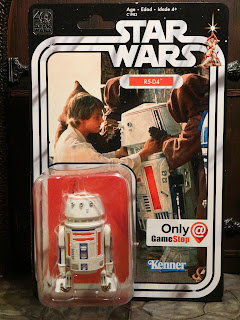 * First things first, you really can't talk about these figures without mentioning the packaging. While Hasbro isn't doing anything new by recreating the vintage Kenner packaging, it always manages to look incredible. It took me at least a month after the release of the 40th Anniversary Black Series figures before I ever saw one on store shelves and once I finally had one in hand I was amazed at how large these are. I mean, the Black Series figures are in a 6 inch scale, but the packaging on these is just huge! It's quite striking, though. There is a packaging difference on R5-D4: If you purchase him at ThinkGeek you won't get the "Only @ GameStop" sticker on the bottom right. Sadly, the packaging is not collector friendly. 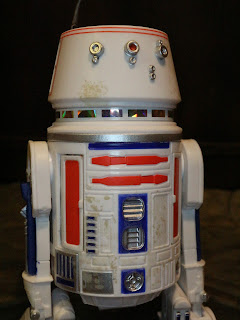 * Last year when Hasbro released the exclusive three pack of R2-A3, R5-K6, and R2-F2 I predicted that R5-D4 wasn't far off. I was right! R5-D4 is absolutely, 100% a repaint. The body was originally used on R2-D2 and has been used on every astromech droid since while the head is taken from R5-K6. Fortunately, those are all still nice, detailed sculpts and the strong paintwork beautifully captures the droid's likeness. 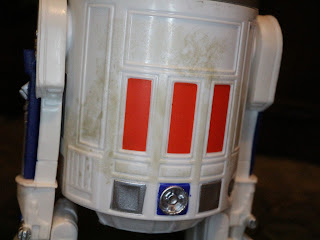 * I love the grimy, dusty paintjob on R5-D4. It really helps to give him that "living on Tatooine and traveling around with a bunch of Jawas" feel. 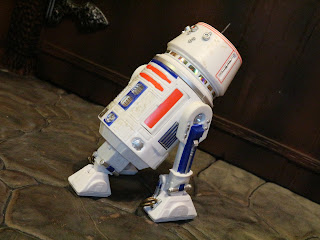 * Since he shares the same body as every other astromech droid in the line, R5-D4 also features a retractable third leg. Rotate his head and the leg descends (rotate his head the other way and it goes back up into his body). It works well and nicely gives us a few different display options. 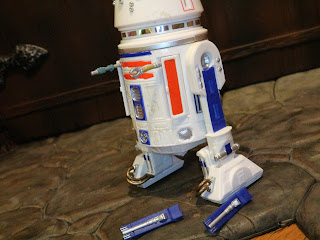 * Again, since he shares the same body as the original R2-D2, R5-D4 features the two hinged panels on the front of the body that open up. Inside is a hinged claw arm on the left and a data port/ universal computer interface arm on the right. He also has the removable side panels so you could add jets or other side panels from previous droids to customize your figure a bit. 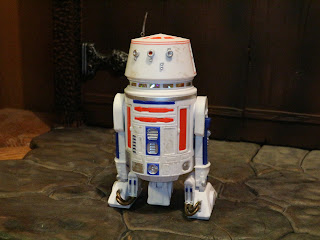 *  So, this is pretty much like beating a dead horse at this point but the astromech droids in this line are actually too small. The 40th Anniversary Collection would have been a great time to upscale both R2-D2 an R5-D4, but Hasbro is still using this smaller scale.

* Considering he's the same price as most other figures, I wish R5-D4 had come with something else. An alternate "bad motivator" attachment for his head would have been amazing! 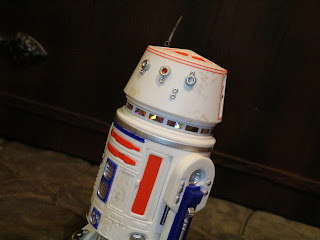 R5-D4 is a figure I assume most Star Wars: The Black Series collectors are going to want/need. He's a recognizable droid and has the vintage Kenner cred that makes him seem absolutely essential to a collection. Still, he's just a repaint and GameStop is selling him for a few bucks more than the average Black Series figure. He's a good figure, but the package just seems a but underwhelming for what you're getting. He's an Eh and a 1/2 figure to me. If you're a completest on the Black Series you'll need him. He's not one for casual buyers unless you have a nostalgia for the character, though.

I haven't reviewed any other R5-D4 action figures on the site but I have looked at one other 40th Anniversary Collection figure: The Legacy Pack which includes the all new Darth Vader figure.