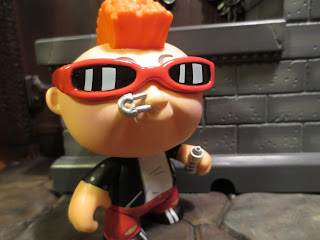 The mid 1980s to early 1990s featured a ton of gross-out entertainment/toy lines that kids loved and parents dreaded: Mad Balls, Boglins, slime of all sorts, the Mad Scientist Monster Lab, Dr. Dreaful, the Creepy Crawlers revival, Savage Mondo Blitzers, and perhaps most famous of all, the Garbage Pail Kids. A collaboration between the Topps Company and cartoonist Art Spiegelman (yes, the guy who wrote Maus), Garbage Pail Kids first made their appearance in 1985 as a series of trading cards and stickers and quickly became popular among the kiddies. Multiple series were released, a move was made (and quickly forgotten), the cards were banned from some schools, and Coleco sued Topps due to the way the Garbage Pail Kids resembled the Cabbage Patch kids. While the series died out in the late 80s, Topps began revisiting the line in 2003 to play on the nostalgia of the now mostly grown-up fans. To further celebrate the GPK legacy Funko has released a series of their Really Big Mystery Minis dedicated to the Garbage Pail Kids. The first series of figures has 12 unique characters and they're each packed one to a case! The great thing about that is that if you buy a full case (which is easy to do) you have the whole set. None of this having to buy multiple cases/ chase figure nonsense of other Mystery Mini lines. Today as I start looking at my set of figures, I'm showing off New Wave Dave. Ready for a look at this early punk rocker? Then join me after the break... 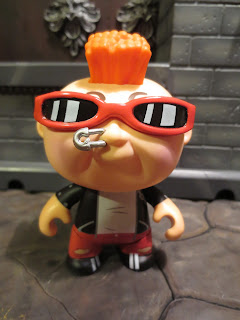 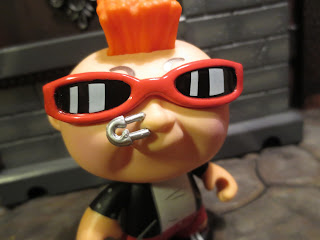 *I love New Wave Dave's headsculpt. The sunglasses are actually a separate piece and the paint apps on the lenses really give them some depth. I love their appearance. I also love the safety pin through his nostril. This guy is all punked out and really looks fantastic. Is is just me or does the face look like a young Corey Feldman? 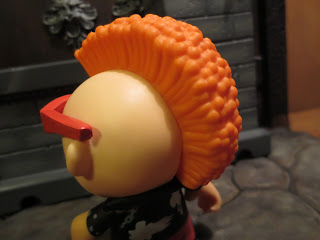 * New Wave Dave is rocking a pretty sweet mohawk. It gives him some added height and stands out thanks to it's bright orange color. Respect the hawk! 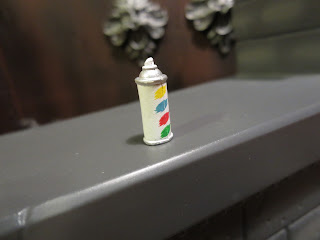 * Any accessory included with these figures is welcome and this can of spray paint is a great addition to the figure. It easily fits in New Wave Dave's hand and nicely resembles a stereotypical can of spray paint that's useful for tagging and whatnot. 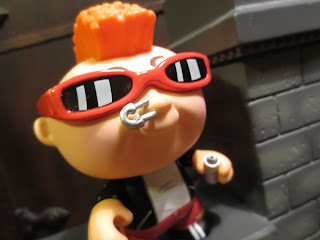 I think these little figures are fun and they're an imaginative tribute to the original cards. New Wave Dave isn't one of my favorite figures from this set but the way his head sculpt is pilled off really appeals to me. The extra pieces like the sunglasses and safety pin are really rad. I also have to say that I love that Funko did away with the rarity system their Myster Minis usually have. Getting one of each figure per case is really nice and should help to sell more of these. This is a Good and a 1/2 figure and should give you a warm feeling of nostalgia when you check it out!
Posted by Barbecue17 at 9/01/2015