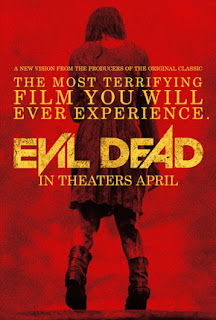 I originally wrote this review for ThEpic Review on 4/8/2013.

All right you primitive screw-heads, listen up!  I've been a hardcore Evil Dead fan since discovering Army of Darkness in a box of yard sale VHS tapes at my grandma's house in 8th grade, so I might represent the toughest audience director Fede Alvarez and producers Sam Raimi, Bruce Campbell, and Robert G. Tapert had to impress with this new film.  While the original The Evil Dead was a very grueling and gruesome horror film, it also somehow managed to implement some bizarre comedic elements to the film that give it a very different quality from your average horror film.  I'm happy to say that while the new Evil Dead manages to be an extremely gruesome horror film, it also still manages some of these unique touches that make it stand out from your average slasher film and give it that unique Evil Dead feeling.  By the way, note that the new film is called "Evil Dead" (no "the") and the original is "The Evil Dead."  Read on if you want some more!  Do ya???


Evil Dead follows a similar formula as the original film: Five young friends meet at a dilapidated old cabin in the middle of the woods, find an evil, magical tome, unleash some demons, and horror ensues.  The premise is different in Evil Dead, however, as the five friends aren't heading out for a weekend of fun.  Instead, Mia (Jane Levy) has been brought out into the woods by her friends Eric (Lou Taylor Pucci) and Olivia (Jessica Lucas) to help her overcome her cocaine addiction.  Joining them there is Mia's brother David (Shiloh Fernandez) and his girlfriend Natalie (Elizabeth Blackmore).  While Mia is thrilled that her brother has come to support her, there's still some tension in their relationship as David left Mia alone to care for their mentally ill and sick mother who has recently died.  The cabin has belonged to their family for quite a few years, as the siblings remember spending time there when they were kids, and Mia has chosen it to be the site where she fights her personal demons.

Hypersensitive to everything due to coming off of heavy drug usage, Mia keeps commenting about the horrible smell lingering in the cabin which no one else can really notice.  The family dog, Grandpa, is along for the trip too, and he eventually begins scratching at a rug, leading to the discovery of a cellar under the floor. In an underground room the group finds dead cats hanging from the ceiling and a book wrapped in heavy wire.  Eric's curiosity leads him to open the book and attempt to decipher it, despite the many scrawled warnings upon pages urging him to do the opposite.  Soon, Mia begins seeing a strange girl and the mixture of the visions and her own withdrawals leads her to flee the cabin in a vehicle.  Wrecking her car, she comes face to face with an evil being in the woods and soon becomes possessed herself.  It's not long before her friends start noticing that something is wrong with Mia, and it's not just withdrawal. That's when the bloody fun begins, the gore ramps up to eleven, and things get groovy.

What makes an Evil Dead film an Evil Dead film?  My first reaction when I heard about the remake, and I'm sure it was the reaction of many others, was of course, Ash.  Bruce Campbell's portrayal of Ash Williams is without a doubt the most iconic character in all of cult cinema, so how the heck do you begin to make an Evil Dead film without Ash?  Of course, put some thought into it and you'll realize that in The Evil Dead, Ash's character is quite different from the loud mouthed braggart of Evil Dead 2 and Army of Darkness.  He's a pretty average guy, (albeit with a killer chin).  After some thought, my ideas about what makes an Evil Dead film are 1.) Excessive violence, 2.) A character who fights back, and 3.) A bizarre mixture of humor, even amidst the horror.  I'm willing to be wrong on these, but that's what I'm going with as my Evil Dead criteria.  Let's hit them one at a time and see if Evil Dead covers the bases. Shall we?

Does this movie have excessive violence? The answer is yes.  I 'm trying not to spoil much about this movie for those who still haven't made up their minds whether or not they want to see it, but here are just a few of the gruesome scenes: multiple people get shot with a nailgun, a crowbar is used as a weapon, someone gets stabbed with a hypodermic needle in the eye, a double barreled shotgun is used liberally, a chainsaw comes into play, and someone cuts off their arm with an electric carving knife.  Yes, the movie is violent.  All but the most jaded moviegoers will be cringing in their seats.  It's shocking and impressive when you consider that other than doing some film touch up, the film was shot all with traditional effects.  The movie does some great things and also manages to be super creepy at times.

Does at least one character fight back against the deadites?  Yes again! We at least see four of the five characters fight back against the deadites in some way.  While movies like Hostel and Saw really don't entertain me, and honestly they disturb me a bit, I absolutely love movies where humans have to fight back against some evil creature, monster, or entity. Whether it's The Evil Dead, Predator, They Live, The Descent, or practically any zombie movie, there's something exciting about watching characters fight back and refuse to be victimized.  I think Evil Dead manages to capture that feeling of humanity fighting to survive.  While we don't have a wisecracking, deadite hunting Ash in this film, we're watching each character fight for survival, hoping that each of them might become the next "Ash."  The deadites are wonderfully evil.  While some of them come off as more mindless walking slayers, others are very vocal and have the mocking personalities we've come to love from these creatures.  They're exactly the type of enemies you'll love to hate.

Besides just being violent and scary, is the movie fun? I think so. I joked with my wife that I could tell who the hardcore Evil Dead fans in the theater were because they were the ones laughing along with me when a deadite vomited a bloody mixture all over another character.  While Evil Dead models itself most closely after The Evil Dead, and not the more comedic Evil Dead 2 and Army of Darkness, it still manages to inject humor into it's most intense scenes.  There's a brilliant scene where a character is escaping through the walls of the work shed and a deadite is shoving a machete through the wall trying to stab her.  While the scene manages to be frightening and tense, the way it is shot almost lends itself to a "Looney Tunes" like feel as the character manages to dodge the blade.  I think Sam Raimi has always realized that there is a very fine line between horror and comedy (both genres that most elicit a physical reaction out of the audience) and it seems like Alvare was paying attention to that.  The movie's a blast from beginning to end.

Do I have some criticisms of the film? Yes, but they're pretty sparse. First, there is a brief opening scene to the film that takes place at an undisclosed time.  The opening scene isn't bad in and of itself, but it happens to show a deadite.  Within the first five minutes of the film.  While the original The Evil Dead leads the audience on for quite some time before anything happens and we see our first deadite, Evil Dead seems to reveal one of it's greatest tricks far too early. Secondly, while I appreciate that the five characters in this movie aren't your typical horror movie twenty somethings, some of them are a little dull.  While Mia and Eric have some unique character quirks that help the audience to sympathize with them (although Eric definitely has selective reading comprehension failure), Olivia, David, and Natalie aren't bad, they just don't really stand out much.  Maybe a scene or two more of the characters just spending time together on their first night at the cabin would have helped?

I've stated most of what I love about this movie already, but I wanted to mention how much I loved the many throwbacks to the original films.  Here are the ones I picked up on:  *NOTE: YOU MAY CONSIDER THESE SPOILERS*  At the rundown cabin, we can see the rusty and crumpled remains of Ash's car in the woods near the cabin, the friends discuss being from Michigan and one of them is seen wearing a Michigan State University sweater, the magnifying glass necklace that David gives to his sister Mia is similar to the necklace Ash gave to his girlfriend Linda in The Evil Dead,  Mia uses the line, "Swallow this," adding on her own ending, some of the images in the Naturom Demonto look like various iconic Evil Dead images used on posters and marketing materials, Professor Knowby's voice can be heard over the end credits, oh, and Ash appears after the end credits!  Groovy, indeed!  Since it now seems that the plan is for the new and old Evil Dead films to eventually collide in a future film, perhaps these Easter Eggs are now even more significant.


Overall, I loved this movie. It was gory, exciting, and tons of fun.  While I'm still anxiously awaiting the "Army of Darkness 2" that Sam Raimi has recently announced, this was an excellent addition to the overall Evil Dead franchise.  It managed to build up a very creepy and foreboding atmosphere, bring some truly creepy deadites to the screen, and paid off with one of the most intense film climaxes I've seen in some time.  If you're not a horror fan or don't have a strong stomach, avoid this movie like the plague. Otherwise, head on over to the nearest theater and check out Evil Dead. You got that?