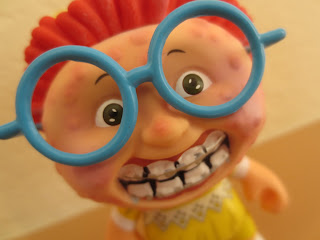 I'm going to cut the introduction short since I'm looking at (yet) another figure from the first series of Garbage Pail Kids Really Big Mystery Minis by Funko. Today I'm looking at Ghastly Ashley, your stereotypical teenager with braces, glasses, and really bad skin. Since I was a stereotypical teenager with braces, glasses, and bad skin, I can sympathize with Ashley here. She's just trying to look pleasant for the boys. Let's pay Ashley a bit more attention after the break... 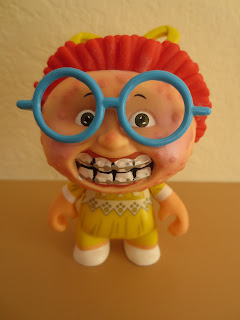 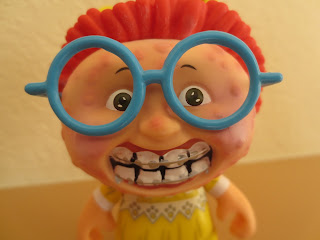 * The glasses are oversized, even for a nerdy kid. Still, the actually look pretty funny and thus I think they work just fine here. They're a separate piece attached to Ashley's headsculpt and they really do stand out. 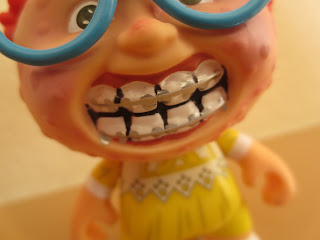 * The braces and acne on Ashley's face are pretty nasty, thus I think Funko handled it well. The acne really looks...very realistic? It's various shades of red and actually looks puffy, irritated, and swollen. Yikes! The original card showed more blackheads on Ashley's face but I think the work done here is just fine. 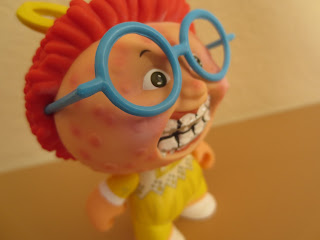 Poor Ashley! Maybe you can do her a solid by putting her on your shelf next to the Nerd kid from Robot Chicken. Think those two might hit it off? Funko did a nice job on crafting Ashley here and if you're completing this set or a fan of the character, you'll appreciate their work. She's not the most exciting figure in the set but she's still well done. I'd give her a Good and a 1/2. Don't feel too bad for Ghastly Ashley, though: At some point there were some Garbage Pail Kids cards released called "Where are they Now?" that showed the GPK in the future. Ashley, it turns out, grows out of her teenage problems and becomes a hit with the boys. You go girl!
Posted by Barbecue17 at 9/07/2015