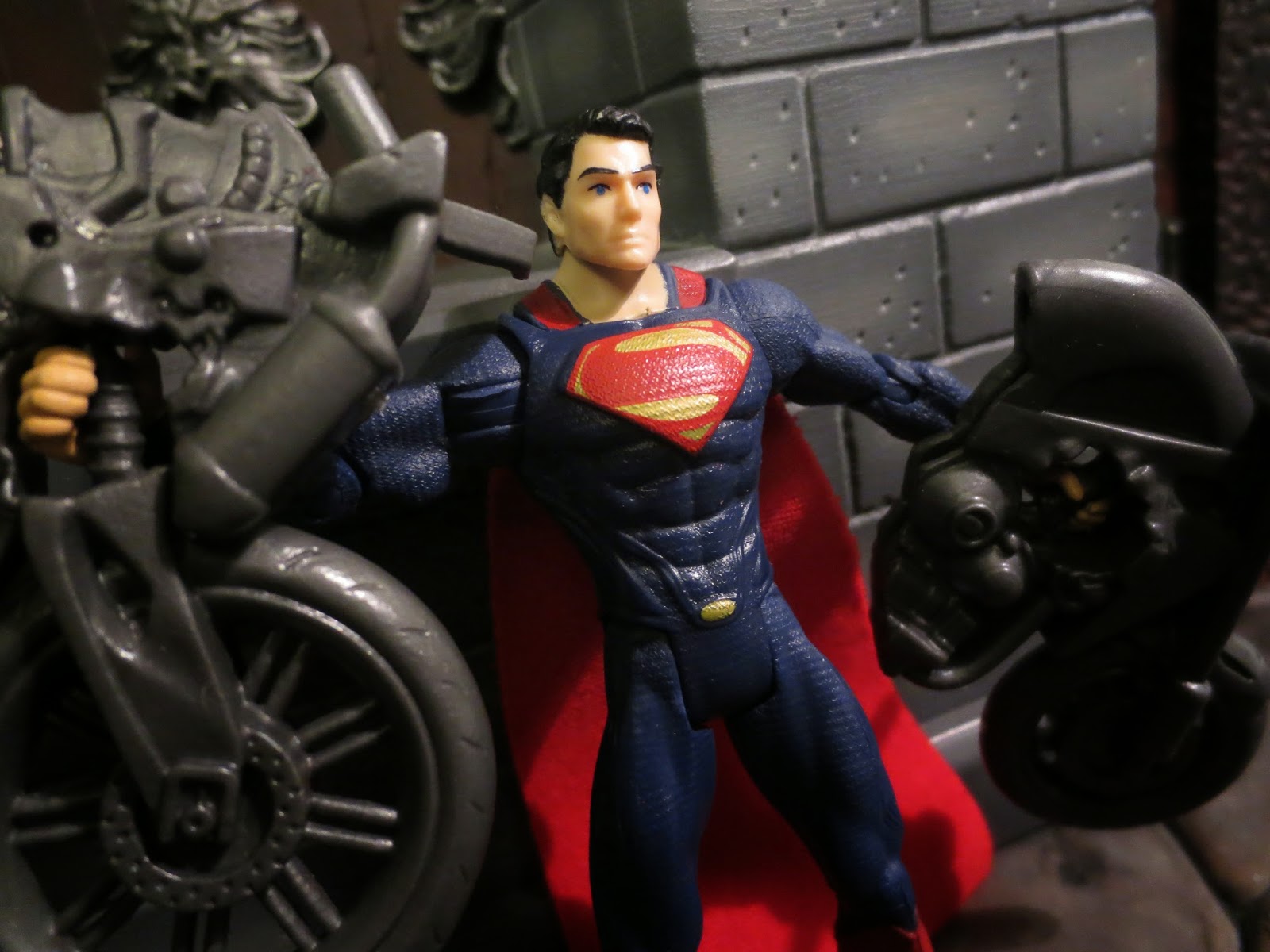 Before I get into the review, I want to think Action Figure Man over at Action Figure Imagery for sending me these figures. I won their February 2015 contest and received this figure and one of the smaller Guardians of the Galaxy two packs. I appreciate Action Figure Man's generosity in running these contests pretty frequently and giving out prizes! Thank you so much!

Man of Steel. I liked it. I liked it quite a bit actually, as it turned out to be one of my favorite films of 2013. I've always found Superman to be a Mickey Mouse: A recognizable and popular character whom people love that has done little to nothing noteworthy. Sure, I love the first two Christopher Reeve films and I enjoyed Lois and Clark when it first came on (I was pretty young), but there has been little else Superman related (other than his appearance in Batman-centric stories) that has interested me). Man of Steel changed that for me, although I think the things I enjoyed about the movie probably alienated Superman fans. I will say something we probably all agree on, though: Mattel's Man of Steel was pretty lackluster. Let's be honest: Superhero movie toylines have just gone down hill. While we're living in a time when superhero movies are box office gold and quite decent overall, Hasbro and Mattel keep giving us pure and utter trash. Seriously, many of the figures from the recent Marvel and DC movies truly look like they could be discount retailer material. For Man of Steel, Mattel did offer their "collector" focused Movie Masters line, but even those ended up fairly week. Today I'm looking at what was probably the best figure to come out of the Man of Steel smaller scale toyline: Split Cycle Superman. Ready for a look at this figure? Then join me after the break... 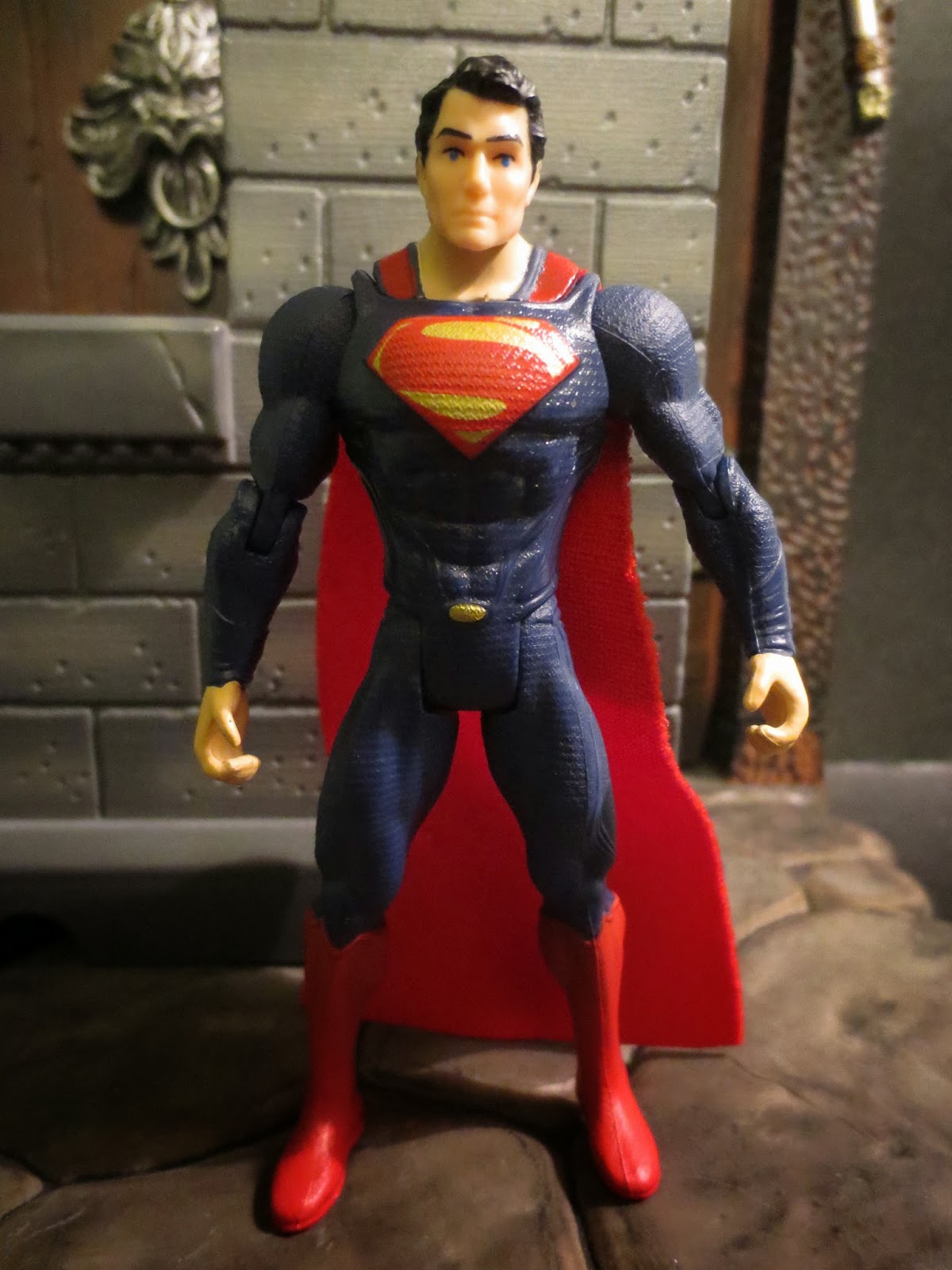 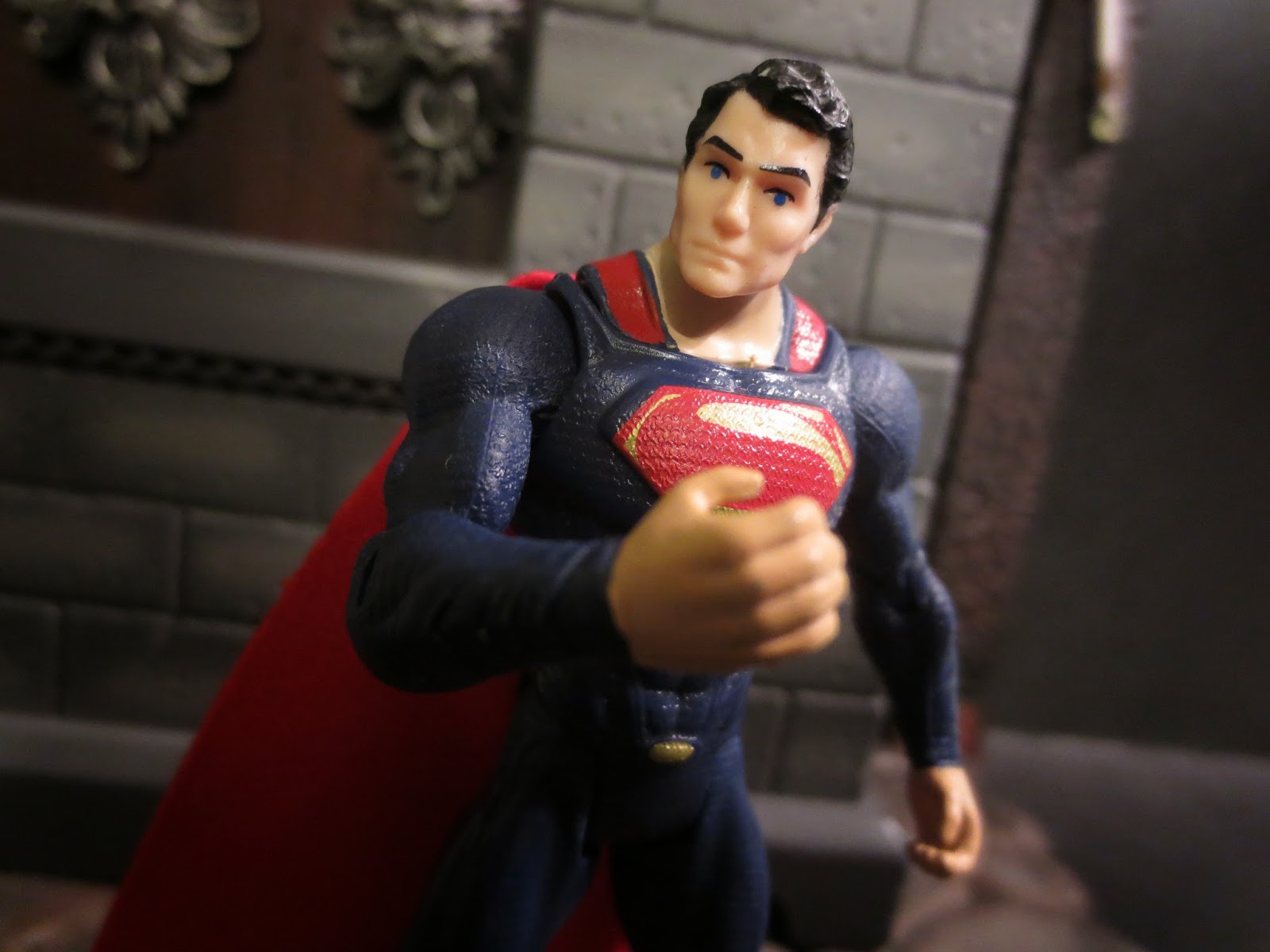 *One of the best things about this figure is that it is a standard, movie accurate Superman. While most of the movie based toylines have to offer multiple variants of the main character with every color of costume and every light up or missile firing gimmick they can think of, their typically needs to be a standard version of the character free of gimmicks or oddly colored garments. This is it. If you need a 1/18th scale Henry Cavill Superman, this is probably your best option right now. 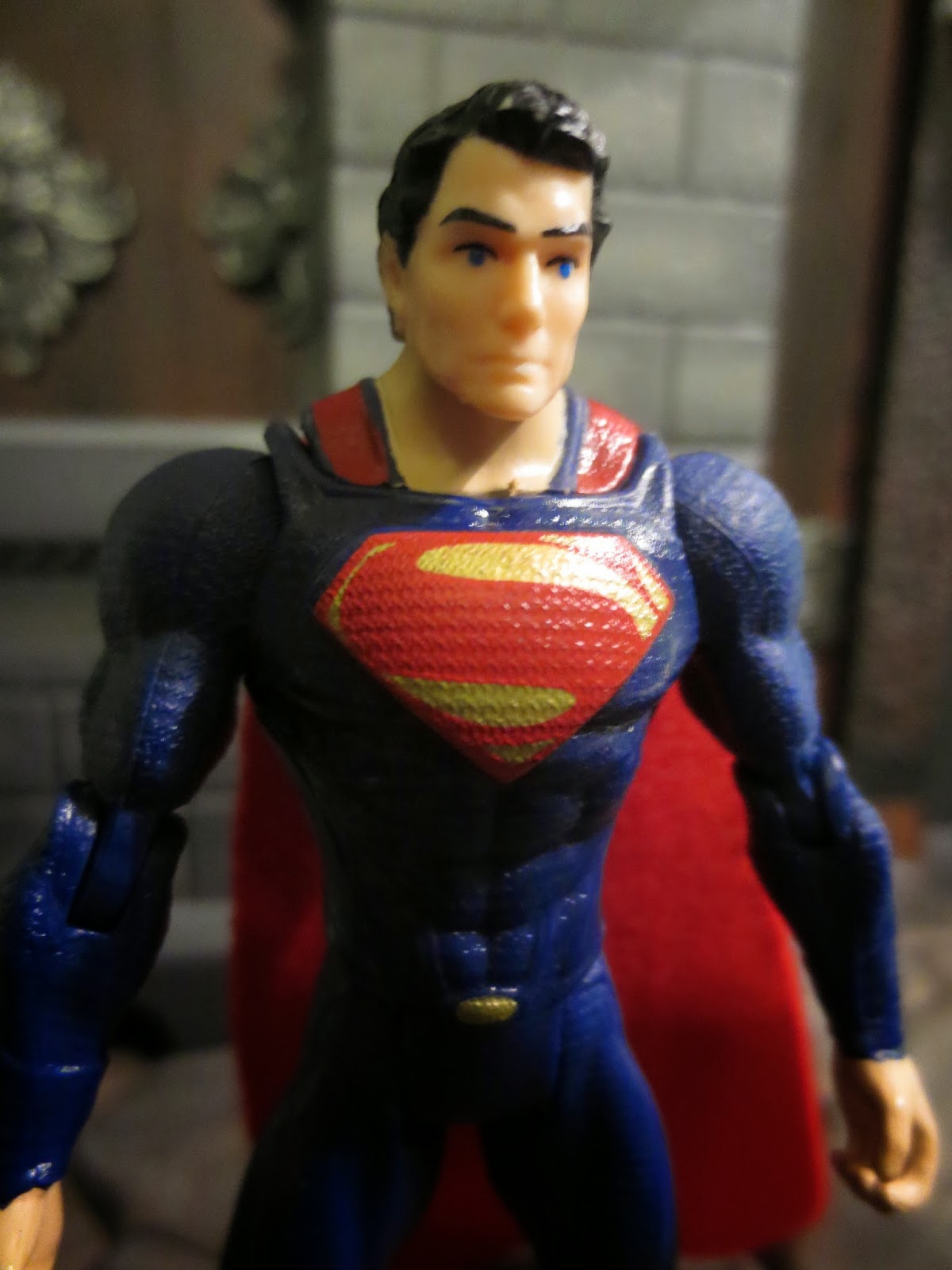 *The sculpting of the costume is fairly intricate and covered with the unique texture as seen in the film. I like how the "S" logo stands out from the chest. It's a bit more pronounced than the film version, but it works for the toy and adds some depth to the costume. 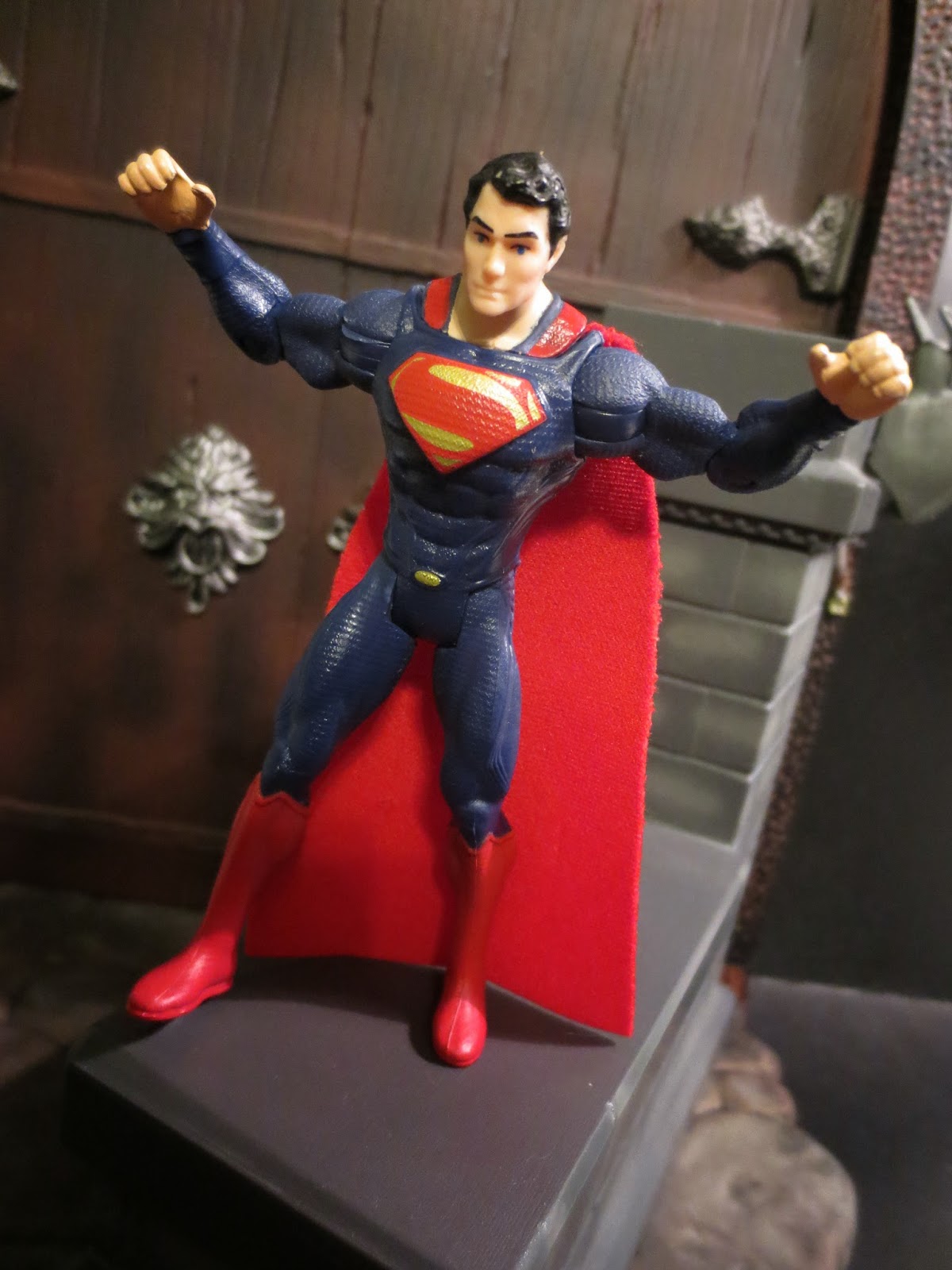 *For a figure that I assumed would only have swivel shoulders, I was pleasantly surprised that Superman has swivel/hinge shoulders and hinged elbows. This not only makes him more fun to play with but also gives him the ability to properly hold his accessories and take some fun, simple poses. 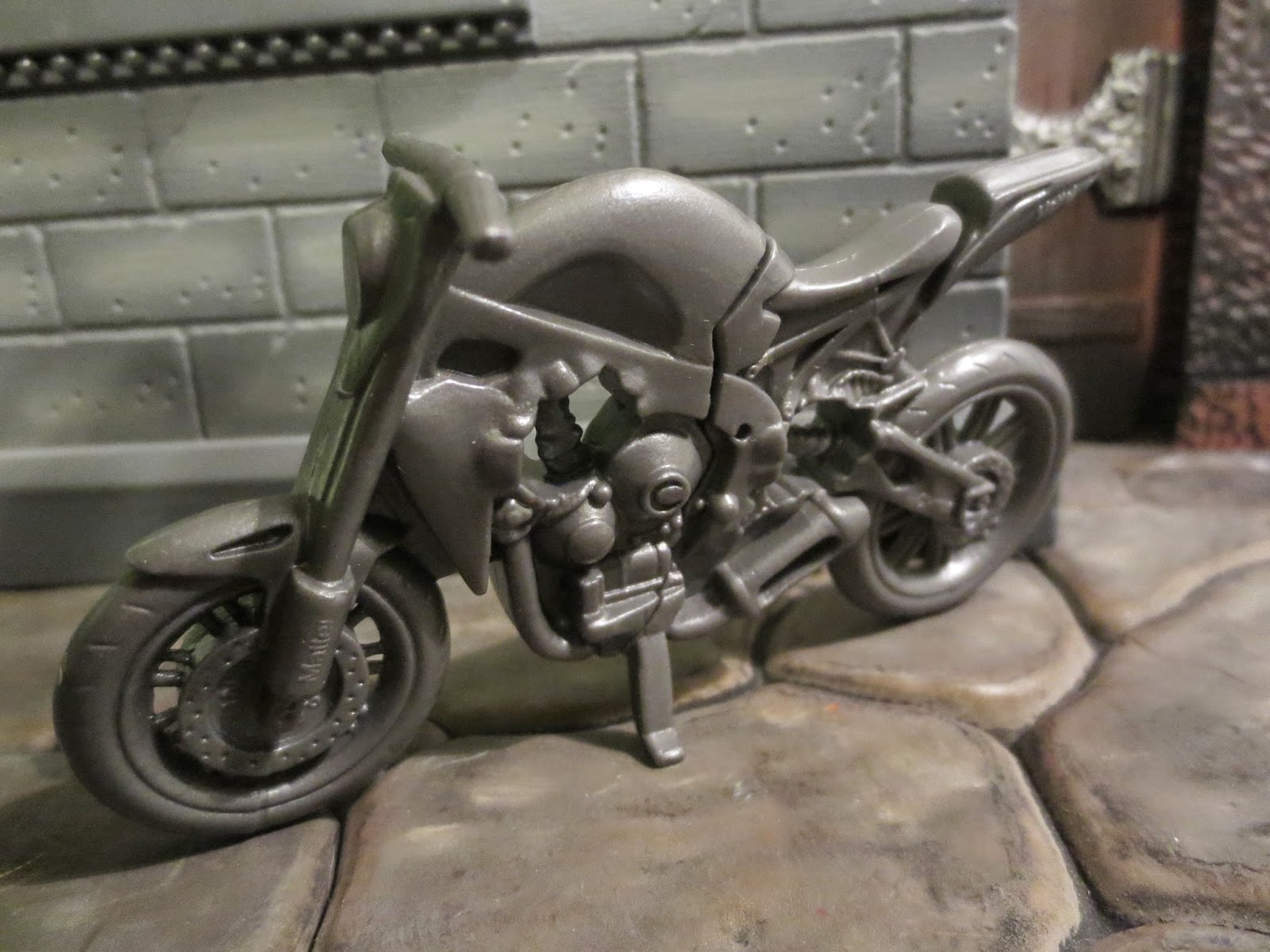 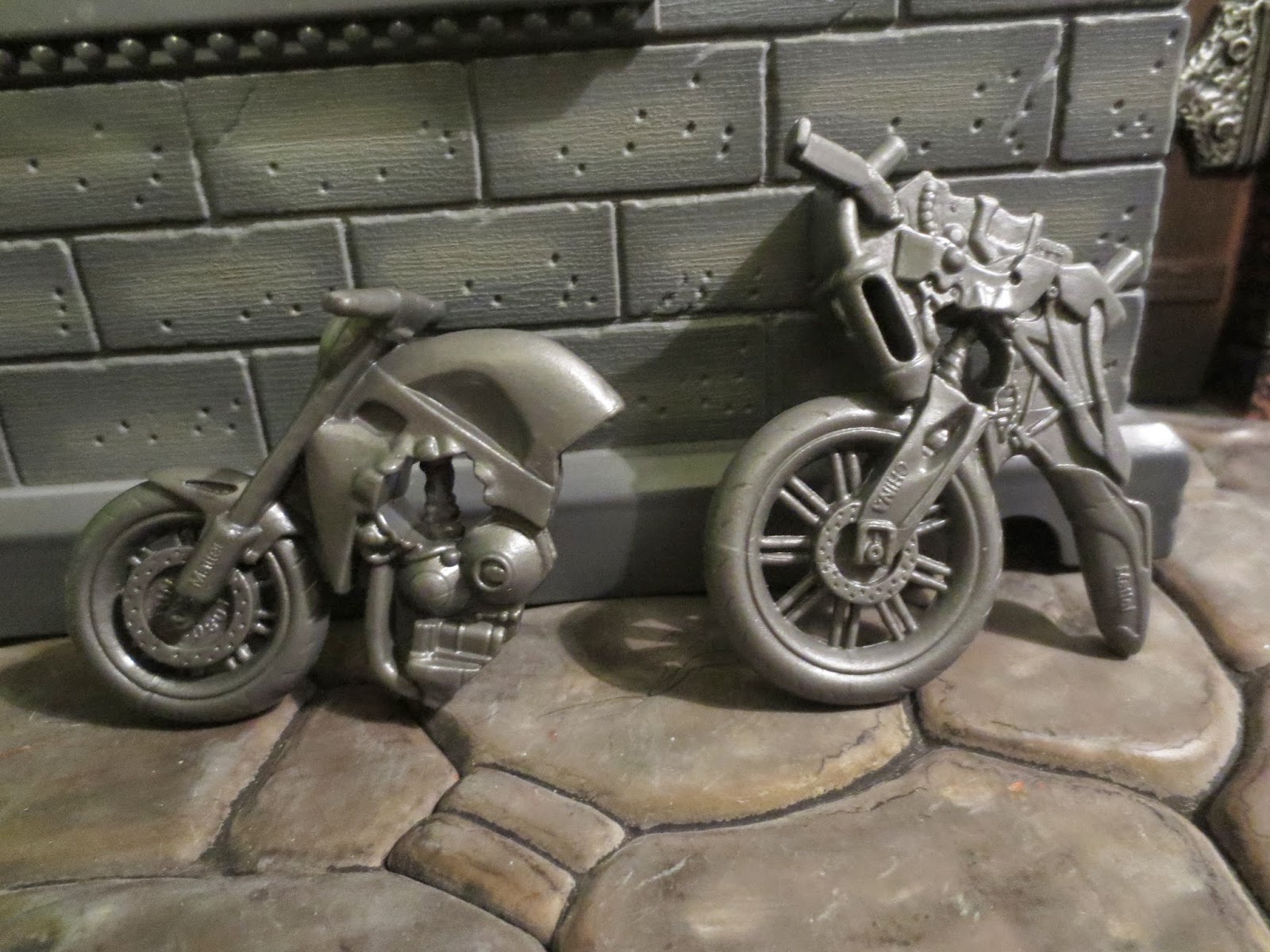 *I really like the "Split Cycle" accessory. It's a simple plastic motorcycle or dirt bike that splits in two. Thanks to some well placed bars on the fairly nicely sculpted bike, Superman can hold the two pieces in his hands and use them as weapons or toss them at Zod. I like this accessory far more than some kind of goofy light-up armor or bland, oversized missile launcher. It's tough to think of good accessories for Supes, but this was a decent pick. 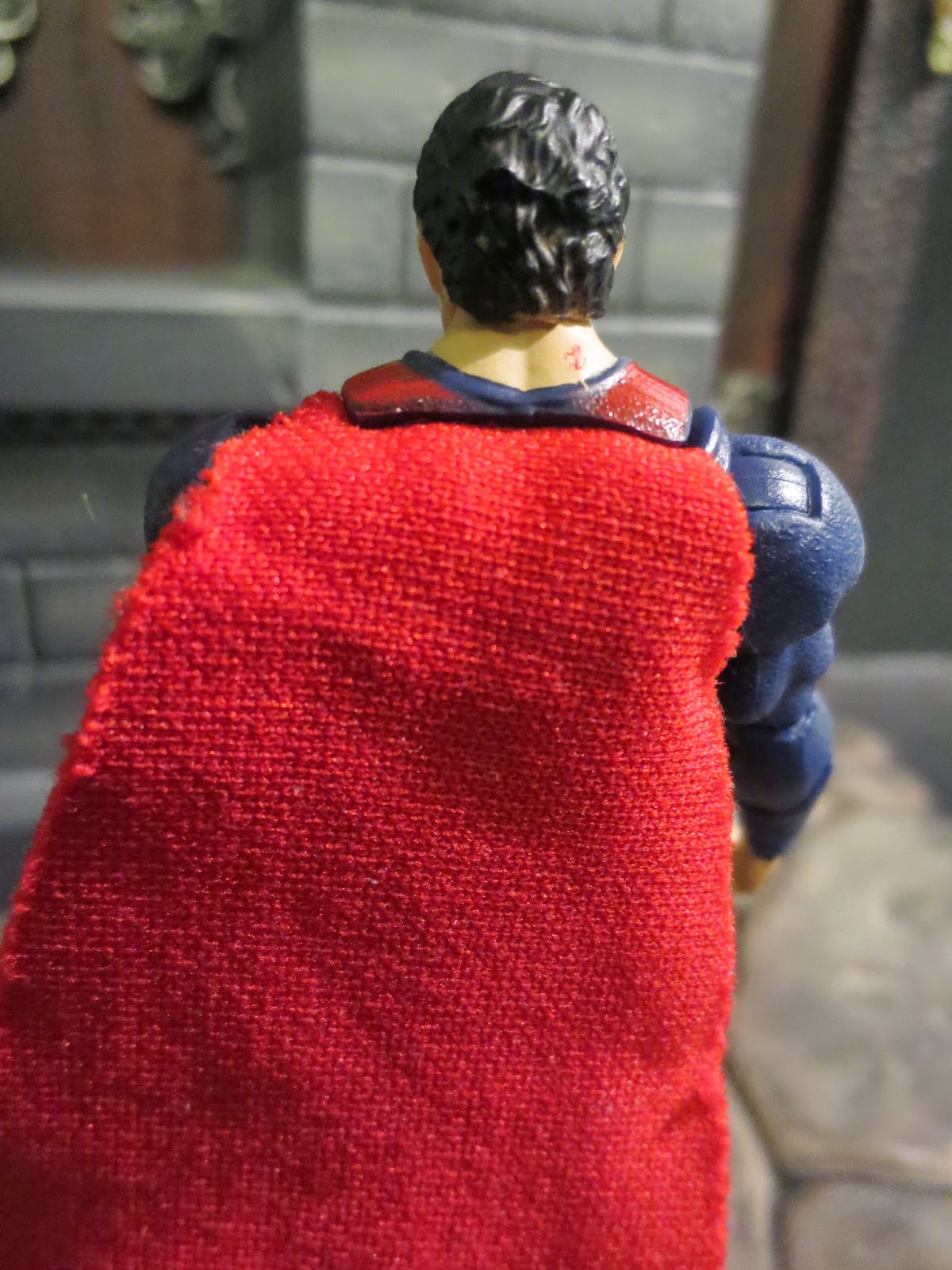 *The head just looks far too small. Superman kind of has a pin-headed thing going on here and it isn't doing the figure any favors.

*I'm not liking the cloth cape. Typically I'm a fan of soft goods capes, preferring them over hard plastic capes, but I don't think the cape was executed well here. It looks like a dull piece of fabric, is a bit uneven on the edges, and has a hole in it where it was attached to the package with a plastic tie.

*While most of the paintwork is fine, the paint on the neck is kind of sloppy. There is lots of blue paint bleed on the side of Superman's neck and some red splotches on the back. 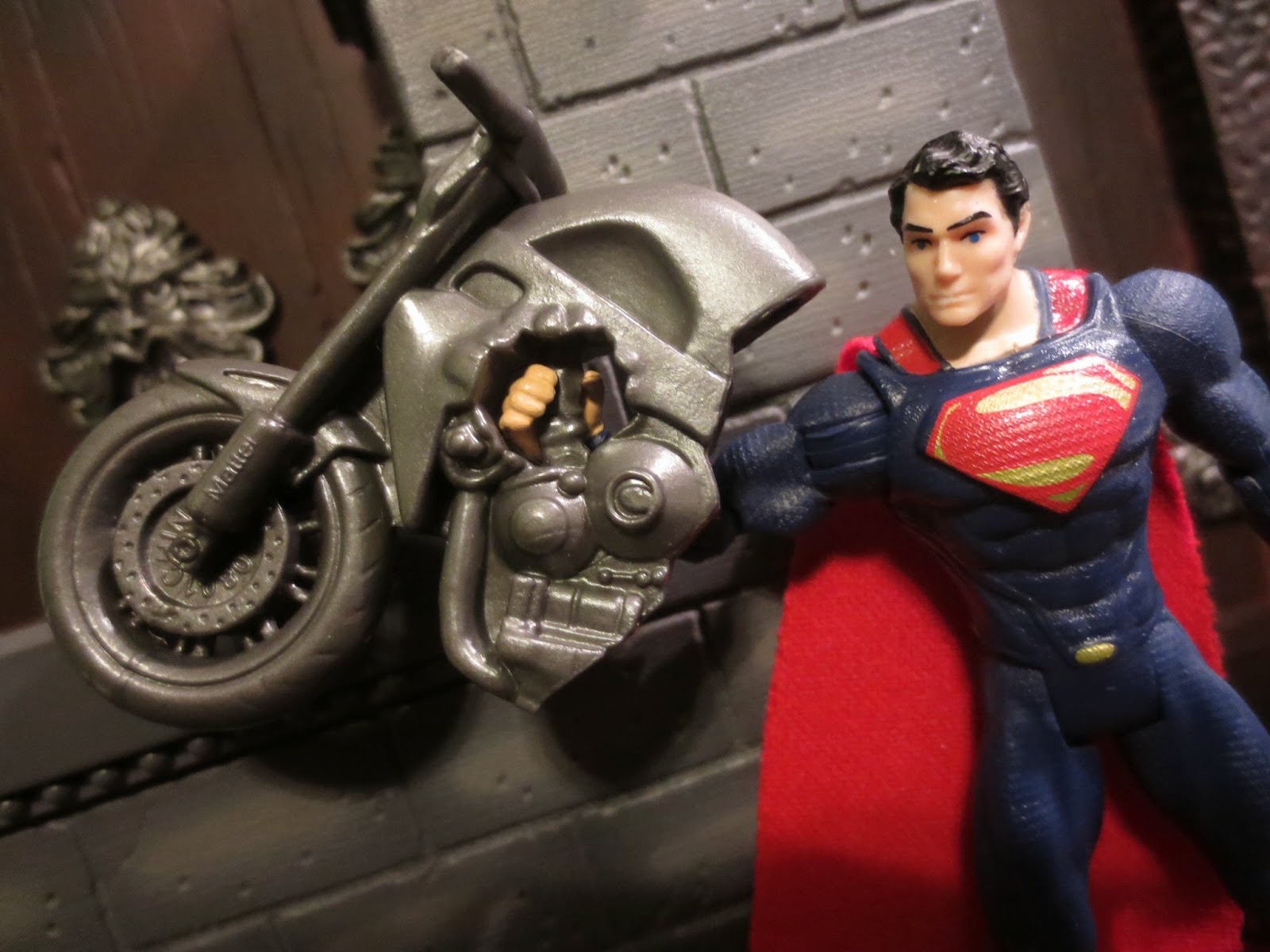 This is the only figure from Mattel's Man of Steel line that I own. If you're looking for these figures, they're still languishing on toy aisles and in discount bins all over. Lately superhero movie lines have just been absurdly uninspired and seem to just not be even exciting the kiddies who are the intended audience. That being said, this is not a bad figure. While it's not as articulated as other similar figures like Hasbro's Marvel Universe or Mattel's DC Multiverse, it is a great deal better than many other superhero lines. It's a basic Superman with some decent arm articulation and a decent gimmick accessory. Overall, I'm giving him a Good. If you're a big Superman fan or need a 4 inch Man of Steel Superman for your collection, you could do a lot worse than this figure.