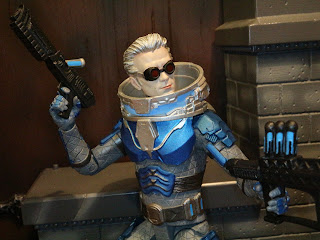 It's time for the same Gotham song and dance: I've only seen about 6 episodes of Gotham and I just haven't got around to watching more of it because I'm terrible at keeping up with most TV shows. That's not going to keep me from picking up a cool action figure of a Batman villain, though, especially when it's Mr. Freeze and he's $15 dollars. Yes, this is one of the Toys R Us releases that Diamond Select Toys is becoming known for: While he lacks the larger alley way display piece the later figure will come with (it's not out yet, so this is kind of a pre-release) it's also $10 cheaper. I'm not sure Mr. Freeze has ever had a character design that I didn't like (even Arnold had the look down in "the film I dare not name") and this one seems pretty slick. Played by Nathan Darrow, a quick glimpse at the Gotham wiki gives me the impression that this version of Victor Fries has a backstory that borrows heavily from the origin Paul Dini wrote for Batman: The Animated Series epsiode "Heart of Ice." You know, Mr. Freeze owes quite a bit to television: Not only did his most well known origin come from the animated TV series but the name Mr. Freeze was first used in the 1966 TV Series (in his first appearance in 1959's Batman #121, he was called Mr. Zero). Let's take a look at one of my favorite ice powered characters after the break, shall we? 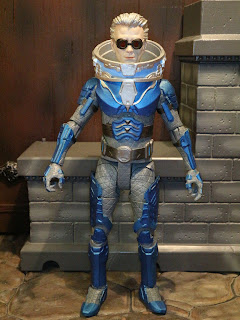 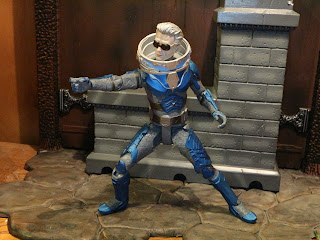 * Diamond Select is really improving their articulation and Freeze is another solid toy, especially considering that he's an ice themed guy in a heavy exo-suit. I'm not usually a fan of H-hinged hips but they actually look pretty good here. The joints also feel quite durable and have a decent range of motion. Victor looks pretty boss in various free-ray firing position. 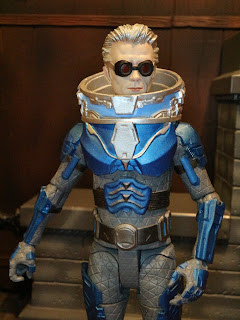 * As I mentioned earlier, I'm not sure that Mr. Freeze has ever had a bad costume design. There is just something about the character's general design that's hard to mess up. I love this look, particularly the inclusion of the Mike Mignola originated red goggles, the heavy armored bits all over his body, and the grey quilted suit underneath it all. Freeze is a very impressive figure. Considering how well sculpted this figure it, it really makes me wish that Diamond Select would get a whack at a comic based DC license at some point. 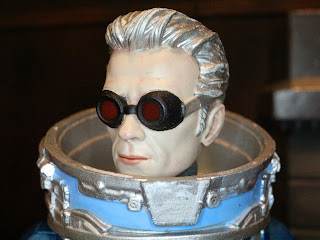 * I'm not at all familiar with the actor who plays Mr. Freeze in Gotham. Looking at a few stills definitely makes me think that Diamond Select did a good job, though. In fact, I think this is just a good Mr. Freeze sculpt in general. I know Mr. Freeze doesn't usually have hair, but I like the inclusion of the silver/white hair, the pale face, and the red goggles. I flipping love the red goggles. If it were socially acceptable, I'd wear goggles all the time. 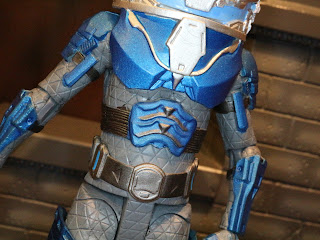 * The armor plates look excellent and the suit underneath has a nice textured pattern that definitely looks like something used to regulate body temperature. The large chest piece/ collar is a separate piece permanently attached to the torso. 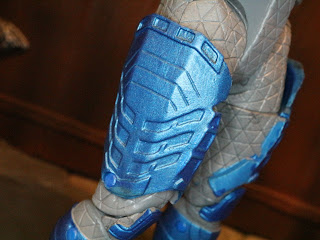 * I'm a sucker for metallic blue, so I'm absolutely digging Freeze's armor. I love this shade of metallic blue! I want to dye my hair this shade. I want to run around with metallic blue hair, wearing red goggles, and rocking a cape and a vest. 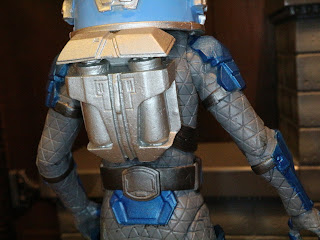 * It's not removable, but Dr. Fries is also toting around a big ol' backpack. The sculpt is fairly intricate and I love the look of this. The top piece is actually a flexible shield of sorts that seems to protect the valves on the canisters. You can lift the shield up and look in at the valves. Cool, huh? 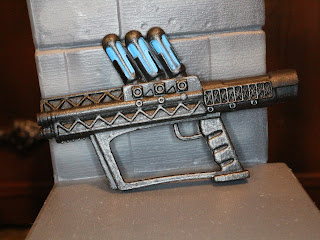 * Mr. Freeze comes with two different freeze-rays. The first has three canisters on top and a front stock. The paintwork and detail on these are incredible. I think Diamond Select is doing some excellent work on accessories lately. They're definitely even giving NECA a run for their money. 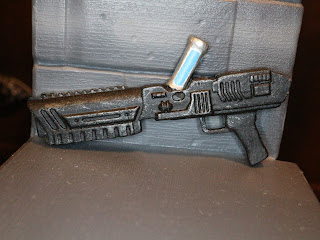 * The second freeze-ray is a shorter weapon, but it's no less detailed. It only has one canister on it, although the canister design is different. 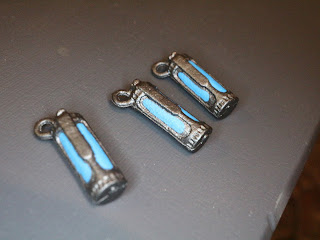 * Mr. Freeze also includes three ice grenades. While these play a role in the TV show, I know a few collectors will be wanting to add these to their Arkham City Batman figures to upgrade his arsenal. These are simple, but the sculpting is nice and the inclusion of paint applications is far beyond what we see with most mass market toy lines. How does Diamond Select give us more product for a cheaper price than companies like Mattel and Hasbro? 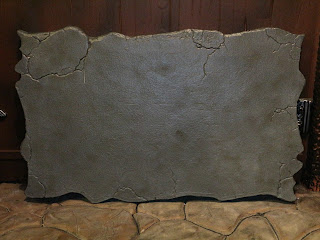 * Like Azrael, Mr. Freeze includes a flat base that looks like a piece of concrete (the standard direct market release will come with an alley way chunk). The sculpting is impressive and features lots of cracks and dents as well as a dark, oily wash. It truly captures the worn, rugged beauty of a Gotham City parking lot. 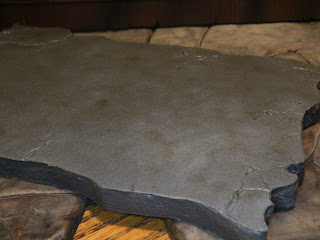 
* You know what would have been nice? If the display base had a foot peg or two to allow the figure to stand on. 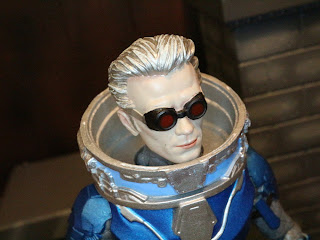 * OK, this is completely a personal criticism of the figure: I do feel that Mr. Freeze looks very odd not wearing a dome over his head. I know that Diamond Select is being faithful to the look of the show, so I'm criticizing the design here more than the figure. Still, it's hard for me to see Mr. Freeze without a dome. He just looks so cool in a dome. While I wouldn't want to wear a dome (it wouldn't go with my goggles, metallic blue hair, cape, and vest), I want Victor Fries to sport one all the time. 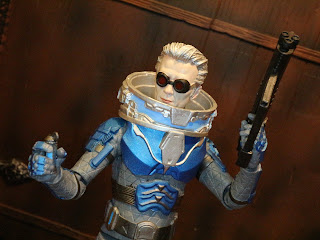 For $15 clams, this guy is Epic. Mr. Freeze is an incredible figure whether you're a fan of Gotham or just like Mr. Freeze. I think the design (other than the lack of a dome) is still strong enough that most people would recognize this character without being familiar with this specific incarnation (although I'm sure a couple of folks might initially think this is Captain Cold). Excellent sculpting and paintwork, incredible accessories, and a solidly built toy at $5 bucks less than the competition definitely has me sold.

If you're looking for other Gotham action figures from Diamond Select Toys, I've reviewed the following: