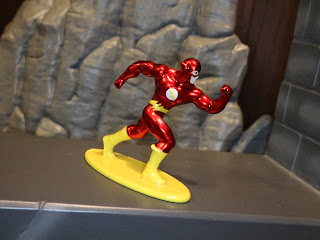 Yesterday I looked at one of the weaker figures in the new DC Nano Metalfigs line by Jada Toys and today I'm looking at one of the stronger figures: The Flash. While my biggest complaint with Desert Batman is that he has a fairly neutral and bland pose, the Flash avoids repeating that design flaw by having a dynamic pose. Since these little guys are made of die-cast metal, they can take dynamic poses much better than many minifigures that can sometimes wilt or tip over. Having a solid metal base on these really helps in displaying them, too! While these are currently exclusive to Wal-Mart, they should be hitting stores everywhere in the next couple of months and, especially considering their price, I think they make a pretty cool addition to both the toy aisle and to your toy collection. Let's take a closer look at the DC Nano Metalfigs the Flash after the break... 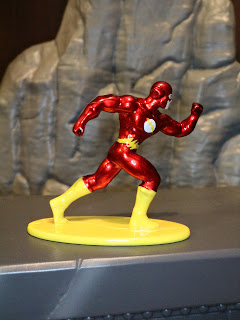 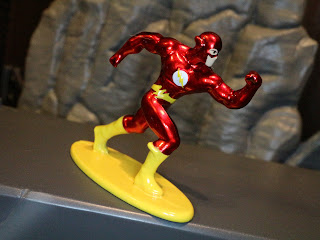 * Considering that this guy is only around an inch and a half, this is a pretty nicely detailed minifigure. The paintwork on the Flash's costume is excellent, especially the deep, metallic red used! Heck, even Flash's lightning bolt logo and his eyes are well done in this scale. 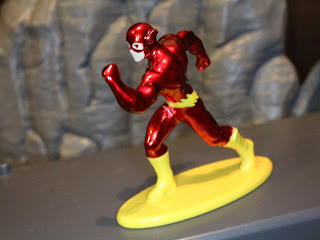 * The pose is what really makes this one exciting! I love the running poses here and, the way the head is positioned, it looks good from the side and the front. I'm really digging this one! There's just something immensely satisfying about these little guys in hand. Being made of die-cast metal, they just feel really high quality;. 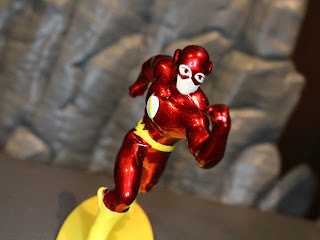 The Flash is one of my favorites from this series and was one of the first four figures I purchased from the series. If you're curious about picking up a figure or two from this set, make sure the Flash is one of them (although take note that he also appears in one of the 5-packs, too). He has a great pose, a fair sculpt, and some really nice paintwork. Flash is instantly recognizable and makes for a Great and a 1/2 minifigure to add to any DC Collection. There's also a DCEU version of Barry Allen based on his appearance in Justice League, so Flash fans will be wanting to keep an eye out for that guy as well. I don't think he' actually out yet, though, so keep search those pegs!

If you're looking for more Flash collectibless, check out my review of Mezco One:12 Collective The Flash, the Lego DC Universe Riddler Chase which comes with a minifigure Flash set, and my review of the Lil Bombshells Flash (Jesse Quick). For more reviews of Nano Metalfigs, check out the following: