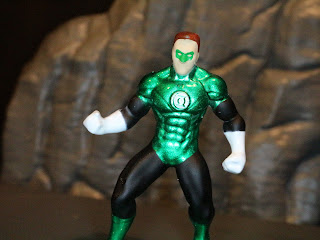 Here's another cool minifigure from my most recent toy run: The Green Lantern from Jada Toys' die-cast metal DC Nano Metalfigs! While the package simply calls this Green Lantern, this is clearly Hal Jordan. By the way, is anyone else kind of weirded out that the upcoming Justice League film features a Justice League without a Green Lantern? I mean, I know Martian Manhunter isn't there either, but the current roster needs at least one more member! I'm really hoping that we get a tease of some Green Lantern in this film. While it'd be cool to see Hal Jordan in the DCEU, I'd be fine with one of the newer Lanterns, too. Jessica Cruz and/ or Simon Baz would definitely be cool additions. Heck, how cool would it be to have the trio of Jessica, Simon, and Hal show up? Anyways, I'm not getting sidetracked because instead of multi million dollar Hollywood films, I'm supposed to be talking about a 97 cent metal minifigure. Let's check out the Green Lantern after the break... 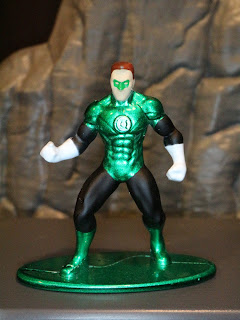 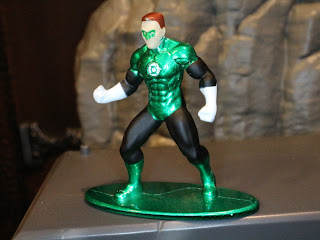 * Hal Jordan is looking pretty slick here. The metallic green paint on his costume and stand look really snazzy and just exude classiness. He really is one of the best looking figures in this series and I'd lump him in with Supergirl and the Flash as the best this line offers thus far. His sculpt is pretty detailed for being smaller than 2 inches and the Green Lantern Corps logo on his chest and his mask are well painted for such a tiny figure. My Hal looks to have a small paint chip on the front of his hairline, but you really have to look close to notice it. 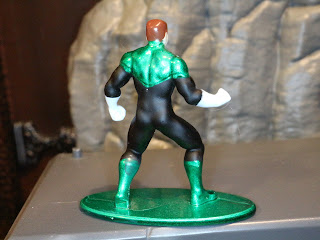 * One of the interesting things about this minifigure is that his costume is a mixture of green, shiny metallic paint and non-glossy black paint. I'm not sure I've seen this effect on any of the other DC Nano Metalfigs I've looked at, so it does make Hal stand out from the pack. I really like the dichotomy between the two paint types. 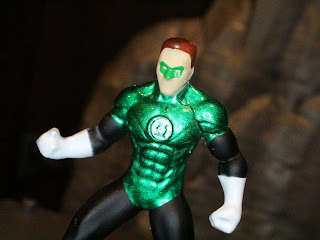 For a buck (or less!), I really don't think you can go wrong with these little guys. If you're a DC fan and you like minifigures, these should definitely appeal to you. The die-cast metal classes things up quite a bit and the above average paintwork in this scale certainly makes you feel like you're getting a value for your dollar. Green Lantern is one of the best minifigures in this line and is absolutely a Great and a 1/2 mini. If you spot him, pick him up and let him guard your desktop, bookshelf, or toy shelf. Heck, tuck him in your medicine cabinet and let him help you fight plaque every night when you brush your teeth. No cavities will escape his sight!


Oddly enough, this is the first Green Lantern themed item I've reviewed on the site! I have reviewed more DC Nano Metalfigs, though: