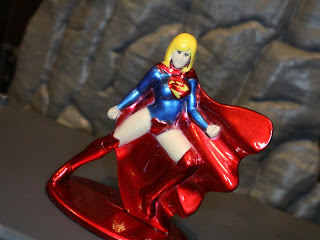 Today I'm checking out the fourth figure I picked up the first time I ran across these cool die-cast metal DC Nano Metalfigs from Jada Toys: Supergirl! Decked out in her New 52 outfit (which a good deal of licensees still seem to be using), Supergirl is a pretty cool looking minifigure. Again, I must point out that these figures are less than 2 inches tall, so seeing pictures of them close-up doesn't quite do them justice; it actually makes them look larger and shows off more of the imperfections in the paintwork. In person, though, these are incredibly appealing. Let's take a closer look at Supergirl after the break... 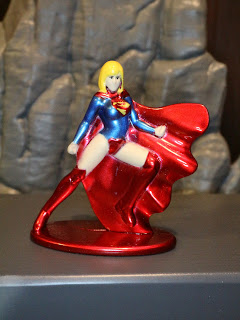 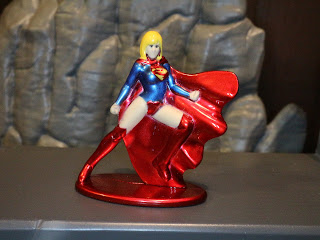 * There are quite a few things I dig about this minifigure, the first being the paintwork. Yeah, I know she's not perfect but, on a figure this small, I think she looks incredible. Jada Toys did a nice job capturing Kara Zor-El's costume. I'm absolutely loving the metallic colors on these and Supergirl's primary colors look gorgeous! The "S" logo looks a bit off if you stare at it too much (it doesn't really look like an "S") but overall the visual appeal of the figure is pretty high for such a small piece. 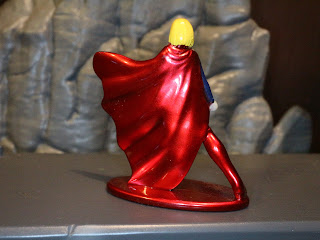 * I'm kind of mixed on the pose. I do like that's it's more dynamic than just Supergirl standing, but what exactly is she doing? Hovering? Landing? Taking off? It's not a bad pose, but it's a bit difficult to decipher. Still, the flowing cape does add to the overall appearance. 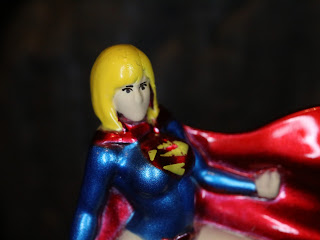 I'm really liking these little figures. It's nice to have something cool and collectible available at such a low cost. Plus, the allure of the die-cast metal used to make these isn't lost on me; while they're not similar in scale, they do kind of remind me of metal toylines from my childhood such as Hasbro's Action Masters or the miniature metal Jurassic Park dinosaurs from the original film. This is a fun representation of Supergirl in a cool costume, and it's well worth the buck you'll spend on it. Definitely a Great little minifigure!

Currently, the only other Supergirl figure I've reviewed on Action Figure Barbecue is the Supergirl from the DC Super Hero Girls Action Pack six figure set!