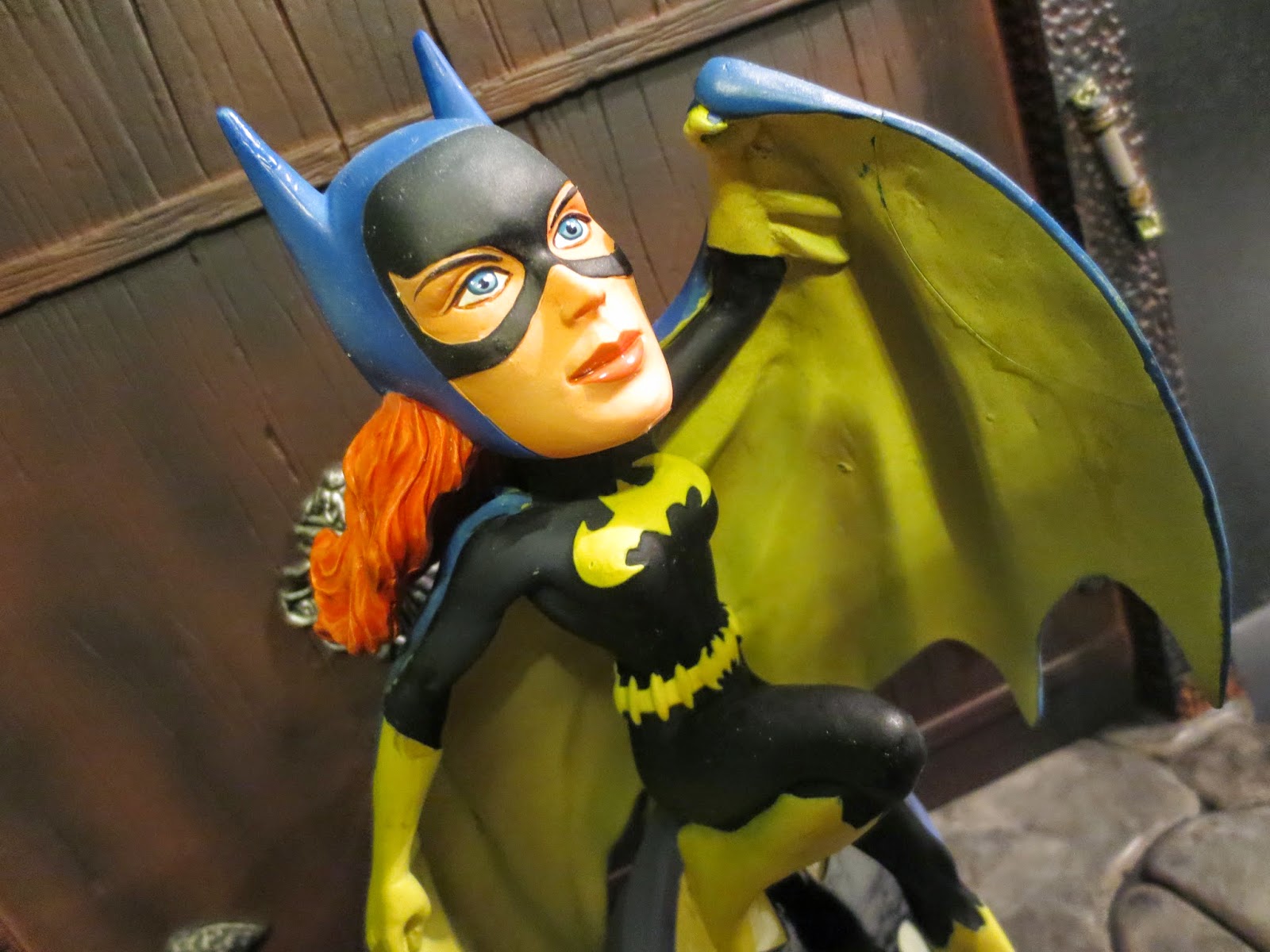 As you probably already know, I'm a huge fan of Batgirl. It's gotta be Barbara Gordon, though. Betty Kane, Cassie Cain, and Stephanie Brown are certainly worthy and interesting heroes, no doubt about it, but nobody tops Babs in my book. While I'm always picking up new and interesting Batgirl products, I also do lots of online searching for older stuff I don't have, particularly statues, busts, and action figures. A month or two ago I learned about this bobble head from Monogram Masterworks. It was was released in 2004 under their Headstrong Heroes line which was billed as a line of "Dynamic Bobble Heads," probably due to the more action oriented body sculpt. I watched a few online listings until I found one for a pretty good price for one new in the box (probably under $20 bucks shipped) which I jumped on. A few days later she arrived at my door. Unfortunately, I did have some quality issues with this bobble head. It wasn't due to the shipper, as the figure was safely packaged and find before I removed it from the package. It seems that perhaps the materials have broken down some overtime. As you're watching these pictures, I'll note a few areas where I had to do some repairs on the figure. Ready for a closer look at this bobbling bat babe? Then join me after the break.... 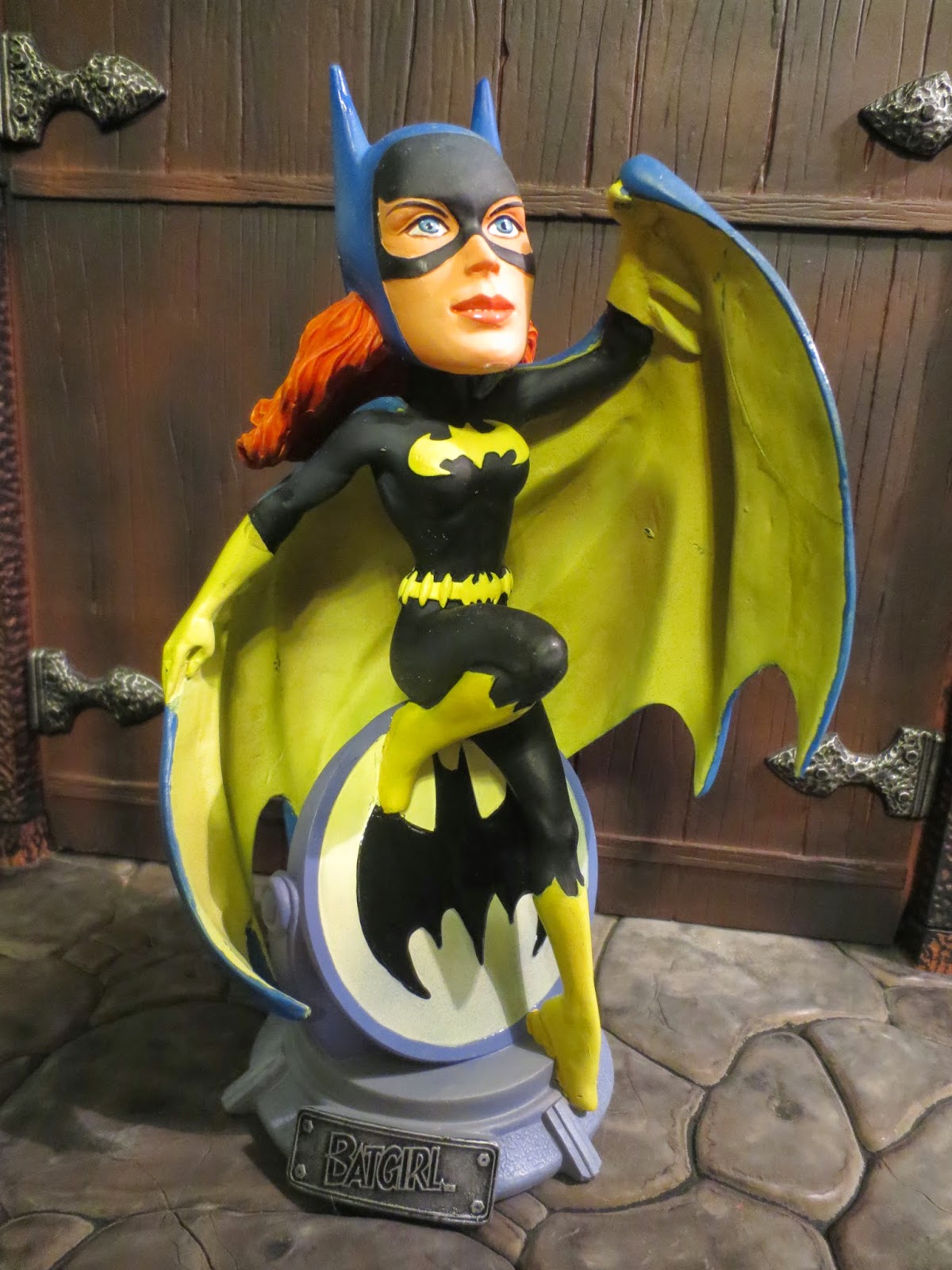 The Facts:
Height: About 8 3/8ths inches from the base to her ears 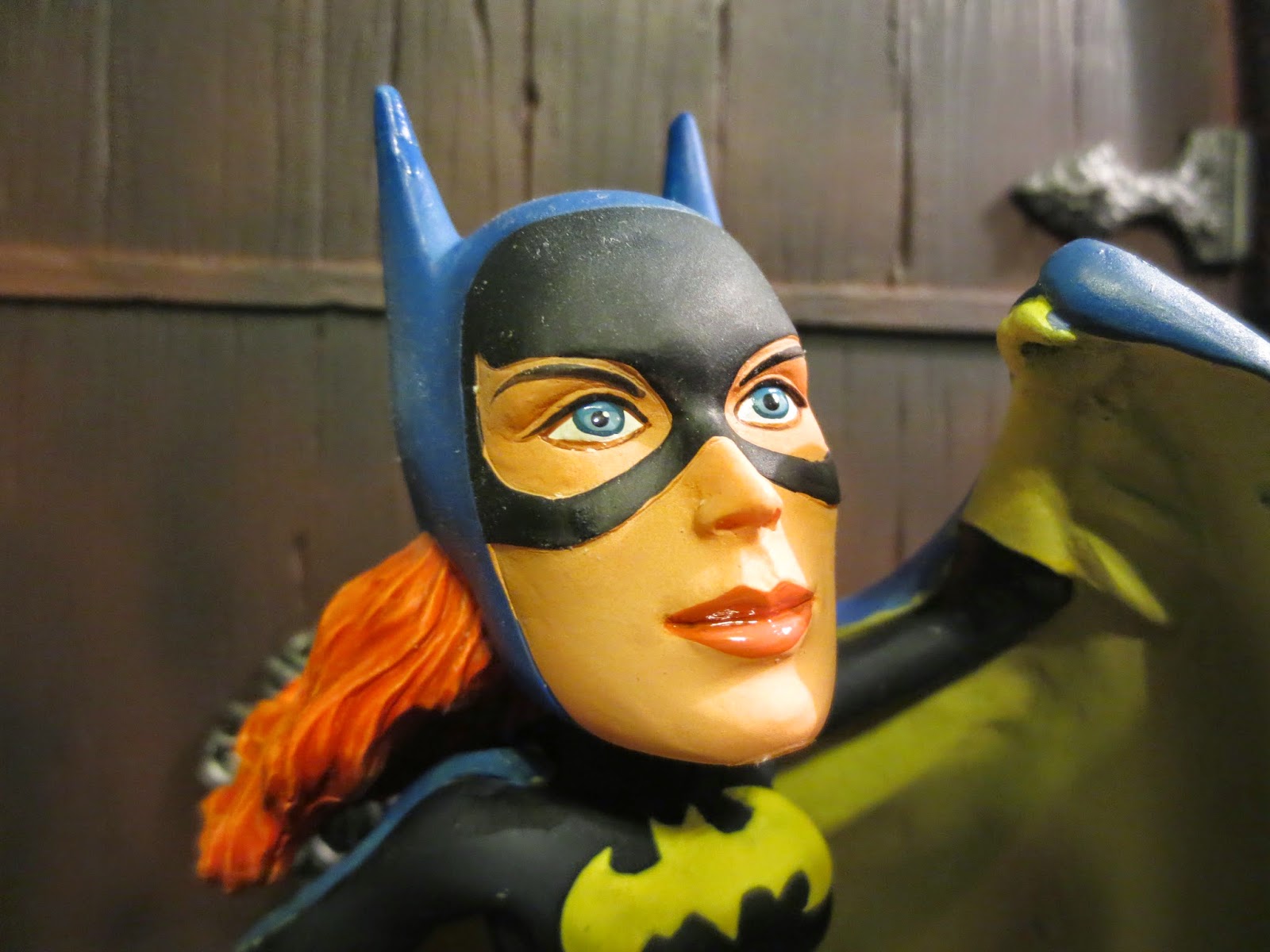 * The sculpt on this figure is really nice. The head looks a bit oversized since this figure is technically a bobble head. Since the attachment for the spring on the neck that gives the bobble head it's bobbling motion broke, I had to create a new neck with Sculpt-it. This keeps the head on securely, but it makes the head look a bit oversized since it is now closer to the body. Regardless of that, it's a solid sculpt and captures the classic Batgirl costume. 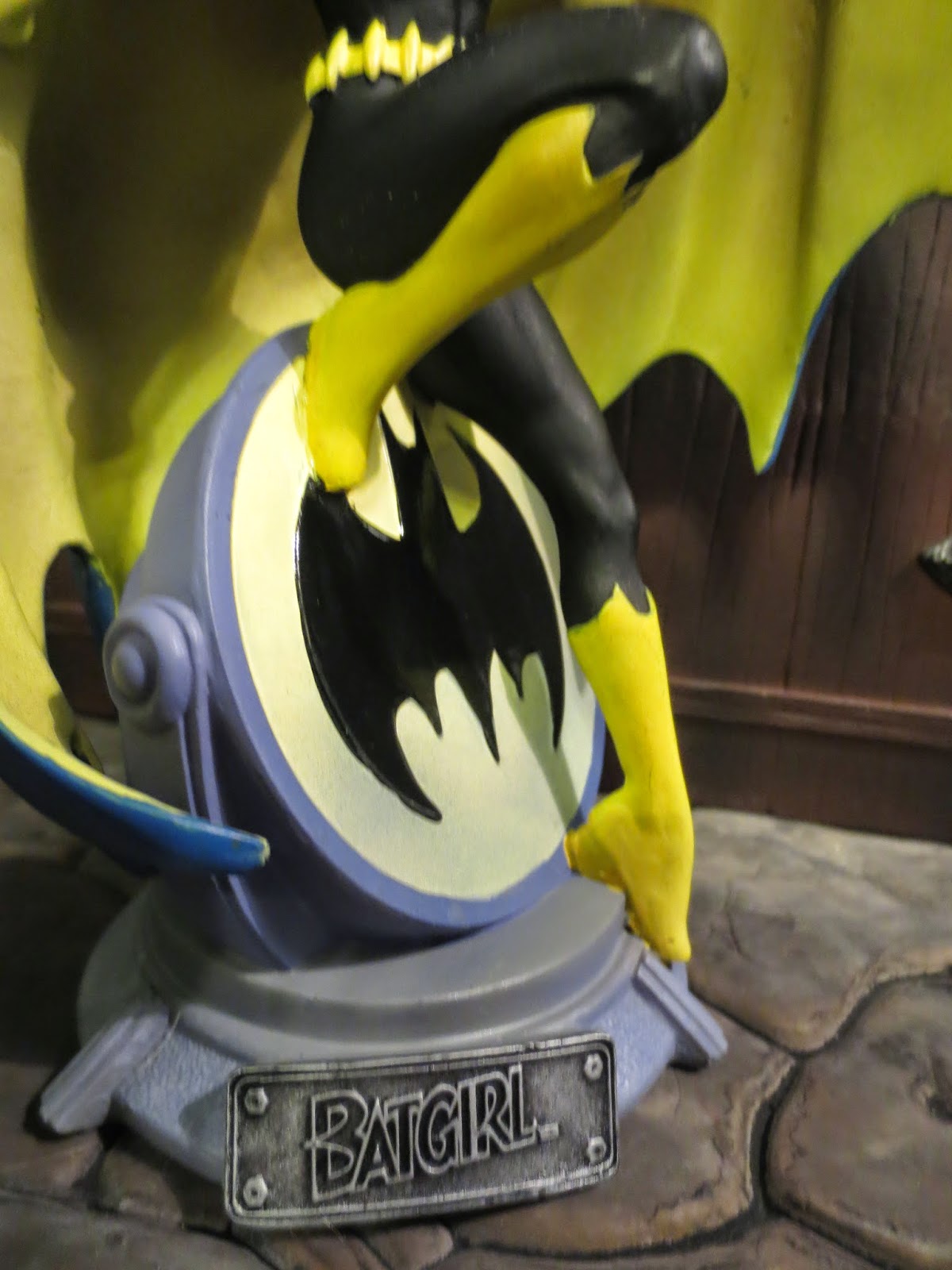 The base of this bobble head is really nice: It's the batsignal with a "Batgirl" name plate. I love when extra environmental elements like this are incorporated in a statue or action figure as it gives the final piece a diorama like quality. I'm definitely a fan of that. Batgirl looks great perched atop the batsignal. It's just a recognizable and fun aspect of the statue. The sculpting is nice as well with quite a few cool little details. It also reminds me of one of my favorite Batgirl statues from my collection: The Batman: The Animated Series Batgirl statue where she's lounging on top of the batsignal. Considering that Babs isn't really linked to the signal in any significant way other than being part of the Bat-family, it's interesting that it was chosen. 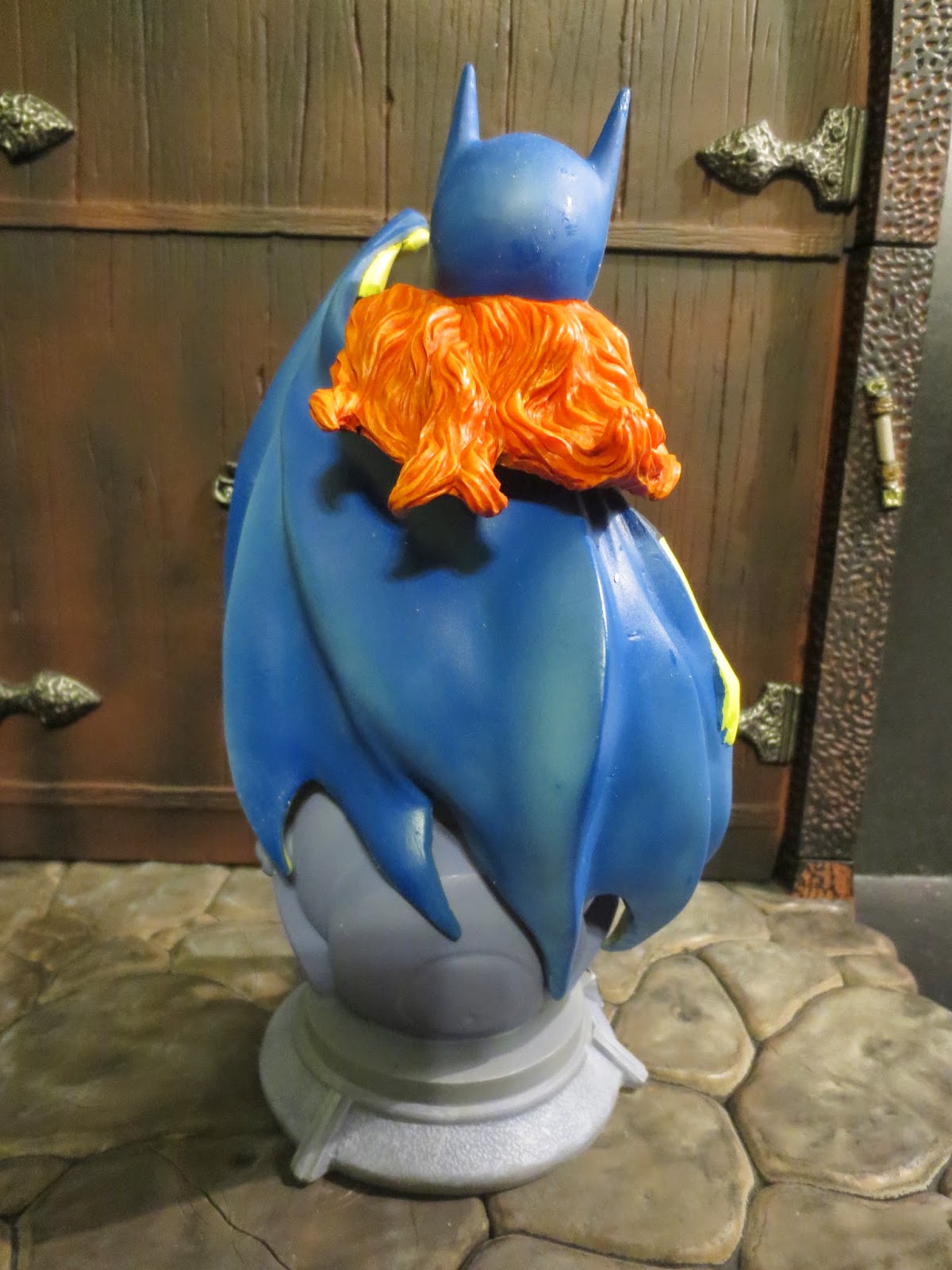 *I mentioned the breakage issues, and that's coming up, but first I want to talk about the paint. The paint applications themselves aren't bad by a long shot, but the paint itself is kind of...tacky? I'm not sure if that's the right word but after handling this piece I found blue traces of blue paint staining my fingertips. (Before I realized what was causing this I thought that maybe Tobias Funke was stalking me.) The darker paint also seems to be encroaching on the space of the yellow paint, which is a bit bothersome and entirely uncalled for. This has got to be the case of the paint simply breaking down over the years, although this piece is only about 11 years old. 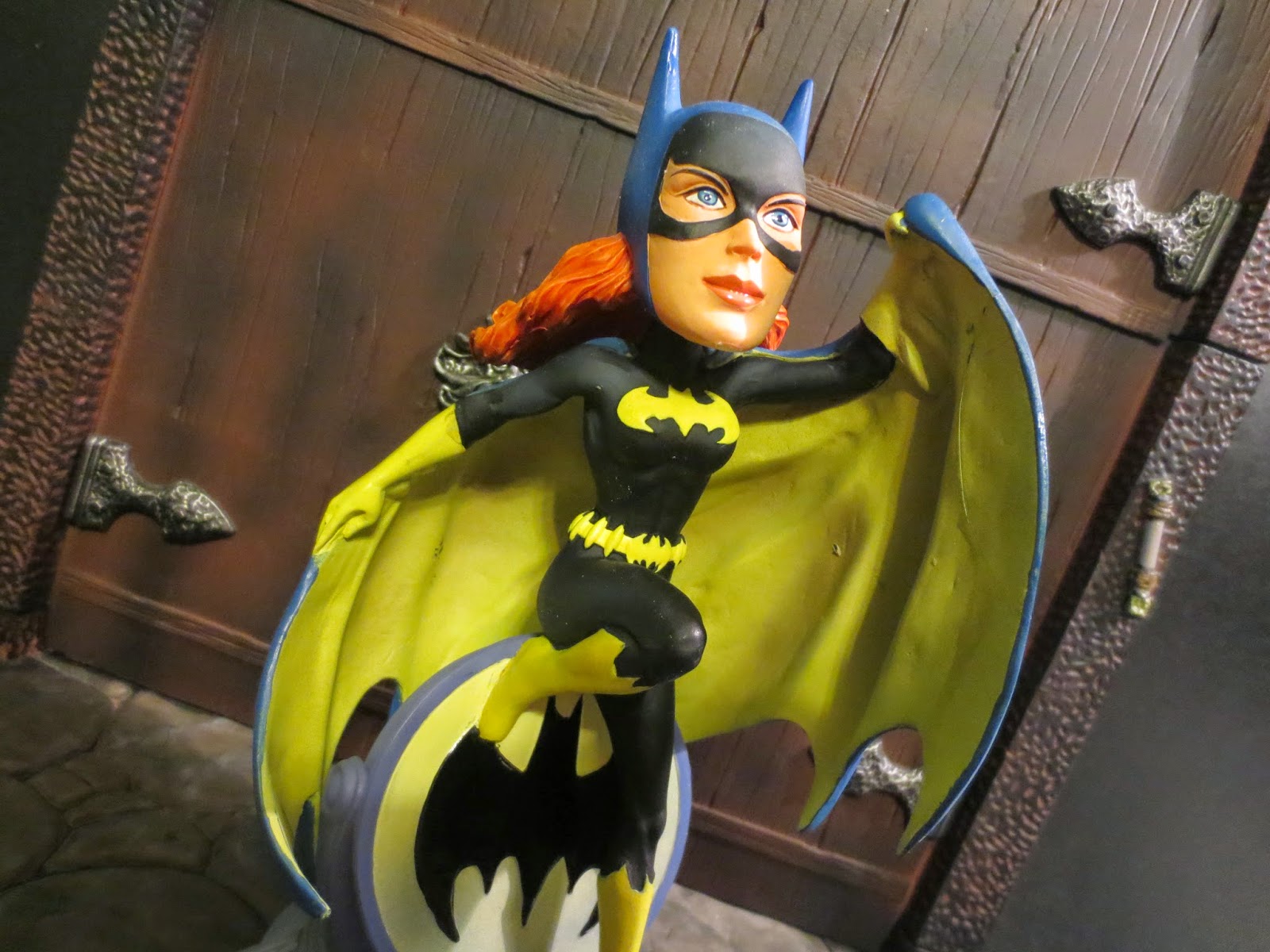 Let me talk about the breakage issues I alluded to earlier. As I mentioned above, this figure came new in the the original window box. It was safely packaged by the seller I purchased it from and it looked great. Upon opening it, though, the head fell off. It appears that whatever attached the spring to the head had disintegrated. When trying to work with the statue the right ear on the cowl just snapped off and a chunk of the left edge of the cape cracked off. Once again, I think this is a case of the materials breaking down over time. I'm not sure what the statue is made of, but it seems to be problematic. 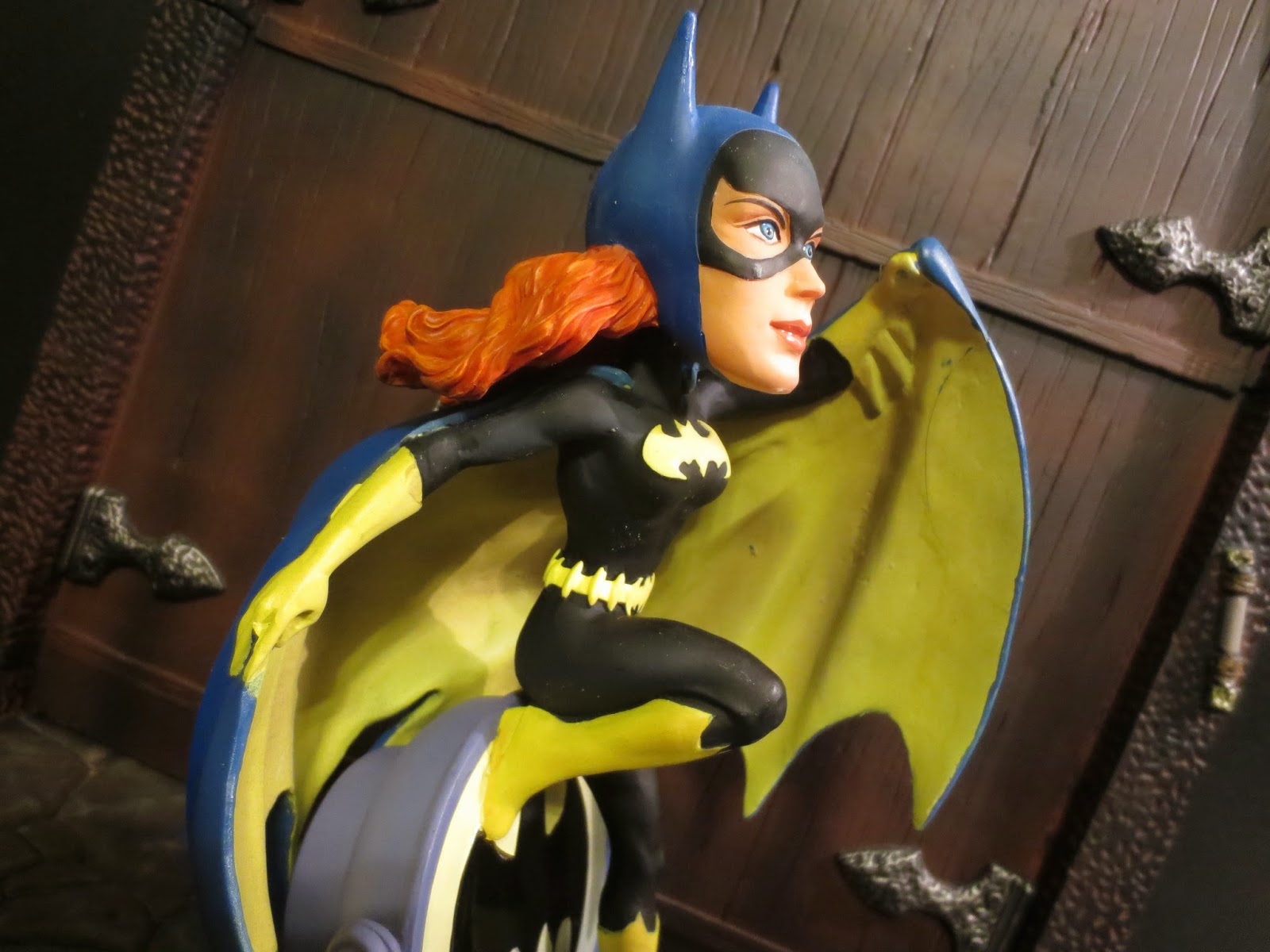 After sitting down to fix the neck and glue the cape piece and ear back on, I'm happier with the statue. It is a nice piece and it's a real shame that it seems to have aged poorly. Being that it's not new, I really have no frame of reference for if this is a widespread problem or not. As a collector of Batgirl stuff, I still wanted this on my shelf as part of my display even with my repairs. For anyone besides the most hardcore Batgirl collectors, I'd recommend avoiding this piece unless you plan on keeping it in the box. That might help to preserve it, although I can't guarantee it. It's tough reviewing older stuff sometimes but, considering the breakage issues I faced, I'm giving this statue a Crap and a 1/2. Serious Batgirl collectors who don't mind fixing their toys need only apply. You deserve better, Babs!

If you're interested in checking out my Batgirl collection, I've got some of it posted right here on Action Figure Barbecue!
Posted by Barbecue17 at 3/23/2015