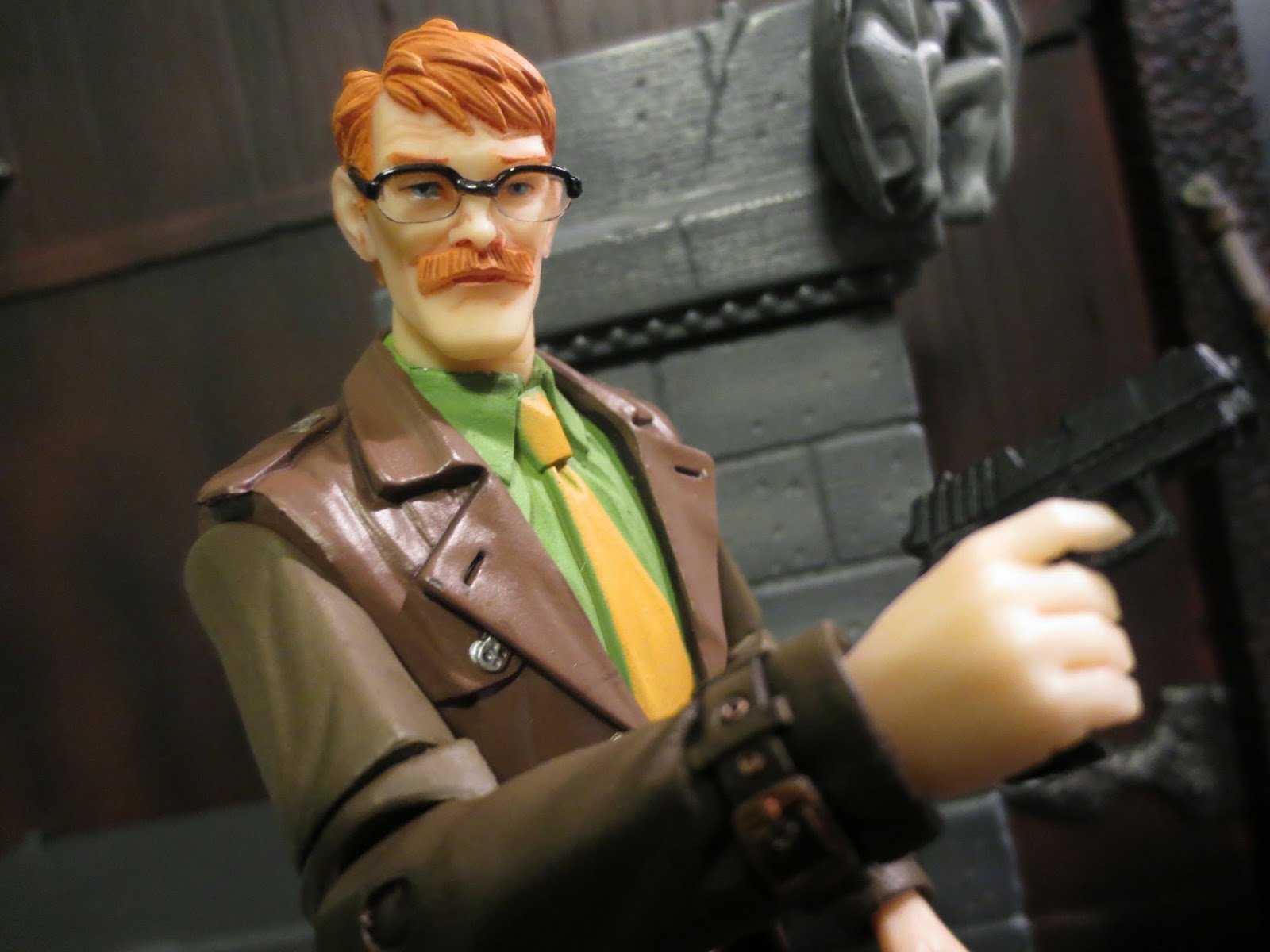 The presence of Jim Gordon is one of the most consistent elements of the Batman mythos. Appearing in the first panel of Detective Comics #27 back in 1939, Gordon has been around since the beginning and I'm hard pressed to think of any Batman adaptation he hasn't appeared in. While we don't see him in action figure form as often as some other Batman allies, looking at my shelf I've realized I'm starting to amass a nice collection of Commissioner Jim Gordon action figures. This version might be the best version of the character yet. Released as part of the third series of figures from the Greg Capullo inspired DC Comics Designer Series, this figure seems to portray Gordon during the events of the New 52 Batman origin story "Zero Year." I find it interesting, then, that DC Collectibles is calling this figure Commissioner Gordon rather than Sergeant Gordon (his rank during "Zero Year") or just Jim Gordon. There's also no mention made of the fact that this is a "Zero Year" tie in unlike the "Zero Year" Batman figure from the same series. Just take a look at this image, or this one: Is there any doubt this is a "Zero Year" Gordon? While Gordon retains his red hair in the New 52 timeline (as opposed to going grey), his hair is typically much shorter. Also, if you've read "Zero Year," the jacket is a dead giveaway. Anyways, naming issues aside, let's take a look at this figure, shall we? 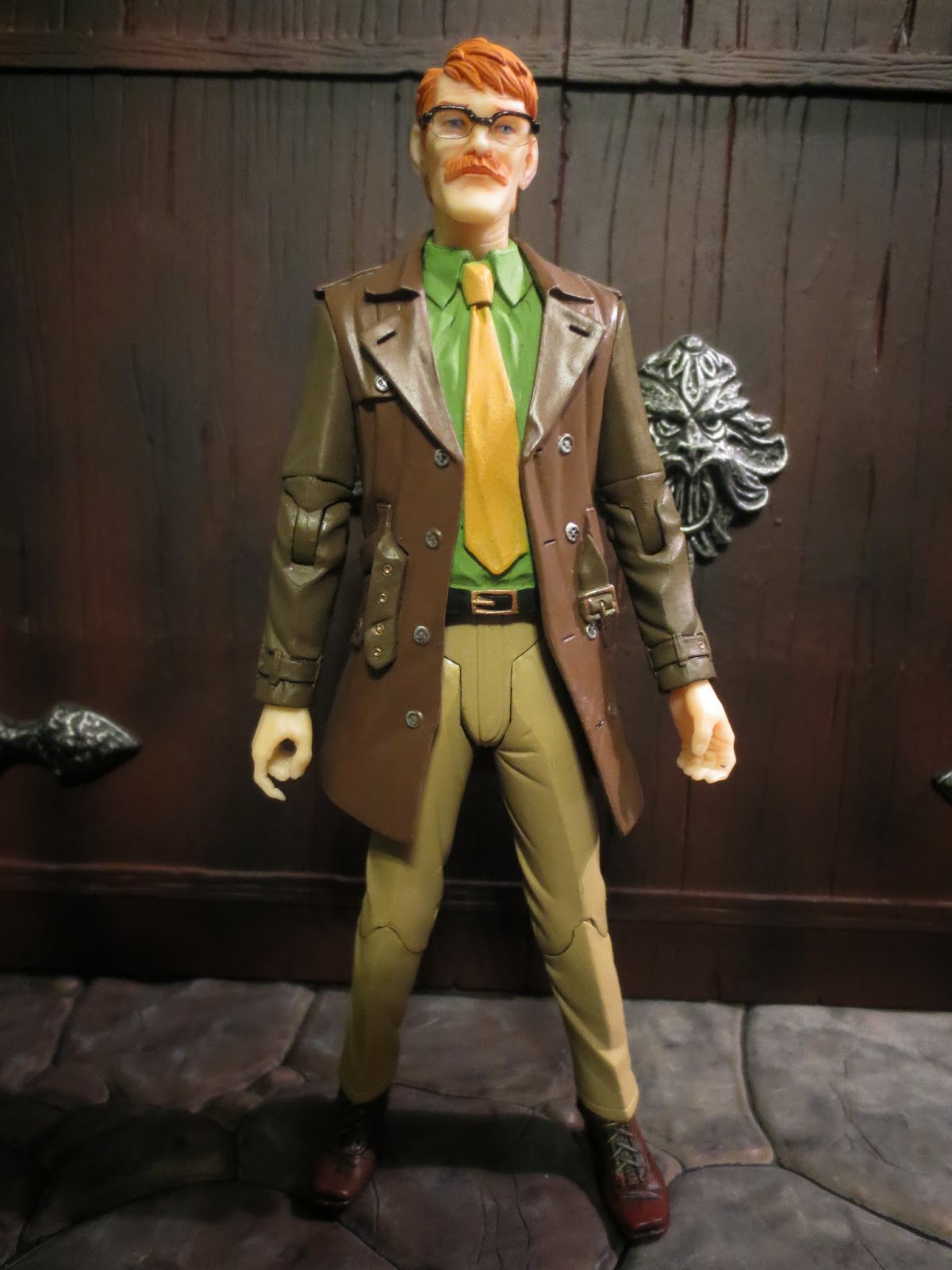 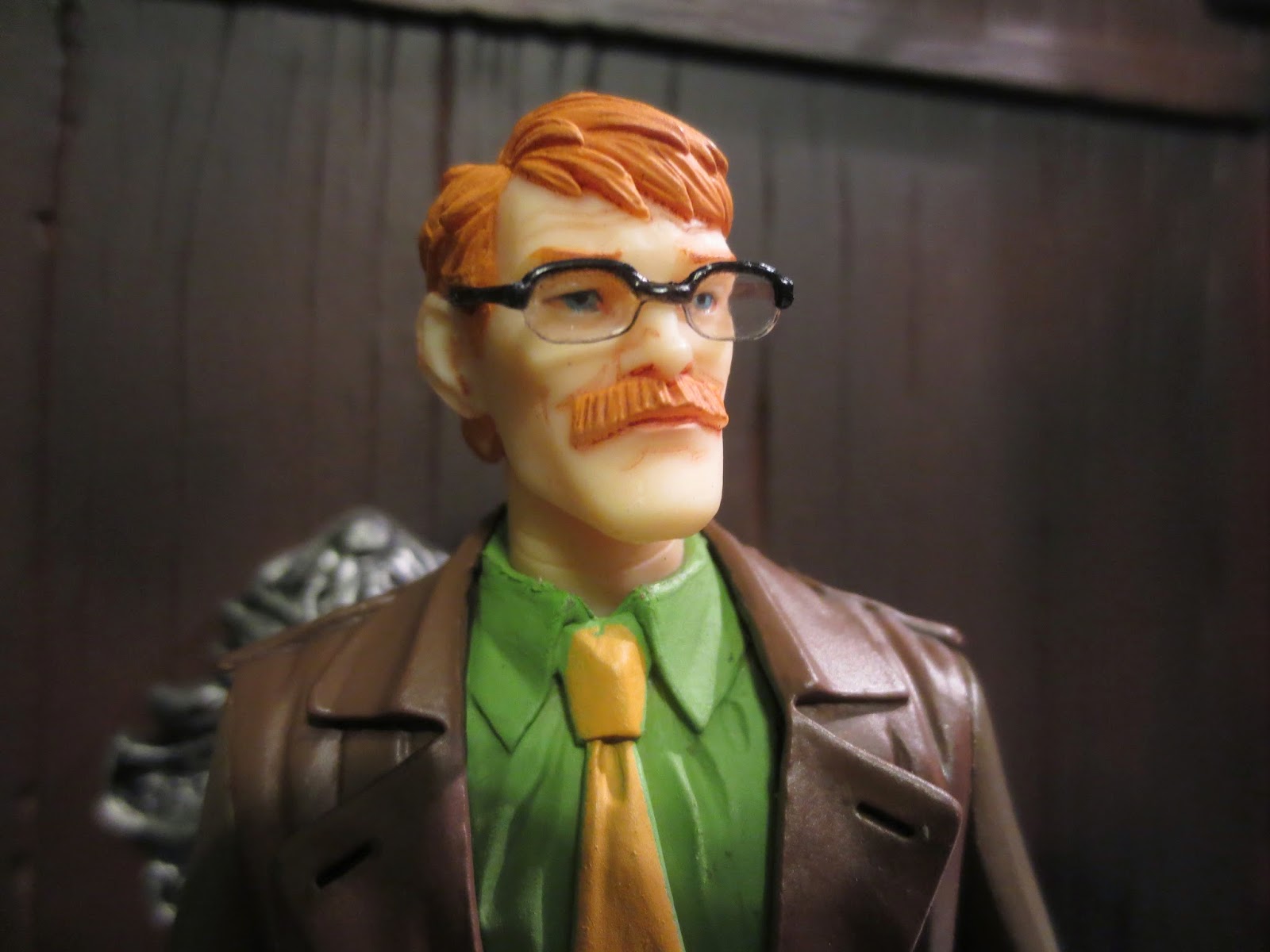 *The sculpt is amazing! I love, love, love the head sculpt as it perfectly captures Gordon's personality. Gordon is a tough guy when he needs to be but he's also kind of unassuming a lot of the time. In some ways he's your stereotypical "cop" but in other ways he' anything but. The head sculpt is perfect and the glasses are excellent. Glasses are often difficult to render in any scale but these are perfectly done. They're not too thick and not too thin: Just right! 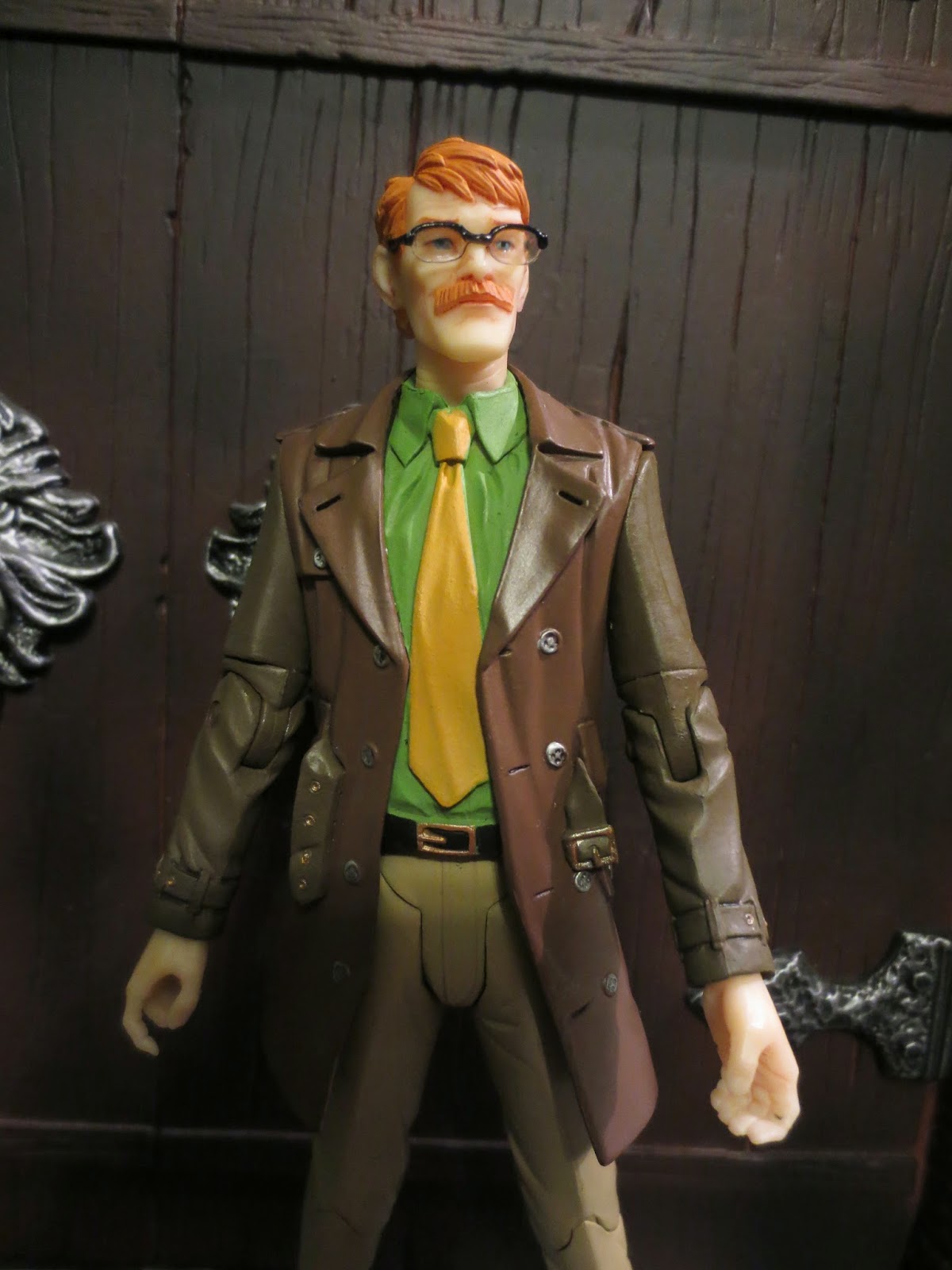 *Gordon's outfit matches his "Zero Year" appearance perfectly. The sculpt is credited to Jonathan Matthews who always seems to do great work for DC Collectibles. Not only is the sculpt really good but the colors pop. I have some issues with the paint work (I'll mention that below) but I like the mixture of Gordon's earth tones. The brown of his coat goes nicely with his green shirt and yellow tie. it's much more interesting than the standard blue, black, and gray we usually see for suits. 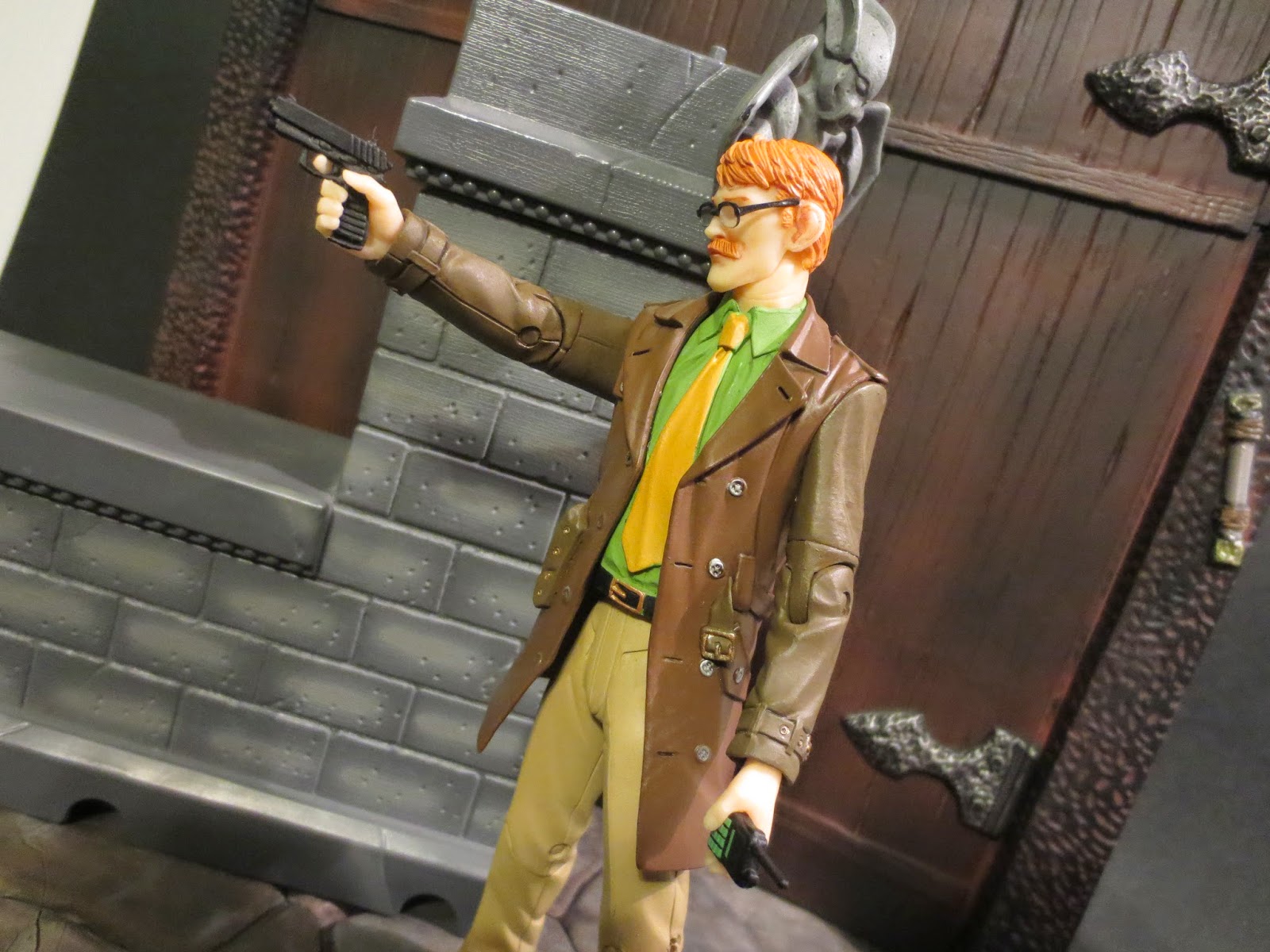 * Gordon manages to walk a nice line between faithfully capturing Greg Capullo's artist specific appearance while still being able to fit in to other Batman collections. While there are some great detail lines on the face and highlights that reflect Capullo's line work, I don't feel that this figure looks out of place when displayed alongside other DC lines such as DC Collectibles' basic New 52 line or even the Arkham-verse figures.

*This figure feels very solid. DC Collectibles seems to have really improved their QC overall and Gordon is another release that I don\t have any fear of suffering breakage. of course, his articulation is much more limited than many other figures, but I'll address that below. 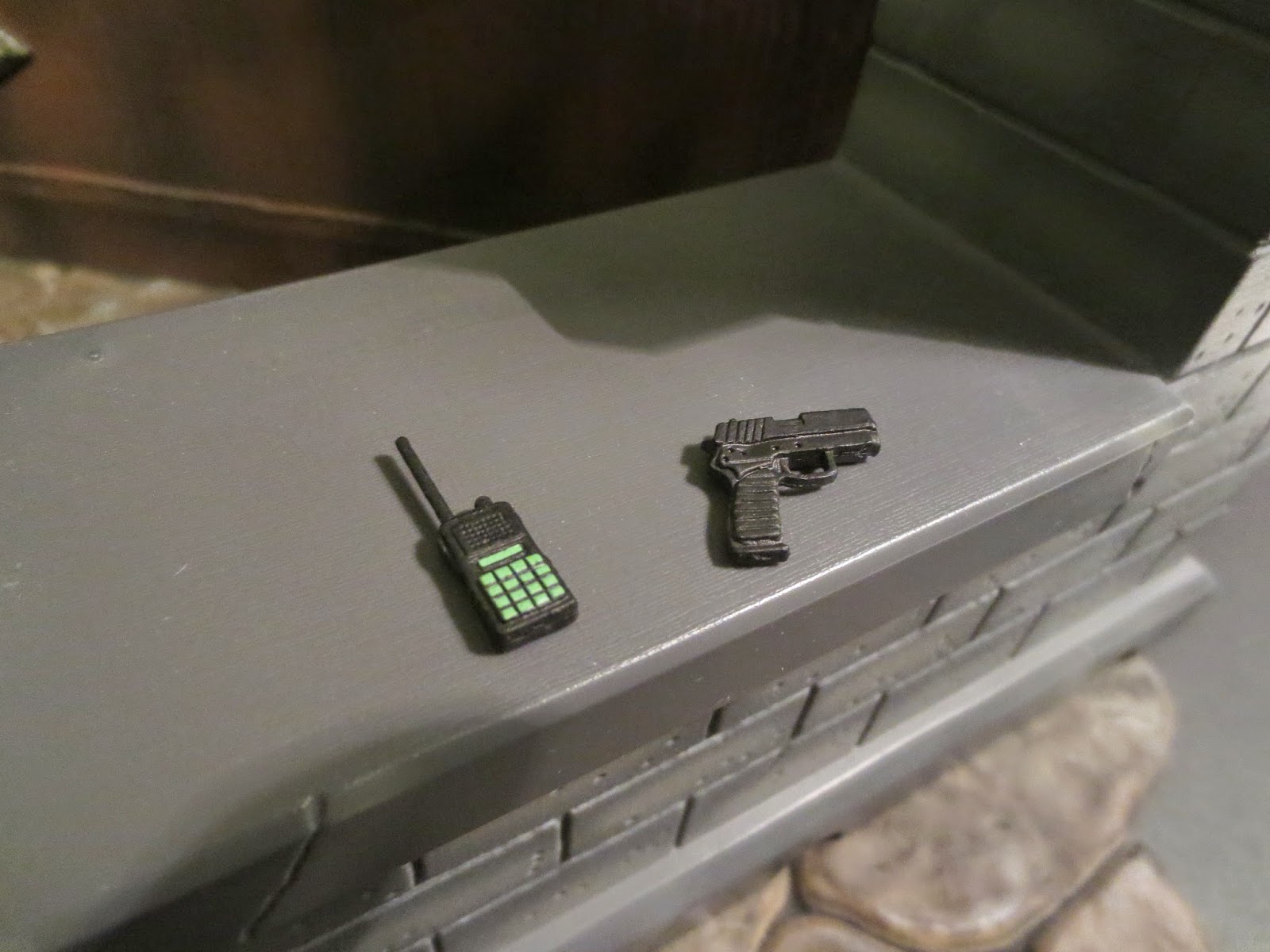 *Gordon comes with two accessories and they both fit nicely in his hands. The walkie-talkie has some very clean paint apps on the buttons while the pistol has a rather detailed sculpt. They really liven the figure up. 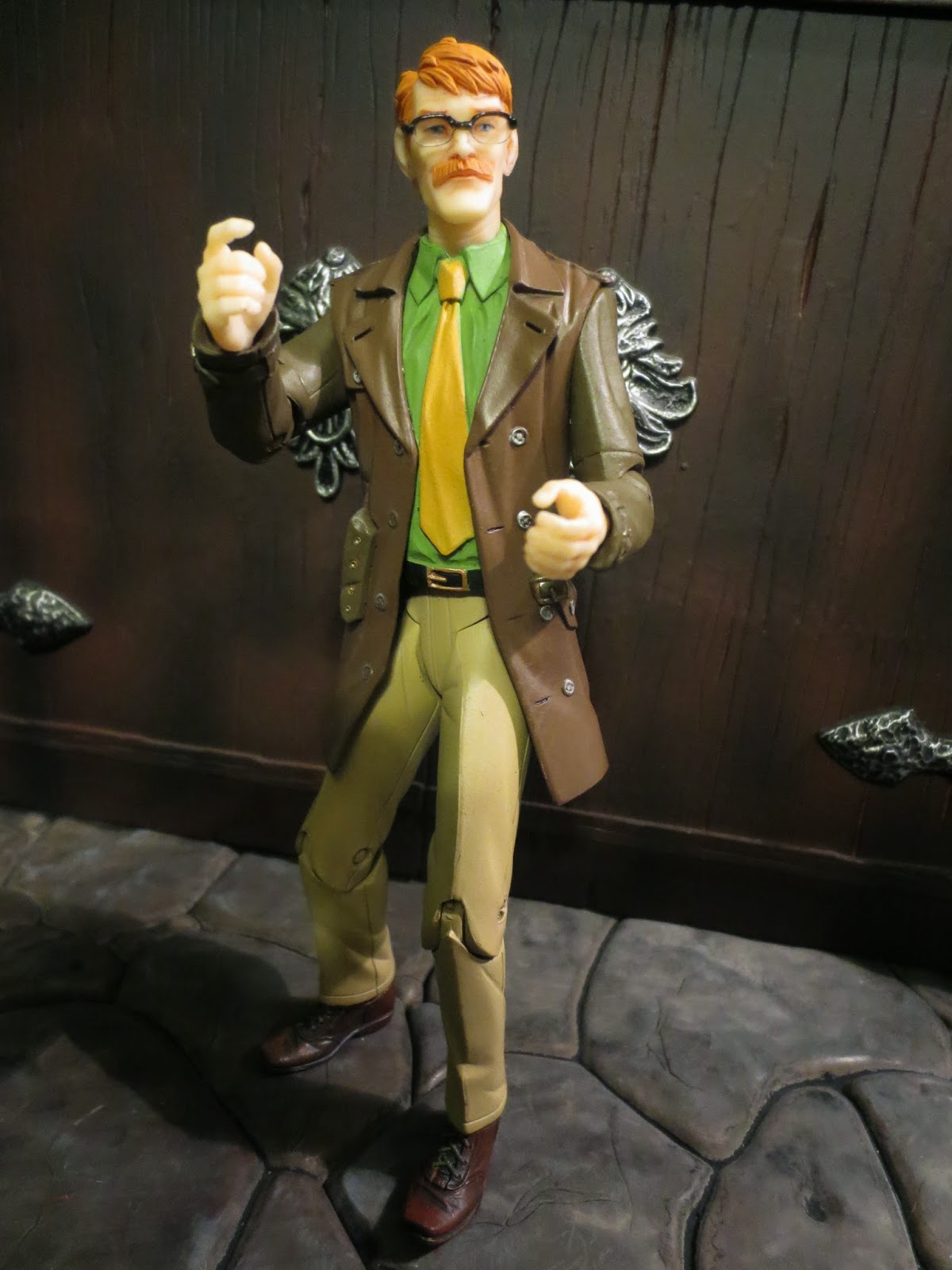 *Gordon's articulation is kind of limited. He has joints in all of the expected places, but the majority of them are simple swivel/cut joints. As I mentioned in my review of Red Hood and Riddler from this same series, I don't mind less athletic characters having more minimal articulation but some form of ball jointed shoulders are still needed. I'm good with the more static legs but Gordon needs some more motion in his shoulders to create some more dynamic poses when using his pistol or his walkie-talkie. 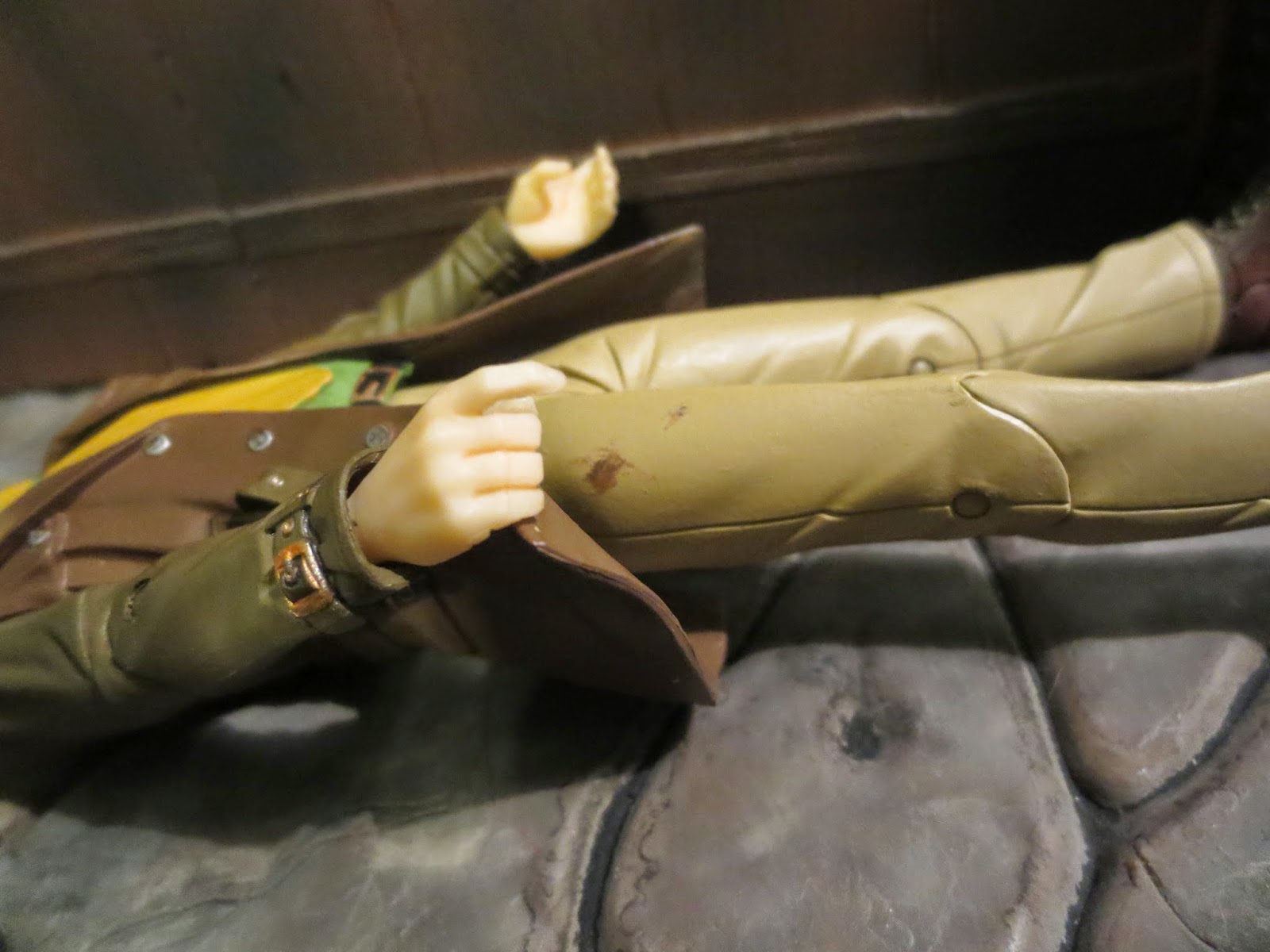 *I love the colors chosen for Gordon's outfit, as I've already stated above, but there are definitely some messy paint problems here. Maybe it's because yellow is tough to paint but the tie is rather sloppy around the knot and the upper edges. The buttons on the jacket are also off in places, although that's much more minor in my eyes compared to two other issues with the jacket. First, the sleeves of the jacket are a different color than the coat. It's not noticeable at a short distance but get this guy in hand and you'll be wondering why Gordon continues to frequent the dry cleaning business he uses. The jacket is made from a softer material, which is a good call, but the paint and plastic colors just don't match. Secondly, the jacket has left some paint smears on Gordon's khaki pants. Fortunately they're hidden by the jacket, but they're still there. 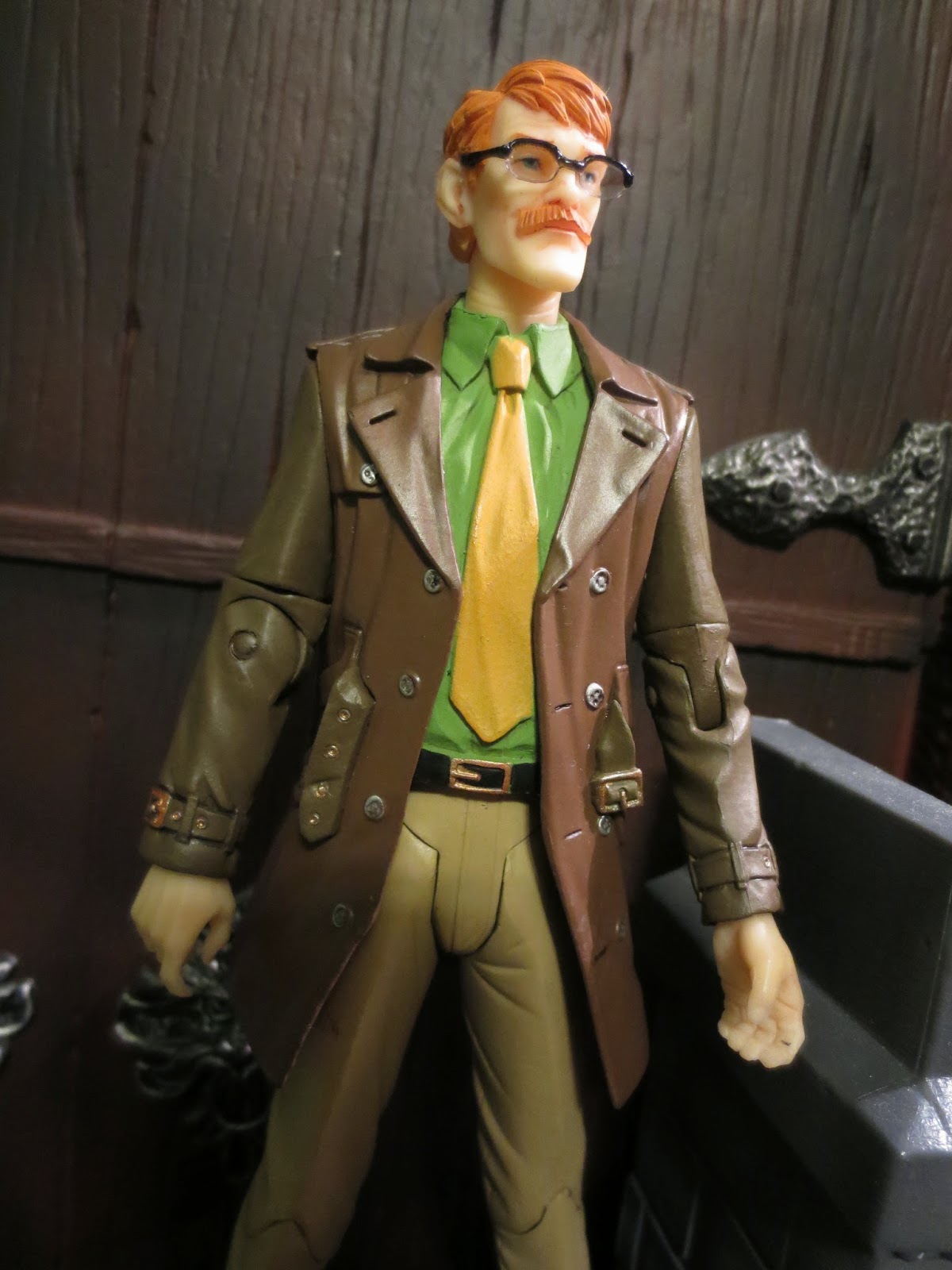 *I'm not sure if I'm going to call this a negative or not, but the base of Gordon's torso is quite a bit larger than his pelvis. If you look up at the figure form below you'll notice it. From straight on or from above it looks fine, but there is definitely something going on. Was this a problem with molding or was this done intentionally to give Gordon a bit of paunch? 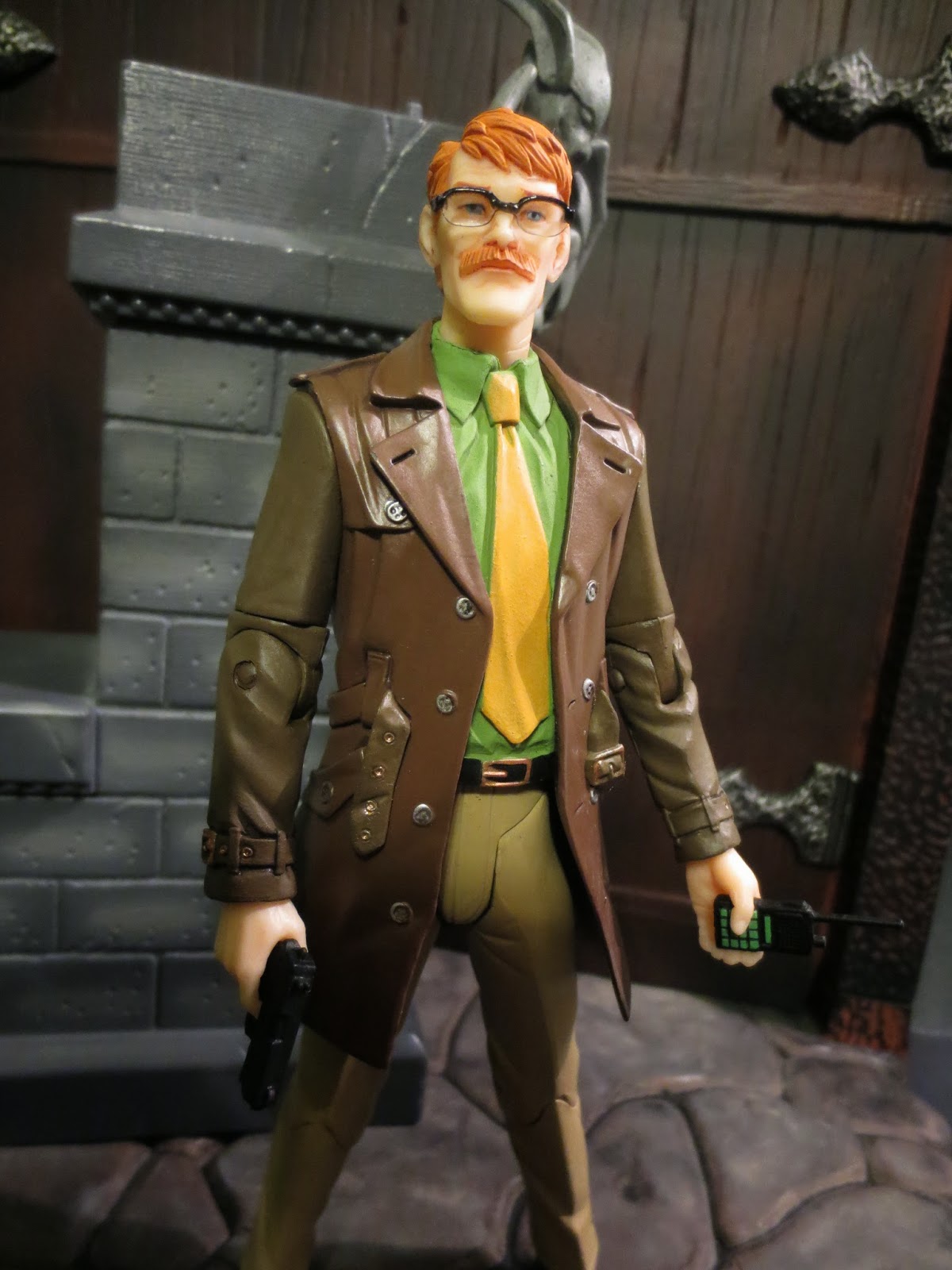 So, I have some problems with Jim Gordon but I can't help but really dig this figure. The great sculpt really captures Capullo's rendition of the character and the color choices definitely help Gordon stand out from just being another guy in a suit. I wish the paint were a bit better, particularly the color matching on the jacket. The limited articulation doesn't bother me as much as I expected it to, though, and I've found that I can get Gordon into a decent number of poses that look great on display. Overall, I'm giving Gordon a Good and a 1/2. If it weren't for the smaller problems, this guy would have easily scored much higher. The off-color jacket and sleeves really, really grind my gears, though. Still, this is a nice version of Gordon and will look great on one of my Batman shelves.


I've reviewed a few other figures from the DC Designer Series: Greg Capullo line by DC Collectibles:
Batgirl
Red Hood
The Riddler
Posted by Barbecue17 at 3/05/2015