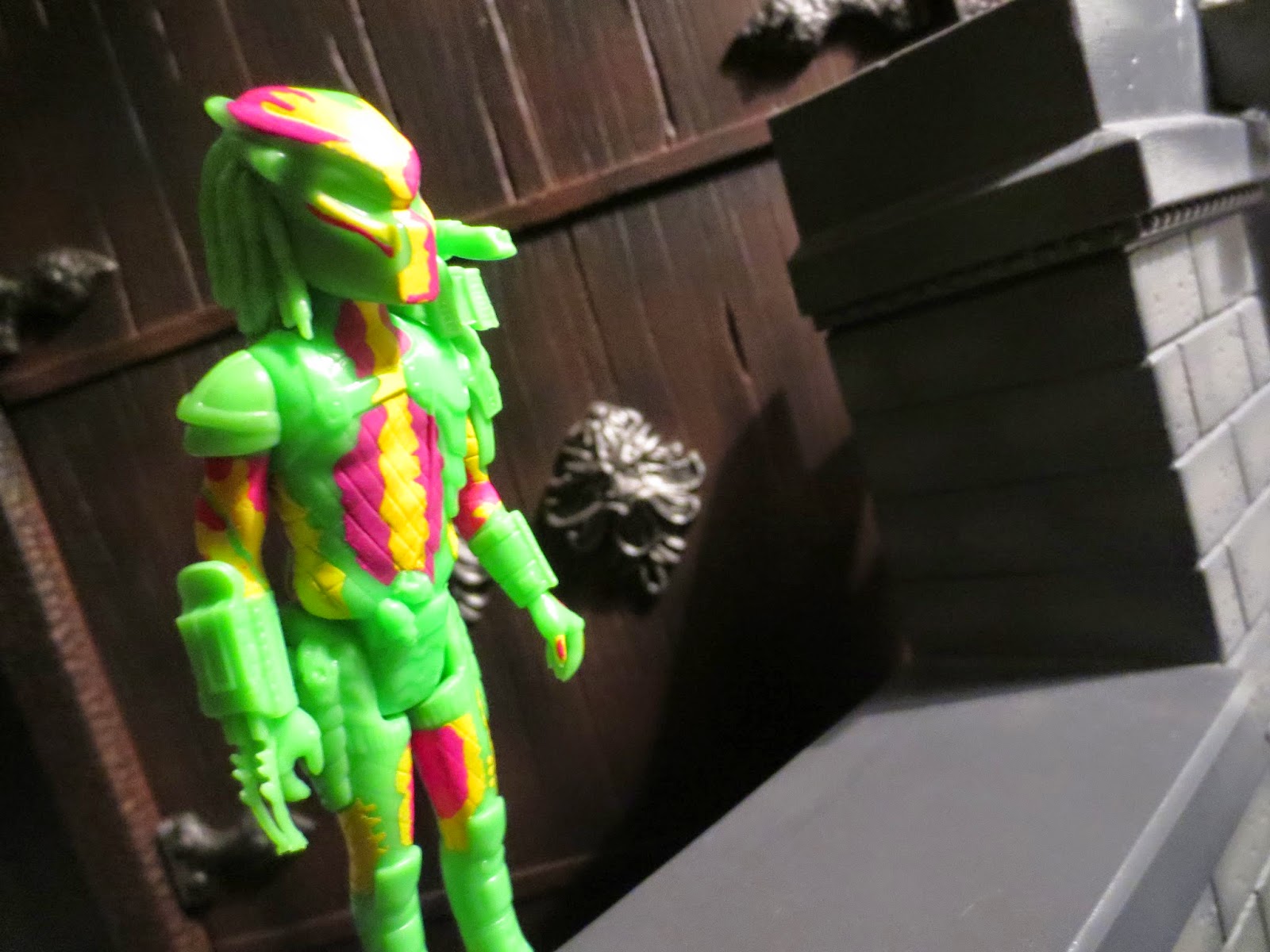 Last fall I stayed at a hotel in Asheville, NC that was within walking distance of Comic Envy, a pretty nice and well organized comic shop that I've visited once or twice before. While I was there I happened to find the newly released Predator figures from Funko and purchased the masked version of the Predator. Anyone who has read some of my reviews of NECA's Predator figures knows that I'm a huge Predator fan. I'd wager that the movie is on the list of my top ten to fifteen favorite films. I'm neither a hardcore collector of Predator merchandise nor a completionist of Predator action figures, but if I see something cool I'm inclined to pick it up. So, when I saw Funko's Toys 'r Us exclusive "Thermal Vision" Predator variant, I had to pick it up. I was captivated by the bright colors and the sheer novelty of the toy. Of course, a minute or two after picking this up, I started thinking to myself: "Wait? Why are we seeing the Predator in thermal vision? Thermal vision is what we get when we see from the Predator's perspective." You know what? Don't let that ruin this toy for you. Maybe the Predator is hanging out with other Predators. Maybe the Predator is standing in a mirror. Maybe he's taking a selfie. Does a sherbert colored Predator have to be justified in order for it to be awesome? Read more about this figure after the break... 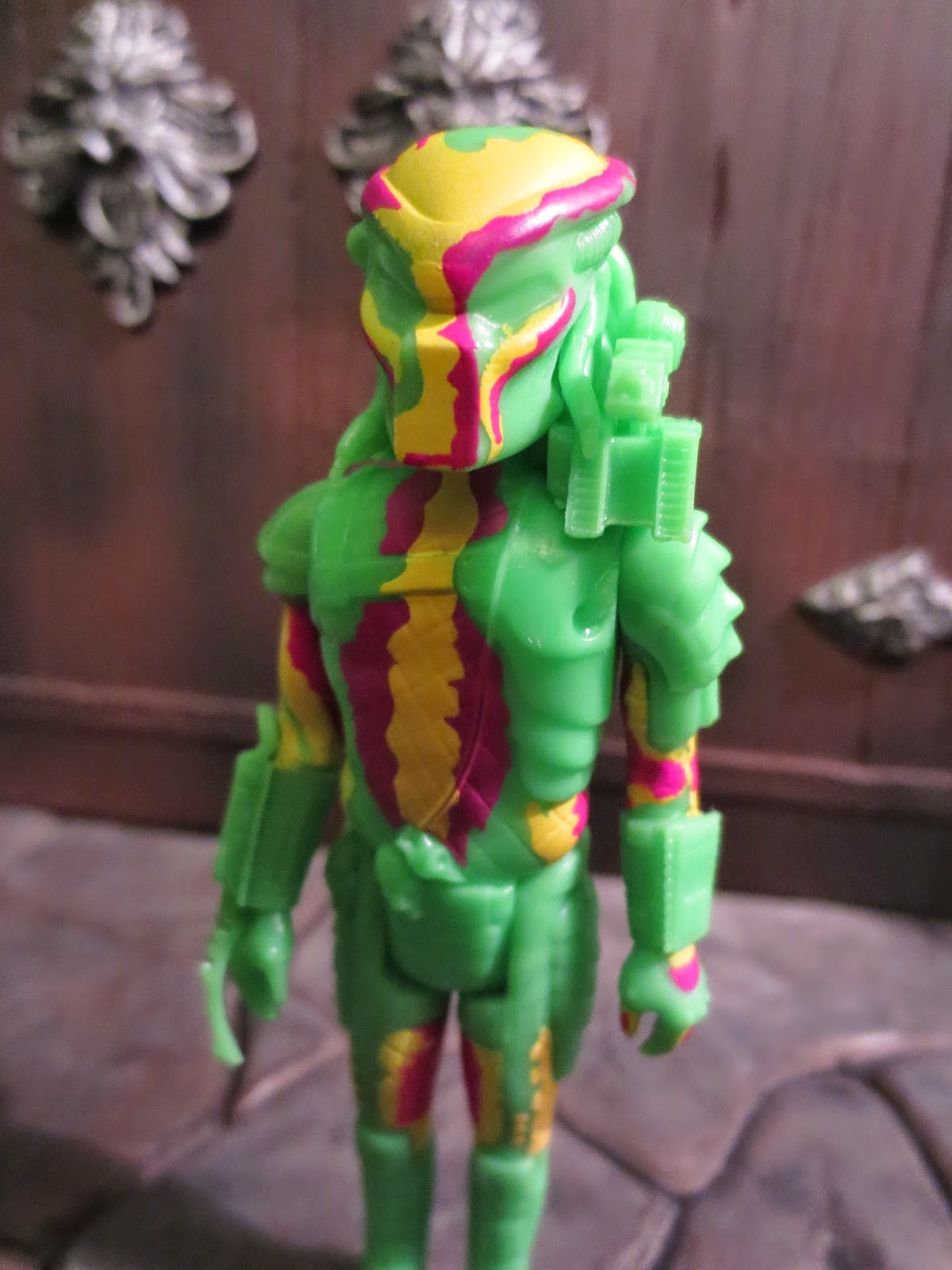 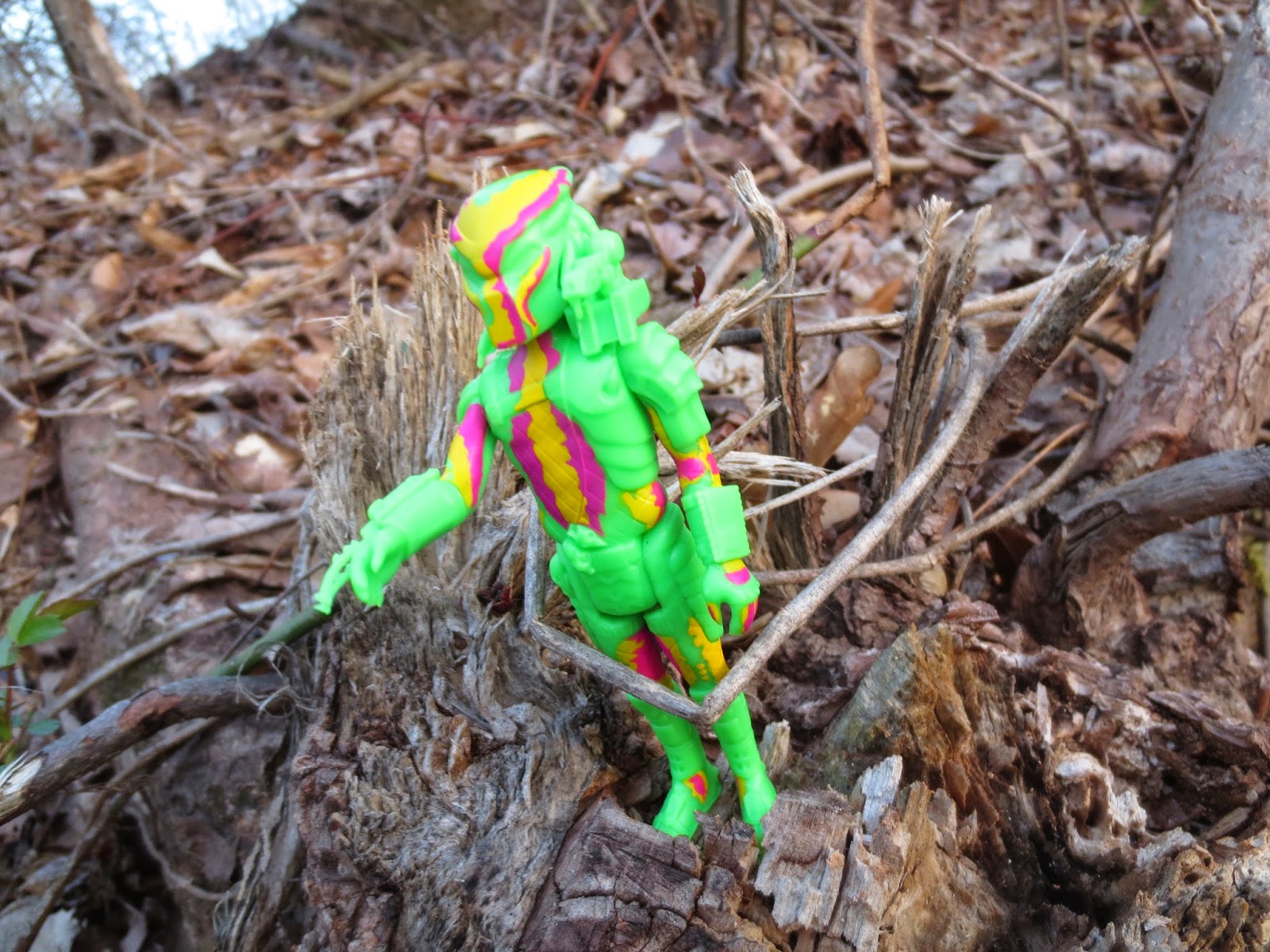 *Obviously the color scheme is the real draw for this figure. To simulate the Predator's infrared vision this figure is molded in a delicious looking lime green plastic and painted with yellow and magenta paint. It's a neat effect and looks really cool on a small faux-retro action figure like this. Whether you take this guy out of the package and play with him in the woods or leave him mint on his blister card, you'll appreciate his eye-catching appeal. 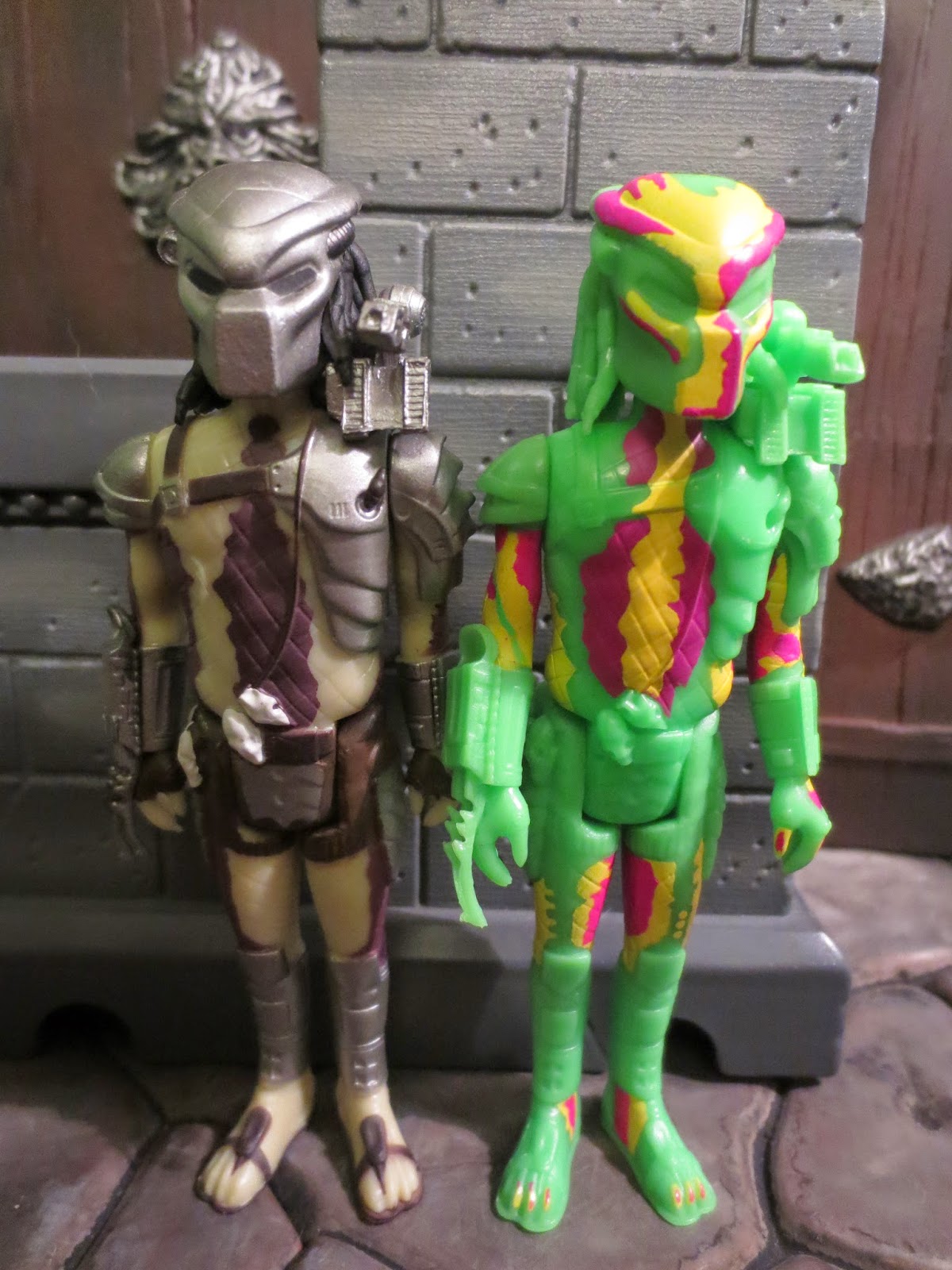 *This figure shares a body sculpt with the rest of Funko's Predator variants and a headsculpt with the masked variant. But guess what? This is still a really admirable Predator sculpt. Despite the fact that the individual details aren't painted they're still visible. Little extras like the skulls on his bandolier, the netting detail across his torso, and the various bits and bobs of armor that he utilizes to hunt his pray are very crisp. Funko did a nice job balancing the retro look of the figure with film accuracy. 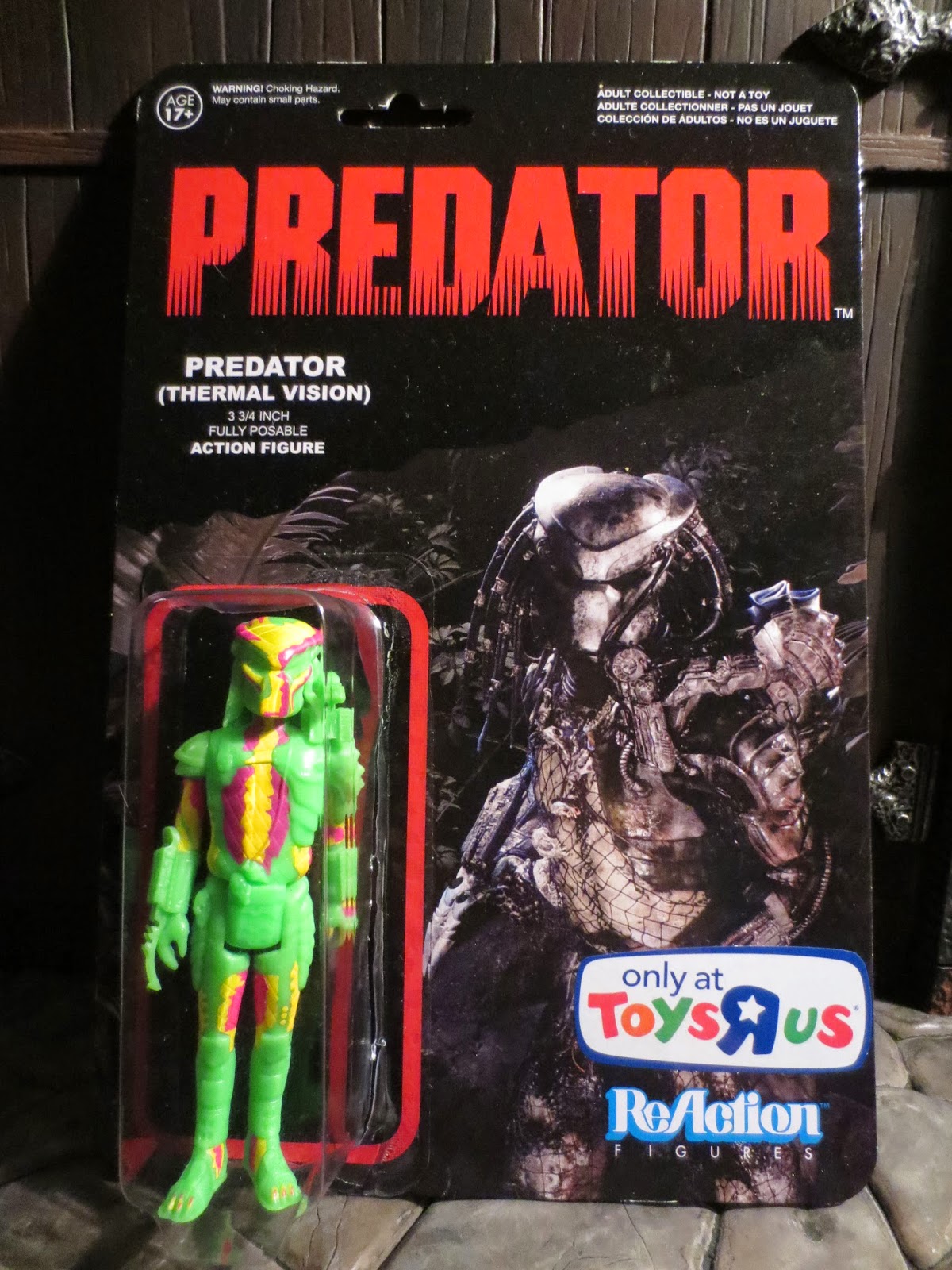 *Like the recent Big Trouble in Little China figures, the Predator just feels like he's molded in a higher quality of plastic than some of the figures released last year. The articulation is much crisper, too, with little chance of breakage. Great quality control on this guy! 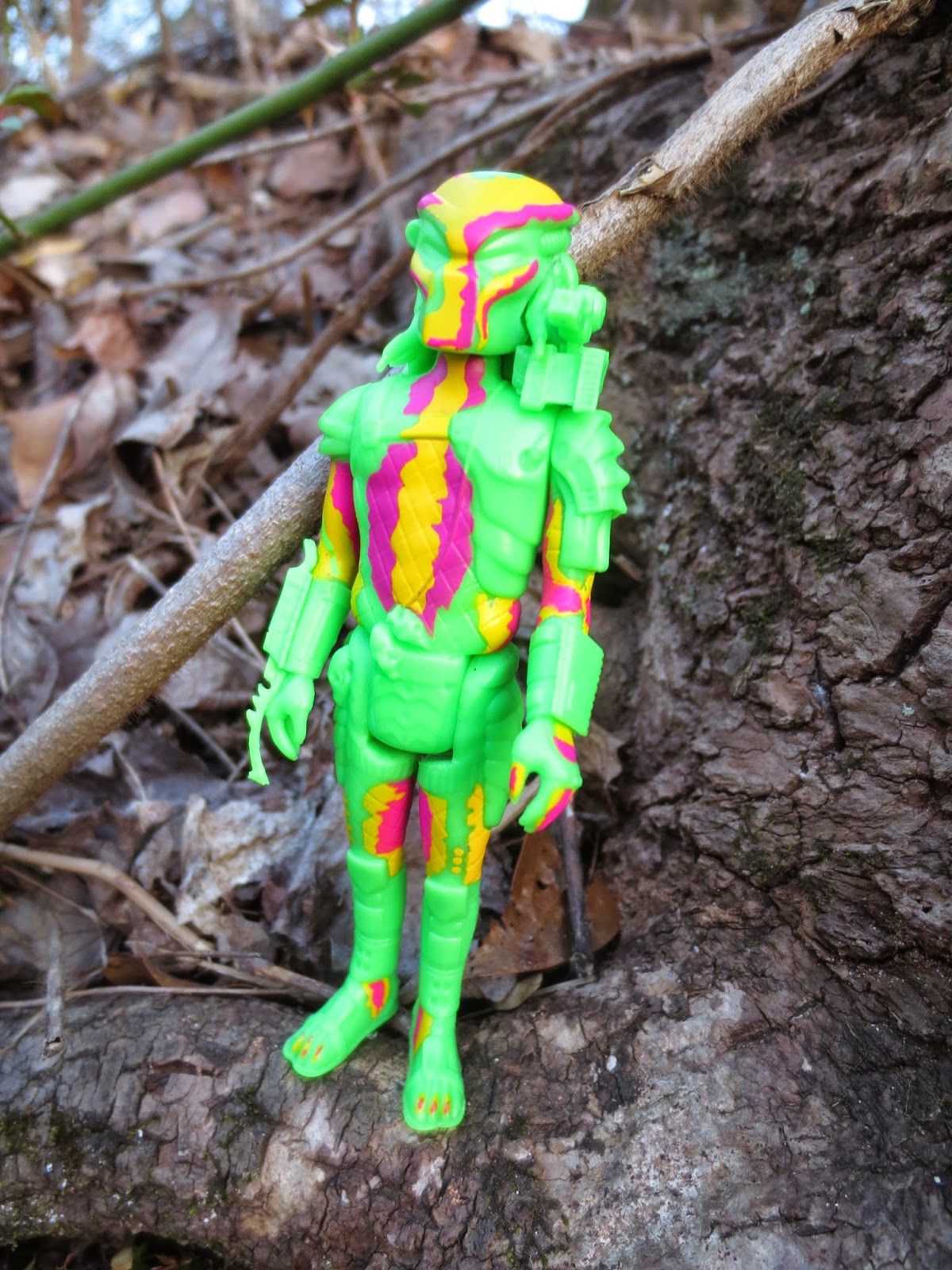 *The only negative I have with this is that the Predator can't turn his head. It's due to the awesome shoulder cannon mounted on his left shoulder, but still... I want my Predator to be able to look around. Making the cannon removable would have been a nice touch. 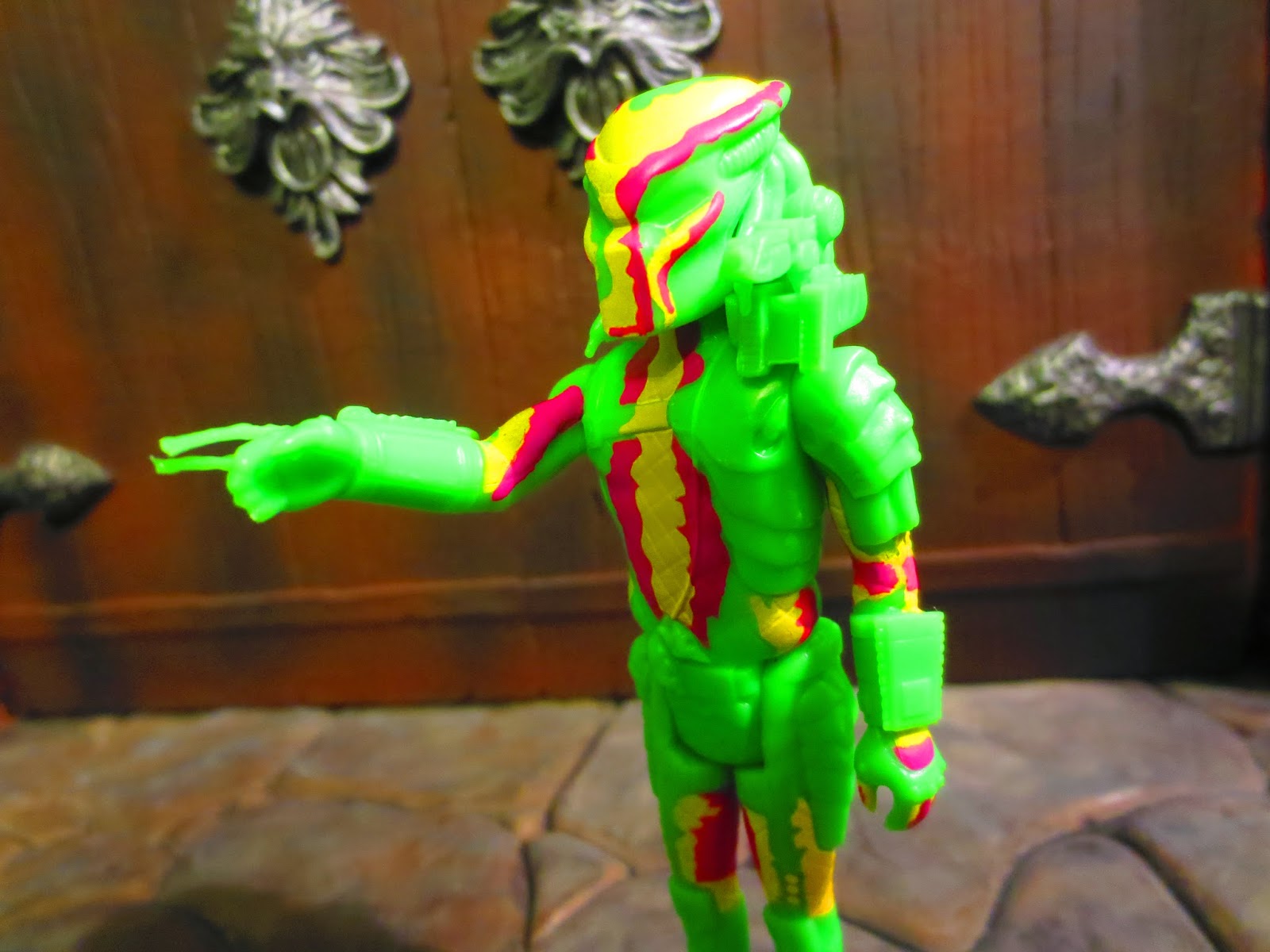 Thermal Vision Predator is fun, a bit silly, and totally unnecessary; thus, it's a great variant and a great retailer exclusive. While it's not a very complex figure it is a toy that absolutely jumps off the shelf at you. Not literally, but in a metaphorical way due to how eyecatching the colors are. The classic looking ReAction blister card just meshes so well with those bright colors and anyone who has ever even heard of the Predator is just powerless to resist the coolness of this figure. It's a fun, wacky variant that is just interesting. I'm giving this Predator a Great rating. He's fun, colorful, and he..predates your other ReAction figures. And yes, predates is an actual word that fits in this context. I looked it up.