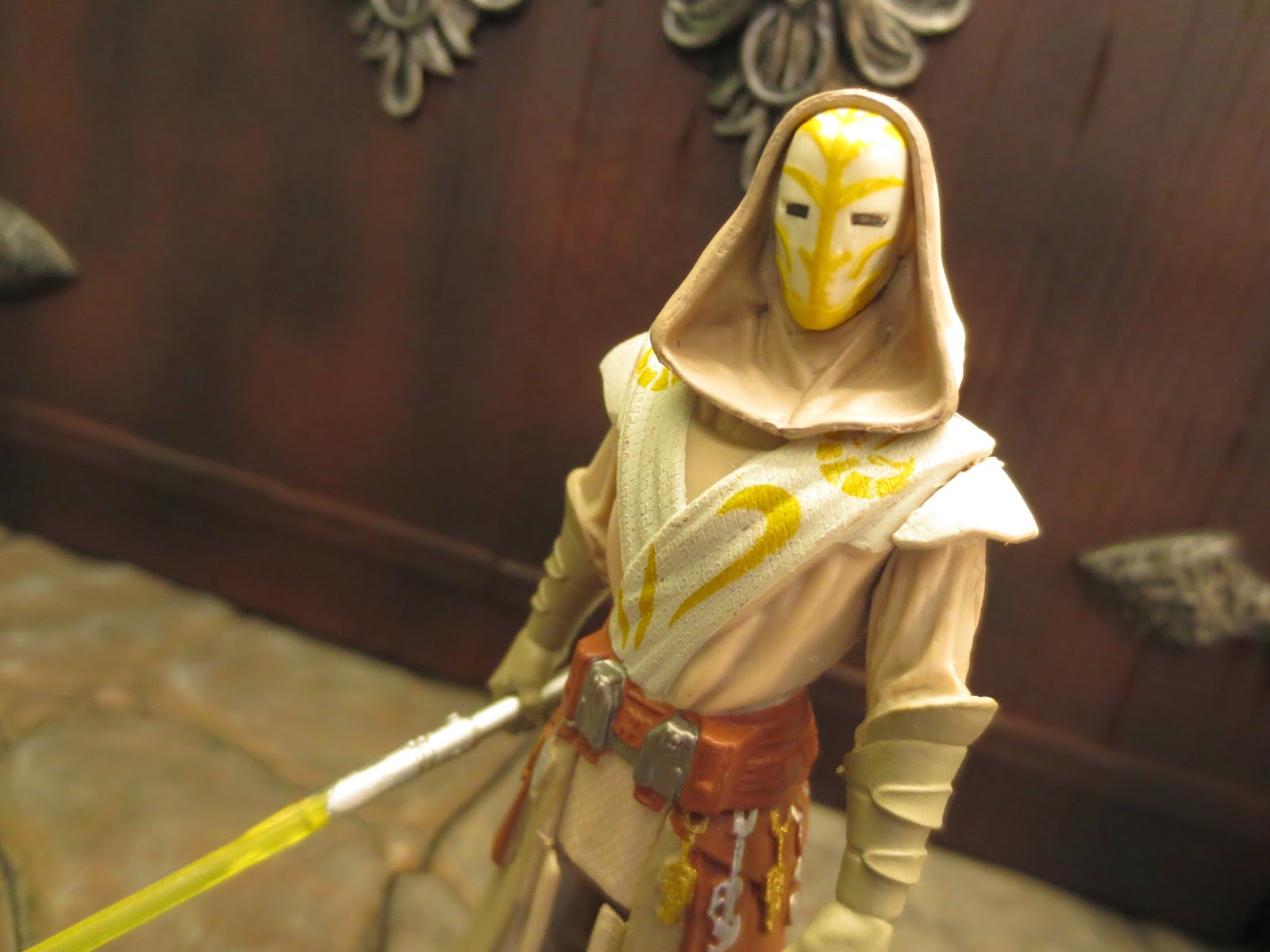 First things first: This figure is not from Star Wars: Rebels. He's from The Clone Wars. It even says so on his packaging, which is almost the same as the packaging for the Rebels characters other than the fact that the Rebels figures have the Rebels logo on the front. Basically, Hasbro is mixing together figures from both Star Wars TV shows and the six films in the newest incarnation of the Star Wars: Saga Legends collection which most fans are just referring to Star Wars: Rebels. Secondly, the Jedi Temple Guard is a very cool character. We saw these guys hanging around in two episodes of the fifth season of The Clone Wars and one episode from the sixth season, and it seems like a lot of fans have been anxious to get them in toy form. Of course, it's a bit disappointing that these guys ended up in the minimally articulated Saga Legends line rather than in the more articulated 1/18th scale Black Series assortment. Who knows if we'll ever see these guys redone as better figures? I'm finally going to try and stop complaining about the Saga Legends limitations and just look at this figure as it is. Ready for a look at one of the guys who guards the Jedi? Then join me after the break... 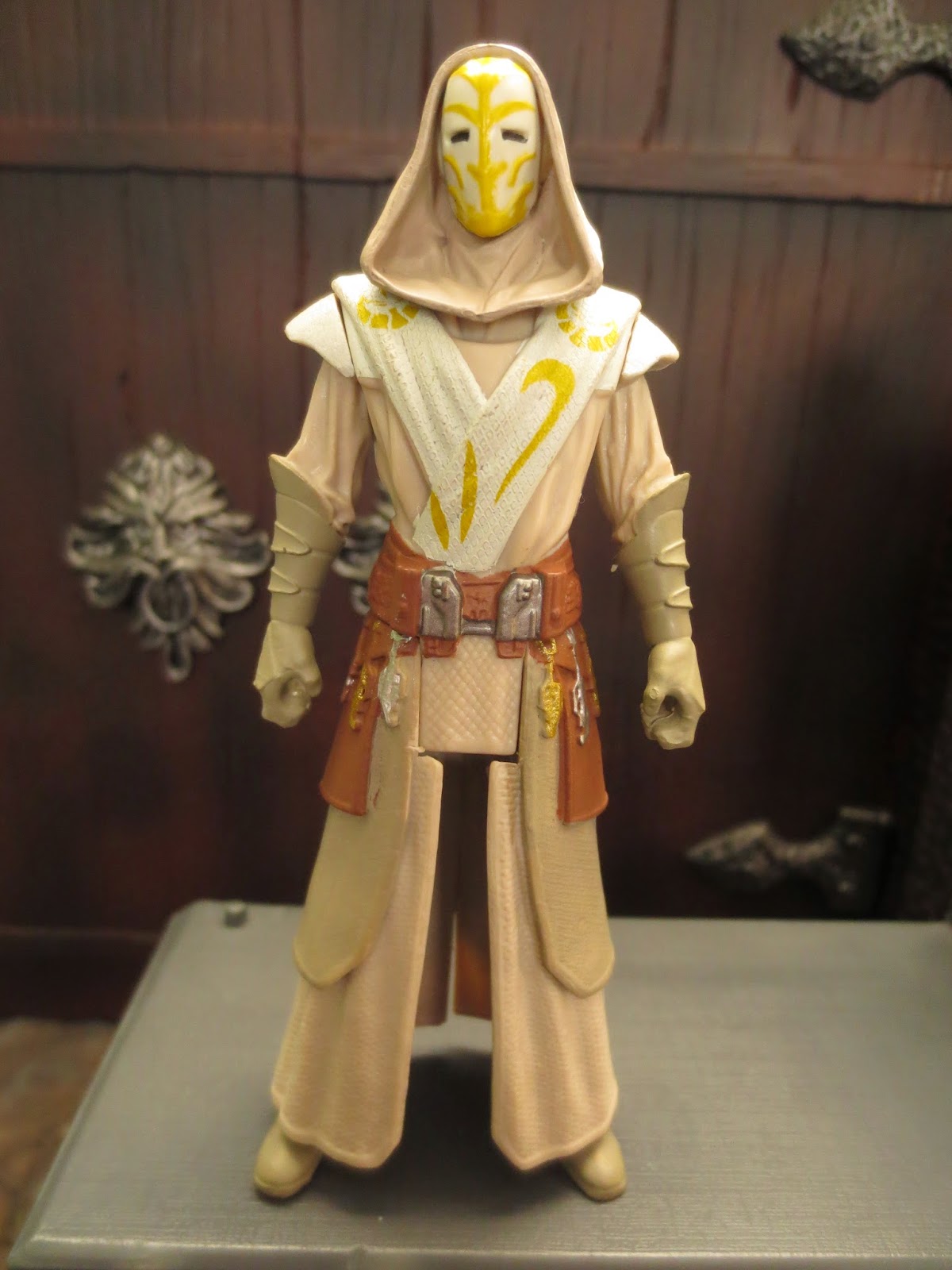 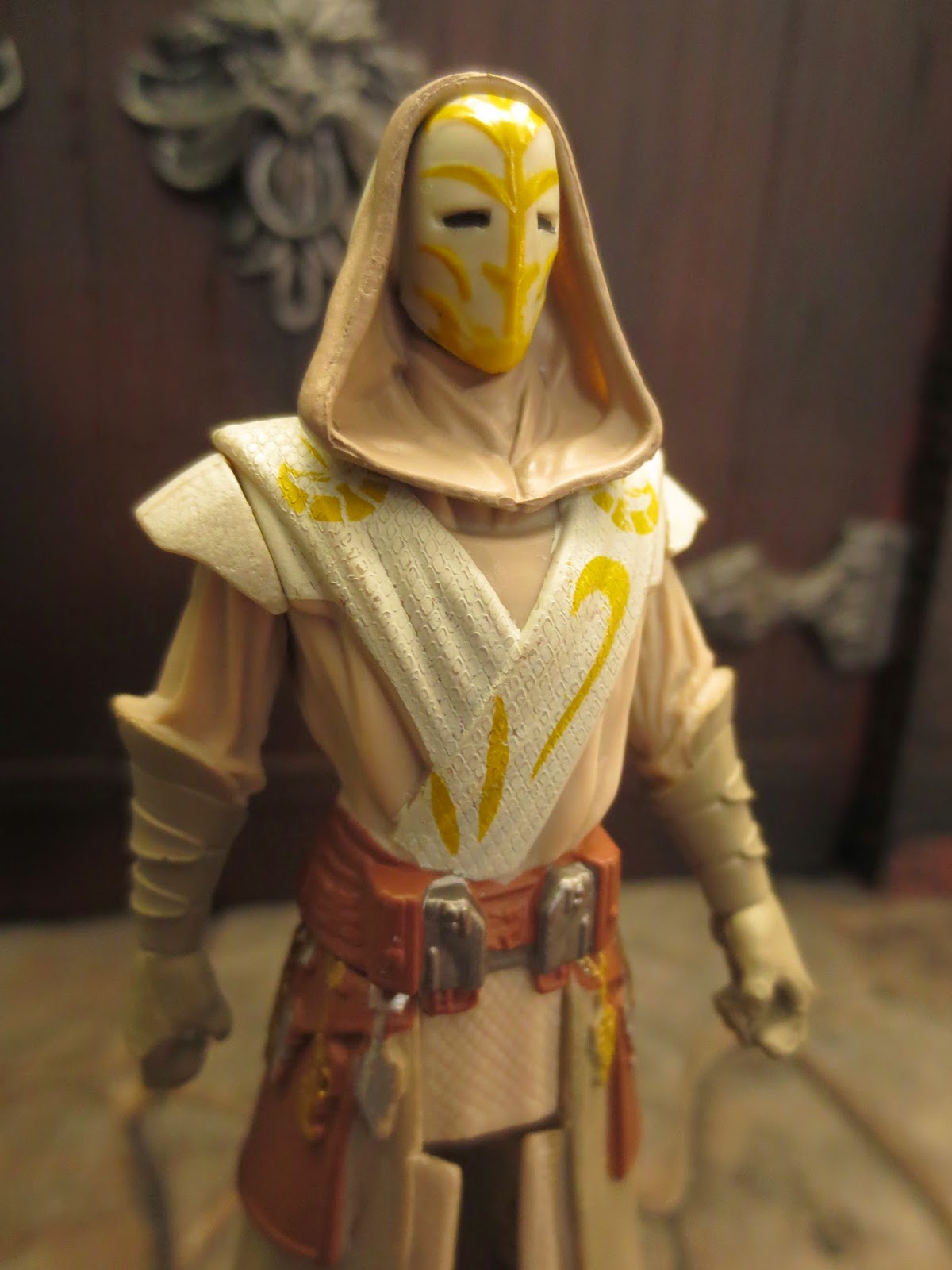 *Right off the bat, it's pretty clear that this is a nice sculpt. I really like the design of the Jedi Temple Guards and Hasbro really nailed their appearance perfectly. There's some exceptional detail work on the outfit: The hood is well sculpted, the differing materials of the robe have different textures, and there are lots of little tools or decorative doodads hanging from the belt. What are these? Keys to the different areas of the temple, perhaps? Anyways, the sculpt and costume design are phenomenal. I love the faceless, expressionless masks the guards wear. Very fitting for Jedi security.

*Another nice thing about the Jedi Temple Guard is that he can fit in with pretty much any Star Wars collection. While he's based on a Clone Wars character, his armored and masked appearance doesn't really convey the stylized look of the regular characters in the series. He could just as easily stand with your Expanded Universe figures or your Vintage Collection figures if you wanted him to do so. 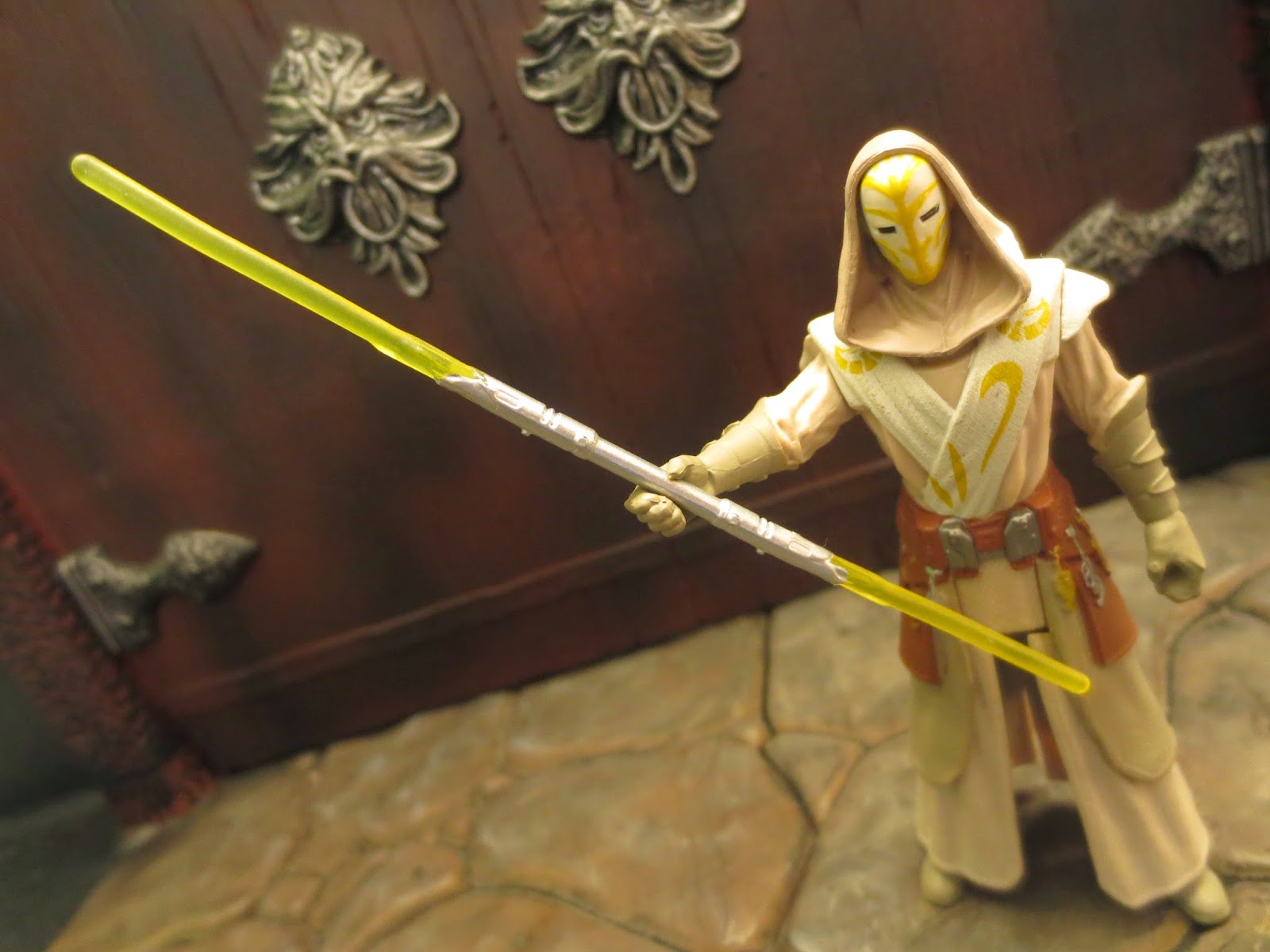 *While it might not be a huge benefit, I like the fact that the swivel joints for the Jedi Temple Guards' arms are positioned at an angle. Rather than swiveling vertically, the angled swivels now seem like they allow for a better lightsaber holding pose. The hands are also positioned in such a way as to accommodate his lightsaber pike, too.

*I'll be honest: I like the solid lightsabers much better than I like the ones that split apart. Those just seem (and were) too fragile! This lightsaber pike is unique in that it's the first canonical yellow lightsaber blade in Star Wars. It fits in either of the guard's hands well and looks rather nice. 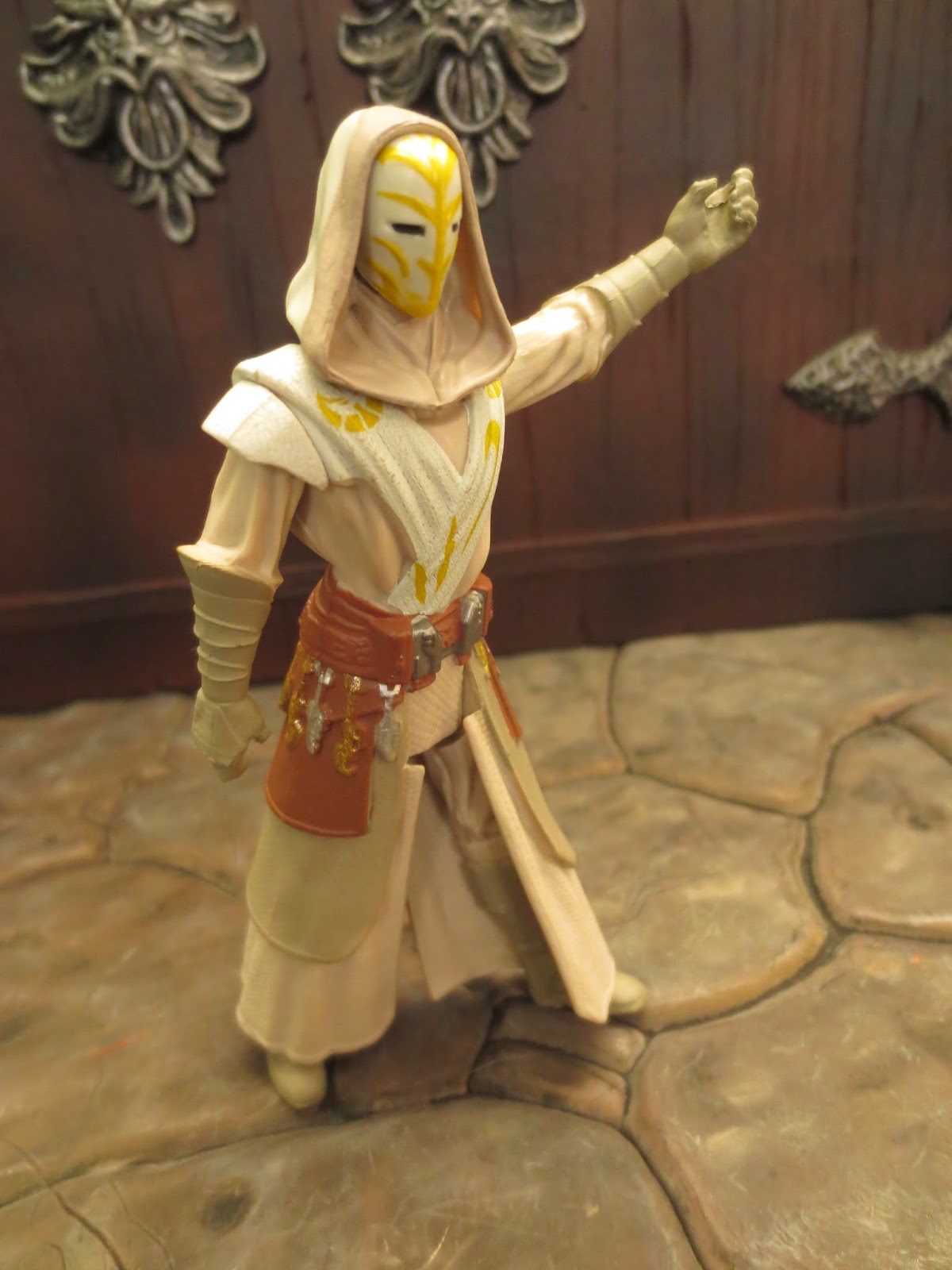 *I'm still trying to get over the fact that we went from the amazing Vintage Collection in 2012 to...these. Anyways, these have five points of articulation and that's how it is. Still, what's the deal with sculpting the robe onto the legs? Couldn't we have gotten the robe as a separate plastic piece that was permanently attached at the waist? I mean, that's something we saw back in the mid 90's with The Power of the Force 2. It just seems so much better than the awkward robe split. 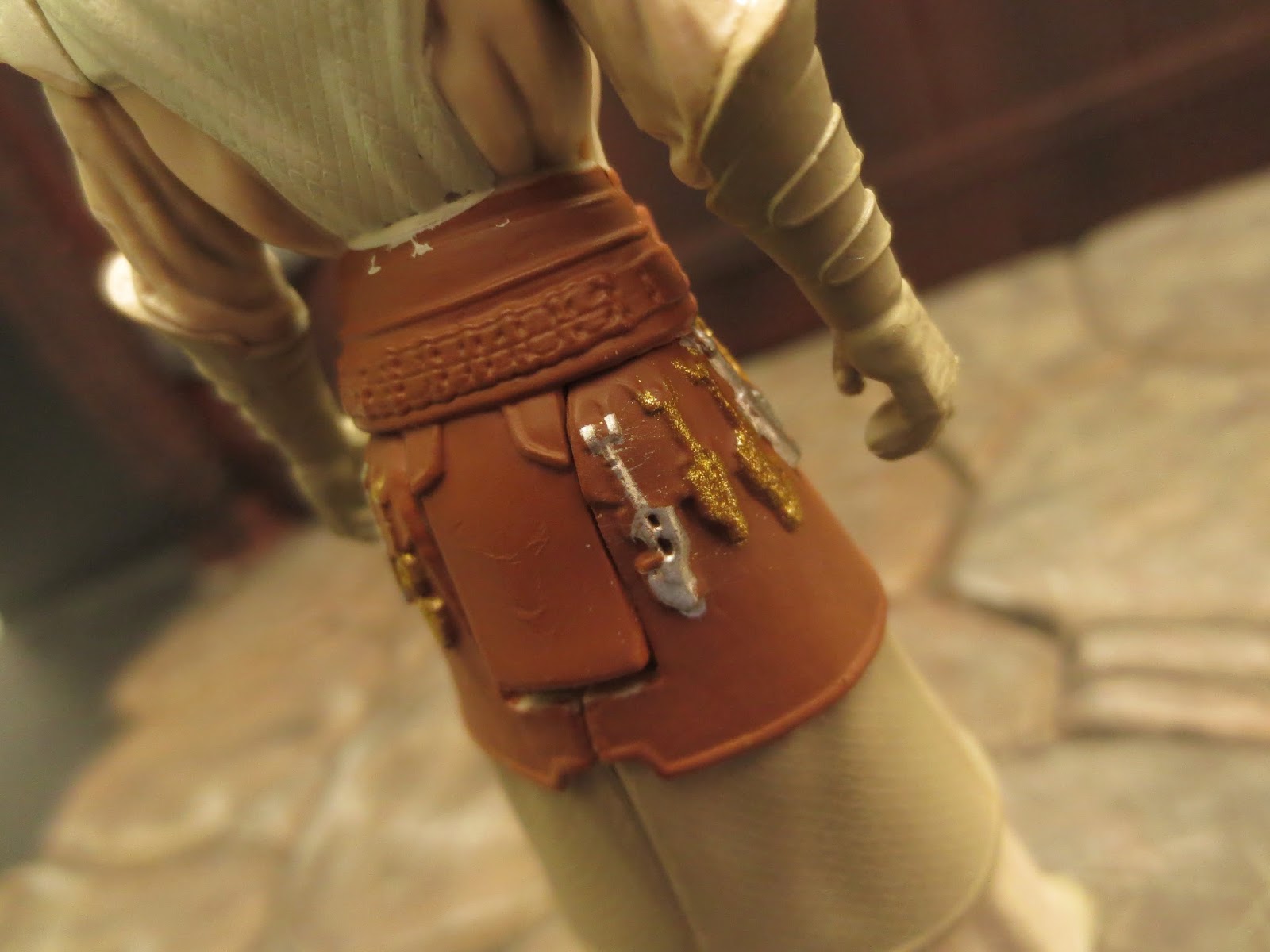 *Most of the paintwork on the Jedi Temple Guard is impressive but there are some really sloppy spots on the gadgets on his belt and on the separation between his belt and the robes on his upper torso. This seems like it could be a one-off thing, but mine has it. 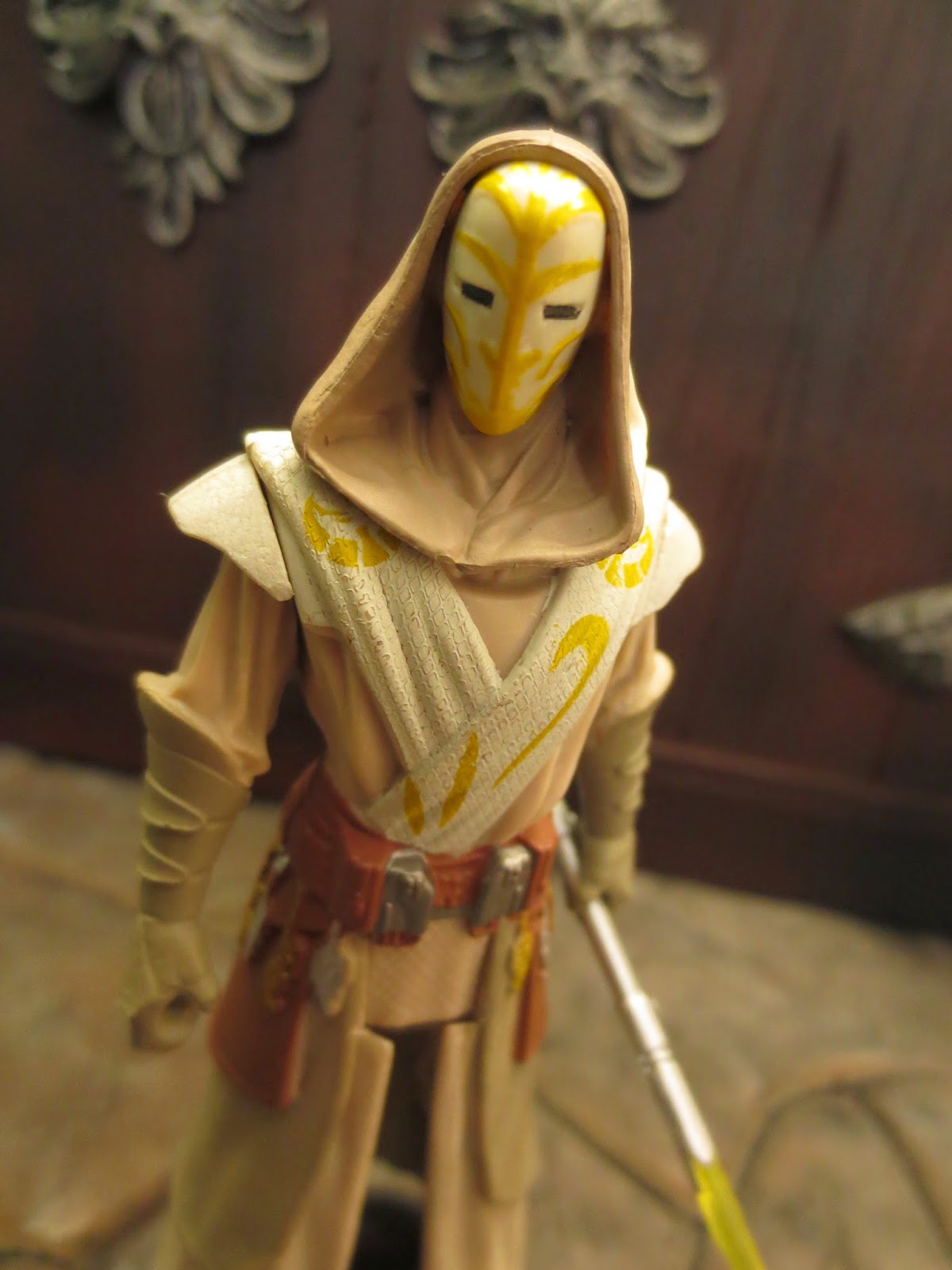 For not being a big fan of the direction Hasbro has taken with the Star Wars license over the past three years, I can't deny that the Jedi Temple Guard is a really nice figure. While I skip the majority of Hasbro's Star Wars releases these days, I made the effort to keep an eye out for this guy and I snapped him up as soon as I saw him. While his articulation will be disappointing to anyone who has owned a Star Wars figure between 1995 and 2012 (even the POTF2 figures had swivel waists), he's a nice looking "filler" figure. You could have these guys sitting in the background of a Jedi temple diorama and they'll still look great. Considering that he also cost me $6 (which is what Stars Wars figures cost before The Phantom Menace and all of that Commtech chip nonsense), I can't be too harsh. I'm giving this guy a Great rating. Of every 1/18th scale Star Wars figure Hasbro has releases in the past year or two, this guy might be the most exciting. If Hasbro can fix their distribution problems, maybe they'll be able to at least appeal to a few collectors who need some cool dudes hanging out in the background of the Jedi Temple.

I've reviewed a mixture of Star Wars figures on this site, including: