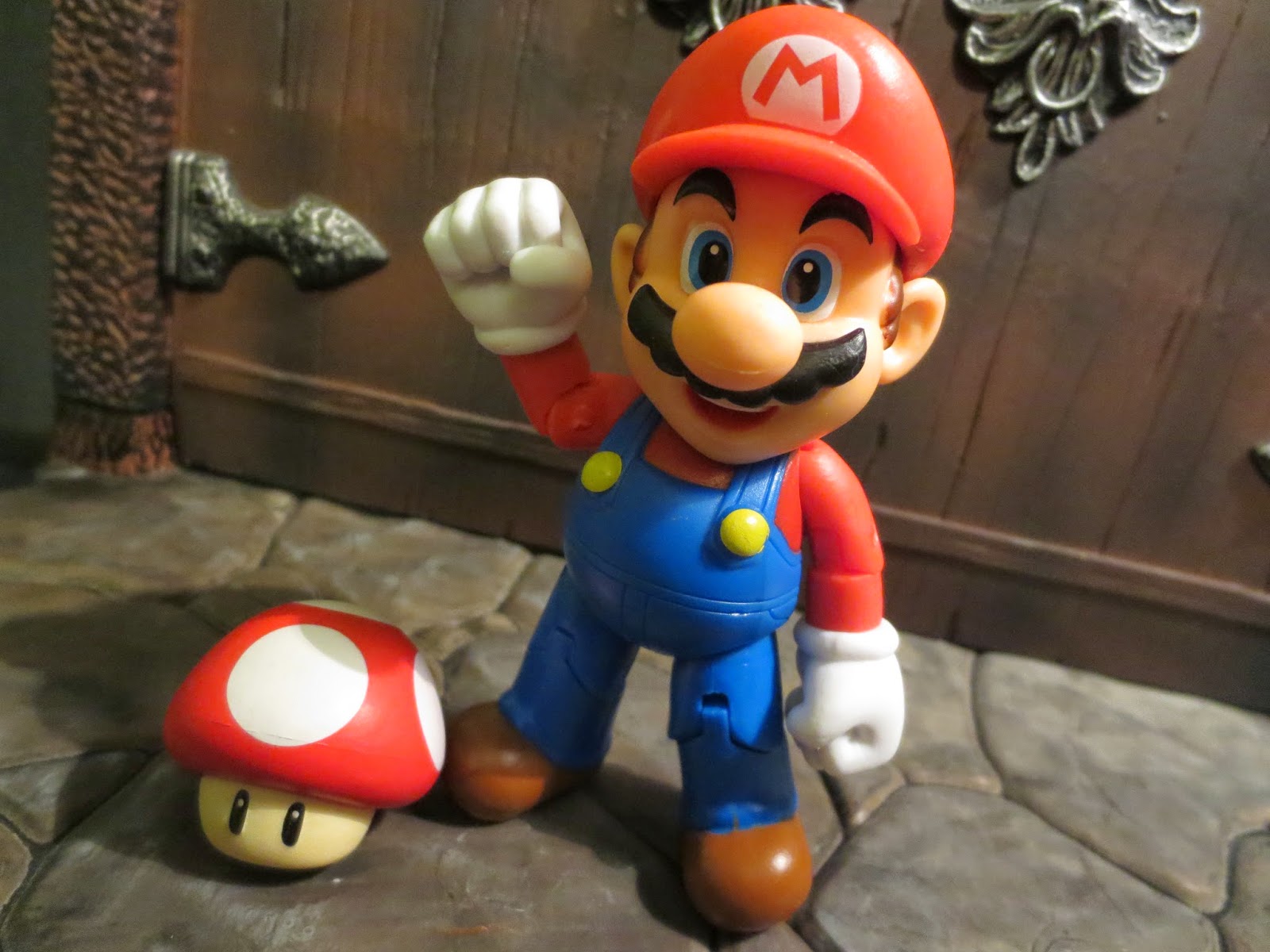 If you're interested in an action figure of Mario right now, you currently have a few options. S.H. Figuarts has releases this insanely cool Mario that's highly articulated, comes with a ton of accessories, and is compatible with lots of accessory packs. It retails for between $30 and $40 dollars but it's so cool that the good folks over at O.A.F.E. even gave it their coveted Toy of the Year award for 2014! There's also the Mario figure I'm looking at today from Jakks Pacific's World of Nintendo line. It only cost me around $7 or $8 bucks and it's part of a line that seems to have some potential for growth based on announcements for upcoming waves. Ready for a look at Mario? Then join me after the break... 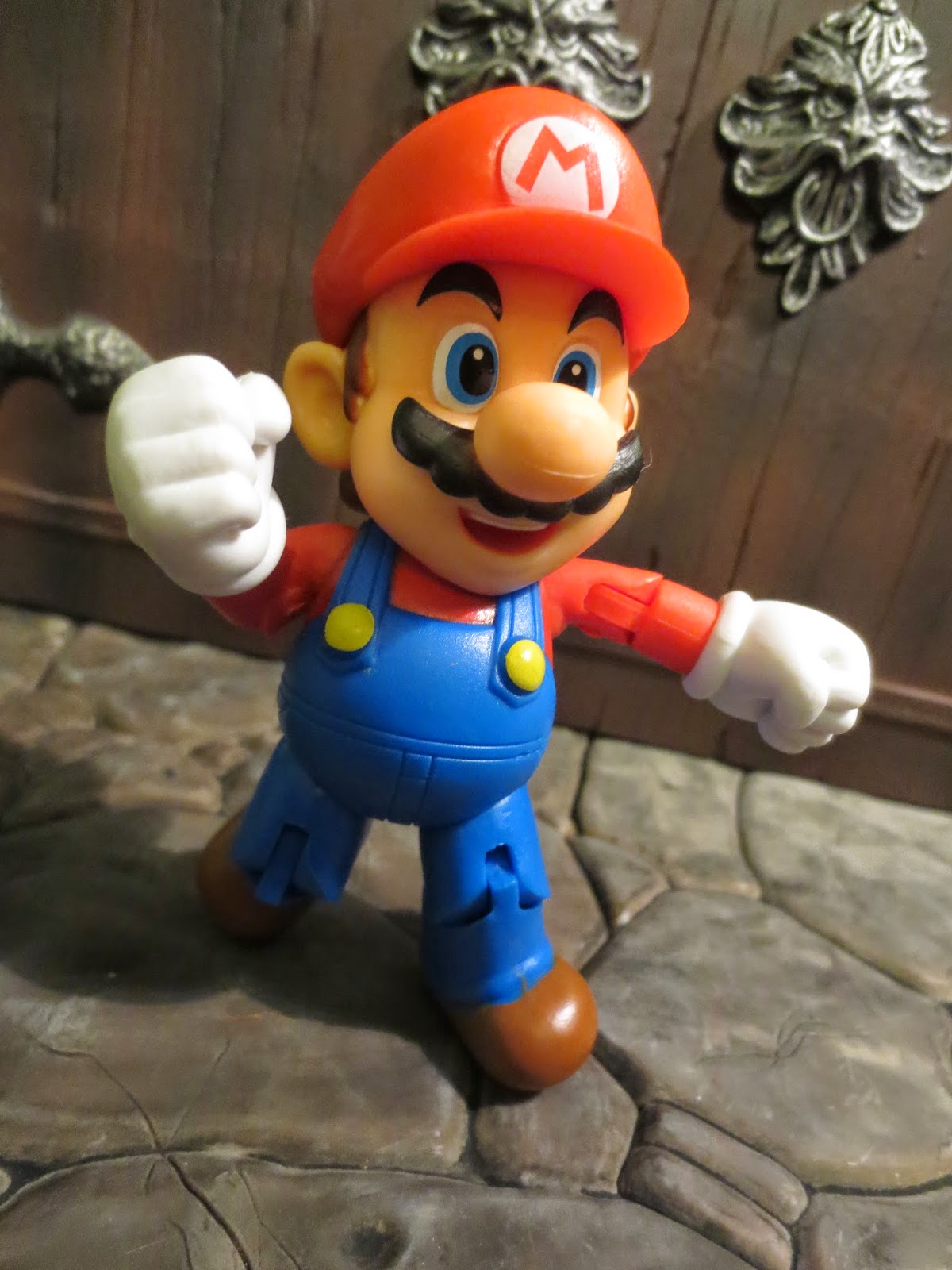 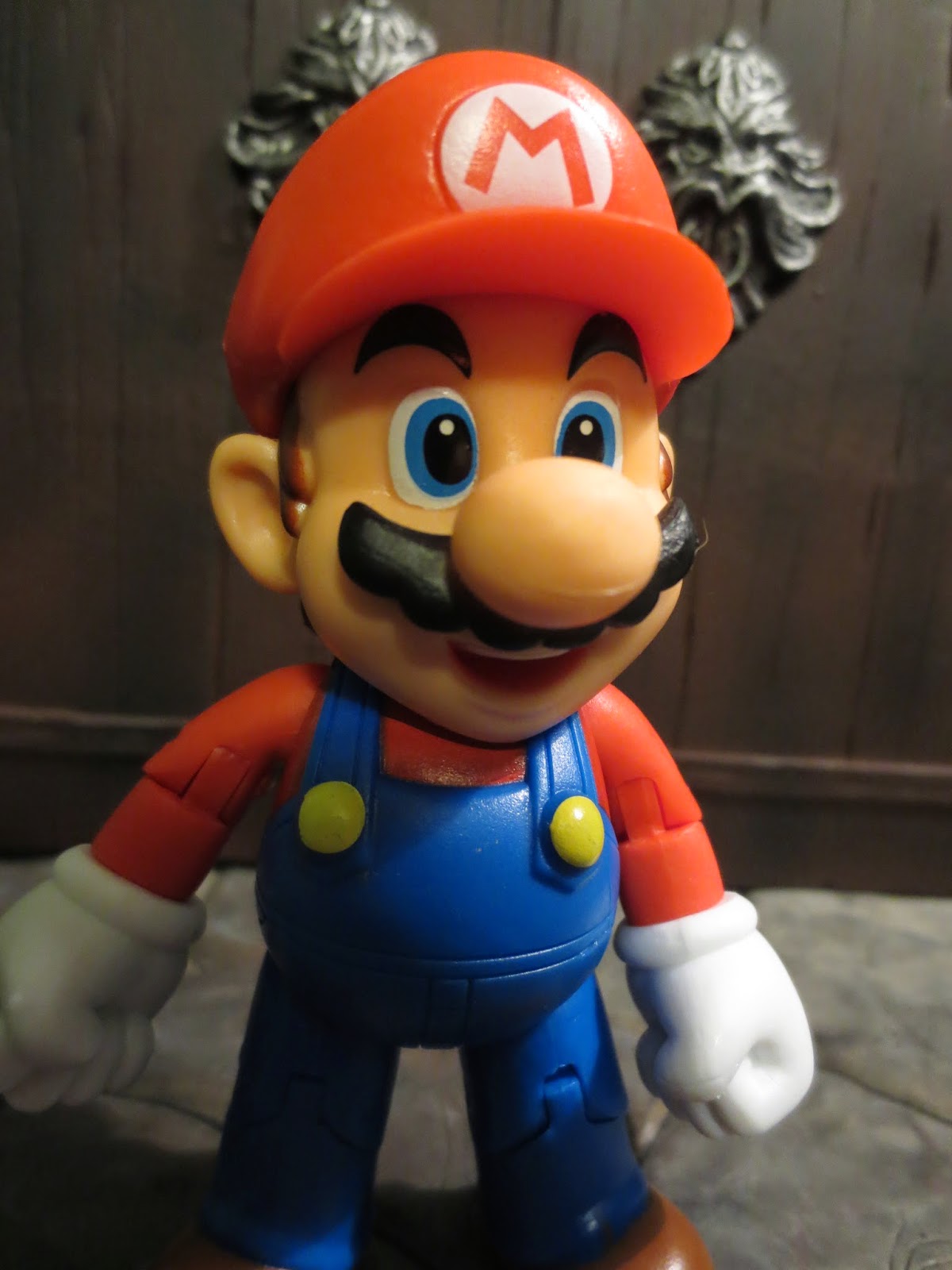 *I love Mario's sculpt. Seriously, this is a good Mario sculpt. Mario hasn't changed his signature look much in the past 20 years or so and this is just a dead on representation of one of the most iconic characters around. The exaggerated nose and mustache really make this guy look like he just popped out of a video game. There's even some finer details such as the stitching on his overalls  and some padding on his gloves. 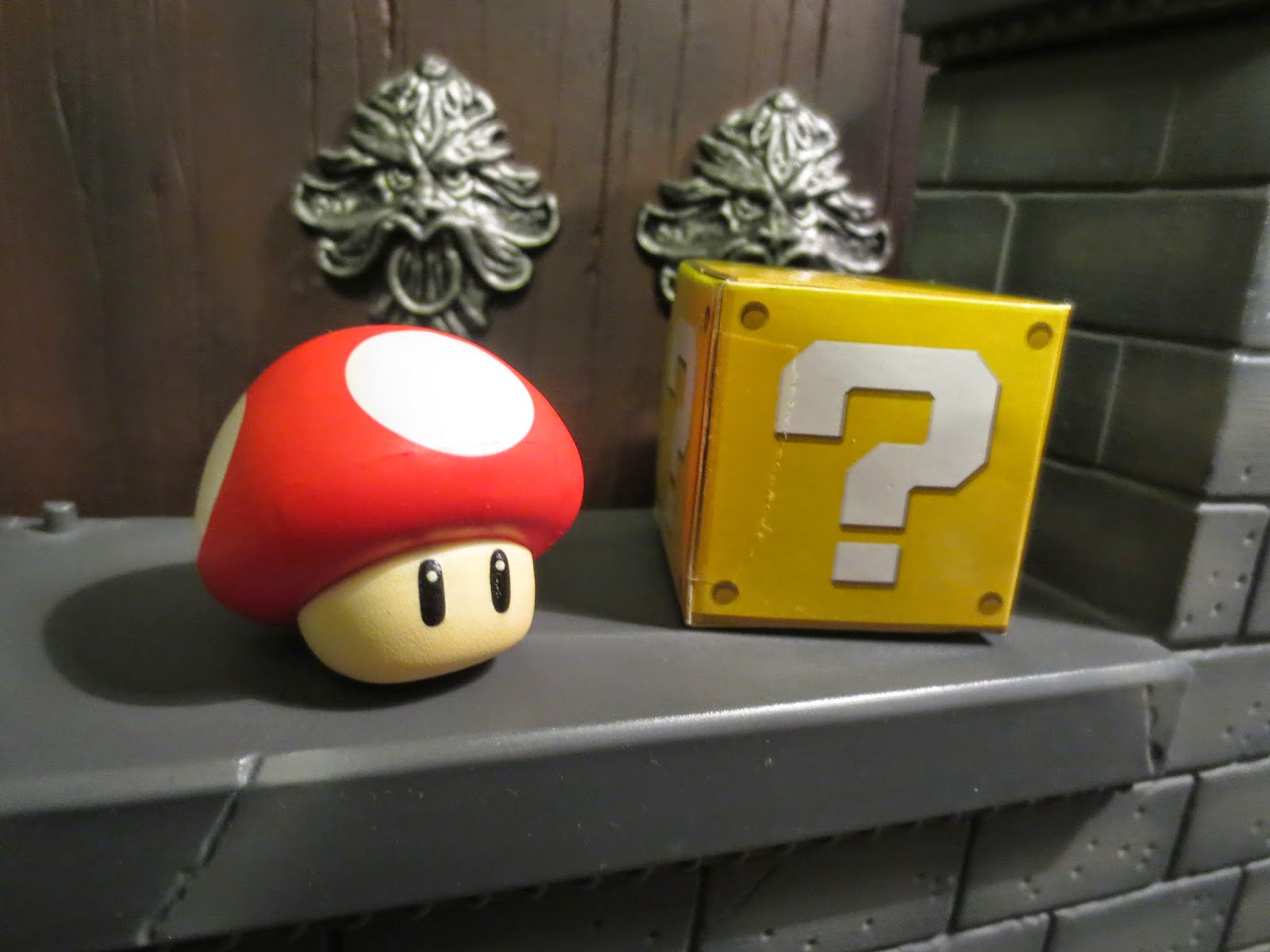 *Mario comes with a really cool accessory: A super mushroom. It stands on its own and comes packaged in a little cardboard box that's designed to look like a question block. It's labeled as a mystery accessory and so you don't know what you're getting until you buy the toy (or read this review). For a mass retail line, this kind of little surprise works well. 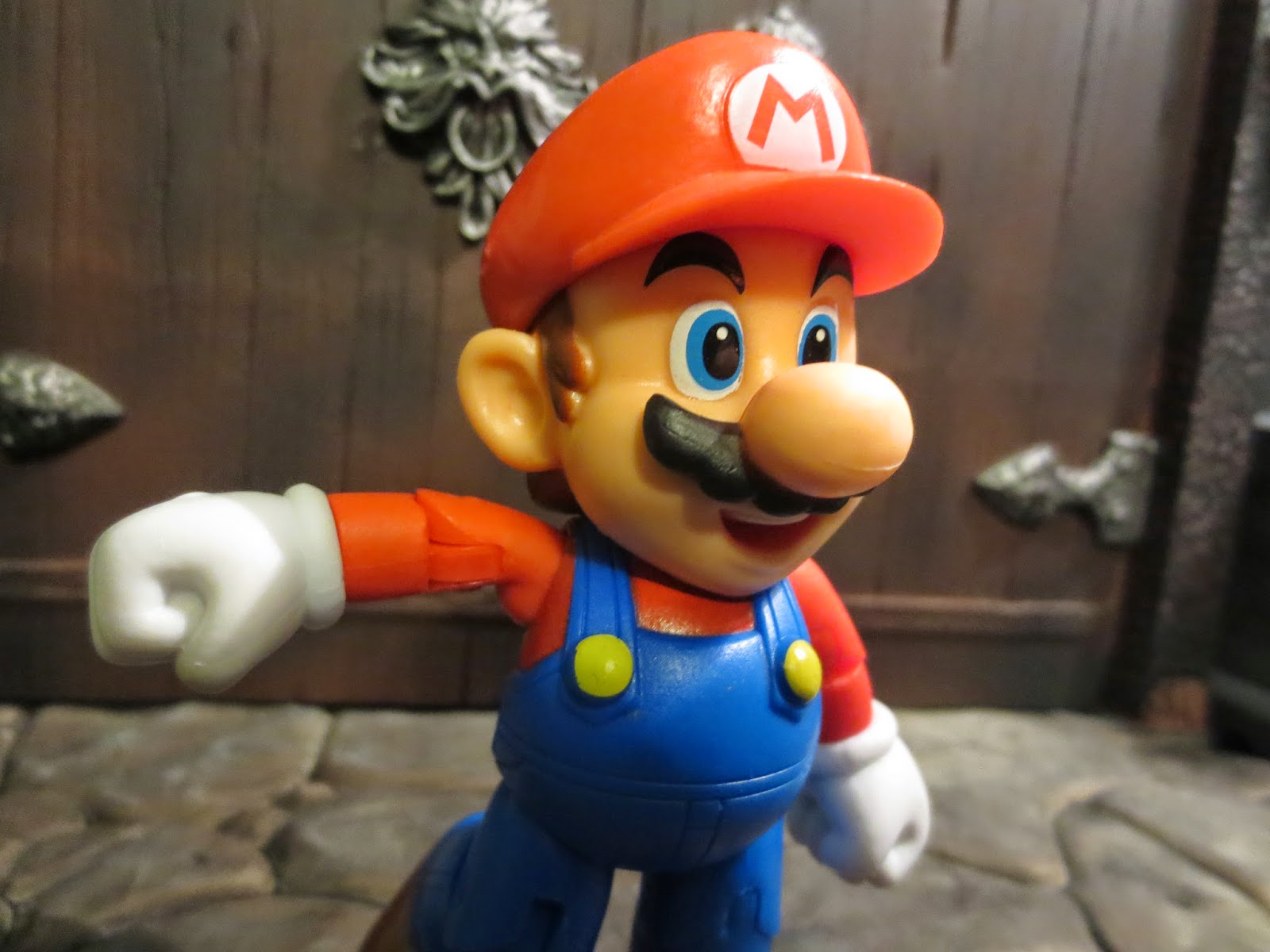 * Mario feels very solid. There aren't that many toys these days that I truly feel you could give a kid and not have to worry about breakage, but I think Mario could survive.

The Negatives:
*While his articulation certainly doesn't rival the SH Figuarts toy, it's not terrible. I don't like, however, that his head doesn't turn.

*If Mario has a true flaw, it's his paint work. The main details like the face and color choices look fine but the hair around his ears and hanging down over his neck, the buttons on his overalls, and the places where his blue overalls meet his shirt are rather messy. The buttons might be the worst (they look haphazardly applied without full coverage) but the hair looks odd in the back as well. 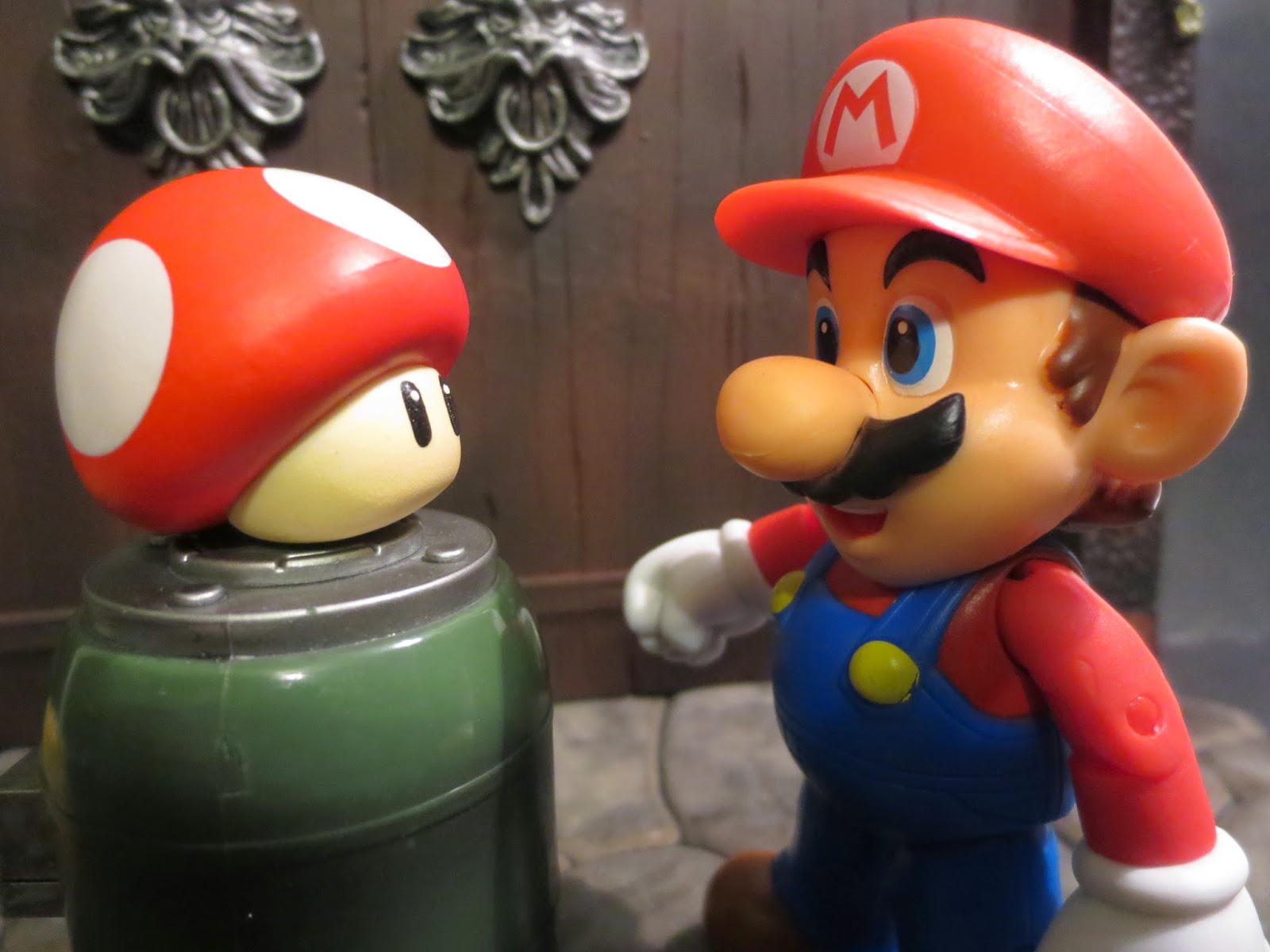 Mario's got some problems but, all in all, he's a decent figure. Considering that these guys are cheaper than almost any other figure on the market (they're less expensive than TMNT) and I think Mario's a steal. For a mass market retail toy, I'm rather happy with my purchase. I have the feeling that World of Nintendo could be a very cool line if Jakks continues to up the quality of their paint applications and improve on their character selection. The fun accessories are also a great bonus. I seriously want a POW block from Super Mario Bros. 2. And a radish with a face on it. Those things rock.