Action Figure Review: The High Priest from Legends of Cthulhu by Warpo 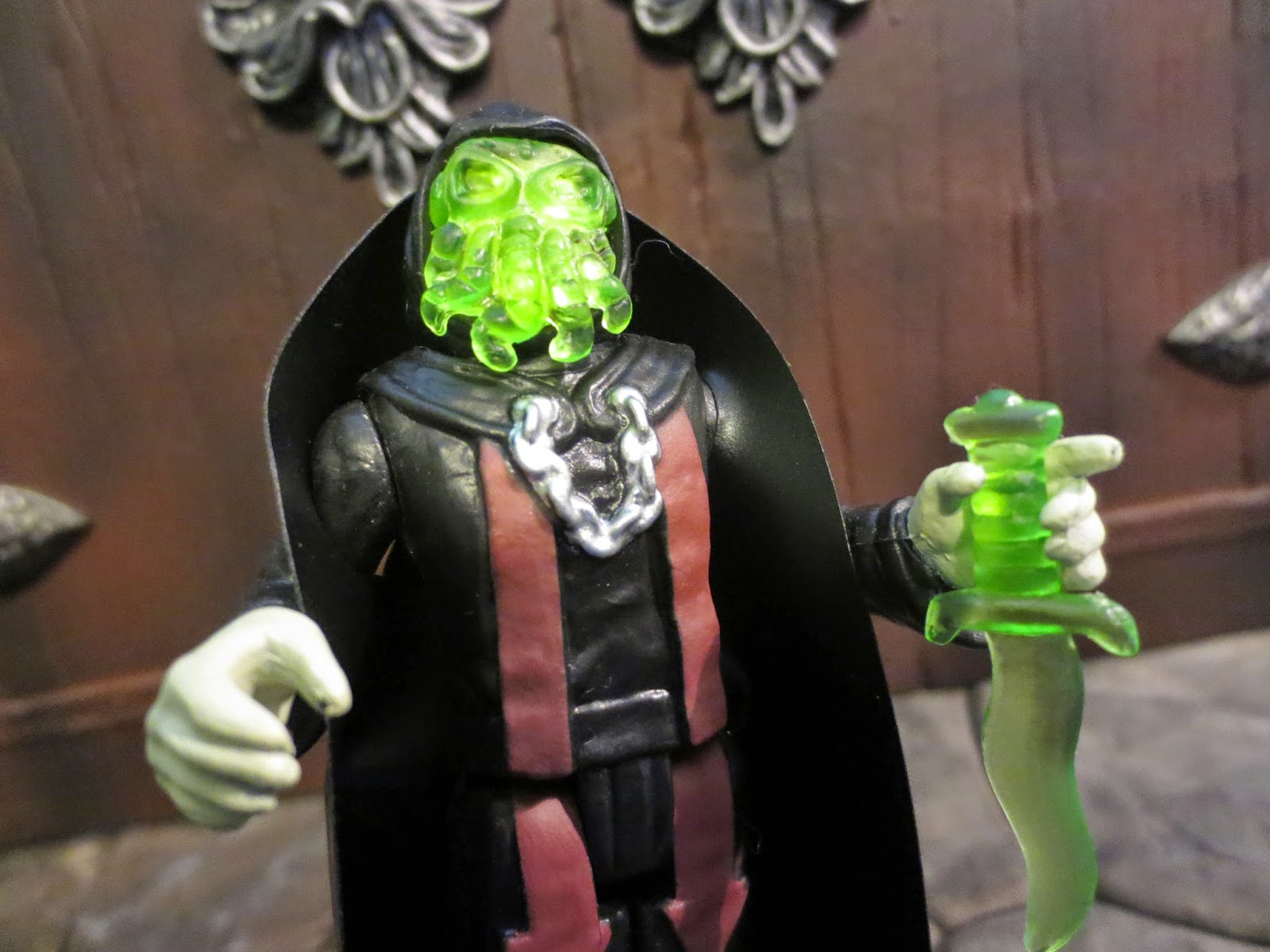 In June of last year over at ThEpic Review I interviewed Bryan Katzel of Warpo Toys about their Kickstarter funded retro-throwback line "Legends of Cthulhu" which I had already backed. A week or two ago I received my shipment of action figures from this H.P. Lovecraft inspired line and I'm pumped about showing these off! Imagining that Lovecraft's Cthulhu mythos served as an inspiration for a late 1970's/ early 1980's toyline, Warpo has brought us some of the coolest retro inspired action figures that we've seen yet. Today I'm looking at the High Priest, a Kickstarter exclusive variant of the Cultist. This is the guy who leads the chant "Ph'nglui mglw'nafh Cthulhu R'lyeh wgah'nagl fhtagn" in order to hasten the coming of Cthulhu and keep the other guys in line. Ready for a look at this guy? The join me after the break... 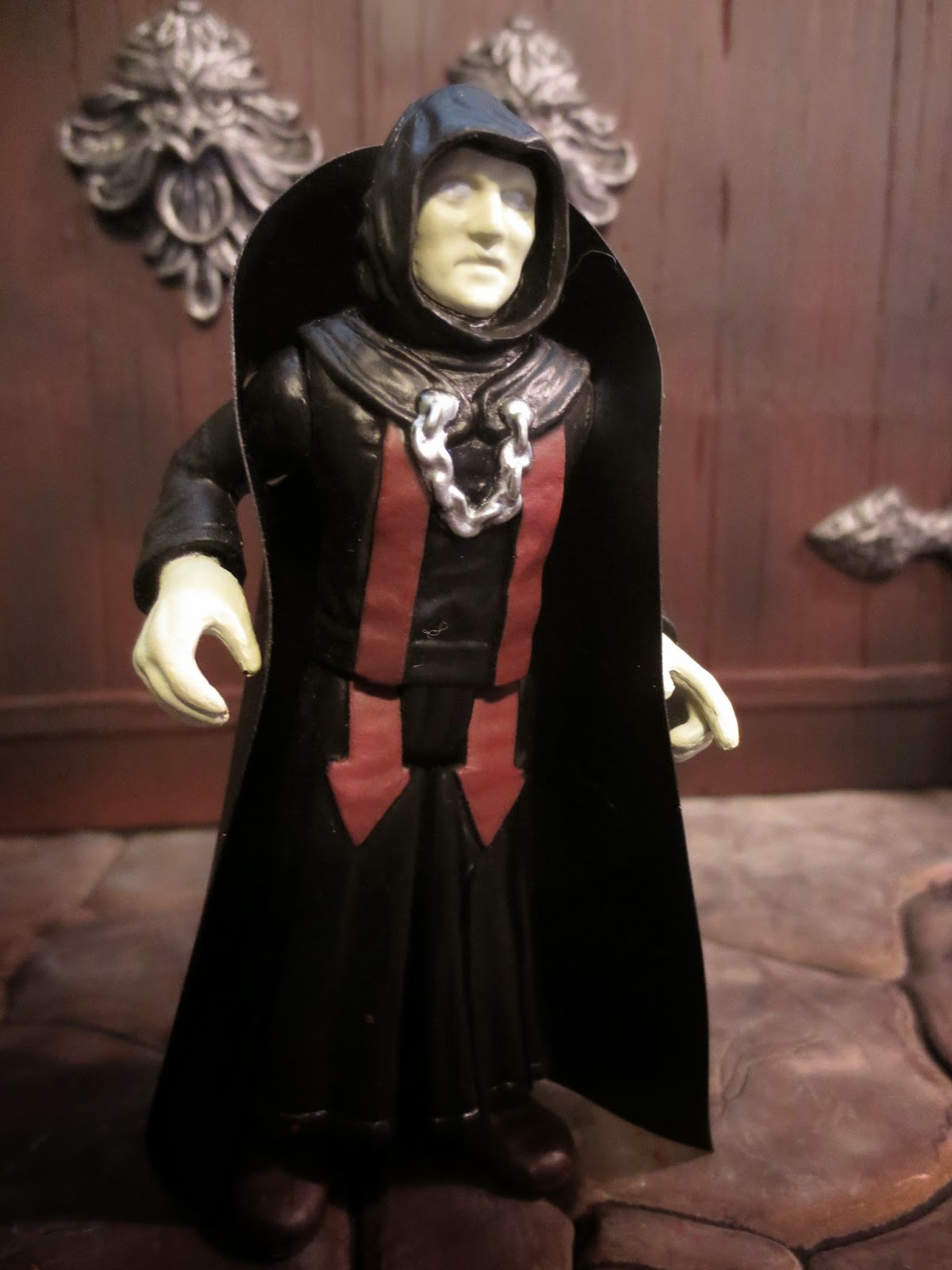 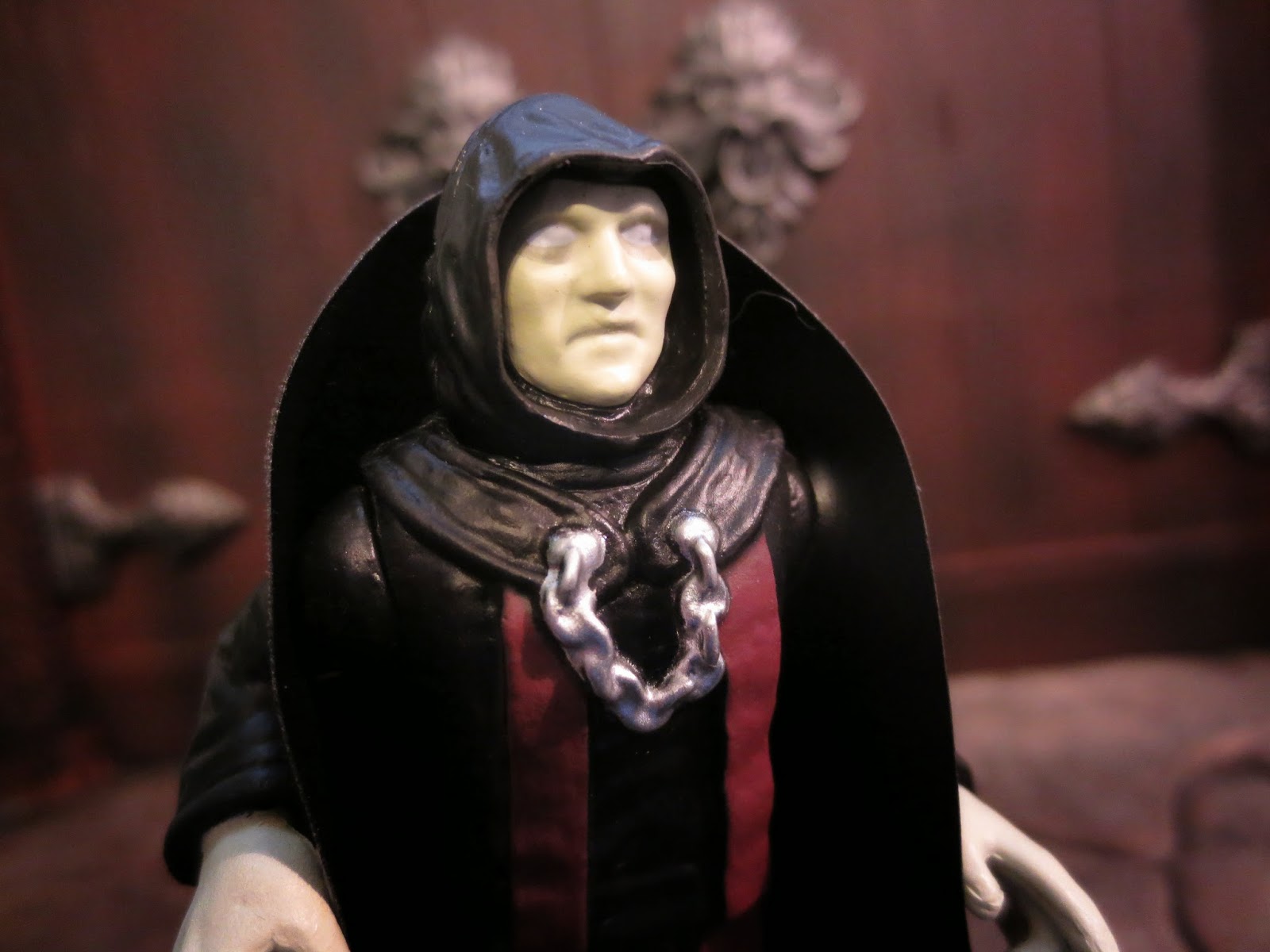 *While these figures are designed to look like 1/18th scale action figures from the late 1970s/ early 1980s, they're a bit different in style than Kenner's Star Wars or most of FunKo's ReAction line. The style reminds me more of Knickerbocker's Lord of the Rings line or Mattel's Clash of the Titans. I'm cool with that, though, as it works extraordinarily well with a fantasy based toyline. They're not as "flat" as some of the other retro lines and have some features such as bent elbows. A bit more dynamic and better for posing. Still, maybe it's the paint, but this guy really reminds me of Emperor Palpatine. 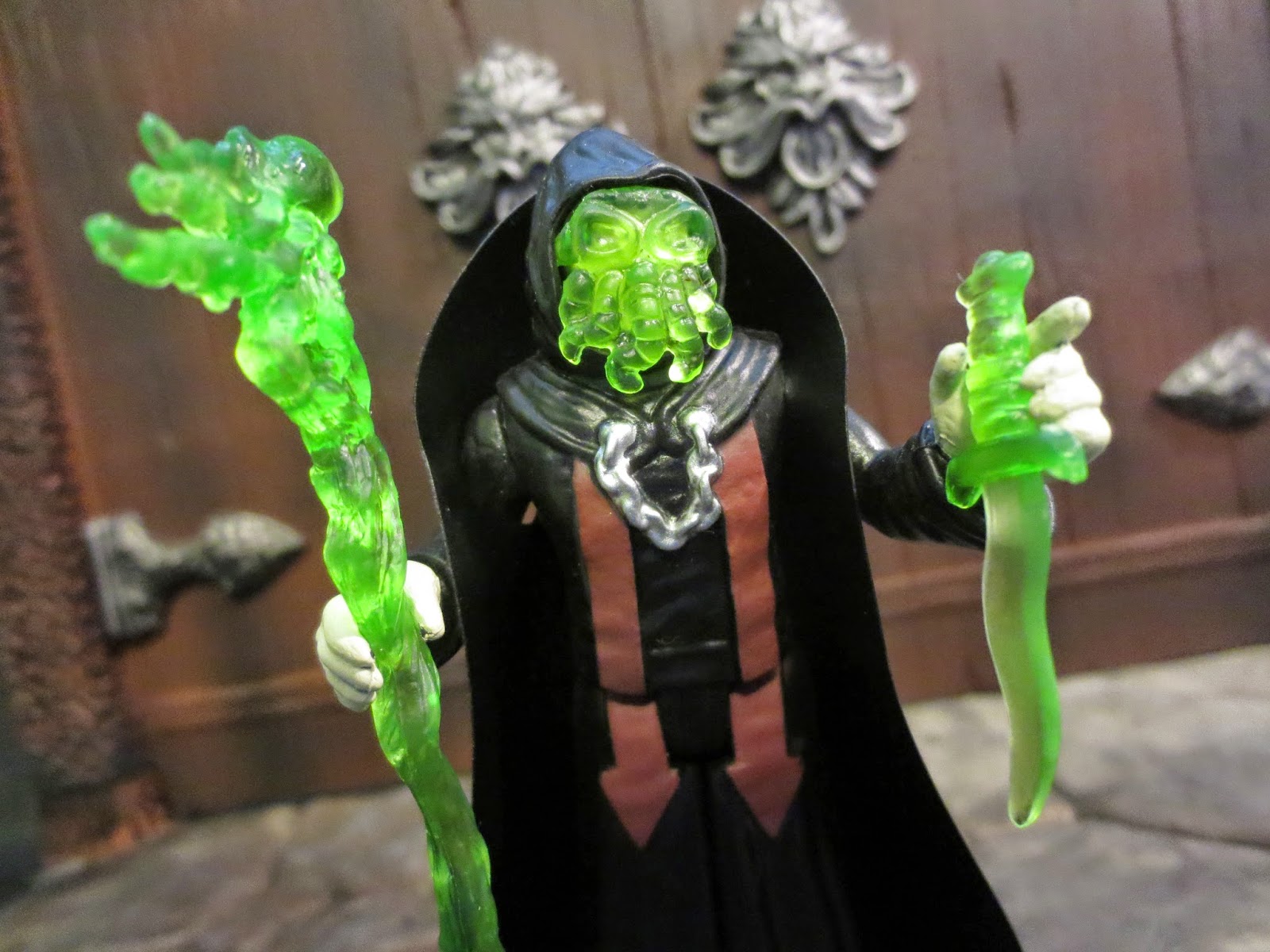 *The High Priest looks quite similar to the basic Cultists, but of course that's to be expected since he's a paint variant. He's very creepy with sunken, milky eyes and putrid skin. His black robes feature some nice detail such as a burgundy sash and a silver chain to keep them fastened. Of course, the High Priest also features a vinyl cape to seal the deal. It looks appropriately retro (very '78 Vaderish) and feels fairly sturdy. I'm not sure I'd remove it repeatedly but I can't see accidental tearing being an issue. 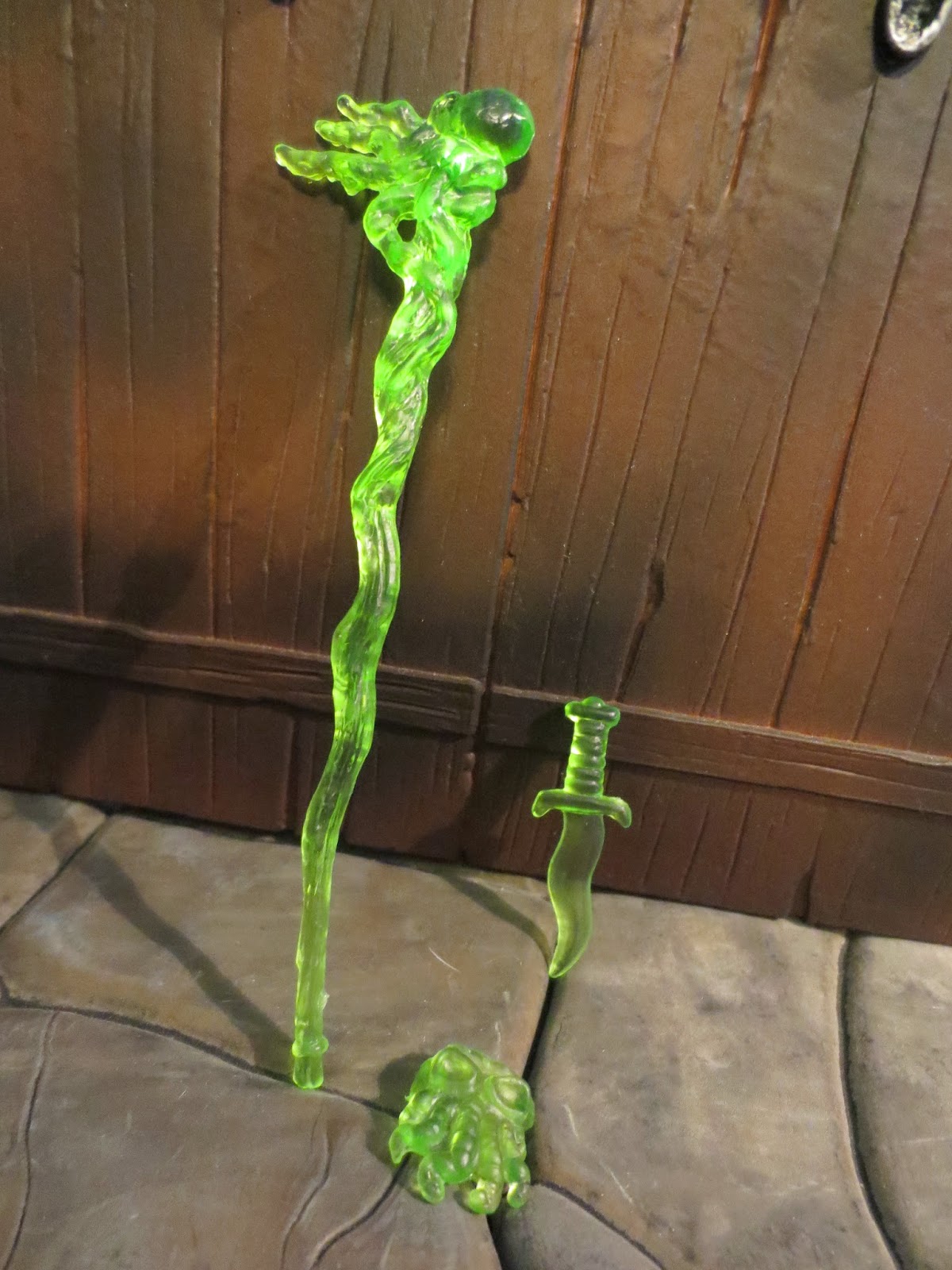 *The High Priest comes with the same accessories as the Cultist except that they're molded in a translucent green plastic. They're simple but they fit in his hands well and look really cool. The Cthulhu ceremonial mask fits snugly in the High Priest's hood and the staff and very cool dagger can fit in either hand. I love the translucent dagger the best as it looks like some sort of conjured or bound weapon. Very mysterious!

*I don't often mention packaging but I will here. It's GORGEOUS! The art on this line was done by Ken Kelly and it perfectly captures the weird adventuresome feel you would expect from a Lovecraft inspired toyline. Looking at this picture as a kid would have made me a sucker for these. It's just so epic, weird, and awesome! 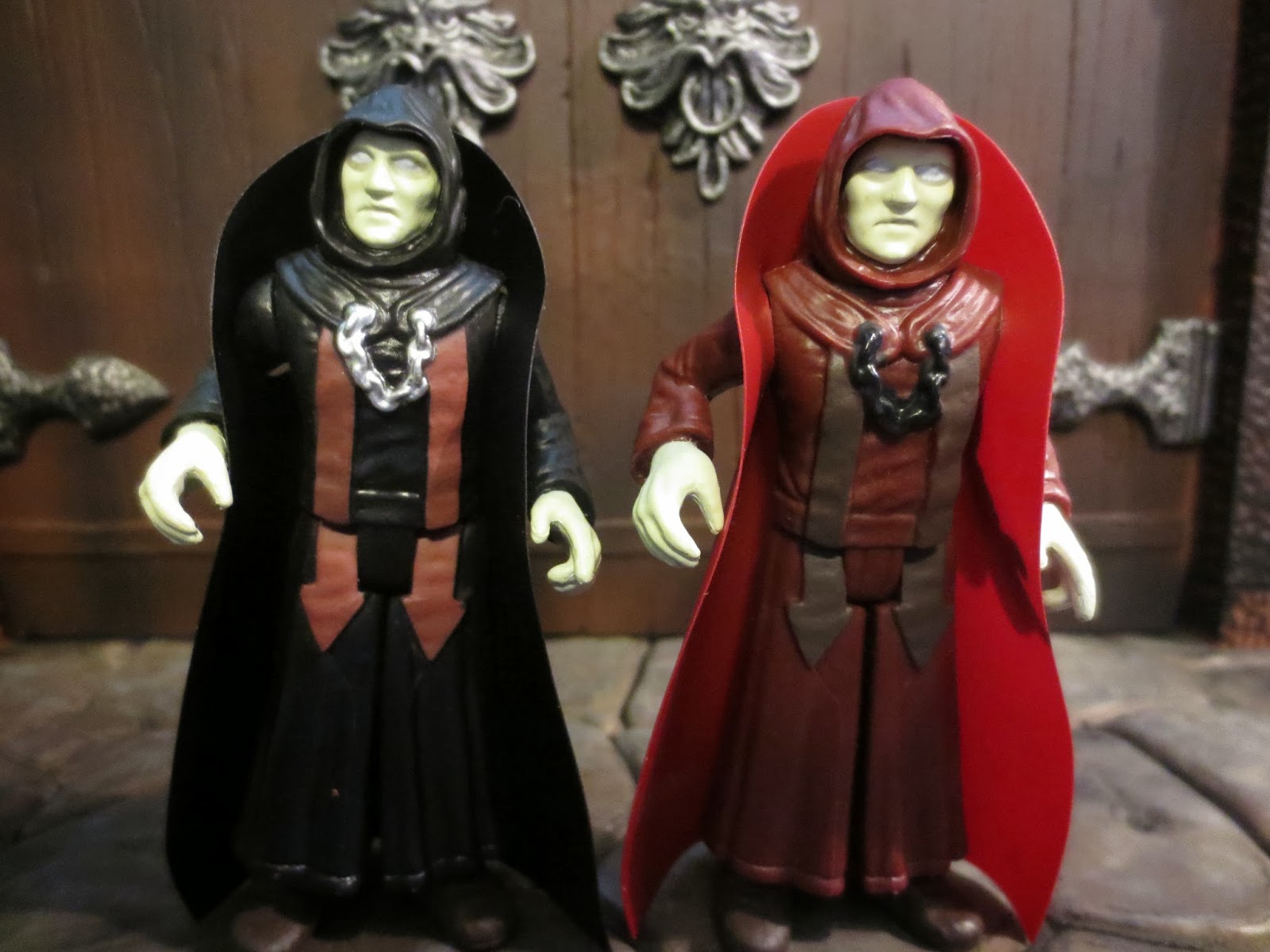 * I haven't done much with my High Priest other than stand him on my toy shelf and take pictures of him but I am noticing some paint wear on his hands. The black plastic is poking out from the paint on his fingers and thumbs.

*This isn't really a negative, but I kind of feel like the basic Cultist figure in his red robes seems more exotic than the High Priest in his black robes. It's unfortunate that the High Priest was so limited because I think I would have rather army built him as the basic Cthulhu Cultists. 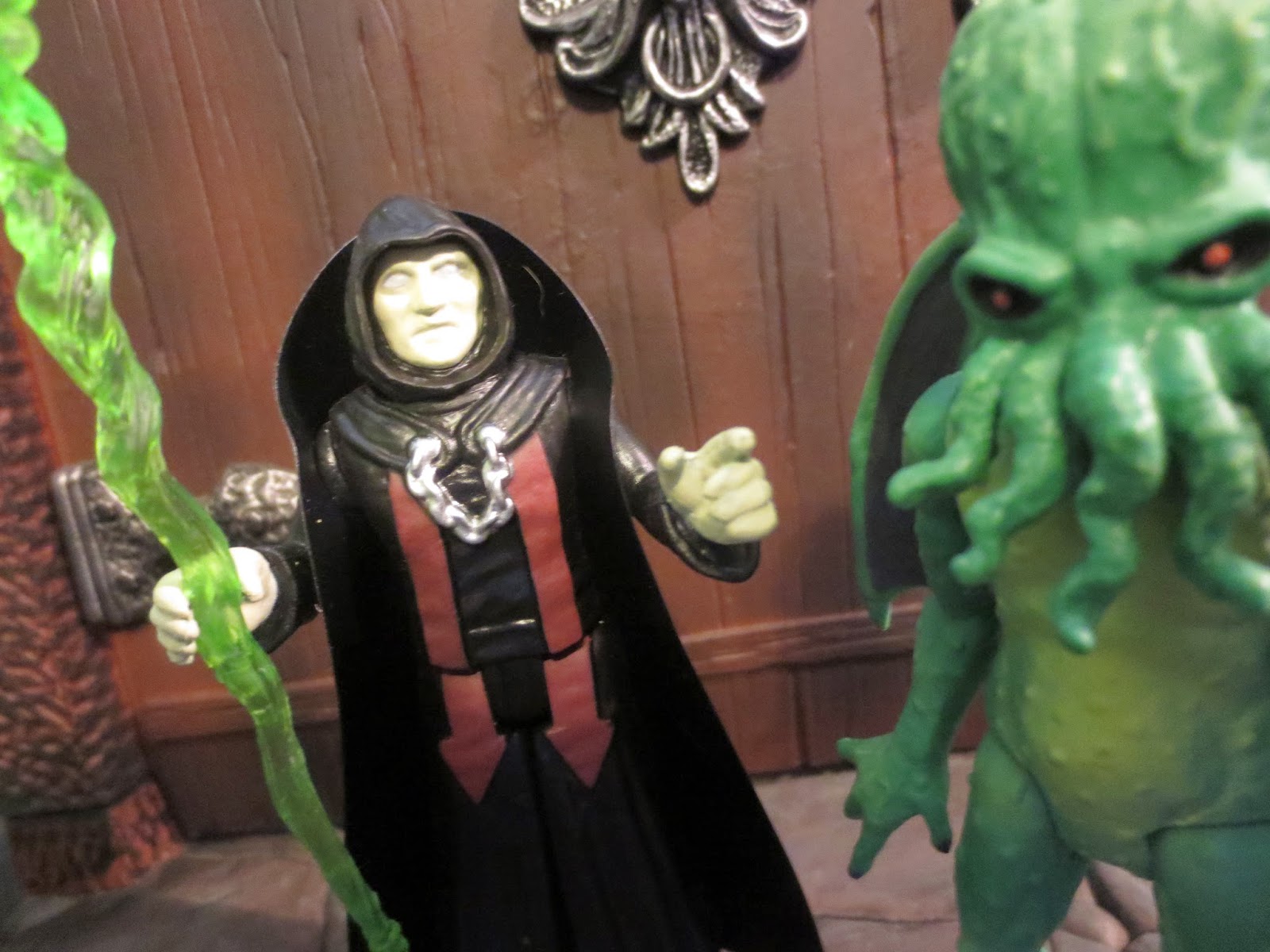 As a fan of horror toys and H.P. Lovecraft who has totally gotten swept up in the retro action figure movement, these toys are right up my alley. Like with the Cultist, when picking up the High Priest you'll be struck by how he manages to feel exciting and new and yet still invokes memories of classic toys like the vintage Emperor Palpatine, Imperial Dignitary, Charon from Clash of the Titans, and Belloq in his Ceremonial Robes from The Adventures of Indiana Jones. The design of the High Priest is quite wonderful and I could see him fitting in with a number of true or faux retro toylines. While it seems that the basic figures in the line (the Professor, the Cultist, the Spawn of Cthulh, and the Deep One) are available through some online toy stores like Big Bad Toy Store, I image that the High Priest's role as a stretch goal might make him a true Kickstarter exclusive. Like with the Cultist, I'm also giving the High Priest a Great rating. He might make a better basic Cultist with his more subdued robes but he's still a really cool figure! I've got four more reviews coming from Legends of Cthulhu, so stay tuned over the next week and weekend for more Lovecraftian love here at Action Figure Barbecue!