Action Figure Review: Flutterina from Masters of the Universe Classics by Mattel 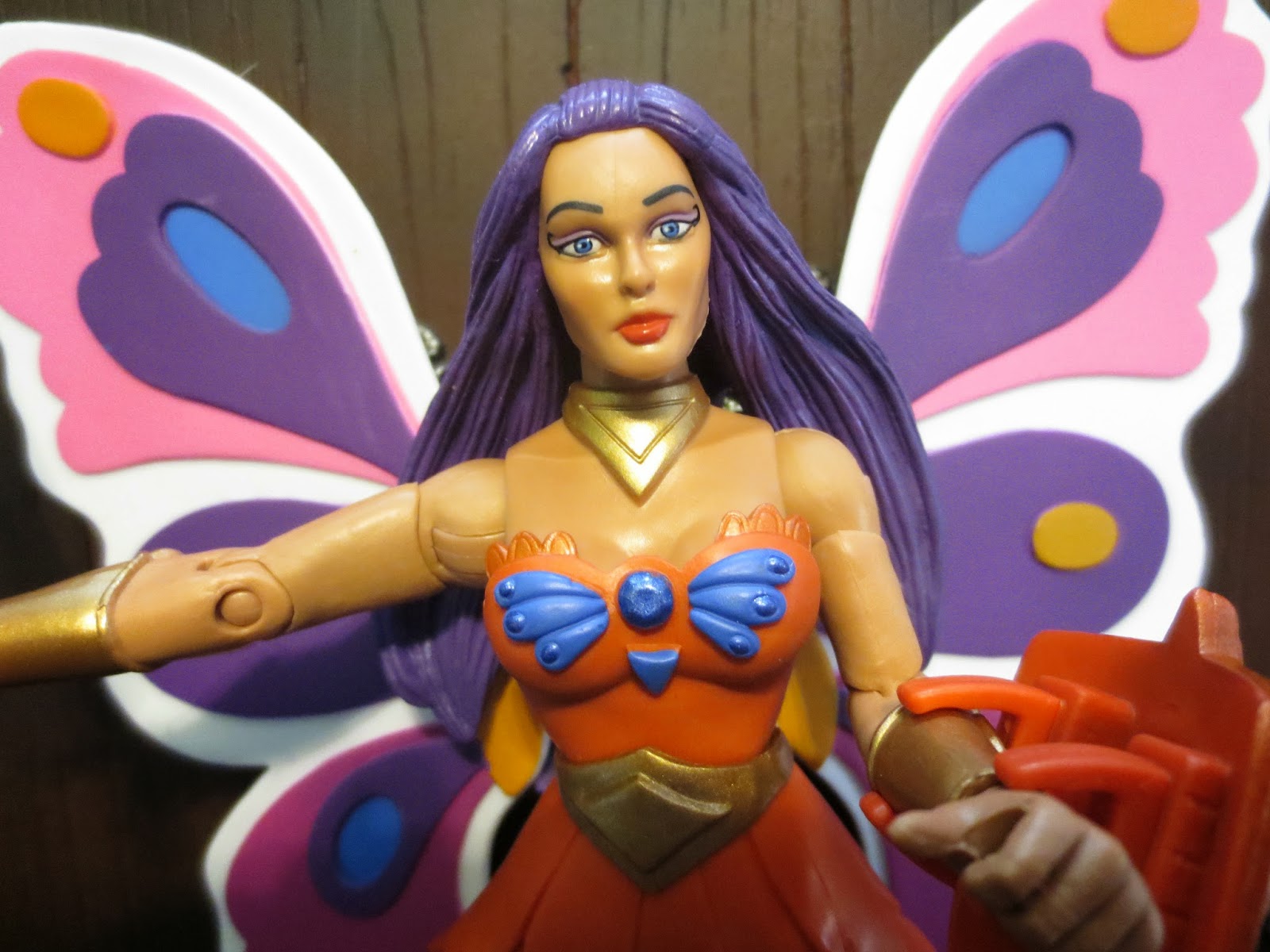 I'm reviewing some releases from back over the past year to catch up on a few Masters of the Universe Classics reviews that I missed and today I'm taking a look at Flutterina! Flutterina was the basic subscription figure for August of 2014. Her vintage counterpart was released as part of the second series of She-Ra: Princess of Power action figures in 1986 and actually fairly closely resembles her Filmation counterpart. It seems that most of the second series figures were far more accurate to the animation (or maybe it was the other way around) and I'm going to go out on a limb and say most MOTU fans prefer the Filmation looks over the vintage toy looks. So who is Flutterina? She's the "Beautiful 'Flying' Lookout, presumably, of the Great Rebellion. Why is "Flying" in quotation marks on the bio and package? Probably because Mattel didn't want to get sued by someone claiming that their Flutterina didn't really fly. Of course, Glimmer doesn't really "Light the Way" and the Castaspella toy doesn't really "Hypnotize" anyone, so maybe I'm just barking up the wrong tree. Let's just talk about this super cool butterfly lady..... 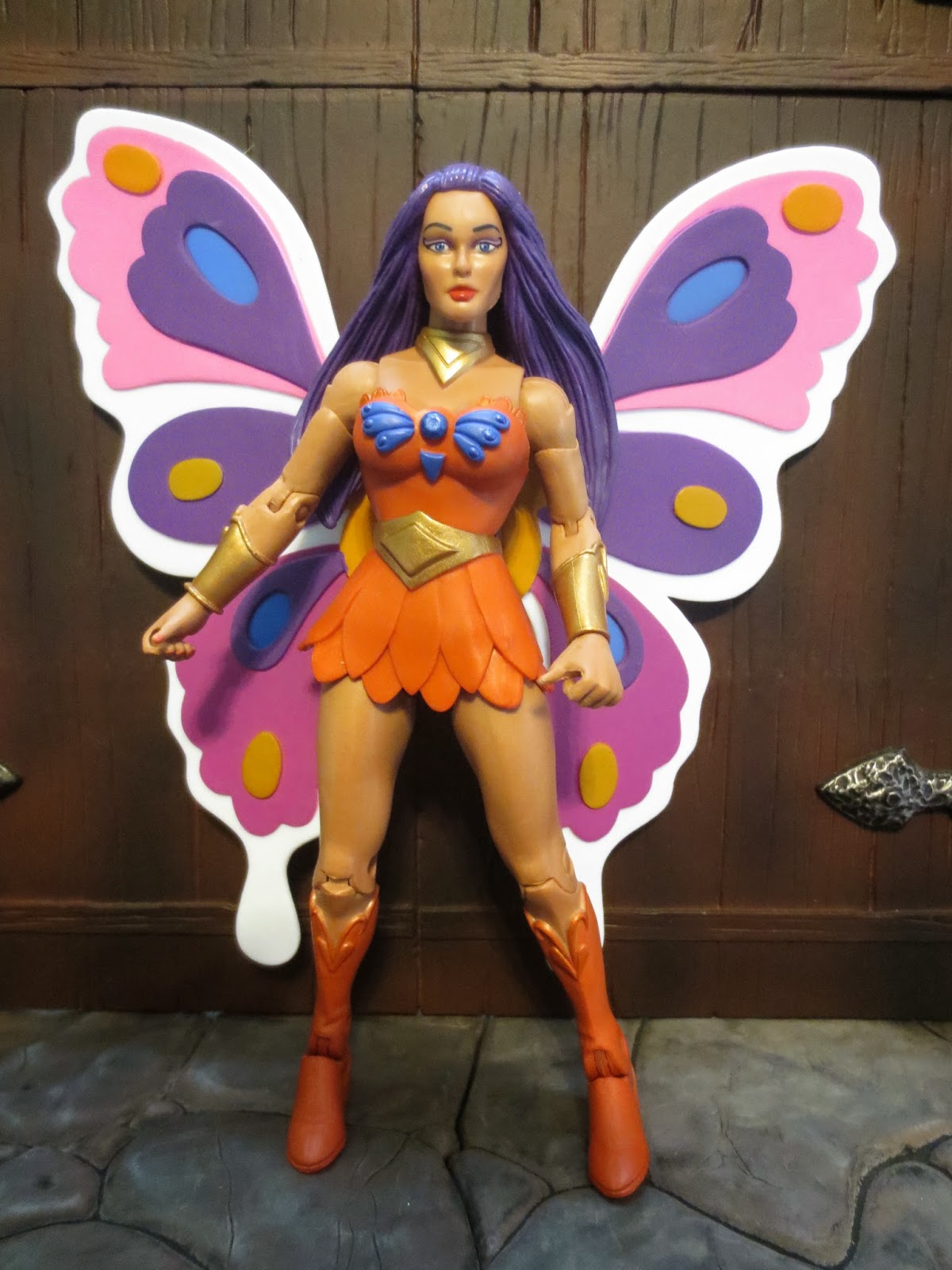 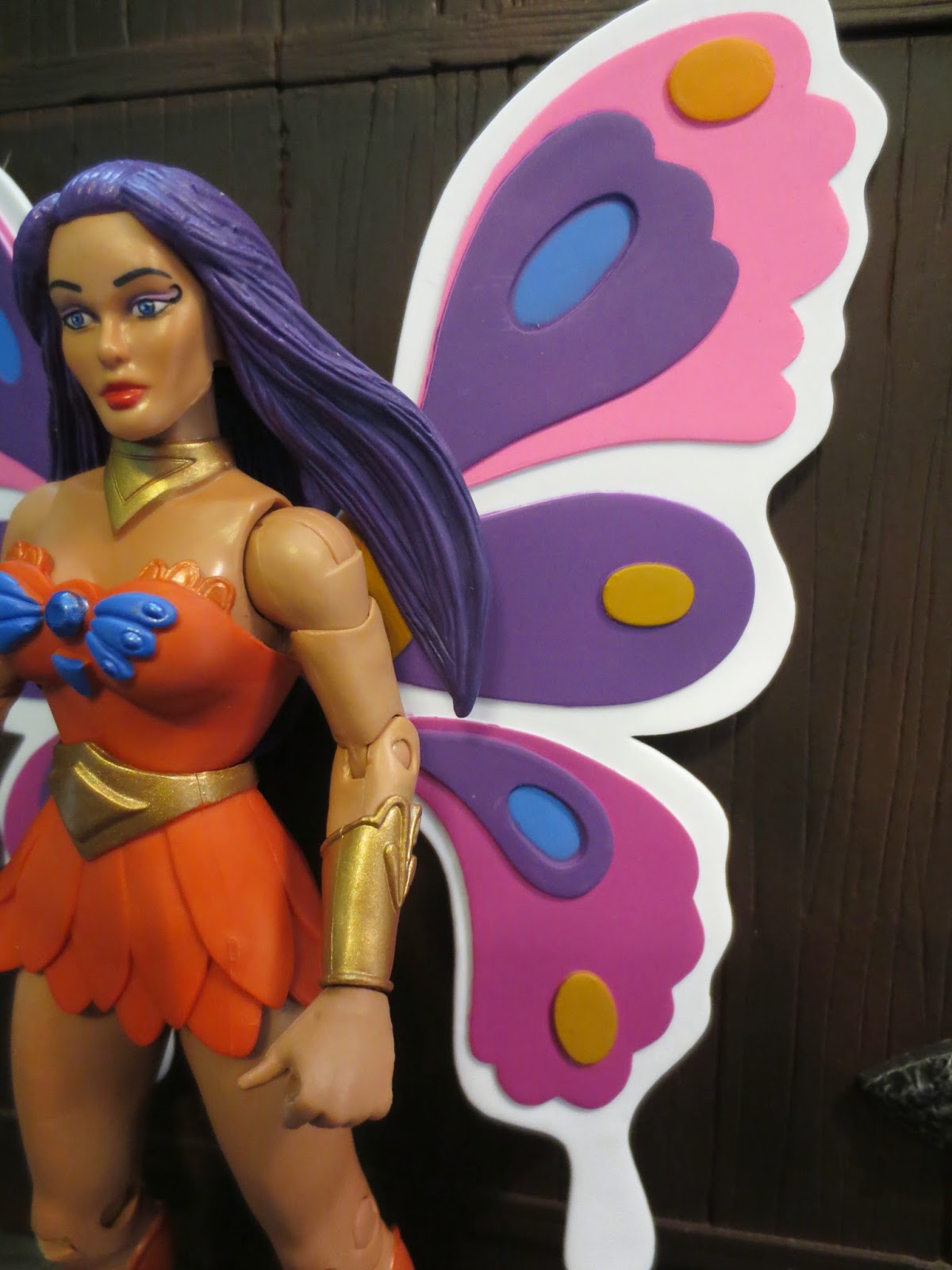 * First off, I'm loving the wings. They're bright, colorful, and look like they're made from that delicate foam-like material that you use for making crafts. They not only give Flutterina a decidedly unique silhouette from her other Great Rebellion members but they also really giver her a very different color scheme. The bright white of the wings really stands in stark contrast to the pinks, purples, and oranges it surrounds. 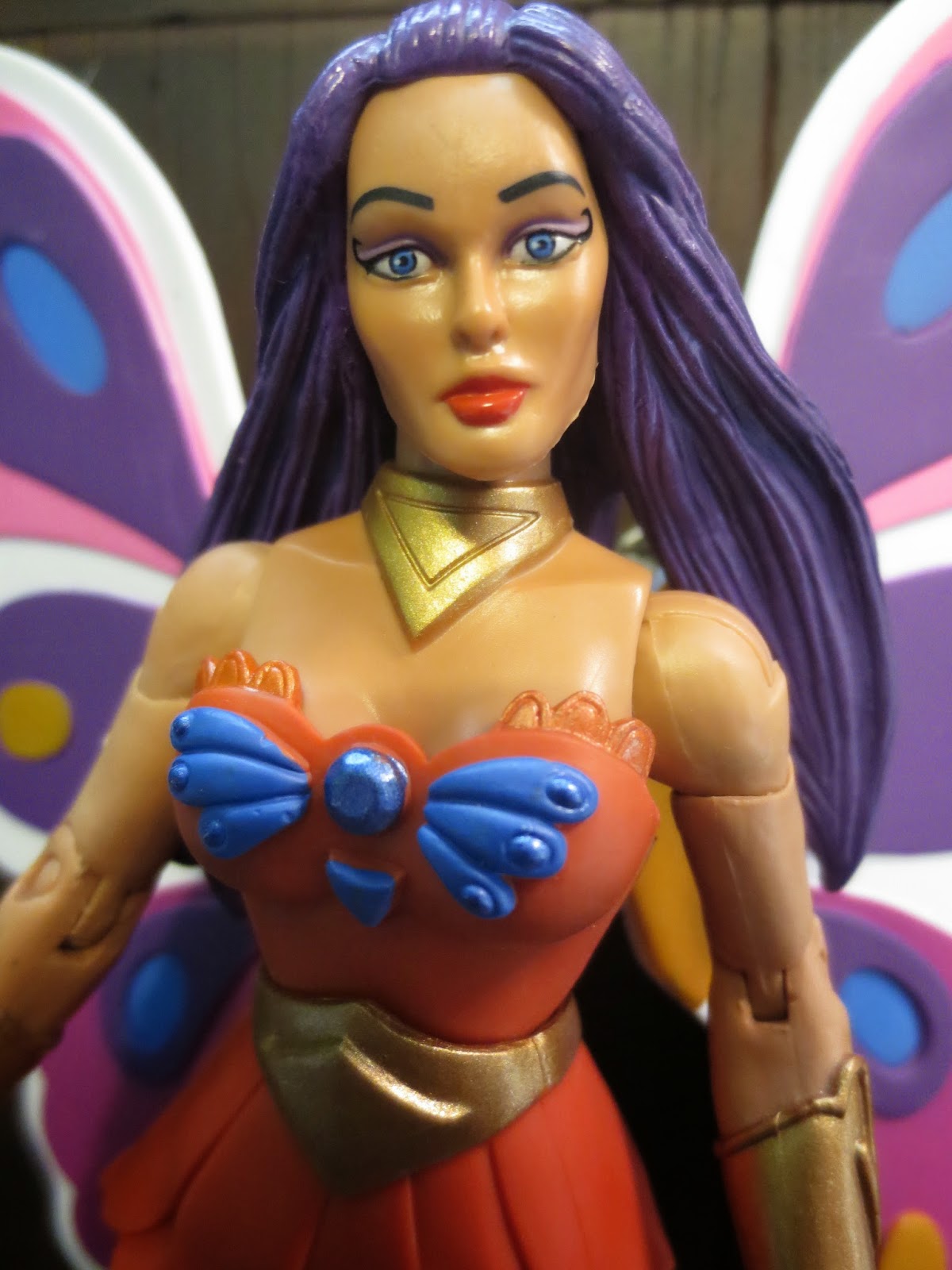 *Flutterina's headsculpt is quite lovely. She has a gorgeous face sculpt with a rather neutral expression. The paint is well applied, particularly the curly eyeliner she's wearing. Neat little extra that seems to tie in with the butterfly theme. The hair is also pretty cool. It's actually sculpted in the pack so that it flows around the wings. 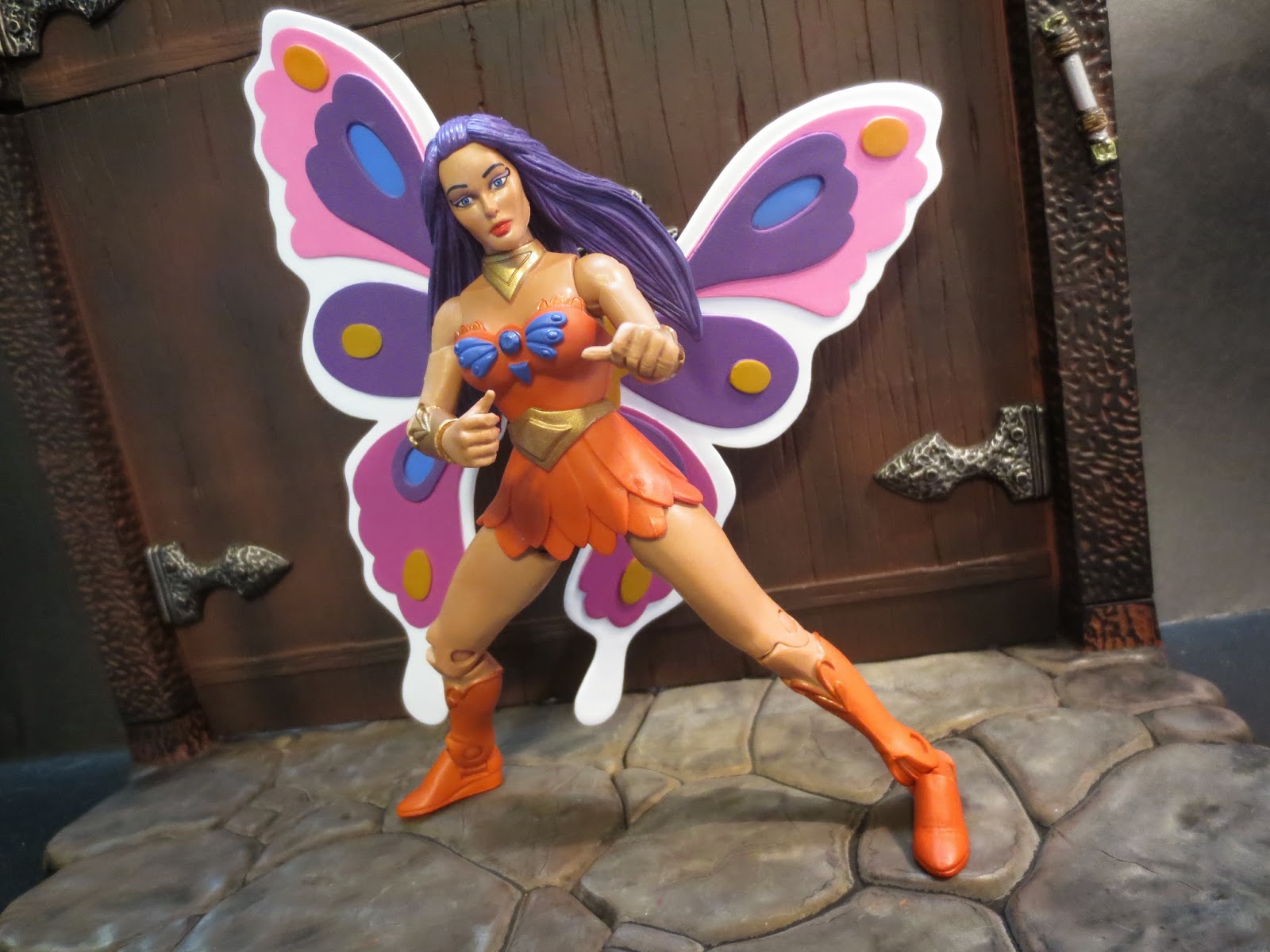 *Flutterina's uniform is simple but fitting. I'm loving the orange dress she's wearing, and the metallic gold on her bracers and choker really help it to stand out. This just seems like a very different color scheme for a POP female. The smaller blue details on the bodice are rather intricate and have an excellent paint job. 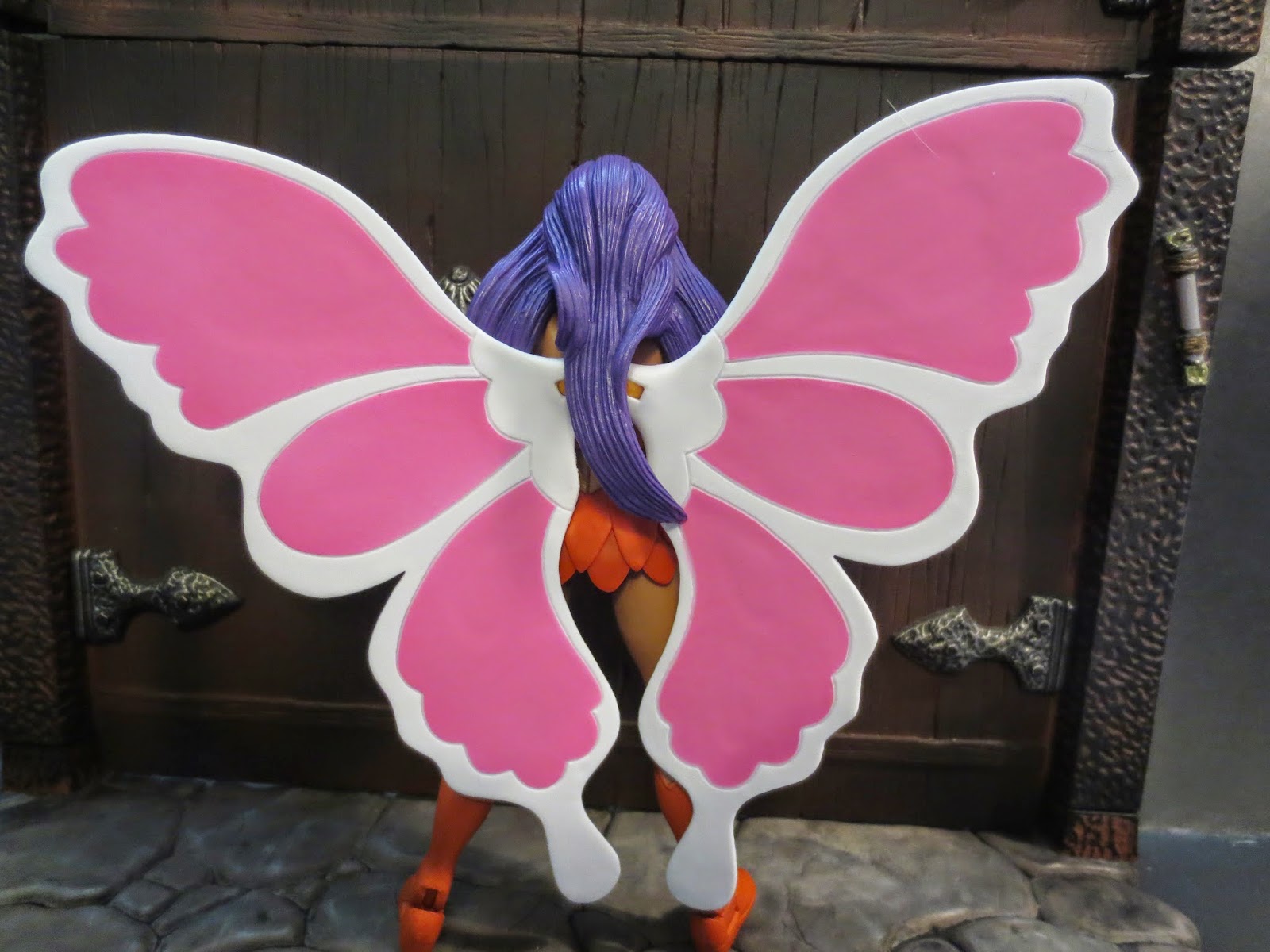 *I often forget to say this with MOTUC figures since I've reviewed so many, but the articulation is almost always perfect. Very well thought out and solid. I know people like to give Mattel a hard time (they definitely deserve it quite often) but the quality of the articulation has been stellar overall for quite a few years now. I love that Flutterina has actual lateral joints on her ankles in addition to the vertical hinges. 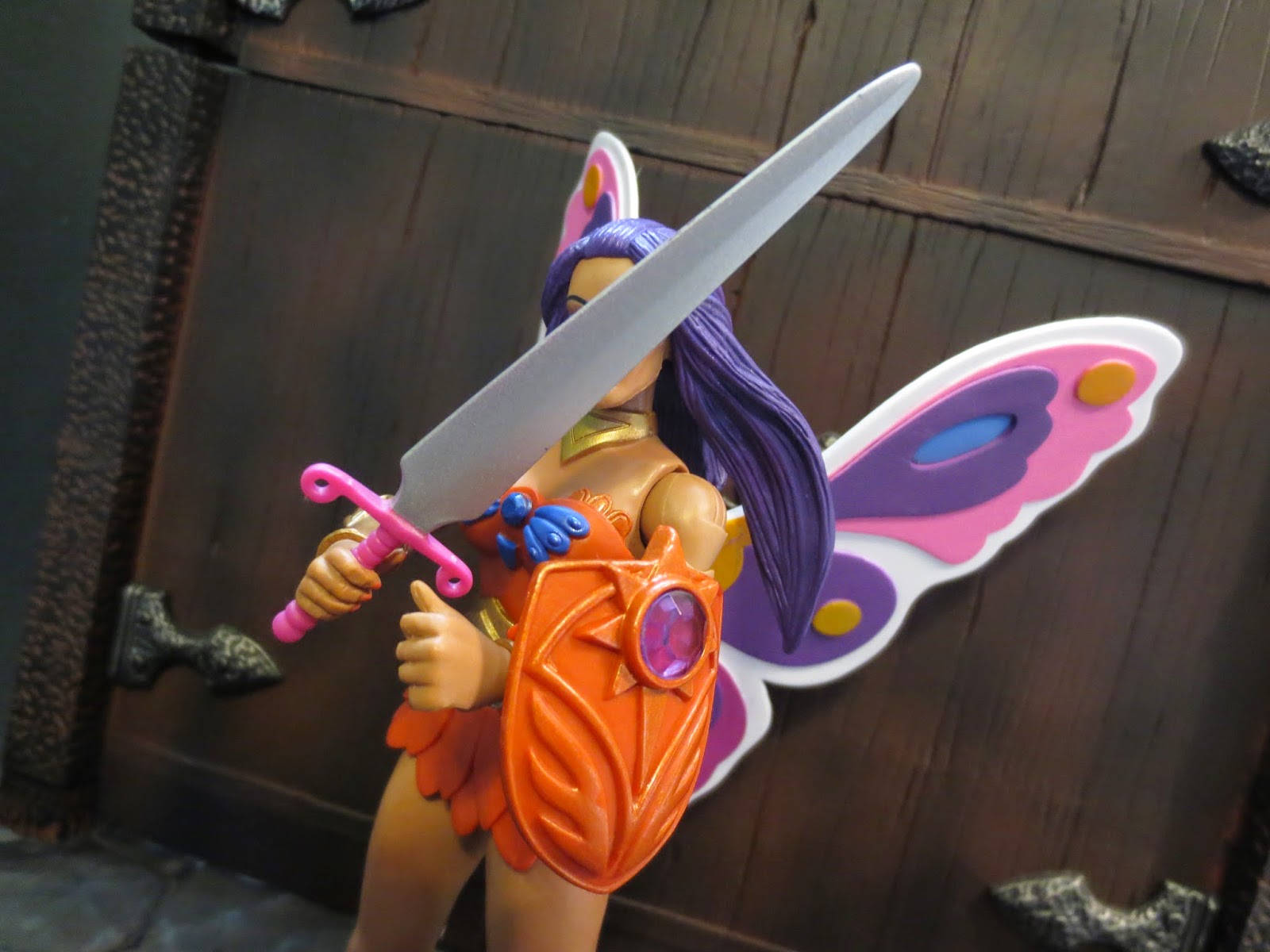 *It's probably due to Flutterina's wings but I'm a bit disappointed that she only comes with a repainted version of Battleground Teela's sword and a shield. Mattel and the Four Horsemen have been so creative in creating new weapons and accessories for most of the MOTU based figures while the POP gals have been plagued by reuse and repaints. 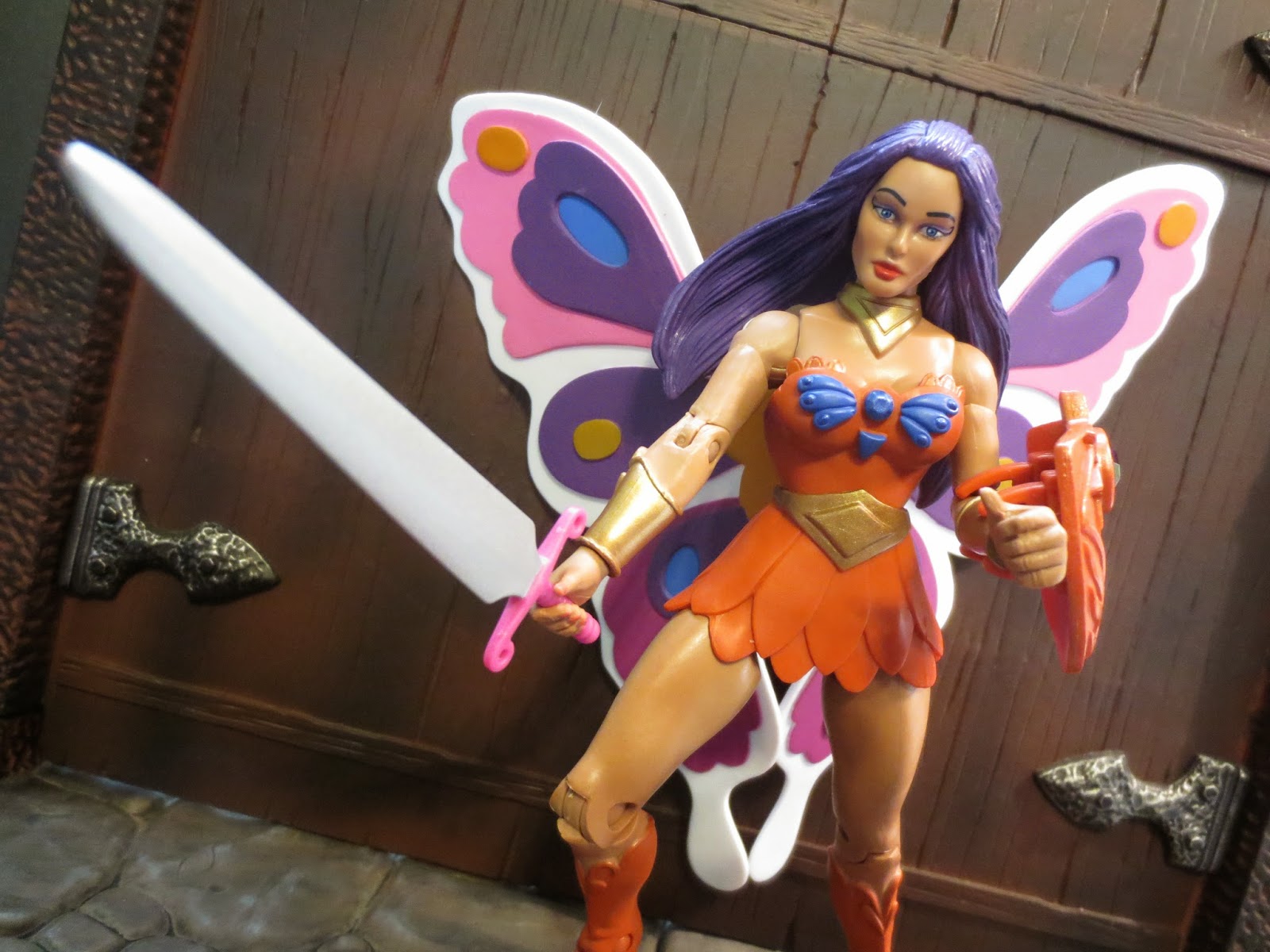 I'm a big fan of this figure. Flutterina was definitely not one of my most anticipated figures but she turned out wonderfully. With well over 100 figures in the line I definitely appreciate a MOTUC figure that stands out from the rest due to some unique feature. Not only is Flutterina our first flying female but her unique wing design and color scheme is rather eye catching. I just wish Mattel had decided to put a bit more thought into her accessories as I think a butterfly themed warrior could have had a lot of options for unique armaments. Still, Flutterina is a Great figure and one worth looking into if you haven't already snagged her.