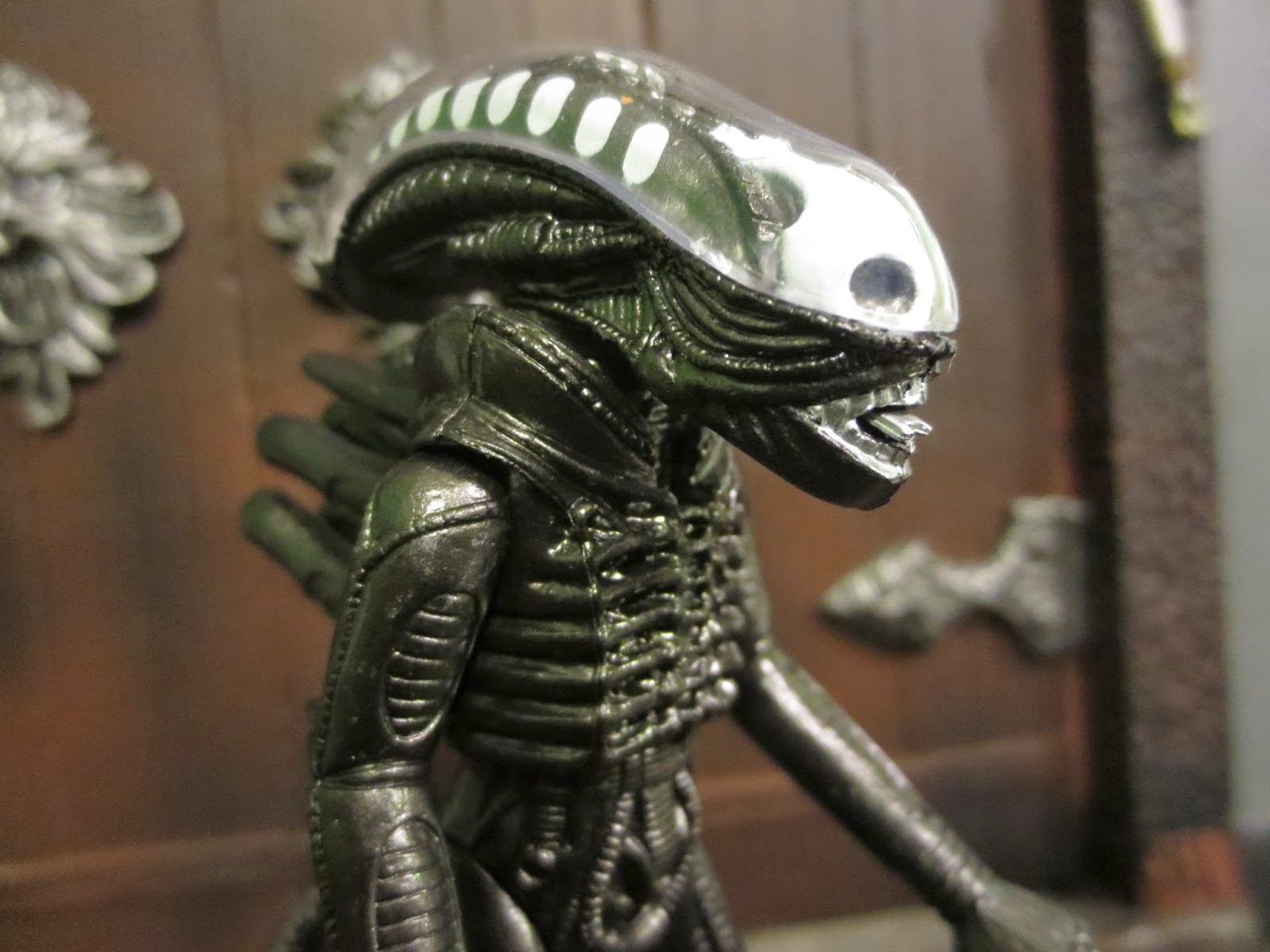 You know what one of the best things about being married is? Not only do we have Christmas with my family but we also celebrate Christmas with my wife's family, too! Today is part 6 of Barbecue's Christmas haul and today I'm looking at an action figure gift from my in-laws: The Alien with metallic flesh from Funko's Alien ReAction line. This paint variant of the previous Alien figure is part of the second series of figure's from Alien ReAction and comes on a very cool retro inspired blister card. The first series Alien is the only other Alien ReAction figure I owned from series one but I like the sculpt so much that I wanted this metallic fellow, too. The blister card for this figure shows an image of the Alien floating in space from the end of the film; is this supposed to represent him perhaps being covered in frost and freezing in the cold vacuum of outer space? Who knows? Ready for a look at the Alien? Then join me after the break... 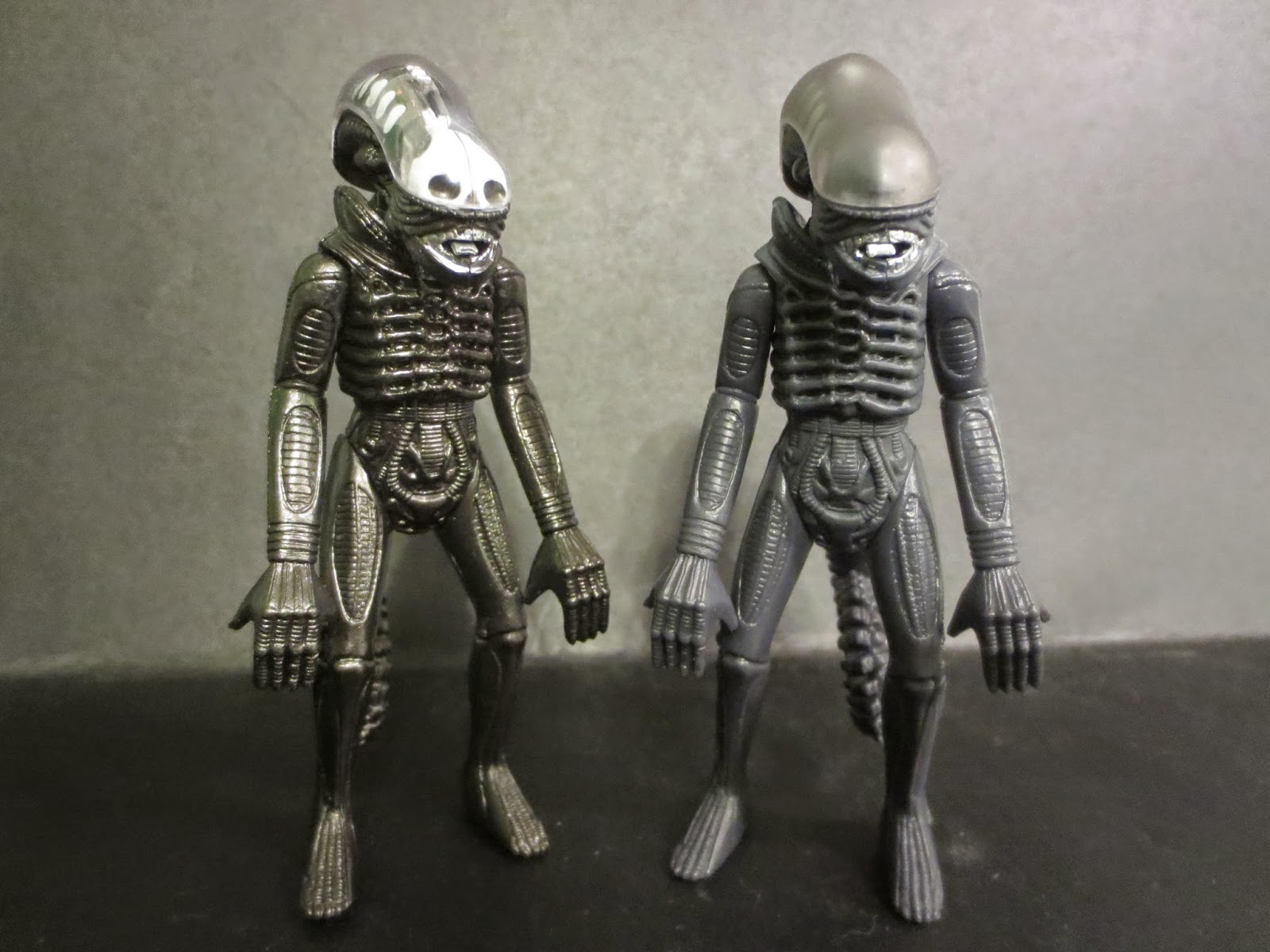 The Alien stands just a hair over 4 and a 1/2 inches tall (he's a big chap) and looks suitably menacing when compared to most other 1/18th scale figures, particularly vintage Star Wars figures and other ReAction characters. The card art on the ReAction stuff is so cool that I actually just slit the side of the blister close to the base of the card, allowing me to remove and insert the figure from the blister as desired. 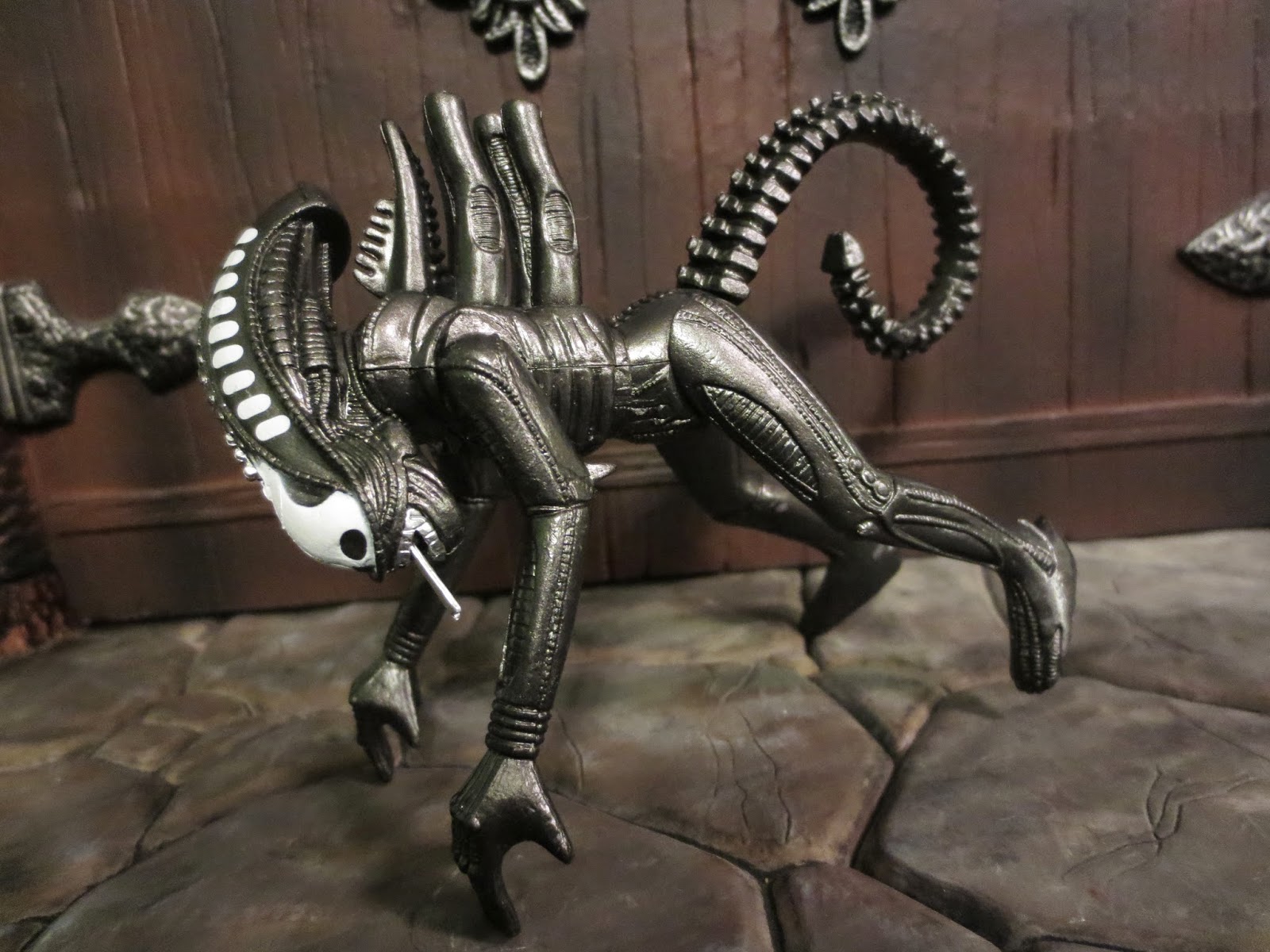 Just like the former Alien figure and most other ReAction figures, this guy features limited articulation: Swivel thighs, a swivel tail, swivel shoulders, a swivel neck, and a retractable tongue. There is a little slide on the top of the Alien's cranium (underneath the removable dome) that allows it to slide in and out quite easily. He feels very solid and durable and it quite fun to play with. I'm glad he has a v-crotch for his hips since it allows him to more easily take quadrupedal poses, which he does quite well. 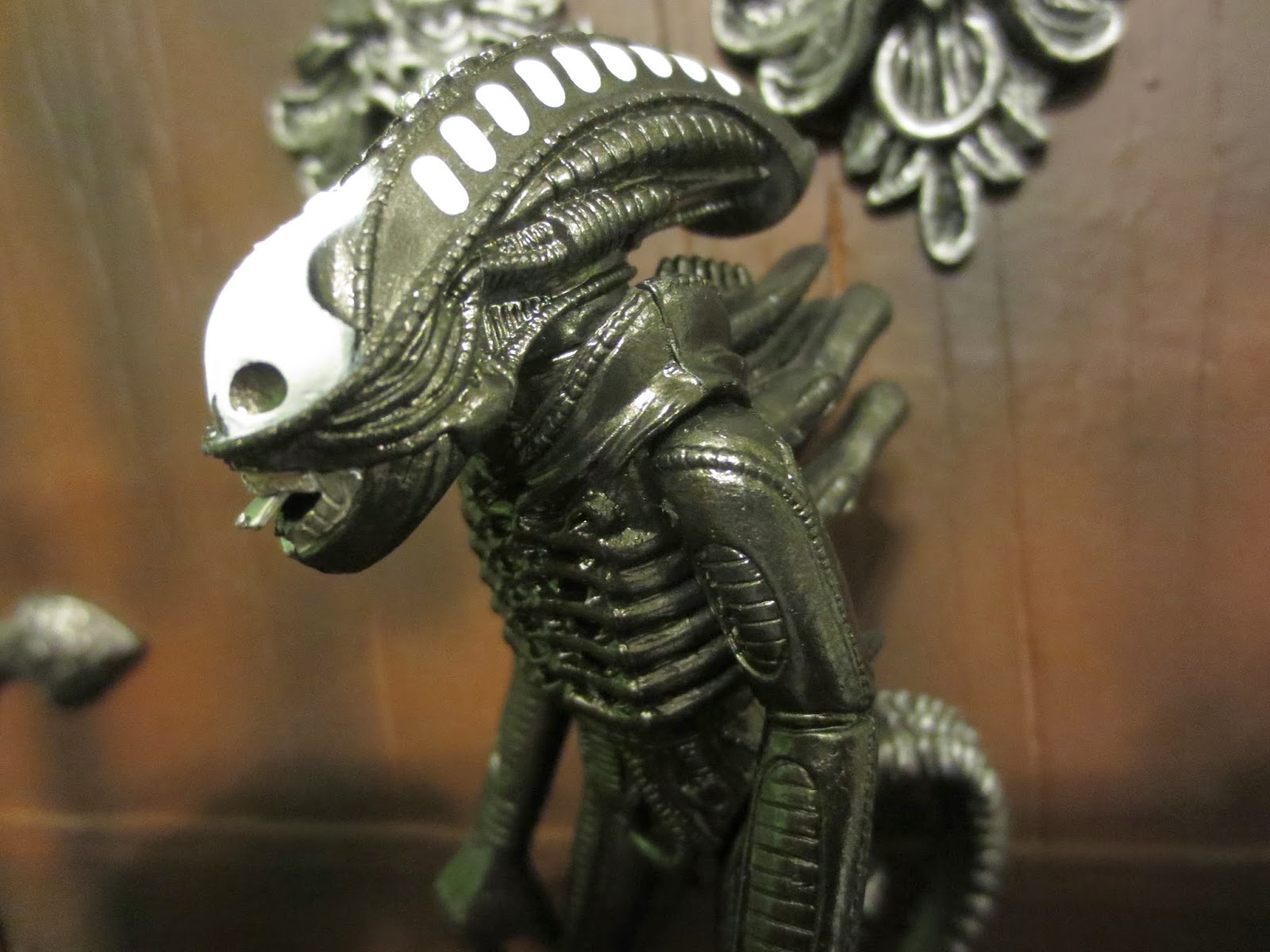 The current "retro styled" action figure trend really begins with Funko and Super7 crafting the Alien ReAction line based off of Kenner's prototype action figures from 1979. This Alien sculpt is exactly the same as the one from the first series and it's gorgeous. Had this figure been released in 1979 or 1980, it truly would have been a game changer. It's far superior in detail to anything that existed in the vintage Star Wars line until maybe the last year of Return of the Jedi figures or the 1985 Power of the Force line. The grotesque mixture of organic being and machine like precision that H.R. Giger designed is lovingly rendered in this 4 1/2 inch monstrosity. Details like the spikes on the Alien's back, the curled tail, and the six elongated fingers really make this a truly impressive figure. 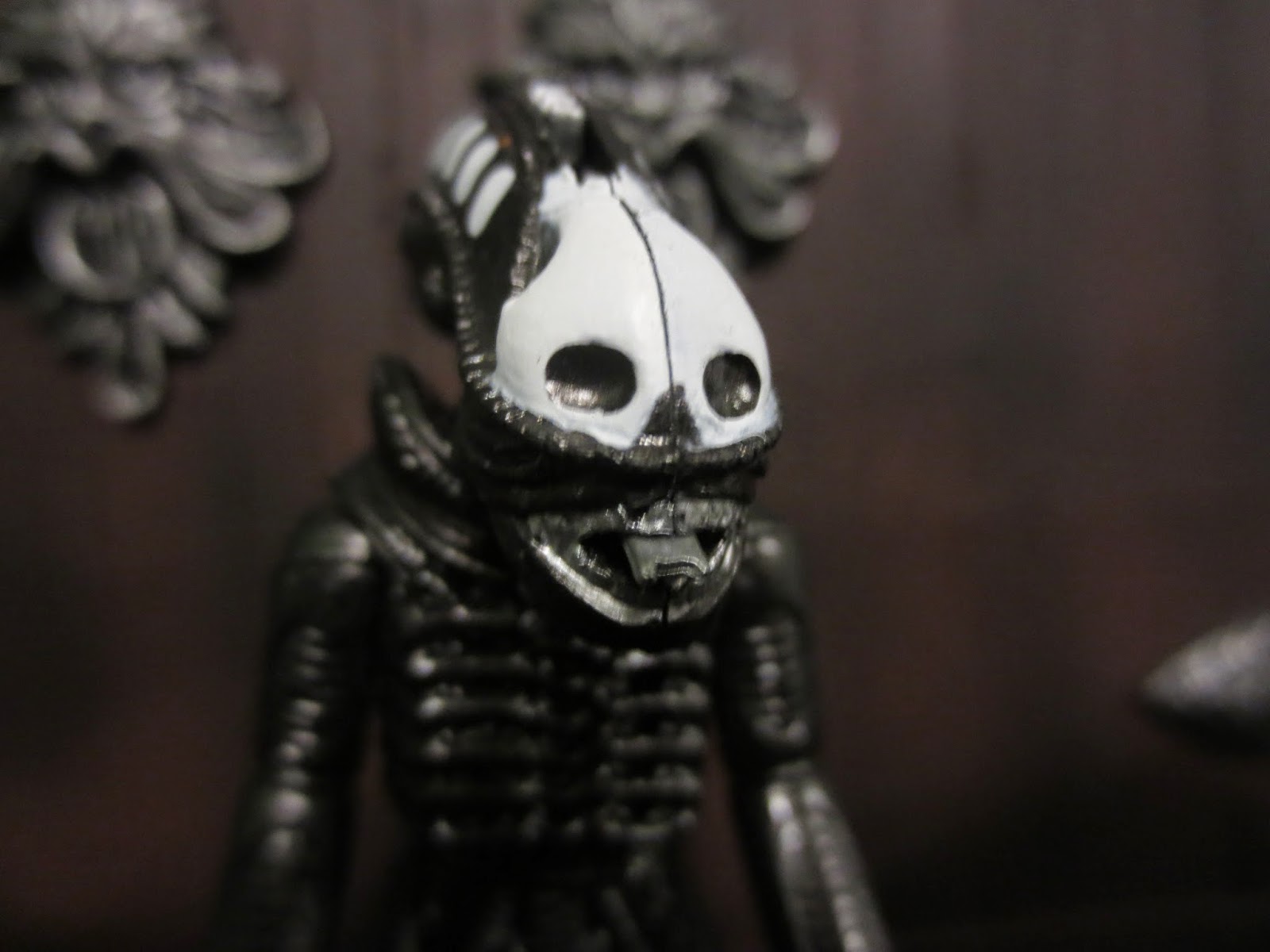 I'm digging the paint work as it truly differentiates this figure from it's predecessor. While the shiny black paint stands out from the matte gray of the first figure, it's the paint on the cranium that elevates this figure to a new level. You see, inside that domed cranium are some empty sockets that kind of make the upper part of the Alien's head look like a skull. Well, Funko painted that section and the "brains" of the Alien with white paint. Not only does this create a stark contrast between the black and white colors but it intensifies the skull like quality of the Alien's visage. It looks really, really freaky! 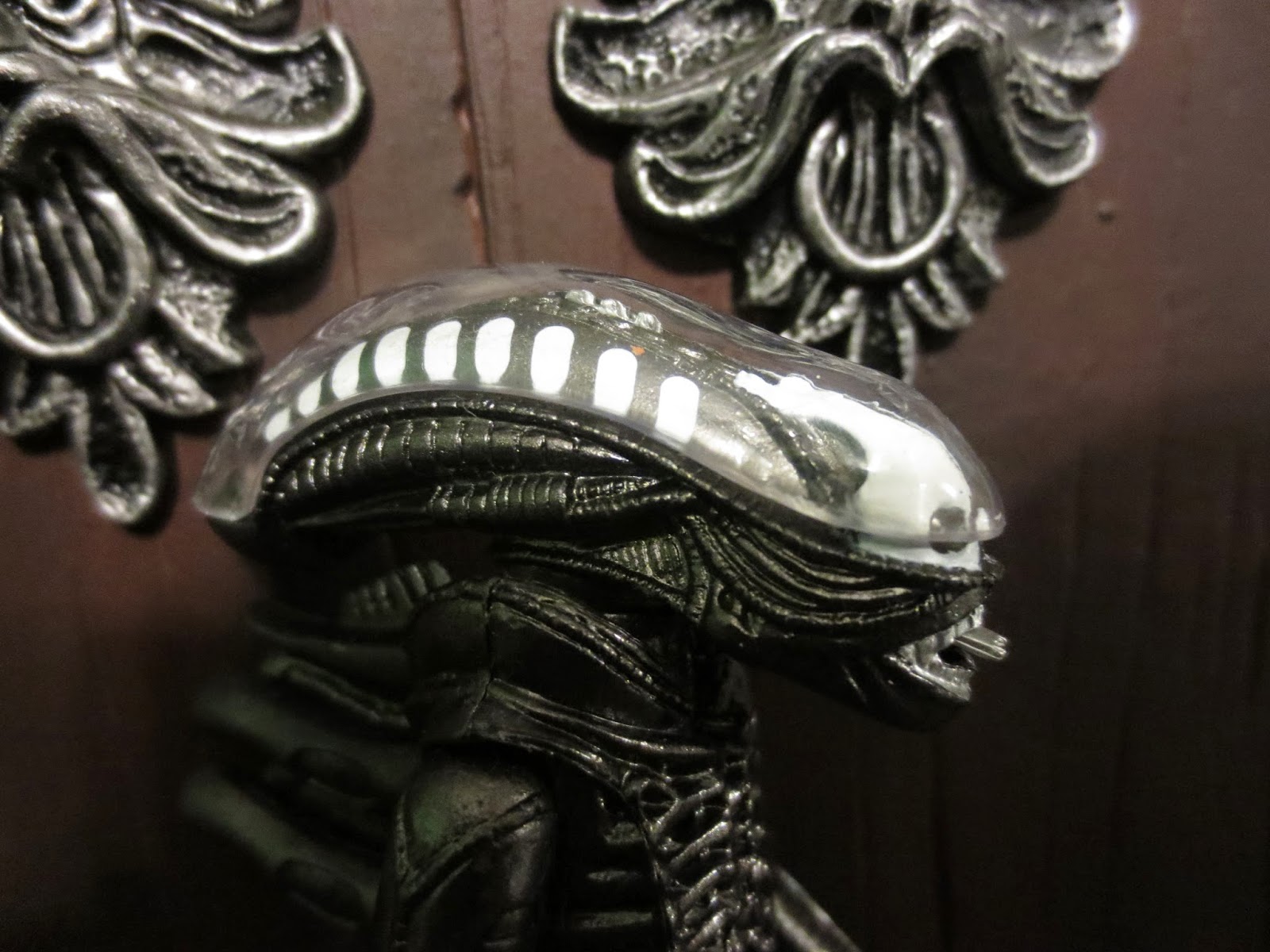 The only accessory the Alien comes with is a removable dome. It's a clear plastic dome that fits over his elongated cranium. It doesn't stay on as tight as I'd like but it won't just fall of by itself. It's a neat feature that harkens back to the prototype. 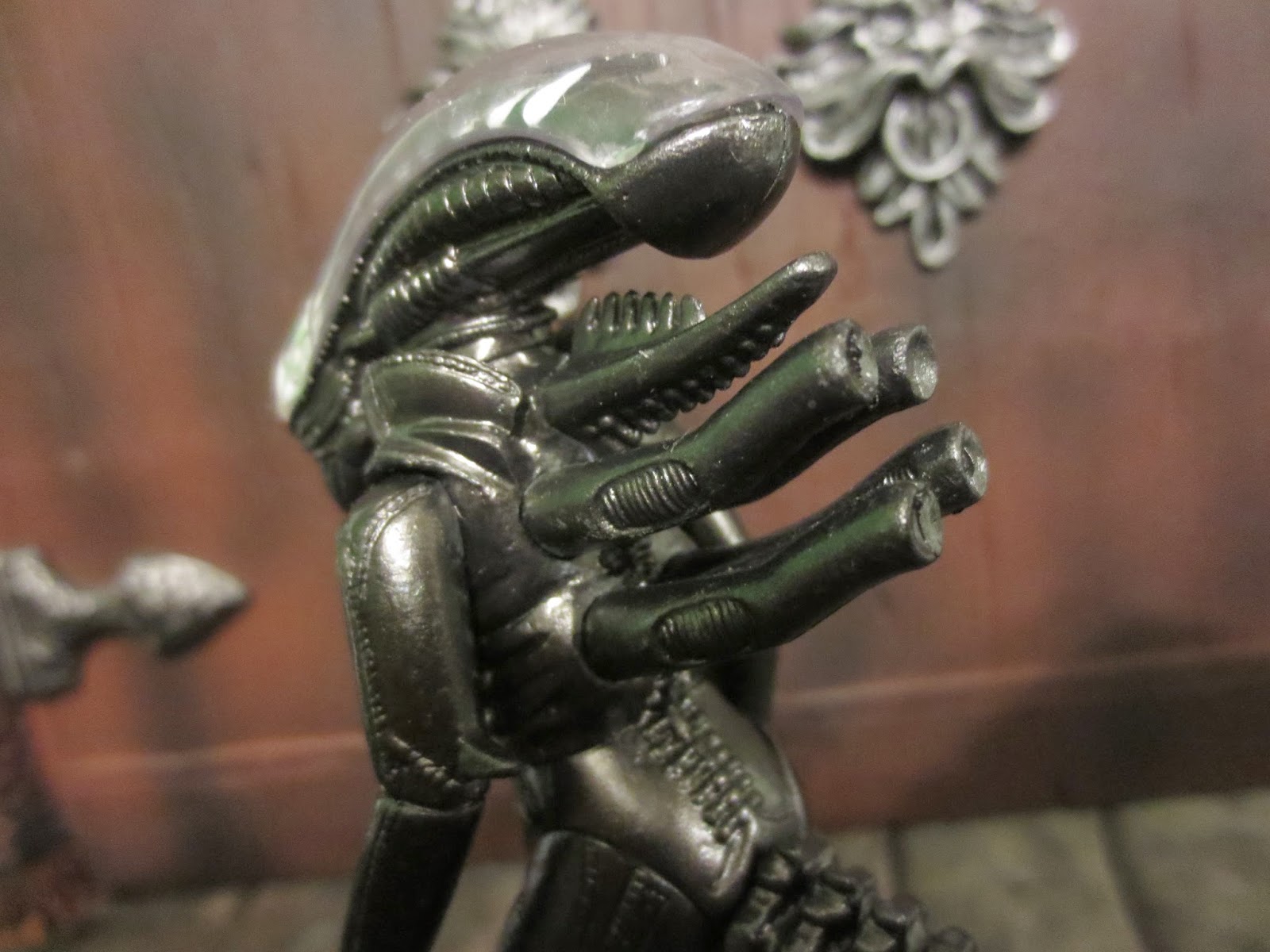 The whole "retro" toy thing has been one of my favorite trends of the past year and I'm excited to see that things look strong for 2015. The Alien might be not just one of the best figures in this style of last year but perhaps of all time. He's elegant in his simplicity and has a bold, defined presence for such a small toy. I feel like Funko could rerelease this Alien in a few different paint jobs and the figure would still be interesting. I know I'd like to see it in metallic blue, brown, and perhaps a maroon or red. They might not be film accurate but when did that ever stop vintage toymakers? This guy easily gets an Epic from me.

I've reviewed a variety of Alien/s based toys, including: