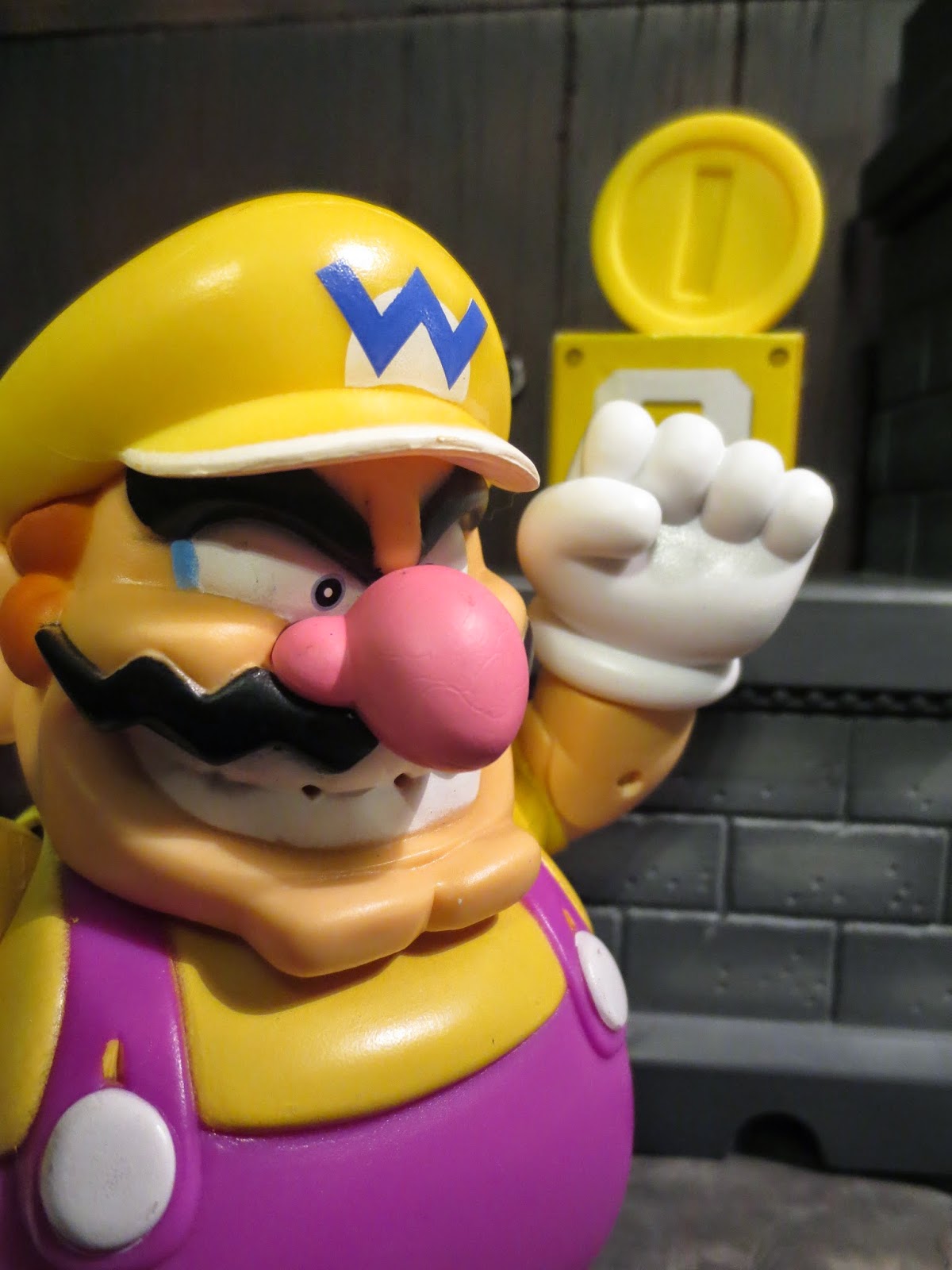 As a kid I always wanted Nintendo based action figures. Having received my NES as a Christmas gift in 1987, it goes without saying that Nintendo was a dominant part of my childhood. I'd make due with whatever Nintendo based toys I could get my hands on including PVC figurines and McDonald's Happy Meal toys, but it still always perplexed me that no company really tried a full fledged Nintendo action figure line. Over the past decade or so, though, a few companies have attempted a few figures here and there. The past year or two have seen the announcement and release of a few cool Nintendo characters like the Figma Link and the S.H. Figuarts Mario but I want an expansive toyline. When I first saw Jakks Pacific's "World of Nintendo" line, I thought they seemed kind of cool but were going to be one shots of Mario, Yoshi, and Link. When I learned about all of the cool upcoming toys Jakks Pacific has planned for "World of Nintendo" I quickly changed my tune as this sounds like the Nintendo line I've always wanted. Samus and a Metroid? A Goomba and a Skull Kid? Shy Guys? Sign me up now. I quickly snatched up the figures I could find and it's one of those 1-1 figures I'm looking at today: Wario! First appearing in Super Mario World 2: 6 Golden Coins (my first Game Boy game) and later headlining the insane WarioWare series, Wario has become a much beloved evil version of everyone's favorite plumber. Ready for a look at Wario? Then join me after the break... 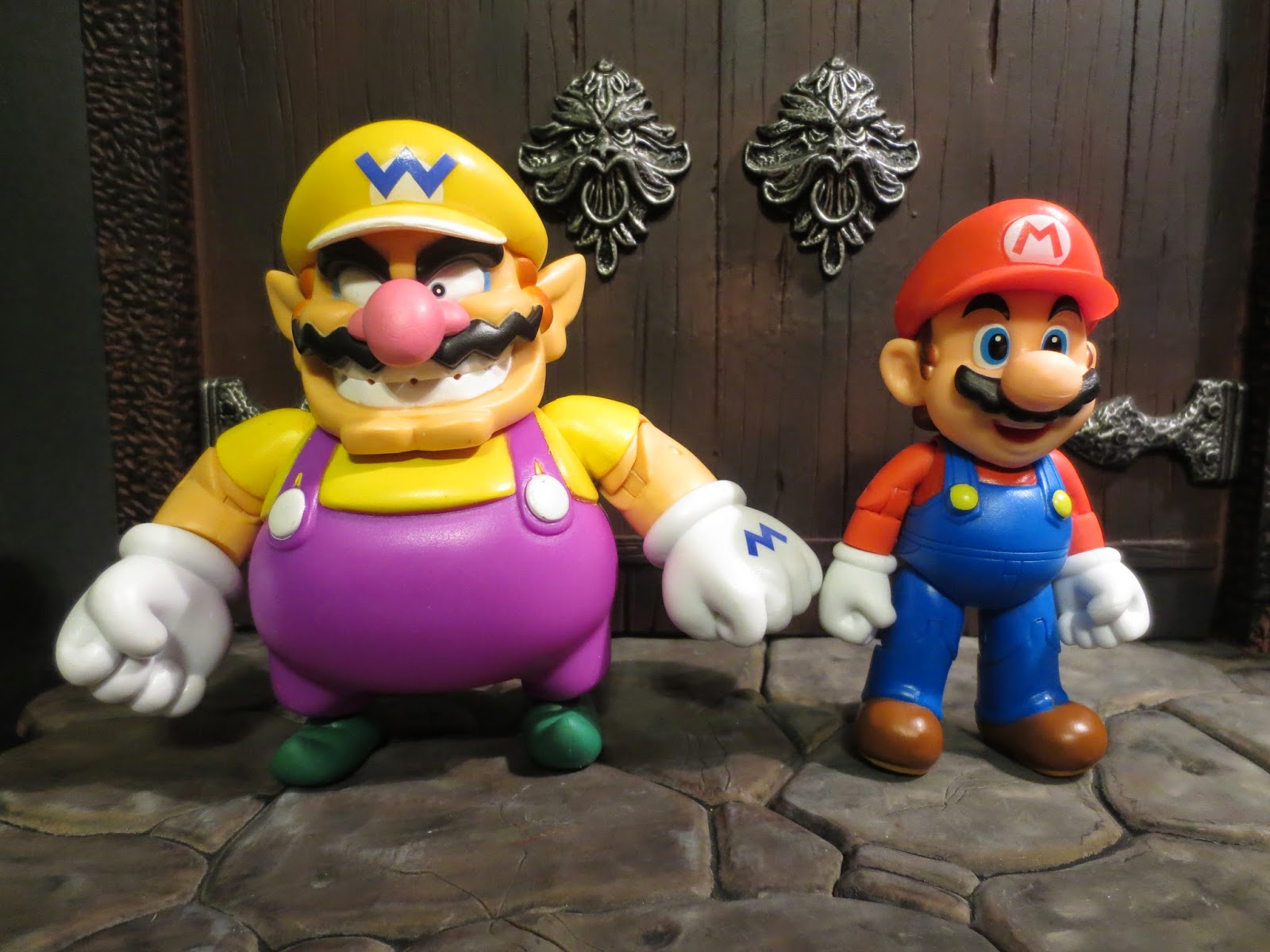 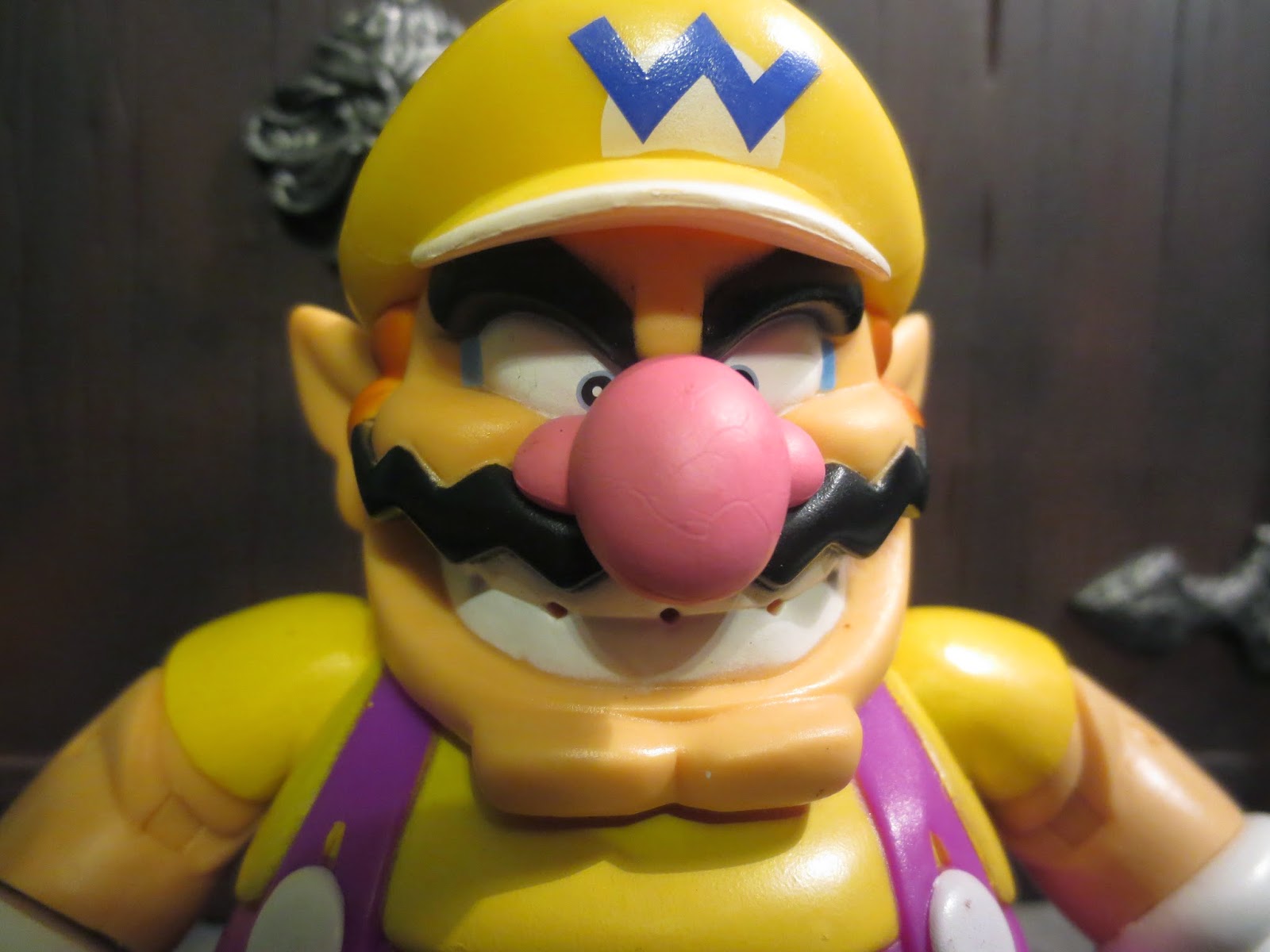 * I really like the sculpt and style of this line. Many of the Nintendo characters don't have the most action figure friendly bodies (thank round and oddly proportioned) so Jakks just had to embrace this. Wario really looks like a video game character with his funky proportions and rounded, animated appearance. The wiggly wavy mustache, portly build, menacing eyes, and chin that could give Bruce Campbell a run for his money all work together to create a unique looking toy. 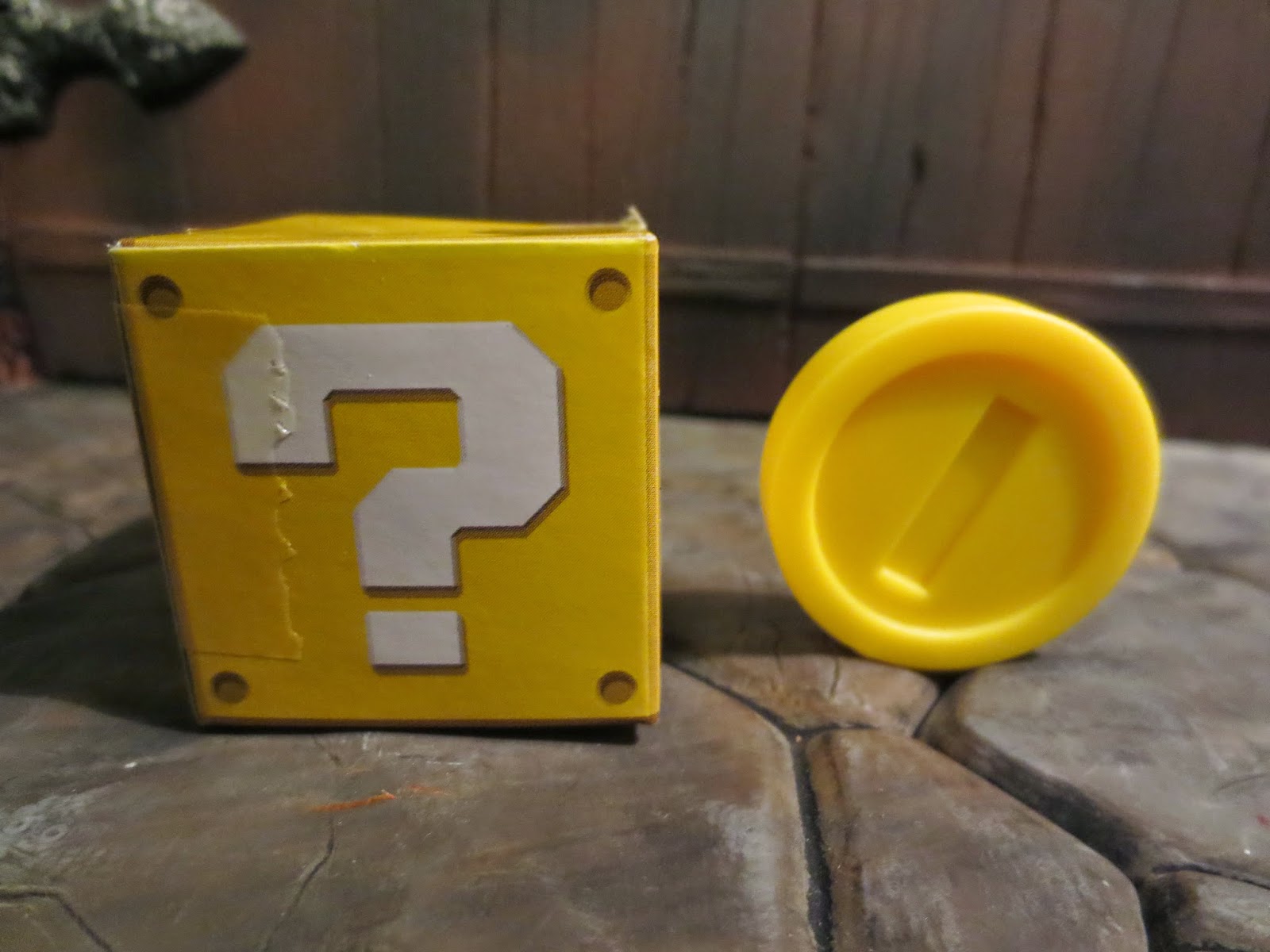 *While I've bashed the idea of secret accessories on collector focused lines like Masters of the Universe Classics as being a bit silly, it works much better in a retail focused line that also targets kids and casual buyers. Putting Wario's secret accessory inside of a question mark shaped cardboard box is rather brilliant. The secret accessory is really fun, too! It's a coin! It's a simple sculpt but a fun extra nonetheless. 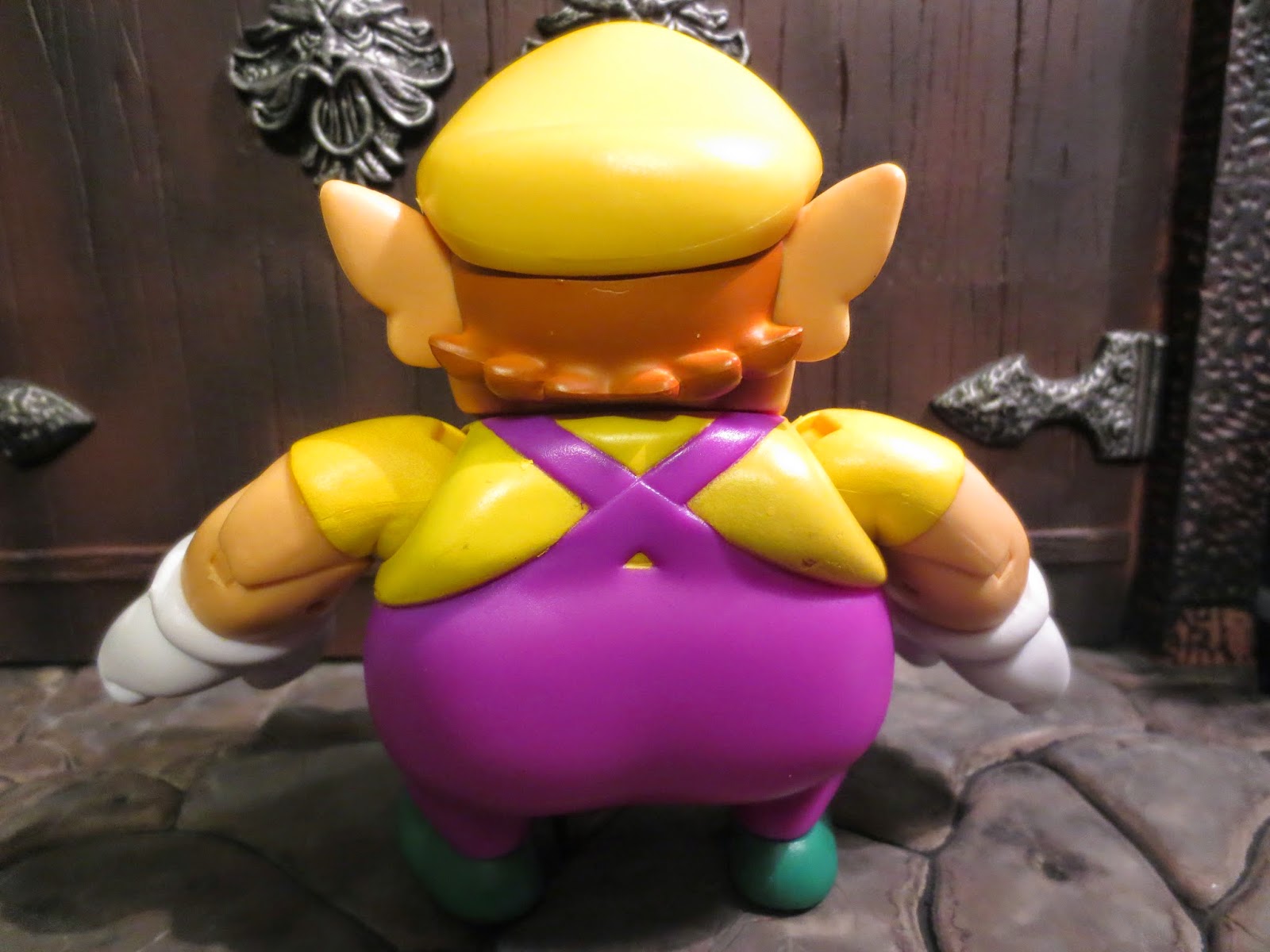 *I like most of the paintwork. It's very bright and garish, just like Wario. I'll mention that even the soles of his shoes receive a brown paint app. Most of the paintwork, particularly the "W" stamp on the hat and the face, are neat and clean...

* Well, most of the paint is neat and clean. Some elements, though, like the whites of the eyes and the yellow of Wario's shirt, are quite messy. It's not a deal breaker but you might want to buy this at retail so you can pick out the best paint job. 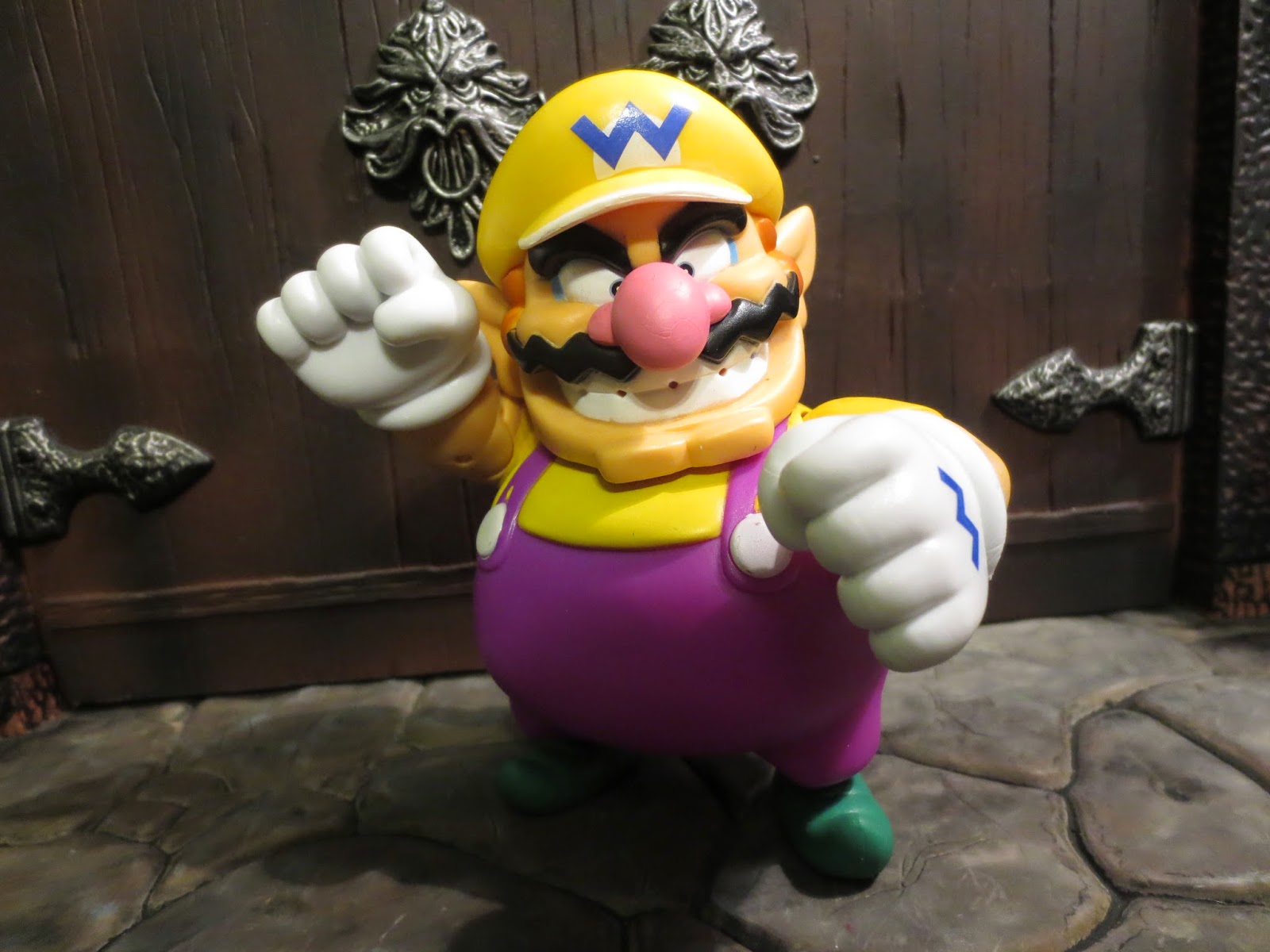 *The articulation is...odd. The figure doesn't seem to be fragile but neither do the joints all feel very solid. The head and left arm are a bit loose while the feet feel overly stiff. I don't know what would have been a better way to approach articulation for Wario but some simple changes might have improved things.

*Having one open hand to grasp the included coin would have been fun. Wario's all about the money, you know? 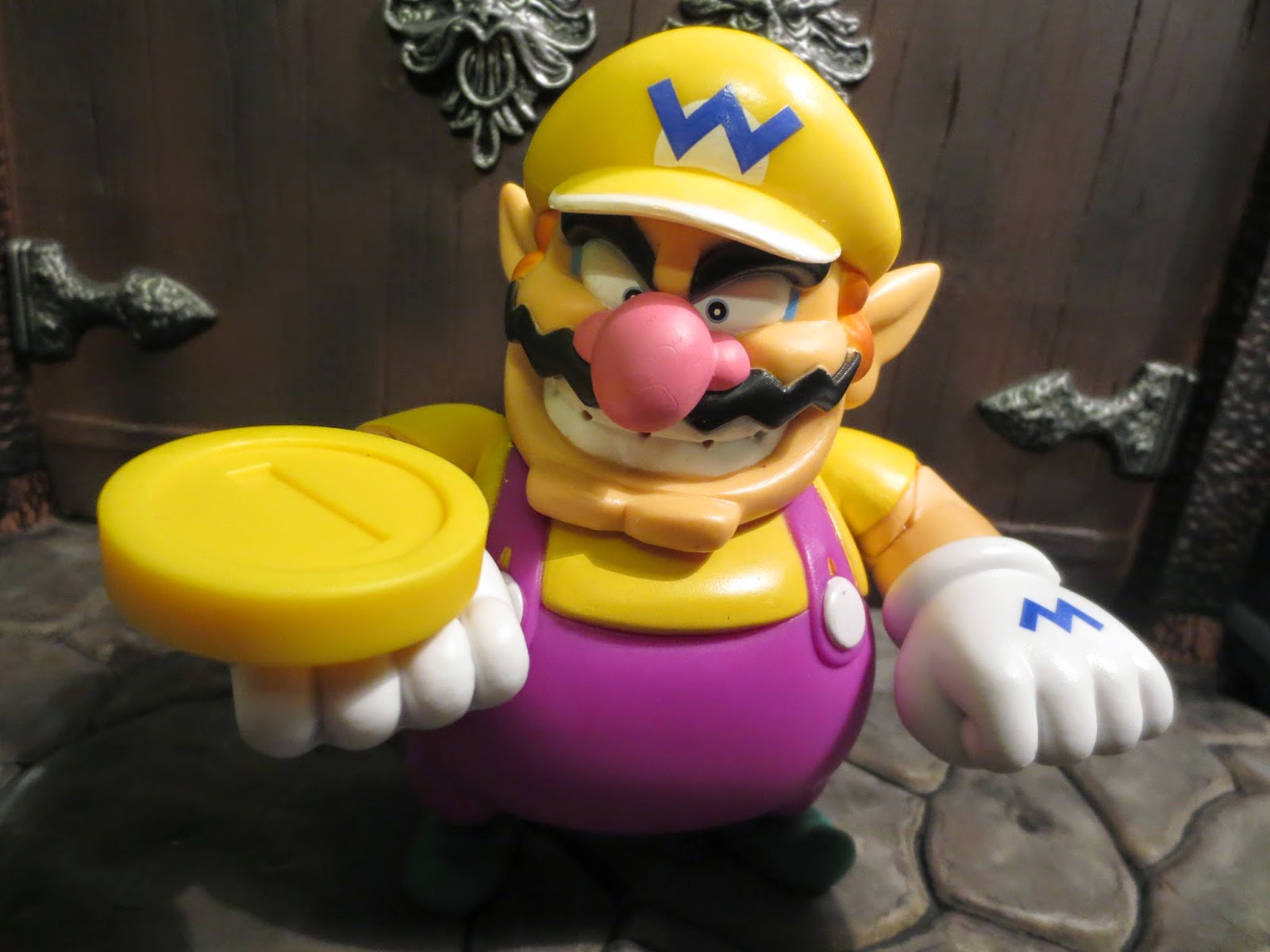 I like Wario. He's not a perfect toy but, for a mass market figure that I paid around $7 or $8 dollars for, he's not bad. My guess is that the target audience for these are kids and hardcore Nintendo fans rather than action figure connoisseurs. Still, there's a lot here to love. The colorful, overly exaggerated sculpt is a fun change of pace from the realism that many collector focused toylines strive for and that's always a welcome change. Had I been a 7 or 8 year old and found these on the shelves I would have eaten them up. As it stands, I'm giving Wario a Good and a 1/2. He's worth looking into if you're a huge Nintendo fan and interested in seeing what this line could offer down the road. Perhaps Jakks has found it's next big property that will excite Nintendo nerds and collectors for a few years down the road? I'm kind of hoping that's the case.

I haven't reviewed any other Wario toys but I did take a look at some older Legend Of Zelda: Ocarina of Time action figures from 1998. Check them out:


The Legend of Zelda: The Ocarina of Time by Nintendo: