Action Figure Review: Spawn of Cthulhu from Legends of Cthulhu by Warpo 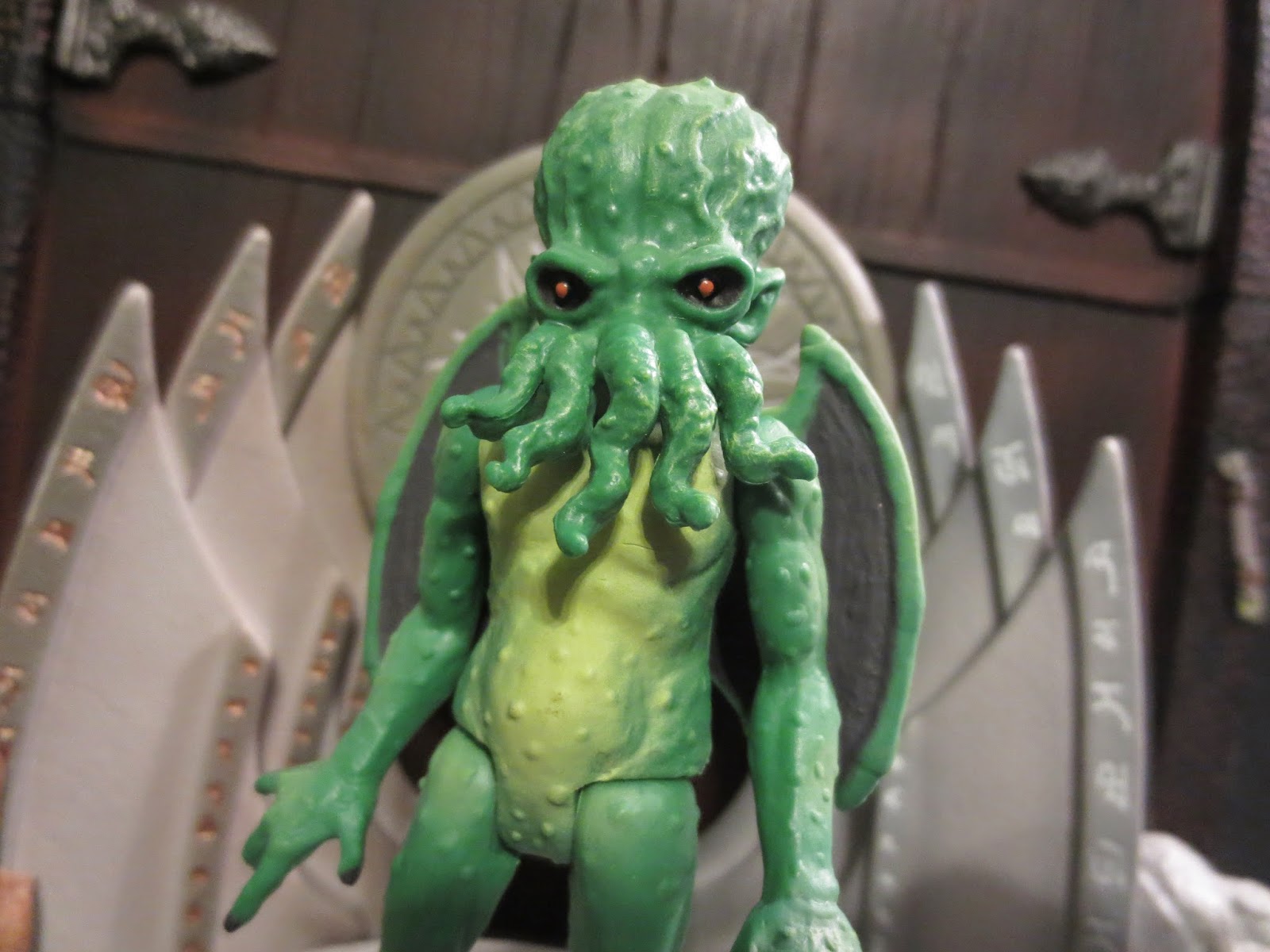 After reviewing both the Cultist and the Kickstarter exclusive High Priest, it's finally time to give the main man a once over. Well, it turns out that this isn't actually Cthulhu; it's a Spawn of Cthulhu. An over sized Cthulhu was a stretch goal for the Kickstarter campaign that never came to fruition then but that will hopefully be available at some point in the future. For now though, you've got one of Cthulhu's youngins to look after. Or just a very small Cthulhu, if you want. Anyways, let's just get on to the toy because he's pretty grand. More of this green monstrosity after the break... 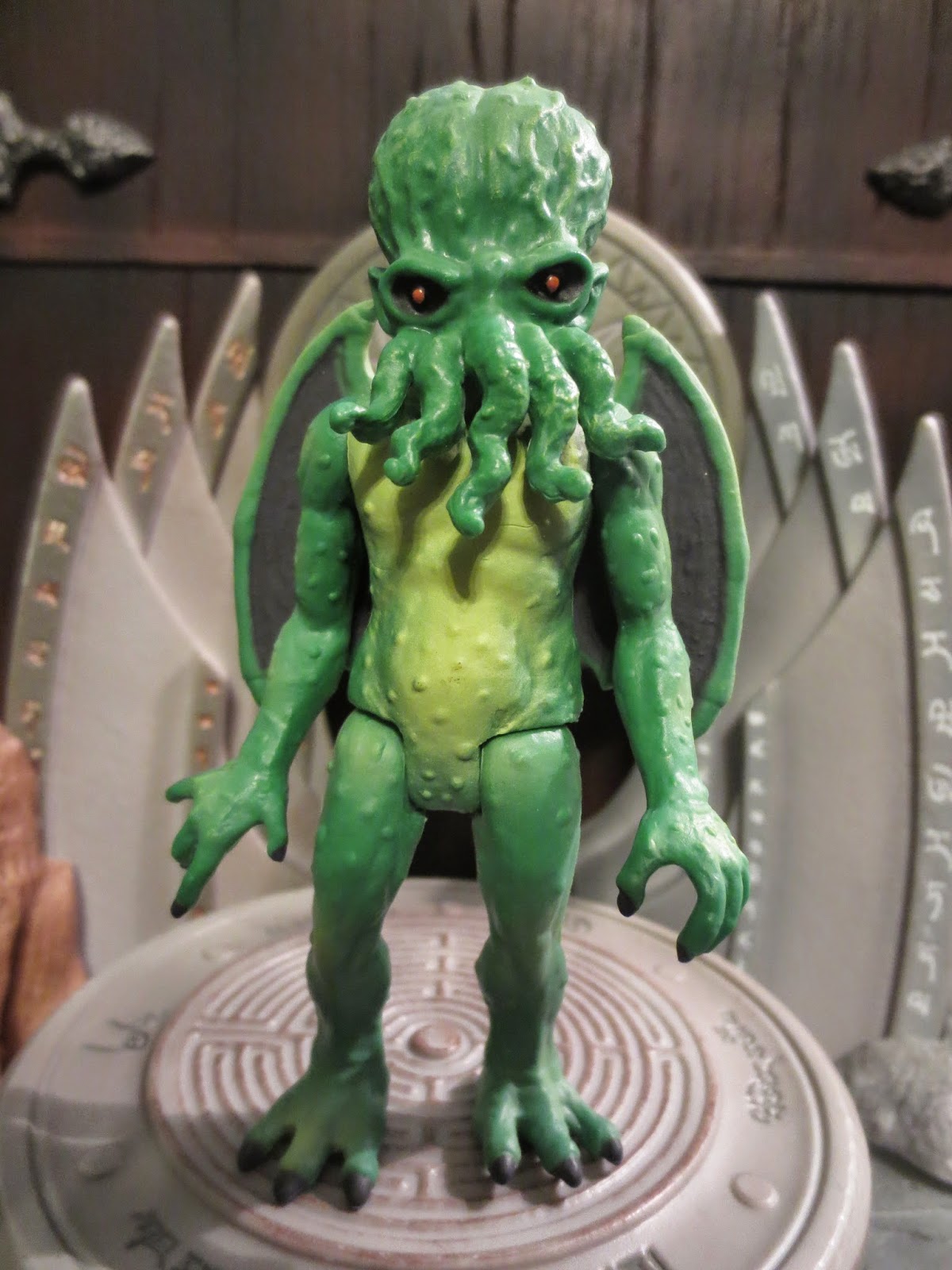 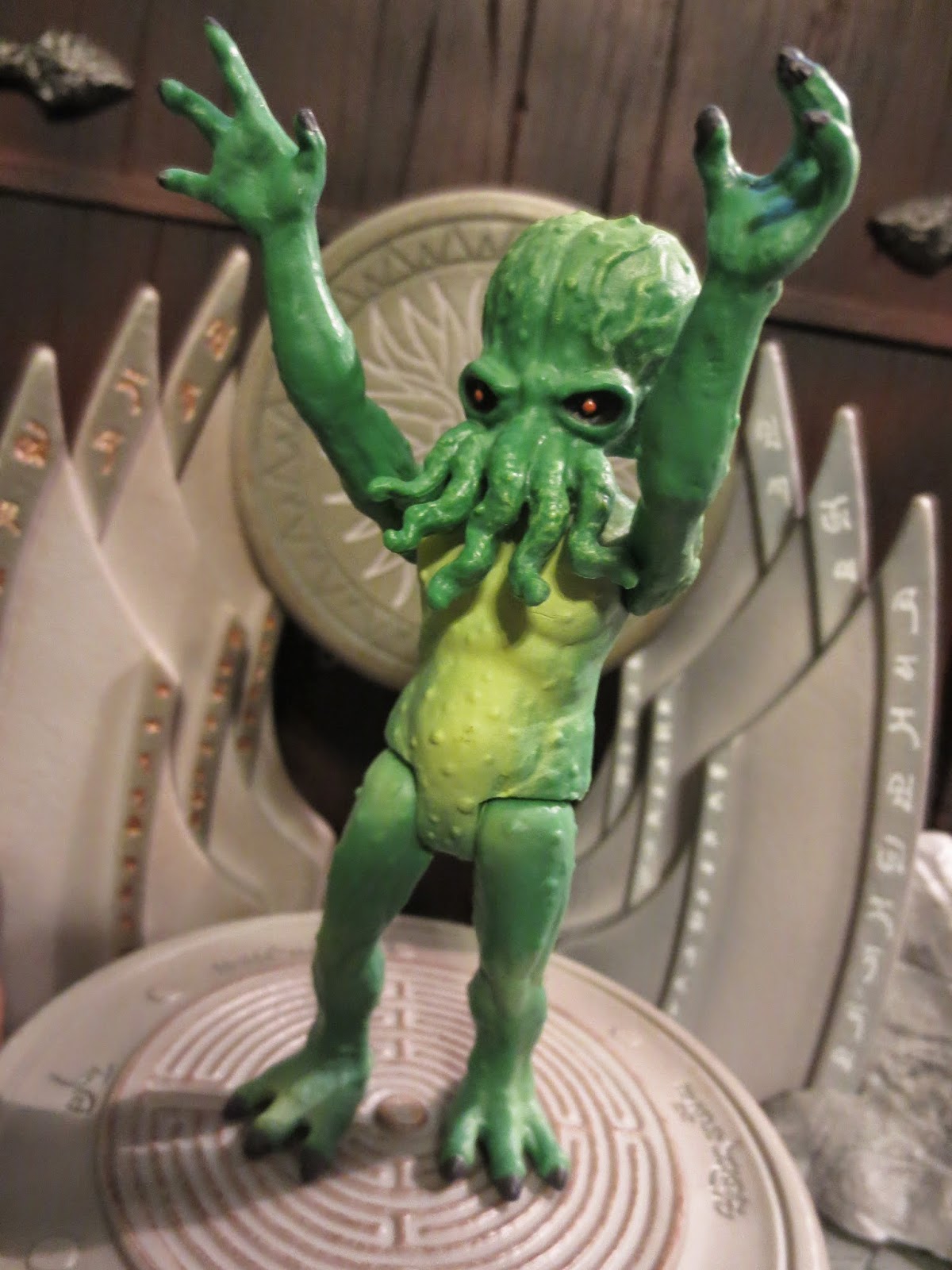 * Everything about this figure feels very solid. He stands easily and feels like a durable toy built for hours of play. For being a small figure (four inches) he has some nice heft to him. The grabbing and grasping hand poses are nice for a figure that doesn't really need to hold anything. 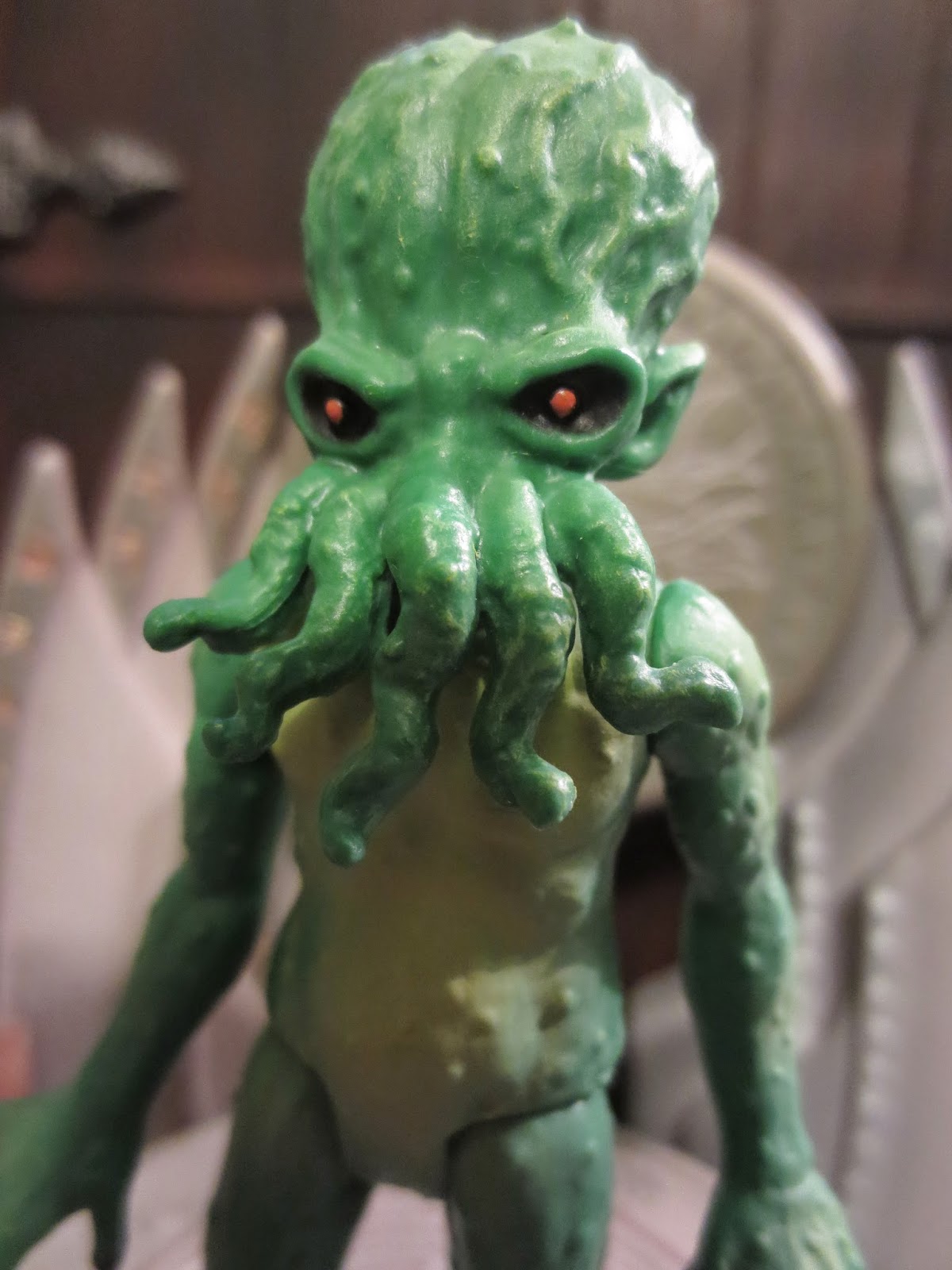 *The sculpt is amazing! I love all of the lumpy, bumpy, veiny details covering this entire sculpt. While this guy looks and feels like a retro toy he feels more like something from Knickerbocker's Lord of the Rings line rather than a Kenner figure. He stands out in a big way from many other vintage styled toys. 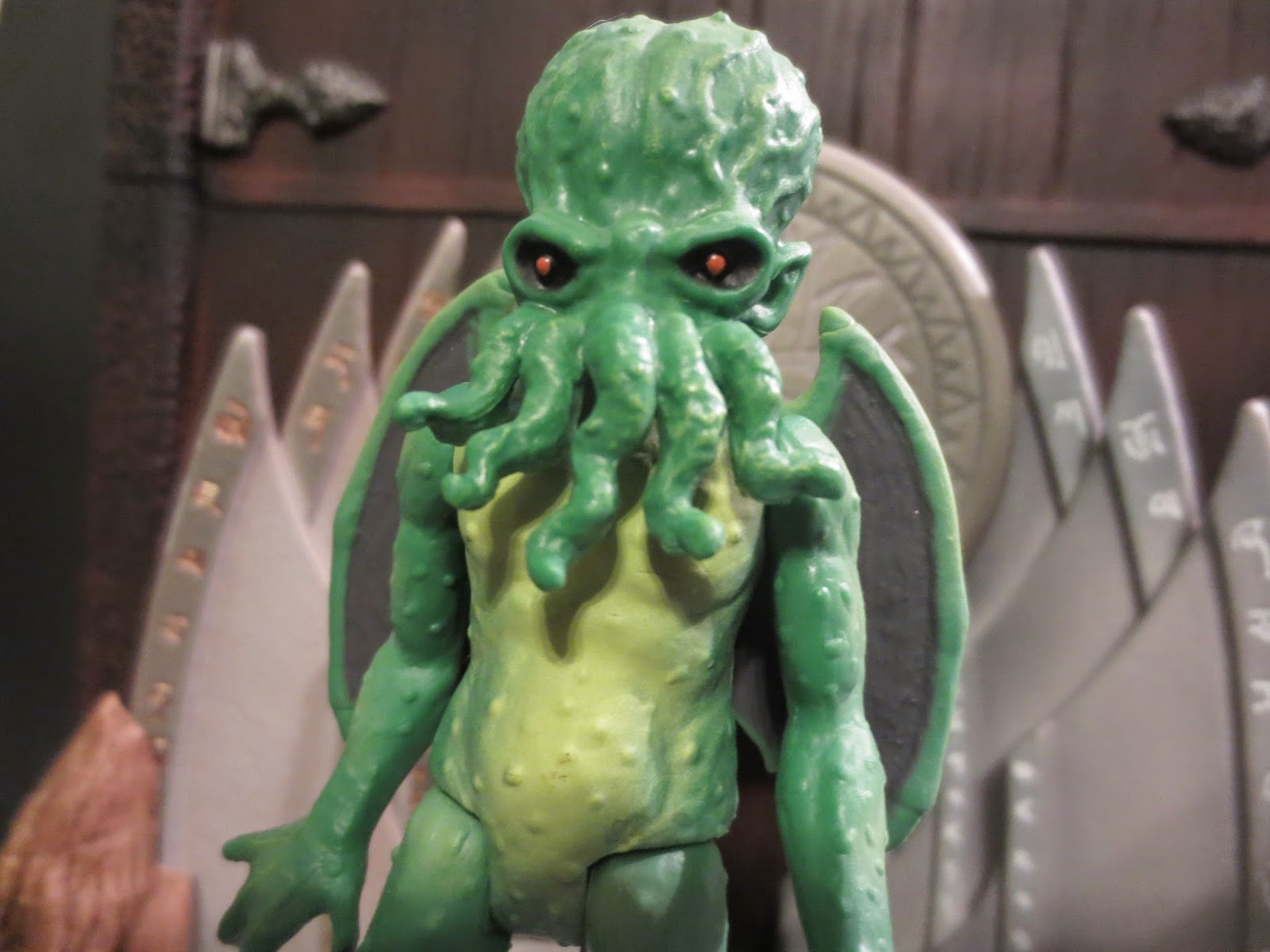 *Warpo did a really nice job on the paint work. The mixture of green and yellow really makes this guy pop out from the other figures in the line. It's a nice look that's pairs with the sculpt to make this guy instantly recognizable as Cthulhu (or a Cthulhu minion). I'm also a sucker for the sunken, beady red eyes. Eerie! 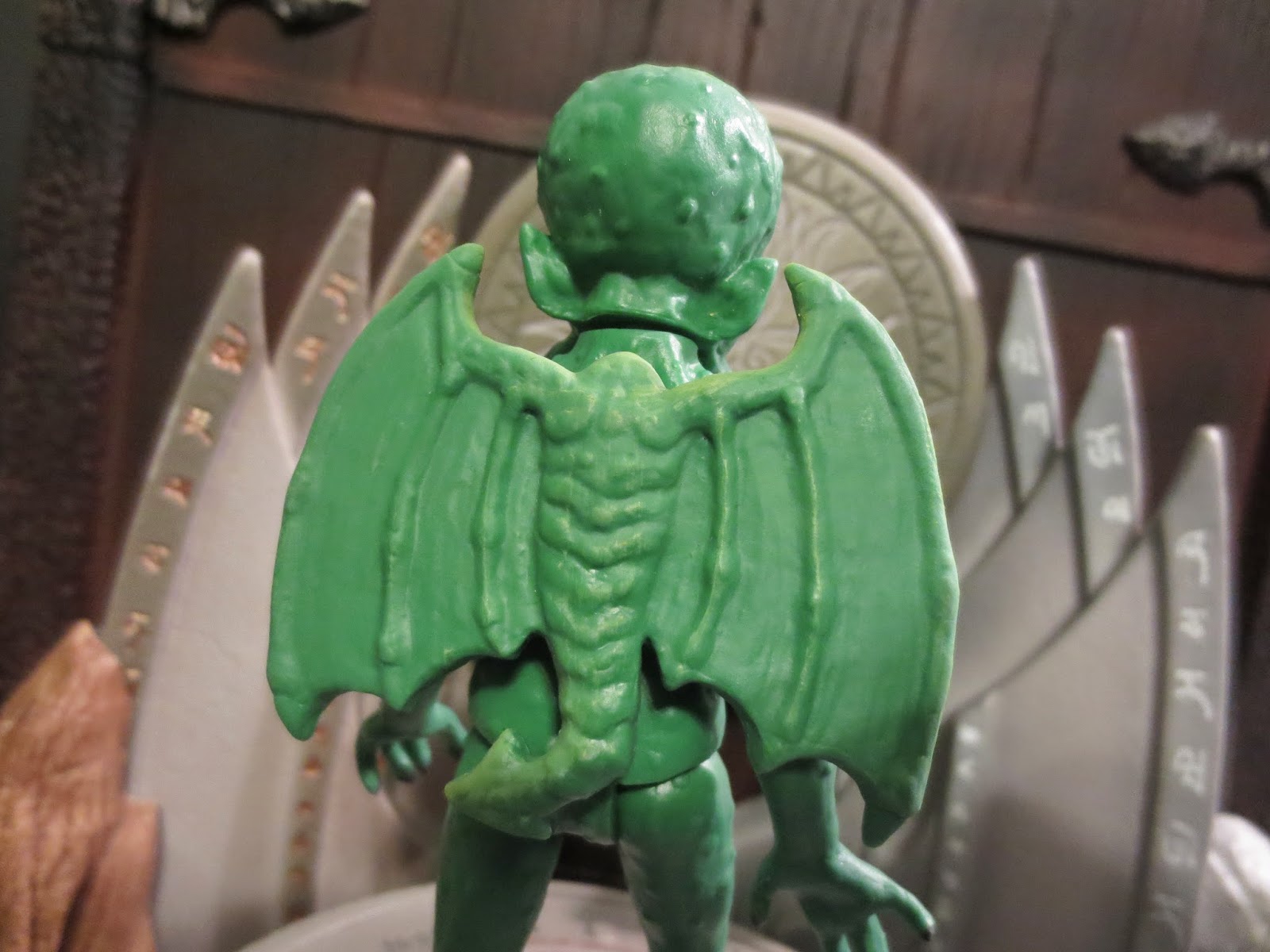 *The removable wings are a nice touch. If you want to army build this gives you the option of winged and wingless Cthulhu minions. The wings easily plug into the back and stay put rather securely. They're made from a rubbery material that is quite fitting for wings. 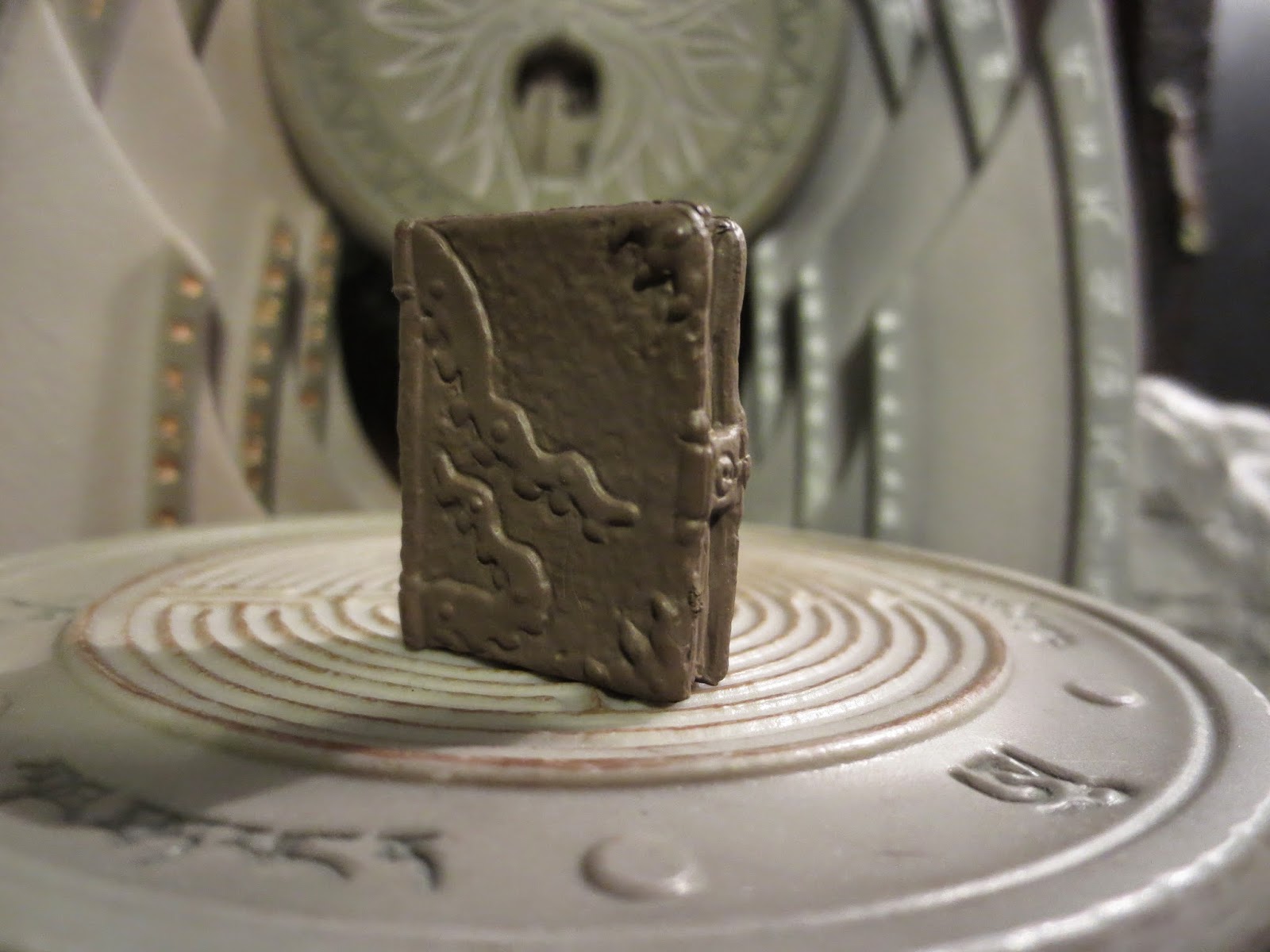 *The Necronomicon, written by the Mad Arab Abdul Alhazred, is a powerful magic tome filled with information on summoning the Great Old Ones including Cthulhu himself! This is a cool sculpt. It's a fairly nice sized little grimoire that features a latch to keep the book from accidentally opening and some tentacles decorating the cover. This is definitely my favorite accessory in the line! 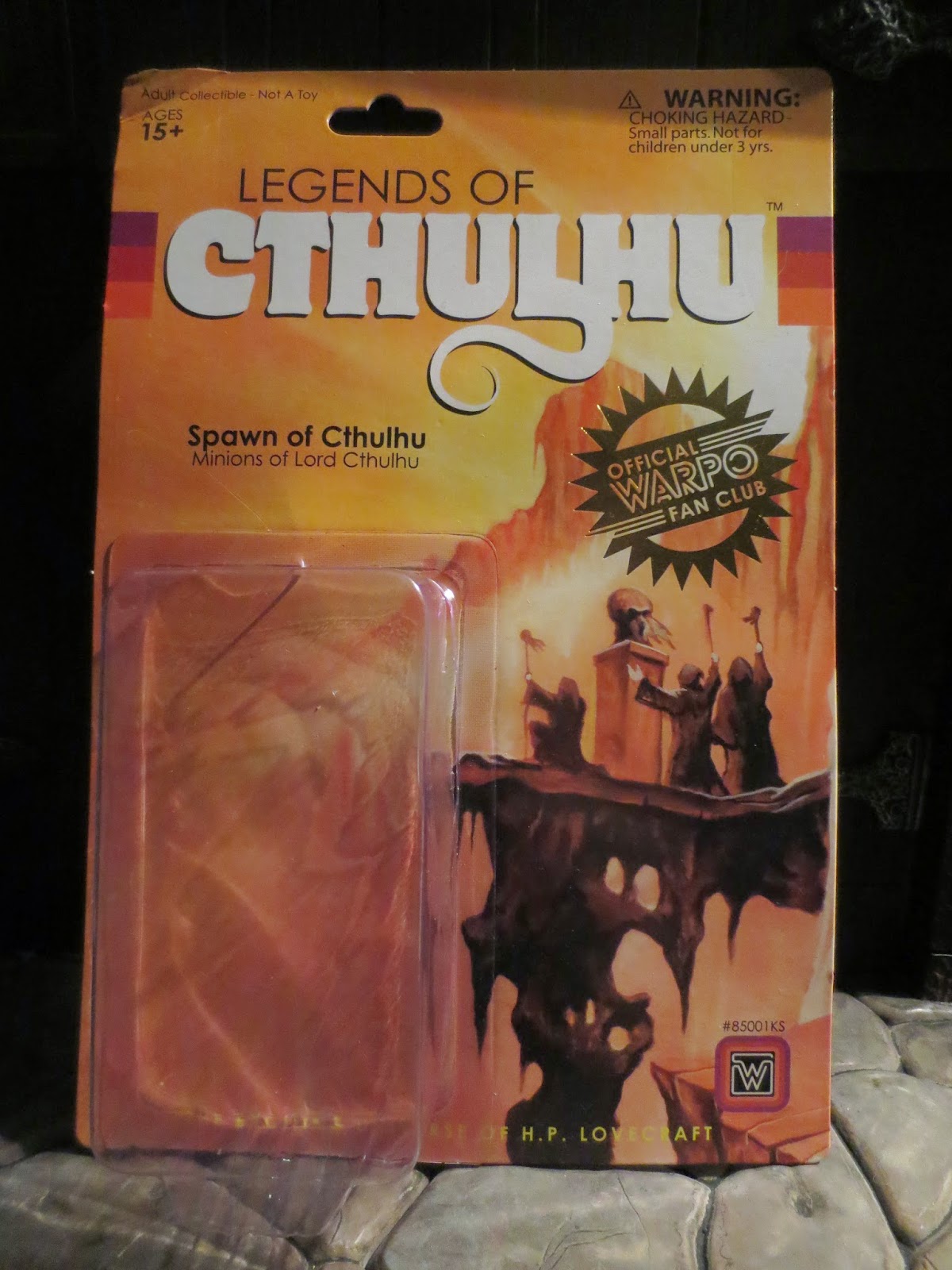 * I've mentioned the beautiful packaging all of my reviews for this line so far, but I haven't shown it yet, so here it is! It's rather lovely front and back. 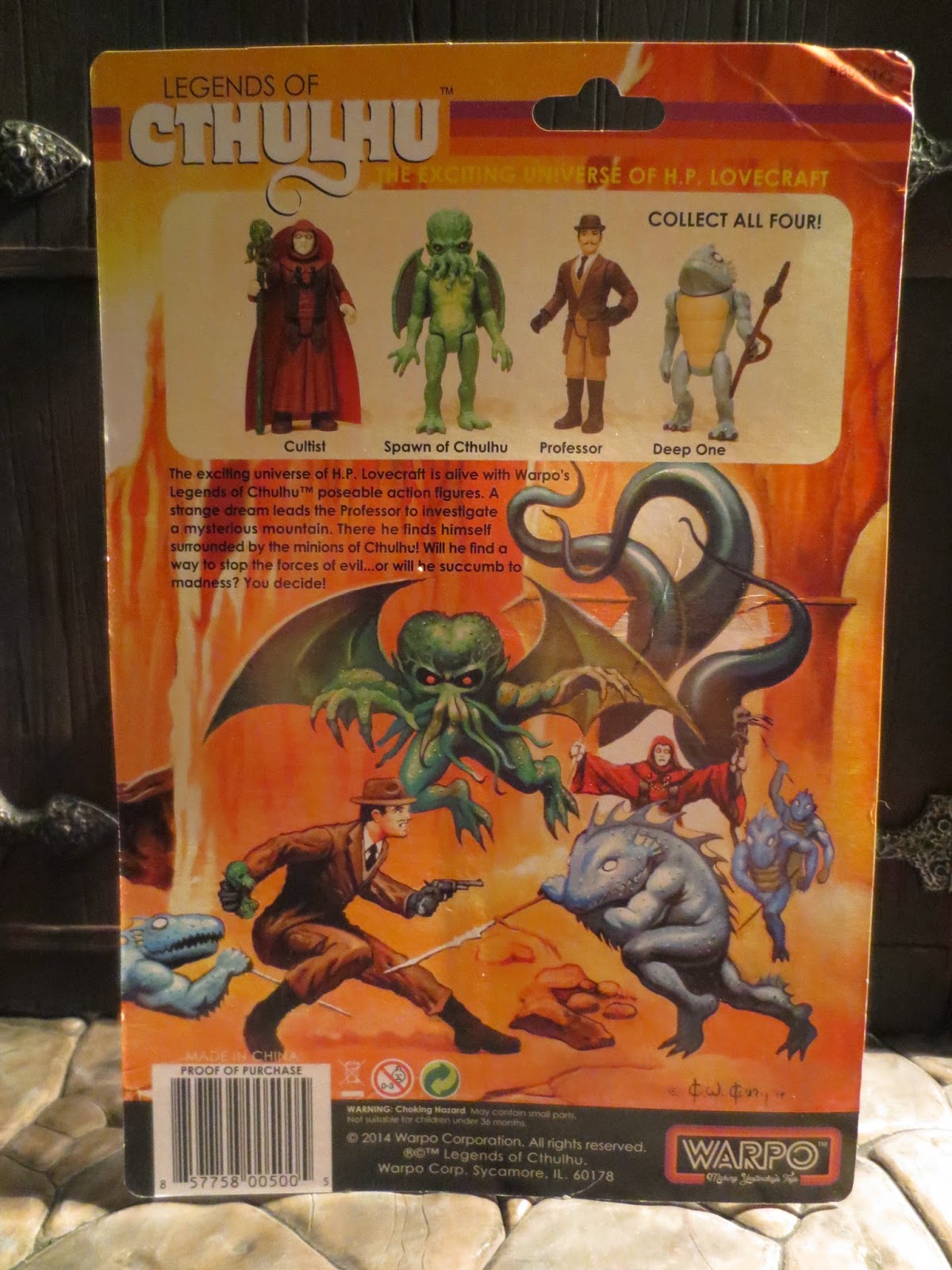 * I have none. This is an extraordinarily executed figure. Unless you just don't like this style of action figure I can't think of anything that I thought should have been better. 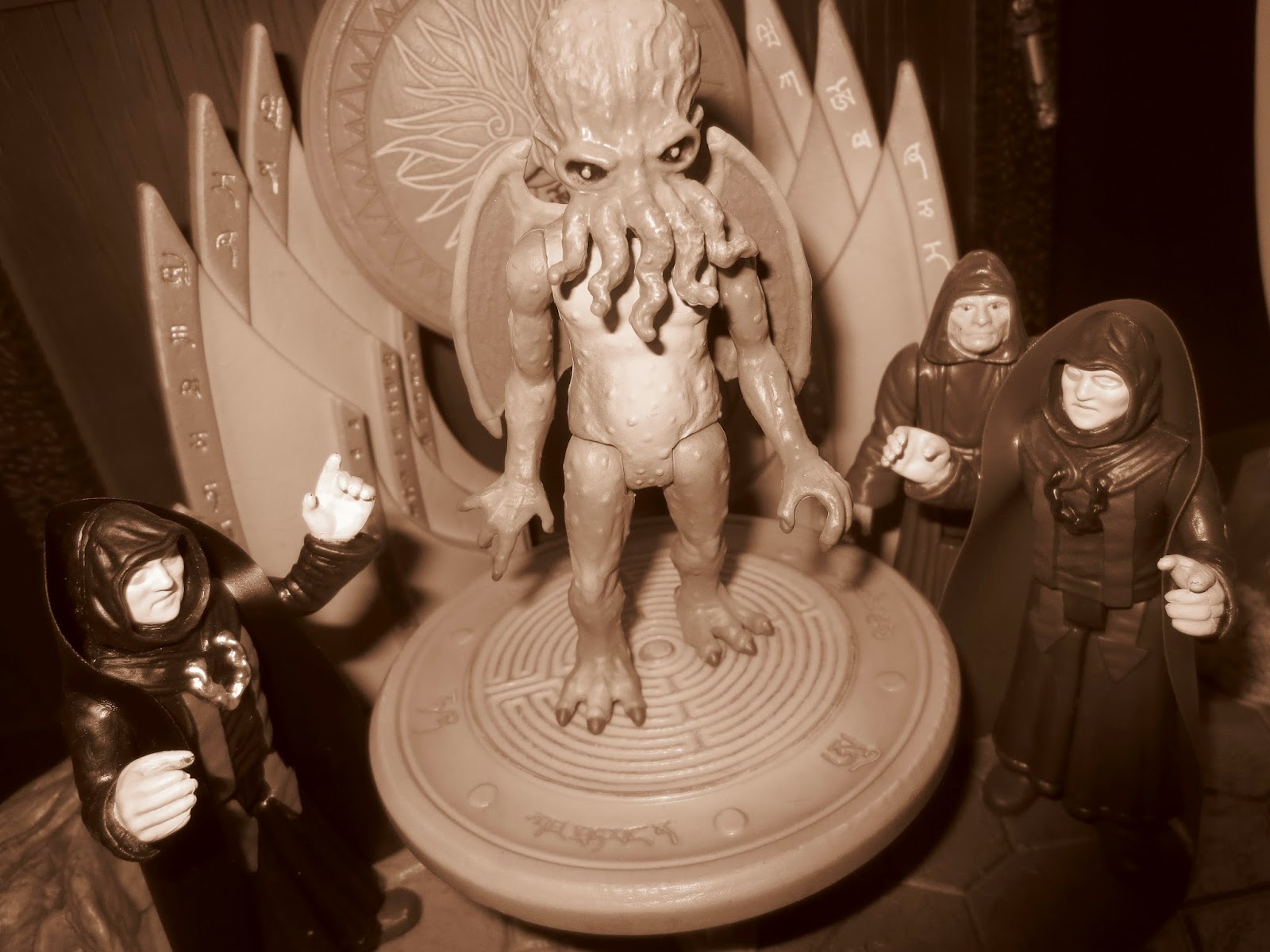 Seeing as I have no complaints about this figure I'm quite content with giving him an Epic rating. He's quite fun and rather incredible. While I hope to own the oversized Cthulhu that Warpo has teased a few times since the Kickstarter campaign originally launched, this Cthulhu spawn is a great Cthulhu figure on it's own. It's just so fun and creepy that I don't see how anyone couldn't love it. You know, unless they grow anxious at the though of slowly losing their sanity... 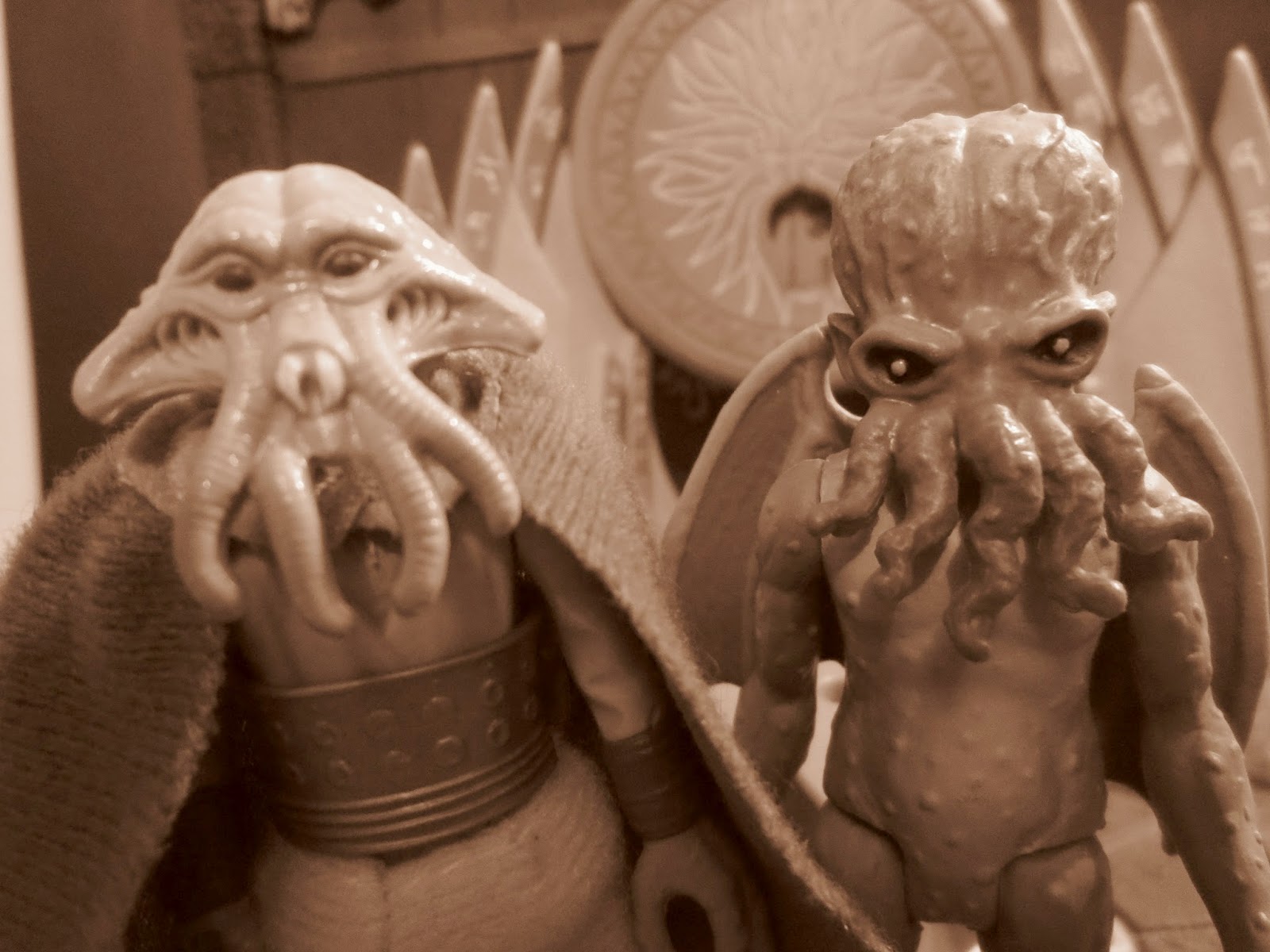 I've reviewed two other figures from this line so far: The Cultist and the High Priest!


I'll be reviewing Conjured Cthulhu, Professor, and Deep One in the next few days, so keep checking back! 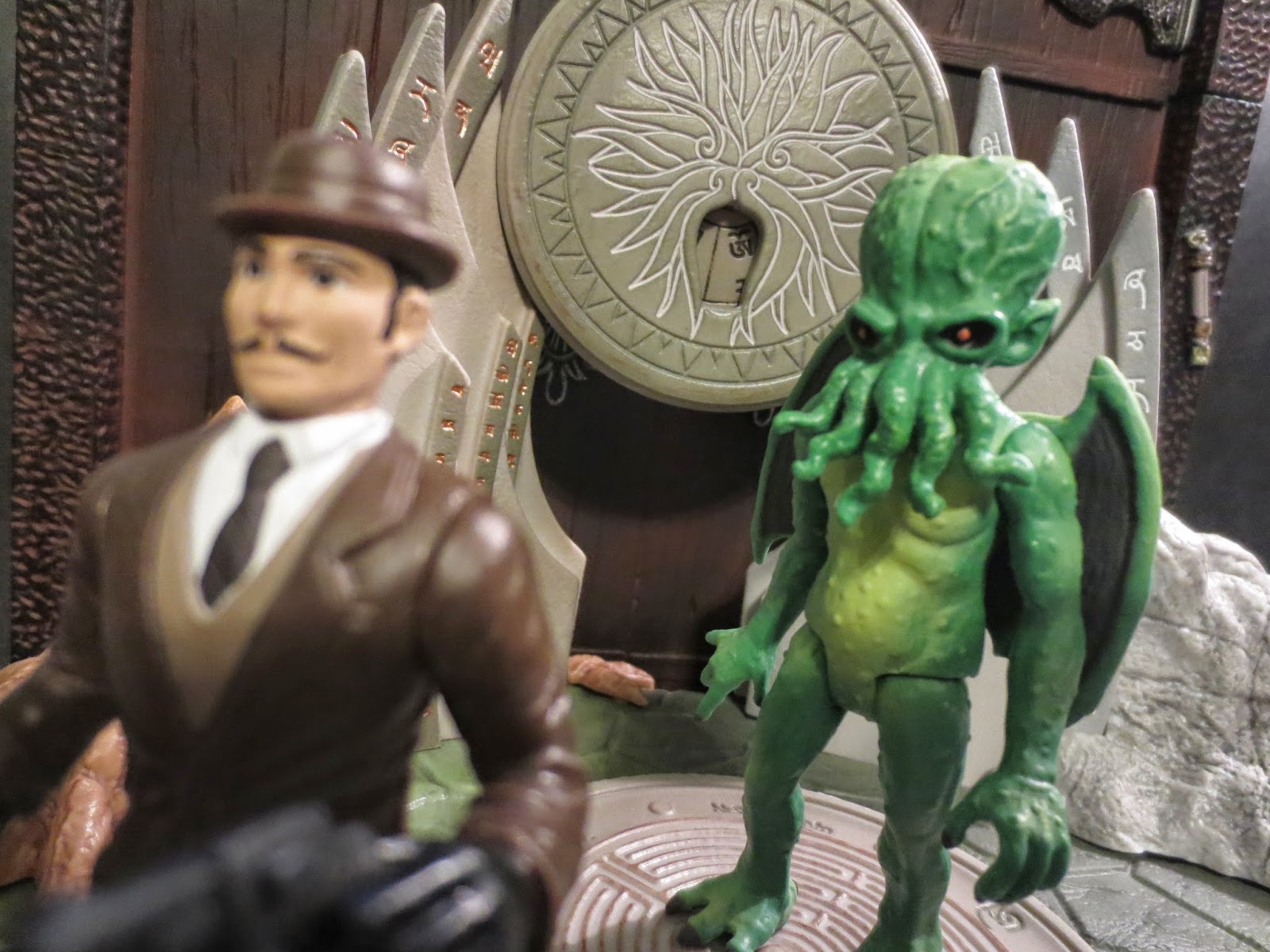