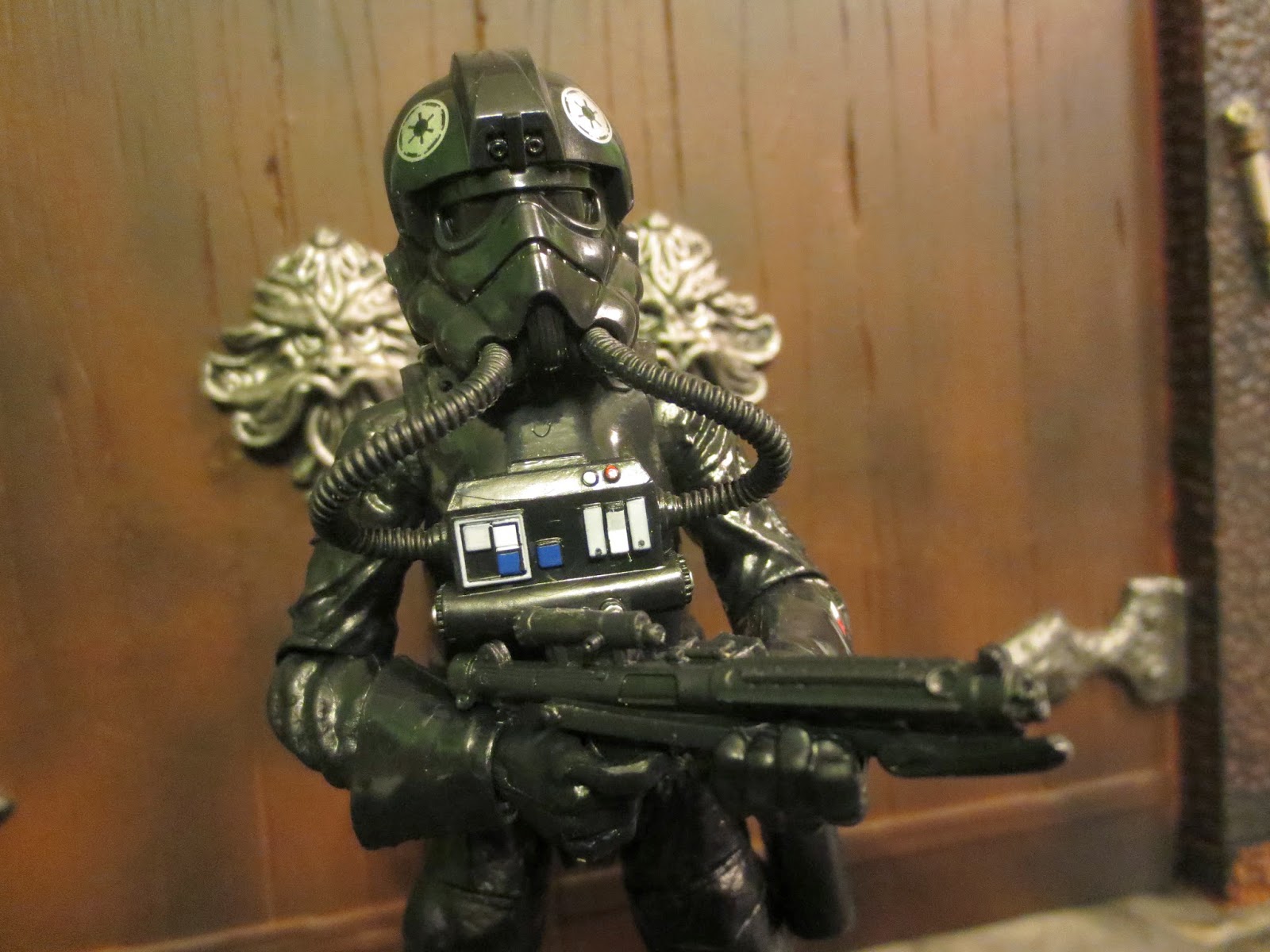 The newest series of Star Wars: The Black Series action figures have been out for a few months now but I finally just found a TIE Pilot at Walgreens. While we're getting closer and closer to the newest wave with Bossk and Han Solo in the Stormtrooper disguise, I figured we had better look over the TIE Pilot. I've always loved the TIE Pilot's costume; in fact, it was one of the few Star Wars figures I owned during my childhood. I've also just watching Star Wars: Rebels which gives the TIE Pilots plenty of screen time. I'm a sucker for any troopers or clones in the Black Series as they just usually turn out better than anything else in the line. Looking at the armor of the figure and the design of the costume, this is clearly a TIE Pilot from A New Hope (the Return of the Jedi designs are different). I've enjoyed looking at the incredibly detailed 501st Legion costume references in order to check the accuracy of these figures and I'll do so again here as I'm reviewing the TIE Pilot. Ready to go over this guy with a fine toothed comb? Then join me after the break... 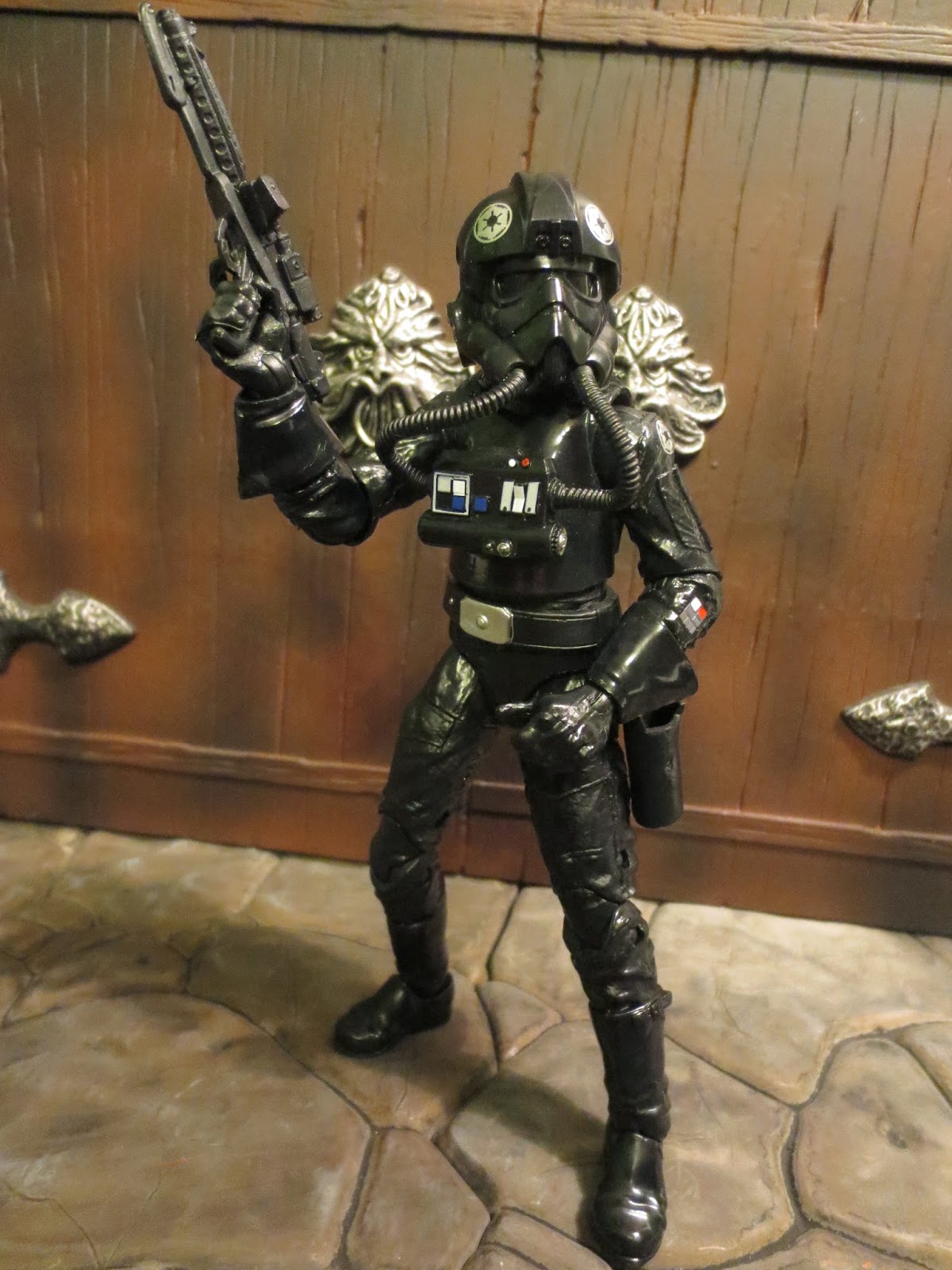 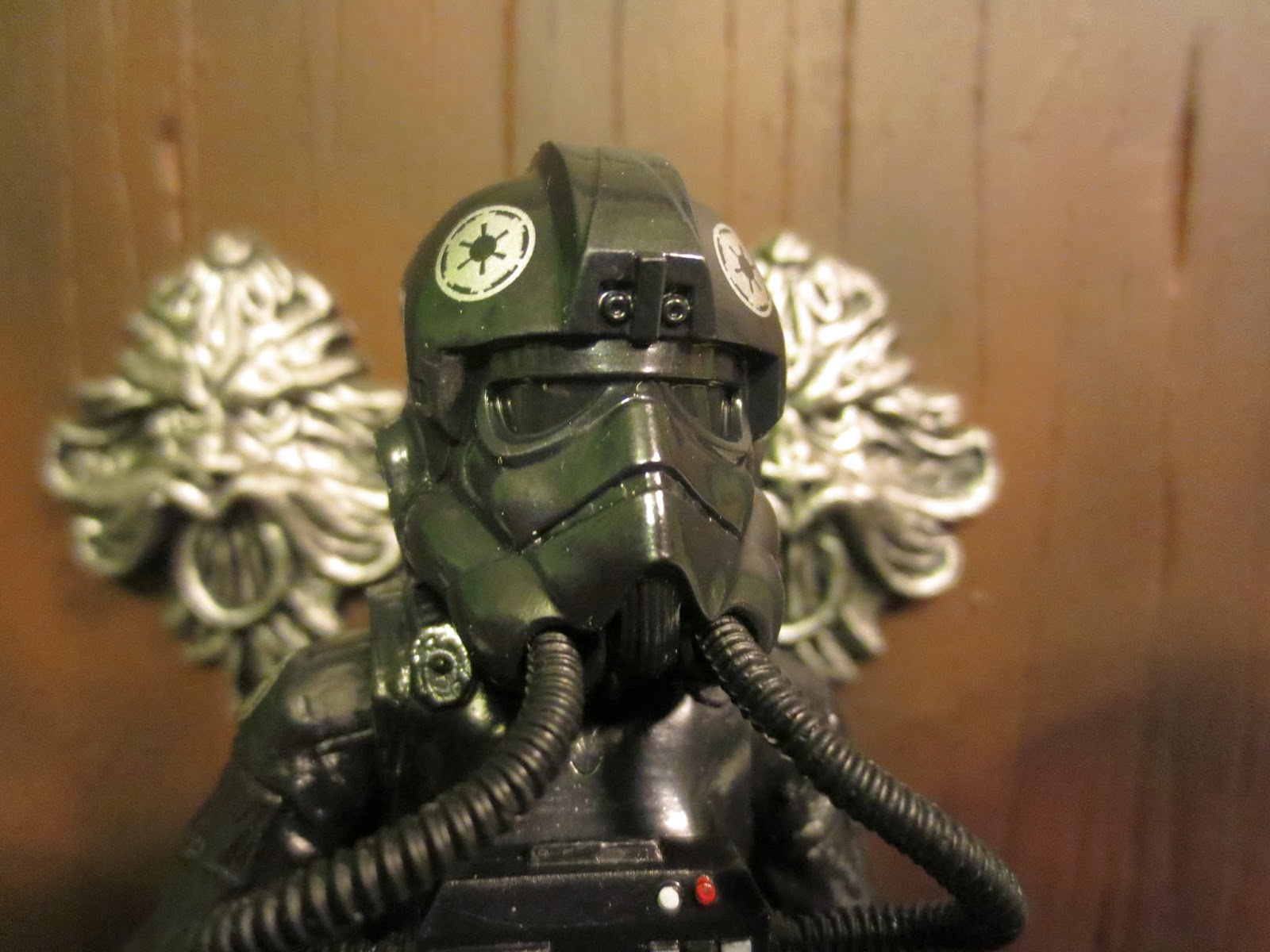 I've always found the TIE Pilot helmets to be the most intimidating of the standard Imperial helmets and that carries over to their representation in the Black Series. The helmet is excellent and captures the larger size and abundance of features well. Everything from the "frown" on the helmet to the Imperial insignia on the sides of the helmet are accounted for. While there are a few different paint designs seen in the films, Hasbro wisely went with the option we're all the most familiar with. 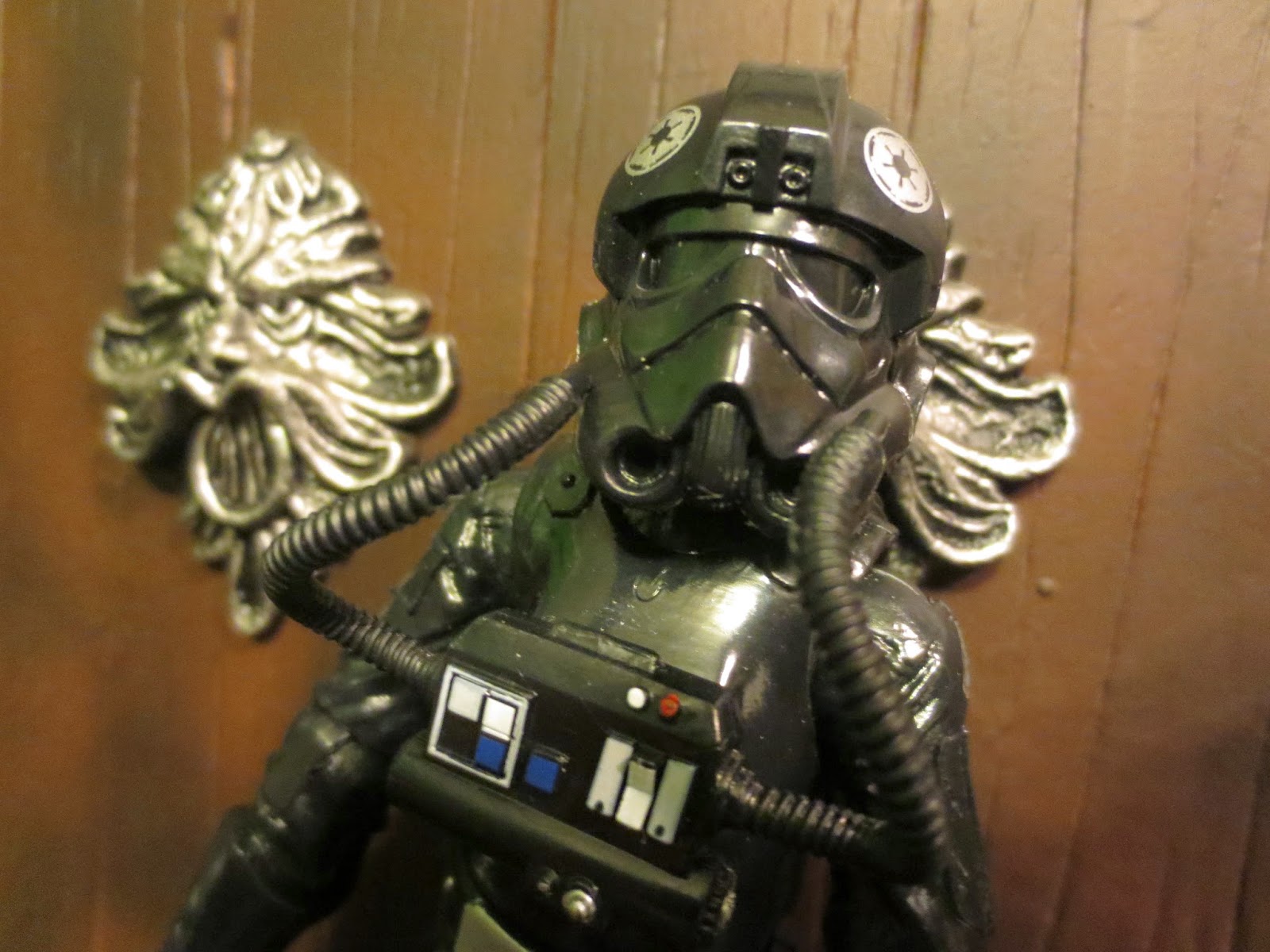 These are simple black plastic hoses; what more can I say? You'll be surprised, actually, as these could have been a problematic design element for this figure but Hasbro managed to do an excellent job in executing these. One end of the hoses are permanently attached to the chestbox while the other in simply slips into the ports on the helmet. These fit nice rather snug but if you happen to turn the head too far to the left or right they simply pop out rather than bend or break. Very well thought out, Hasbro. Kudos! 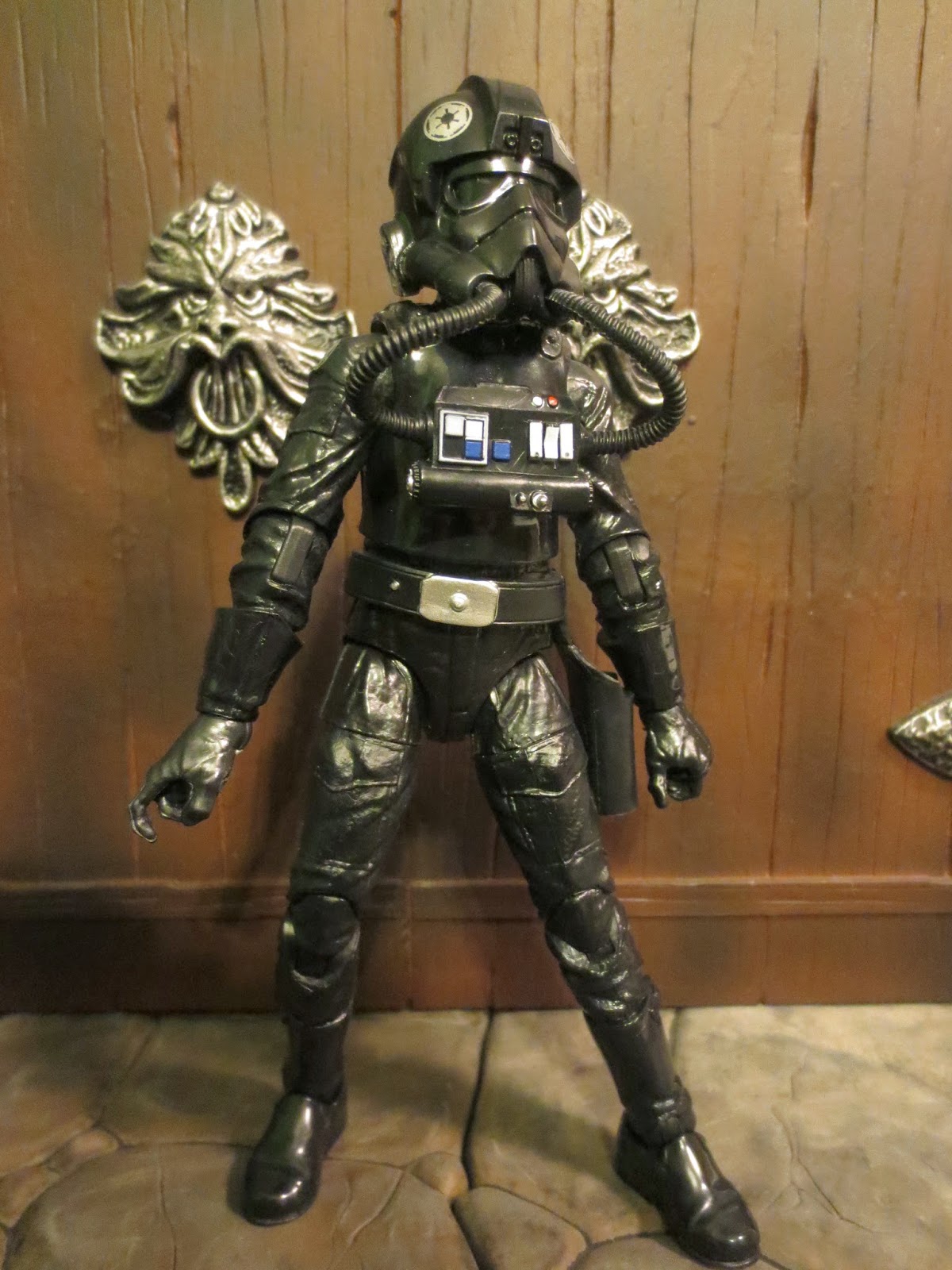 Since this covers the pilot's entire body, this is a great place to talk about the articulation of this figure. It's quite good, as most Star Wars Black figures have been, and feels very sturdy. I'm not sure there are any other action figures today that are as fun to just play around with and pose as these guys. The sculpted detail on the suit is great and gives the suit plenty folds and wrinkles. It also appears to be quite accurate with cargo pockets on the legs, a cargo pocket on the right bicep, and a compad pocket on the left bicep. Yup, the pockets on the left and right arms are actually different to match the film's costume. The Imperial Cog emblems are also neat and clean. Everything looks great! 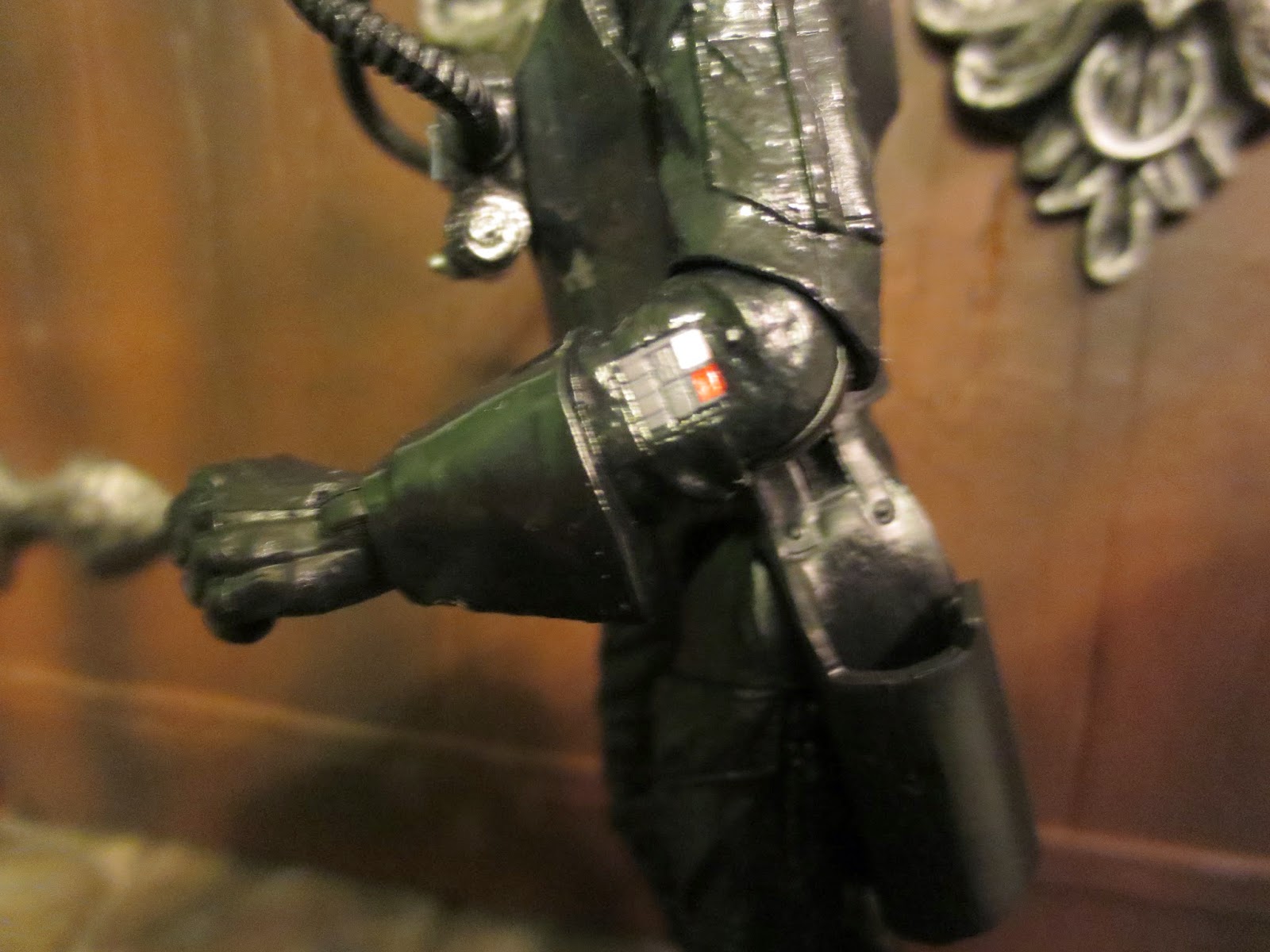 This is a simple sculpted part of the pilot's left forearm. It's pretty small and not entirely accurate, but it's there. The paint is pretty clean, too. Honestly, I'm not sure that this could have been accomplished much better in this scale. 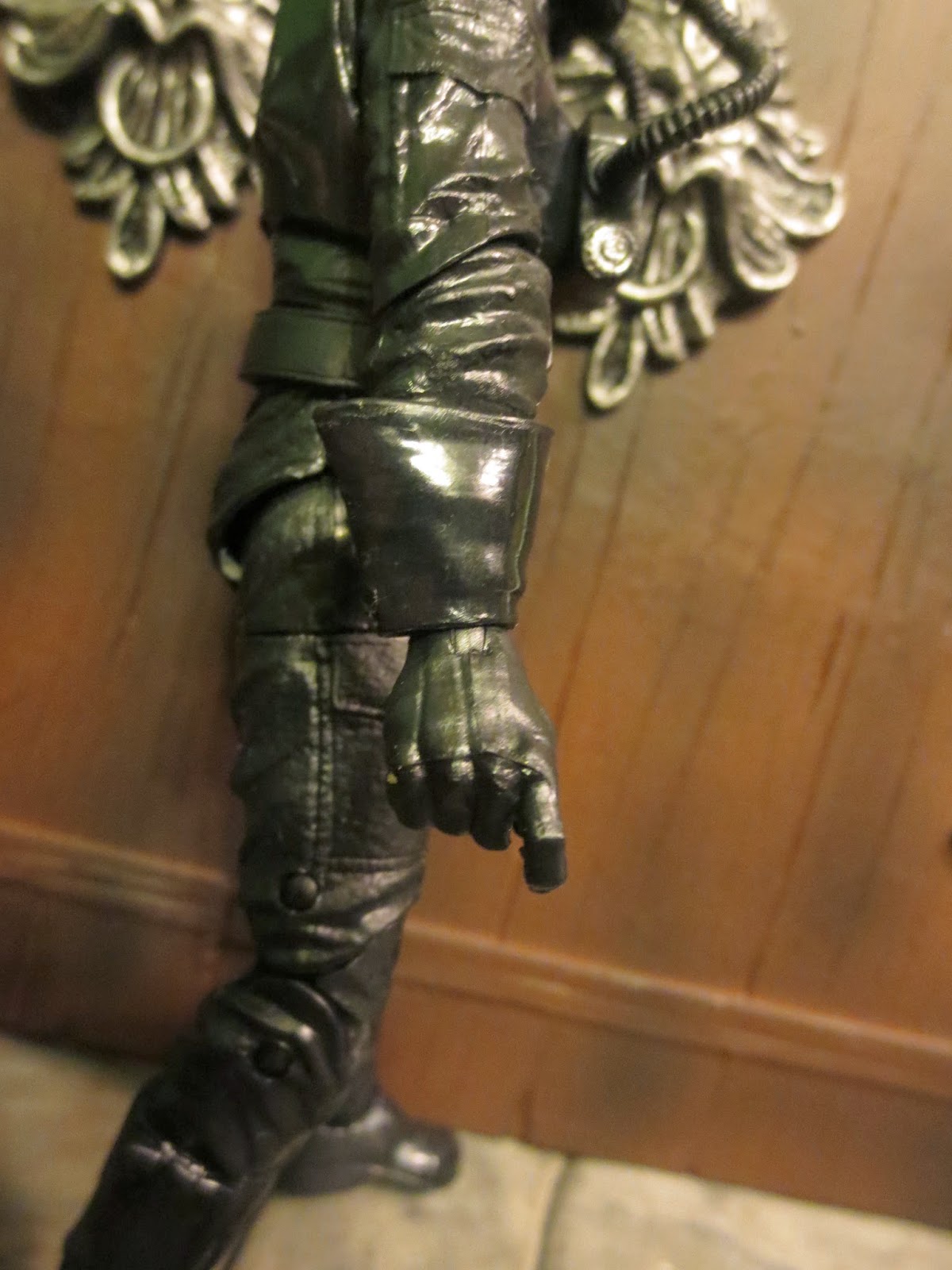 These are simple black leather gloves that flair-out on the forearms. No problems here. The right hand is sculpted in a pistol grip while the left is a standard c-grip. I really want to see this guy in a to-scale TIE Fighter, although I don't have high hopes for that. 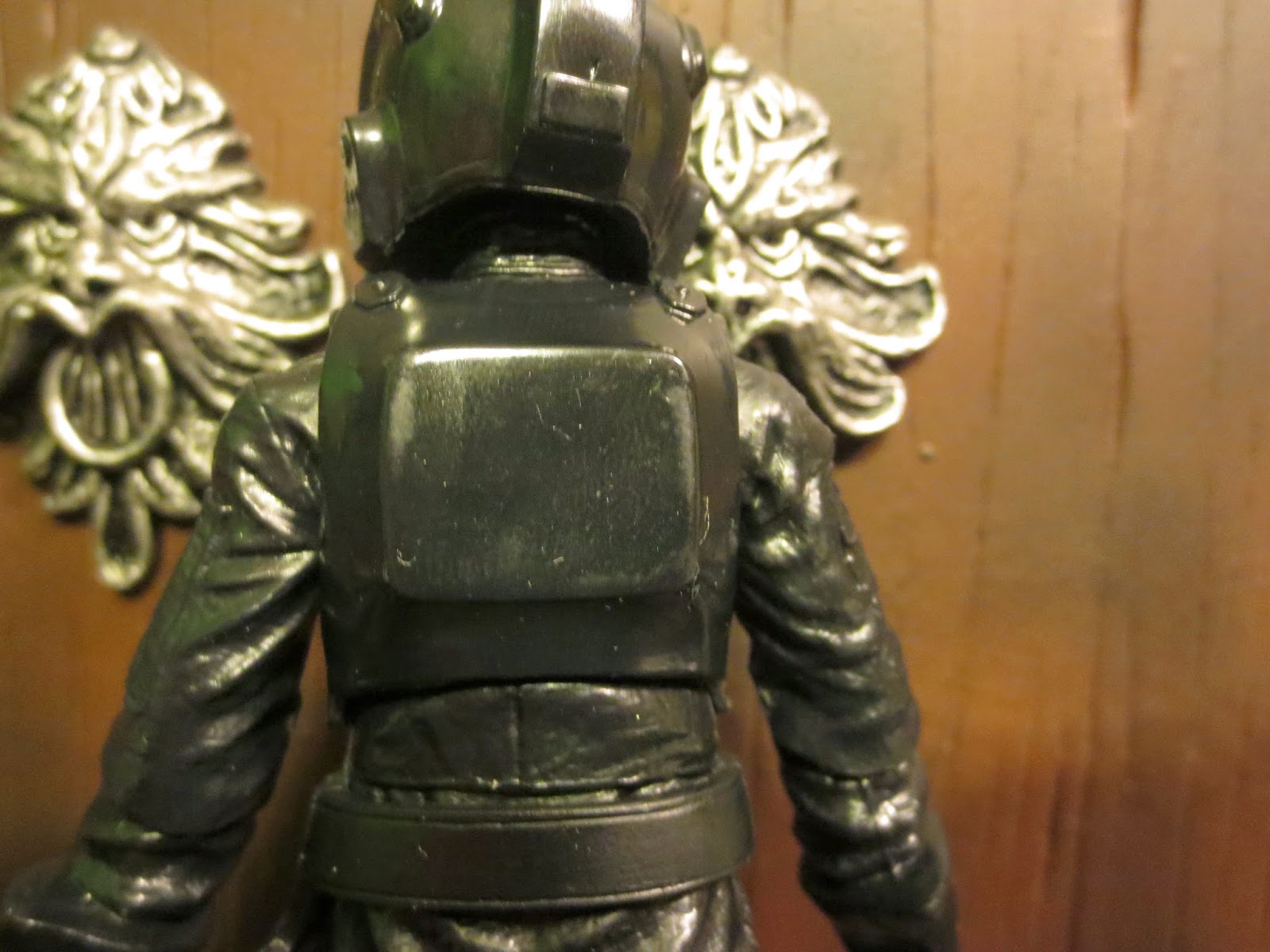 The armor on the TIE Pilot's chest is simply part of the sculpt. It's glossy and helps to add to the Trooper's armored appearance. The shoulder straps are even ribbed and fastened just like on the film costumes. Once again, no problems here! 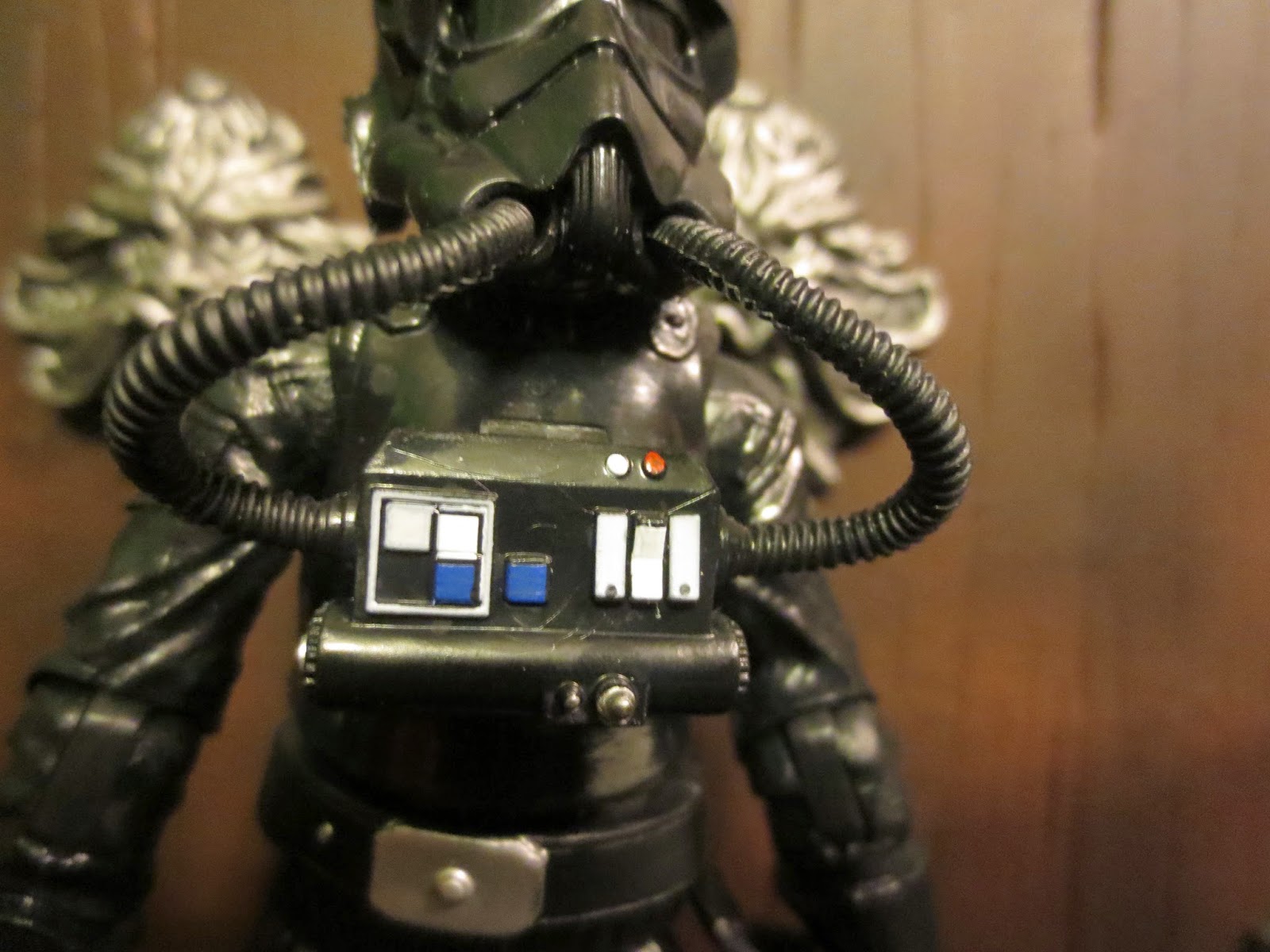 The chestbox features every detail seen on the in-film costumes although the paint work makes a few of the elements look a bit out of line. It's nothing major as looking at this at a glance is rather impressive but comparing it to film stills or costuming guides will point out the areas that are a wee bit different. Still, wow! This looks really good. 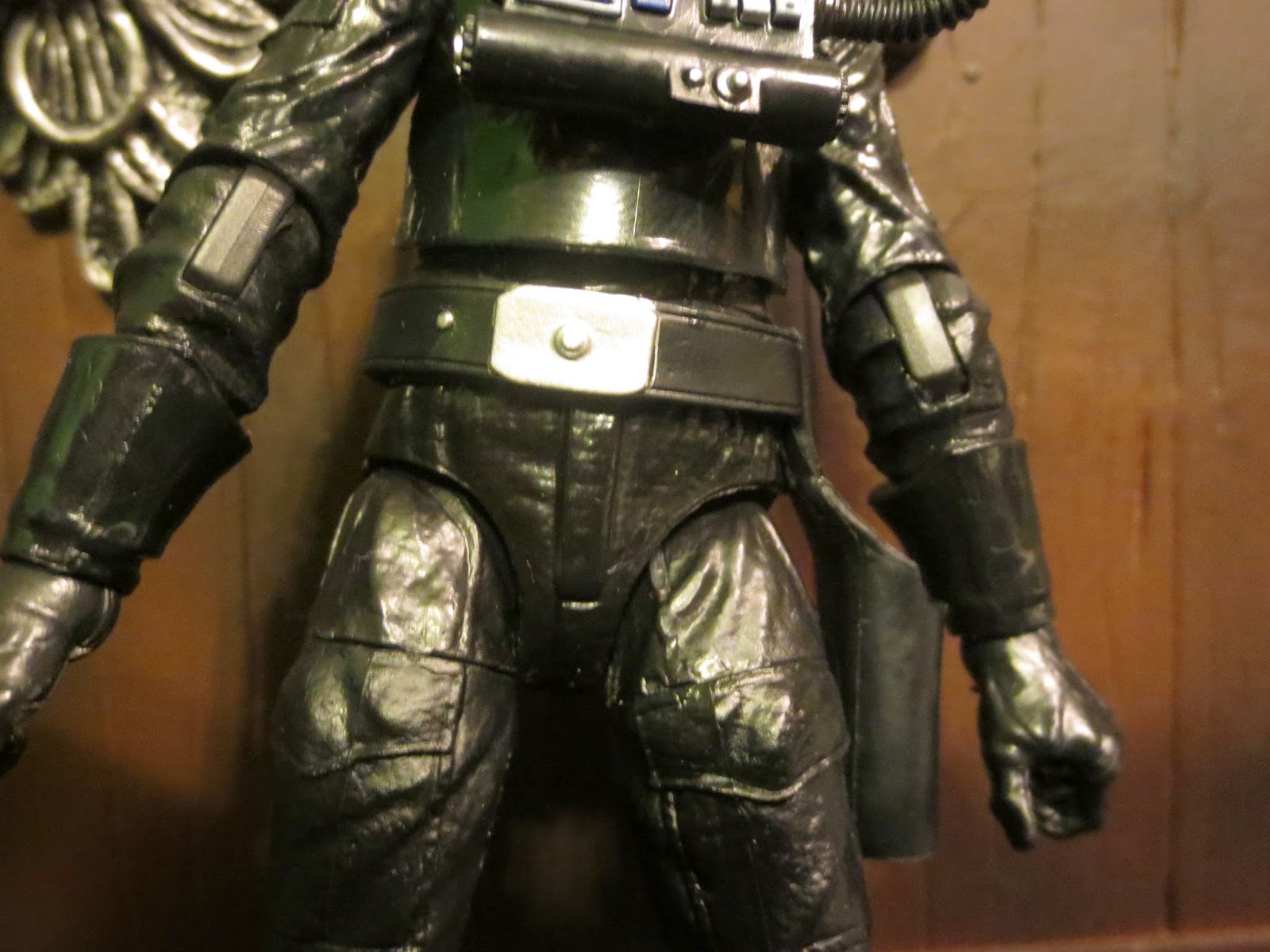 The belt is pretty basic although it does have the visible rivet on the belt and the Imperial Code Disk on the buckle. It's a separate piece that floats over the main torso. The TIE Pilot also has a simple, functional  black holster attached to the belt to hold his E-11 Blaster. I'm always happy when a figure can store its accessories like this. 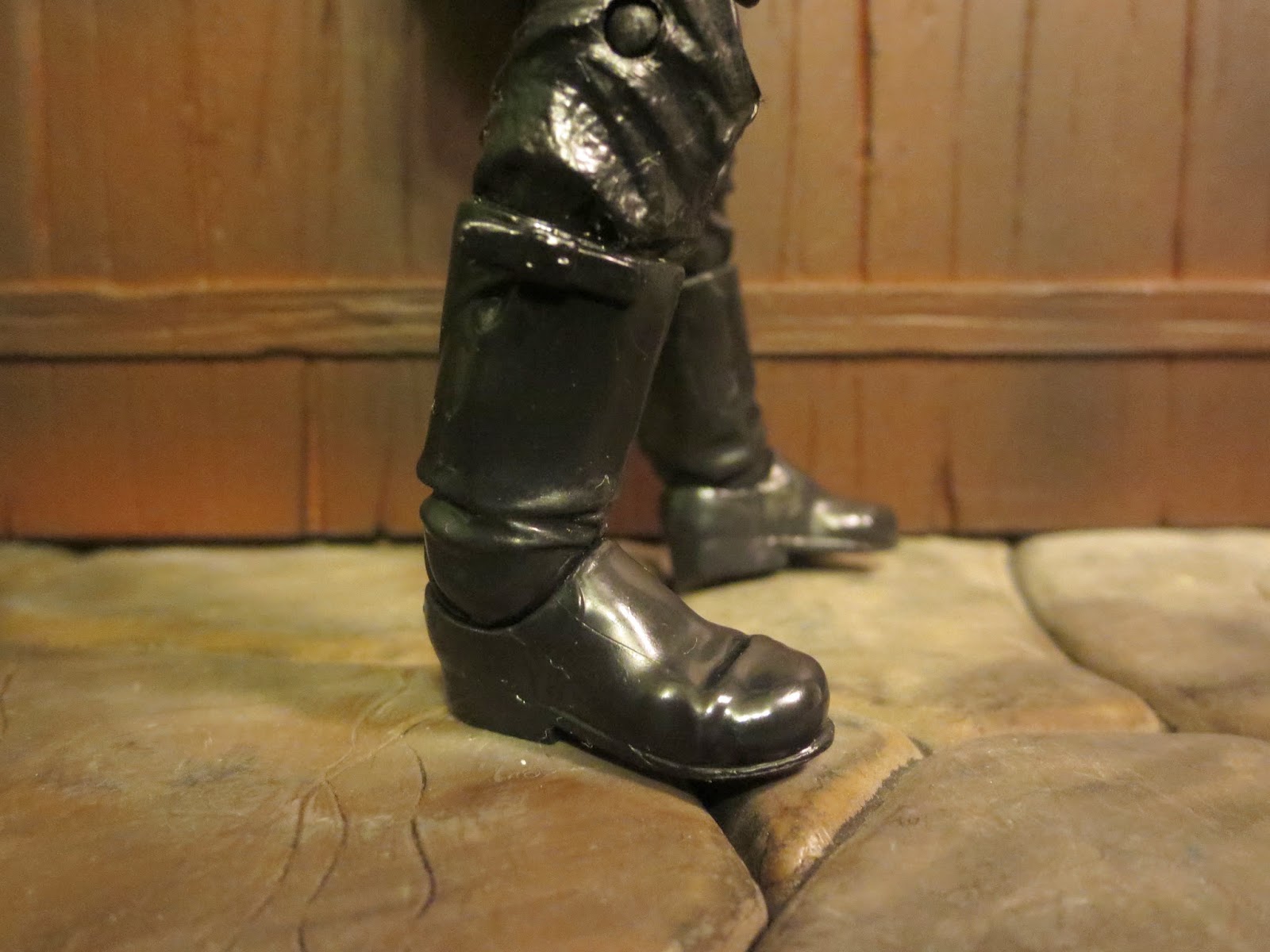 The TIE Pilot boots in the films were knobelbechers, better known as German jack boots. They're really simple, only featuring a strap for tightening at the top, but they're nice and glossy. Star Wars Black has pretty much the best ankle articulation of any toyline out there that I can think of, so it's nice to see that tradition continue with the TIE Pilot. 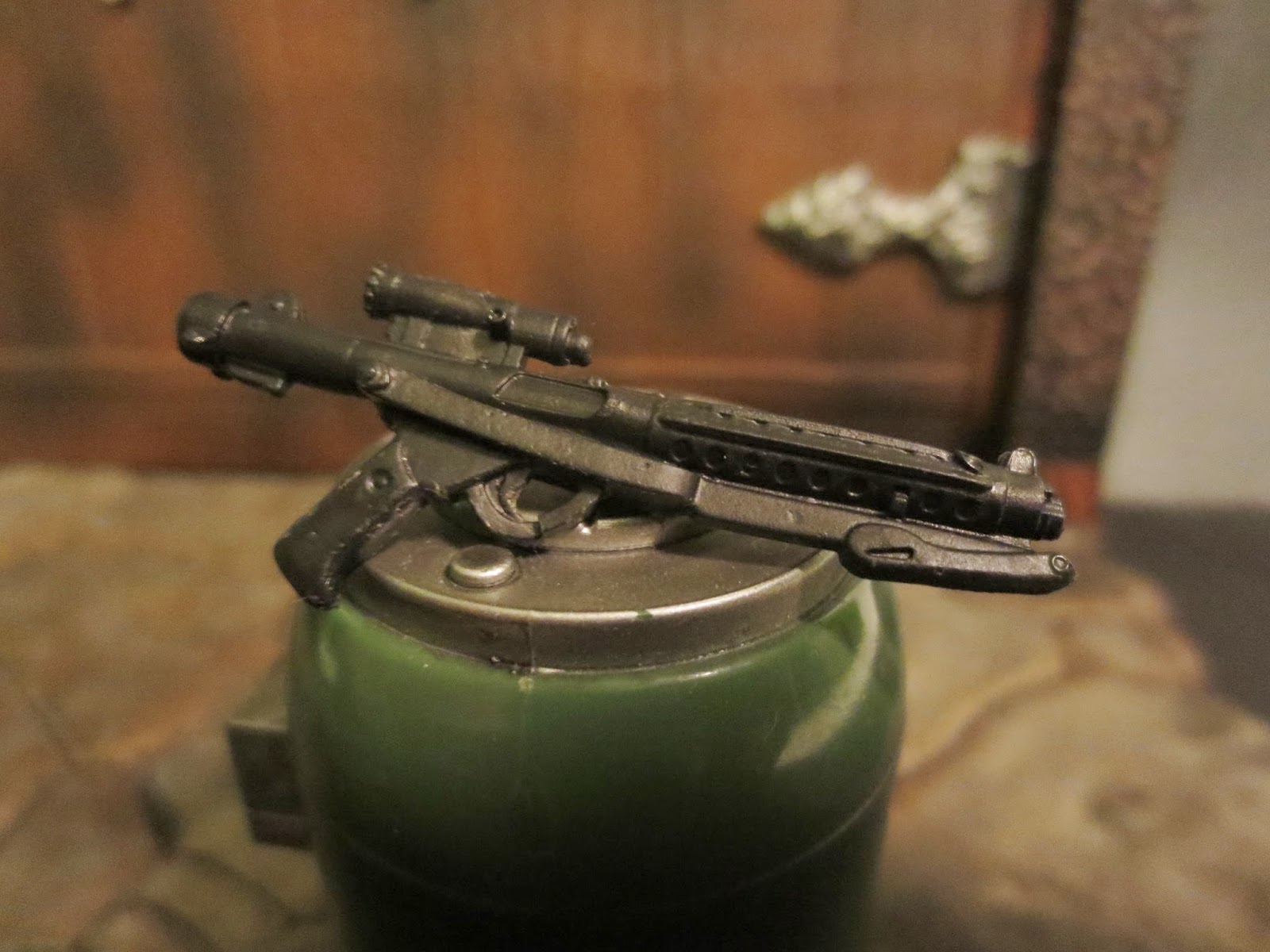 Included with the figure is the standard E-11 Blaster Rifle. It's a nice sculpt that looks the same as the other E-11s in the line although the trigger guard tore on mine. It's not noticeable and actually helps the figure hold the rifle better, but just be careful. I was actually hoping this figure would come with an SE-14 model blaster pistol as the SE-14C is not only one of my favorite blasters but Hasbro has also included it with a couple TIE Pilot figures in the past. Alas, this guy only gets one accessory. 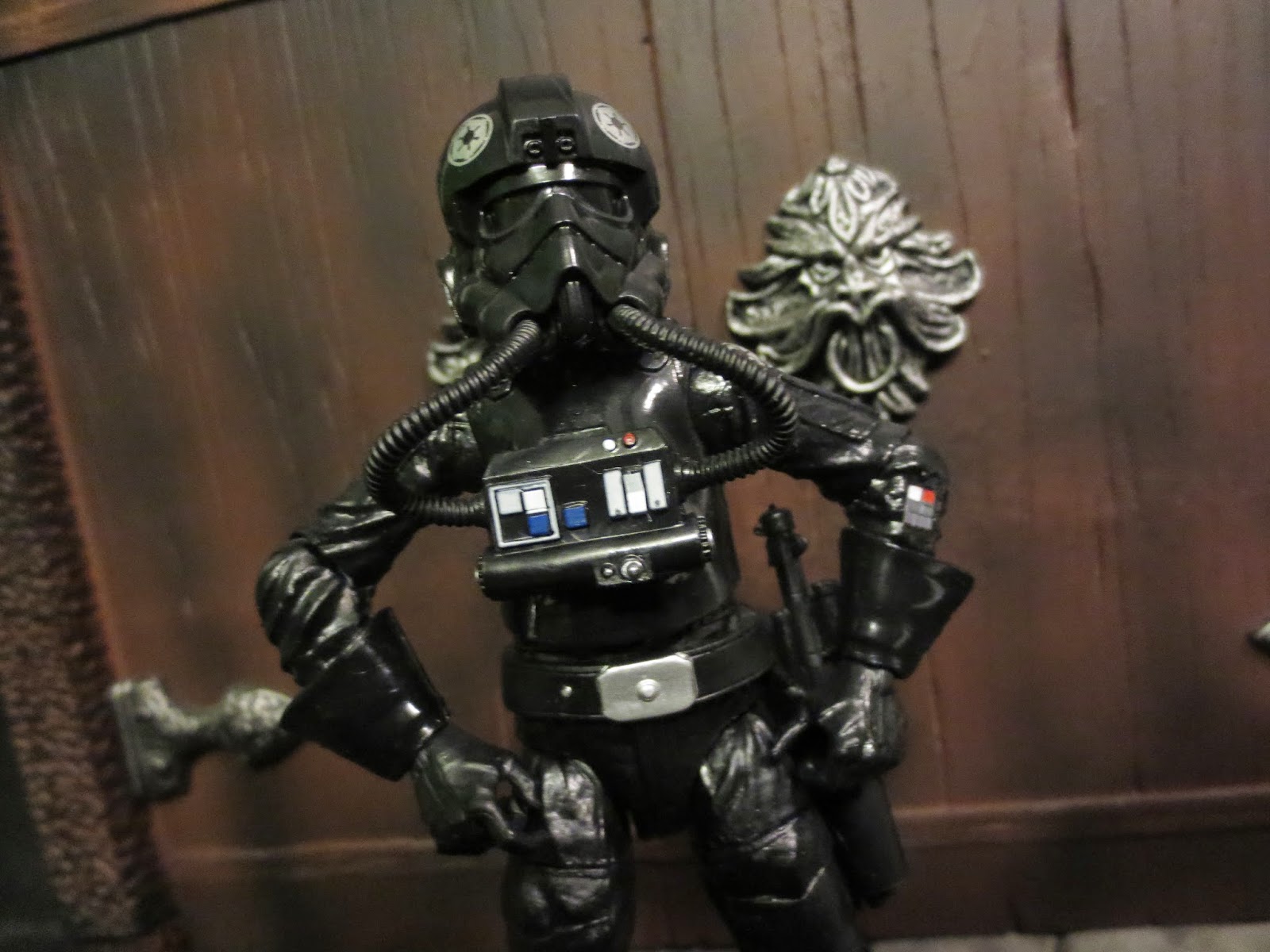 I really, really like this figure. It seems that without fail Hasbro has been able to nail the various troopers and clones every time in this line. The Stormtrooper, Sandtroopers, Clone Trooper and Sergeant, and Biker Scout have all been the best (or among them) figures releases in each figure's respective series and the TIE Pilot is no exception. The only complaint I have at all is that I would have liked for the TIE Pilot to come with another accessory. As I mentioned above, while I can't find any film stills that justify its inclusion, the SE-14C pistol does have some history as being a TIE Pilot weapon in the Hasbro toyline. I'm just a big fan of having more accessories. Still, the paint and sculpting on this guy are incredible, the articulation and quality control are nearly perfect, and the design for connecting the tubes from the chestbox to the helmet works great. I'm easily feeling that the TIE Pilot is a Great and a 1/2 figure and another rockstar figure in this line. While he's been tough to find, keep checking your local Walgreens for this guy. I honestly feel like with their selection of Marvel Legends, FunKo Pops, Lego minifigures, Game of Thrones, Doctor Who, and Star Wars Black, they have a better toy section than most big box retailers like K-Mart or Wal-Mart. Whatever it takes, though, don't pass this guy up if you're looking for the best of the best in The Black Series. He certainly qualifies. 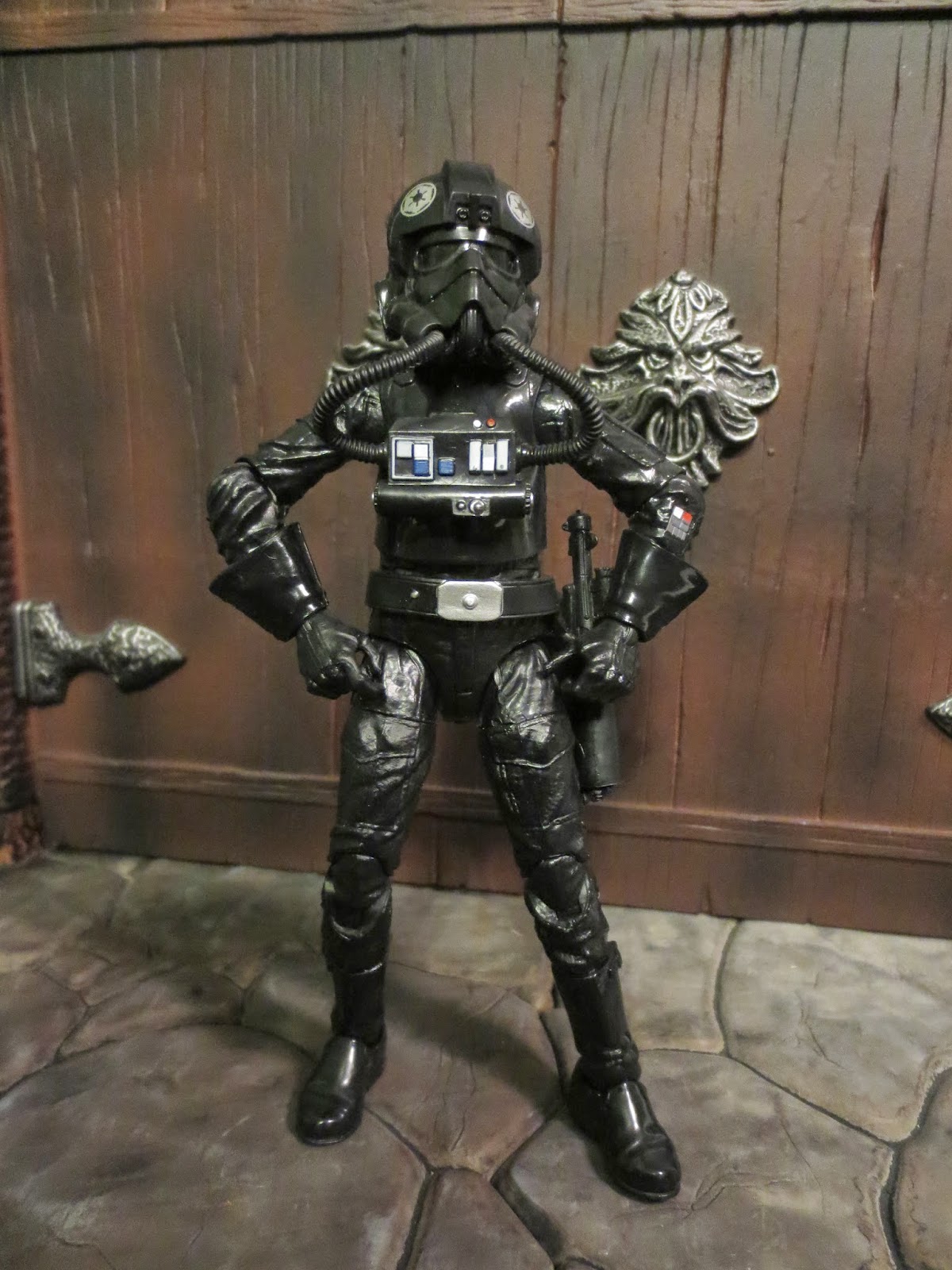 I've reviewed quite a few Star Wars figures in the last couple of years, including: