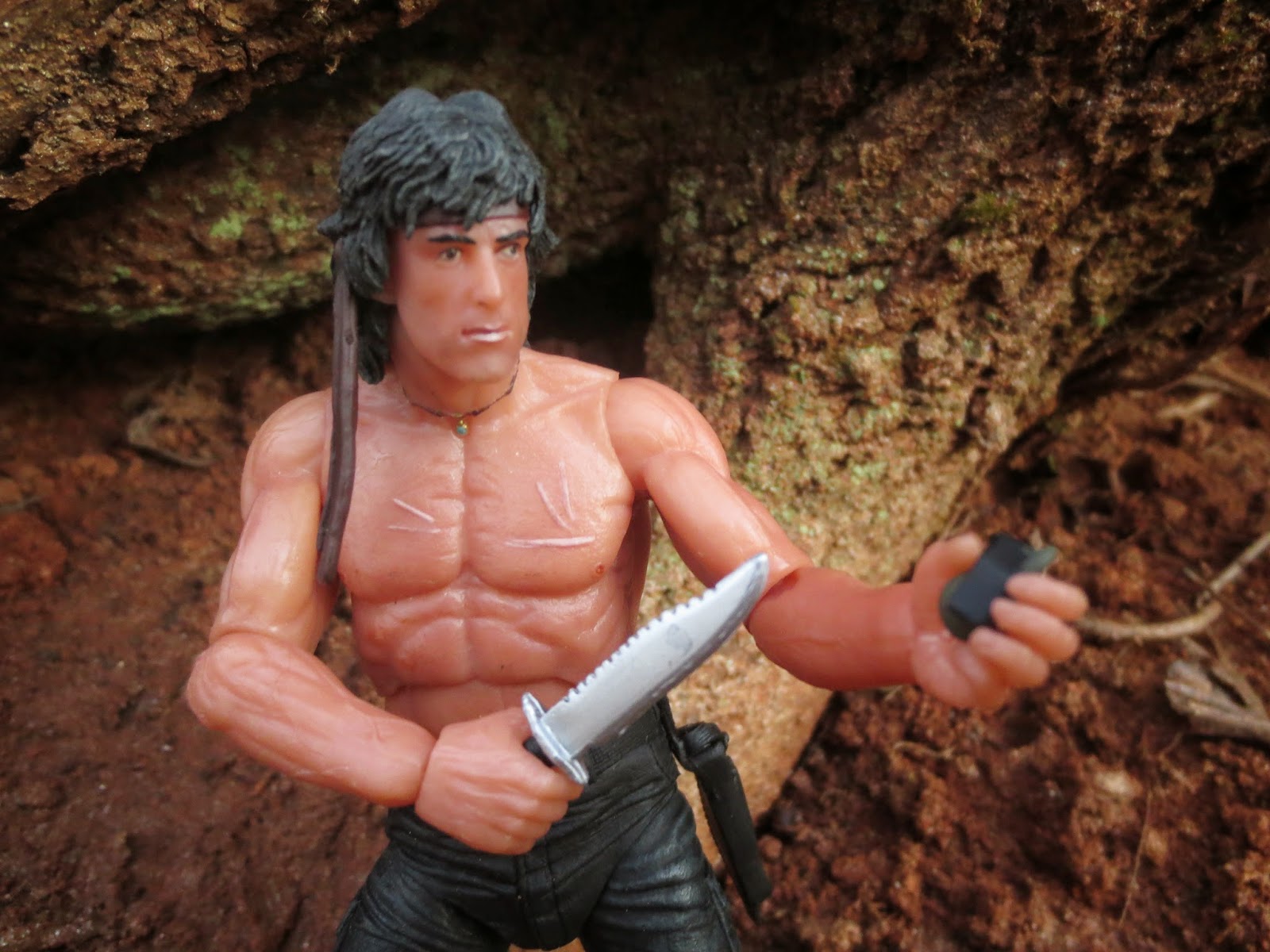 First Blood might be the best of the Rambo films but Rambo: First Blood Part II is without a doubt the most iconic. This is the film that inspired 1000s of other action movies and video games, was parodied in both Hot Shots! Part Deux and UHF, and made us all want to wear red bandannas around our heads. In 2013 NECA gave us two awesome Rambo figures from First Blood and late last year they gave us out first version of Sly Stallone from the second film. This is part 7 of my Christmas haul and was another gift from my in-laws. Did your in-laws buy you an action figure of a shirtless, machine gun wielding Sylvester Stallone? Cause mine did! More details after the break... 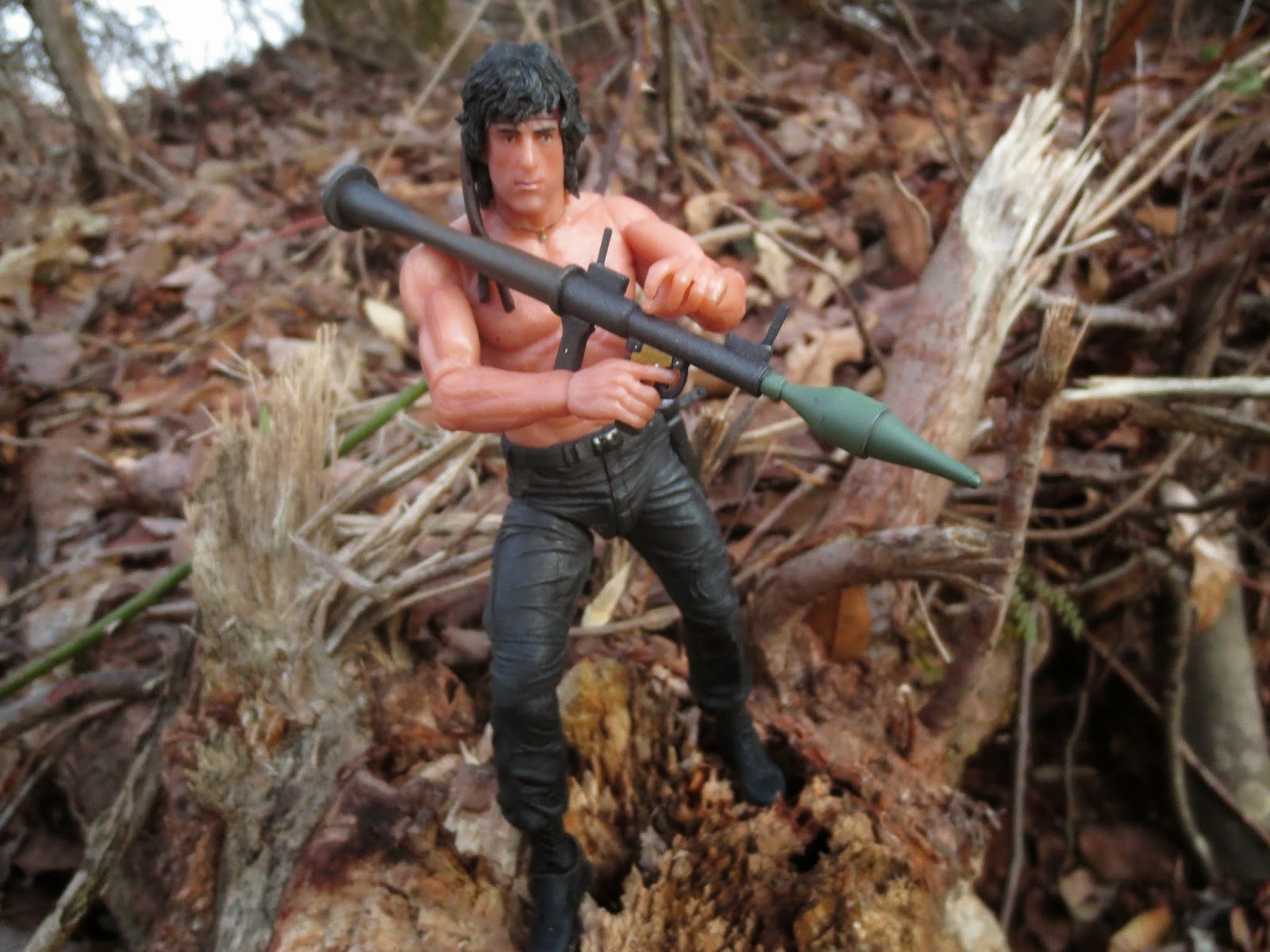 *Where to start? Rambo looks awesome! He's much more muscular than the First Blood versions of the character (he did spend time doing hard labor in prison) and thus has a larger build. NECA does a great job of molding figures in the appropriately colored plastics to match their flesh tones and Rambo is no exception. His scarred, bulked up body looks like it's covered in sweat and his scars are even painted. Notice the jade Buddha Amulet Rambo's wearing, too? It's the one he was given by Co Bao. Small detail that, along with the accessories, marks this as a Rambo from later in the film. 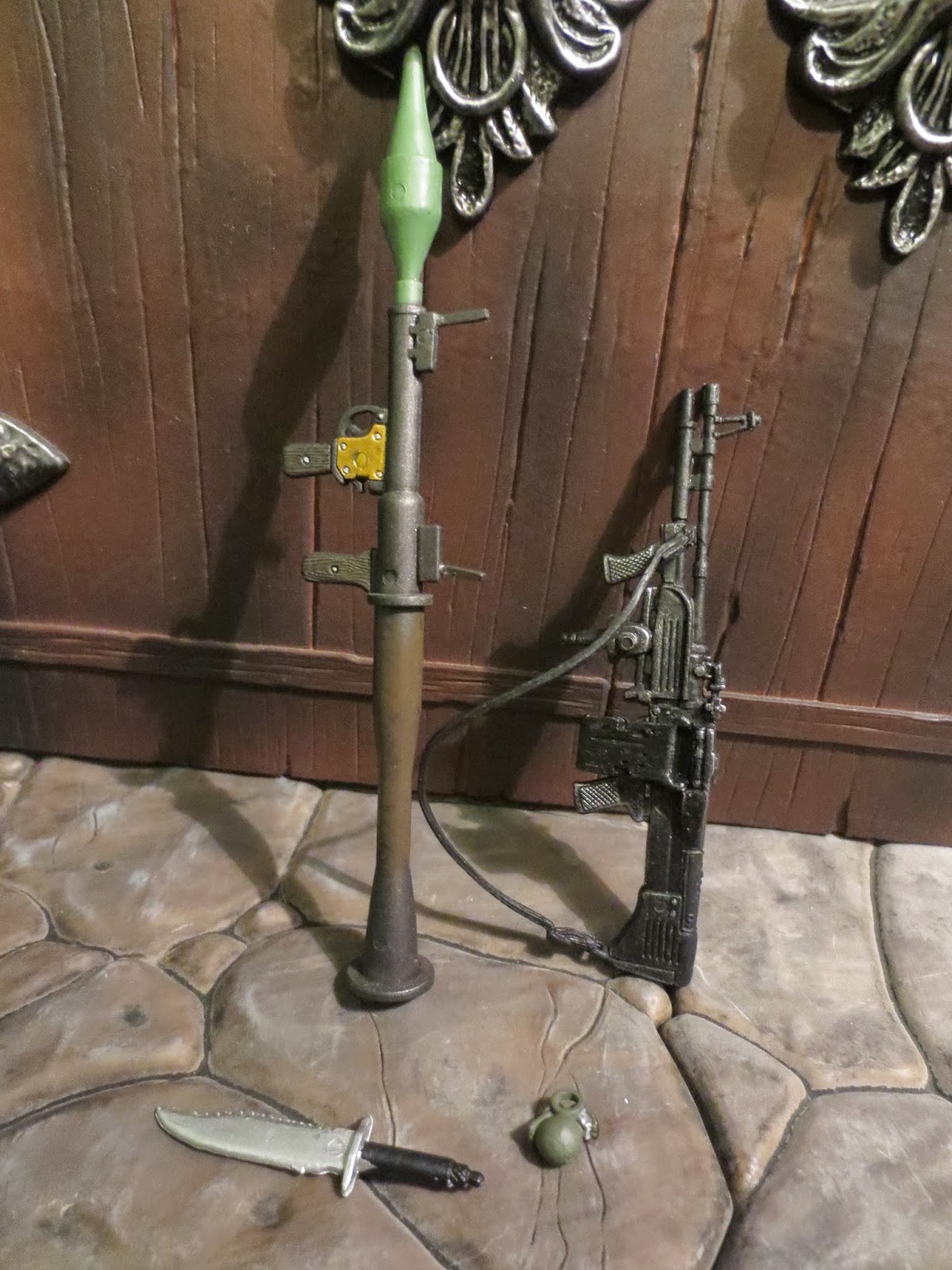 * Let's talk about those accessories: They're awesome! Rambo comes armed with the M60E3 machine gun that he takes from the Huey helicopter, the RPG-7 he uses to blow stuff up, a grenade, and his trusty survival knife that was designed for the film. The sculpts are great on all of these and the paint work is also quite sharp (the RPG-7 looks the best). If you have Rambo hold the RPG in his right hand, the grenade in his left, tuck the survival knife in its sheathe, and use the strap to put the machine gun across his back, he can carry all of his accessories. Convenient! 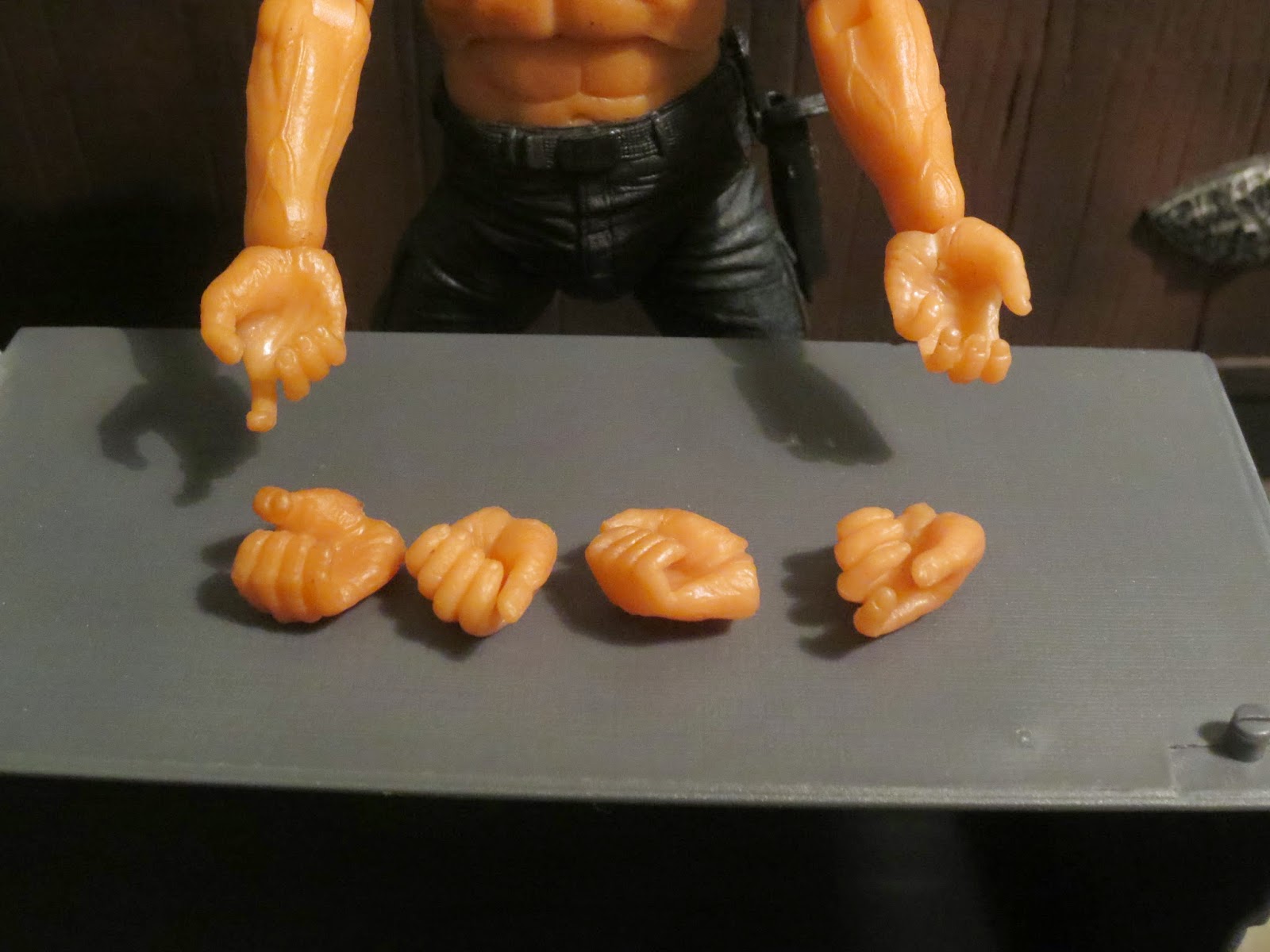 *Not only is Rambo fully armed but he can appropriately hold each weapon as well thanks to the six hands that are included with the figure. The wrists are easy to swap and stay on nice and snug. Rambo comes with two pistol grip hands, two tight grip hands (for the knife), another tight gripped right hand that looks like it works for holding the knife to be thrown, and a left hand that cradles the grenade. 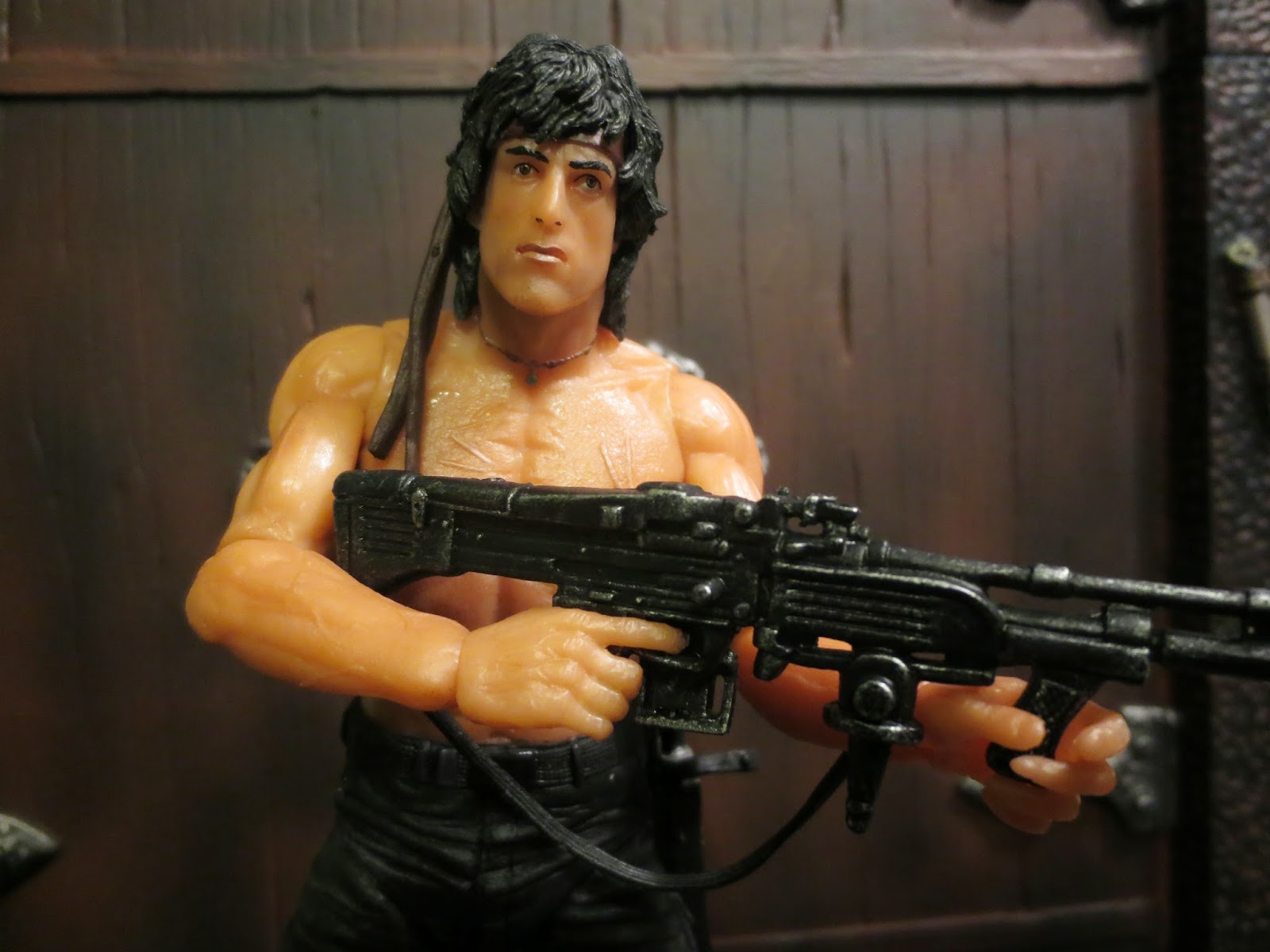 *From most angles, this is a pretty nice Stallone likeness. NECA has done a great job of capturing Sylvester Stallone's aging through the late 1970s and throughout the 80s in their Rocky line so they have quite a handle on his facial structure. There's no denying who this figure is supposed to look like. 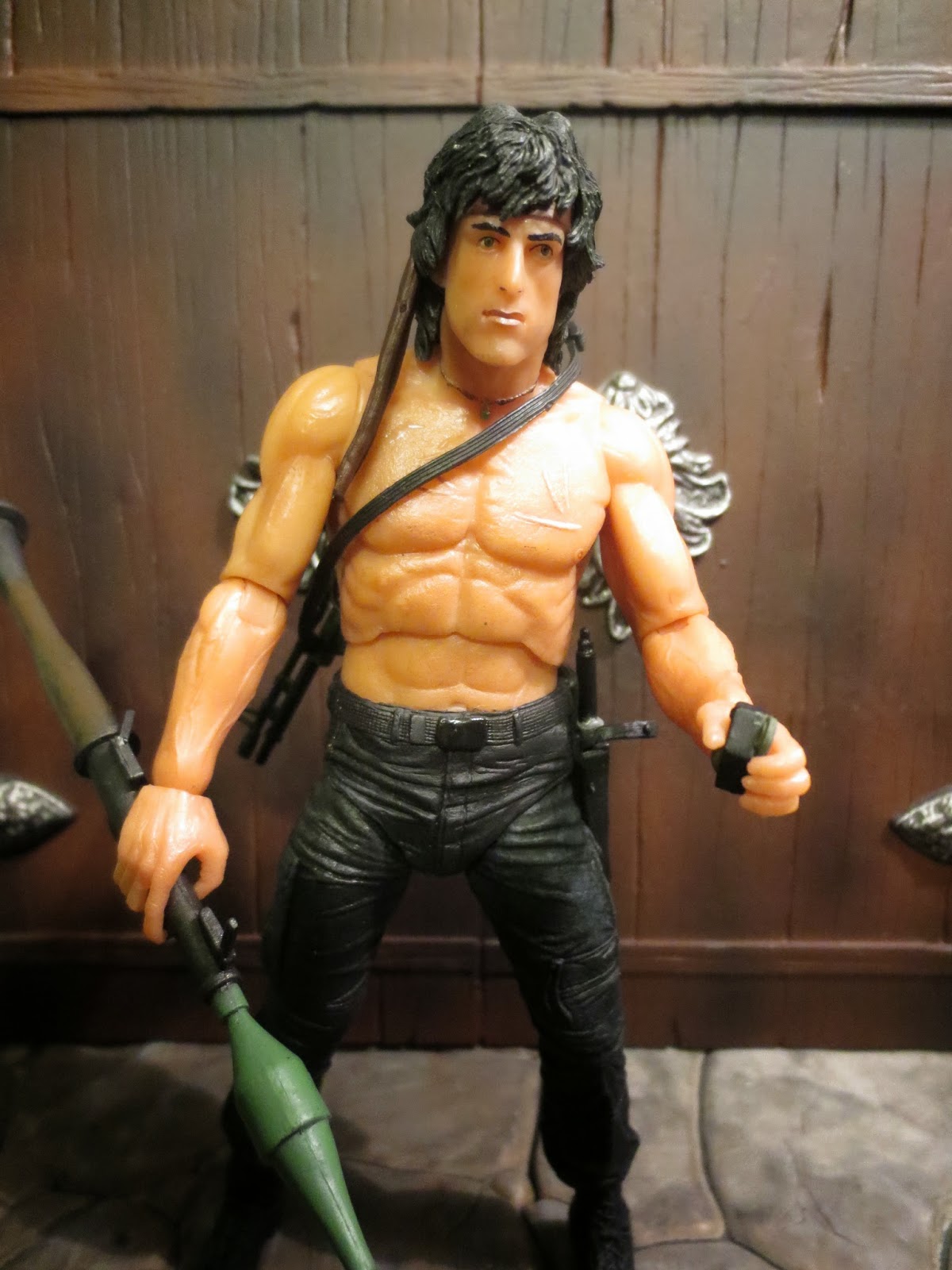 *The articulation is really good. It feels solid and I don't have any breakage concerns. The extremely well articulated ankles and legs allow for some great dynamic stances while the upper body allows you to let Rambo hold his weapons in a variety of death dealing poses. 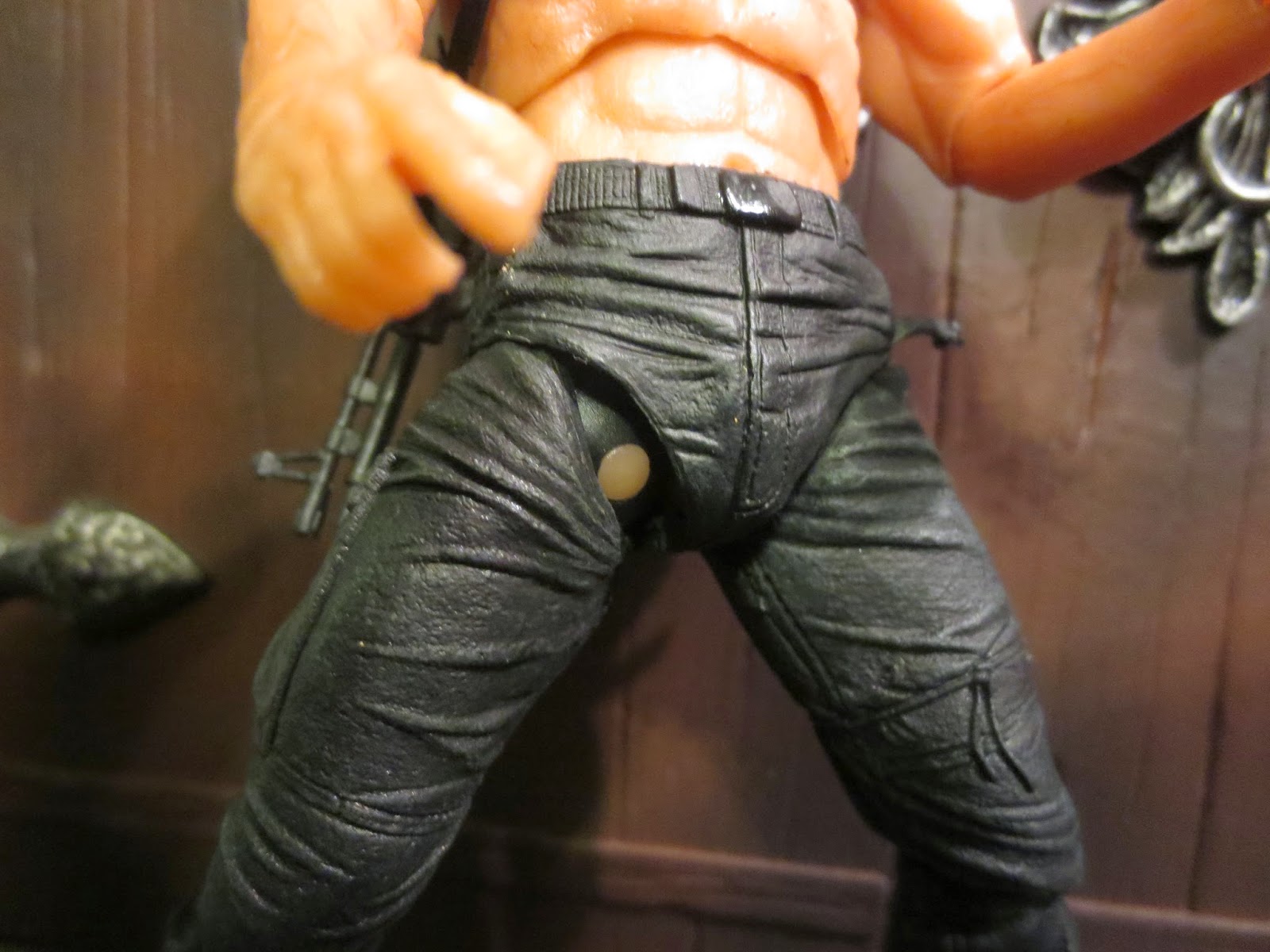 
*NECA's 30th Anniversary Freddy Krueger had the same problem that this figure has: His crotch piece underneath the pants overlay is molded in the flesh tone plastic. You see, to help keep the joints from hindering the look of the sculpt, NECA covered them with a soft plastic covering that forms the waist. It looks much better aesthetically but, in certain poses, the flesh toned plastic peeks out making it look like Stallone's Italian Stallion is popping out. Why does NECA keep doing this? My guess: Frank Stallone.

*Some of the weapons are a bit fragile! The rear sight on my RPG-7 broke off at some point while I was taking pictures. The strap on the machine gun feels a bit fragile, too, so be careful! 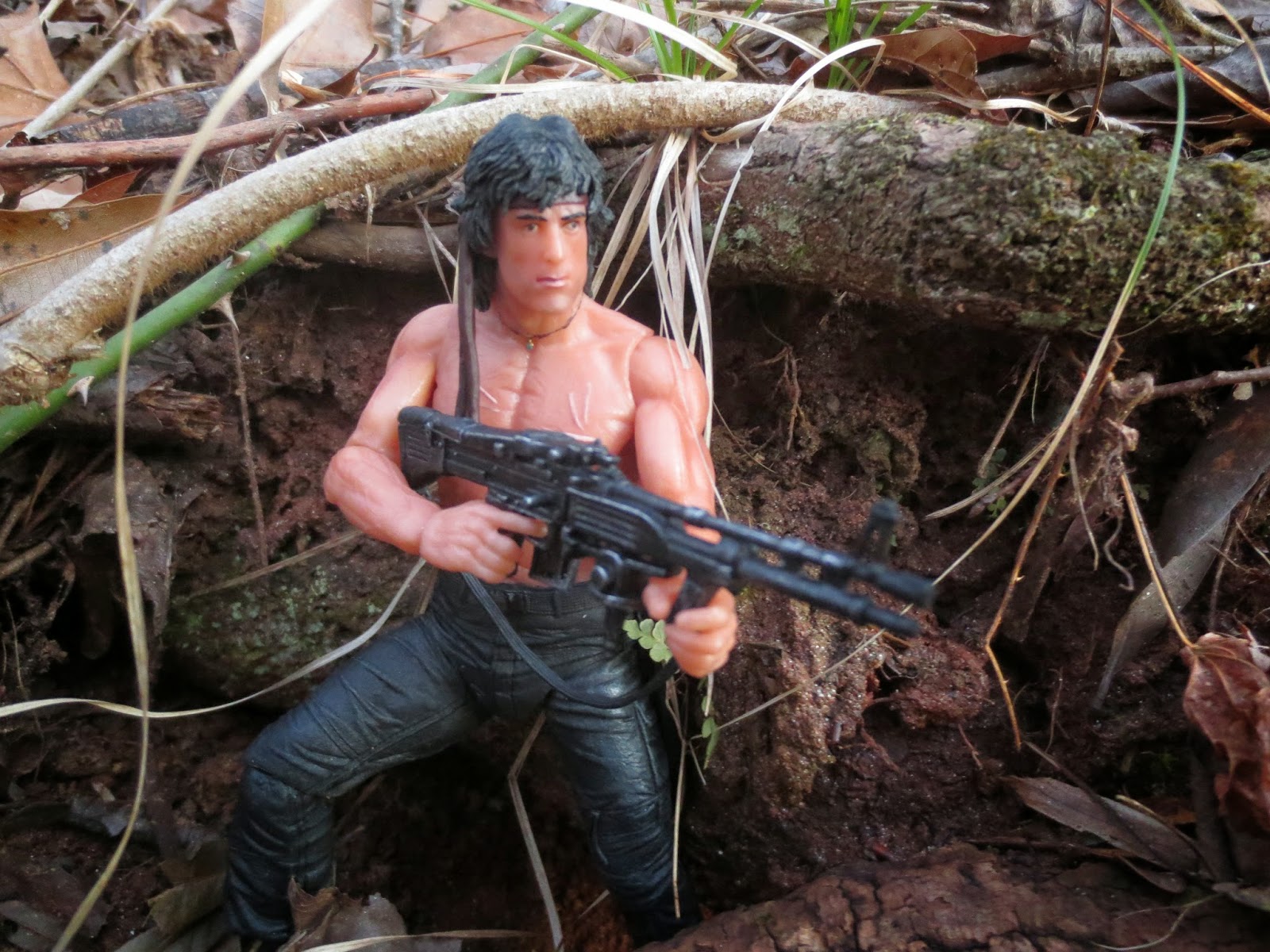 As a big fan of Sylester Stallone, Rambo, and NECA, this figure fires on all cylinders for me. I think Rambo's knife could have been a bit better and I wish NECA would just paint over the joints underneath the waist pieces, but overall this is a solid figure. While I was thrilled to get figures from First Blood, this is Rambo's iconic look that we all want on our toy shelves. It's a nice update from the old Coleco Rambo: The Forces of Freedom line and much a much better toy than the N2 Toys Hardened series Rambo. I do hope that NECA releases two more figures from Rambo: First Blood Part II (Rambo in his parachute gear and an angrier Rambo with bow and arrows) although I'd like to see NECA reach every film in the series at least once, but as it stands this is a fantastic figure. Easily a Great.  Put this guy and Dutch from Predator together and the rest of your action figures will cower in terror. That's the power of 1980's Stallone and Schwarzenegger.