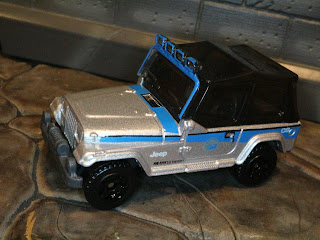 Today I'm checking out another car from Mattel's Jurassic World Matchbox line and like the solid green Textron Tiger I reviewed earlier in the week this one is also a vehicle with a color scheme made up for the toyline. This creation takes the body of the 1993 Jeep Wrangler staff cars from the original film but gives it the paint scheme and logo design of one of the Jurassic World Mercedes Benz staff cars. It's an interesting concept and, for around a buck, I'm willing to allow some experimentation in this line. Let's check out this interesting concept vehicle after the break... 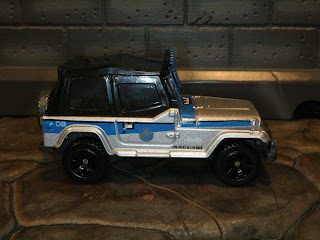 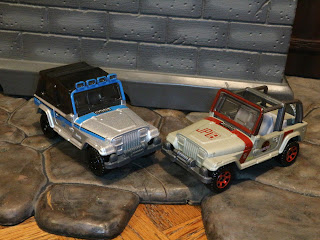 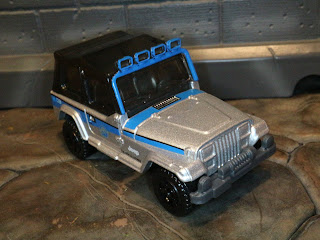 * To be honest, this is a very slick vehicle and I kind of like the idea that Jurassic World would have taken a few of the older service jeeps and fixed them up, given them a new paint job, and put them back in service as staff vehicles. The paintjob looks good and the features like the lightbar on the top and the covered cab are pretty cool. 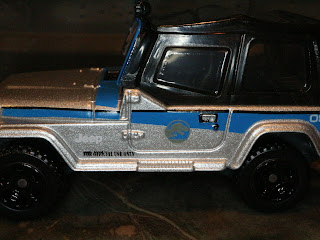 * This Jeep Wrangler has the same paint scheme and labeling as the 2014 Jurassic World Mercedes Benz including the Jurassic World logo, the #09 designation, and the "For Official Use Only" warning. The printing is very neat and clean on this one, just like on the rest of the vehicles in the series. 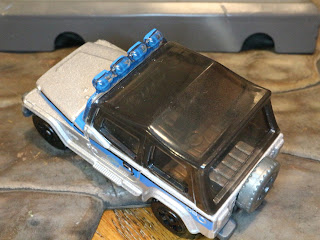 
* I like the presence of the top on the jeep but I can't understand why the top is translucent? The windows, maybe, but not the full top. It looks kind of strange to be honest. 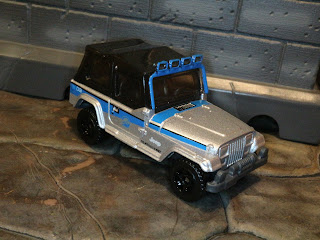 While it isn't an actual vehicle that appears in the film I still kind of dig this re-purposed and updated 1993 Jeep Wrangler. The vehicle itself is quite solid except for the see through top, which just seems like a weird design choice. Still, it's not a deal breaker or anything for a toy that costs around a buck (usually these sell for a around $1.25). Pick one up if you're curious. It's a cool find and hopefully shows that Mattel is going to offer up a few more interesting vehicles in this series. Personally, I want to see a helicopter or two and a couple of the hunters vehicles from The Lost World.