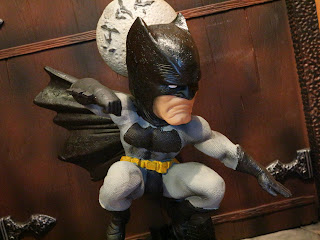 A couple of weeks ago I reviewed a Leonardo Eekeez figure that FOCO sent to me in a big box with some other cool stuff. Today I'm checking out another item I received from FOCO: A bobblehead of Batman from Batman: The Dark Knight Returns. I'm pretty sure I've reviewed more figures of Batman than any other character, (yes, even Batgirl!) so this bobblehead of Batman will be in good company. Frank Miller's depiction of an older, angrier Batman is one of my favorite depictions of the character and I've checked out a number of collectibles based on that interpretation of the Dark Knight. FOCO's release adds another item to my collection so let's check him out after the break... 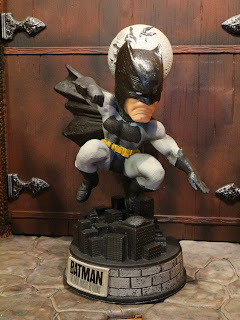 Package Includes: Figure, base, and moon. 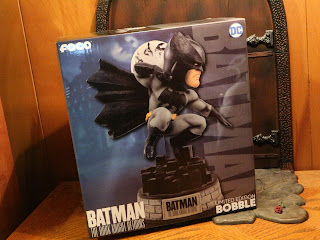 
* Batman comes in a oversized box that keeps the figure well protected inside in a Styrofoam tray. There isn't a window on the front but the front shows a picture of the bobblehead with some solid licensing art on the sides. 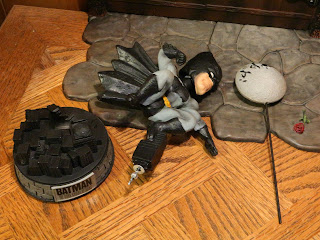 * Batman actually requires a bit of assembly! Batman is attached to a "building" that fits into the base. There's a wingnut and washer on the bottom of the "building" that you'll have to tighten up to keep Batman securely in place. The moon simply plugs into the back of the base, behind Batman. 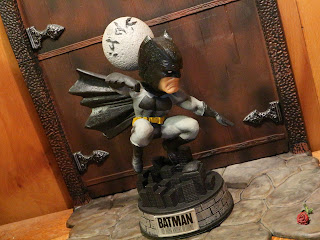 * I really like the composition of this piece. The pose, placement of the moon, and the small Gotham skyline on the base are very evocative of the style of The Dark Knight Returns. While this is a bobblehead, the proportions of the head are a little exaggerated but not overly so. It still manages to be a pretty severe looking Batman. 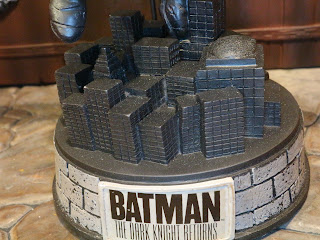 * I love the base. Not only does it feature the log for Batman: The Dark Knight Returns against a weathered brick wall (the back of the base features the oversized DKR Bat symbol) but the top of the base showcases a miniaturized Gotham City skyline. I love this detail and how epic it makes the piece feel. 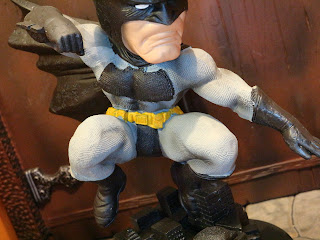 * The pose of the bobblehead and the proportions of Batman's musculature definitely match up well with Frank Miller's artwork. Batman looks large, a mixture of muscle and just overall bulk. Interestingly, the suit features a unique texture which kind of reminds me of the texture on the BvS version of Batman (which was inspired by the DKR suit). I never think of the DKR suit being textured, but the detail works here quite well and looks really good in person. 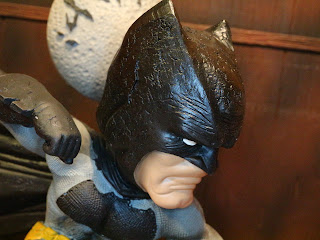 * I'm going to talk about the headsculpt twice, but first I want to address the head from the side, which is how you'll predominantly be viewing the piece. The cowl looks really impressive with lots of texturing and a great shape to it. Batman's incredibly angry face also looks appropriately menacing from this angle. It's a great DKR depiction of Bruce for sure. 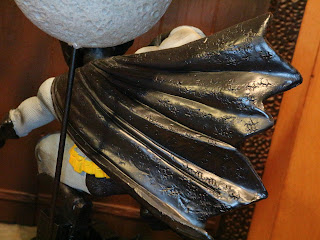 * The cape also features the same texturing as the cowl. It not only makes the piece feel more "realistic" but it visually makes the cape more interesting. The sculpt of the cape looks dynamic and feels quite solid. Sometimes bobbleheads feel a bit fragile but this one seems quite durable. I mean, it's not a toy or anything, but I wasn't nervous about handling it. 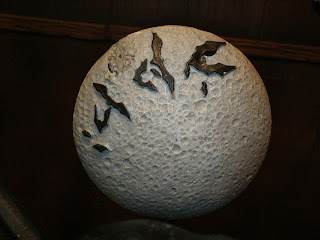 * Last, and certainly not least, is this cool display of the moon. It sits on a post and rests behind Batman, floating in the sky. The texture on the moon is great and it features a colony of bats silhouetted against it. I guess in theory you could turn it around to the back, which doesn't have the bats on it. Just a plain moon, you know? It's always nice to have display options. 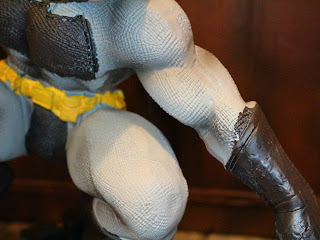 
* The paintwork on the figure has some problems around the edges. There's a lot of paint slop on the edges such as on the gloves and on the utility belt. The paint applications would really benefit from being tightened up a bit. 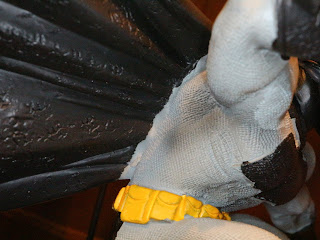 * Again, you can see the rough paintwork between the various transitions. The work on the line separating the cape and the suit is also rather messy. 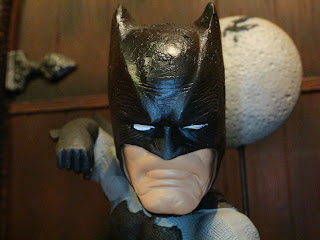 * The face looks great from the side but from the front? Well, something about it looks off to me. I totally get that the DKR Batman can be tough to capture properly. The lower face looks good, the upper cowl looks great, but the eyes... well, the eyes make Bruce look like he's sad rather than really, really, REALLY angry. Fortunately you don't usually view the bobblehead from this angle, but I thought it worth mentioning. 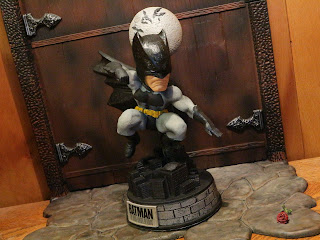 FOCO seems to do a lot with sports licensing, which I know next to nothing about. I'm glad they've been releasing lots of comic and horror themed items, though, as they're putting out some cool stuff. While the paintwork is a bit rough in spots on the body, I really do like the design of this Batman bobblehead. The base and the moon in the background are really cool and, overall, the piece captures the feeling of Frank Miller's artwork well. This is a Good and a 1/2 boblehead and definitely is worth considering for fans of Batman and The Dark Knight Returns specifically.

I've reviewed so many Batman collectibles that he has his own review archive! Check out The Dark Knight Gallery for more Batman reviews!


The subject of this review was provided to me free of charge by FOCO.
Posted by Barbecue17 at 1/05/2019