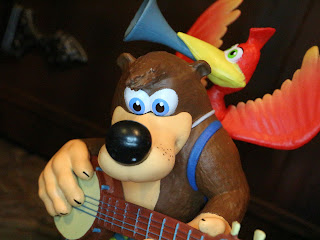 If you were a Nintendo fan during the end of the SNES era and throughout the Nintendo 64 era, you definitely know the name Rare. While they moved to developing for Microsoft in 2002, Rare's years with Nintendo are easily their most popular. During that time they released hit after hit including the Donkey Kong Country and Donkey Kong Land series, Killer Instinct, GoldenEye: 007, Perfect Dark, Jet Force Gemini, Blast Corps, and Banjo-Kazooie. Banjo-Kazooie is a game I have a ton of nostalgia for as not only is it still a very solid adventure game/ collect-a-thon, but it' a game that I picked up one summer while staying with my grandma. We spent so much time playing it together and had a blast with the game. While for years I just assumed that Banjo-Kazooie were Nintendo characters, it turns out that Rare owns them and thus they'll never show up in the World of Nintendo toyline. That doesn't mean they won't be able to stand alongside that line, however, thanks to ThinkGeek's Totaku line of figures. Featuring characters from many non-Nintendo properties, Totaku is a series of non-articulated mini statues reminiscent of Nintendo's Amiibo or the now defunct Disney Infinity series. The biggest difference between Totaku and other similar lines, however, is that there is no in-game functionality. These are simply mini-statues and nothing more. Still, I realize I use my Amiibo and Infinity figures far more as just cool figures rather than use them for games, which probably is something ThinkGeek realized, too. Let's check out Banjo-Kazooie, the 28th figure in the Totaku collection, after the break... 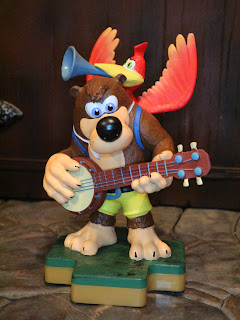 Height: 4 inches from the bottom of the base to tips of Kazooie's wings. 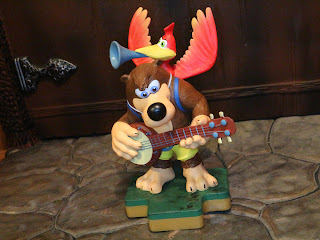 * The mini-statue is quite nicely composed and features Banjo the bear and Kazooie the Breegull playing their musical instruments. There is no articulation; this is a simple, articulated figure that's bright and colorful. 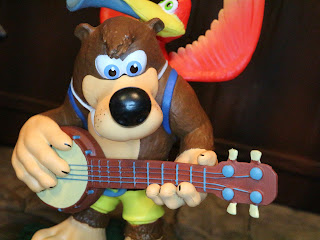 * The sculpt is really good on Banjo. His fur is nicely detailed and his banjo has paint applications on all of the vital places. 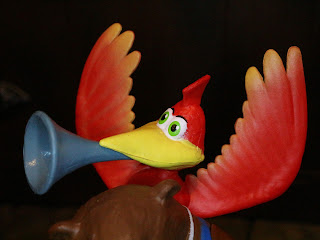 * Kazooie is bright, colorful, and has her wings thrust up in the air. She's also holding a small horn (or a kazoo, perhaps?) in her mouth. 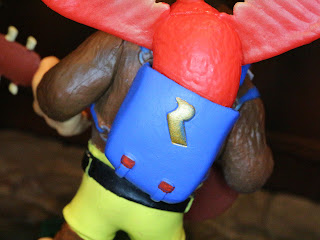 * Turn the statue around and you can see how Kazooie is riding along in Banjo's backpack, just like in the games. The clasp on the back also looks similar to the Rare logo. 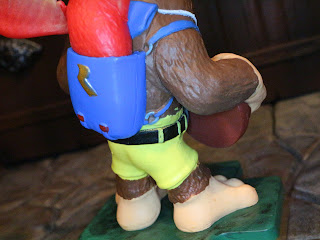 * The paintwork is bright and colorful overall but there are definitely some areas that are a bit sloppier than others. I particularly had problems on the backpack clasp, the belt, and the separation between Banjo's shorts and fur. 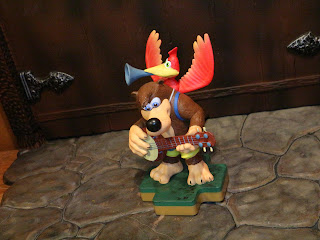 I saw the Totaku figures around throughout the last year (they first hit in early 2018 but I never paid them much attention until I saw Banjo-Kazooie. They're going to be hanging out with my World of Nintendo figures or my Amiibo simply because that's the crew I've always associated the characters with. This isn't the most exciting release of 2018 but for fans of the game it' a nice little treat. I don't know that Totaku has inspired the collecting craze that other similar lines have but they definitely seem to have some degree of popularity. In the US I believe they are exclusively sold through GameStop, so that's where you gotta check for them.


This is the first figure of Banjo and Kazooie I've reviewed on the site.
Posted by Barbecue17 at 1/28/2019