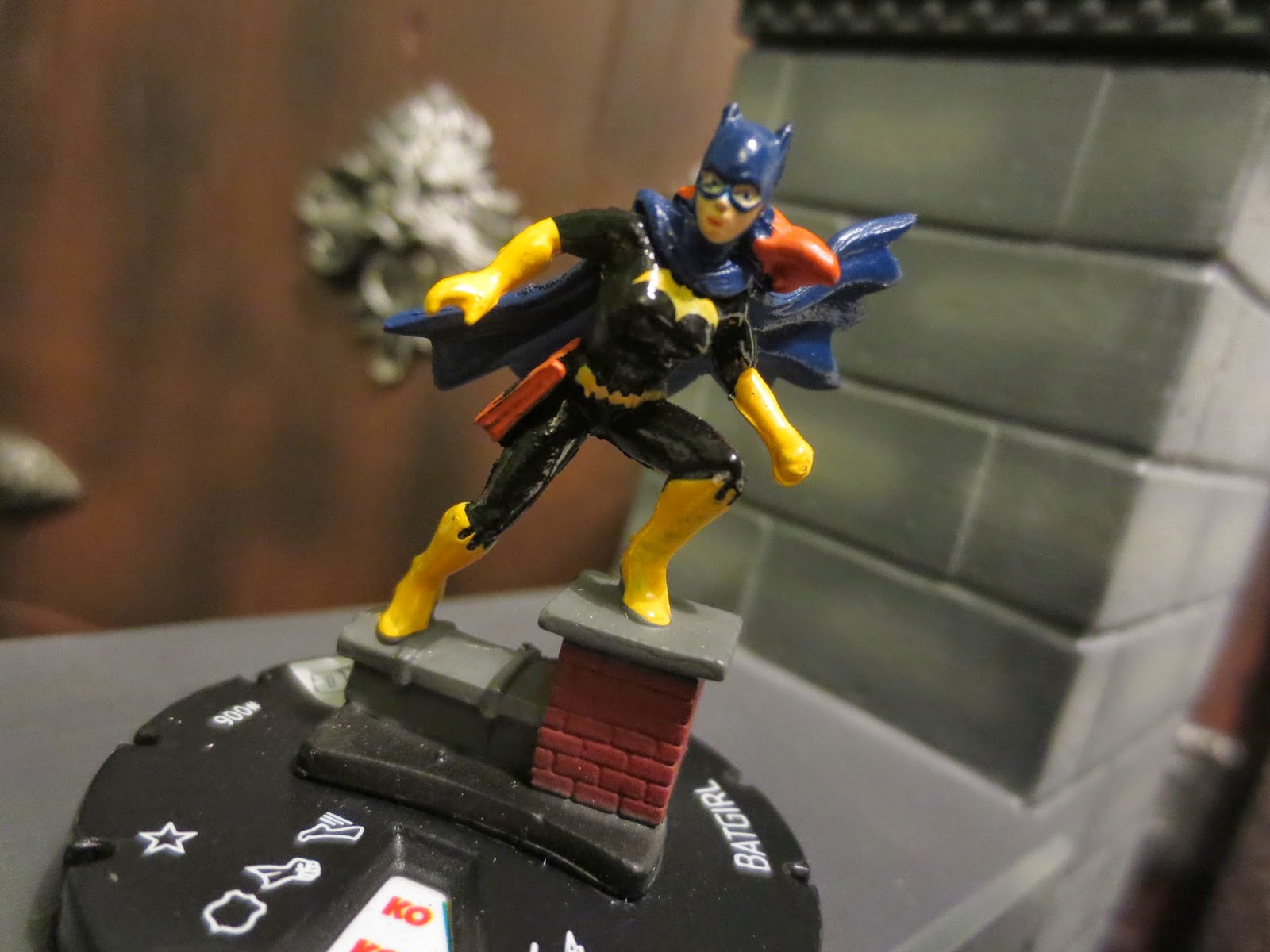 Today's going to be a simple, short review of a new Batgirl item I've just recently added to my collection. It's a HeroClix Batgirl from the DC HeroClix 10th Anniversary. Released in 2012, Batgirl is the 6th figure in the set and is a fairly common figure in this line (Oracle is a much more expensive). I only paid a couple of dollars for her shipped from Ebay. Anyways, I've never played HeroClix. I've played Heroscape, Star Wars Miniatures, and a few other similar games, but I've never actually played HeroClix. Of course, I didn't buy this play with; it's part of my ever growing Batgirl collection. Ready for a quick look at a 3 year old HeroClix piece? Of course you do! Come join me after the break... 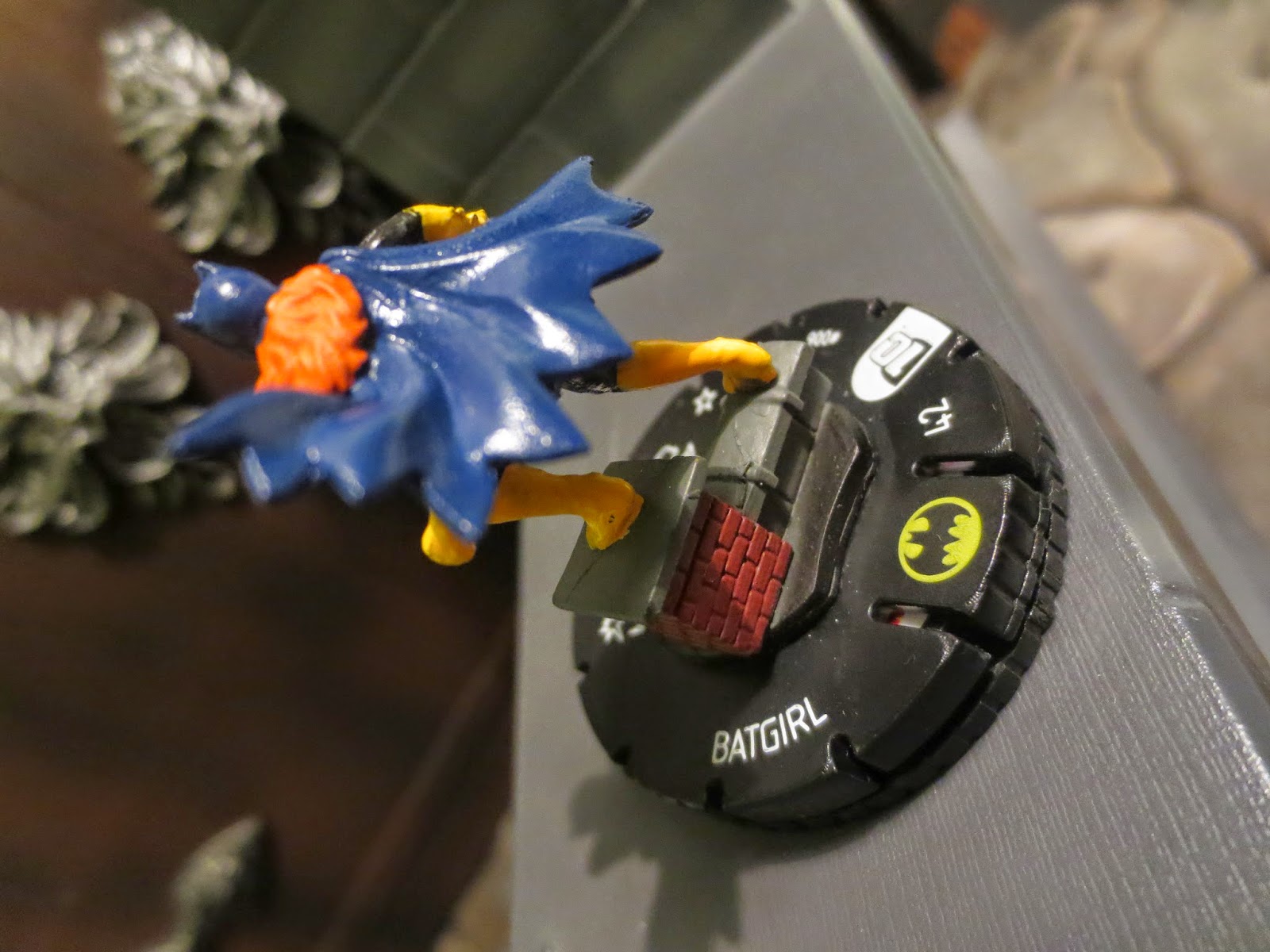 One of the things I really like about HeroClix and other similar miniature gaming pieces is that the figures come attached to little stands. This is great not only for gameplay but for shelf display as well. These guys are much less likely to tumble over than a M.U.S.C.L.E. figure. Then again, you can't really make these figures wrestle. The base has the Batman log, the set identifier (the little DC logo), and Batgirl's name emblazoned on it. 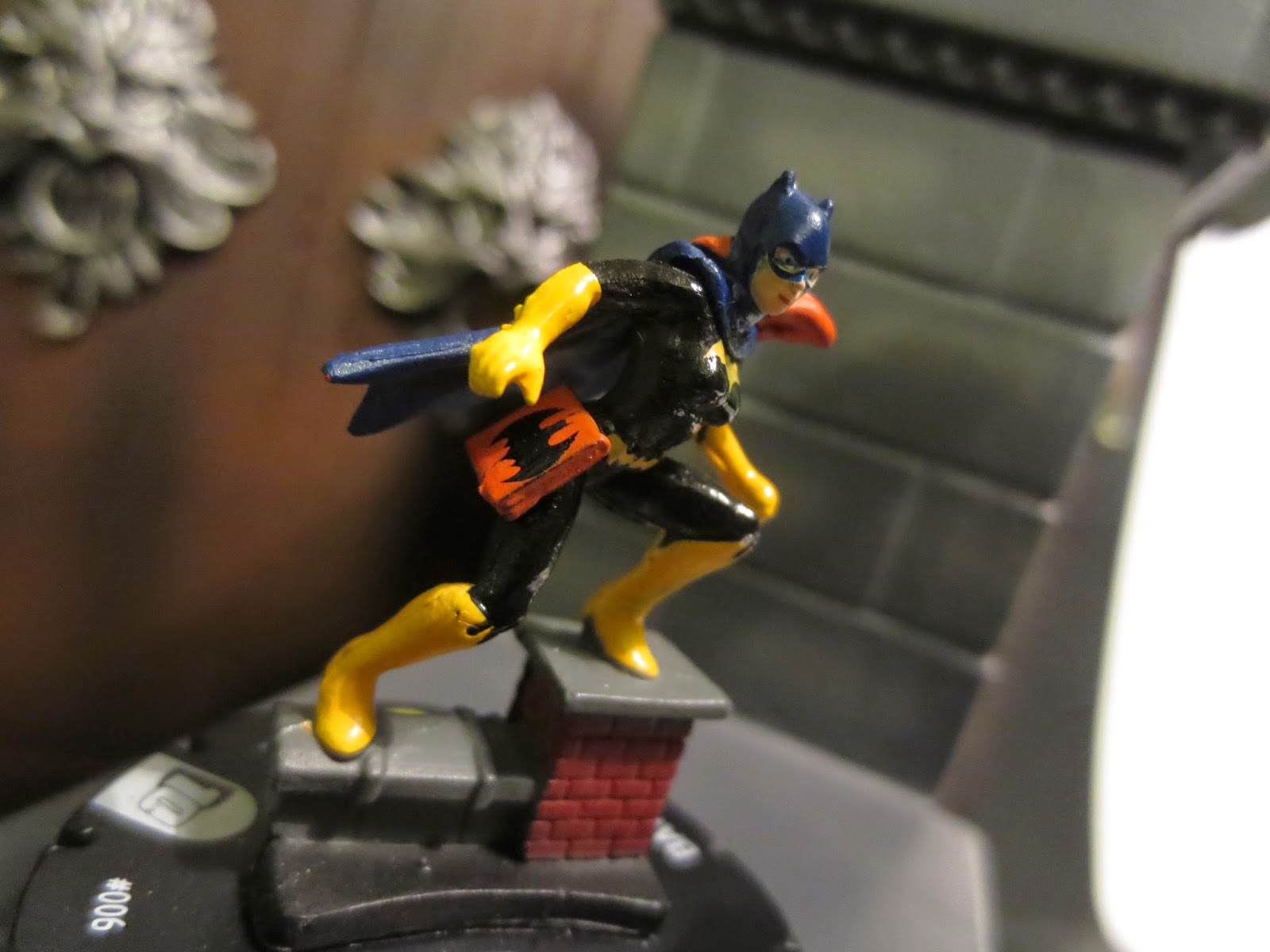 The sculpt is quite nice for a minifigure that stands barely 1 3/4 inches tall, including the base and the rooftop she's standing on. This is the silver age version of Barbara Gordon's Batgirl costume. While the black body suit with yellow details hints at that, the red and black bat purse is what really gives it away. I love this detail! The pose is great and I love how the figure is perched atop a rooftop. That's a great detail that really enhances the overall look of the figure. 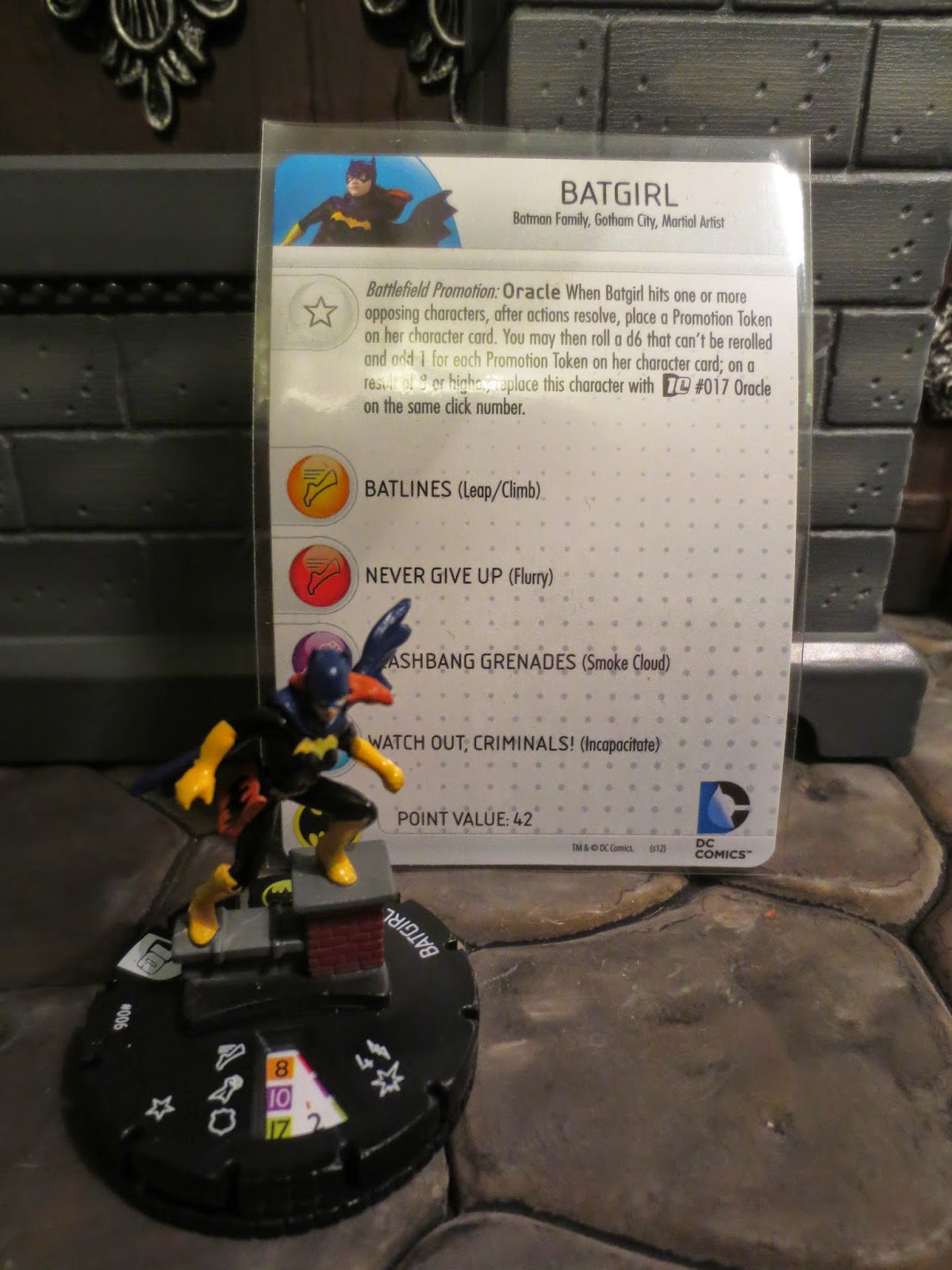 This picture didn't come out great, but it's simply to show that the figure does come with a card to show off all of Batgirl's in-game abilities. Of particular interest is that she has an ability where she can be promoted to Oracle mid-game and replaced with the Oracle HeroClix figure. Babs as Oracle was awesome, don't get me wrong, but maybe promotion isn't the right word here. It seems that this is an ability that the player upgrades to rather than one that occurs when she gets attacked by a Joker HeroClix figure. That would actually be a really disturbing game mechanic, wouldn't you agree? 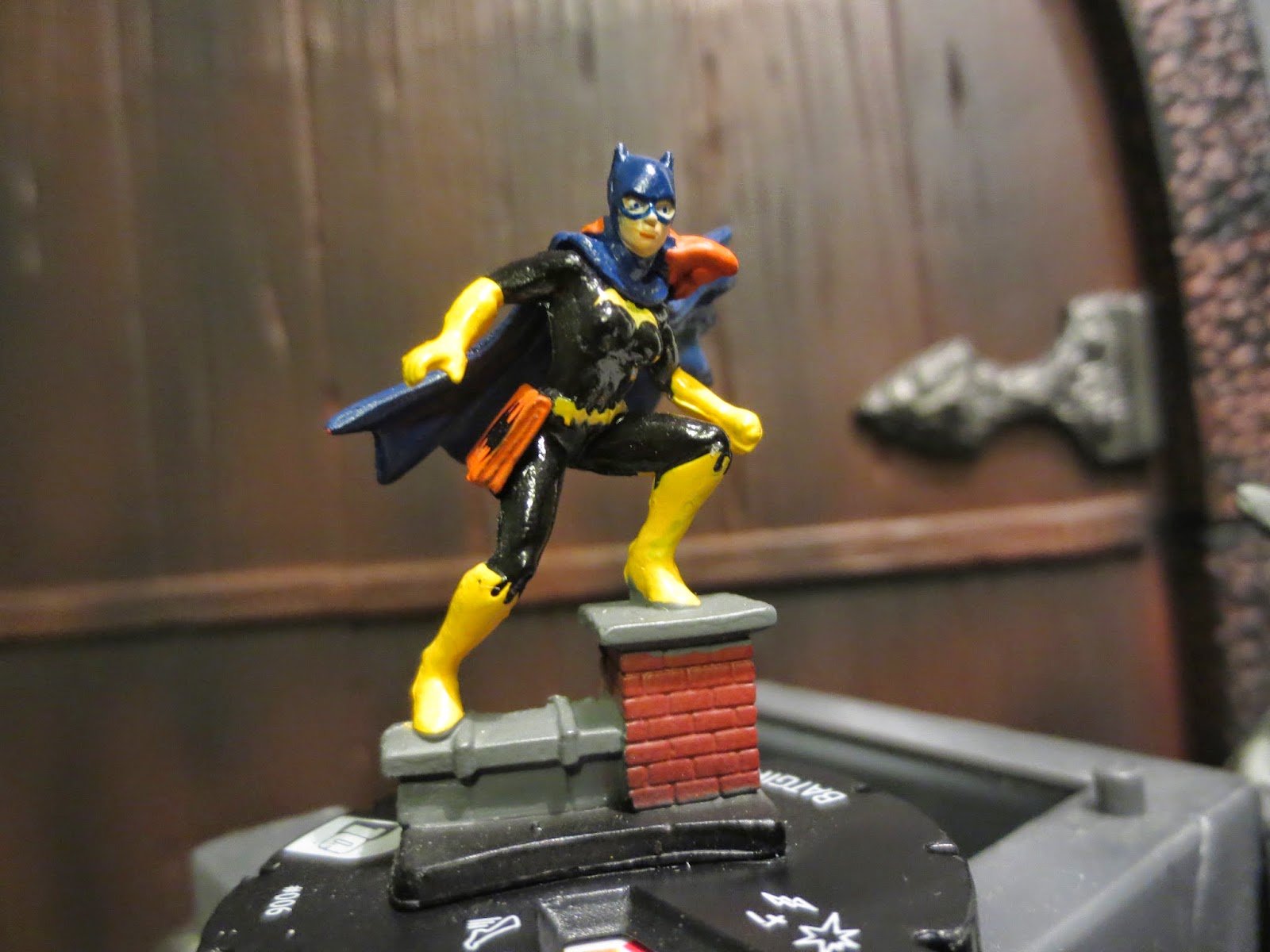 The paint looks great on Batgirl. I mean, she's a tiny little figure and the paint on her is more intricate than on the more recent Playmates' TMNT figures. Burn! Anyways, for less than $3 dollars you can pick this minifgure of Batgirl up from a number of Ebay sellers. She's a nice addition to the collection and a good Batgirl figure. I'm giving her a Great rating, particularly because of the paint, the excellent pose, and the addition of the Batpurse.