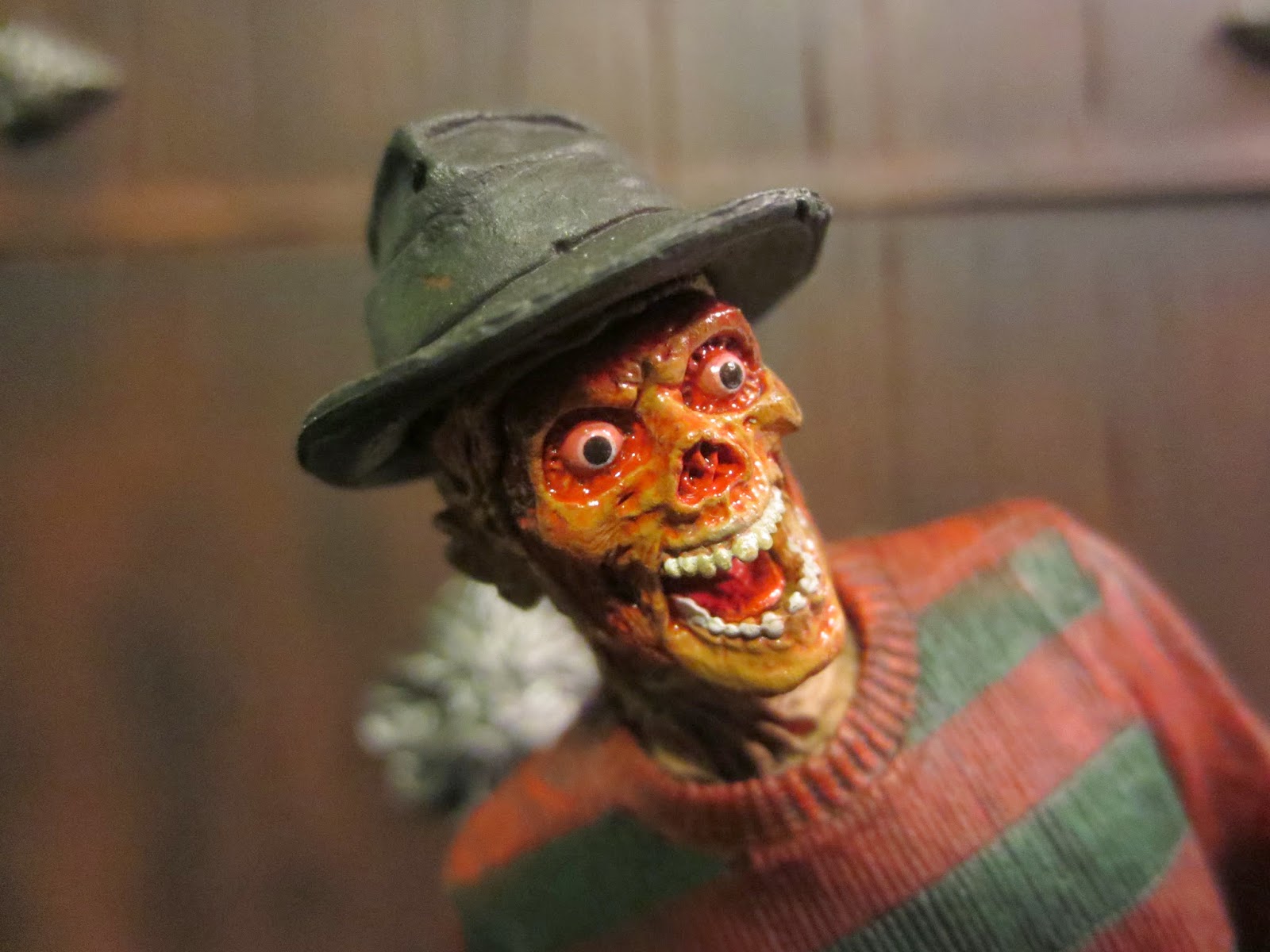 Since this weekend is the 2015 New York Toy Fair, I figured it'd be as good of a time as any to look back at some of the great toys that came out in 2014. While I've already released a list of my 10 favorite toylines of 2014, I also like to point out some individual figures from toy lines other than my 10 favorites that I really liked. Sometimes these are action figures and statues that were standouts in otherwise average lines while other times the are simply excellent released that weren't part of more expansive releases. (You can check out my Top 10 Individual Toys of 2013 if you're interested.) I try to offer a good bit of variety here so you'll see a mix of toys from different scales and styles. Enjoy and let me know what you think! What were your favorites last year? 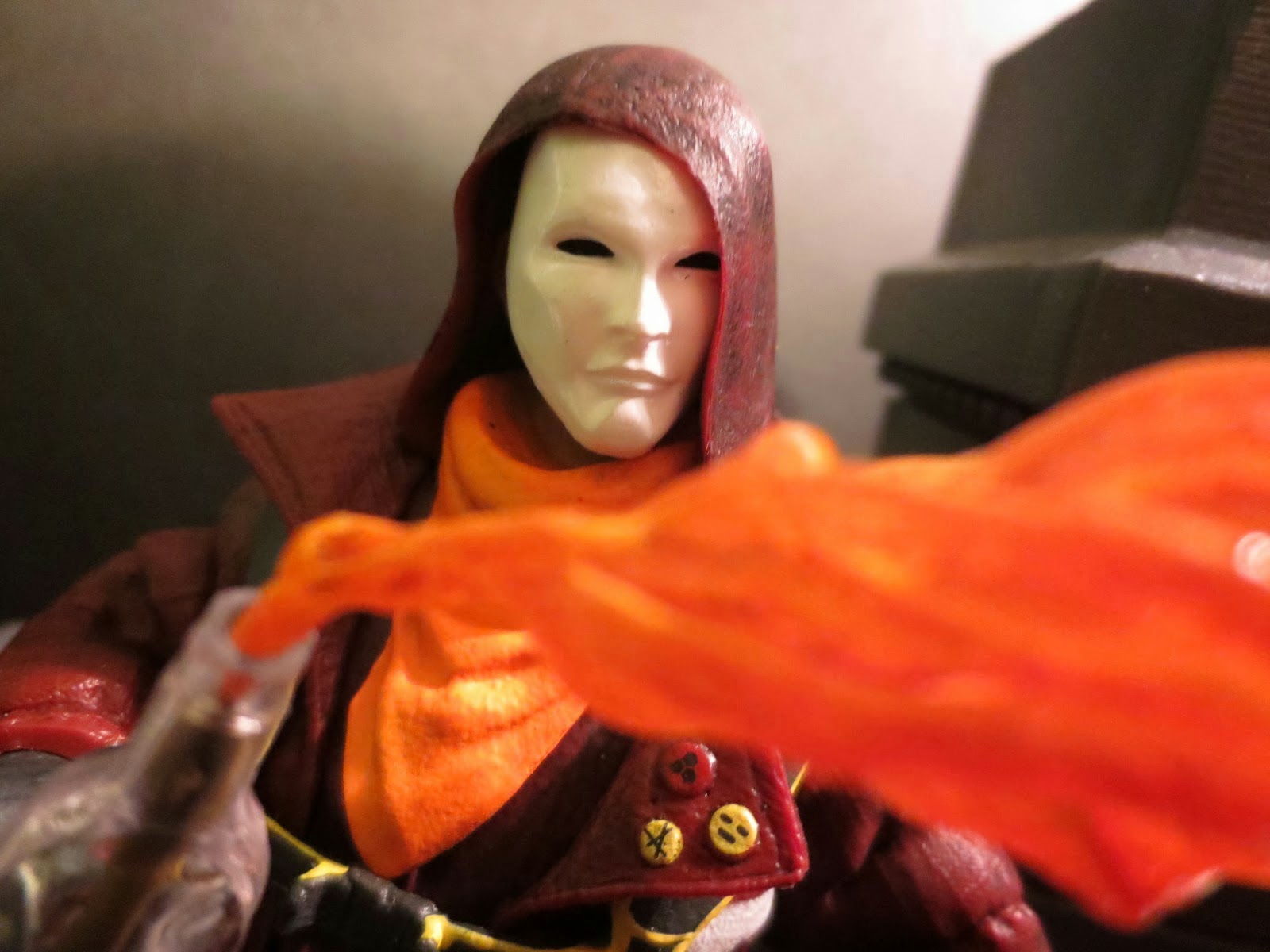 DC Collectibles' Batman: Arkham Origins line offered collectors some interesting Bat-villains this year, the standout of which was Anarky. Anarky was one of those characters I never thought we'd see in action figure form but thanks to his inclusion in the videogame Arkham Origins, we now have him! Using a soft rubber material to emulate the look of his big puffy coat, DC Collectibles really tried to do some unique things with this figure. The sculpt and paintwork are stellar and capture the game's depiction of Anarky perfectly. Rather than an homage to V from V for Vendetta, Anarky now seems more like a mixture between a member of Anonymous and an urban explorer. Not only did the figure look great but it also included one of the coolest accessories of the year: A flaming Molotov cocktail! 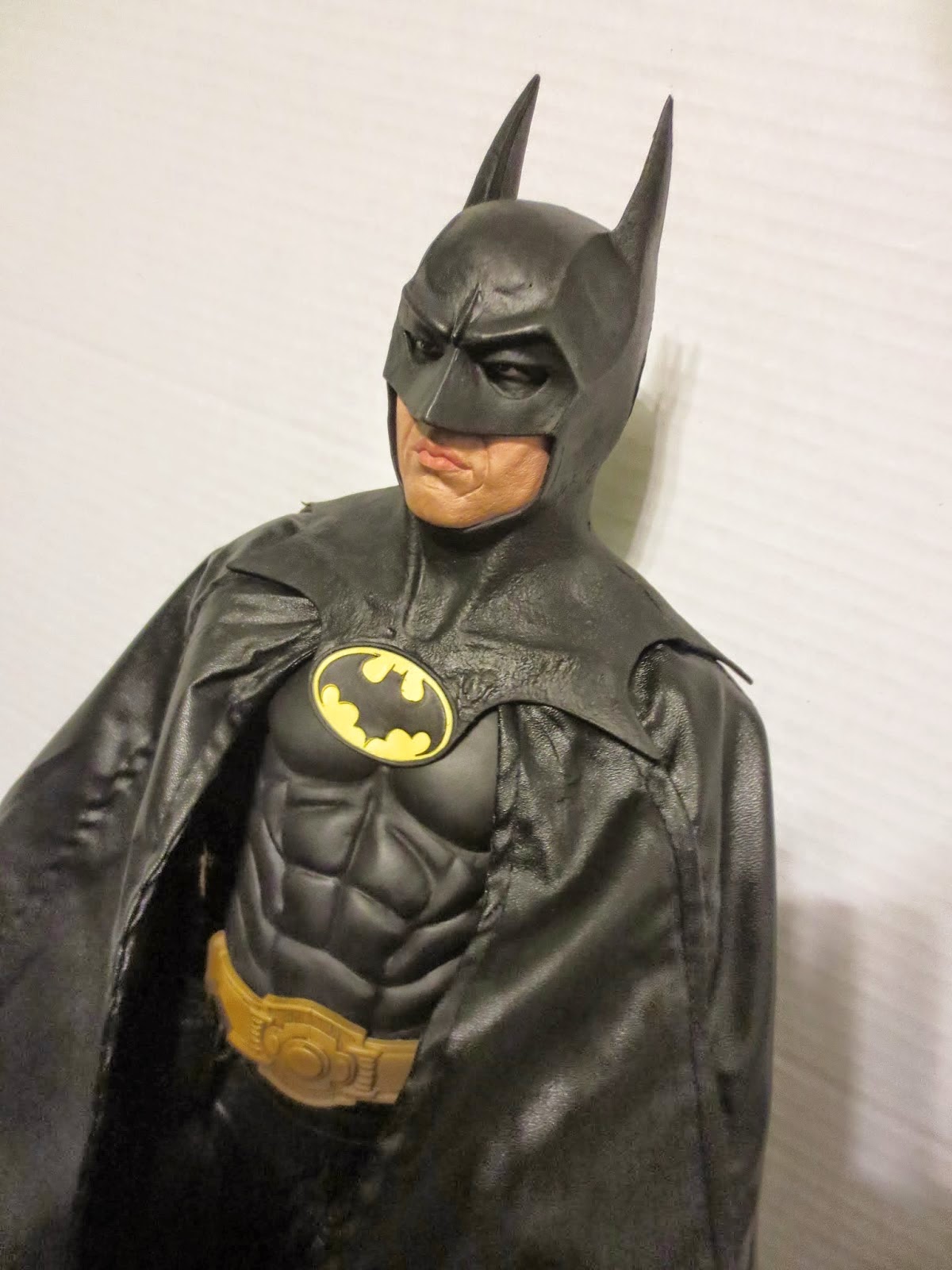 If there was a standout action figure for me this year, it was this version of Batman. NECA really showed collectors how much value you can get for your money by releasing this excellently detailed figure with a soft goods cape, multiple hands, and a nice arsenal of functional accessories. For many Batman fans around my age (I'm 31) Michael Keaton was our first true exposure to the character and I can't think of any figure that captures his unique presence better than this figure. The size of this figure is really imposing (I keep him perched atop my entertainment center in my living room) and captures the quiet menace of the character in the 1989 film.


Colonel Stars and Stripes from Kick-Ass 2 by NECA 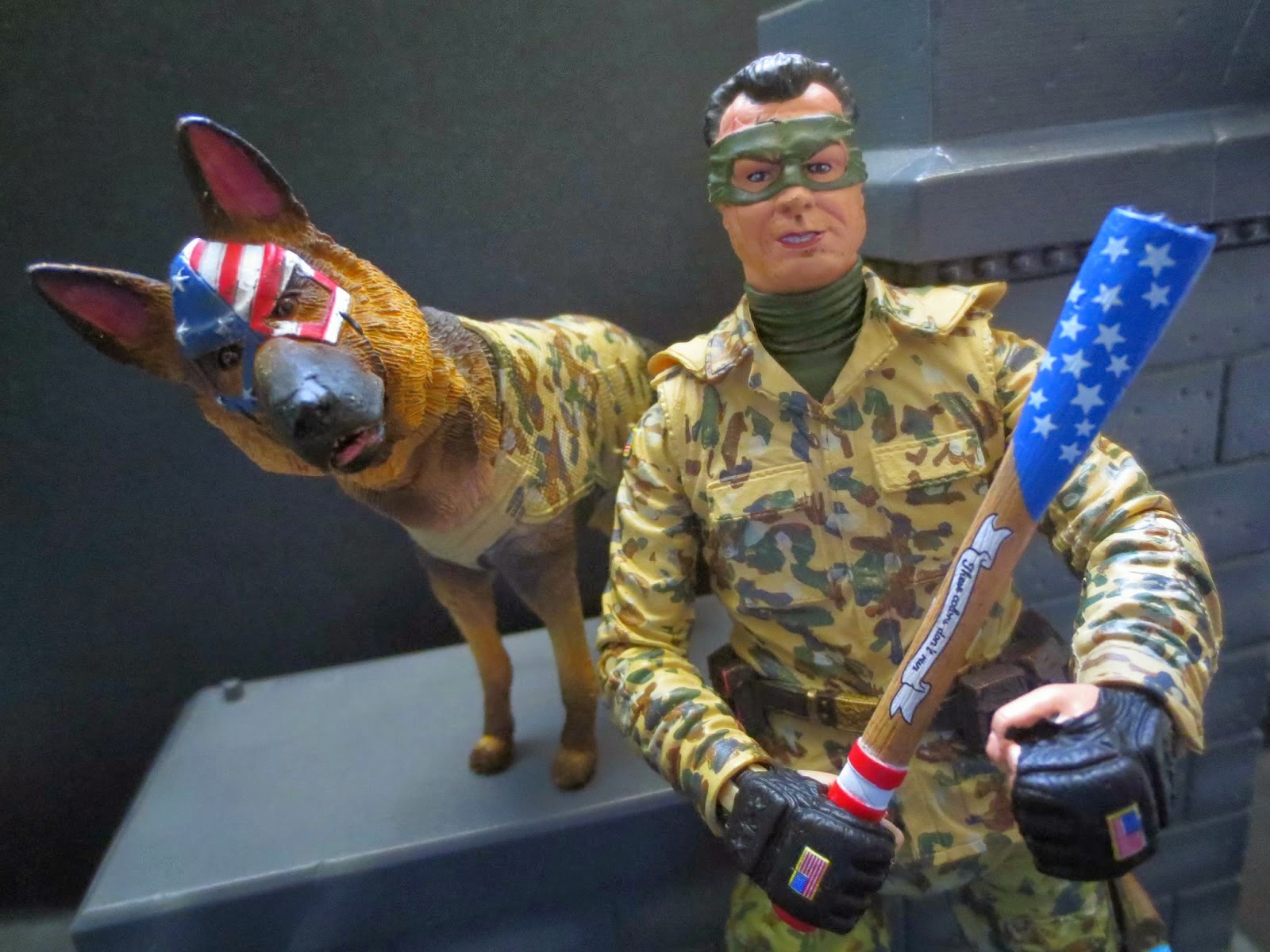 The first Kick-Ass was a pretty good movie that kind of felt like it went on a little too long. I haven't seen the second film but the Reel Brad Bell kindly lent me this figure to review back in March of 2014 and I was blown away by it. Yeah, it's not a great Jim Carrey head sculpt, but the rest of the figure is amazing. The outfit, articulation, and accessories are all top notch. I mean, this figure comes with an awesome German Shepard named Eisenhower. How can you not love it? NECA is one of the few companies that can stand up and make me take notice of action figures based on properties I could care less about due to their craftsmanship.

Daring Do Dazzle from My Little Pony Vinyl Collectibles by Funko 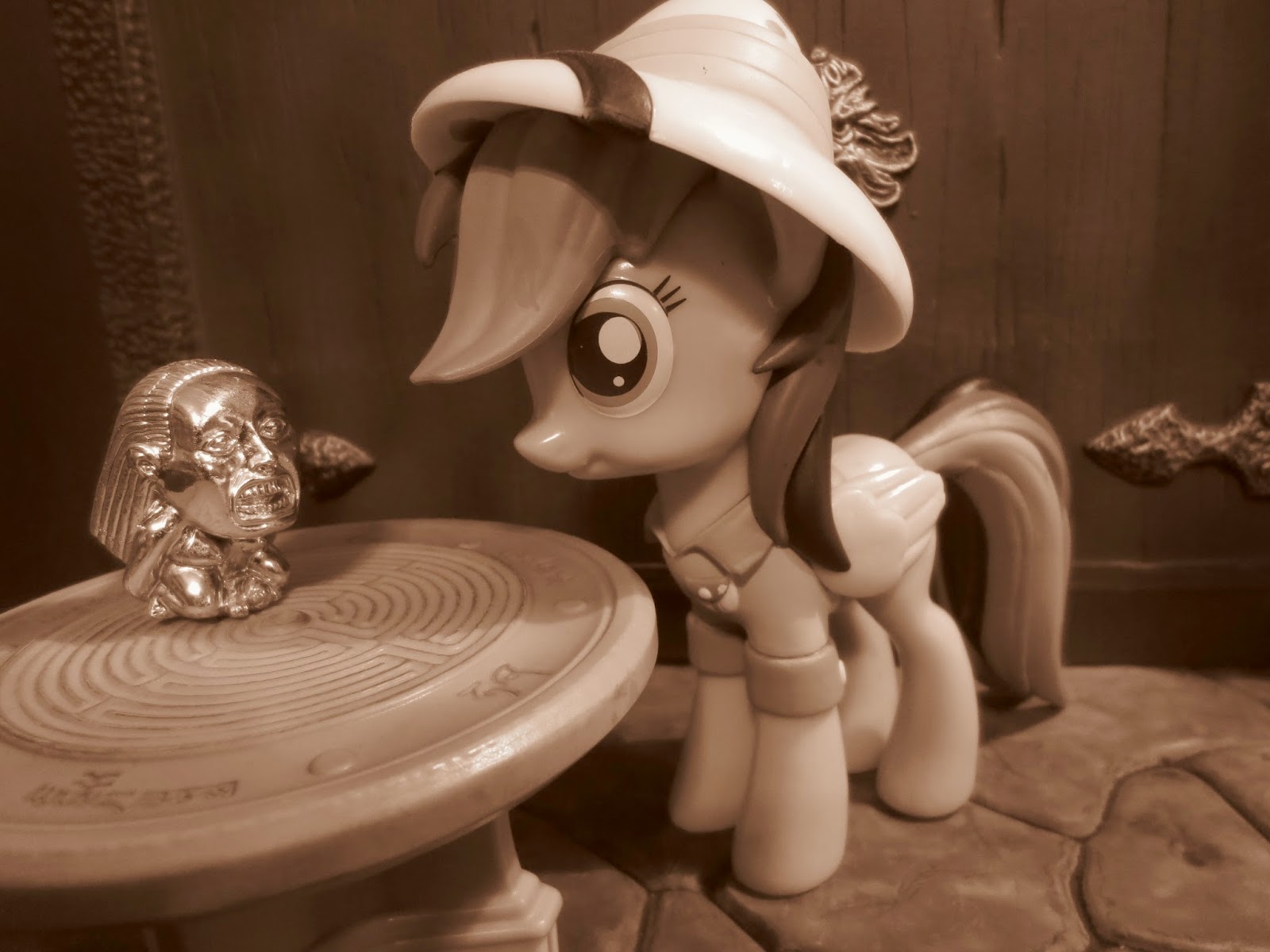 If you're not already a fan of My Little Pony: Friendship is Magic, don't panic! This figure isn't going to convert you to collecting Funko's cool, fan targeted vinyl line or anything but it was a neat inclusion for fans of the show. The Daring Do is an homage to both Indiana Jones and Harry Potter and the star of Rainbow Dash's favorite book series. She wasn't a character I expected to see in this line due to her unique presence that really helps her to stand out. Fun characters like this and nods to other areas of popular culture is definitely part of what makes MLP:FIM such a fan favorite. 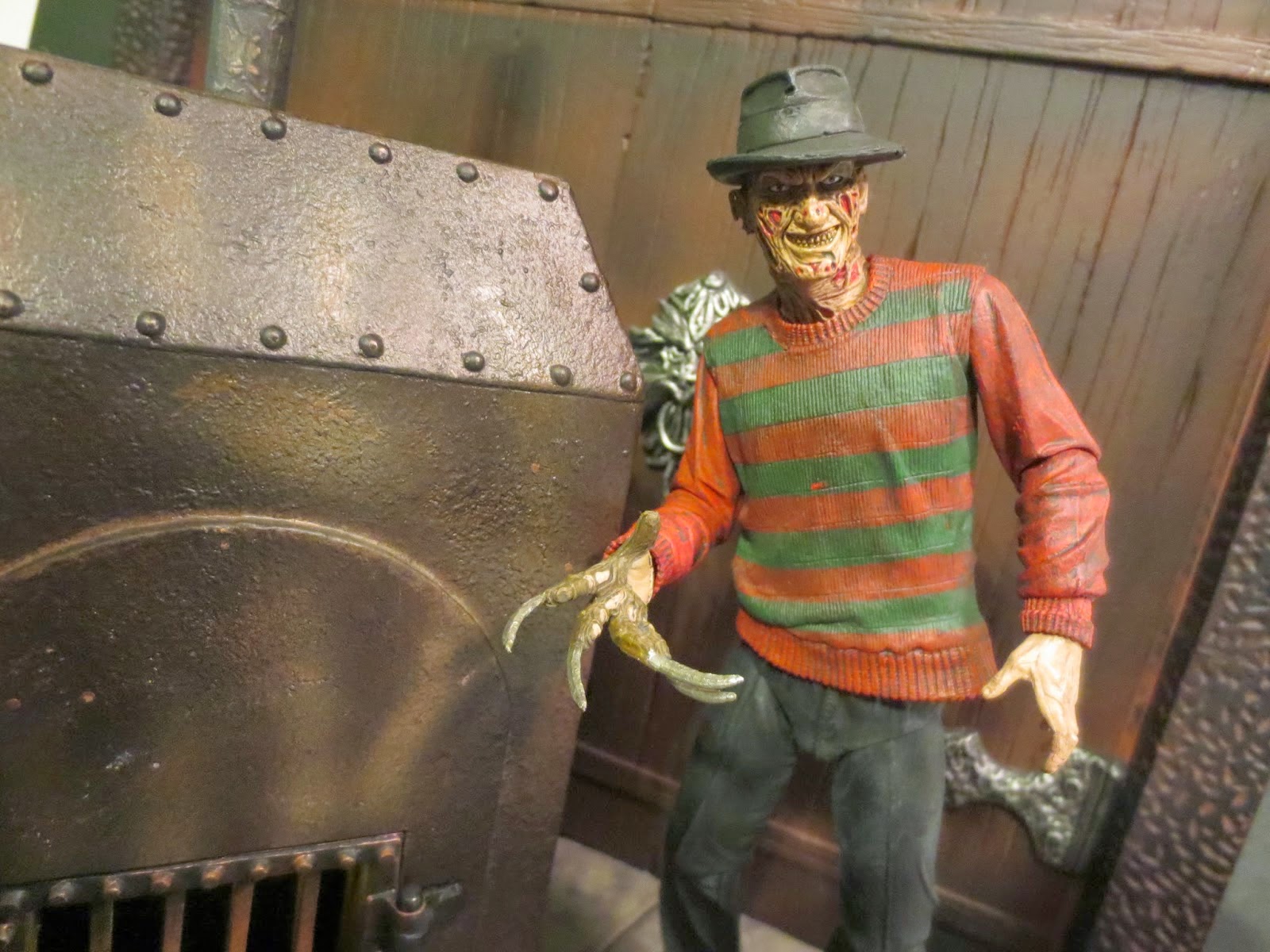 This figure is amazing! It's well designed, durable, excellently articulated, and packed with some truly amazing accessories. This is such a great version of Freddy Krueger, one of the top horror icons of all time, as he appeared in the original 1984 classic horror film. I love the idea of doing deluxe and ultimate boxed versions of popular characters and I really hope that NECA continues this trend.  I cannot say enough how impressed I am with all aspects of this version of Freddy Krueger. There have been lots of Freddy Krueger toys released over the years but this one tops them all.

Link from World of Nintendo by Jakks Pacific 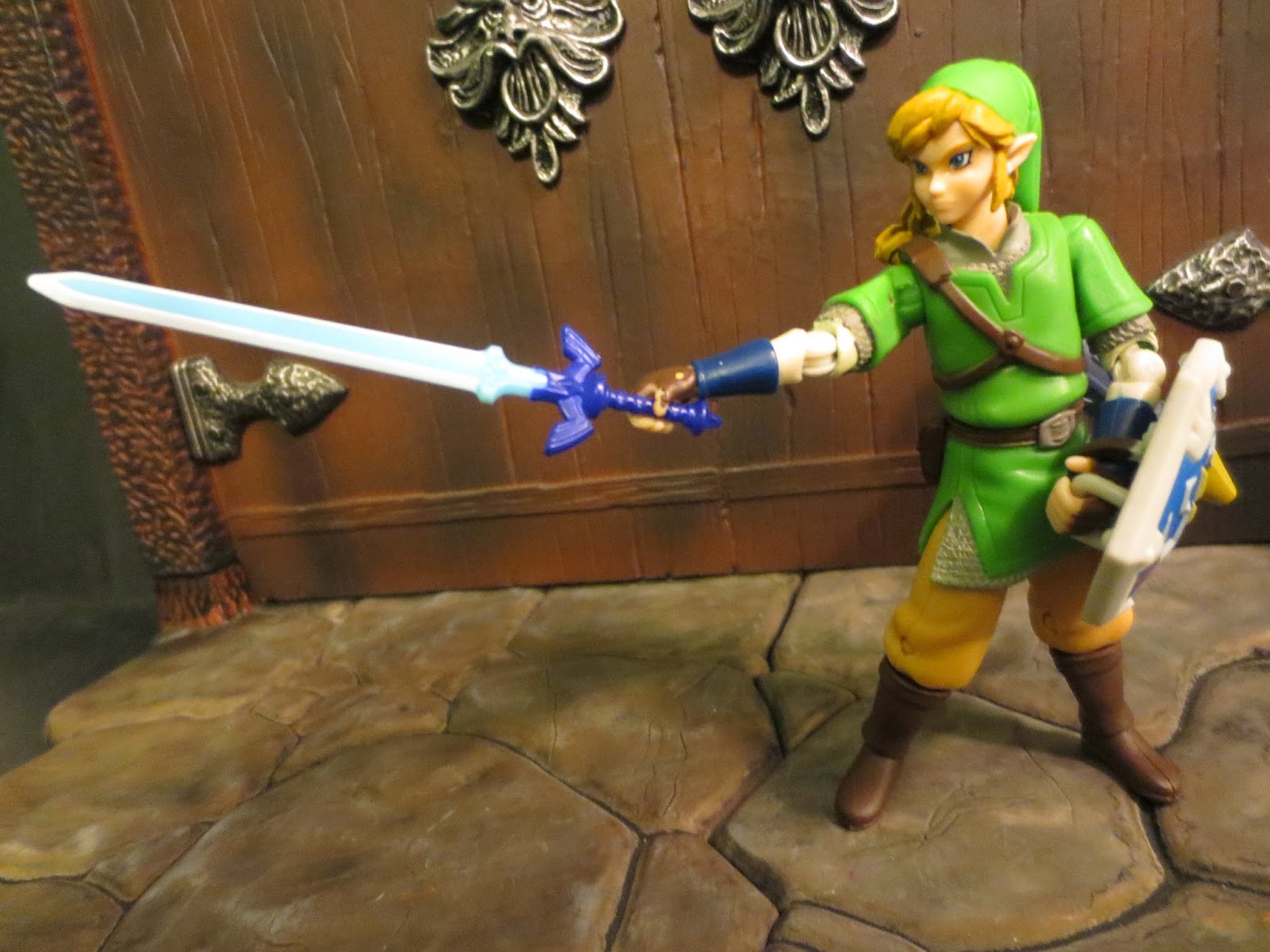 I picked up Jakks Pacific's World of Nintendo line later in the year and I imagine that with lots of figures slated to hit this year, they could be on next year's top 10 lines list. While there have been some deluxe Nintendo characters released by S.H. Figuarts and Figma, keep in mind that this Link is not a $50-$60 dollar deluxe release but a $7-$9 mass market toy, I think you'll be stunned by how good he is. I just cannot describe how excited I was to be able to walk into a Target or Toys 'R Us and pick up this nicely sculpted, articulated, and well accessorized Link figure. For the money, this guy is really a value.


The Penguin (Batman Returns) from DC Multiverse by Mattel 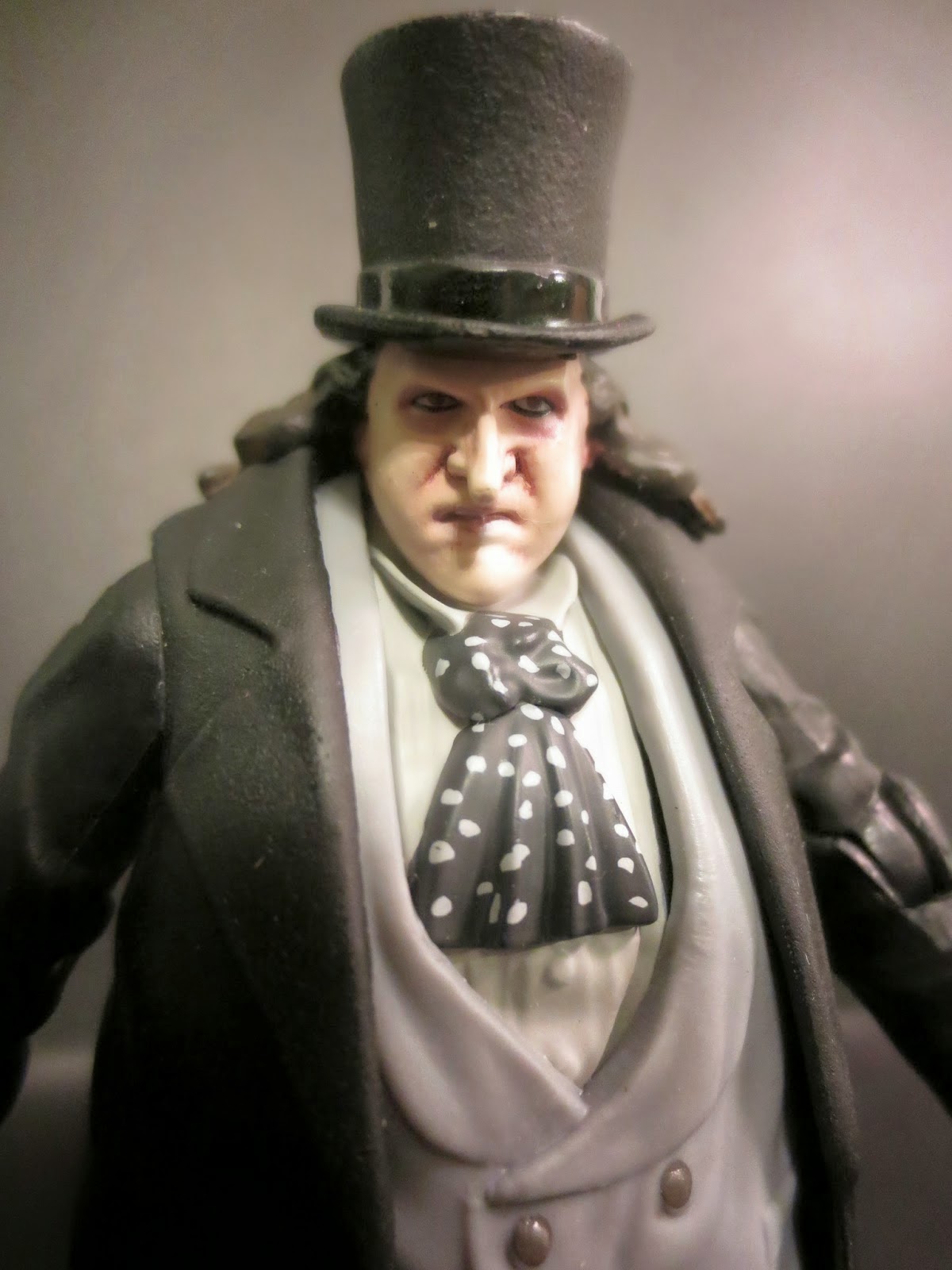 Mattel's DC Multiverse line is pretty shaky if you ask me and I'm not a huge fan of it.  I love the concept of it and the characters they're releasing but I'm really perplexed by the bizarre "slightly larger than 4 inches" scale they've went with. While it's cool having a line that puts figures in different styles together (film and video game based), they really cannot fit in with most other Batman based lines that fans collect. Considering that nearly everything Mattel and DC Collectibles have released have been between 6 and 7 inches, it just seems almost cruel to not release a long awaited character like the Penguin in that popular scale. Still, I can't ignore the fact that this figure is incredibly impressive. The sculpt and paint work are just stellar and far better than anything Mattel has ever done in this scale. I'd definitely wager this is the best work in this scale that Mattel has ever done and would put it alongside the best work of Hasbro, the (former) undeniable kings of the 1/18th scale. While I have my complaints about size, there's no doubt this is the Penguin figure I wanted as a tot back in 1992. 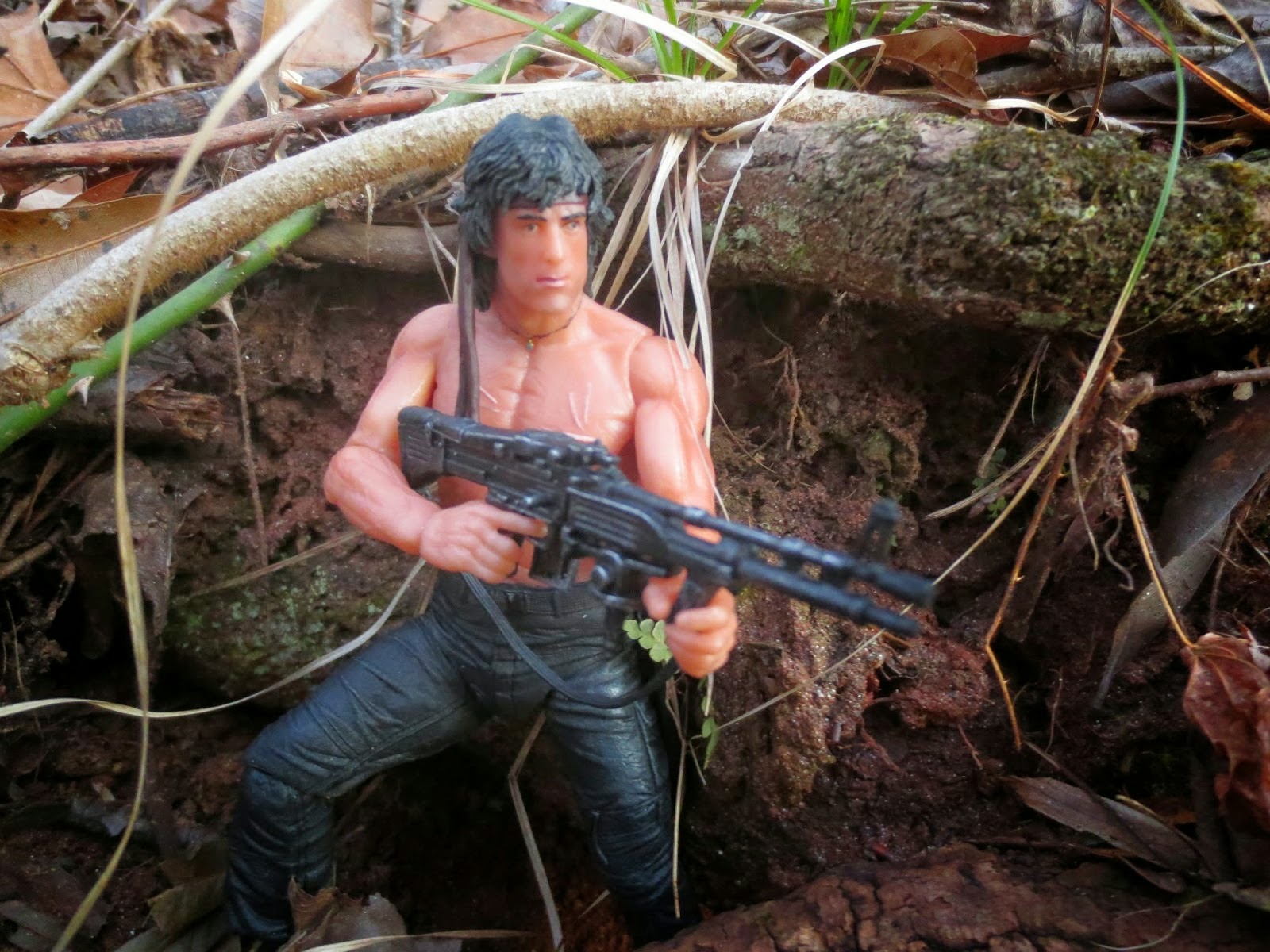 Last year NECA released two Rambo figures in their Rambo line. This year we only got one so it didn't make sense to put Rambo in my ten best lines list. That's what the best individual figures list is for, though, and here's old Sly Stallone as everyone's favorite Commie fighting patriot. This is a great figure with solid articulation, cool accessories, and some excellent paintwork. It's also a figure that I think many folks have been clamoring for forever. This is definitely Rambo's most iconic look and who doesn't want a toy of that? NECA has definitely increased the number of Sylvester Stallone action figures on the market over the past few years and for that they deserve our deepest thanks. 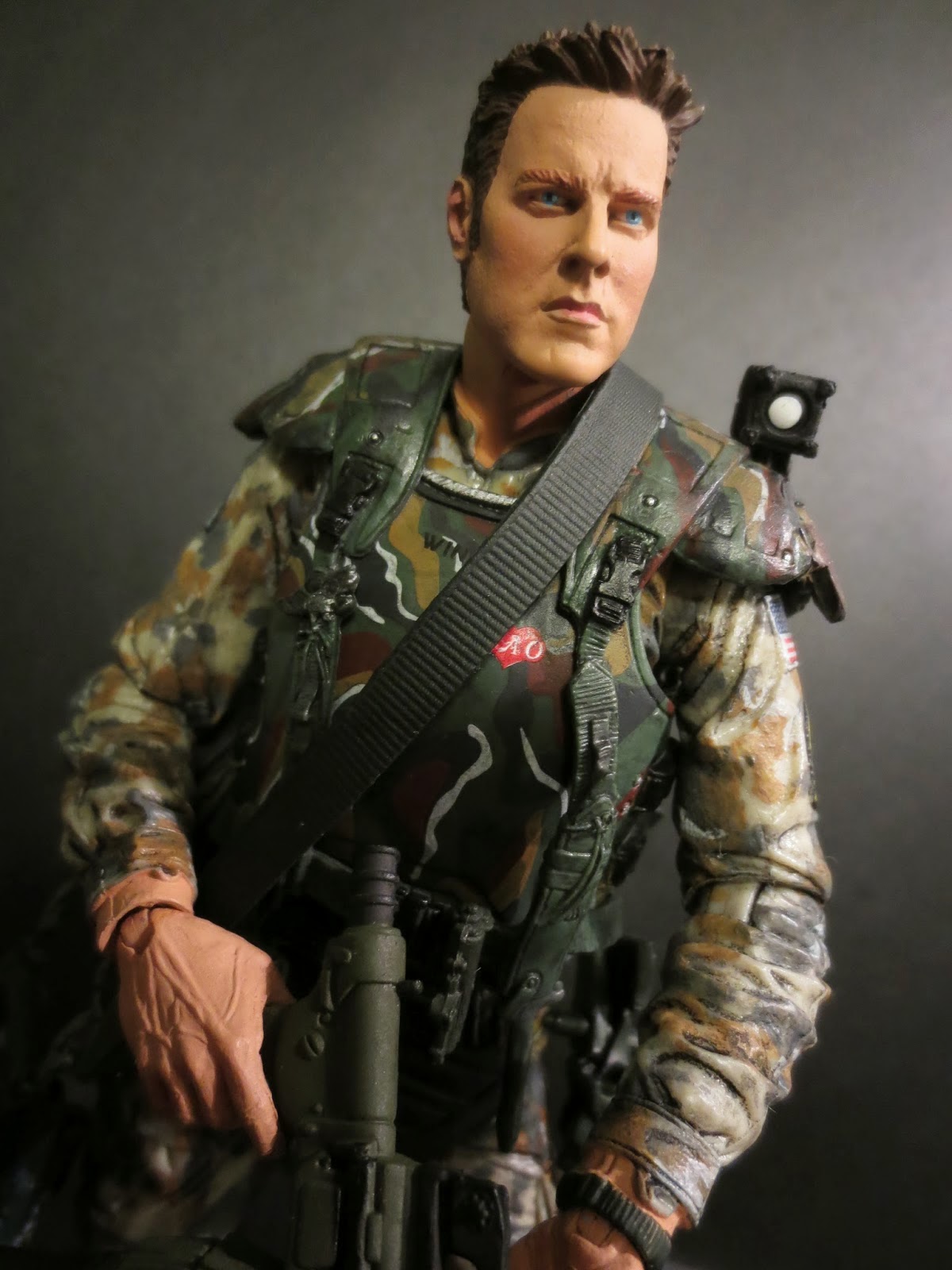 Who is Sergeant Craig Windrix? Did you somehow missing while watching Aliens on LaserDisc for the 356th time? Nope, he\s definitely not a character you'll see in the film Aliens; he's a new character with a backstory that is simultaneously touching, awesome, and heartbreaking. Sgt. Windrix is based on an actual man: Craig Windrix, the brother of NECA sculptor Kyle Windrix. The figure was revealed at Preview Night of SDCC 2013 and we quickly learned that Craig Windrix was a friend of the good folks at NECA who was battling Stage 4 Stomach Cancer. Since Craig was an Aliens fan, NECA worked with Fox to get permission to create this figure to honor their friend and to give collectors another awesome Colonial Marine to add to their shelves. Unfortunately Craig lost his battle with cancer last year shortly before the figure was released. On NECA's Twitter page, an individual named Frankie J Ives commented, " Craig Windrix is the best marine produced for this line. His face is completely fearless. What a tribute." I have to agree. Not only has NECA continued to refine their technically excellent Aliens line here but they've also made a figure that is injected with love, heart, and soul. Windrix really does look awesome and fearless. I can't help but love this figure. It's great as a toy and great as a tribute. NECA has really done everything they possibly can to make both the Aliens line and this figure extremely special. Thoughts and prayers go out to the Windrix family and major respect goes out to NECA for being quite clearly one of the best companies in the business. Stay frosty, Sgt. Windrix. 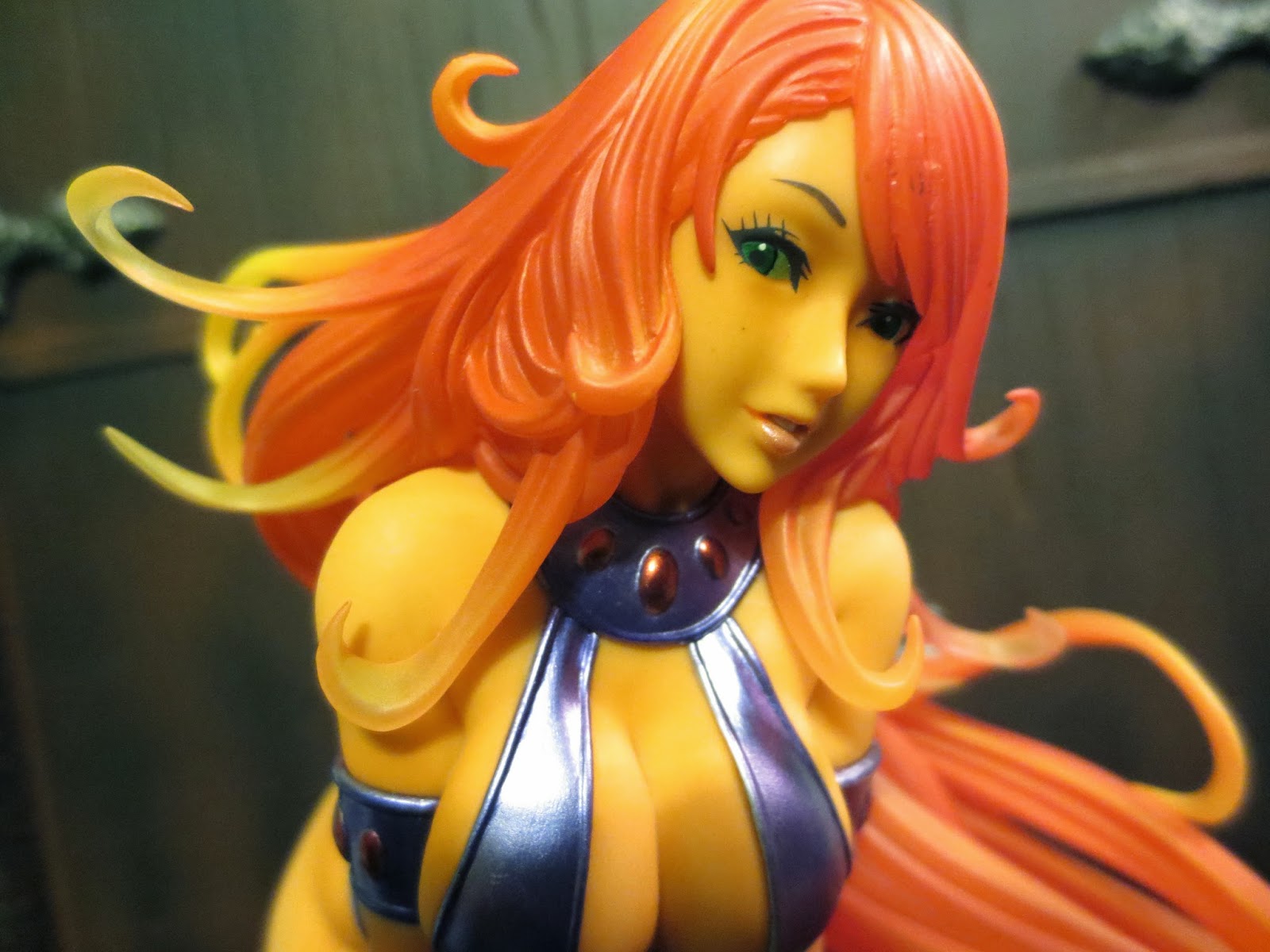 While Kotobukiya has been on a bit of a lull with their DC Comics Bishoujo statues over the past year or so (where's that Black Canary they teased at Toy Fair two years ago!) they seem to be getting back into the groove. Batwoman is already starting to hit, Zatanna is scheduled for release in August, some concept art of Raven has just been shown over the past week, and Starfire here was just released back in October or November. These are nonarticulated statues but they're gorgeous. The sculpts, the colors; everything just works together so well to create some very appealing figures of the lovely ladies of the DC Universe. Kotobukiya does some excellent work with this line and I'm excited to see them jumping back in to hopefully offer us plenty of releases in the future. P.S.: Please rerelease Supergirl and Catwoman! My shelf feels incomplete without them!


And now for some stats!

# of action figures from DC Collectibles: 1


# of toy that are newer versions of toys I played with as a kid: 6 (Batman, Anarky,and Penguin - Batman Toys, Sgt Windrix- Kenner and Galoob Aliens product, Rambo- Coleco's Rambo and the Forces of Freedom, Link- those little Nintendo PVCs from the late 80s.)


# of toylines based on new intellectual properties (first appearing in 2014): 0


# of toys that I never saw hide nor hair of at Wal-Mart: 9- I only ever saw the Penguin.


# of toys appearing from lines that I was a completist on: 2 (Rambo and World of Nintendo)


# of toys from lines featuring someone who was a co-owner of Planet Hollywood: 1- Rambo

# of toys from lines that were available through Kickstarter or an online subscription method: 0

# of toys from lines in a 1/18th scale or smaller: 1 (Penguin from DC Multiverse)