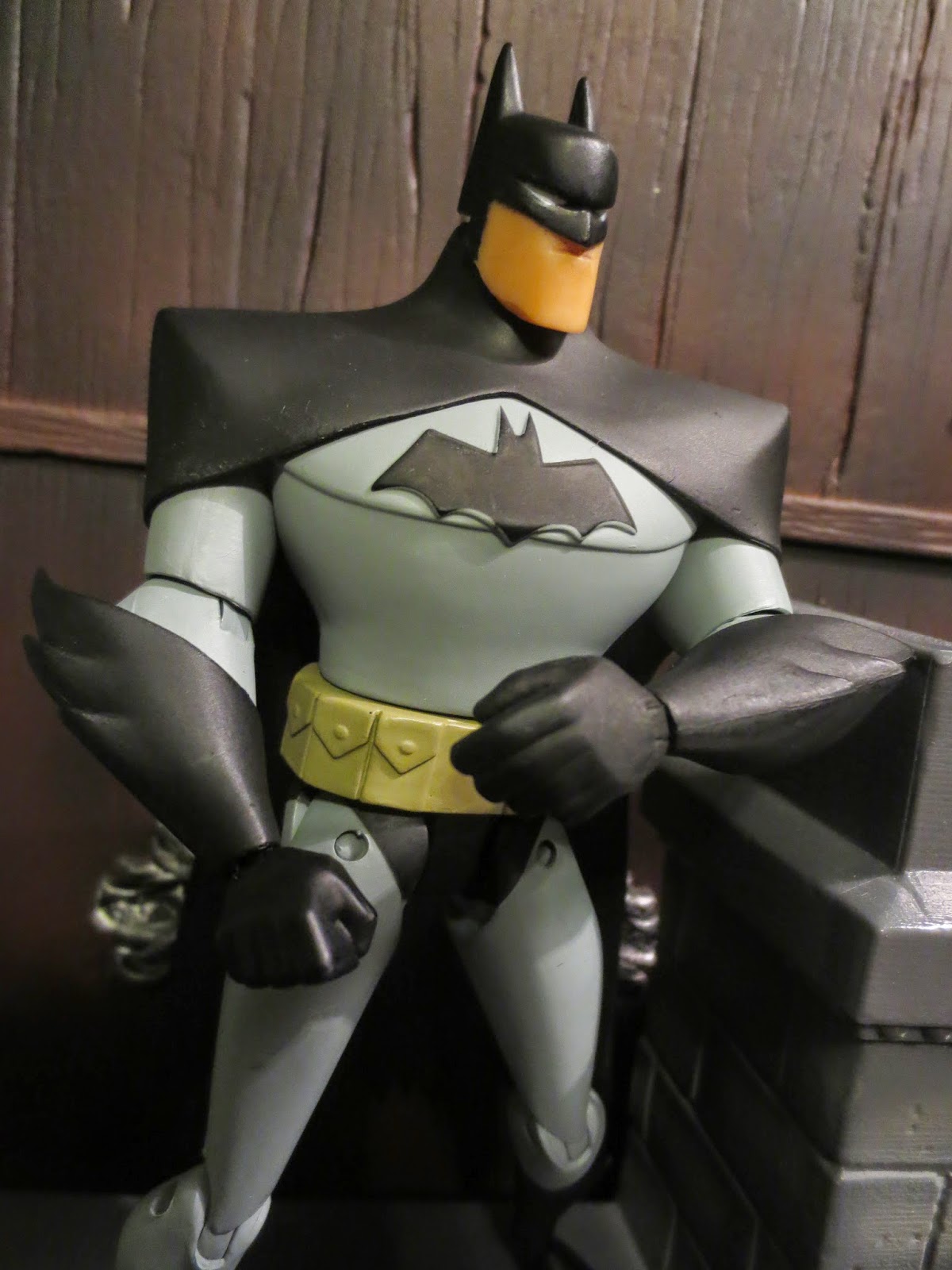 *What exactly is this toyline called? The packaging differs slightly between the Batman: The Animated Series releases and The New Batman Adventures releases. Should I list them as two separate lines under the show names or under one name as Batman Animated? Let me know what you think!*

Ever since Mattel's DC Universe Classics started dying off, DC Collectibles has really been ramping up their efforts in offering a wide range of action figures that interested fans. Of course Batman has been the recipient of the greatest amount of figures but it was still a great surprise last when DC Collectibles showed off their new action figure line based on the two dominant Batman cartoons of the 1990s: Batman: The Animated Series and The New Batman Adventures. While Kenner released a fairly robust line of action figures from those cartoons during the 1990s, DC Collectibles' new line is in a 6 inch scale with plenty of different characters (and fewer Batman variants). Today I'm looking at the first figure released, Batman. This figure represents Batman as he appeared in The New Batman Adventures, the follow-up series to Batman: The Animated Series which ran from September 1997 to January of 1999 (the B:TAS version will be released at a later date). Ready for a look at this Bruce Timm inspired action figure of everyone's favorite Dark Knight? Then join me after the break... 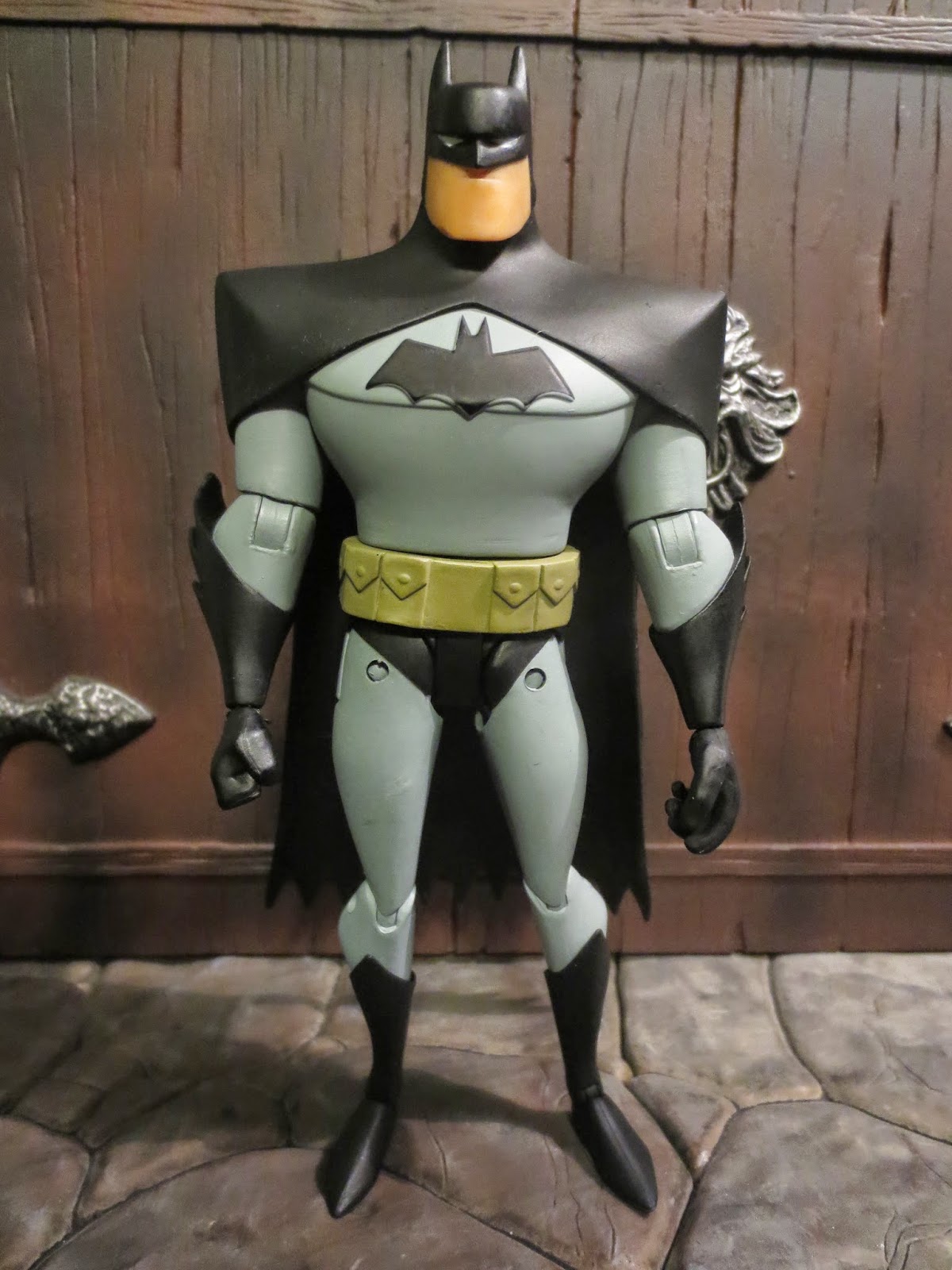 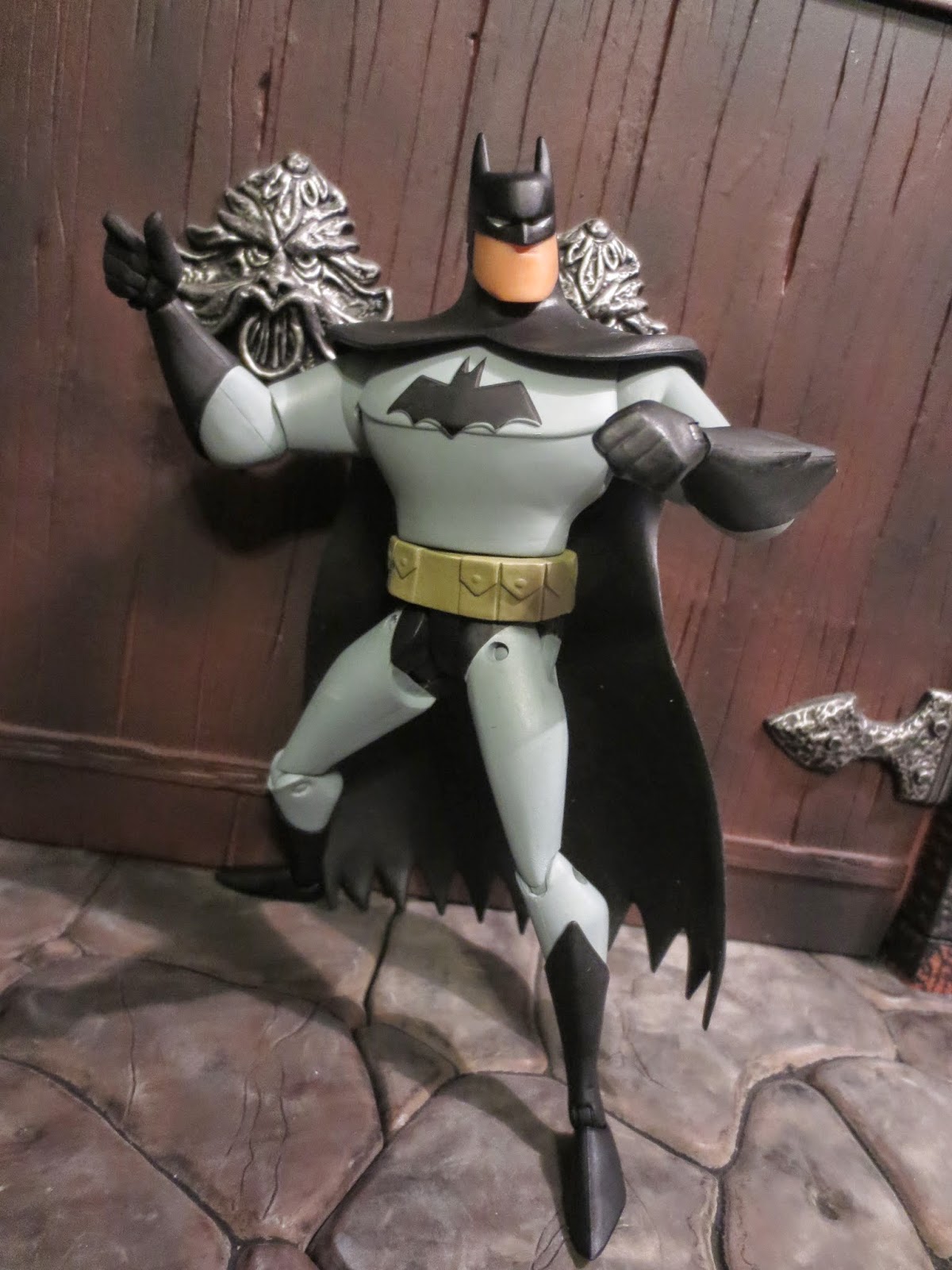 Before getting too far into the review, I want to acknowledge that there have been plenty of reported and documented quality control problems with these figures. While this seems to have affected Catwoman and Mr. Freeze more than Batman and Two-Face, DC Collectibles has acknowledged the problem and seems to be taking some concrete steps to fix it. I haven't had any problems with my Batman yet as he seems to be fairly well made. Articulation is going to be a challenge with these figures due to their sleek, slender builds. Batman's ankles and knees are tiny! Still, there's a nice amount of articulation here. It sometimes looks a little wonky when in extreme poses but overall it looks great when in more static poses. While I'm not a fan of the H-hinge style hips that DC Collectibles is using here, they do offer a nice range of motion. These definitely seem like they will be fun figures as Batman is an excellent and fun figure to pose and play with. 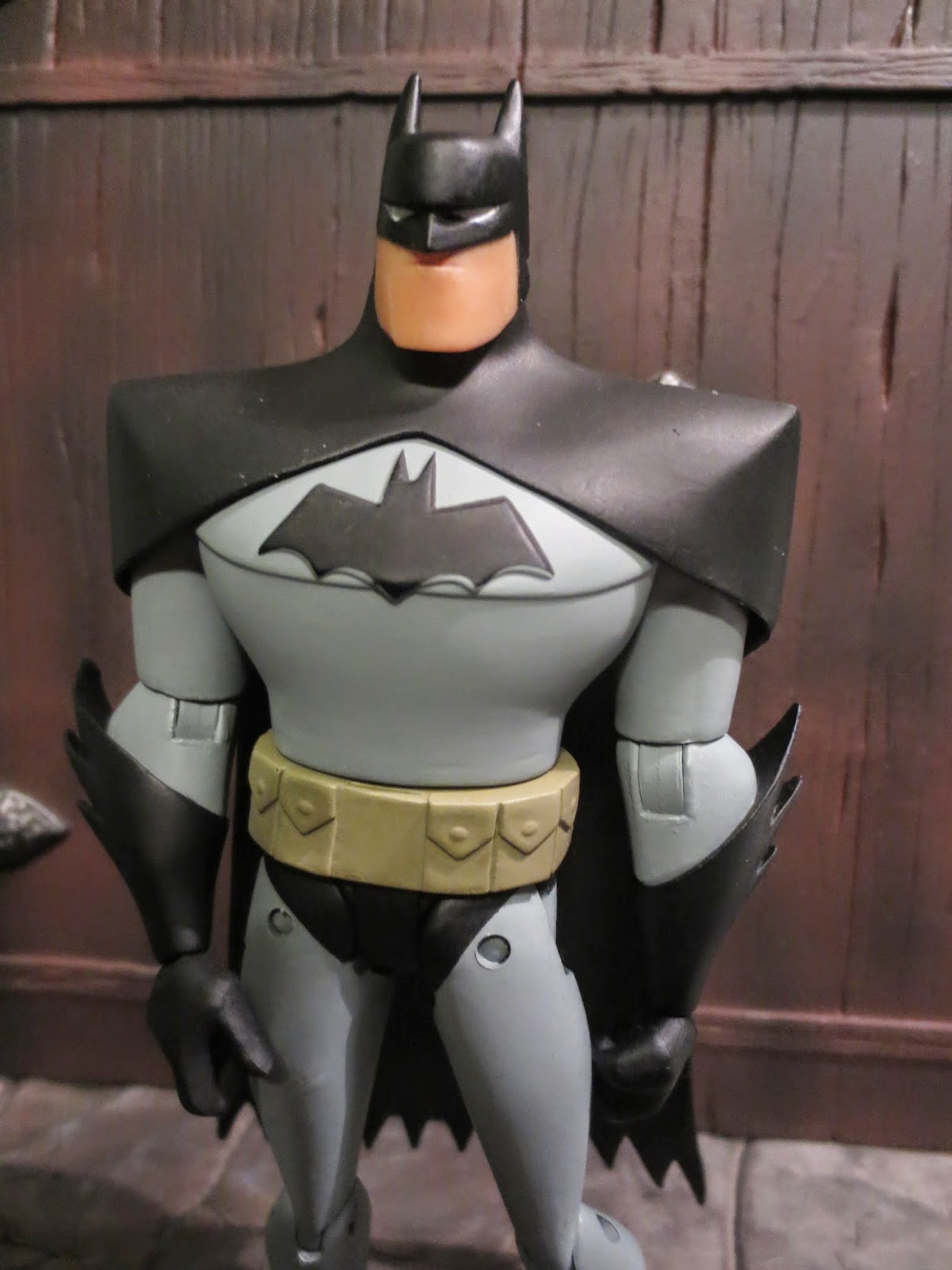 As mentioned above, this sculpt perfectly captures Batman as he appeared on The New Batman Adventures. The biggest and most recognizable difference in the TNBA design from the B:TAS design is that Batman appears sleeker with smaller legs and a less noticeably muscular chest. While the B:TAS Batman looked beefier with some defined torso muscles, this Batman only has some loosely defined pecs. He's not shrimpy looking by any means (his arms and chest are huge), there's just less muscle definition. The batsymbol on his chest is also a stylized bat versus the more traditional yellow and black oval. It's actually a sculpted element rather than just a painted stamp. Bruce's head looks great with that familiar chin that gives Bruce Campbell a run for his money. Other little details such as the spikes on his gloves, the pouches on his utility belt, and the flares on his boots all match the animation model well. This is a great TNBA sculpt for old Bats, no doubt about it. 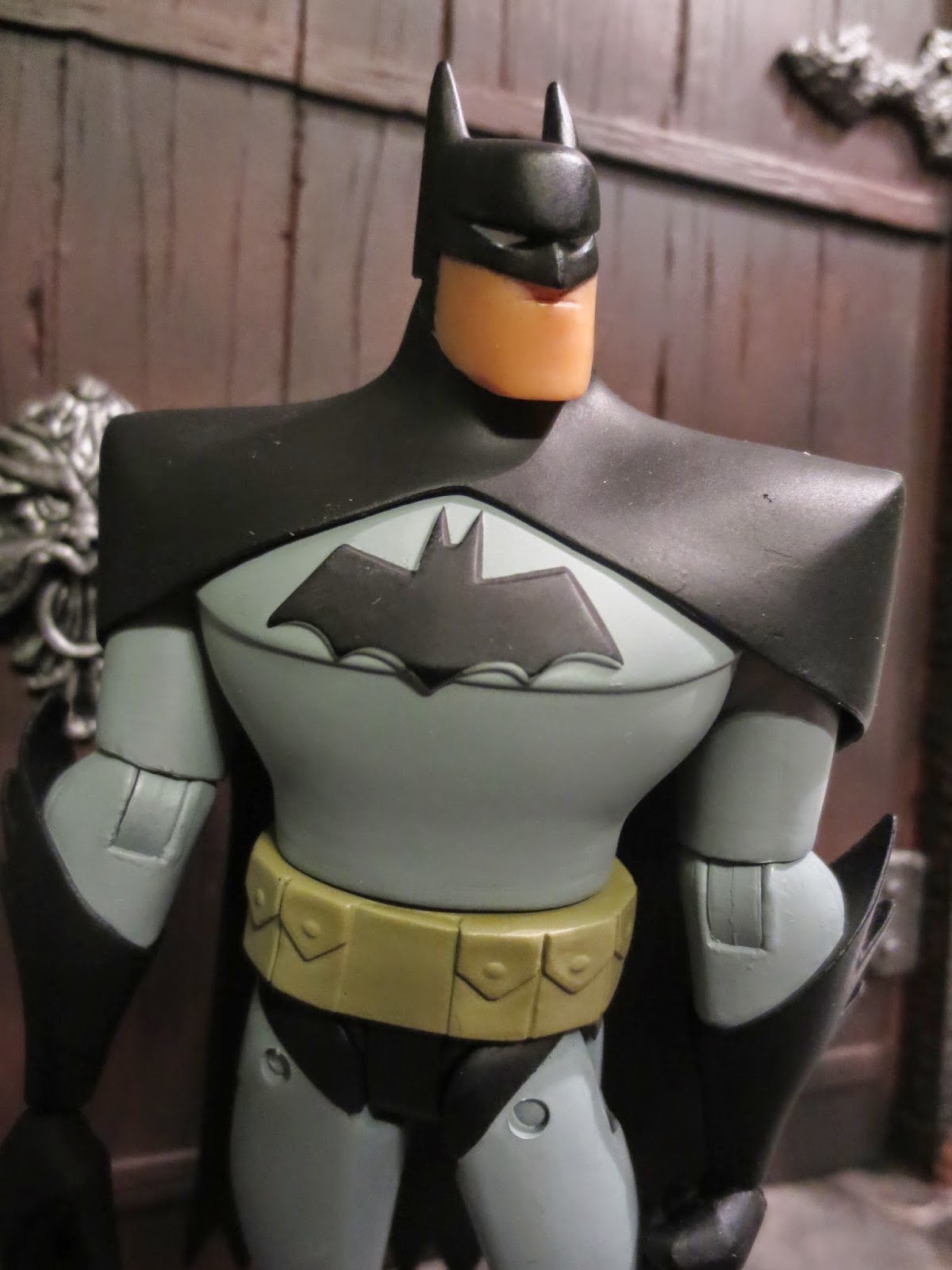 Batman's color palette is pretty simple: Gray and black. Yeah, his face, eyes, and utility belt are all their correct colors, but overall this guy is covered in gray and black. It's a great Batman look that is very visually appealing and manages to look dark and pulpy without being an all black outfit or using the blue "shadow effects" seen on the show. The only complaint I have is that the bottom edges of the batsymbol on the chest aren't fully painted. It's not noticeable from a distance but up close I find it a bit distracting. Overall, though, DC Collectibles did a nice job here in capturing the colors of the character on the show. 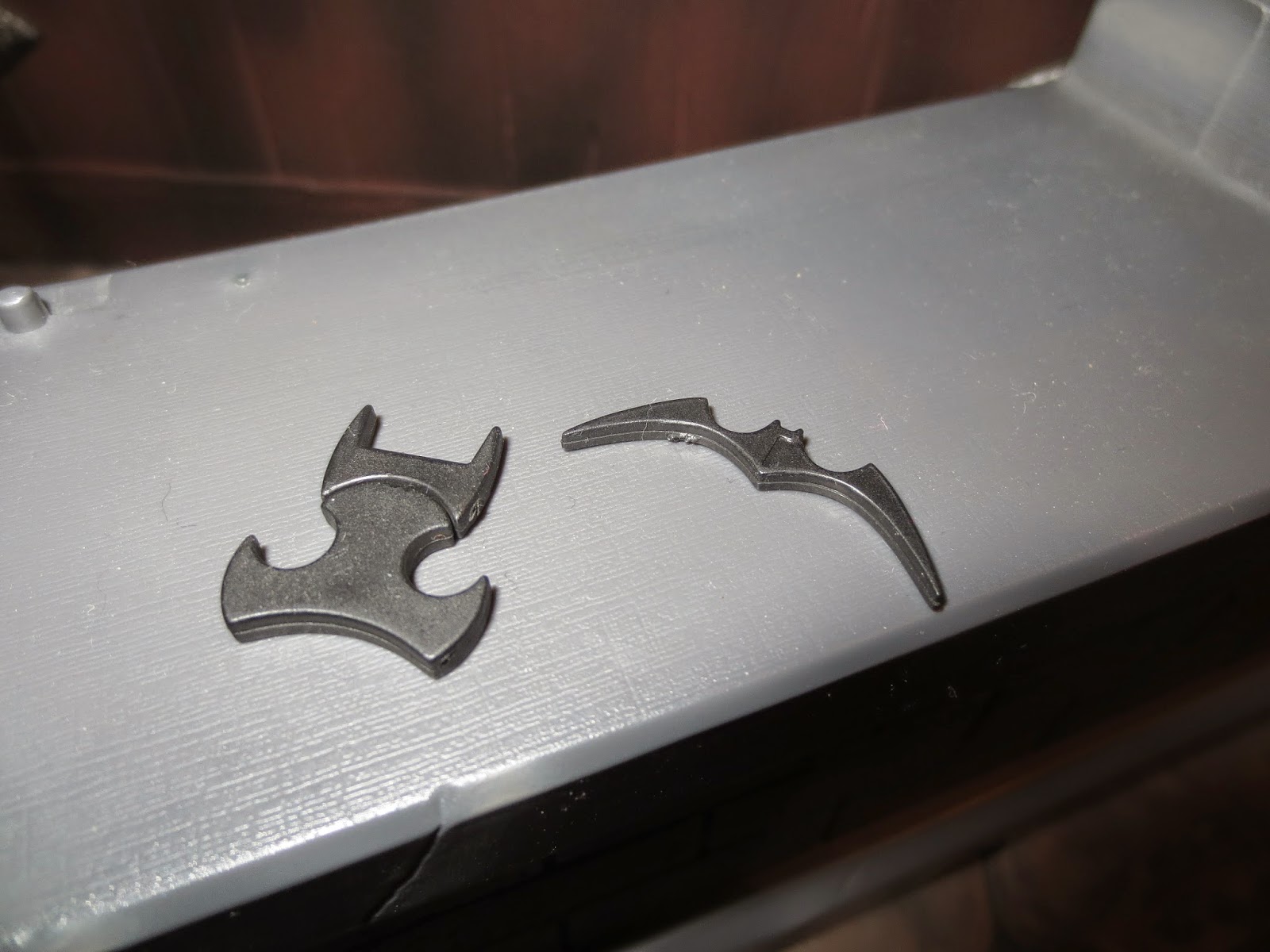 In talking about the figure itself I think I've already gushed about how well done it is. Ready to see how this figure takes things to the next level? |Check out the wealth of accessories in "The Facts" section above. Holy hand grenades! That's a lot of stuff! The two traditional accessories are Batman's grapnel gun and a batarang. They're simple pieces but they look great. The grapnel gun even has a removable tip. That's more stuff than most Batman figures in the past have included! But wait, there's more... 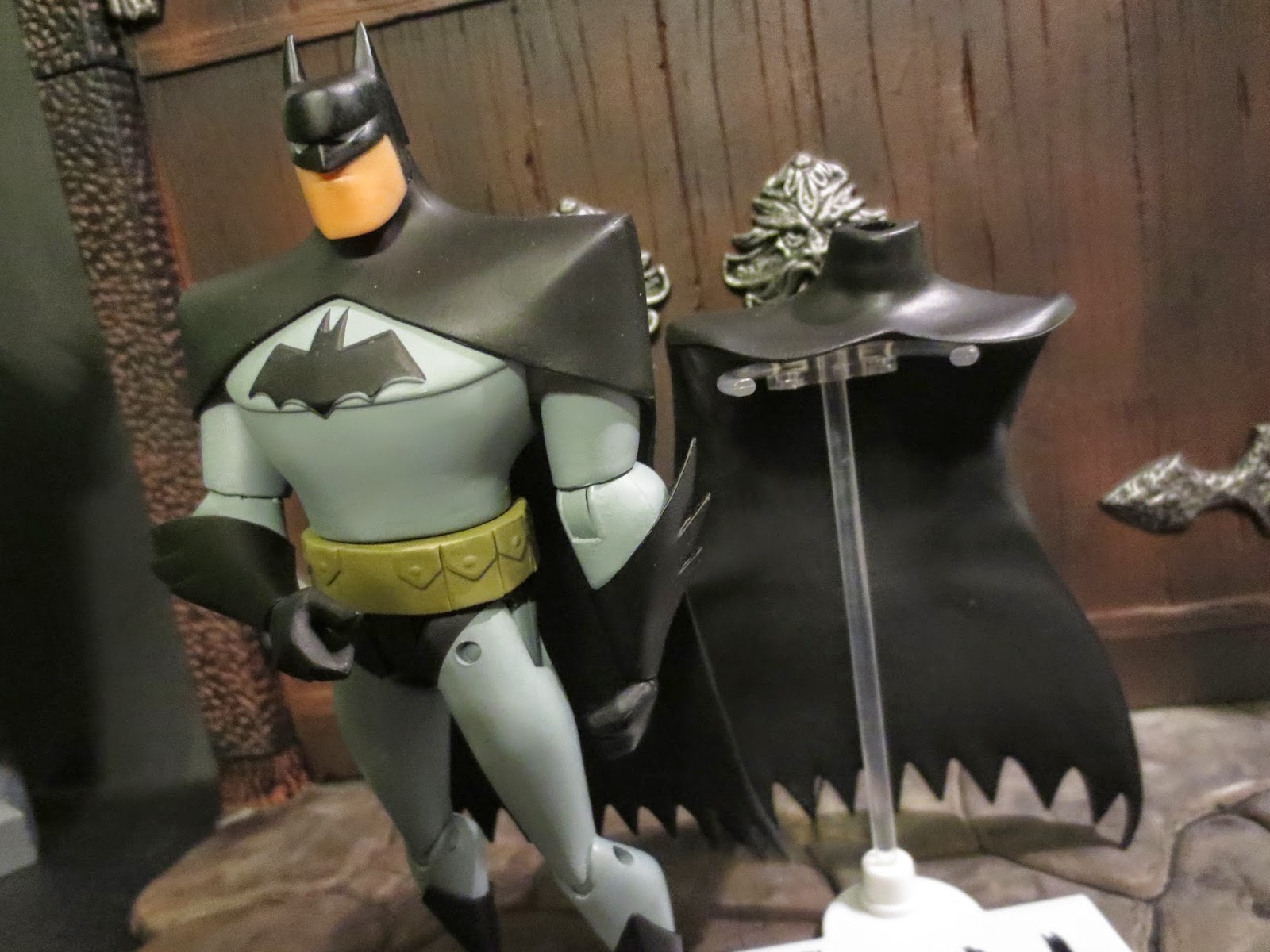 One of the craziest things DC Collectibles included in this set are two swappable capes. While one cape is rather static and sits flatly over Batman\s shoulders, the other is a bit more dynamic. The mantle of the cape is pulled back a bit to allow for more shoulder movement and the bottom of the cape looks a bit more windswept. I would have never even thought of including something like this as an accessory but it sure does aid in giving Batman a bit more variety when posing him. 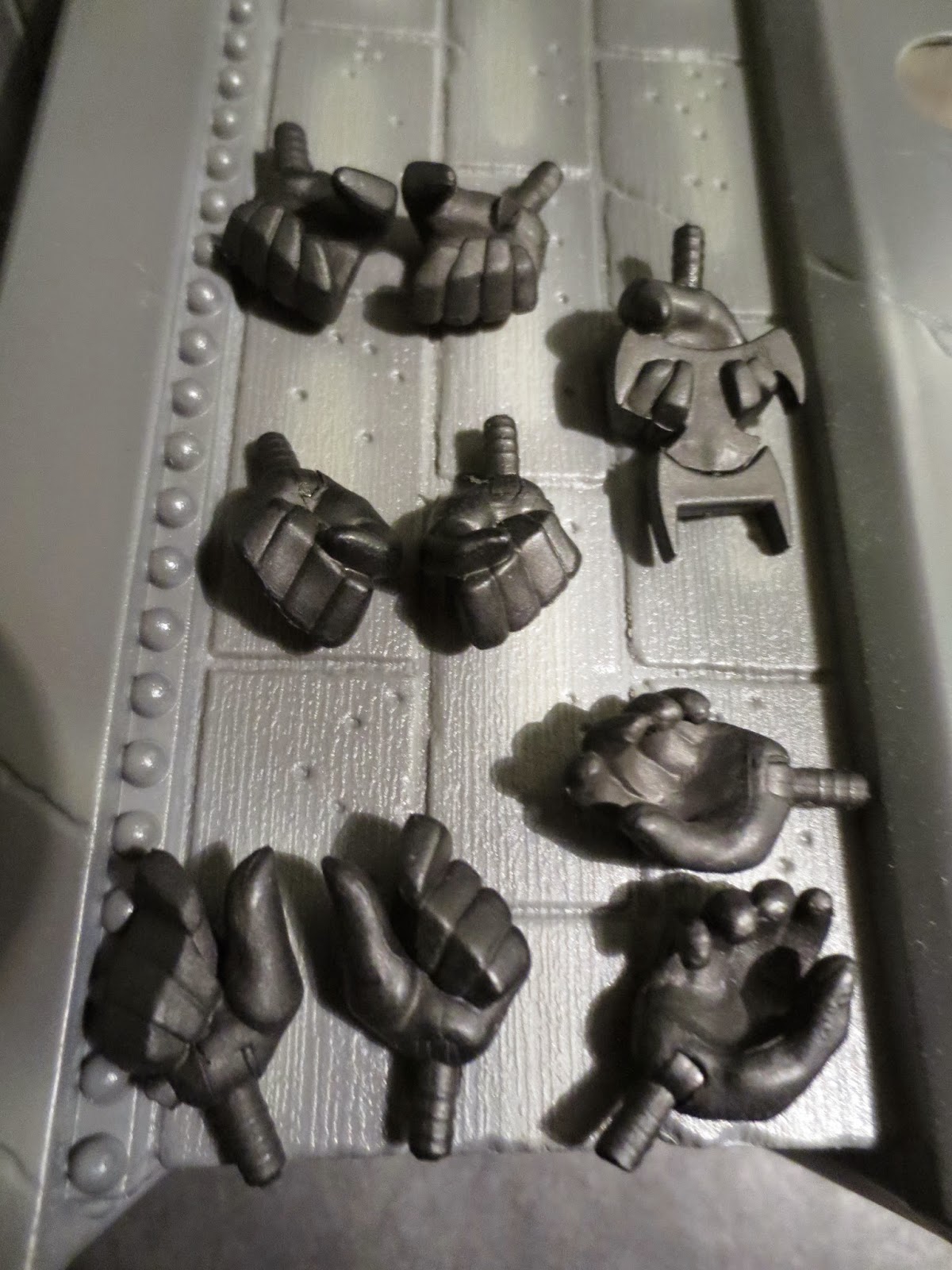 The same can be said for the amount of extra hands Batman comes with that can easily be swapped in and out. There are nine hands: A pair of fists, a pair of relaxed grips, a pair of C-grips (thank Kung-Fu grip), a pair of batarang throwing hands (where the batarang slips in to the top of the hand), and a hand with a grapnel gun permanently attached. It\s tough to get the standard grapnel gun in Batman's hands so DC Collectibles included one with the grapnel permanently attached. That's great because not only do you have a better look for the figure but you have an extra grapnel gun for another Batman figure or for a Batcave display. By the way, the tip of the grapnel is removable on this gun as well. I've had no problems swapping the hands in and out: Just be cautious, use gentle, even pressure, and use the boil and pop method if you've got a problem. 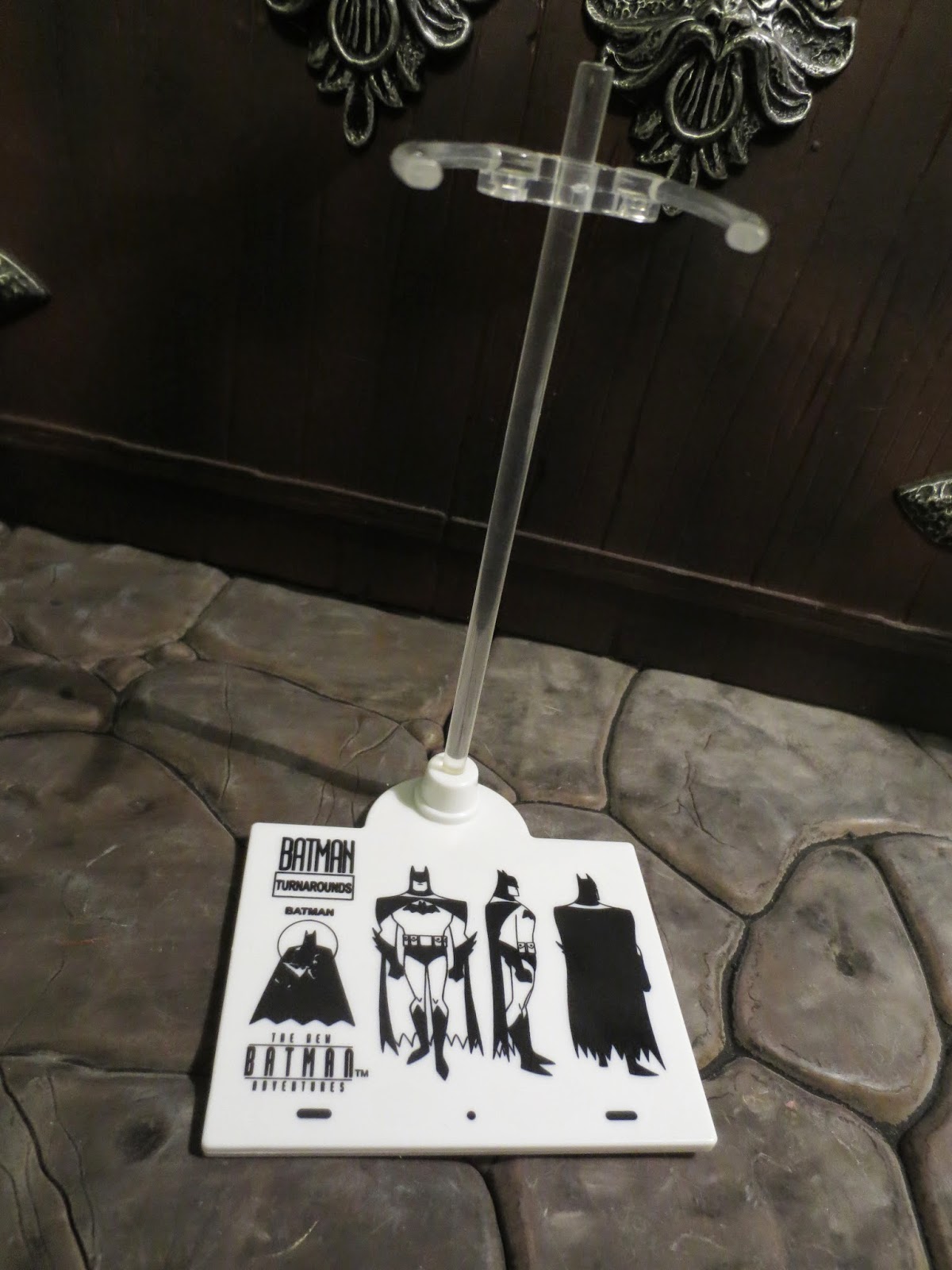 Last, but certainly not least, it a really nice stand. While Batman can stand on his own his design does cause him to be somewhat prone to being knocked over. Fortunately, DC Collectibles has included some of the best action figure stands I've seen in recent memory with each figure in this series. The flat base that the figure can stand on is covered with cool art of the respective character and the character's name. Attached solidly to the base is a clear plastic rod with a clip that allows you to hold the character at the waist. These work really well and look great, much better than a stand that utilizes just foot pegs. 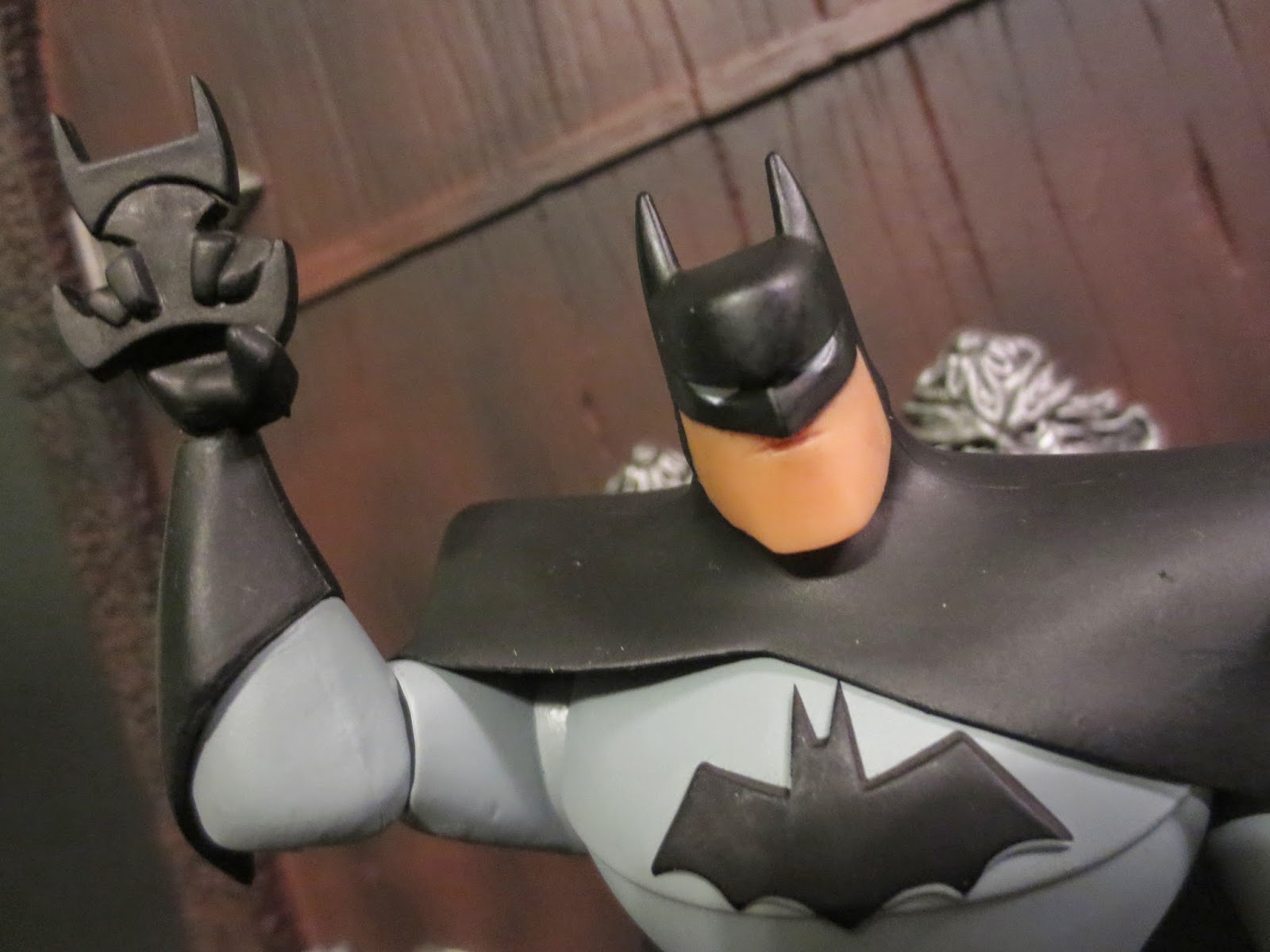 I'm really, really happy with this guy. I held off for a month or two because I was concerned about the breakage issues but after seeing plenty of good reports on Batman and how DC Collectibles is handling the problems, I finally decided to jump in. I'm glad I did. The animated Batman cartoons are definitely up there on my list of favorite Batman interpretations ever and I'm really anticipating collecting this line. With the diverse cast of characters spread across two different shows, DC Collectibles could have the next hot line on their hands. I'm glad to see they really seem to be focusing on quality at this point. And quality is what anyone who picks up one of these figures will probably see. The sheer amount of thought put into the design of the figure and its accessories is staggering. Nine hands? Swappable capes? Functional and decorative stands? Just fantastic stuff. My only real problems with this figure are the not fully painted batsymbol and the unsightly hip joints. Overall, I'm giving Batman a Great 1/2 due to the sheer amount of extras and the great design. He's an extremely impressive Batman figure and, if you need a reason to pick up another Batman figure, this is it. 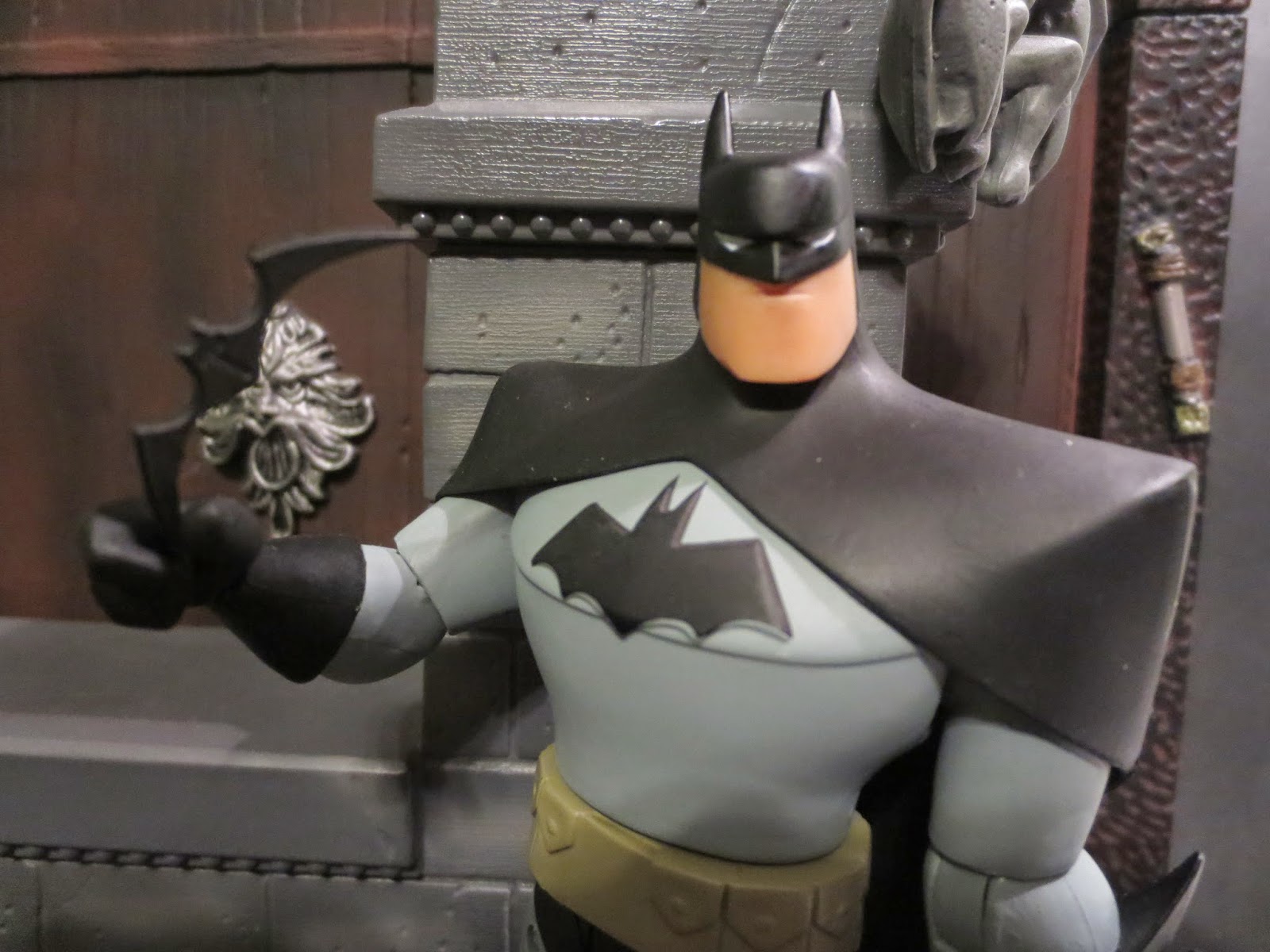 I've reviewed a ton of Batman figures from a variety of different toylines, including: 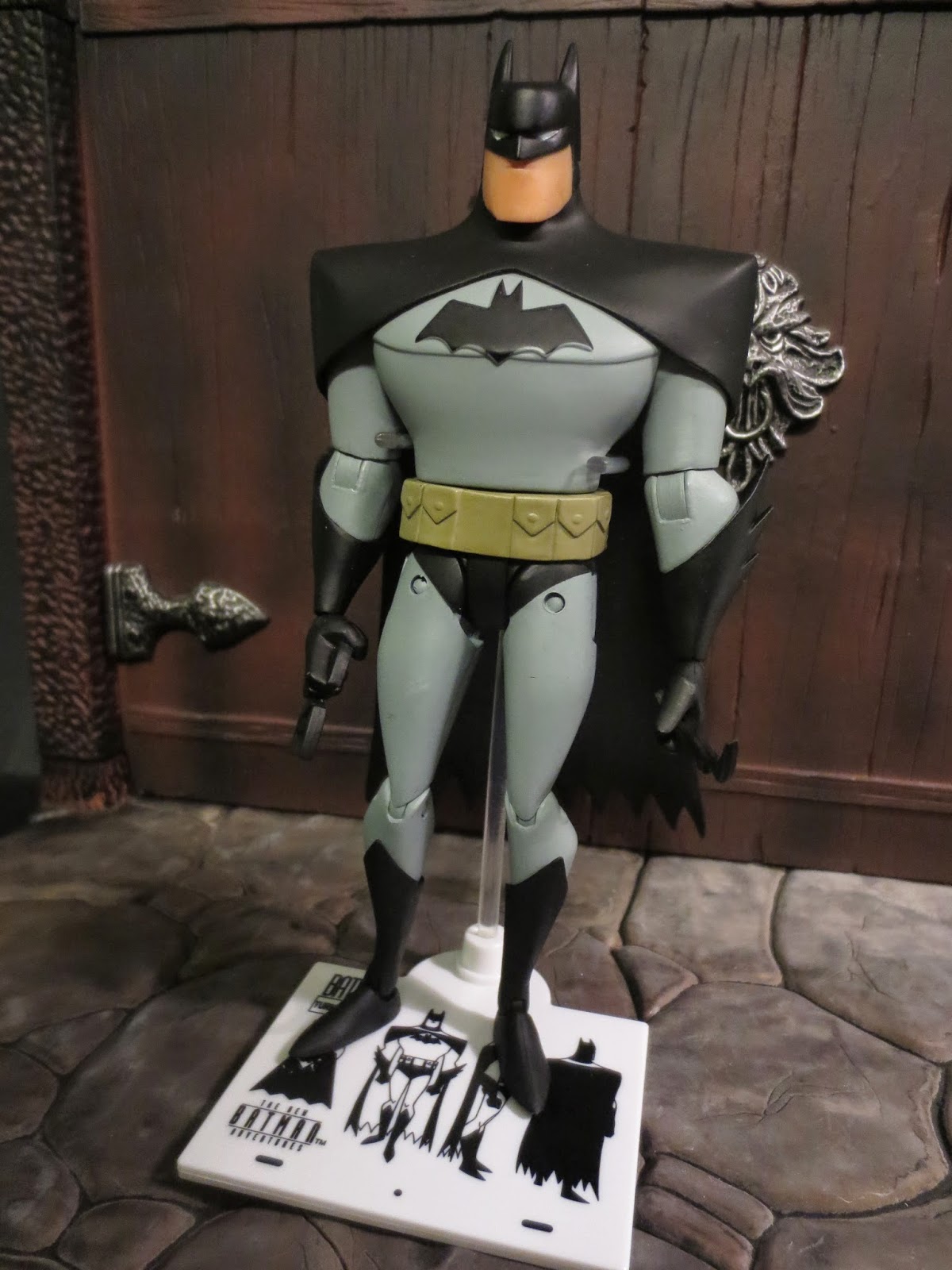 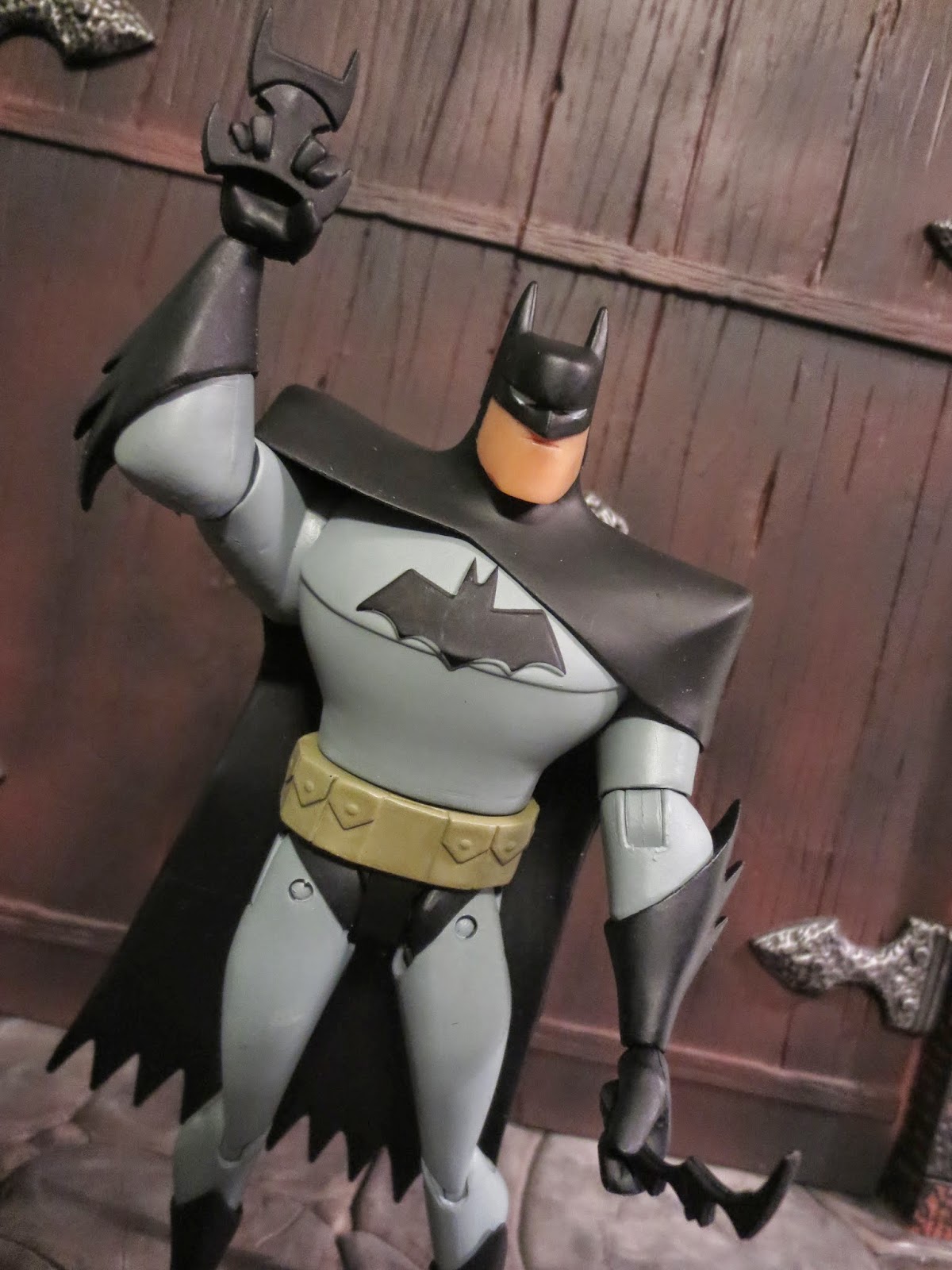 Young Justice: Invasion by Mattel
Batman
Posted by Barbecue17 at 2/17/2015