Action Figure Review: Lizard Man from Masters of the Universe Classics by Mattel 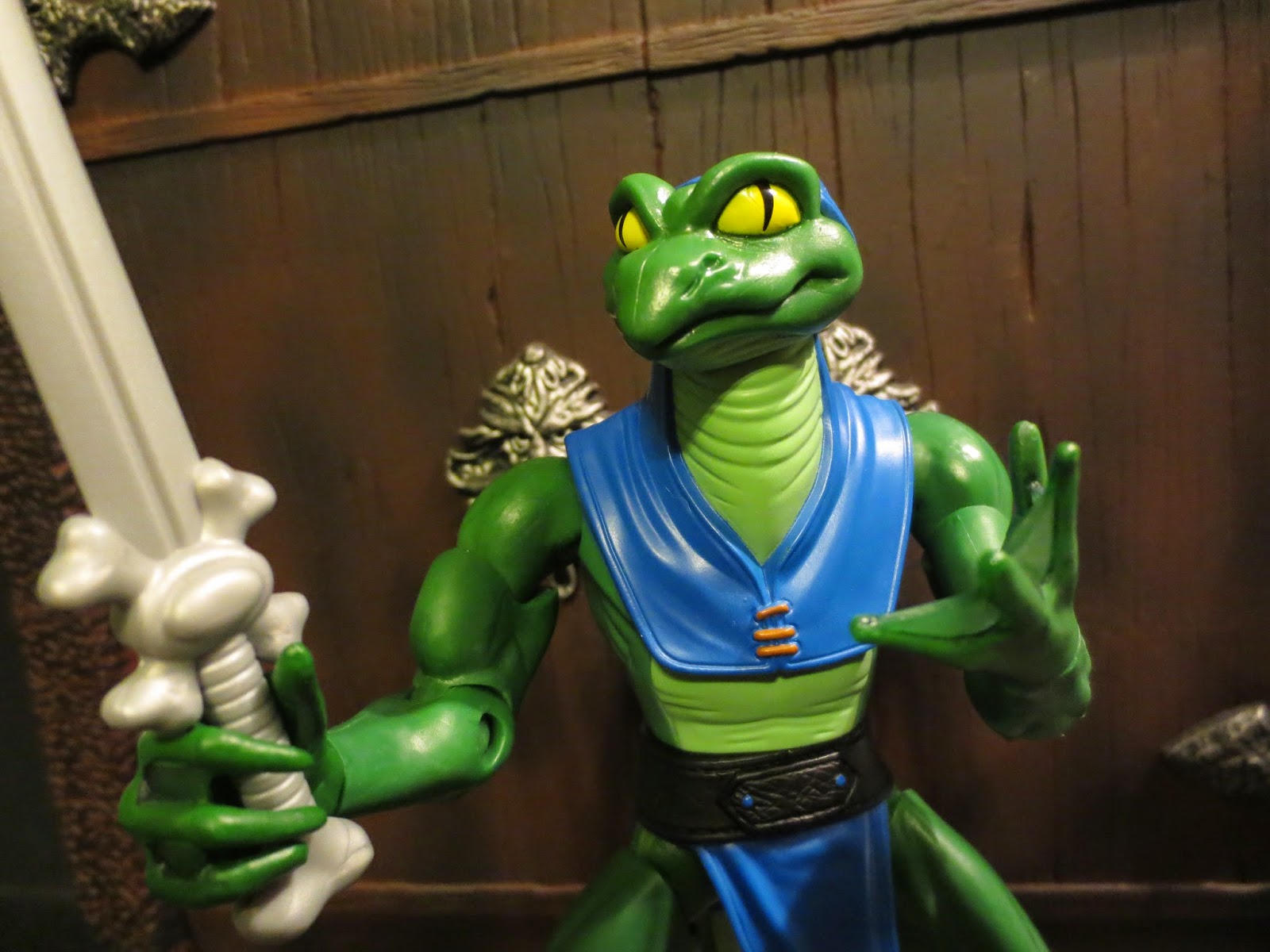 I really enjoy the Filmation Masters of the Universe cartoon but it's definitely not my favorite incarnation of MOTU, thus some of the characters with one or two appearances have not always been on my most wanted list. Lizard Man (like Fang Man) is one of those Filmation characters with a limited amount of appearances (three if you count He-Man and She-Ra: A Christmas Special) and an overly cartoonish look that always feels like he should have been part of the vintage line. He's a rather unique looking character (and that's saying something in MOTU) and ends up making a great figure. Lizard Man was the January 2015 Club Eternia subscription figure and he's been a constant companion to me at my desk at work over the past few weeks. He's just so much fun to fiddle around with! Learn more about Lizard Man after the break... 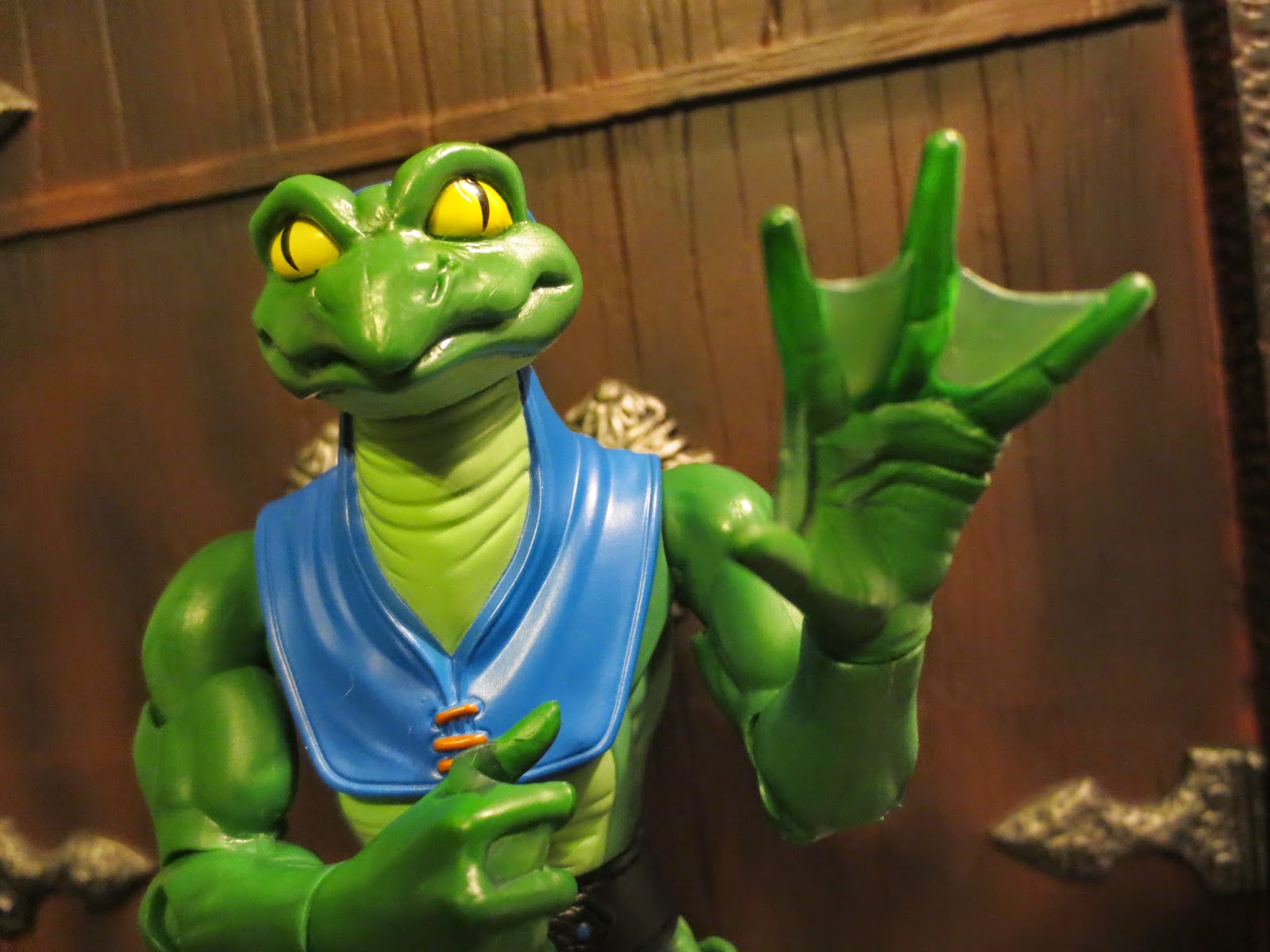 Accessories: Skeletor's Filmaton sword and the Diamond Ray of Disappearance. 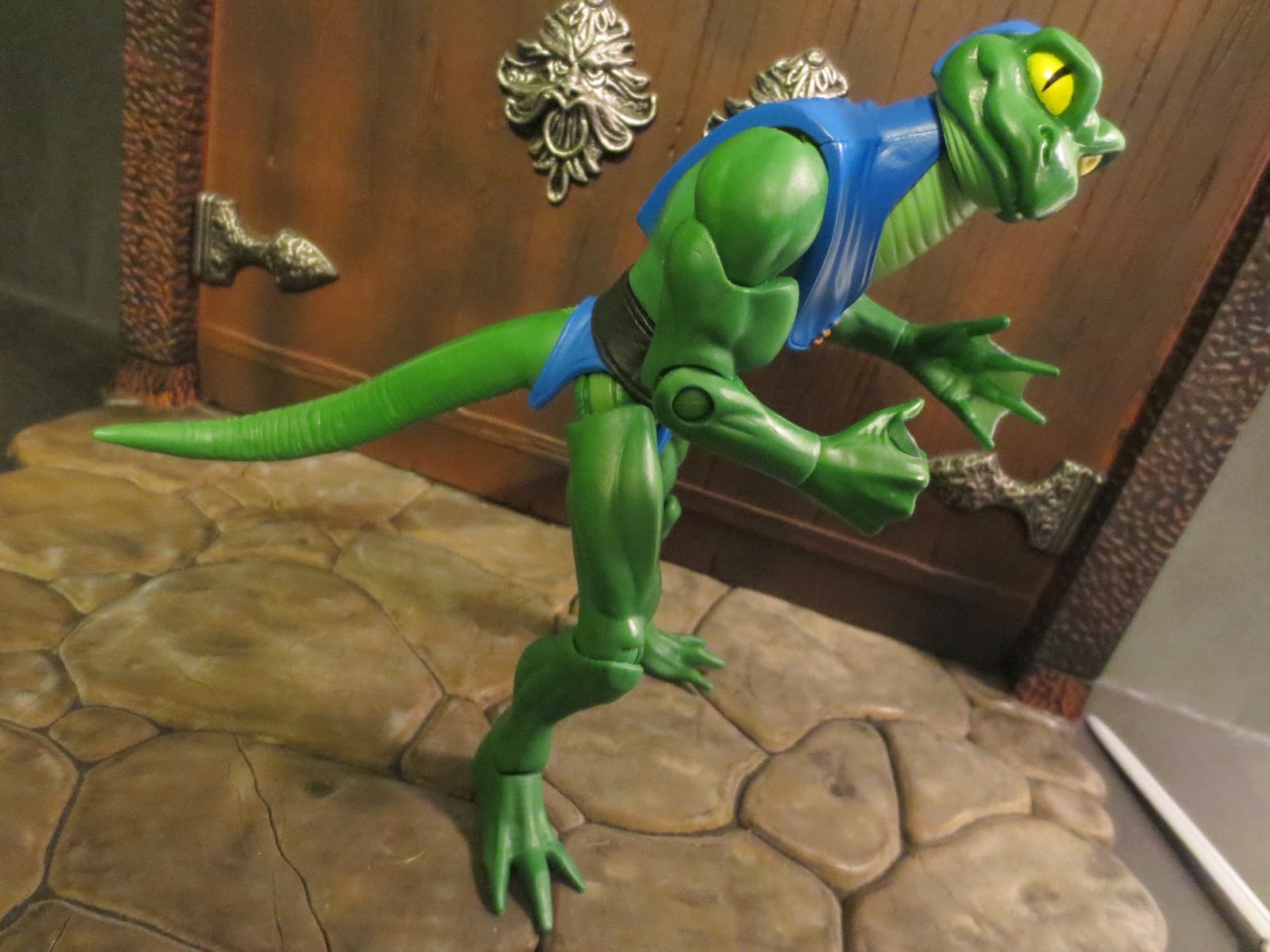 *Lizard Man is one of those figures that is just insanely fun to play with! He feels very solid and you can get some great poses out of him. I love his colorful appearance and his piercing yellow eyes. As seen in he picture above, Lizard Man's hands are molded in a translucent plastic which gives them a cool webbed appearance. Lizard Man will definitely stand out in a positive way in your MOTUC collection! 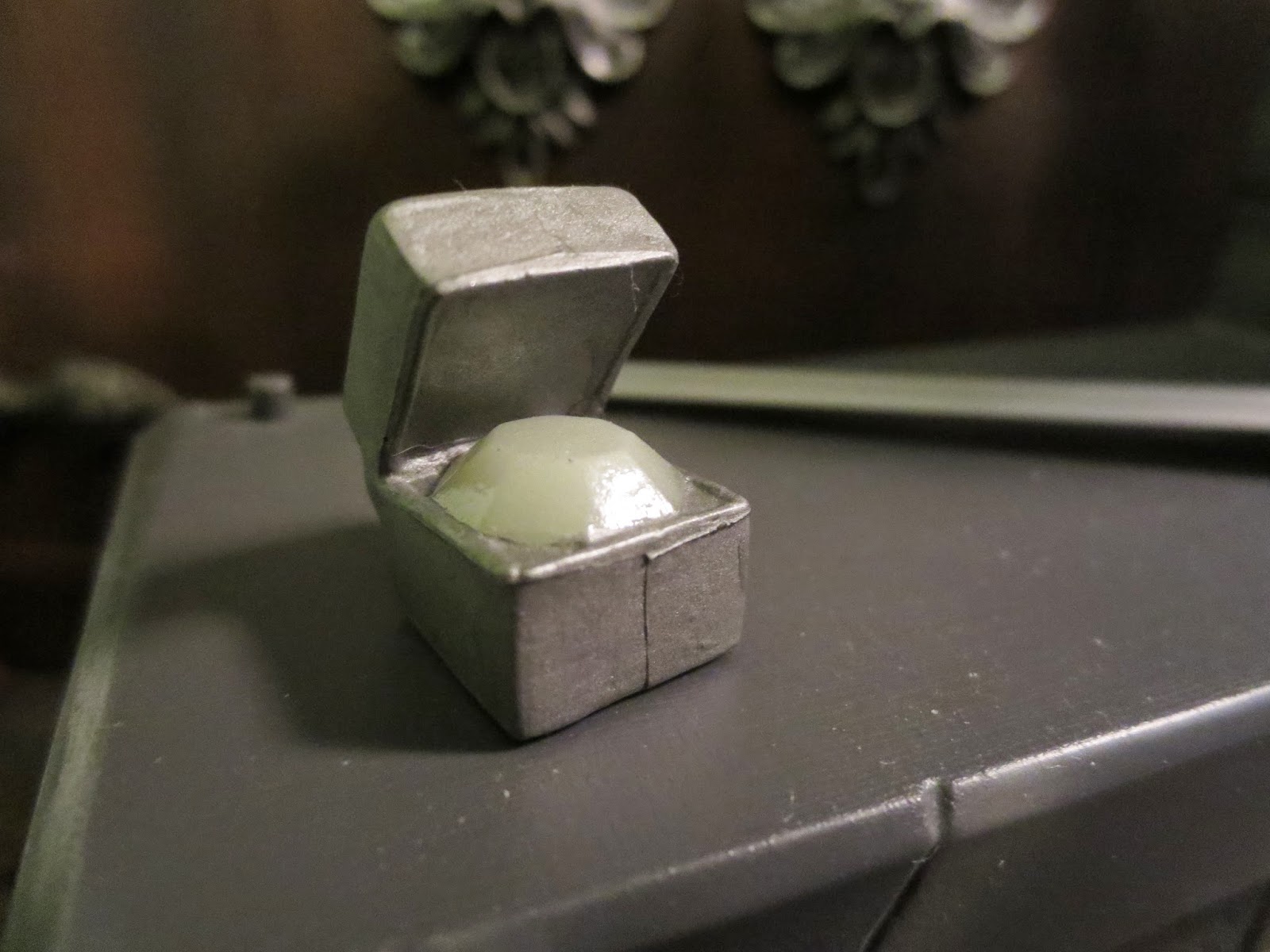 * The Diamond Ray of Disappearance is a really cool accessory to get. I love getting these story-based artifacts from the series as they look awesome in dioramas or scattered about Castle Grayskull. This is a simple piece, but one that should be easily recognizable to most fans. The diamond part of the piece glows in the dark. It's not too bright, but it looks cool. 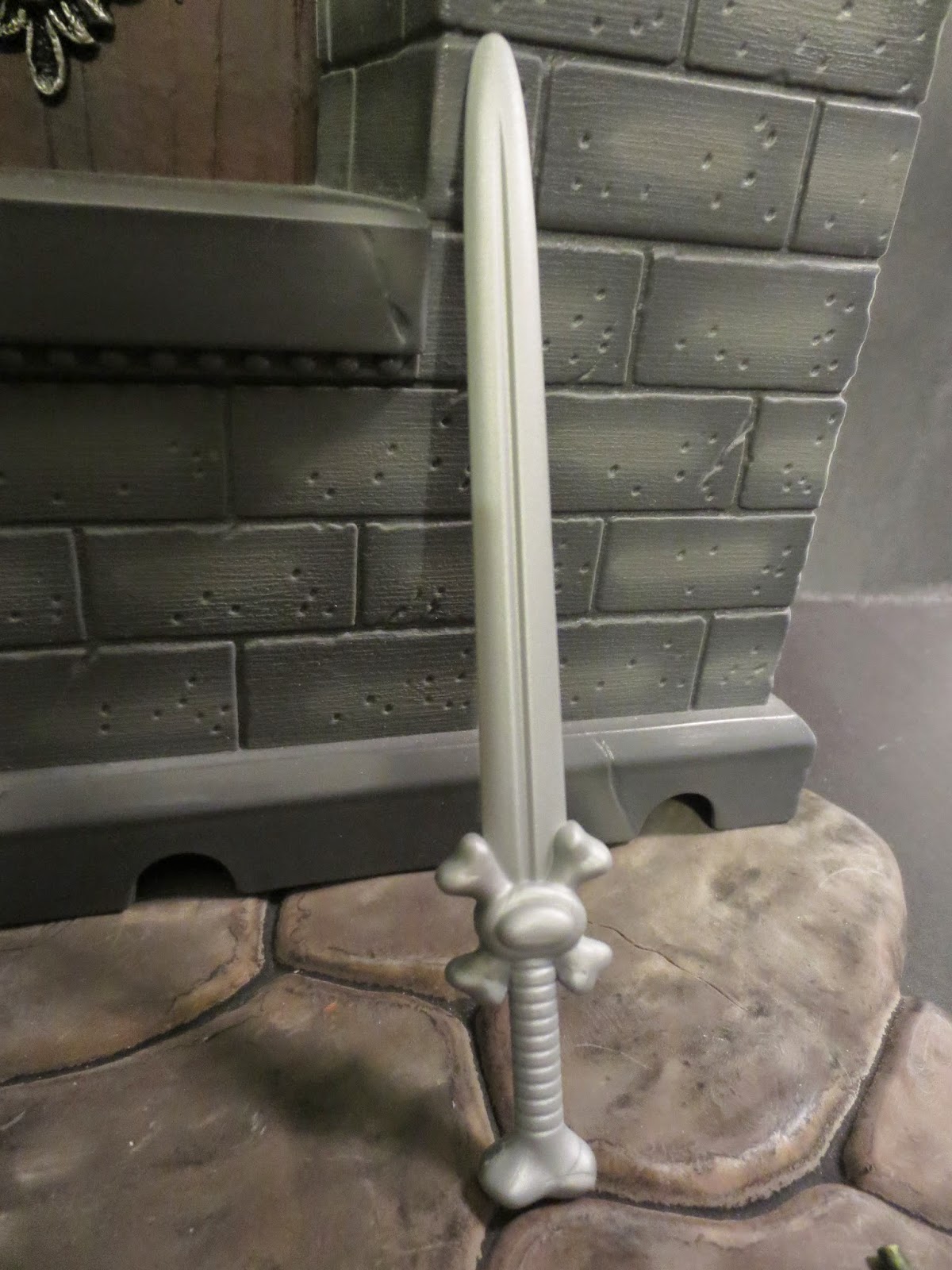 *Skeletor's Filmation sword is another neat extra. While I wish this piece had some paint on it (it's left with just the silverish gray plastic it's molded in) it still looks good. It's a great sword: Nicely sculpted, properly sword-like, and molded in a nice, solid plastic. I honestly just want to keep this weapon with Lizard Man as he needs something to fight with and he looks stellar holding it. 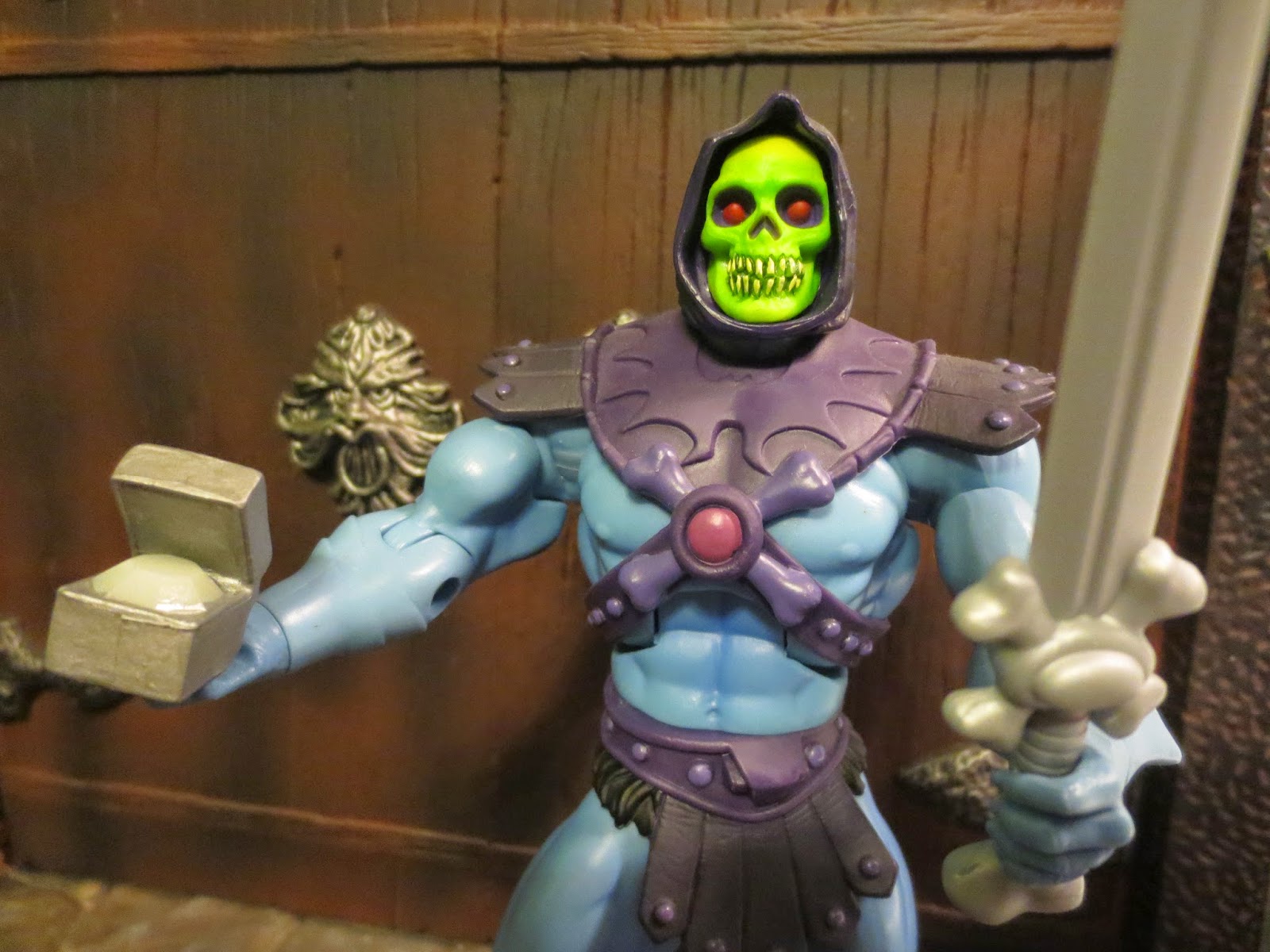 *Here's a very happy Skeletor with his new toys (well, I am taking the sword away from him after the shoot). The Diamond of Disappearance actually has little grooves sculpted in the bottom that allow Skeletor to properly hold the accessory. That's some slick thinking on someone's part! 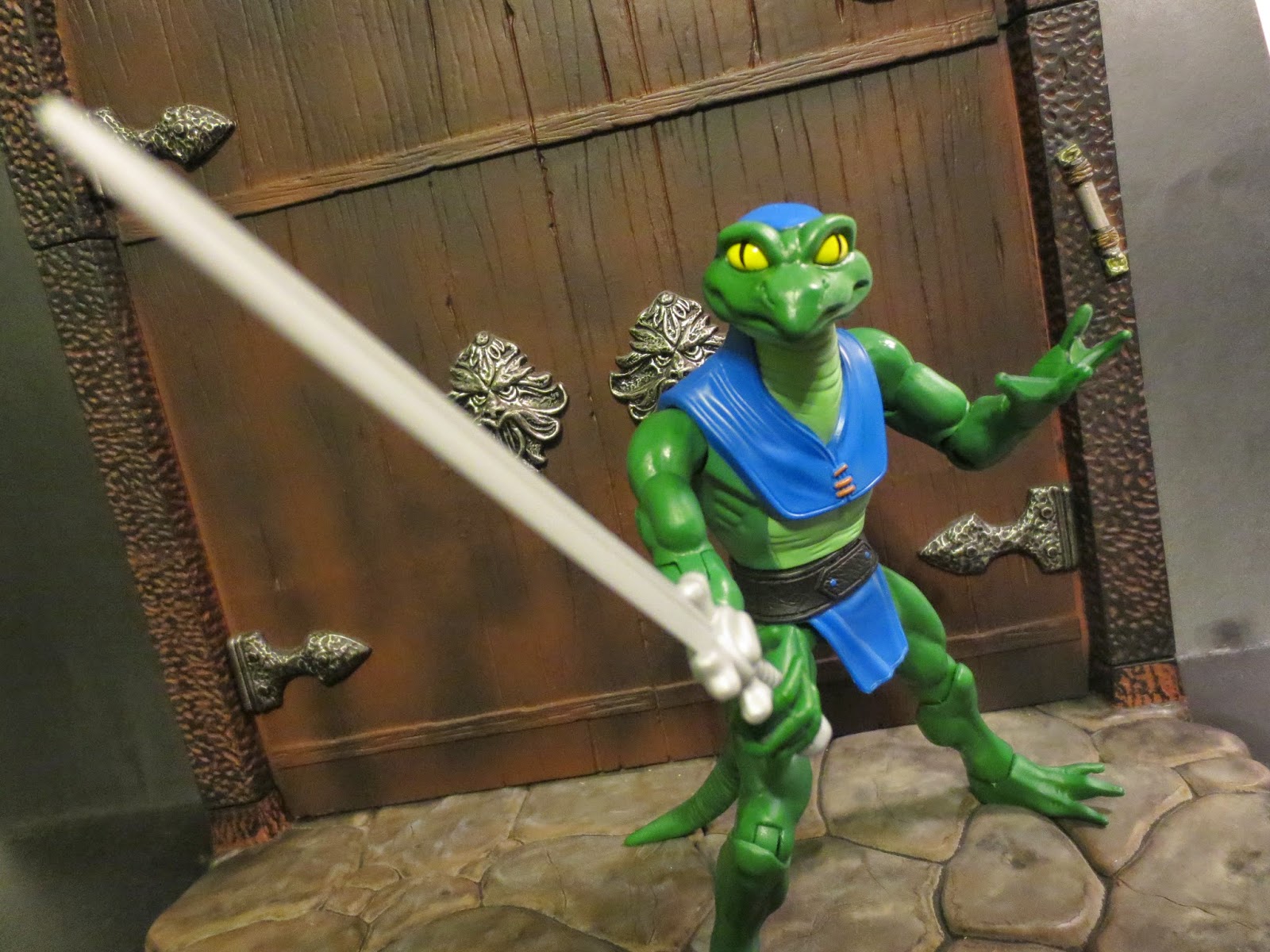 * Looks like Lizard Man got the sword back! As I mentioned earlier, this figure is quite fun to pose. Lizard Man looks great in a number of poses. I'm particularly impressed by how many new parts he features. Other than a few parts of his limbs shared with Modulok he's a completely new sculpt. I love the sculpting on his simple outfit. He reminds me of some sort of monk. Interestingly, Lizard Man has swivel/hinge knees which is rather unique for this line. 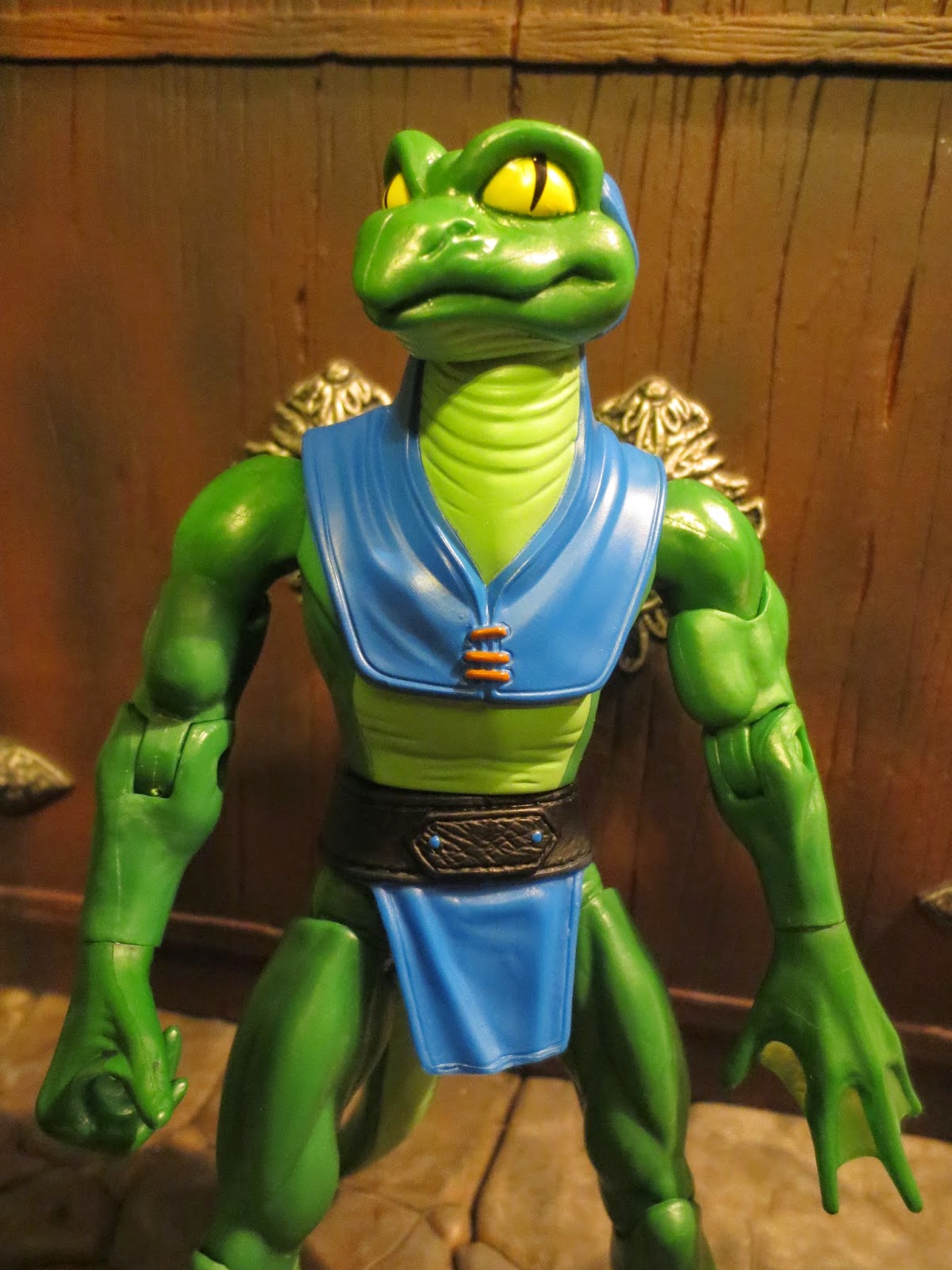 *The only real complaints about this figure I have are the lack of a hinged abdomen joint and his stiff ankles. Due to his swivel/hinged knees the limited ankles (with no lateral rockers) become less of an issue, but the missing hinged chest would have given Lizard Man the opportunity for more expression in posing. Since Lizard Man is portrayed as being much shorter than most other characters in the Filmation cartoon, anything allowing him to walk with more of a slouch would be welcomed. 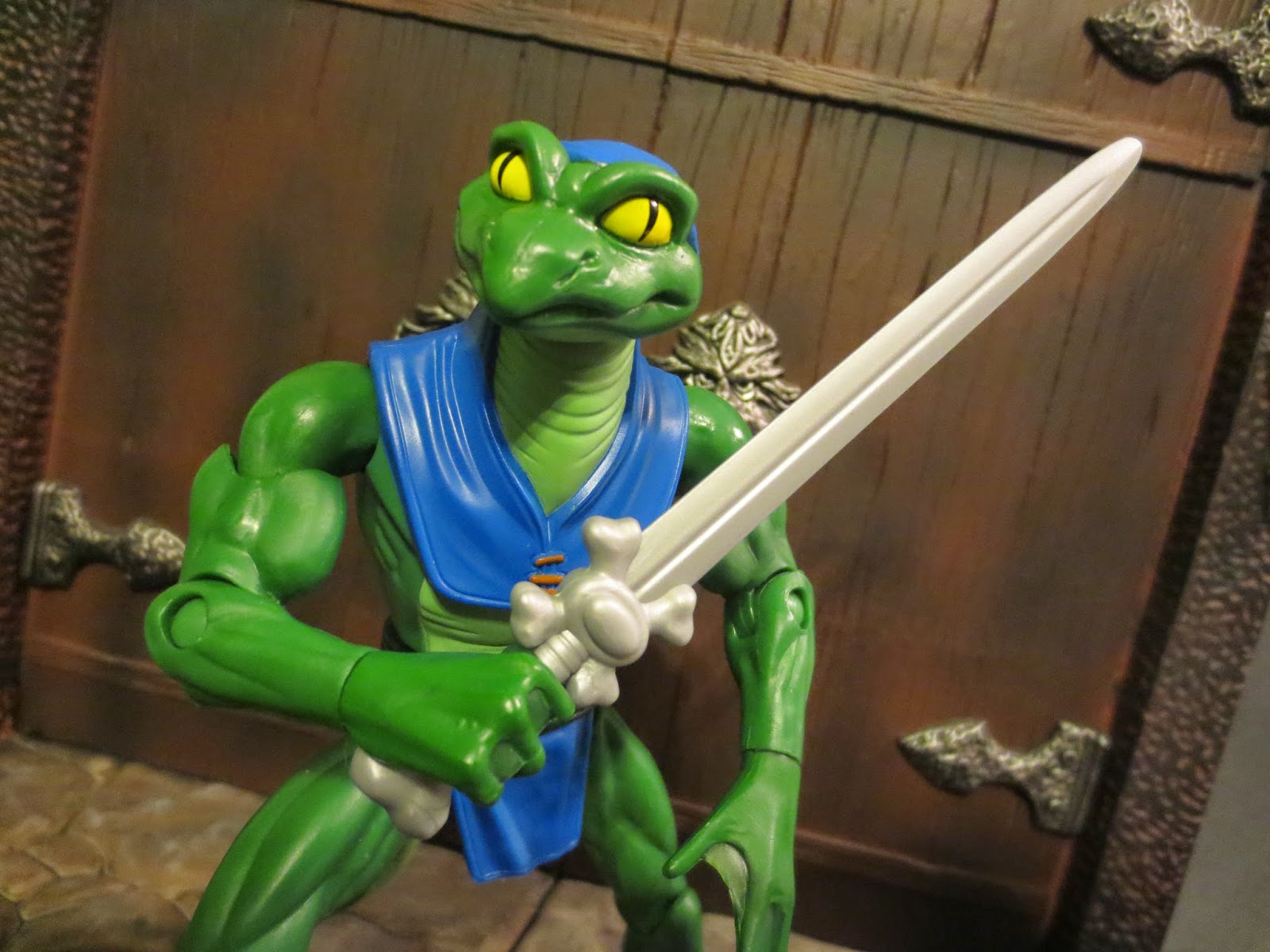 Other than some articulation concerns (and the lack of paint on the sword), I think Lizard Man is another excellent release. While he wasn't a character I was clamoring for I'm certainly glad I own him now. He's certainly a fun release and even though he looks very much like his animated counterpart, I don't think he actually looks too out of place when placed next to most other figures in the line. Maybe right up against someone like Fisto, Jitsu, or Vikor, but mixed in with the crowd? Lizard Man looks just fine. He's quite great, and I'll give him a Great ranking.


I've reviewed a ton of MOTU figures on this site as well as picked my 10 favorite figures of 2014 here!