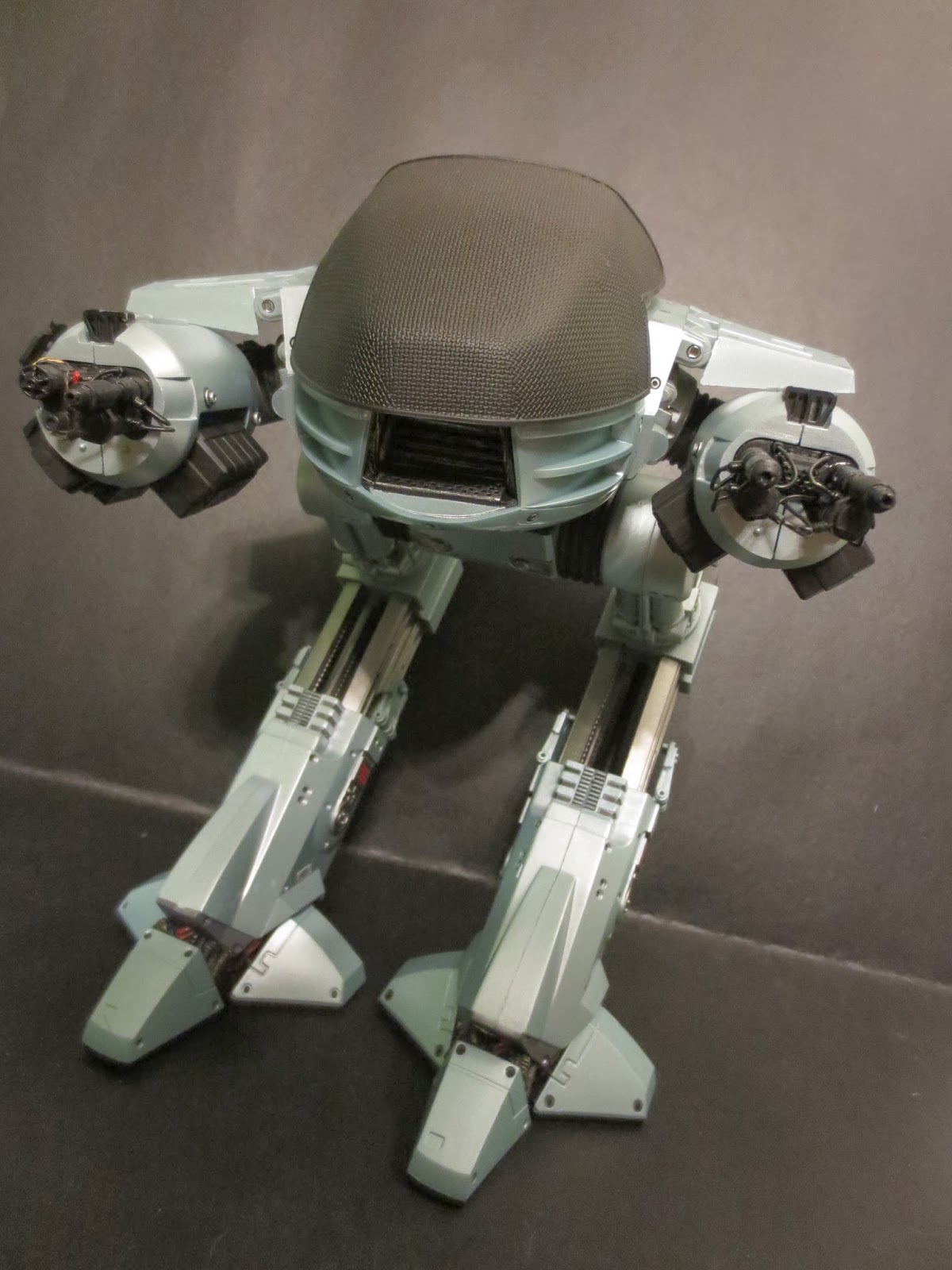 Looking back, it's really quite baffling as to how many of my favorite toys as a kid were based off of R-rated films that I really never got to see until I was much older (in some cases, not until I was an adult). Without ever having seen the films in most cases, properties like Aliens, Rambo, The Terminator, The Toxic Crusader, Predator, and RoboCop managed to ingrain themselves into my young mind based on the strength of their premises and character designs alone. Well, RoboCop may have had some help in making an impact on my young mind, and it's all thanks to the ED-209. When I was quite young (this had to be around 89 or 90) my family got invited to dinner with some neighbors. We went to their house and my parents went to the dining room where the adults were eating hors d'oeuvres while I went down to the basement where the kids were watching a movie. It was RoboCop, and I walked right in on the scene where the ED-209 malfunctions and shoots Kinney dozens of times. At the time I was absolutely horrified as I had never seen anything quite like that before. I had never owned the Kenner version of the toy so I had no other frame of reference for this terrifying mechanical monstrosity that had just gunned down a man for seemingly no reason. It's interesting to think back on that as an adult, (particularly in regards to the way that the ED-209 is depicted in the film and its sequels, because the ED-209 actually comes off as more of a joke or comedic element than a terrifying droid. Still, he does make a darn fine action figure and NECA did an excellent job with him. It's amazing how NECA seems to be able to do things that most other companies claim to be impossible, isn't it? Anyways, to help you to make the best decision as to whether or not you need to add an ED-209 to your action figure shelf, here's a handy FAQ! 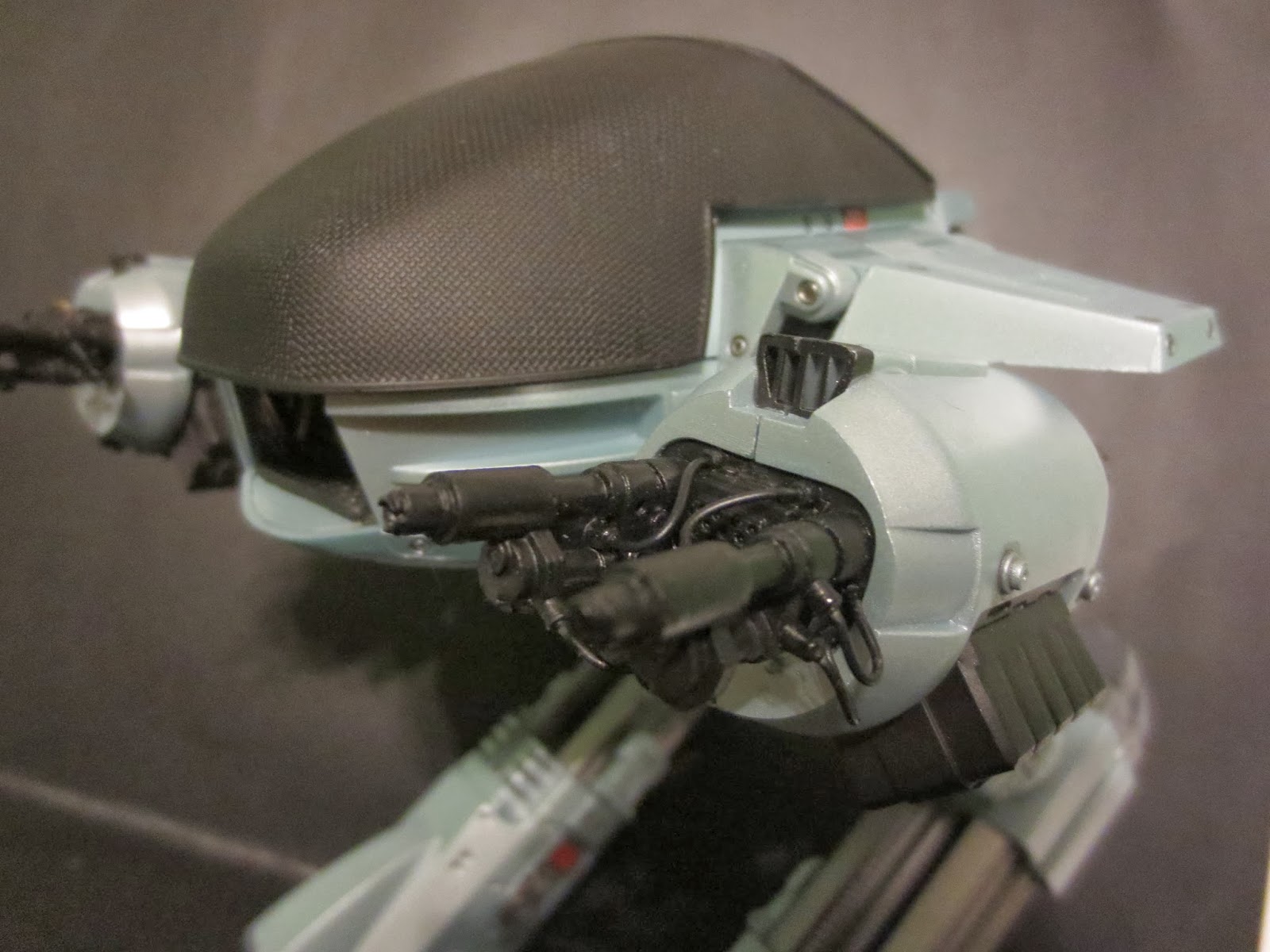 ED-209 (Enforcement Droid, Series 209) is an over-designed, under-engineered, and severely flawed android that appeared in Paul Verhoeven's 1987 film RoboCop. Created in the film by Omni Consumer Products, a private mega corporation that is working to privatize the city of Detroit, Michigan, the ED-209 is an urban pacification robot that is being tested in civilian law enforcement with the hopes that the military will be interested in investing in these units. 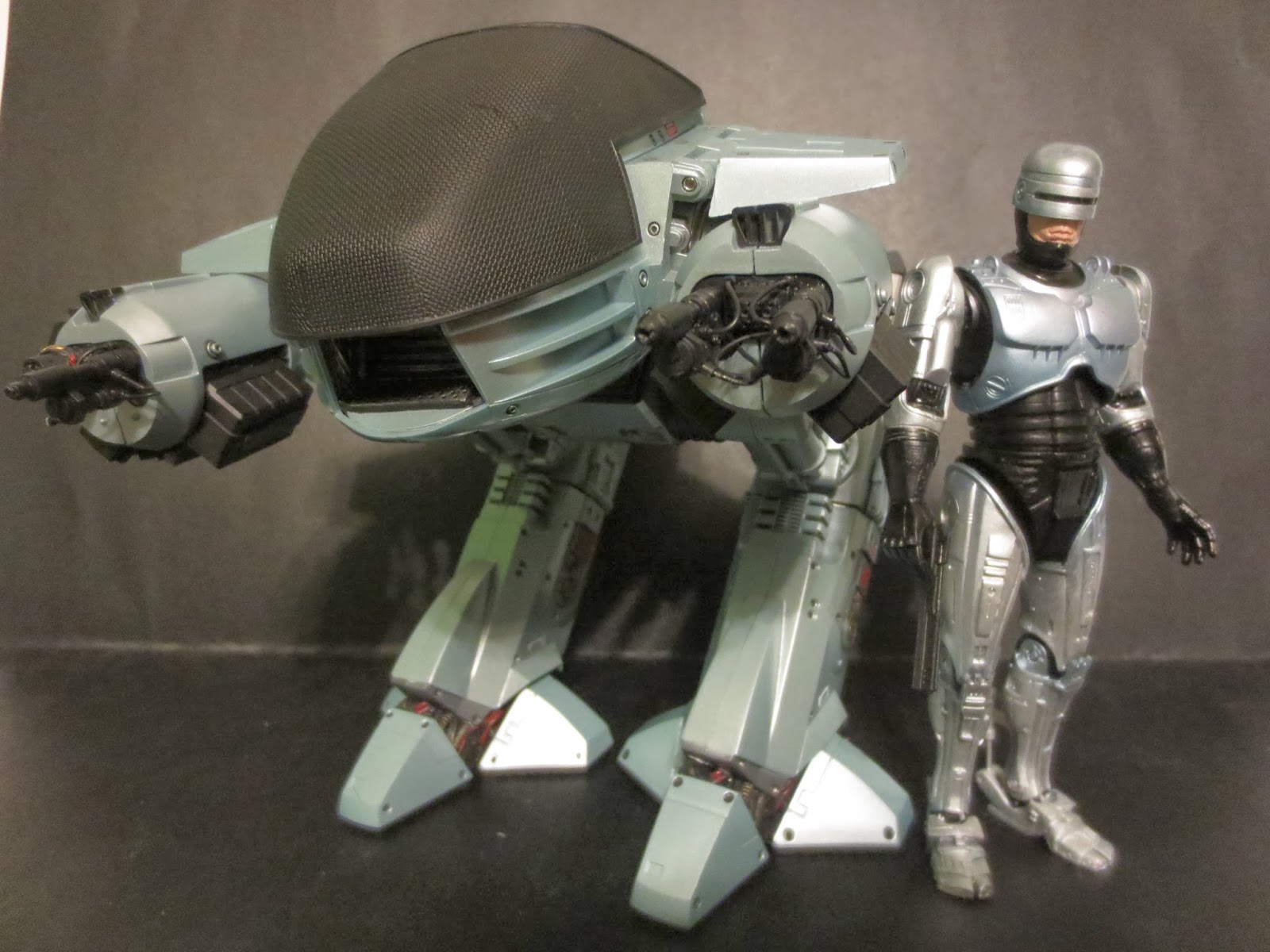 How do I pronounce it? Eee Dee- two oh nine?

Actually, in the movie everyone calls it the Ed -two oh nine. Like Ed Wood. Or EdTV. Or Mr. Ed.

He's a pretty decently sized toy. In his normal mode he's about 8 3/4 inches tall, 7 1/4 inches wide, and 9 1/2 inches from front to rear. When he's in "attack mode" he elevates up to a more menacing 10/12 inches tall. To help you get a sense of scale, NECA's RoboCop figures are around 7 1/4 inches tall. While I initially thought he seemed a bit short, looking at some pictures where other cast members are standing next to the ED-209, I think NECA hit the scale dead on. 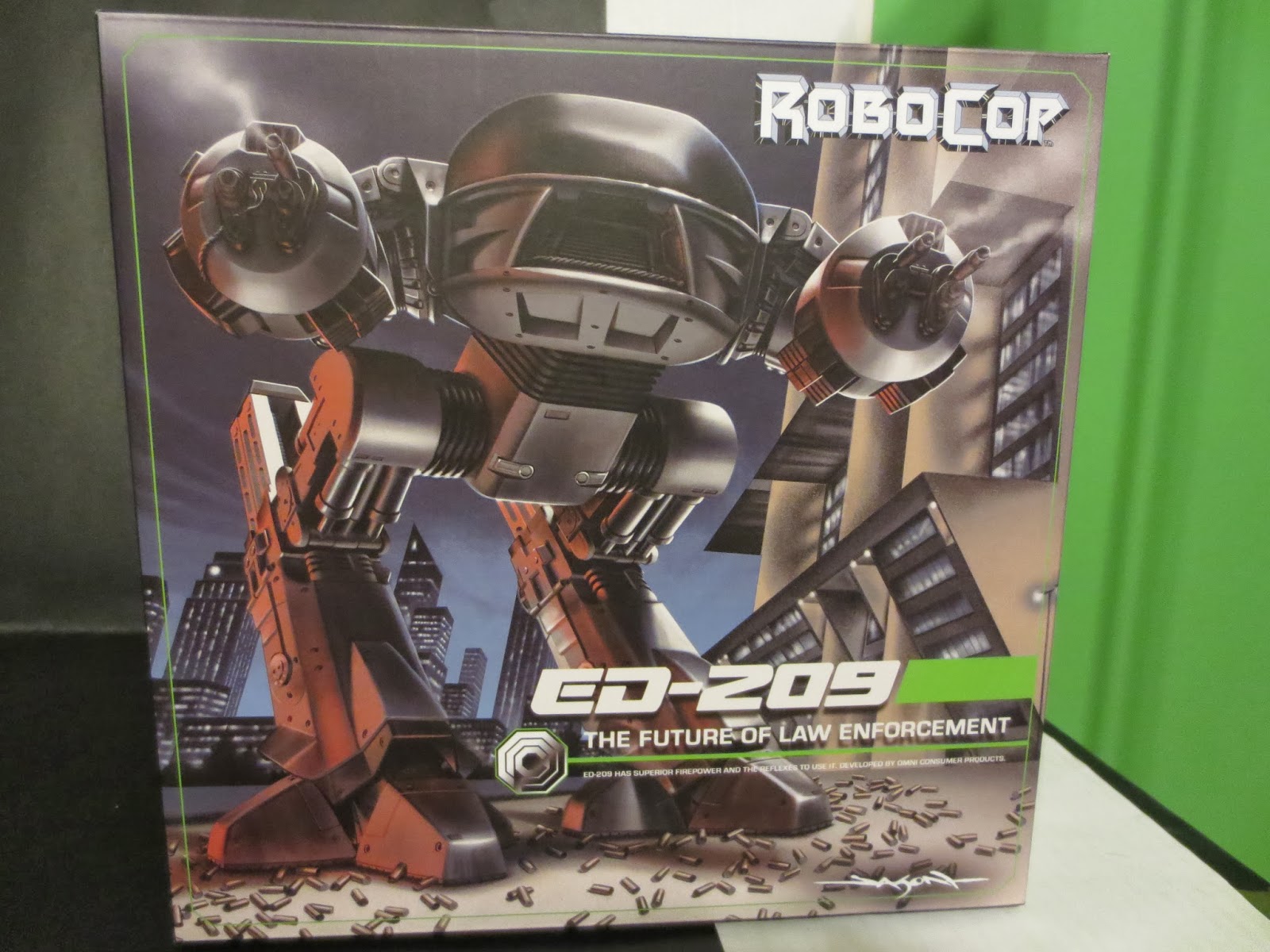 How does he come packaged?

I'm glad you asked! ED-209 comes in a really cool box. While it isn't a window box, it does feature both photos of the toy on the sides and some really cool art from Mondo artist Jason Edmiston on the front of the box. I rarely keep toy packaging, but I might have to make an exception here (unless I can sell the box to the Reel Brad Bell for $600). NECA's Chris Longo did excellent work on the packaging all around; I particularly like how the action features are displayed on the back in a manner that alludes to the way RoboCop's prime directives pop up on his HUD. The box seems to keep ED-209 quite safe although he was a pain to get out due to all of the twist ties and such. 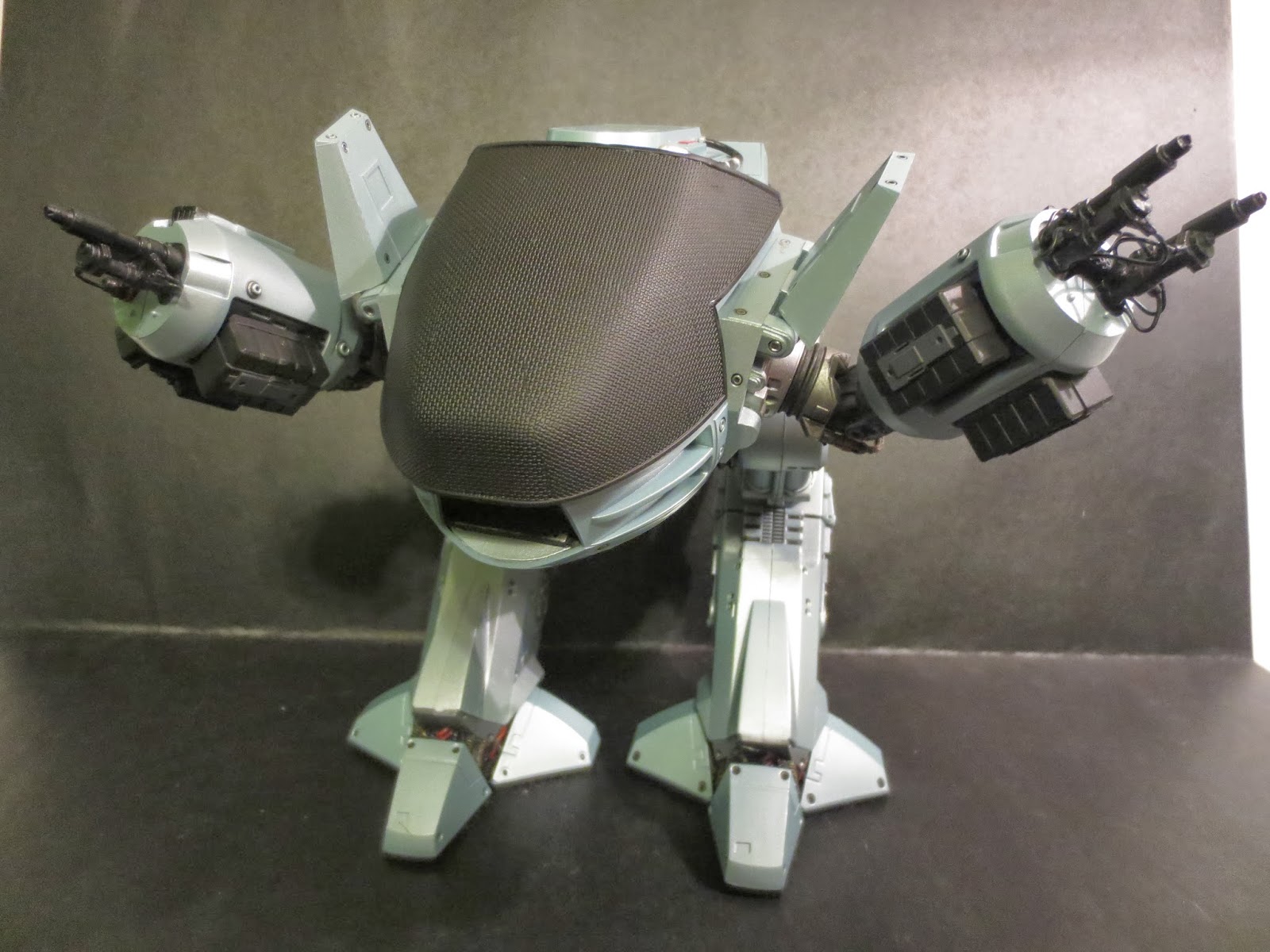 Not on its own.

I mean is it articulated?

Oh, well yes. Yes it is. It's tough to talk about articulation on a non human character because the reference points are weird, but I'm going to try here. ED-209 features: extending legs, swivel "knees", swivel thighs, a swivel below the "head," swivel shoulders, hinged elbows, swiveling gun barrels, hinged shoulder pads, and a hinged rocket pod on its right arm. With a bizarre design like this, it's really tough to say whether ED-209 is well articulated or not. I definitely thing the arms are very nice, as you can get some great poses out of them. I'm happy with him, although i think a ball joint would have been nice somewhere on the "torso" to give him a bit more flexibility. 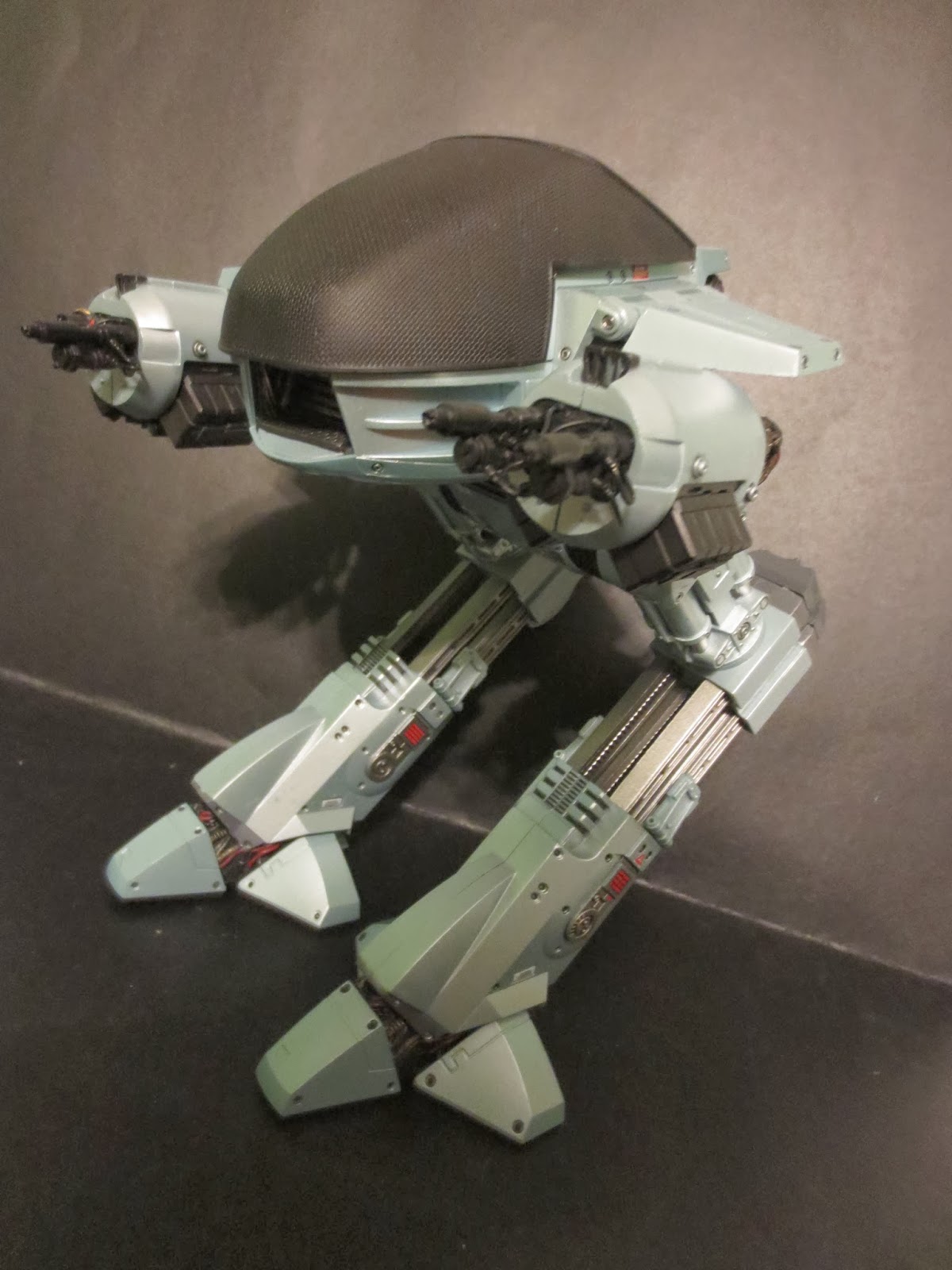 Can he climb stairs?

No, the ED-209 still can not handle stairs well at all. They are the Kryptonite to his Superman.

Can his legs fall off?

Interesting question. No, ED-209's legs are not intentionally removable (not is any other part of his body) but some customers have complained about having problems with the figure experiencing parts breaking off. Vincent at The Robot's Pajamas seems to have had some trouble with ED-209's upper body snapping off and a few other collectors on various forums have echoed similar problems. As always with a figure with some reported breakage issues, my recommendation is to either buy this figure directly from NECA or from a retailer that has a great return policy, such as Big Bad Toy Store. 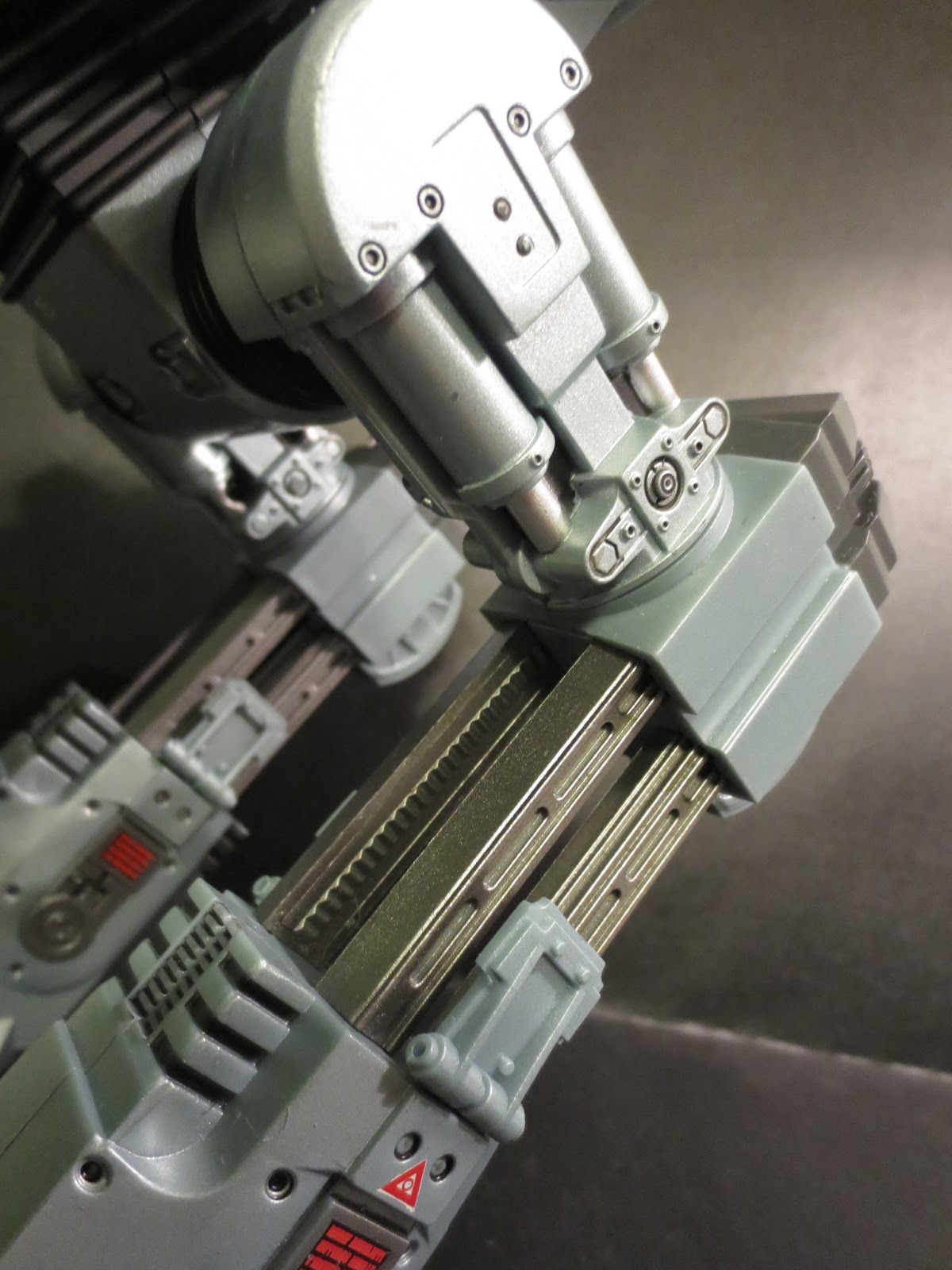 You mentioned "attack mode" earlier. How does attack mode work? Do I set ED-209 up and he'll defend my house?

No, it's nothing that complex. In the film ED-209 is capable of extending his legs and thus becoming taller with a wider field of fire. This figure replicates that feature by utilizing sliding joints on the toys legs. It looks great, but it can be a bit difficult to get ED-209 in and out of attack mode because, on my figure at least, his right leg tends to stick. While I don't think anyone would mistake ED-209 for being a cheap toy, the plastic he is made out of does feel a bit brittle. Be very careful when moving him in and out of attack mode as there are at least five thin plastic pieces that the upper leg has to slide over to move into place (four gray rails and a black rod). He is quite impressive when fully erect, however.

Shut up. The package clearly states this toy is for "Ages 17 & Up". If you're not going to act like an adult, then maybe you don't deserve to play with ED-209. 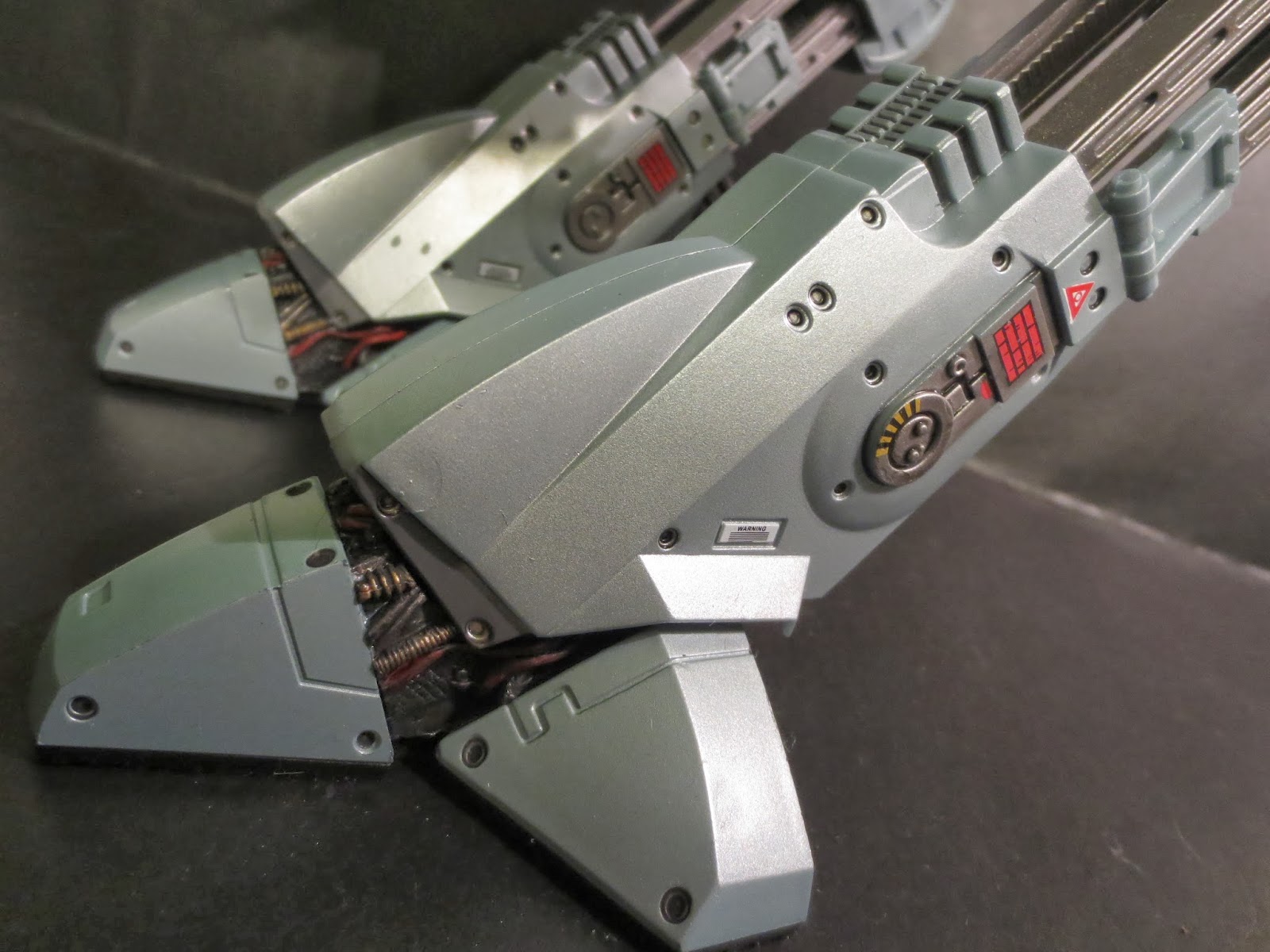 The sculpt is excellent and shows off NECA's excellent attention to detail that we all know and love. ED-209 definitely has that sleek, stylistic look going on that perfectly matches the film version. The crew that created the model for the film built ED-209 to look flash, sporty, and futuristic, but intentionally choosing to sacrifice form over functionality. One of the running jokes in the film is that the ED-209 is overwhelmingly useless, whether it's software glitches or his inability to tackle stairs. All of the little hi-tech details such as the armored plating, the grill across the front, and the black textured dome on top are handled perfectly. Minor details such as rivets, tiny panels and pistons, and the wiring visible around his ankles and shoulders also look quite nice as well. Seriously, I think this might be the best looking ED-209 to date. 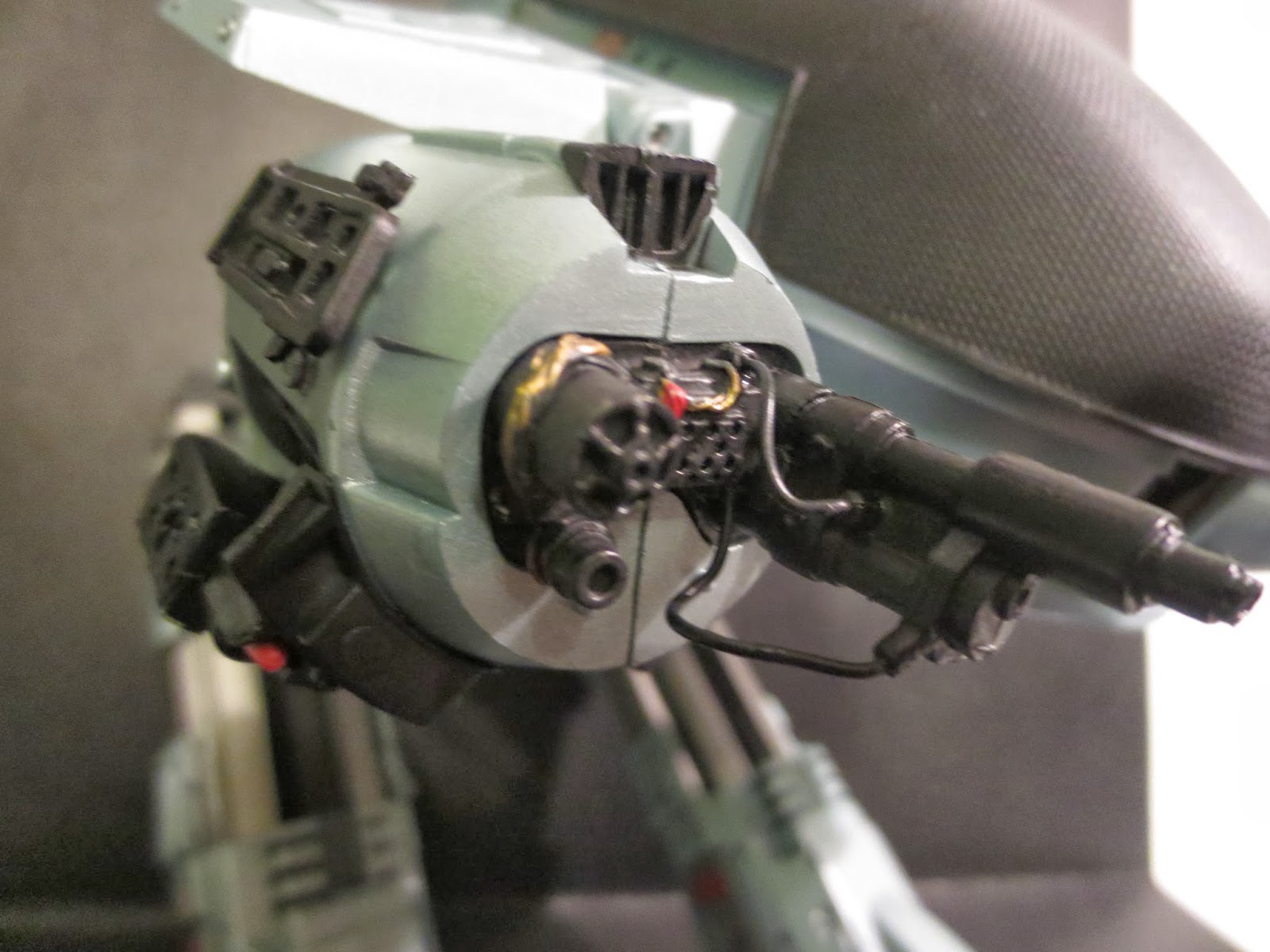 What is he armed with? His "arms" look pretty busy!

Yeah, the one thing you can't fault the ED-209 for is being under-armed. This guy is definitely carrying some heavy firepower in order to gun down both street gangs and corporate board rooms. The left arm has two autocannons while the right arm has one autocannon, an autoshotgun, and a rocket launcher with three missiles. The weapons look great and feature some excellent smaller details such as holes in the barrels, cords and wires, and the ammo boxes contained underneath. The rocket launching unit is hinged and folds away from the body. It doesn't fold as far away from the right arm as it probably should, but it's still a nice feature. 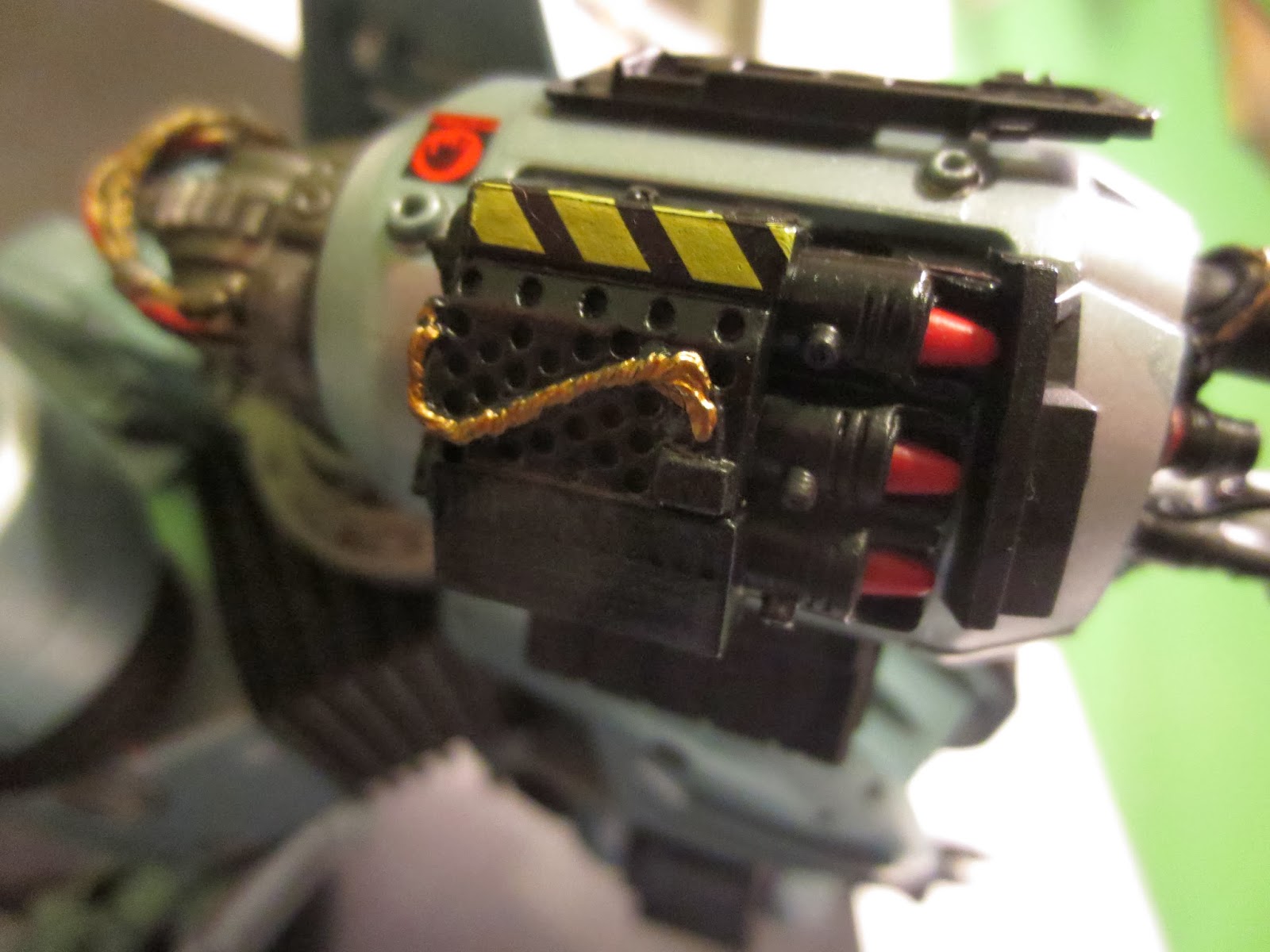 Do the guns actually work?

The ED-209 neither fires rolls of caps nor live ammunition. 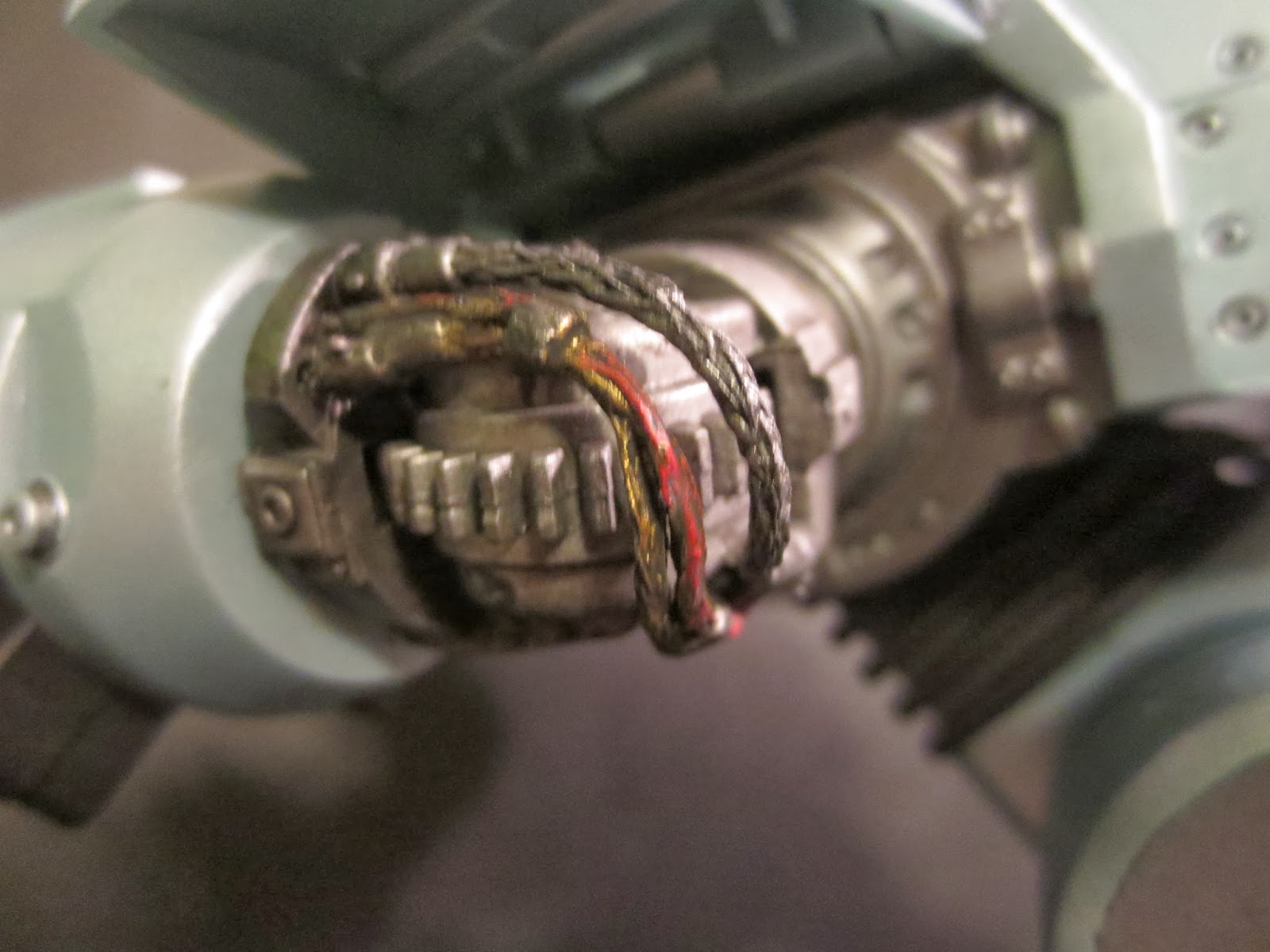 Does he come with any accessories?

No, but I'm not sure what he would come with. All of his weaponry is built onto him so there isn't anything he really needs. 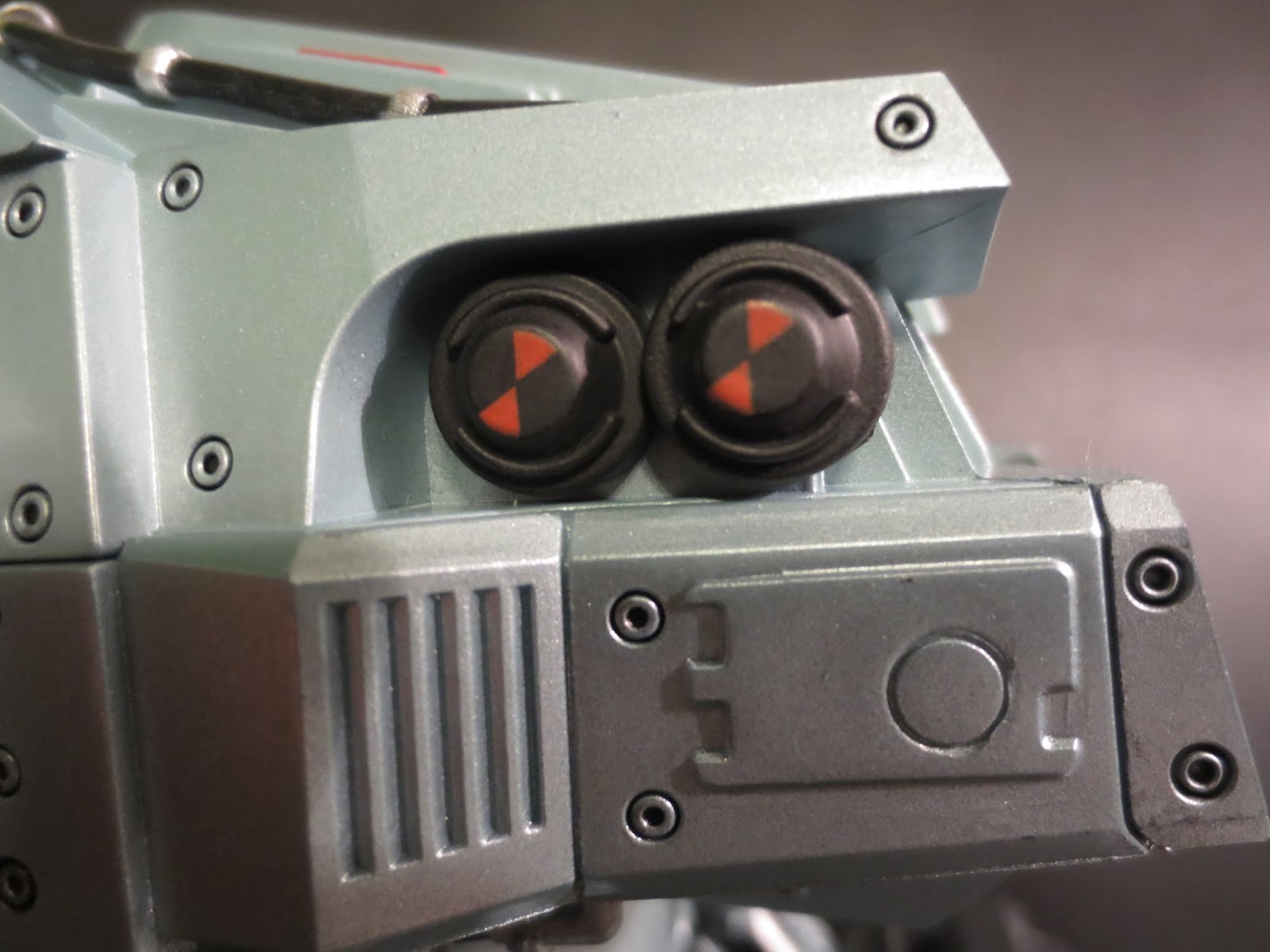 How is the paint work on this guy?

It's pretty solid. The main body is molded in an excellent plastic that has that same metallic blue sheen to it as RoboCop himself. All of the little details like the rivets and pistons are also painted and plenty of cool details such as caution and warning labels are present. If you were looking at the figure from a few feet away, you'd be completely justified in believing it was made of metal. It looks fantastic. 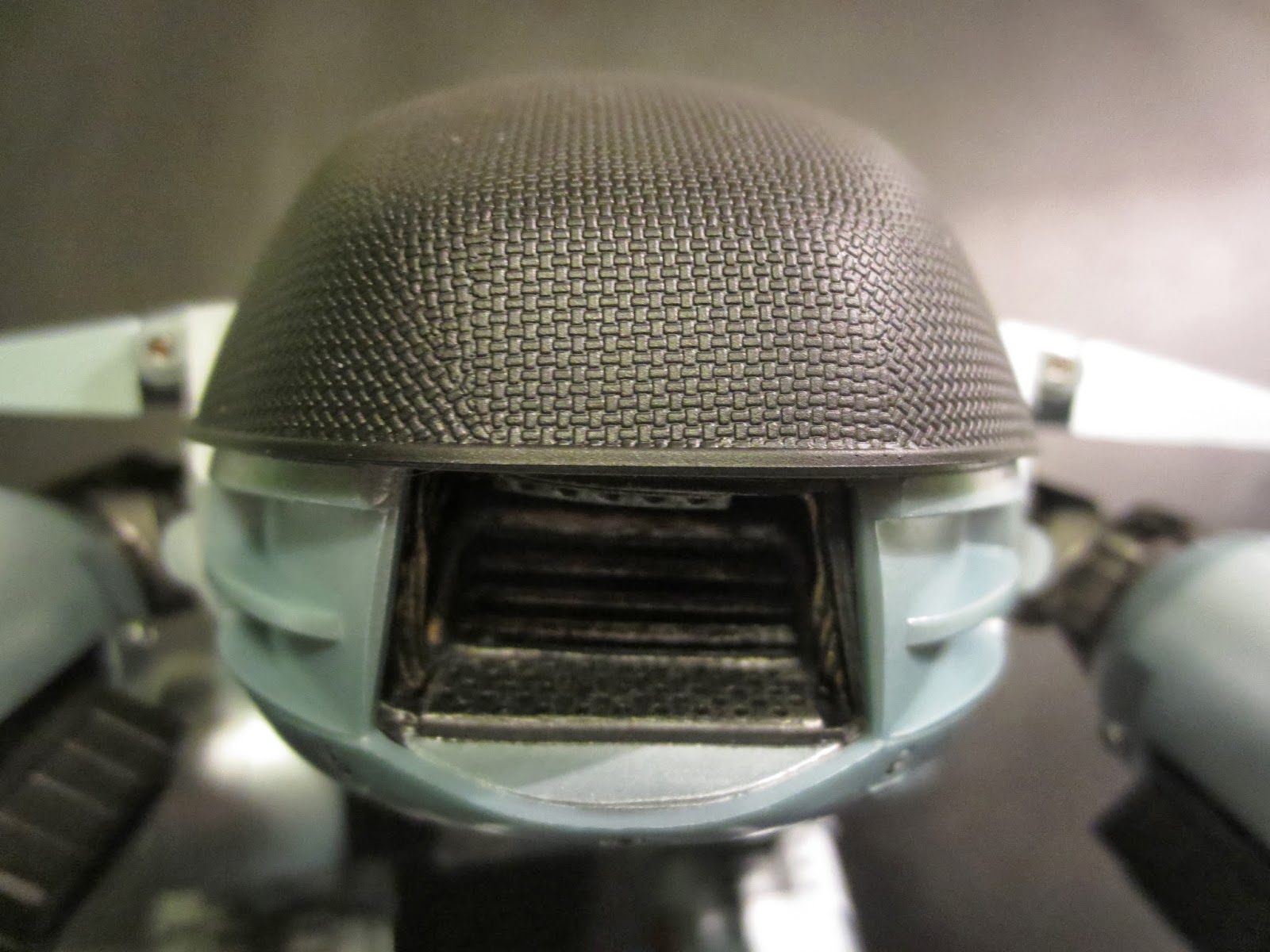 He does! There is a button on the right rear of the ED-209 that causes the voice to emit from the front grating. The sound is quite loud, but a bit muffled. The sounds seem to come directly from the film, though, which is kind of cool. ED-209 has the following phrases and sound effects: 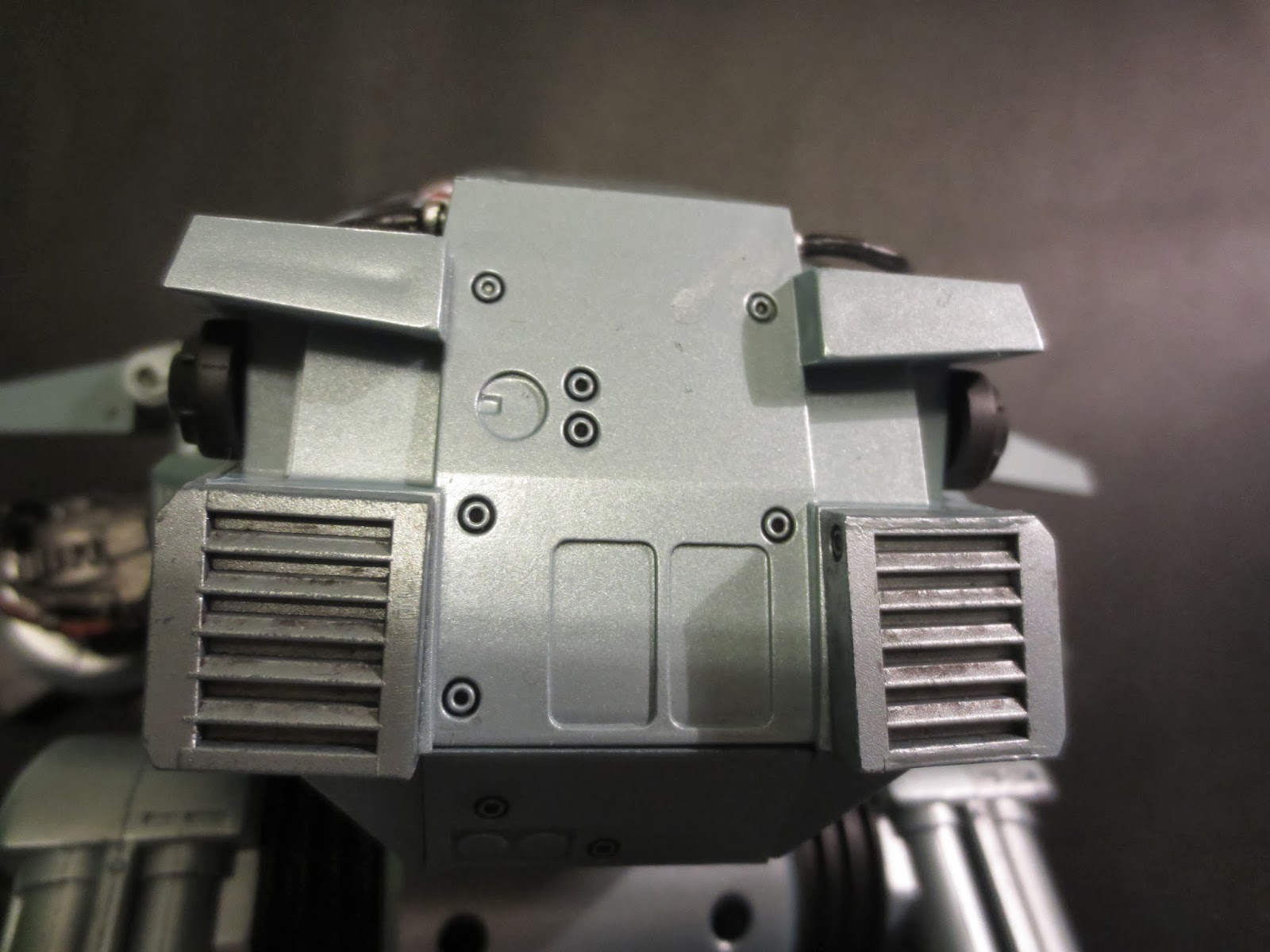 Any problems with the figure that you would point out?

Other than mentioning the breakage issues that some other collectors have had and reiterating that parts of this figure do feel quite fragile, not really. I do think that it needs to be stressed that this guy is by no means a toy, however. He's really not intended for play- just display. Make sure to be careful when removing him from the package as he has more twist ties on him than a truckload of Wonder Bread. 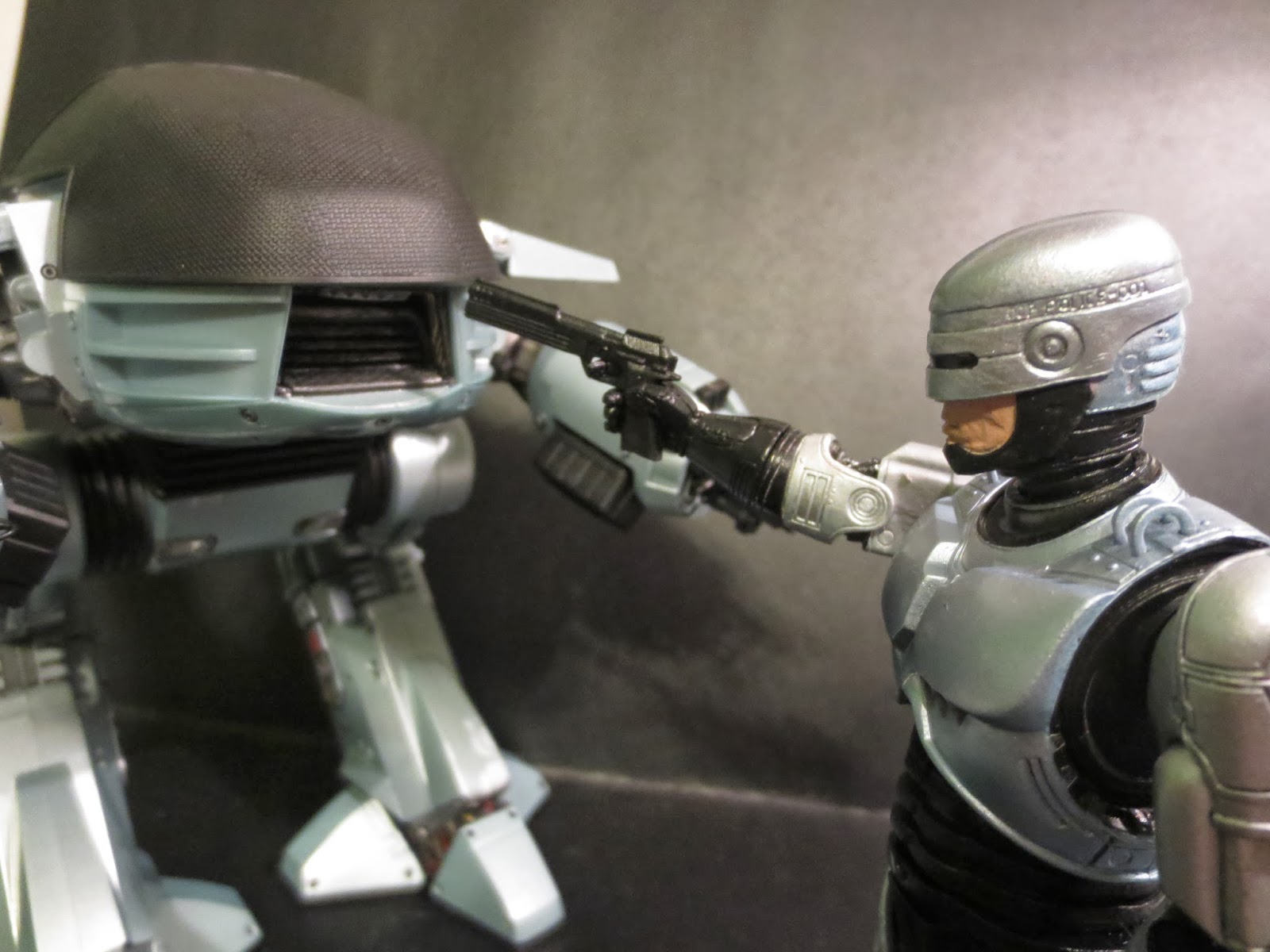 How would you rate him?
The guy looks awesome and film accurate and is going to stand in a place of prominence in my living room. He's perfectly in scale with NECA's RoboCop, has awesome packaging, decent articulation, an amazing sculpt, and some pretty solid paintwork. The sound effects are fun as well (although I do wish the voice was a bit clearer). Overall, I'm giving ED-209 a Great. This is a Great figure and I've had no problems with mine at all. Whether you collect Robo-Cop stuff, 80's pop culture toys, or just want this guy to sit on your desk at work, ED-209 is a good purchase. And I'd buy that for a dollar. 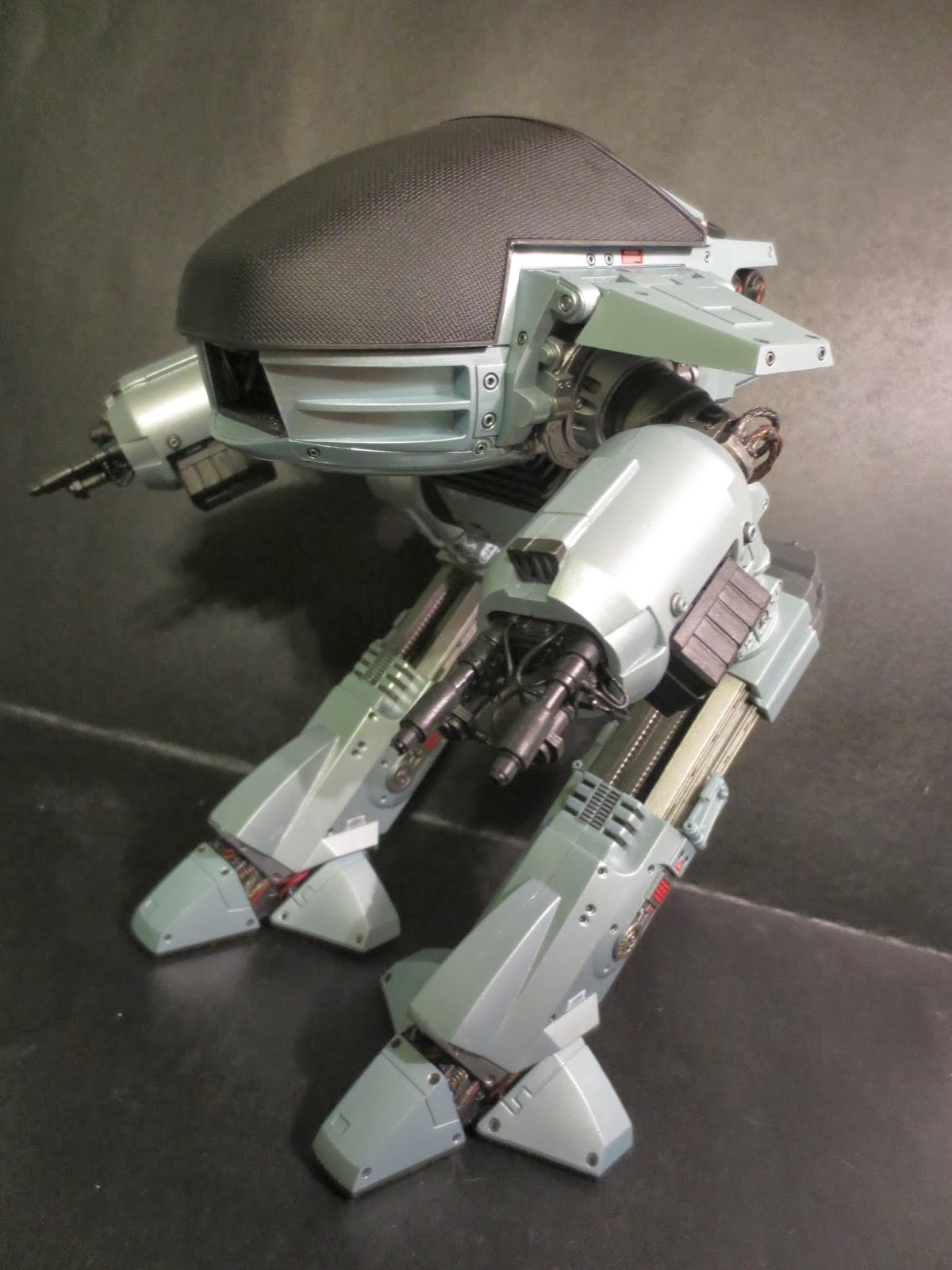