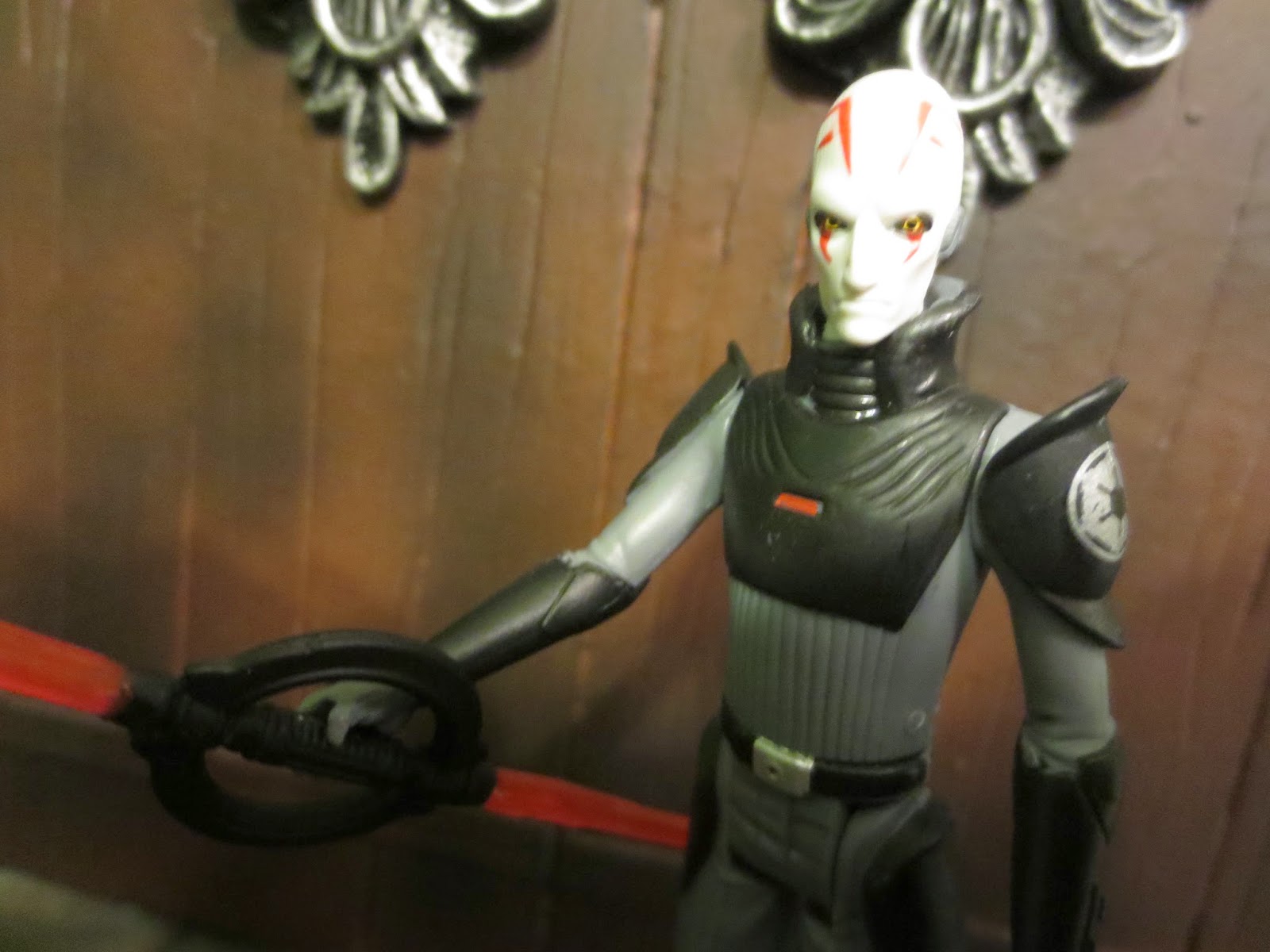 I have not yet seen Star Wars: Rebels but I'm getting ready to get the season pass for it through Amazon here in the next week or two. I did just finish the Rebels prequel novel A New Dawn, though, so between that and keeping up with the toyline I've definitely been exposed to the characters. Today I'm looking at the Inquisitor from the Star Wars: Rebels line, a subset of the Saga Legends figures. The Saga Legends figures are the 1/18th scale figures that have minimal articulation (typically 5 points) and non-dynamic poses in order to offer a less expensive action figure alternative. While I prefer my modern Star Wars figures to feel, well, modern, I did pick up the Inquisitor as kind of an impulse grab. He's a neat character (I liked the Pau'ans in Revenge of the Sith) with a cool appearance to him who also was only around $6. For that price I snapped him up. More thoughts on him after the break... 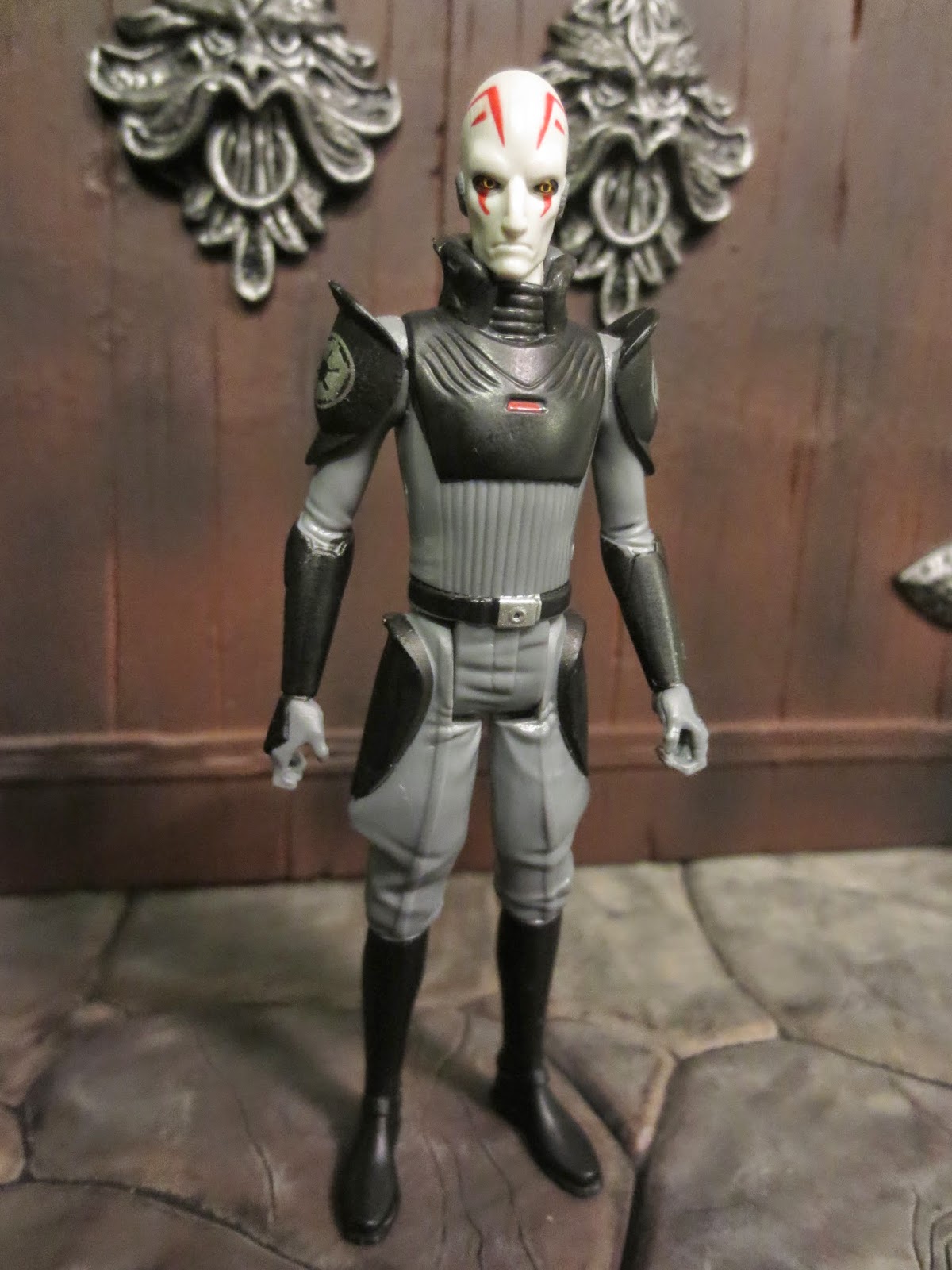 The Facts:
Height: Just a hair over 4 inches. 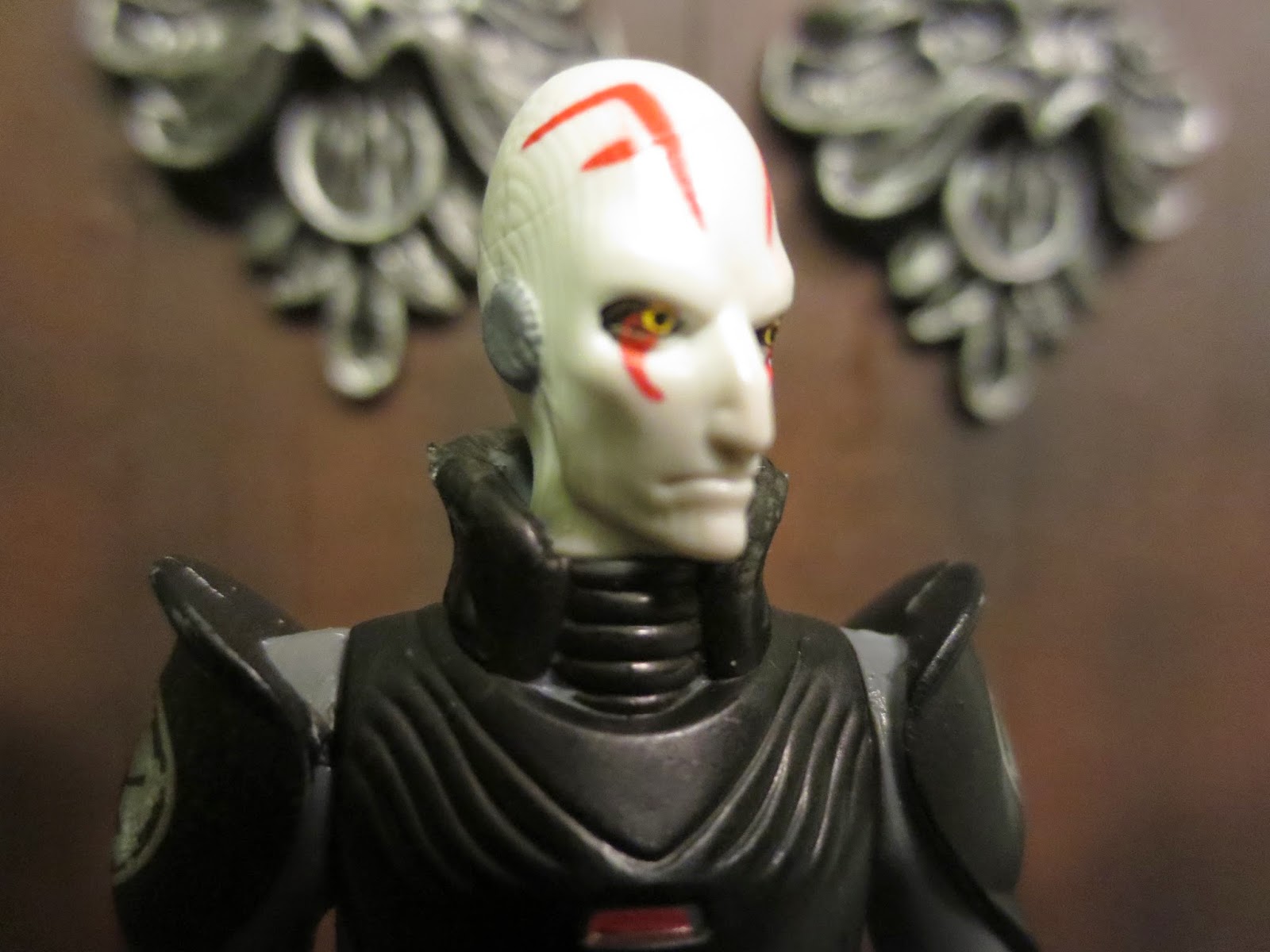 * While it retains the animated style of its source material, the Inquisitor is a really nice looking figure. He's not so cartoonish that he looks wildly out of place next to other 1/18th scale Star Wars figures but he still resembles his animated counterpart. There's some nice detail on this figure such as his ribbed shirt, his cool chest armor and pauldrons, and the unique texture on his head. If you're just standing these guys on a shelf, you should be pleased with how they display. 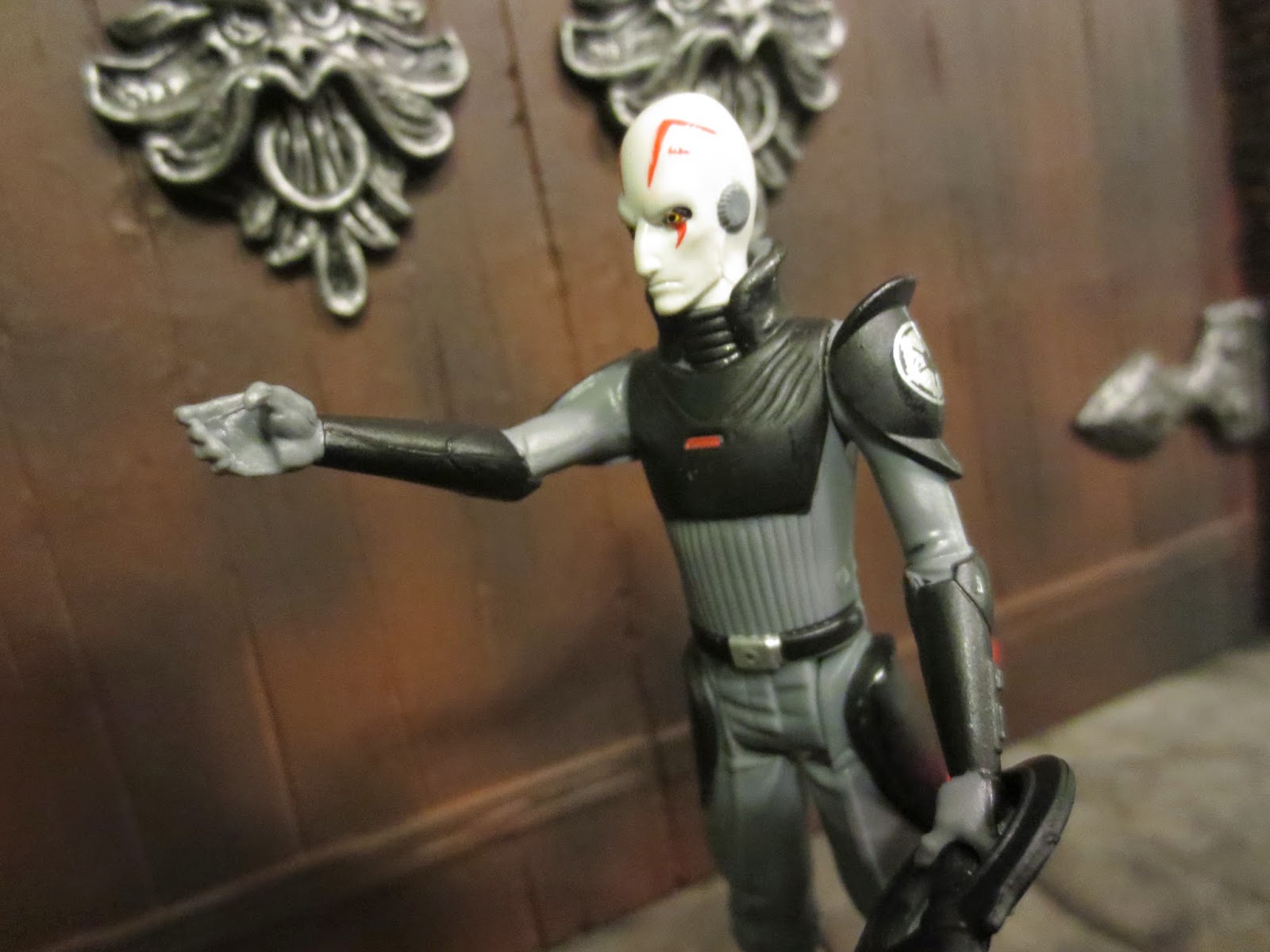 * While his articulation is limited, the Inquisitor's hands are positioned at an angle so that when he holds his lightsaber out it actually sits at an angle too. This is a small thing, but believe me, it helps make this simply articulated figure look a bit better.

* The paint work is really quite nice and clean. That's something some of Hasbro's Saga Legends figures have struggled with so it's nice to see that they've gotten it under control. The eyes and facial tattoos look really sharp. 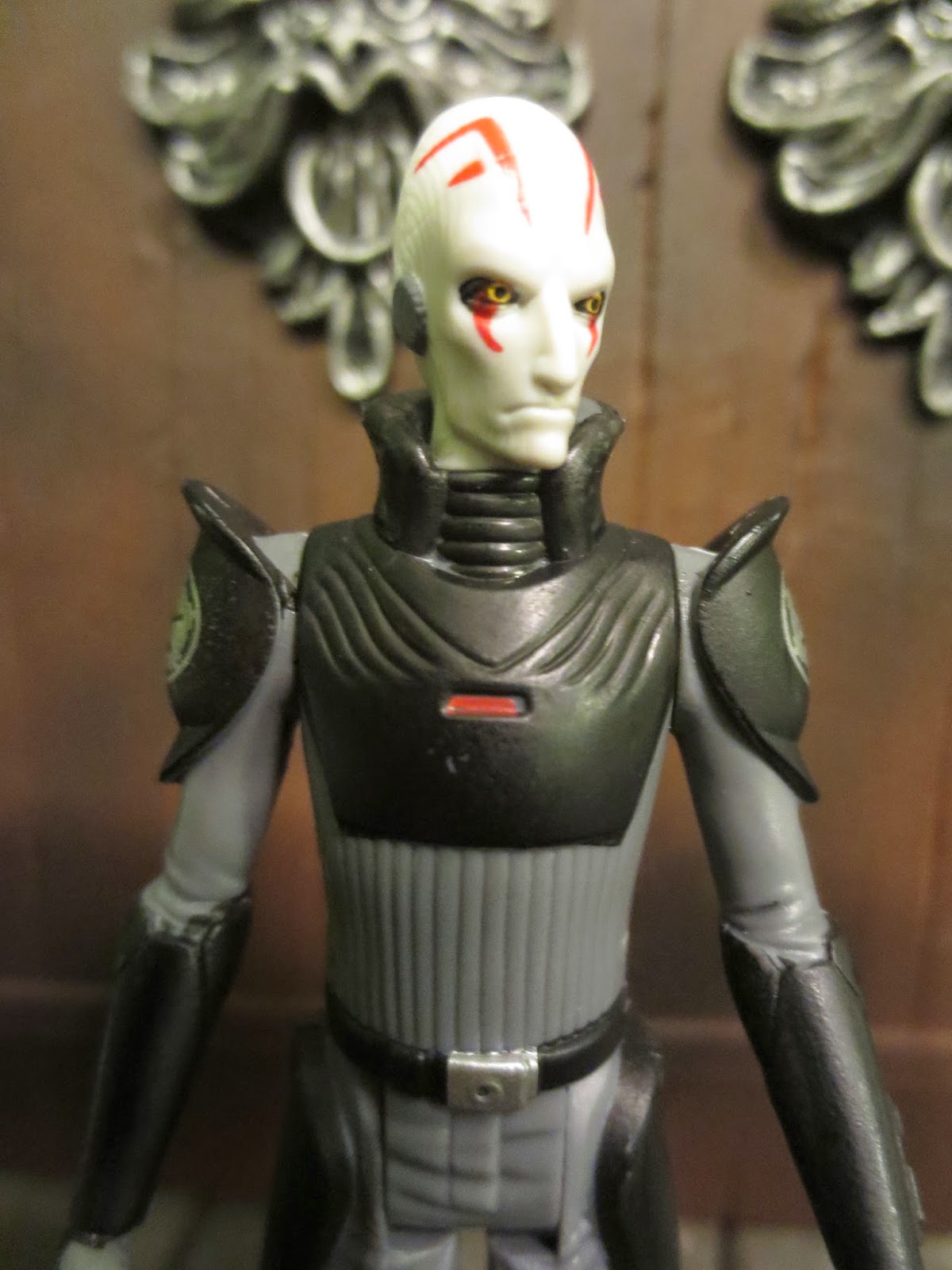 *Well, he's only got 5 points of articulation. Yeah, Hasbro decided to release the Rebels figures in the same style as the 5 POA Saga Legends figures. While the figure feels solid, it is really pretty lame that a Sith inspired warrior like the Inquisitor can basically only stand around or hold his double bladed saber out with one hand. Looking at this guy, I really wish he at least had ball jointed shoulders and elbows. It's disappointing to get a cool new character in such a limited form.

* I really wish his lightsaber handle had a bit more detailed paintjob. The sculpt is good, but it just looks so flat. Maybe a little silver would have made it look better? 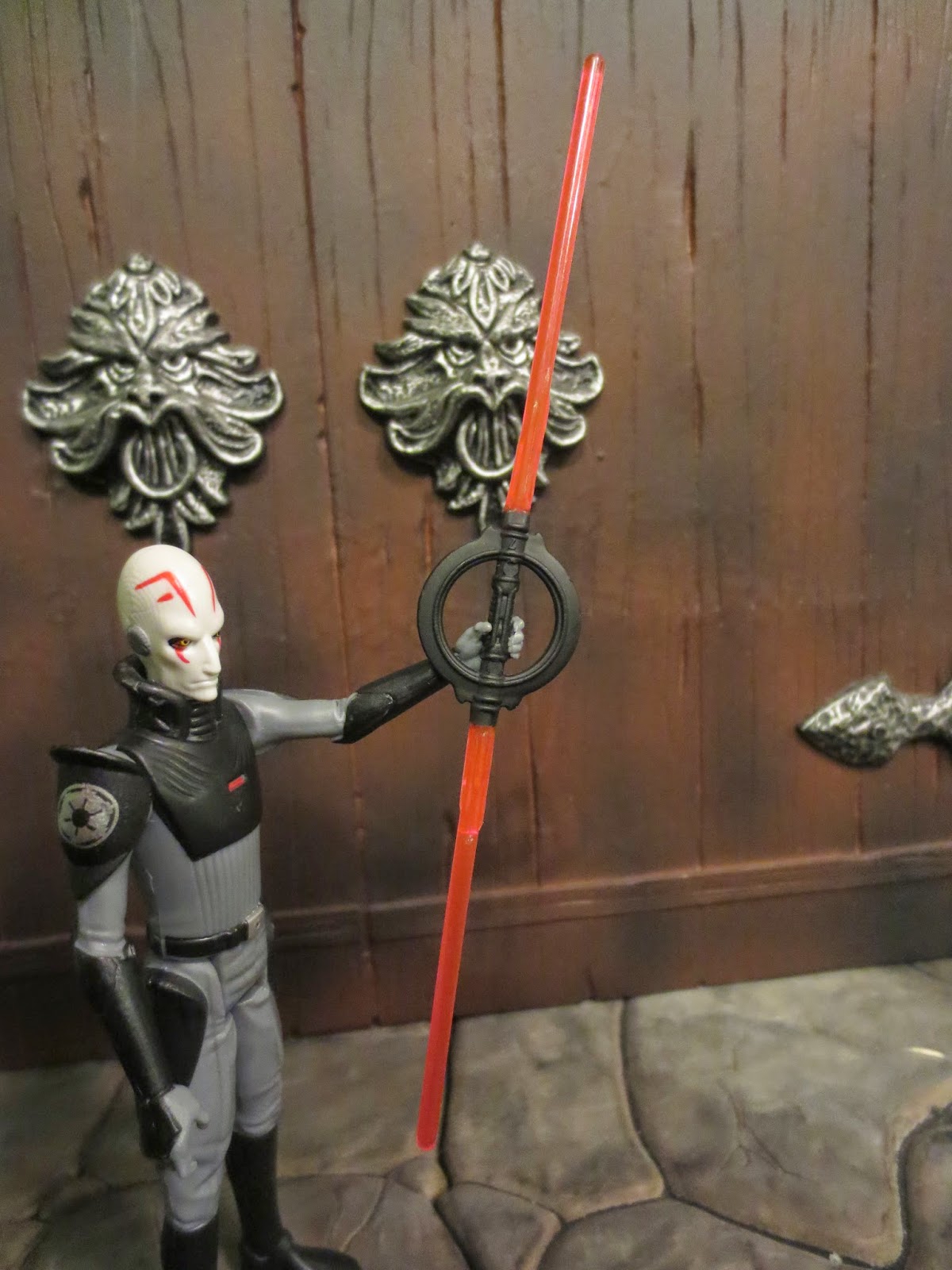 I don't really have anything much negative to say about this figure except to comment on the limited articulation. I'm really amazed that Hasbro went this direction with the Rebels product. Honestly five points of articulation on a bipedal character is just insanely limited. That's the same amount of articulation as the original Darth Vader from 1978. Let that sink in for a second. I get that Hasbro is trying to keep prices low, but it's rather disappointing that we're not seeing the main Rebels cast done a bit better. Overall, I'm giving the Inquisitor a Good and a 1/2 rating. He's looks awesome but there's just so little you can do with him. I'm really hoping that Hasbro releases the Rebels cast in The Black Series (I'd take them in both 1/18th and 6 inch), but if this is all we ever get, than I'm disappointed. There's a great figure here, he just needs to be able to move a little.