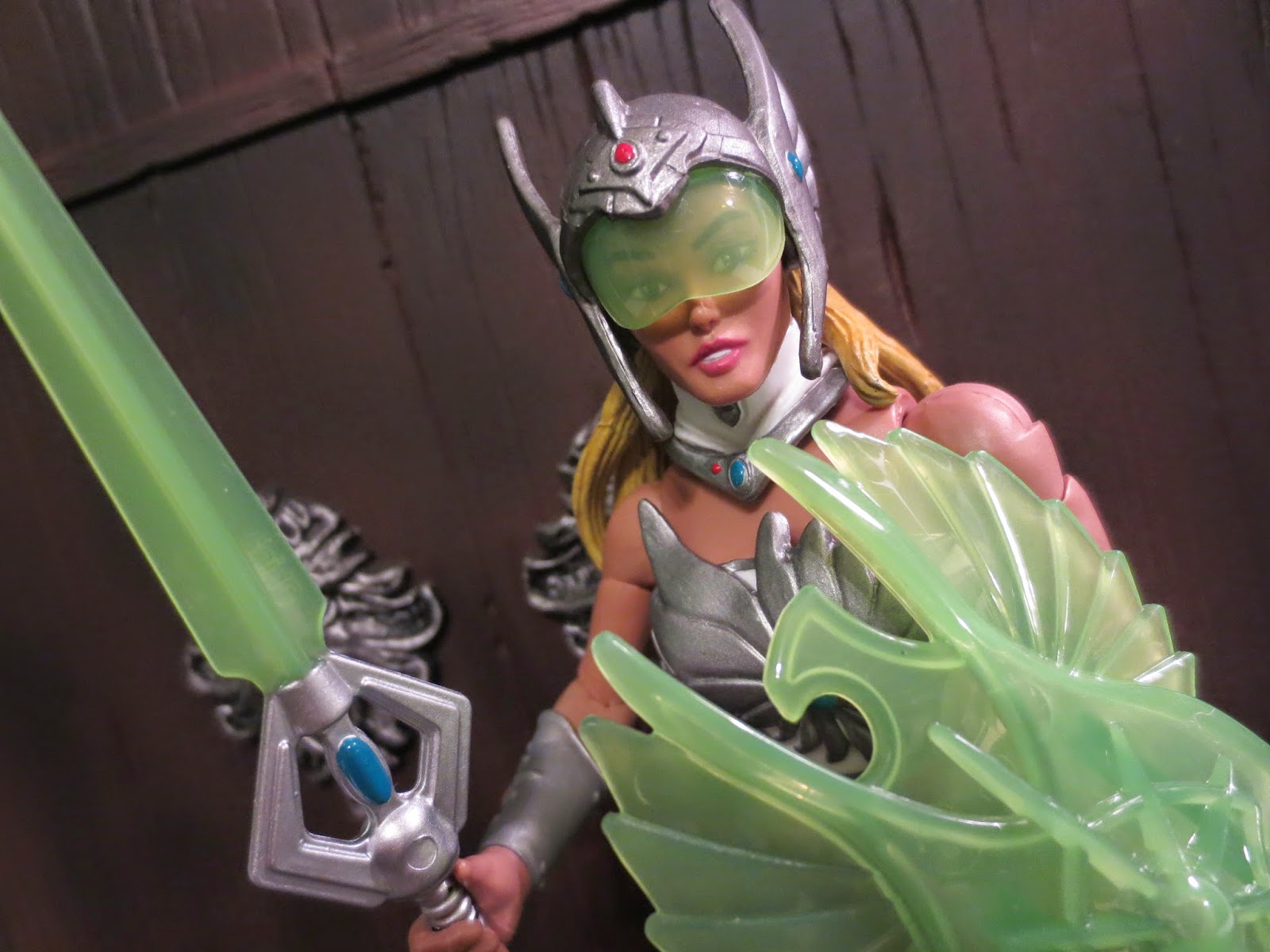 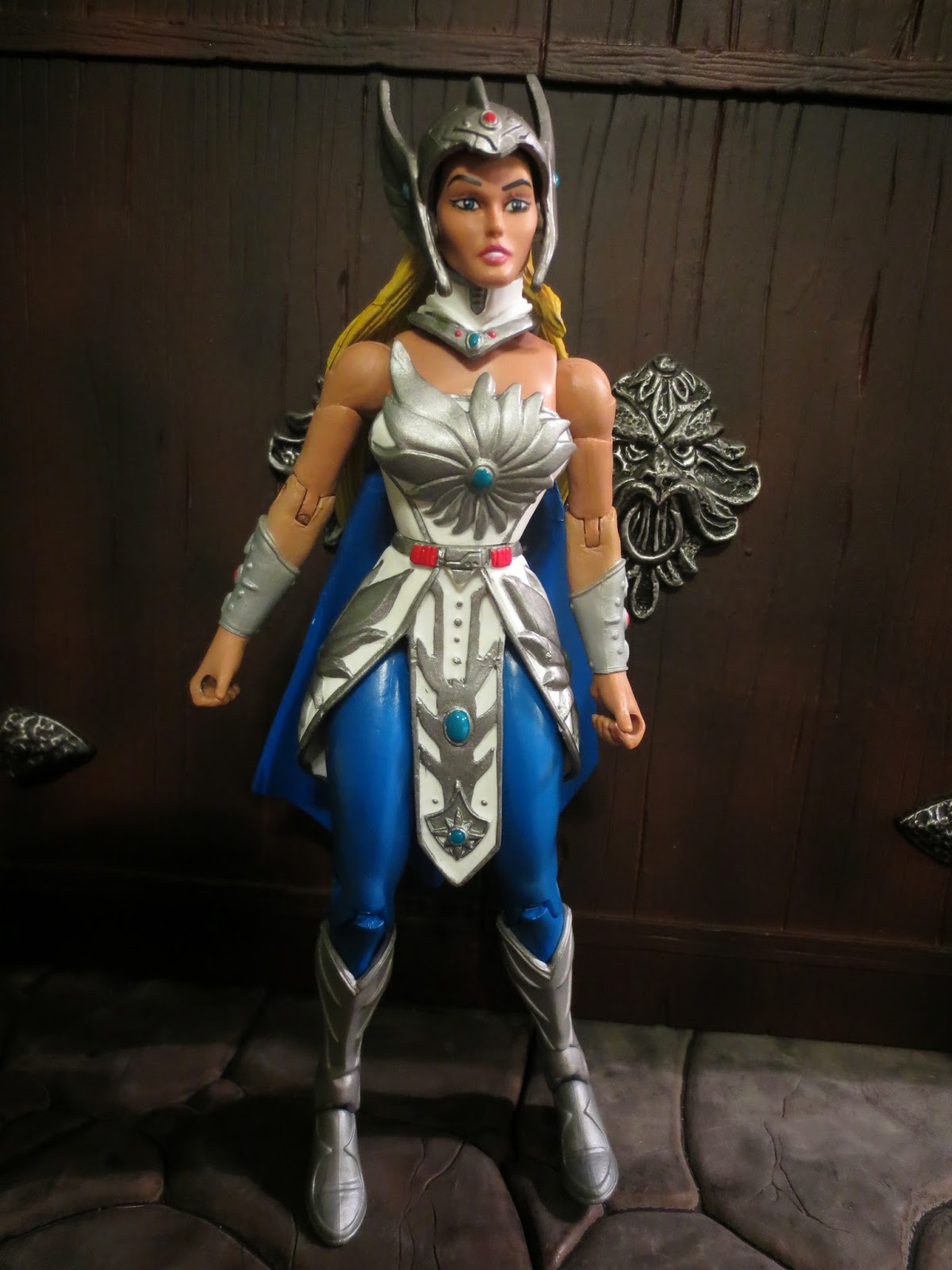 Accessories: Futuristic sword of protection, shield, belt with holster, pistol, removable visor, and a cape with a sheathe. 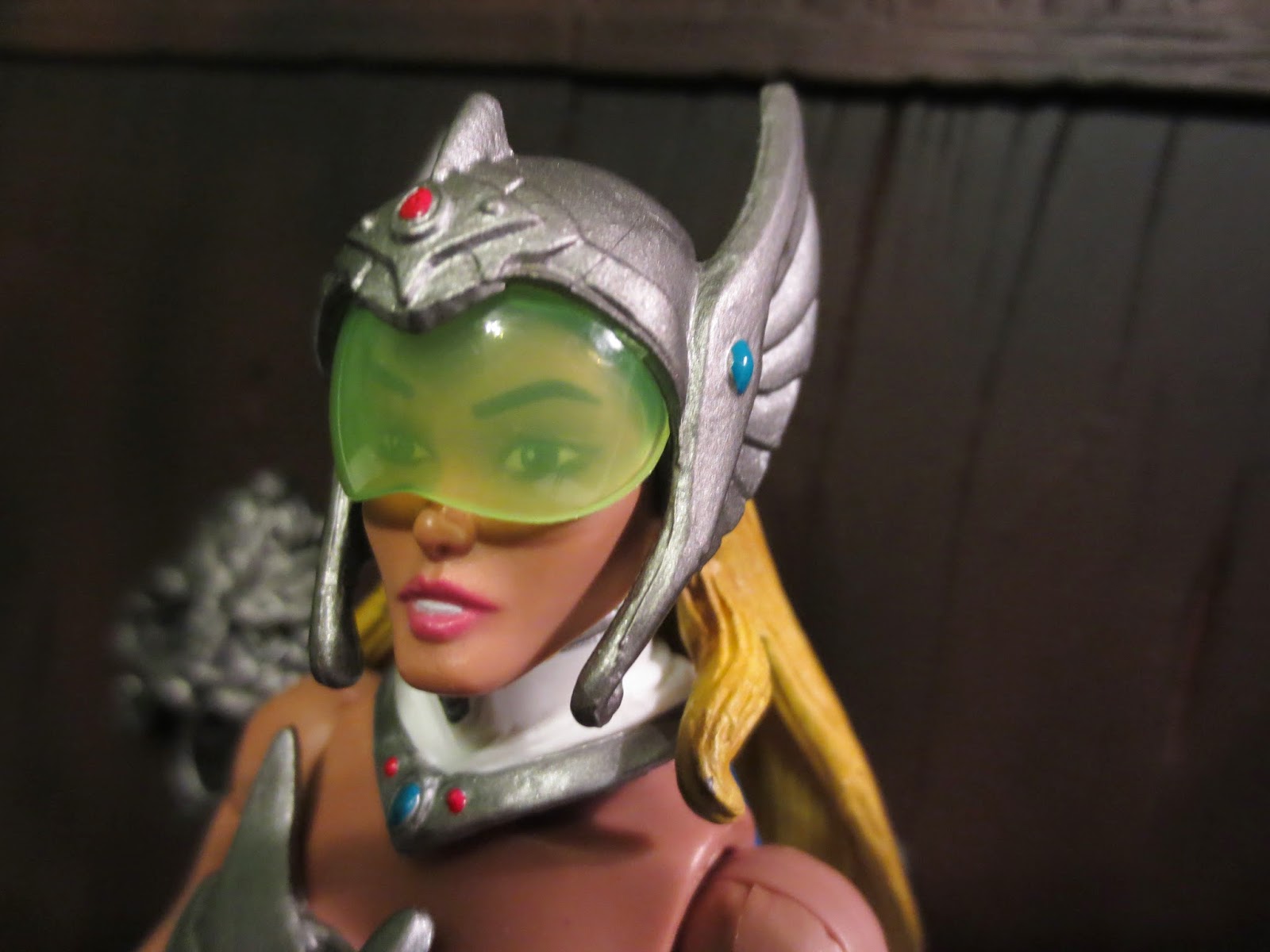 * I love the portrait on this figure! The helmet is just awesome as it nicely blends She-Ra's fantasy based tiara with a more sci-fi styled helmet. Plus, the removable goggles really look great in person. They stay on securely, are easily removed, are unnecessary if you don't like them! They helmet looks fine with the goggles removed! 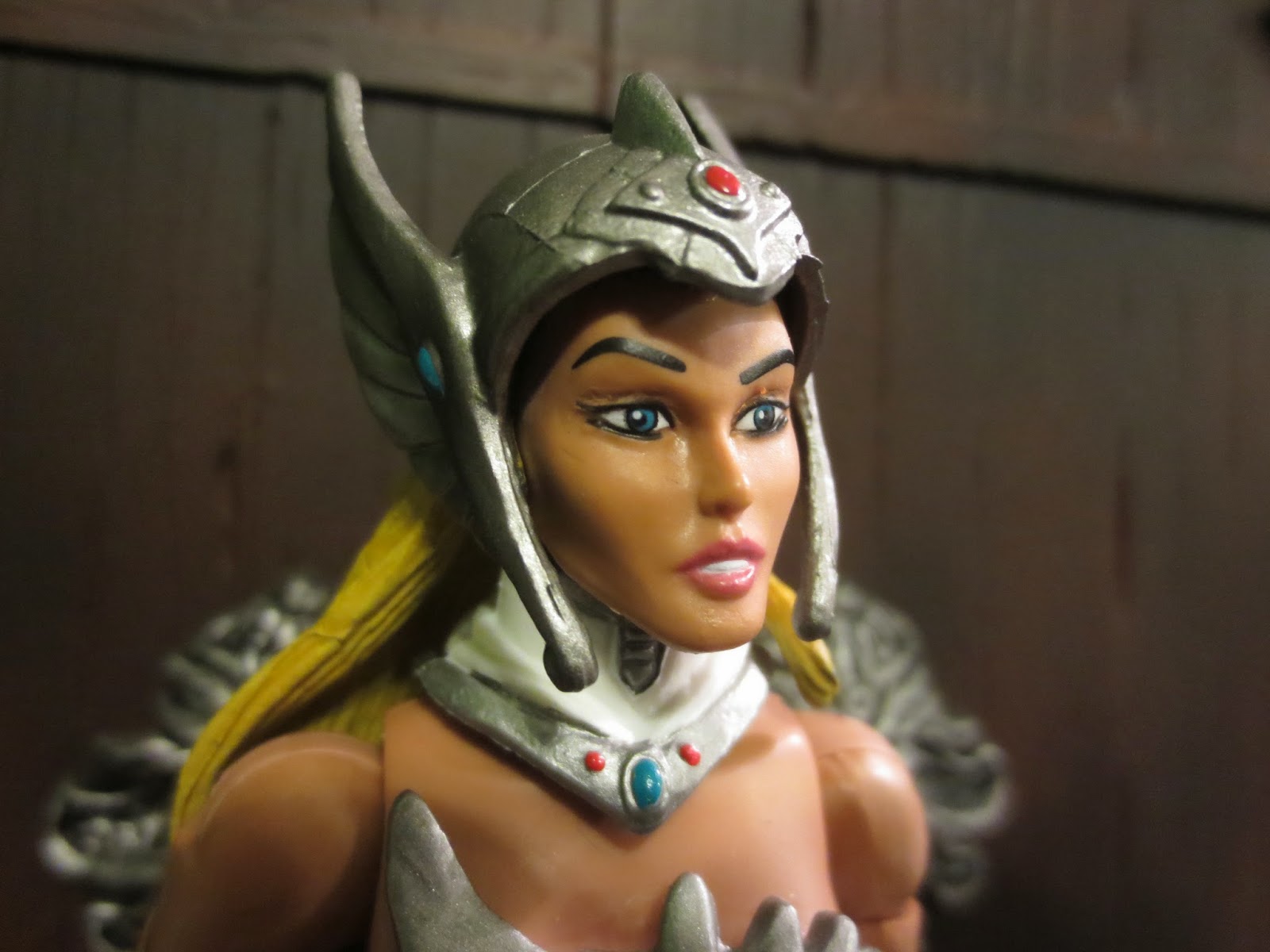 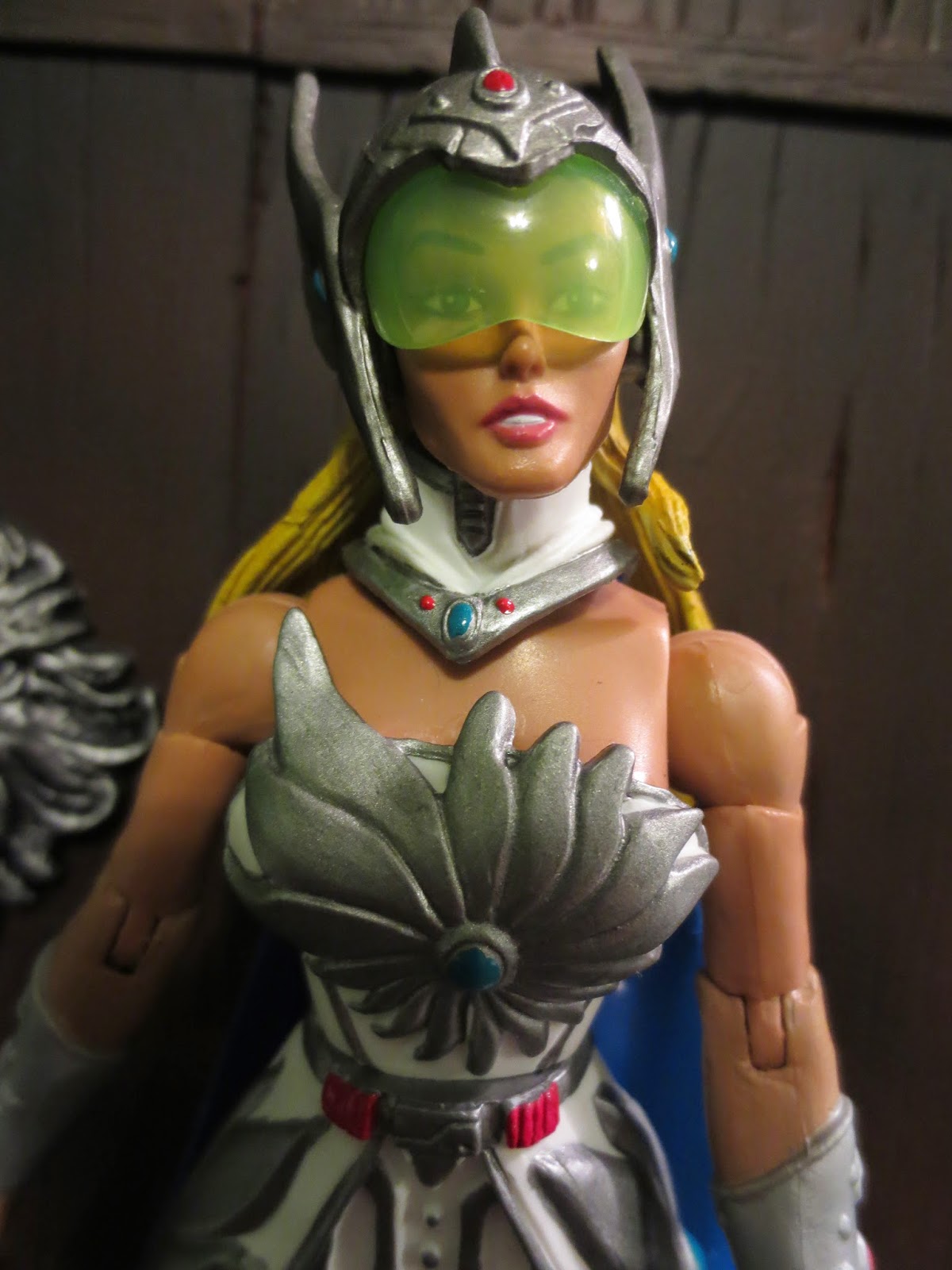 *I really like the design choices made here to translate She-Ra's "look" into the New Adventures aesthetic. While she has white and silver instead of red and gold, both Glactic Protector She-Ra and Galactic Protector He-Man utilize blue and translucent green to convey the futuristic nature of their outfits. I'm really intrigued that She-Ra's outfit, while futuristic, has a more organic vibe to it than He-Man's more mechanical looking outfit. It's an interesting look for She-Ra that I'm really digging. 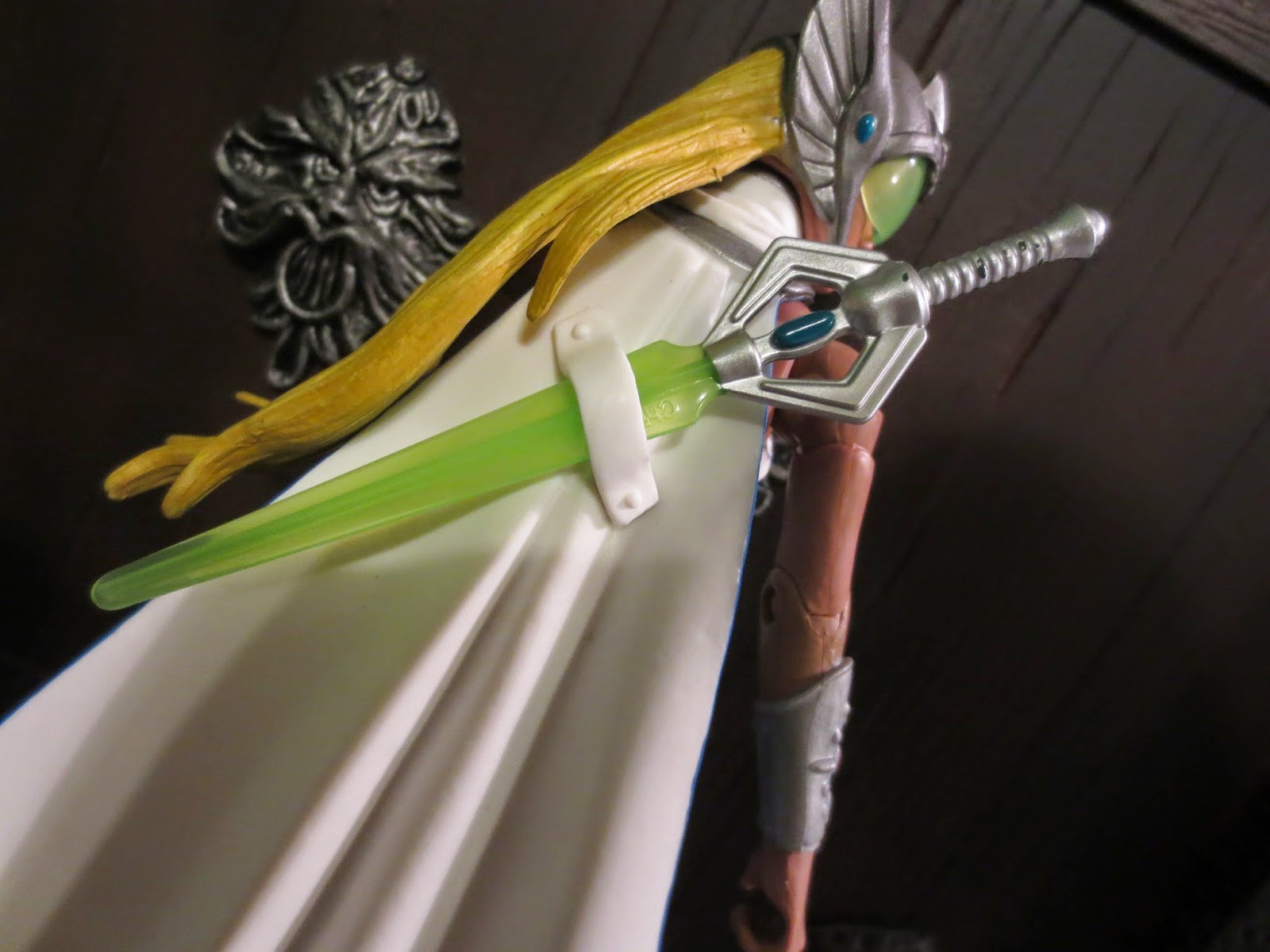 *Not only is She-Ra's cape really cool (I love the neck clasp) but she comes with this awesome sword. This is one of my favorite accessories and I think it manages to capture the futuristic spirit of New Adventures quite well. Plus, it also has a handy sheathe attached to the back of She-Ra's cape. 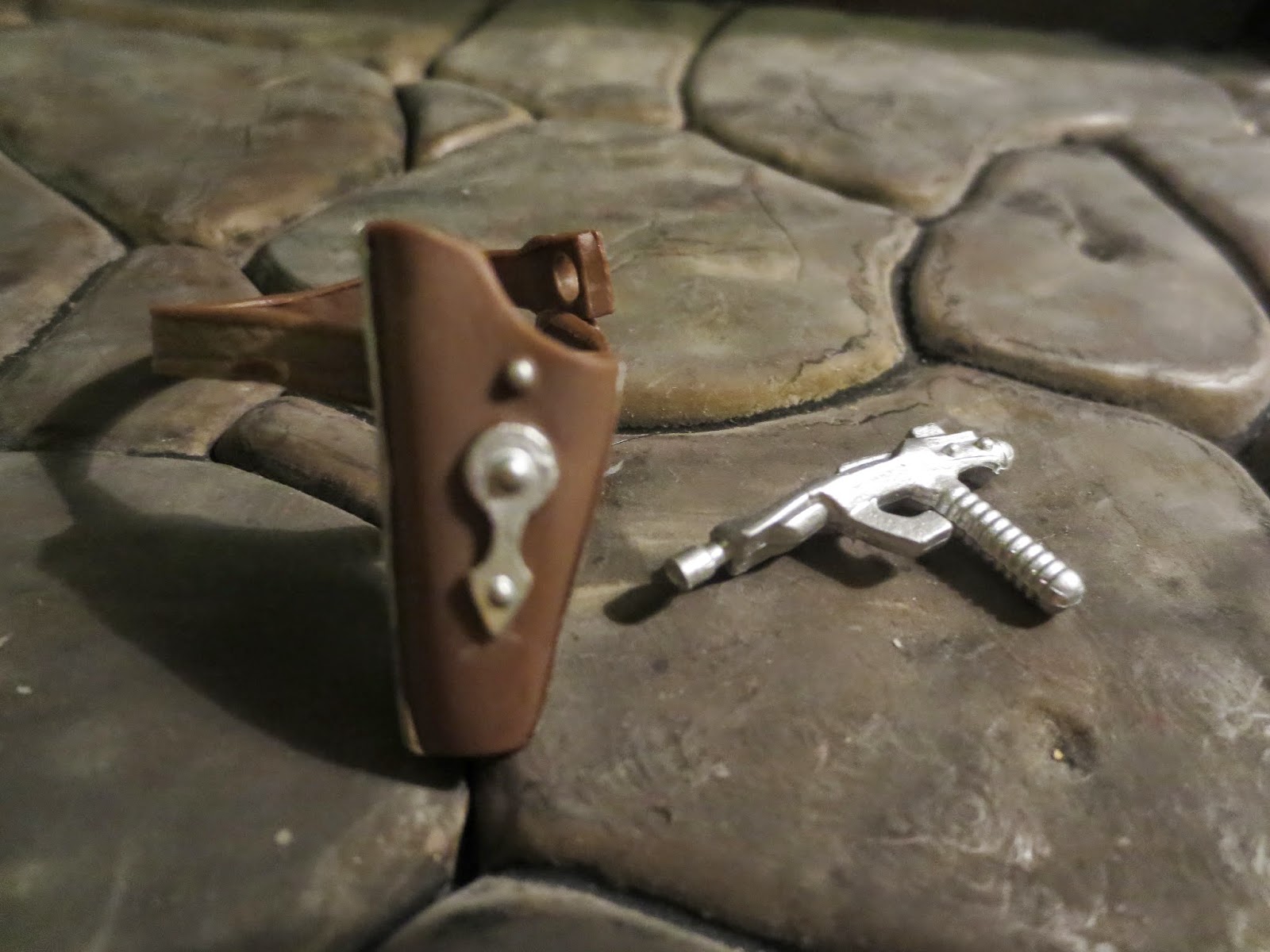 *She-Ra also comes with this cool pistol and holster. It's easily removable, looks great in her hands, and gives her a very cool vibe. It also kind of ties her in with the Adora figure since Adora carried a pistol and a holster as well (not a lot of MOTUC figures carry pistols in holsters, so it is a bit more unusual here than in other toy lines). 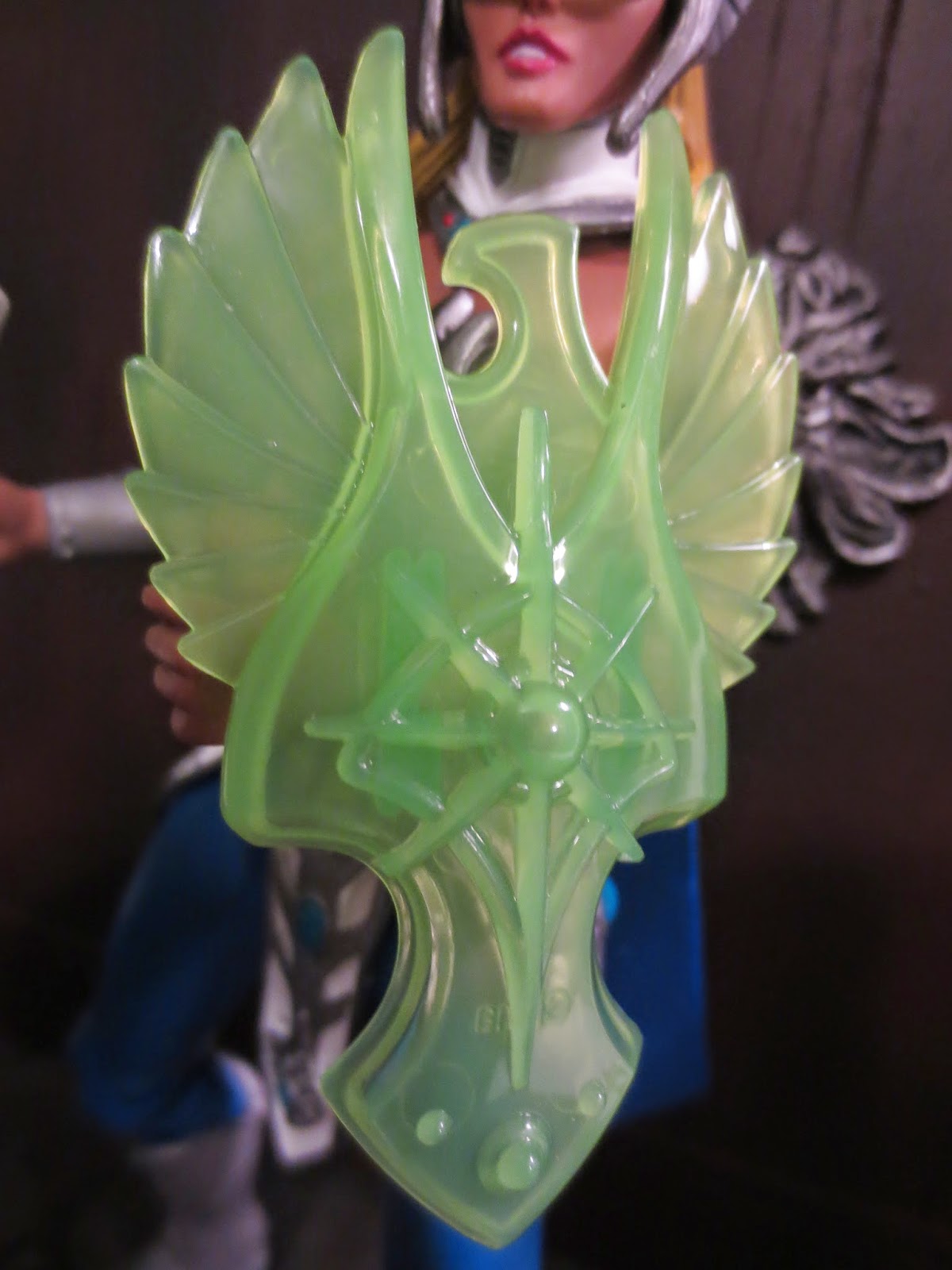 * What a cool energy based shield! This picture kind of washed things out a bit, but the bright green of the shield looks awesome. Also, it is interesting that both She-Ra and Seahawk have energy shields that look like birds. Coincidence? Probably. 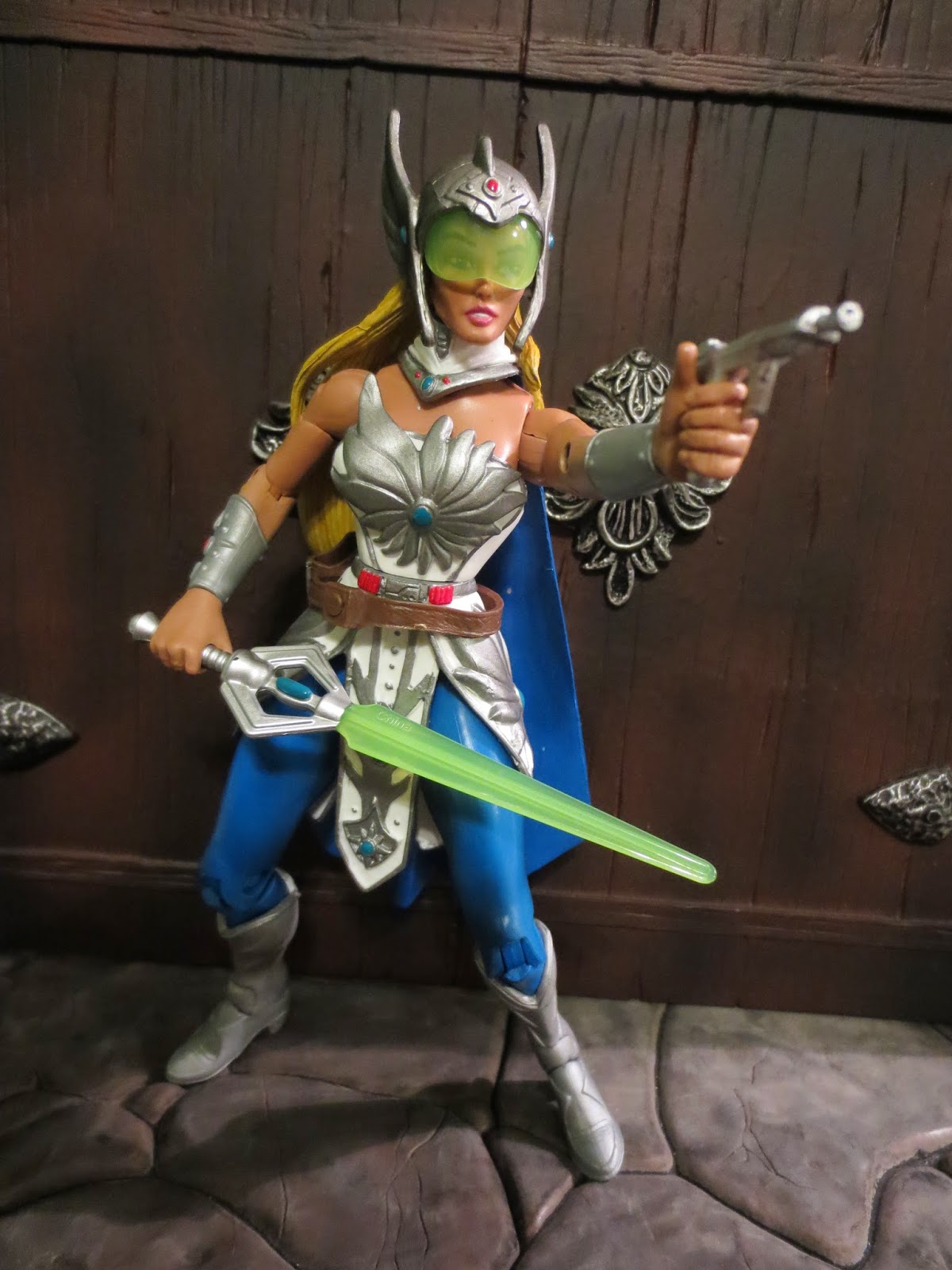 *Nothing. I don't have a single bad thing to say about this figure. She is amazing! I kind of feel like this figure might not be as well received by others as it is by me as it is simultaneously a Princess of Power figure, a New Adventures figure, a variant, and a newly created figure that some fans will have just out of spite since it might have been created by former brand manager Scott Neitlich. Regardless of all of those things, I think this is a beautiful, fun, well designed action figure. She has plenty of accessories, great paint, sculpting, and quality control, and the ability to have a few different looks. It's rather interesting that some of the coolest MOTUC figures have been New Adventures characters, but I won't complain. I'm giving She-Ra an Epic and am easily moving her up my list to being one of my favorite MOTUC figures of 2014. You go girl! Now bring on New Adventures Teela!