Action Figure Review: Tung Lashor from Masters of the Universe Classics by Mattel 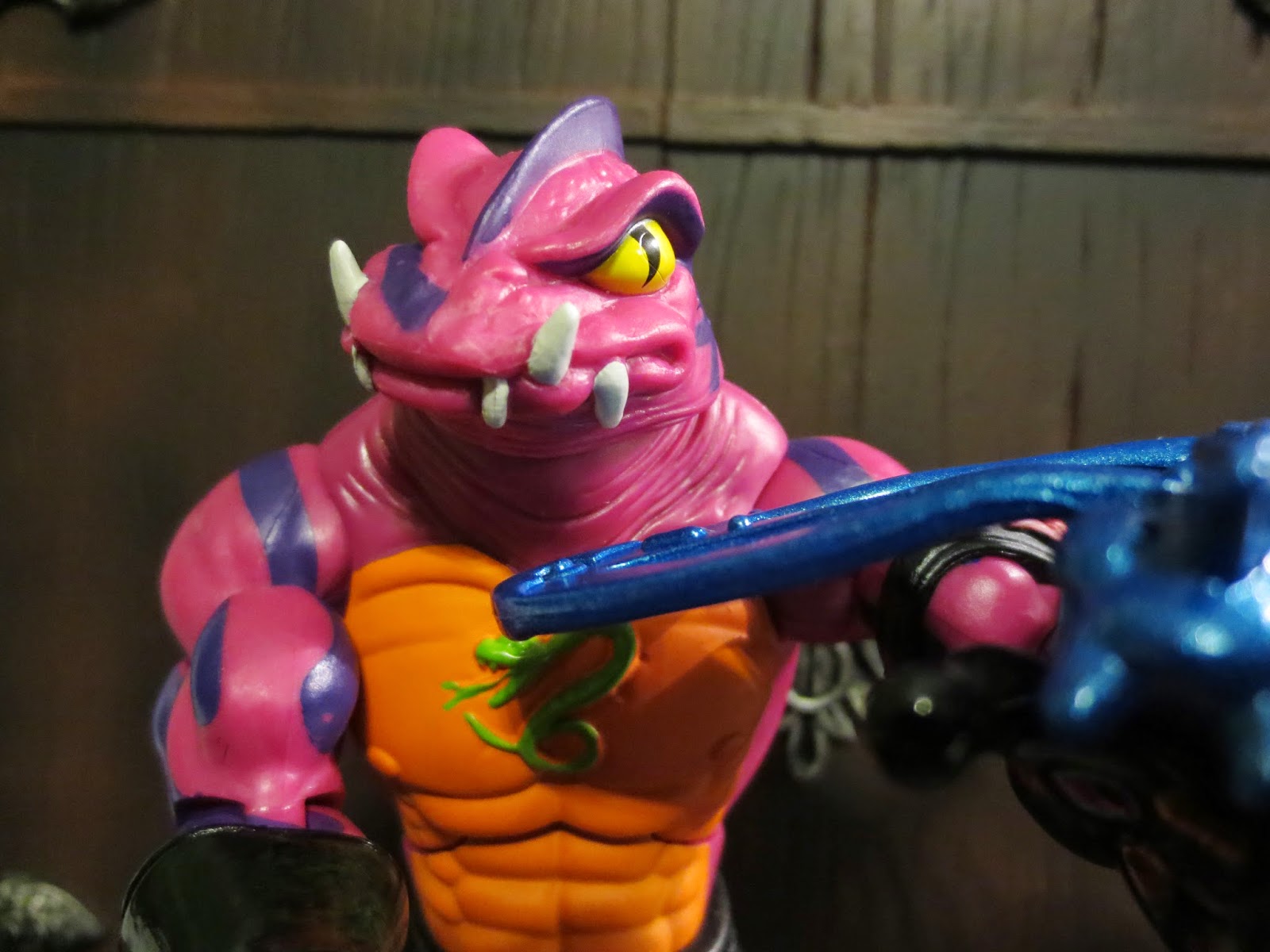 One of the most exciting things about Masters of the Universe Classics wrapping up its 6th full year is that we're coming closer and closer to completing the entire vintage line of action figures. With the release of Tung Lashor, who I'm reviewing today, we're only one figure away from completing the Snake Men (we still need Sssqueeze) and two figures away from completing the first five years of figures from the vintage line (we still need Dragstor and Multi Bot from the 1986 series). Besides being able to check off a box, though, Tung Lashor is one of the most exciting action figures to be released in MOTUC this year. I've been ranking every figure this year as I receive them and I'm happy to report that Tung Lashor is in the top three. He's an excellent reminder of what I love about this line. Here's more details about him after the break... 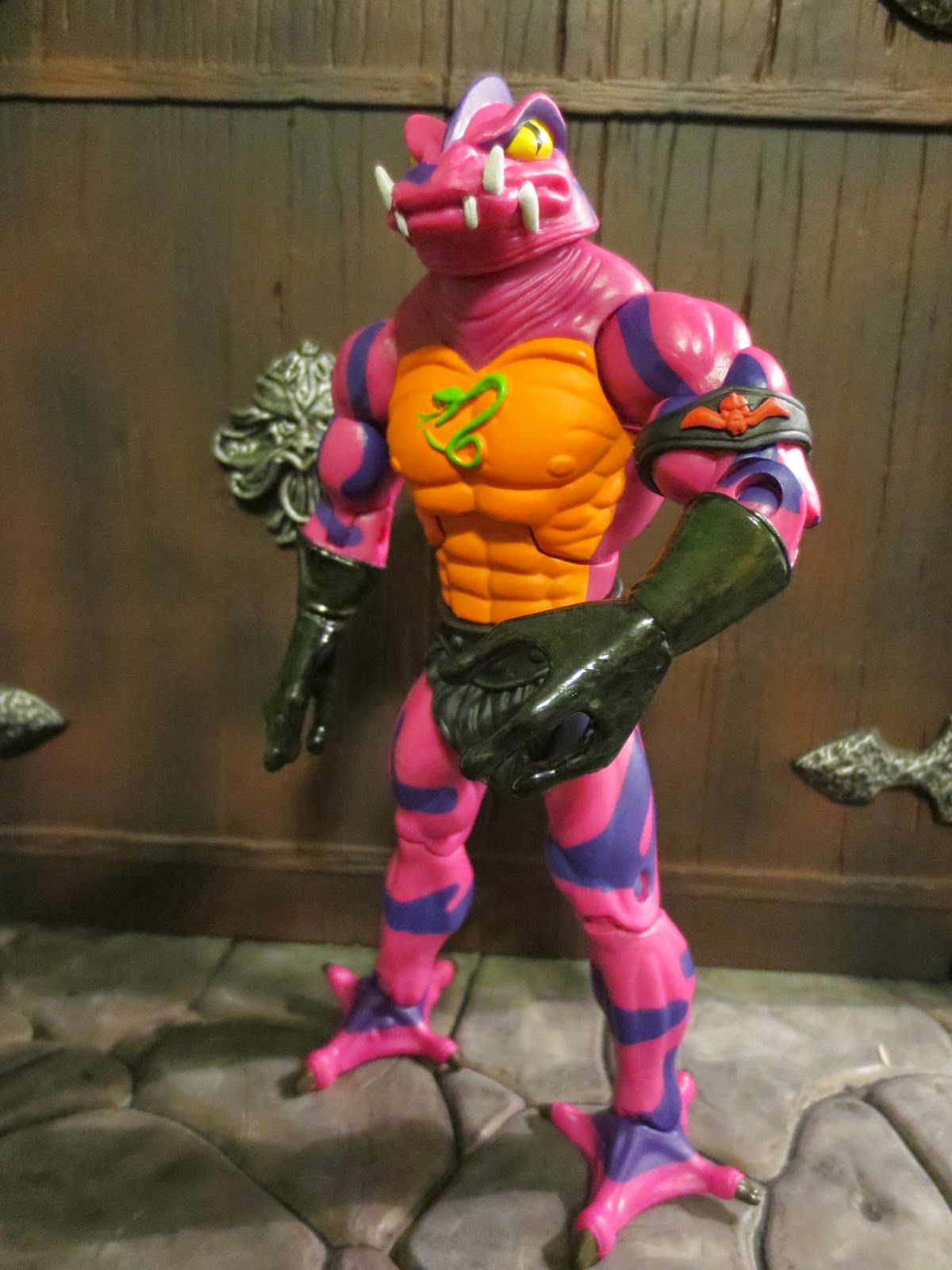 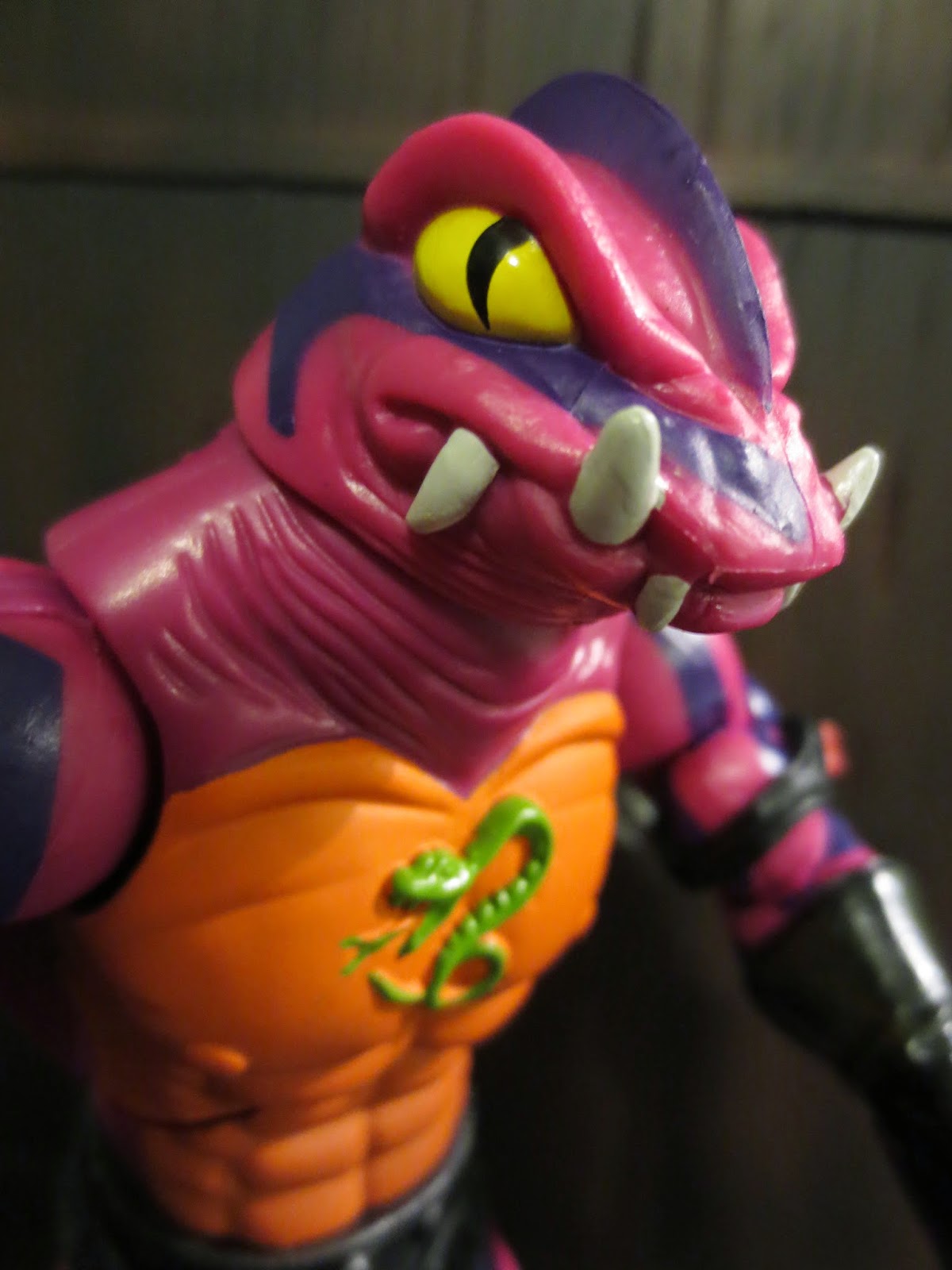 *The first thing that strikes me about this figure is the vibrant color scheme. I love the contrast between the bright and darker purples that make up Tung Lashor's skin and the bright orange belly. I also dig the glossy black hands; they just look like they belong on a slimy swamp creature like ol' Tung Lashor here. Believe me, this guy will stand out on your shelf in a good way.

*Tung Lashor features a few cool newly sculpted parts such as his long fingers, his clawed, lizard-like feet, and his wart covered tors, but the most impressive element are his heads. You can swap out his closed mouth head for one with the tongue hanging out to replicate his vintage action feature of a flicking tongue. The expressions are different on the two heads and the long tongue looks really cool and dynamic. I'm not sure why there is a set of teeth on Tung Lashor's tongue, but I kind of dig it. It's weird, but in a cool way. 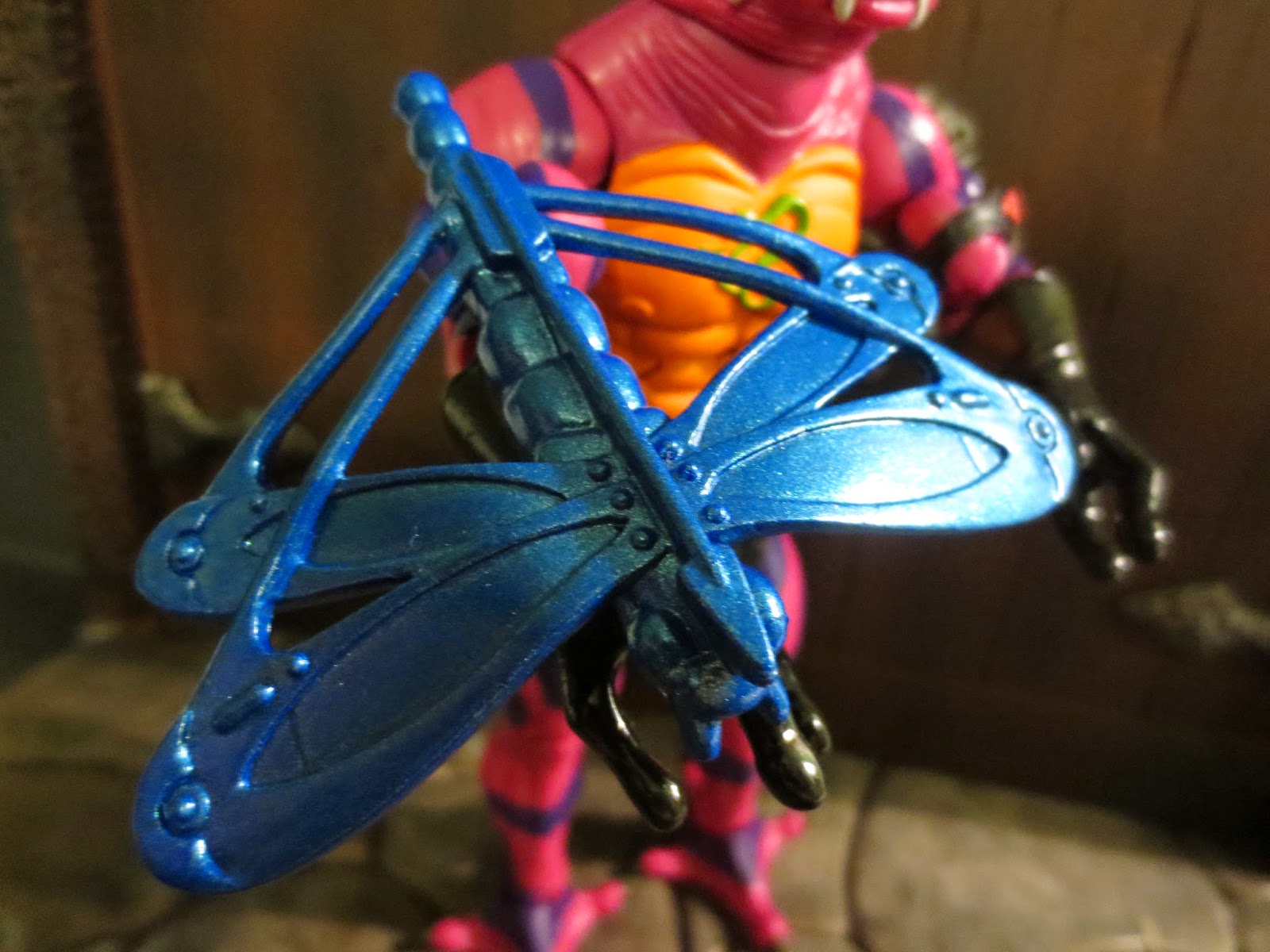 * Tung Lashor comes with upgrades of the two very cool accessories that came with his vintage figure: A Snake Staff and a Dragonfly Crossbow. While we've seen the Snake Staff multiple times before with other figures, the Dragonfly Crossbow is a brand new accessory that just looks awesome. I love the metallic paint scheme of the crossbow. See, solid colored weapons can look OK just as long as they are given a metallic paint scheme. 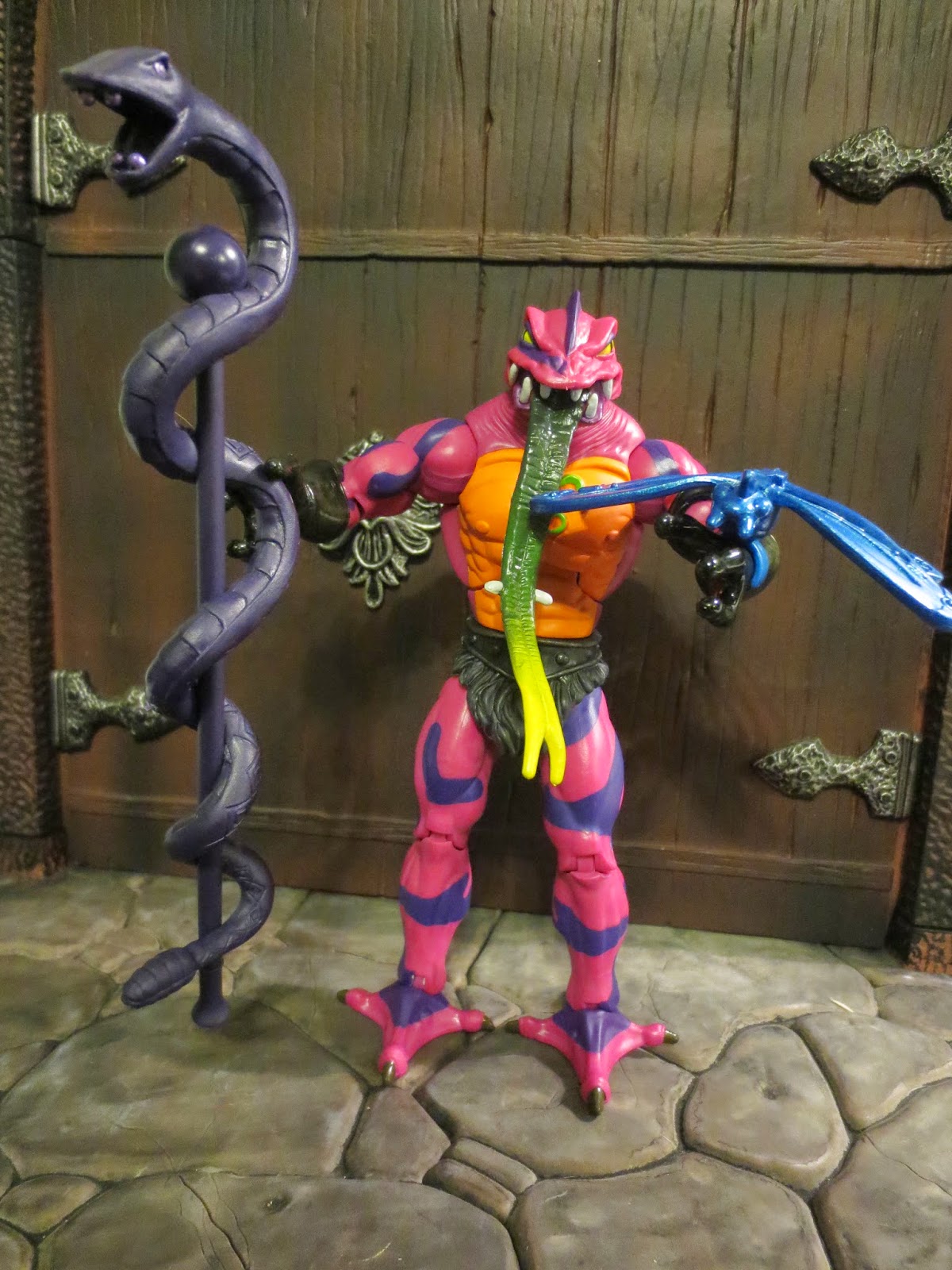 *Other than lacking hinged ankles, Tung Lashor's articulation is fabulous. His torso really allows for some excellent shoulder movement . I wish every figure could almost fold their arms the way Tung Lashor can.

*As a neat little nod to the Filmation cartoon (where Tung Lashor was a member of the Horde), Tung Lashor has a removable Horde arm band similar to Rattlor and Hordak. It's nothing groundbreaking, but it's cool that someone at Mattel thought ahead to include this little extra. 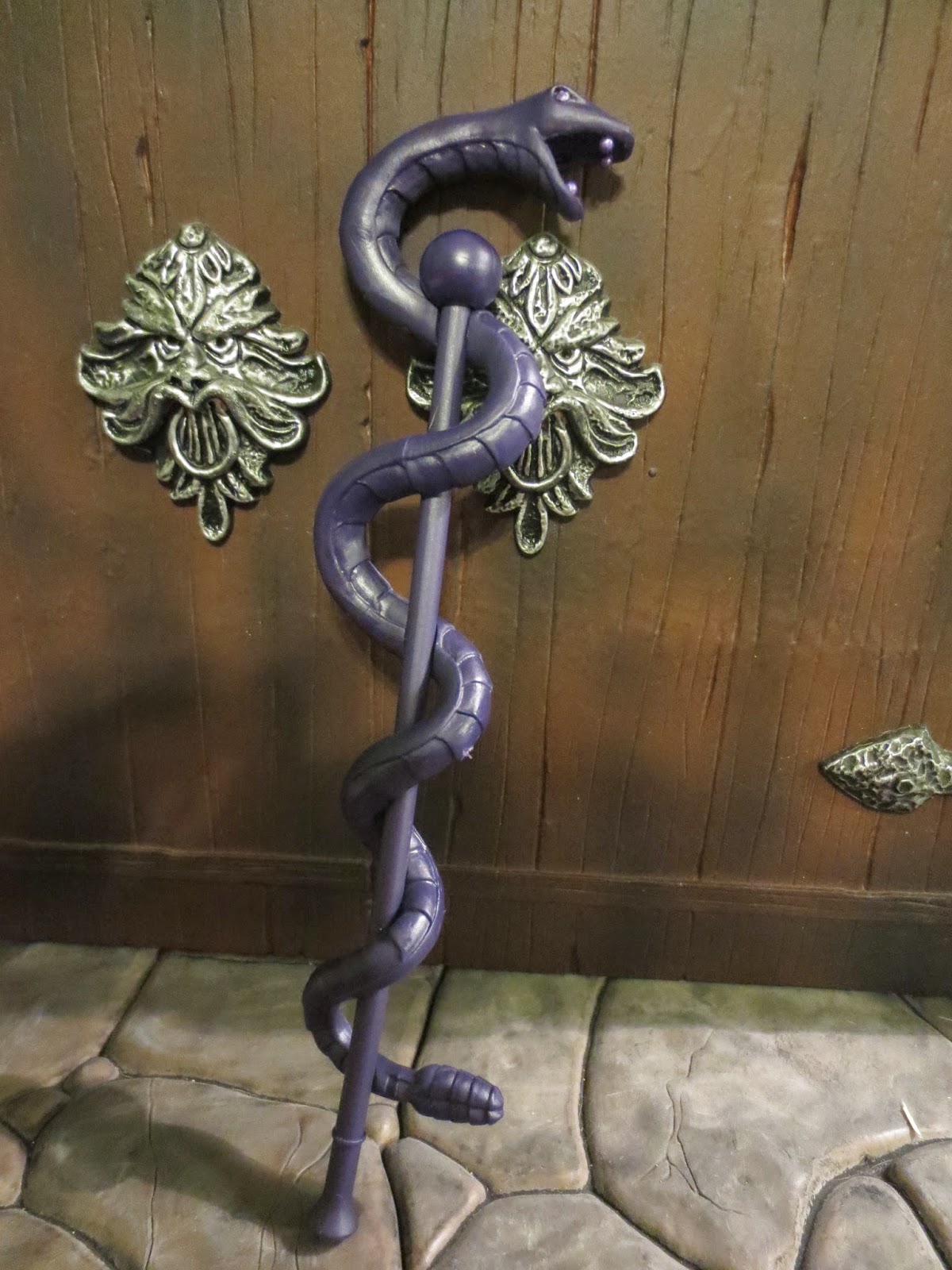 *My only negative is that swapping the heads on Tung Lashor does not feel as natural as on most other figures. Maybe I just need to use a little hot water or something, but the heads are difficult to swap. Not sure what's different here than on every other figure in the line. 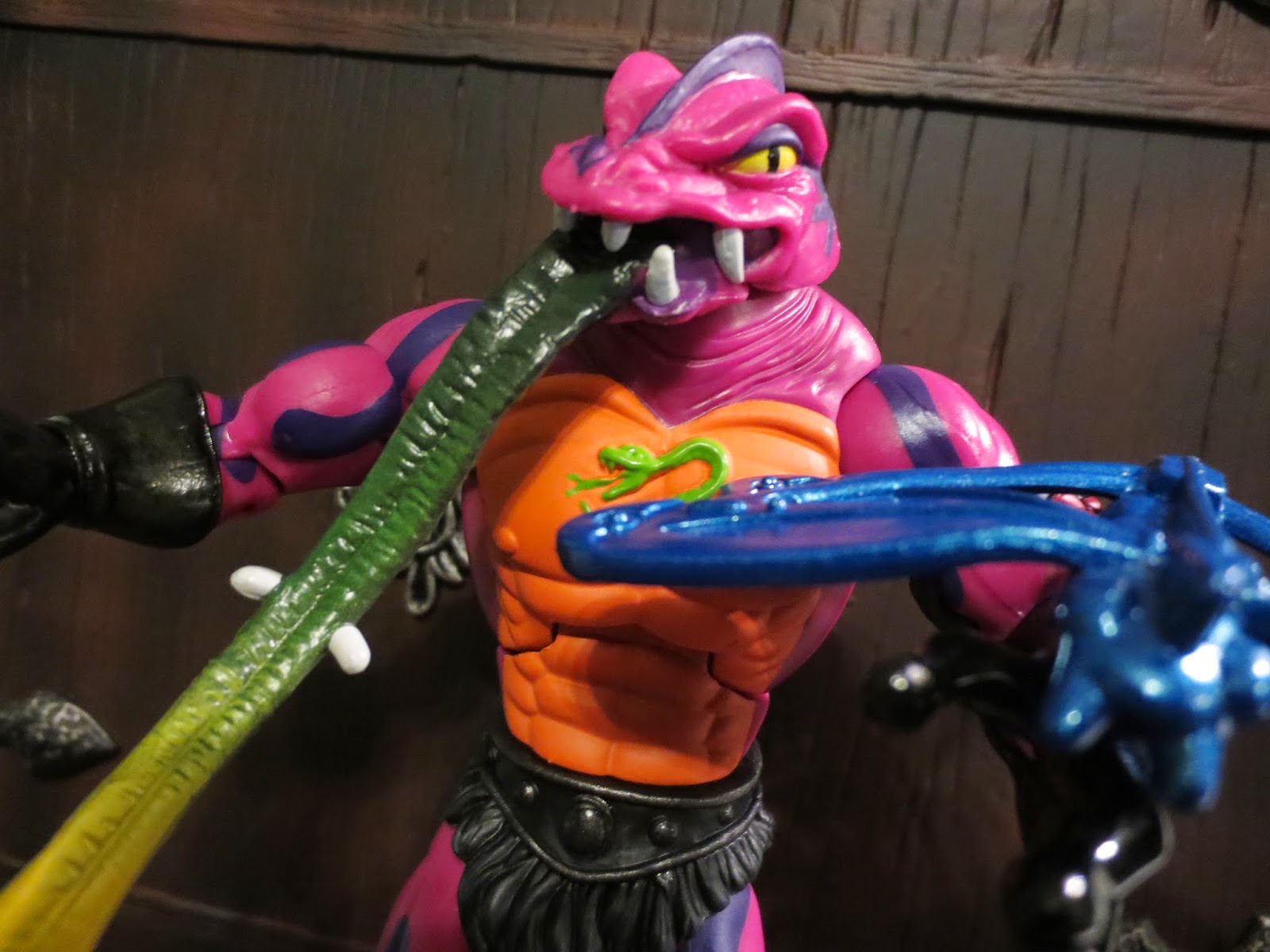 I really love this guy! He's just so well designed and colorful that he stands out from the crowd, something that can be tough to do in the crazy Masters of the Universe universe. While folks (myself included) like to complain about some of the weirder decisions that are sometimes made in this line and the hassle that sometimes arises when trying to purchase these figures, Tung Lashor is an example of why we continue to buy these: They're solid, fun, unique, bizarre, well made toys that are just laced with pure nostalgia. Tung Lashor gets a Great and a 1/2 rating as he is easily one of the best MOTUC figures to come out this year. If you haven't snagged this penultimate member of the Snakemen, I'd advise you to grab him as soon as possible before he wriggles away.