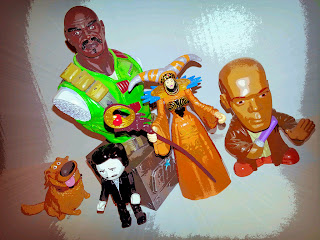 Sometimes an action figure is disappointing. Sometimes the likeness is just off, the articulation a little too loose, or the paint a bit sloppy. Other times, you find an action figure that just deserves to be put out of it's mercy.  Years ago, ToyFare magazine used to cover these abominations in a section called "Castaway from the Island of Misfit Toys." This is my tribute to that great publication of which I still keep a few copies by my toilet at all times.
A few years ago, I stumbled across a pretty cool set of Power Rangers figures from Bandai.  They were around 4 inches tall and included the 6 original rangers, Alpha 5, a Putty, and Goldar.  They weren't the best action figures ever made, but they were rather inexpensive and a cool way to get some Power Rangers figures into my action figure display.  I've talked plenty about my history with the Power Rangers here, so I won't go into it too much. I'll simply say that while I remember Lord Zedd and Ivan Ooze, Rita Repulsa was the main villain for the Power Rangers during the brief time I watched the show.  I remember as a kid always wondering why the main villain never made it into the toyline when we got nearly all the other bad guys (even Finster, who was my favorite for some weird reason). Anyways, Bandai continued to release some random figures from the original Mighty Morphin Power Rangers series in various waves, and Rita Repulsa here shipped as part of a Power Ranger Samurai series.  When I first saw her in stores, my initial reaction was "Oh my gosh! A Rita Repulsa figure!" My second impression was something between shock and that disappointing look your family gives you when you finally reveal to them that you're using your college degree to open a combination magic shop/sushi bar.  If just looking at this figure doesn't give you too bad of a headache, then read on after the break....


Rita comes in right around 4 1/2 inches, which is a little short as your average turd appears to be right around 8 inches (seriously, I fact checked  that on WikiAnswers).  I'll defend my honor for a moment by stating that I did not pay full price for this figure. I found her at a Ross' and paid less than $2 for her, which is about $1.78 too much if you ask me.  I told myself that by removing her from the shelf, some poor kid wouldn't end up getting this toy as a stocking stuffer, leading him or her to believe that Santa Claus hates him.  Because that would screw a kid up.

Rita Repulsa has more articulation than your average Happy Meal toy, but less articulation than a 6th grader giving a report on 19th century agrarian business practices that they downloaded from the internet. She's got ball jointed shoulders, swivel biceps, and a swivel head.  Yup.  That's it.  Hey, that's nearly as much as one of those roto-cast Evil Space Aliens from about 20 years ago!  She has enough articulation to hold her staff, do that arm flapping motion that JGL did in Angels in the Outfield, and get locked in a space dumpster. 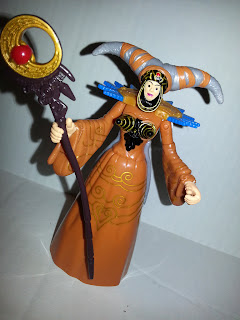 I will say that there are parts of this figure that are impressive, which is kind of like saying that it's impressive that the doors are still attached to the bathroom stalls in a blown up gas station.  It's really weird that some of the detailing on the figure is fairly decent. Her sleeves, the large gray fur on her back, and parts of the headdress look fairly well done.  The paint isn't bad, either, as it's very clean.  The staff seems fairly show accurate, although it's so bendy that you literally can tie it in a knot. Yup, just tied it in a knot, so I'm not just making stuff up here.   But seriously, take a look at the face.  It's hideous. Seriously, there are M.U.S.C.L.E. figures and McFarlane Walking Dead figures that have better face sculpts than this.  This Rita Repulsa isn't going to make any monsters grow.  Oh, and check out her chest cones.  They're ridiculously...pointy. Seriously, Madonna would shake her head and mutter to herself: "too far, too far" if she caught a glimpse of those.  If you're not careful when playing with this figure, you might accidentally draw blood.  Are they meant to be an offensive weapon of some kind?  Overall, this figure is a mess.  If it had been released during the height of Power Rangers mania in 1993, back when toy store managers were able to vomit into a plastic bag, write "Power Rangers" on the side with a sharpie, and sell it for Grandma's Social Security check, there's still no way this figure would have been purchased.  The only positive things I have to say about this figure is that there is a bit of decent sculpting and the figure hasn't tried to kill me in my sleep. Yet.
Posted by Barbecue17 at 12/03/2014