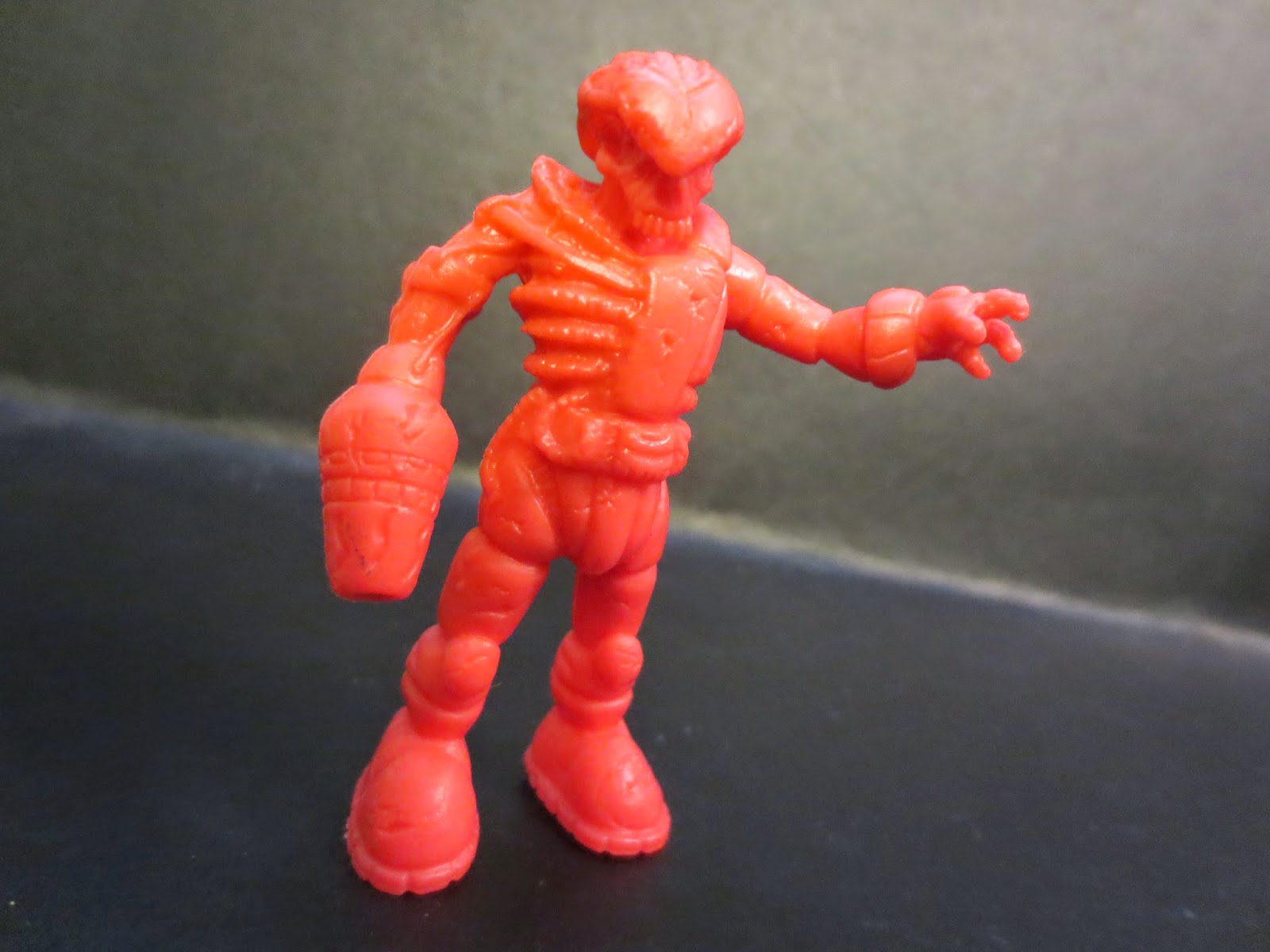 Now molded in hot pink plastic, this is the latest color variant of the original Zombie Pheyden figure that was one of the stretch goal/ bonus figures back when the OMFG! series 3 Kickstarter campaign was running.   Based on Pheyden, a space traveler from the Glyos System of toys, Zombie Pheyden is a creepy little minifigure that is based on a design by Matt Doughty/ L'amour Supreme and sculpted by George Gaspar. Pheyden is a neat little mini that should easily blend in with multiple minifigure collections. He's actually around 2 1/4 inches tall which makes him a little taller than your average minifigure from lines like OMFG, M.U.S.C.L.E., MWOTR, S.U.C.K.L.E., and Monster in My Pocket, but his design works as a taller, alien like creature. Remember that he is a solid PVC figure with no articulation. I'm not sure what the AP stands for, but the Hot Pink color is perfect for getting your minifigure fix when hanging out on the beach or something. The other three W's are after the break... 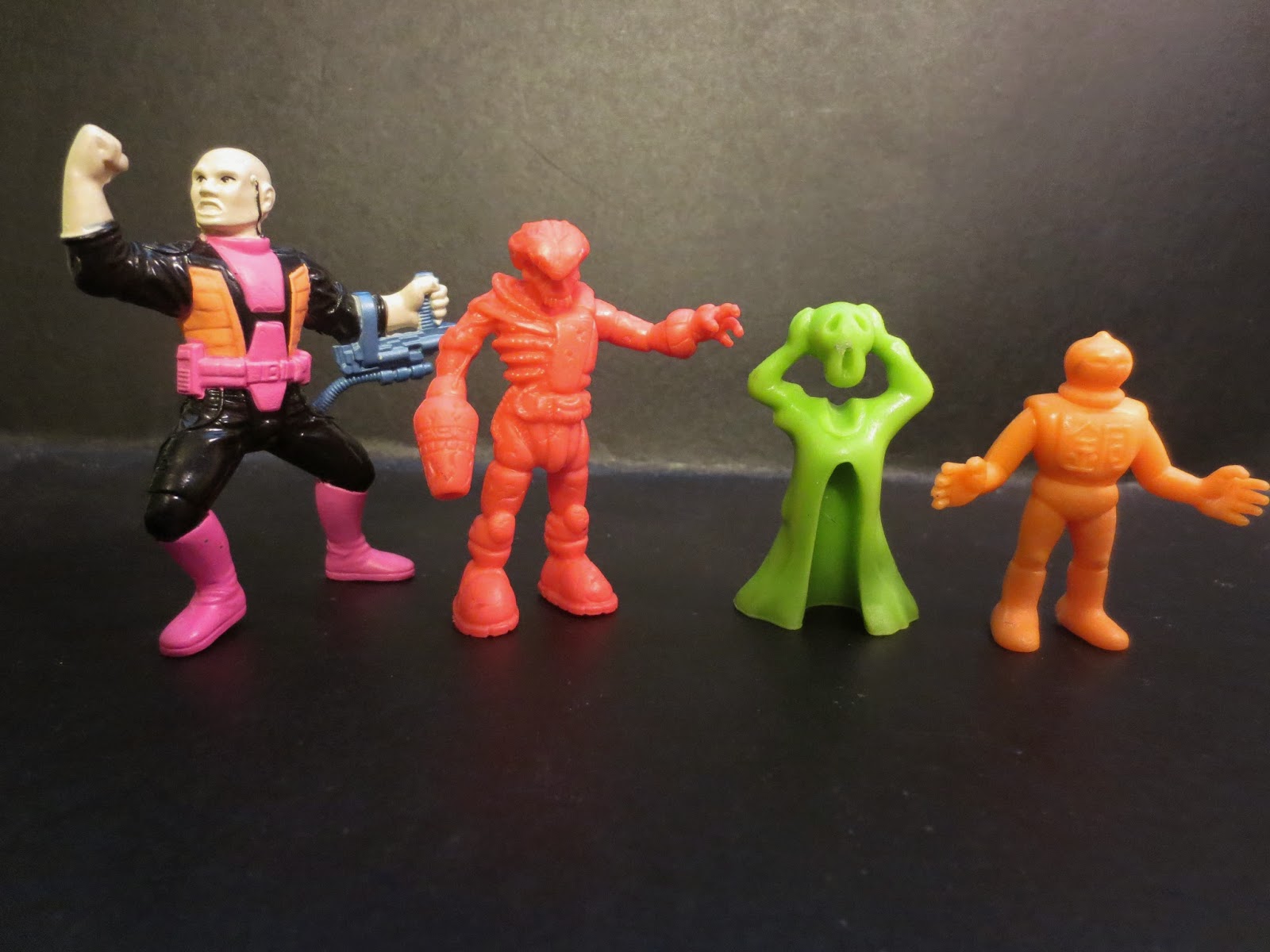 Here's an image of the standard Pheyden from Onell Design's Glyos so you can see how Pheyden compares to this zombified version. The standard version of the character has an almost insect-like appearance, particularly due to his segmented armor, so the way Zombie Pheyden features some of those armored plates removed really helps to give the figure his deteriorating, zombie-like vibe. The left right side of his chest has some very cool visible alien musculature while the various armored panels on his legs, arms, and chest are covered with various scrapes and dings. Check out that head sculpt, too. The torn...flesh or whatever is on top of his head is exposed to reveal his...brain? Seriously, I'm not an expert on alien physiology and biology, but I'm liking what I see.Especially his teeth, sunken eyes, and nostril slits. 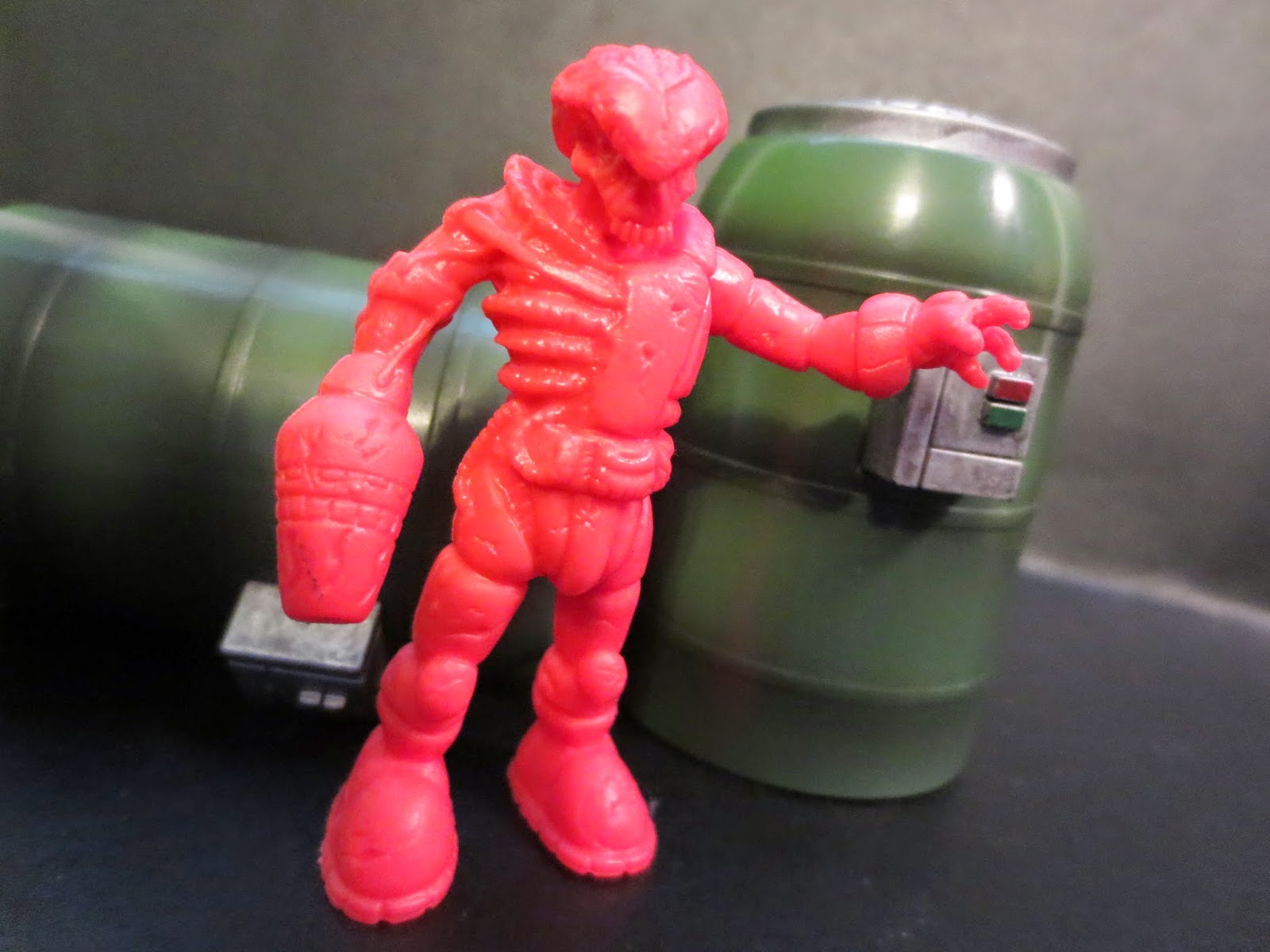 Zombie Pheyden has a cool pose. It's basic enough that he's not going to be hard to stand up, but his outstretched left hand is cool and a nod to the traditional zombie "grab." He's also got an unusal weapon on his right hand that appears to be a weapon of some kind. Maybe a blaster arm or something? Maybe his color change affects his weapon and now he's using a heat ray.  Pheyden doesn't have any paintwork, and is simply cast in the Hot Pink color. I like it as it is a color that definitely brings out all of the excellent detail and reminds me very much of Monster in My Pocket for some reason. 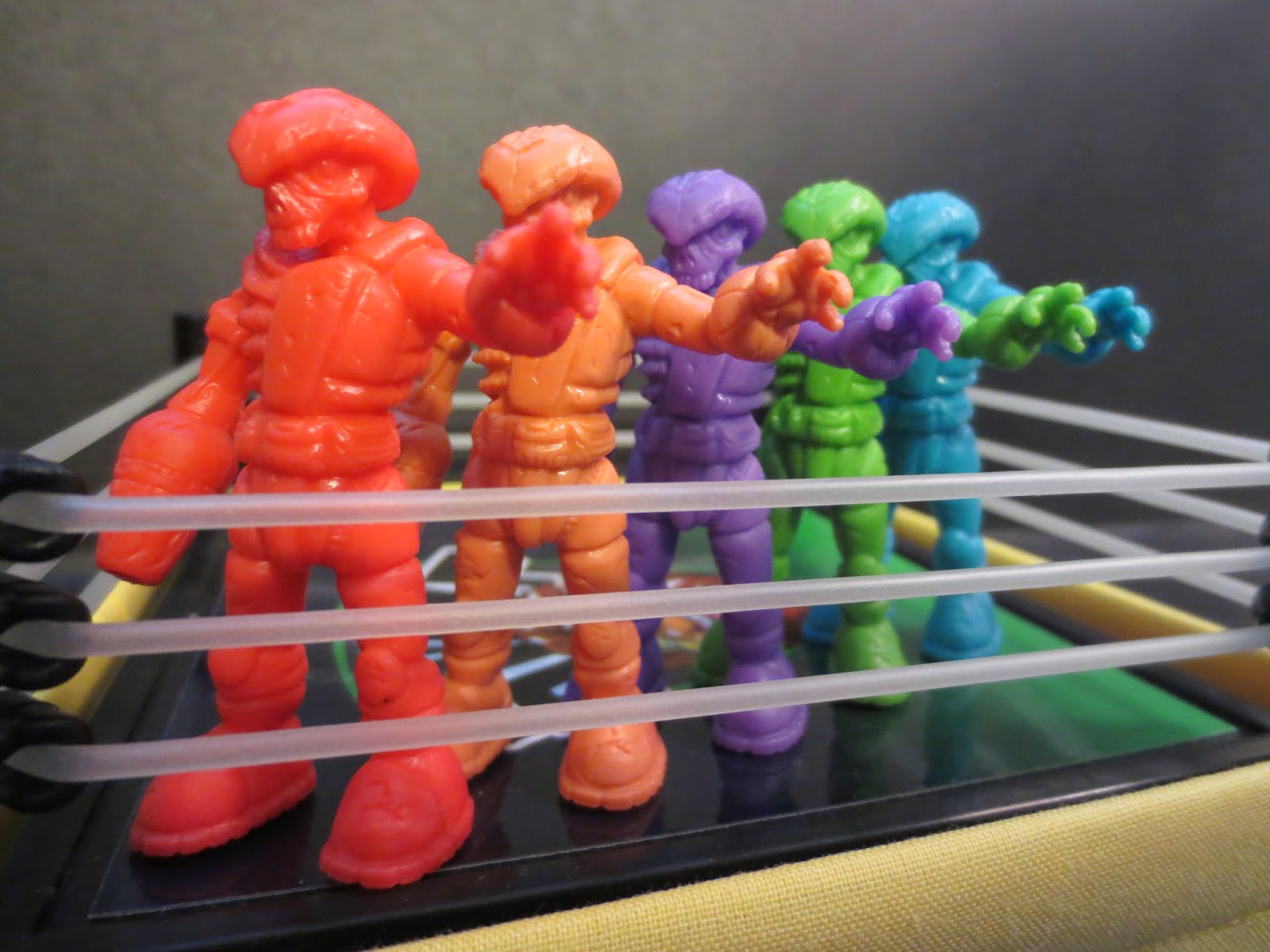 Unfortunately, Hot Pink AP Zombie Pheyden was one of the June minis available at the October Toys' shop but currently he is sold out. Keep checking back there, though, since sometimes certain figures pop back up during their monthly sales. They have really fast shipping and great service, too! 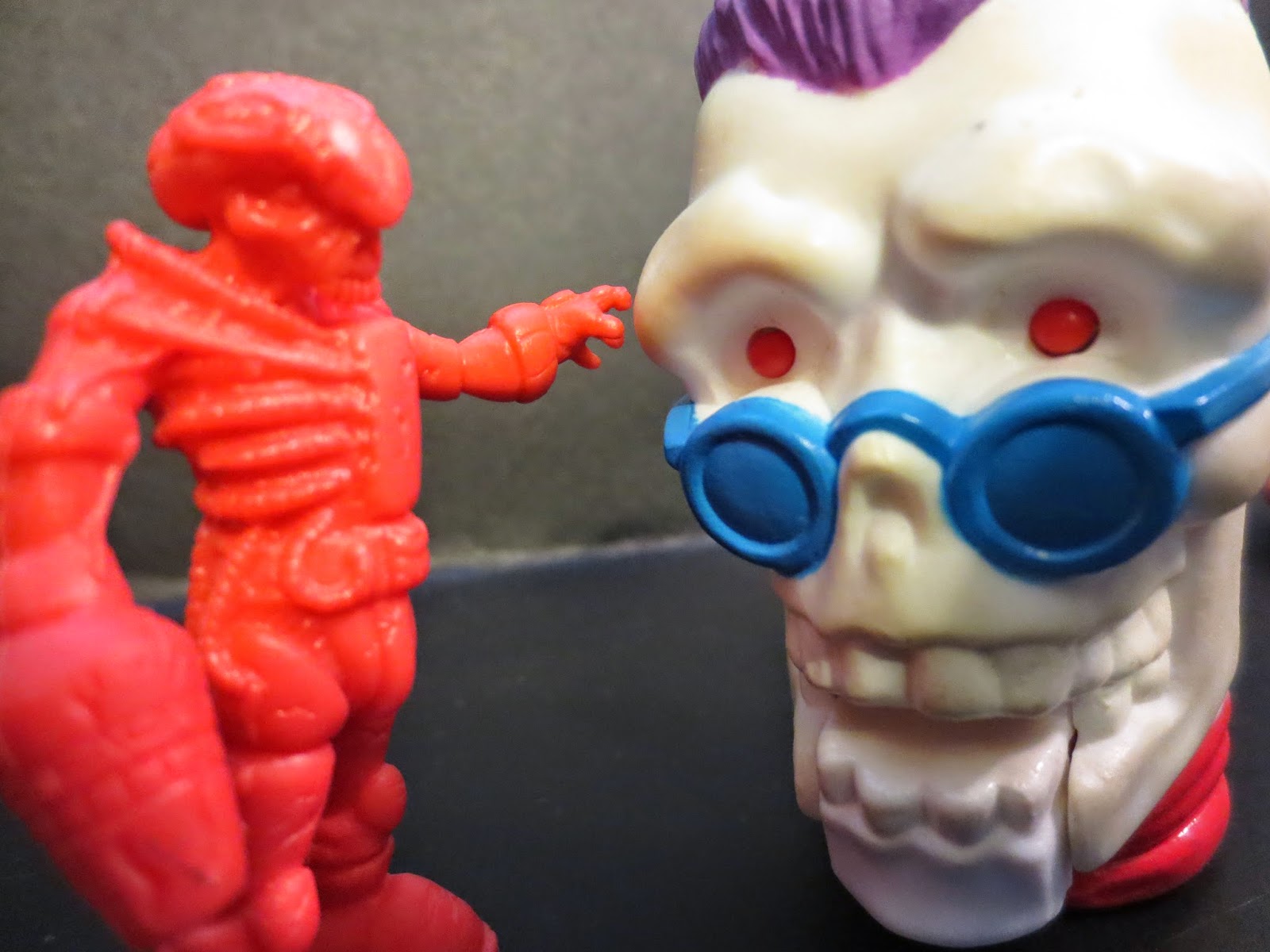 I'm always excited to get new minifigures and Lucky Green Zombie Pheyden is a great one. Even after owning four versions of this guy now, he's still a fun sculpt in a nice color available at a very low price ($2!). You can't beat that with a stick. October Toys always puts out quality product (they also have an excellent podcast as well) and I'm always excited to see what they'll do next. I'm giving Hot Pink AP Zombie Pheyden a Great, as he is another wonderful addition to my minifigure collection.
Posted by Barbecue17 at 12/03/2014