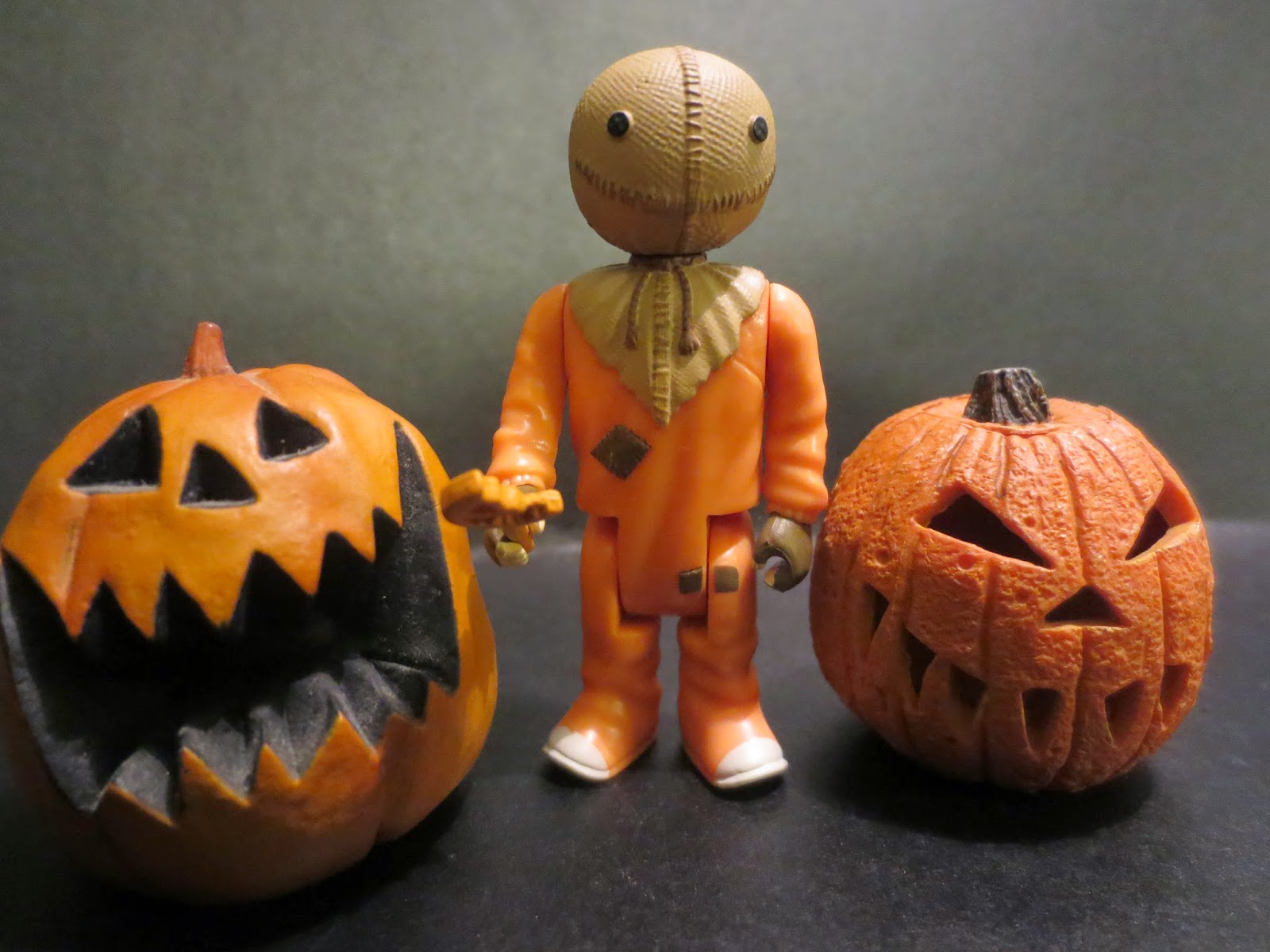 While horror films are a dime a dozen, films truly focusing on Halloween quite a bit more rare. While Halloween is the gold standard, the film that almost rivals it in perfectly encapsulating the experience of Halloween is Trick 'r Treat. I followed the progress of this film throughout its many delays until it was finally released to audiences in October of 2009. It is quite simply a Halloween lover's dream! When first watching the movie with Confirmed Epic Podcast guest host Andrew, I explicitly remember him saying that the film felt like Goosebumps for adults (that was meant as a positive in case you might be a little too young or too old to fondly remember Goosebumps) and myself saying that the film felt immediately nostalgic, as if I was watching an old favorite seasonal film even though the movie was new and I had never seen it before. It's definitely one of those fun horror movies that I've seen many a non-horror fans enjoy because of the ties to Halloween. Of course, getting on the subject of today review, we need to talk about Sam. Played in the film by Quinn Lord, Sam is the living embodiment of Halloween (the name is short for Samhain). I'm really delighted to see Sam in the Reaction Horror Series because it means that he is achieving the same cult status as all of these other guys. Who knows? Maybe in a few more years we'll see kids dressed as Sam as prominently as people dressed like Michael Myers, Freddy Krueger, or Jason Voorhees. Ready for a look at everyone's new favorite Trick 'r Treater? Then join me after the break... 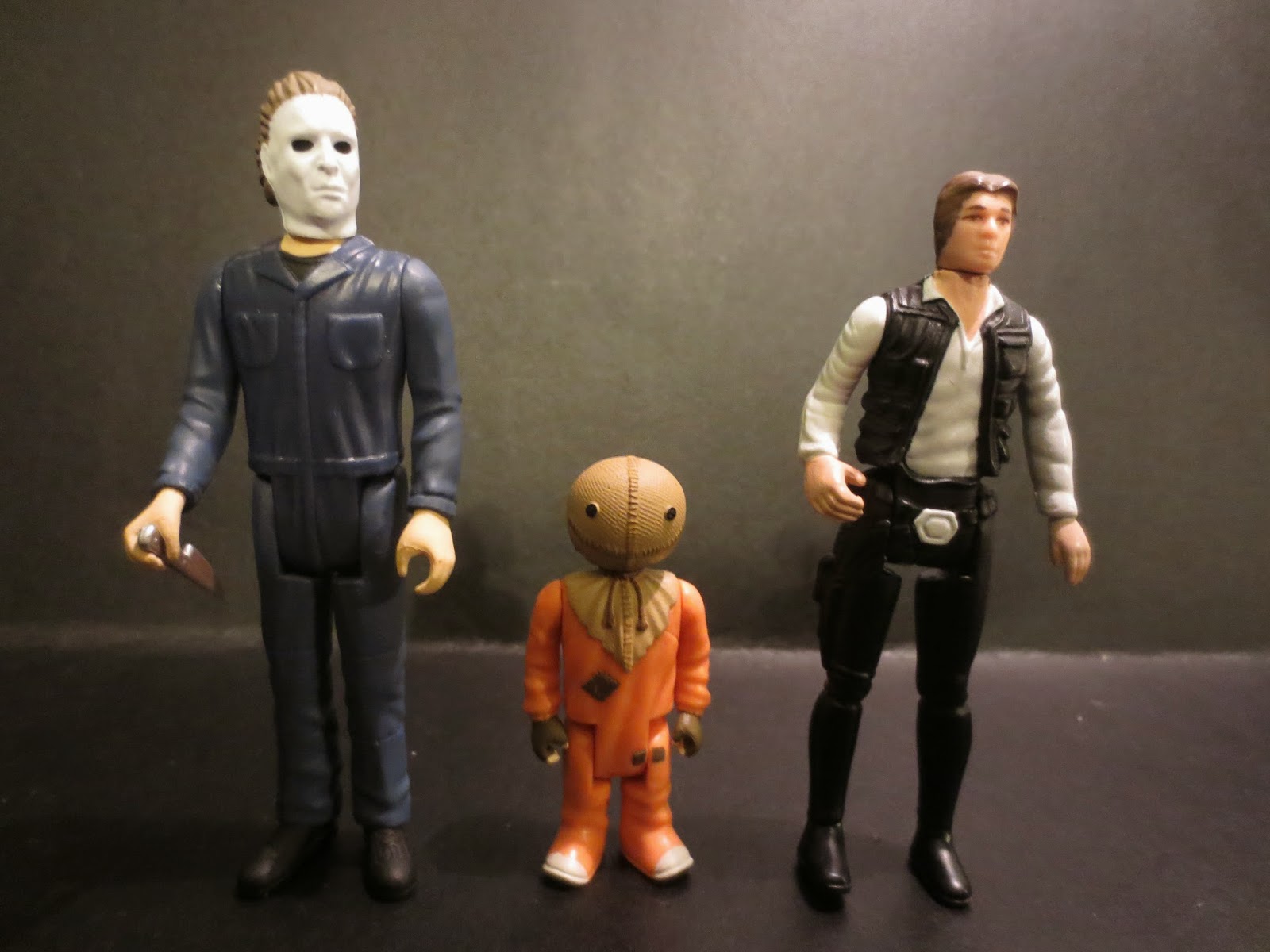 Matching his diminutive size in the film, Sam's Reaction figure is quite small, standing at only 2 1/4 inches tall. He has a great simple style that, like the best faux vintage figures, captures all of the details while still achieving a nice simplicity. He'll look great in any line that needs an additional trick or treater. Or he could hang out with the Jawas. It's your call, really. 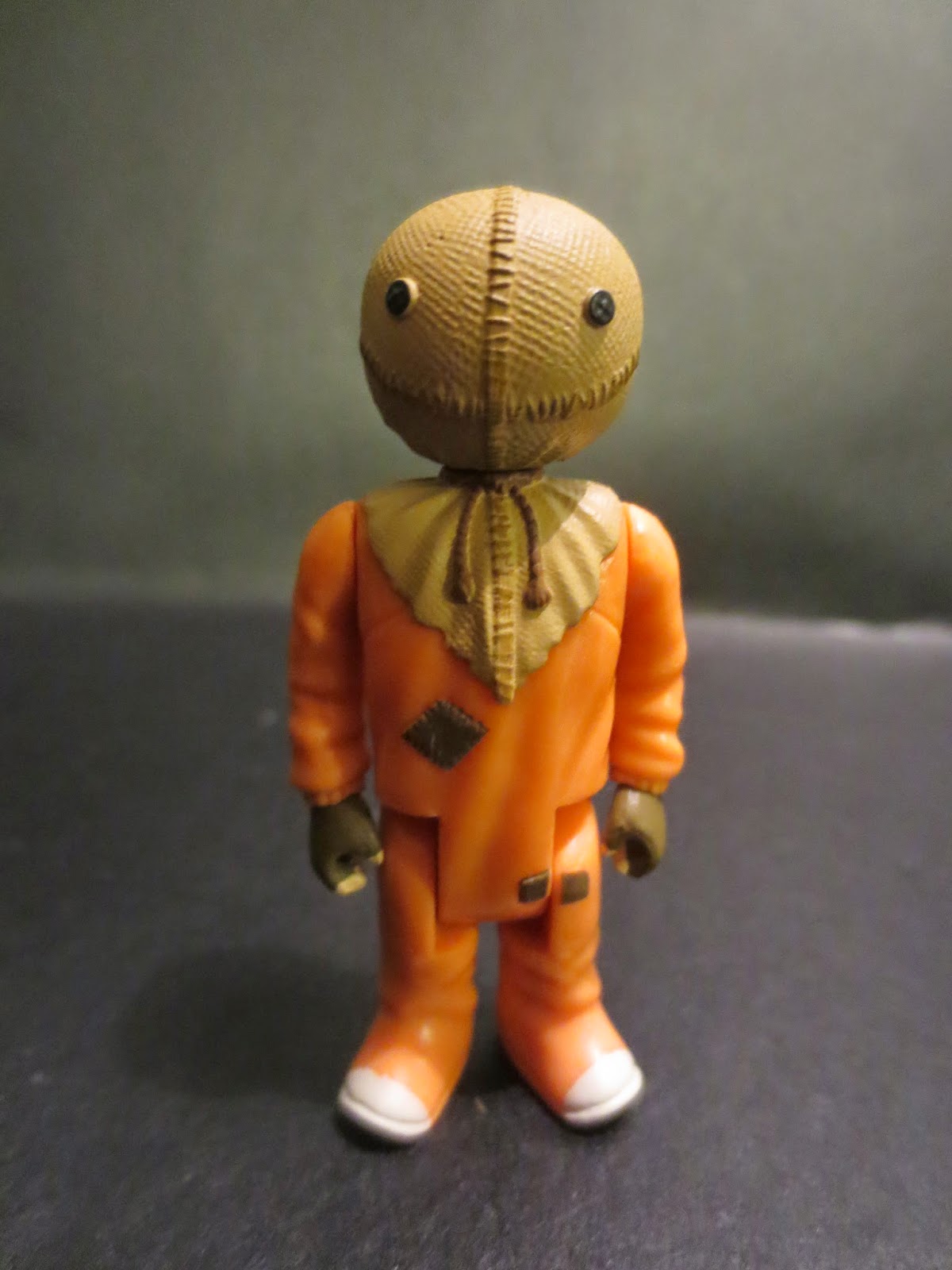 Sam comes with the same five points of articulation as every other Reaction figure: Swivel hips, swivel shoulders, and a swivel neck. He seems really well put together and stands just fine on his own. Oddly enough, Funko has stated that the holes in the feet were mistakenly left out of a few of these first few Reaction lines, so neither Sam nor any of his posse have foot holes. 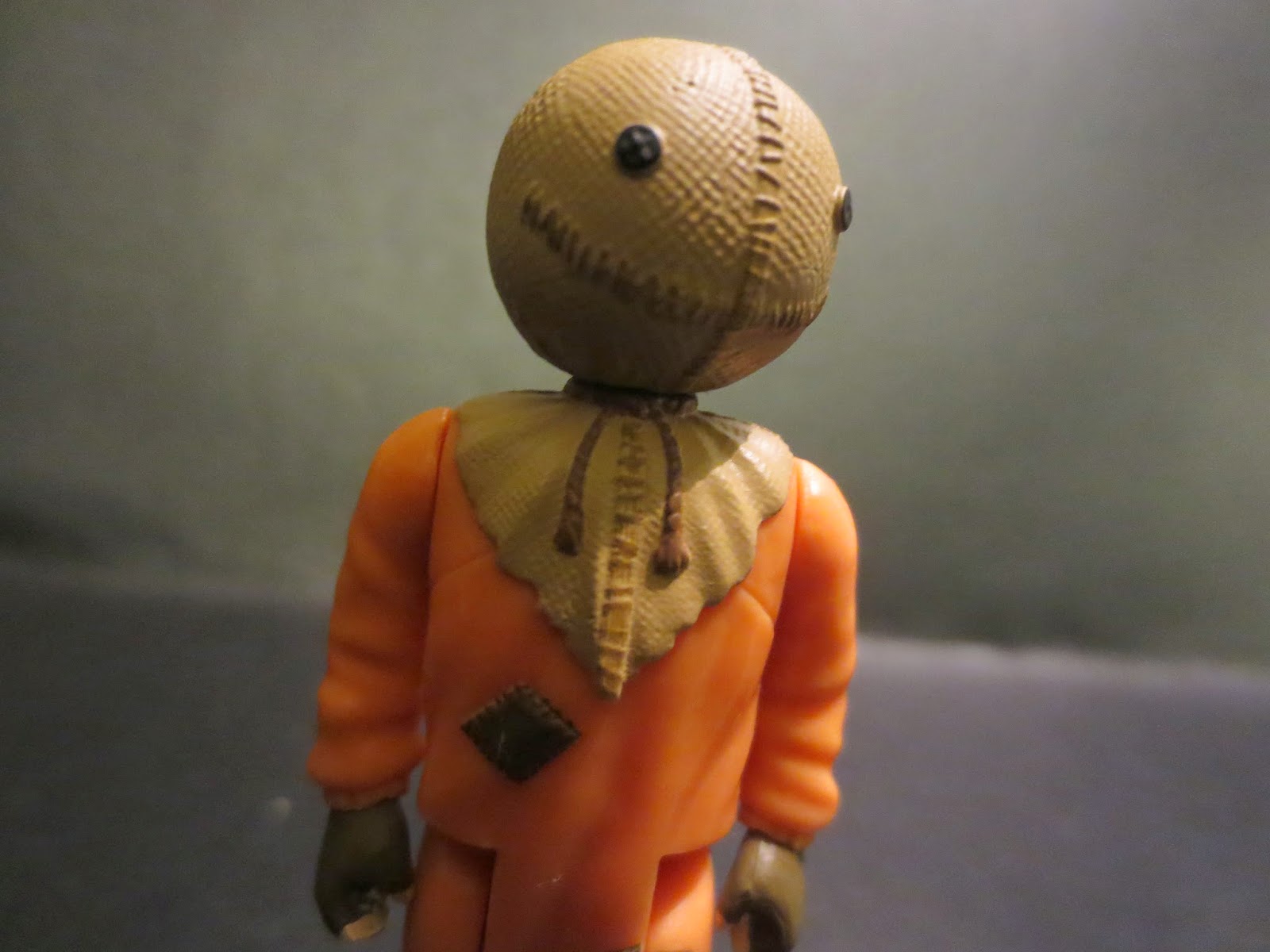 This is a nice sculpt for Sam that captures the Reaction style while giving us every detail we need. I really like the nice detailing on his burlap mask and around the patches on his costume. There ae also some nice wrinkles and folds that add to the childlike nature of the character. While making Sam's hooded form was absolutely the right way to go (it's my personal favorite), I do hope that at some point Funko will release a variant showing his pumpkin demon face. 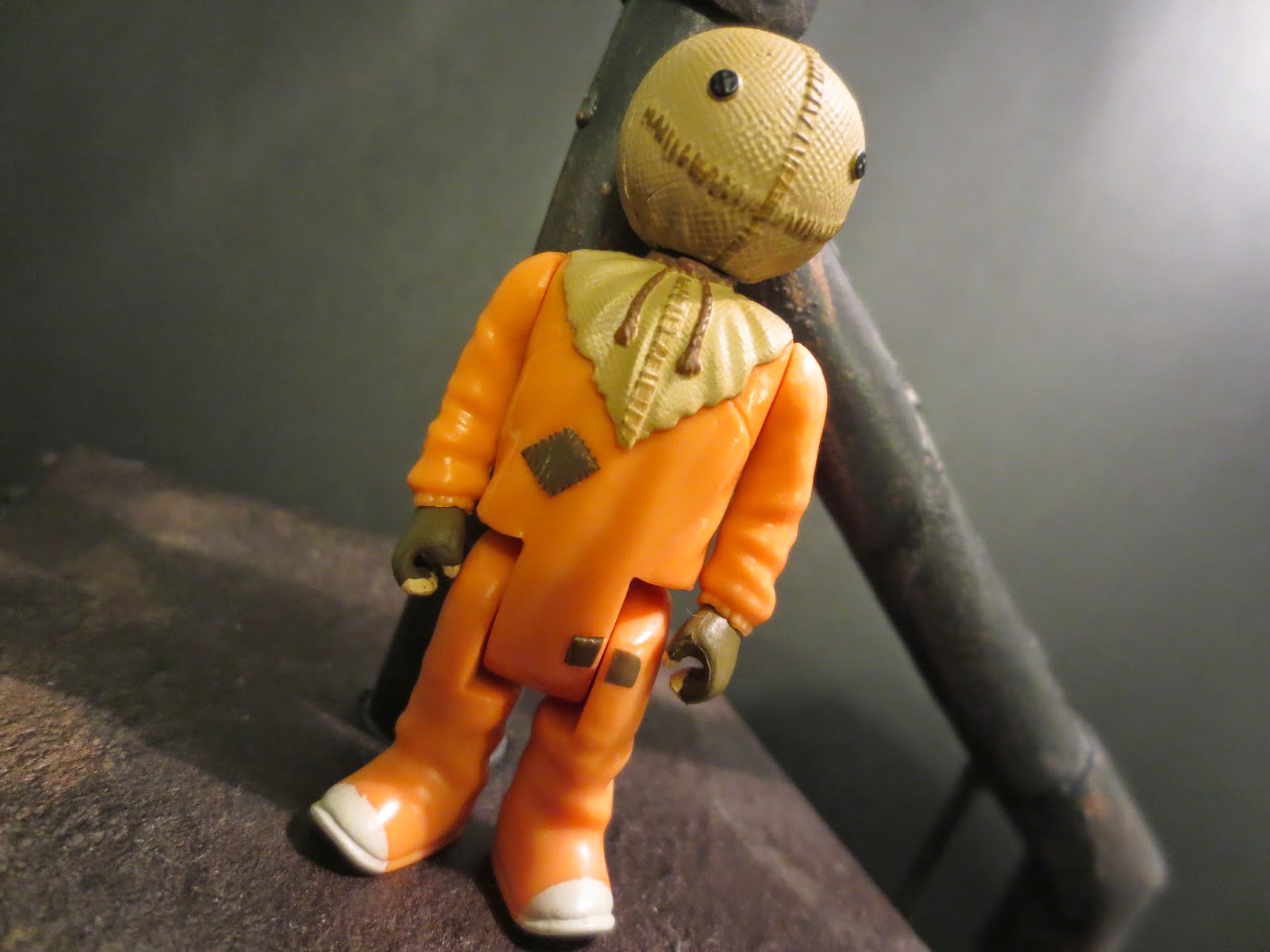 The paintwork is really clean with even small details like the seams on his burlap mask and his button eyes look fantastic. The buttons on the flap on the back of his costume are even painted, too! While most of the figure is simply molded in orange plastic, what's present here is really good. The Reaction Horror Series is definitely the best line for Funko's Reaction stuff currently in terms of paint quality (although the Nightmare Before Christmas and Universal Monsters line are pretty solid, too). 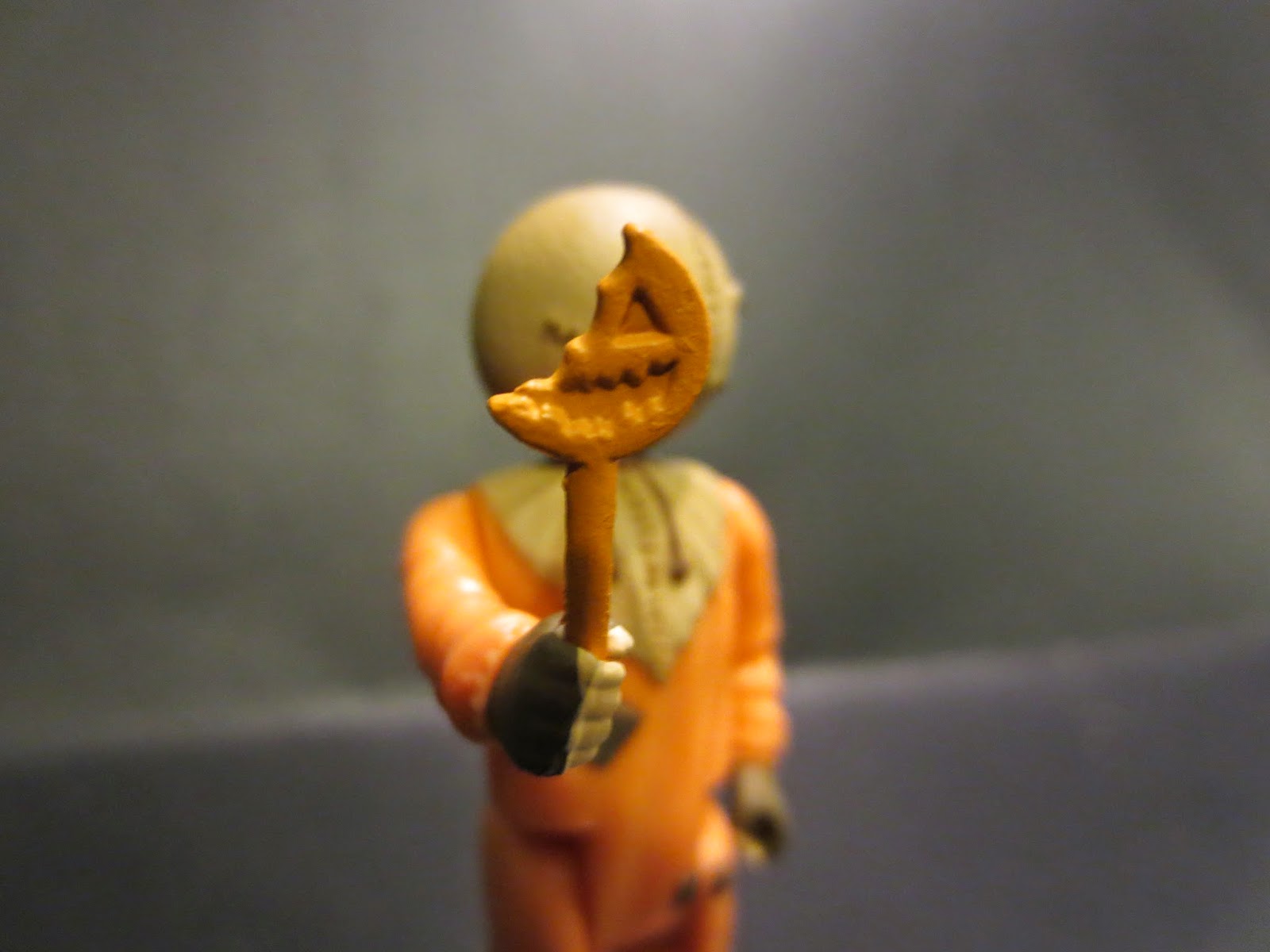 I guess my only disappointment with this figure is that he only comes with one accessory. It's his jagged, pumpkin shaped lollipop. It's a tiny little accessory molded in orange plastic with a sculpted jack o' lantern face on the sucker part. It looks good and fits in Sam's hands just fine, but I'm really wishing he'd come with his Halloween treat bag as well. It isn't as iconic of a piece as Sam's lollipop, but I have a hard time seeing the character without it. Seeing as Sam is so tiny, it seems like it would have been a good addition to add some more value to the figure. 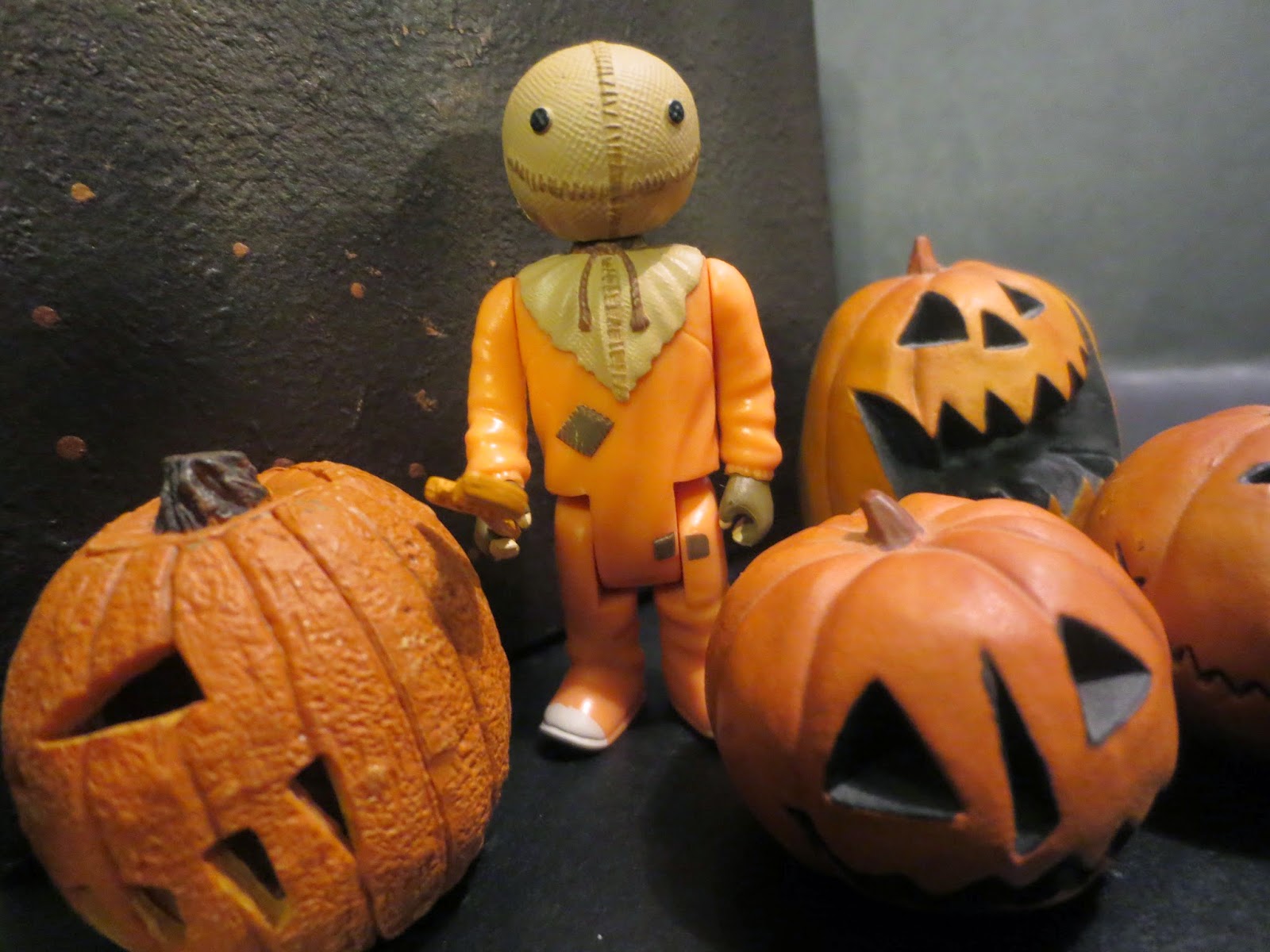 Being a huge fan of both Sam and Trick 'r Treat, it's hard for me to not be super excited by this figure: Great sculpt, paintwork, and a cool milestone for a fairly new horror icon. Still, I'm a little upset that a figure this small didn't come with anything else. I definitely think his trick or treat bag sack would have been a cool extra. Heck, even a pumpkin. Just a few years ago when NECA released their Sam action figure in Cult Classics, he came with two pumpkins (one on fire), the treat bag, a base, an alternate demon head, and a chocolate bar with an Exacto knife blade in it, in addition to the lollipop. I know Funko has a completely different goal and aesthetic approach than NECA, but it still makes me think that Sam could have came with another goodie. Still, I like him. He's awesome loose or displayed on his card (I don't say that about many toys), so I have no hesitation with giving him a Good and a 1/2. He's a great new horror icon and it's great seeing him alongside some other giants in the field.
Posted by Barbecue17 at 12/03/2014