Action Figure Review: Sir Laser-Lot from Masters of the Universe Classics by Mattel 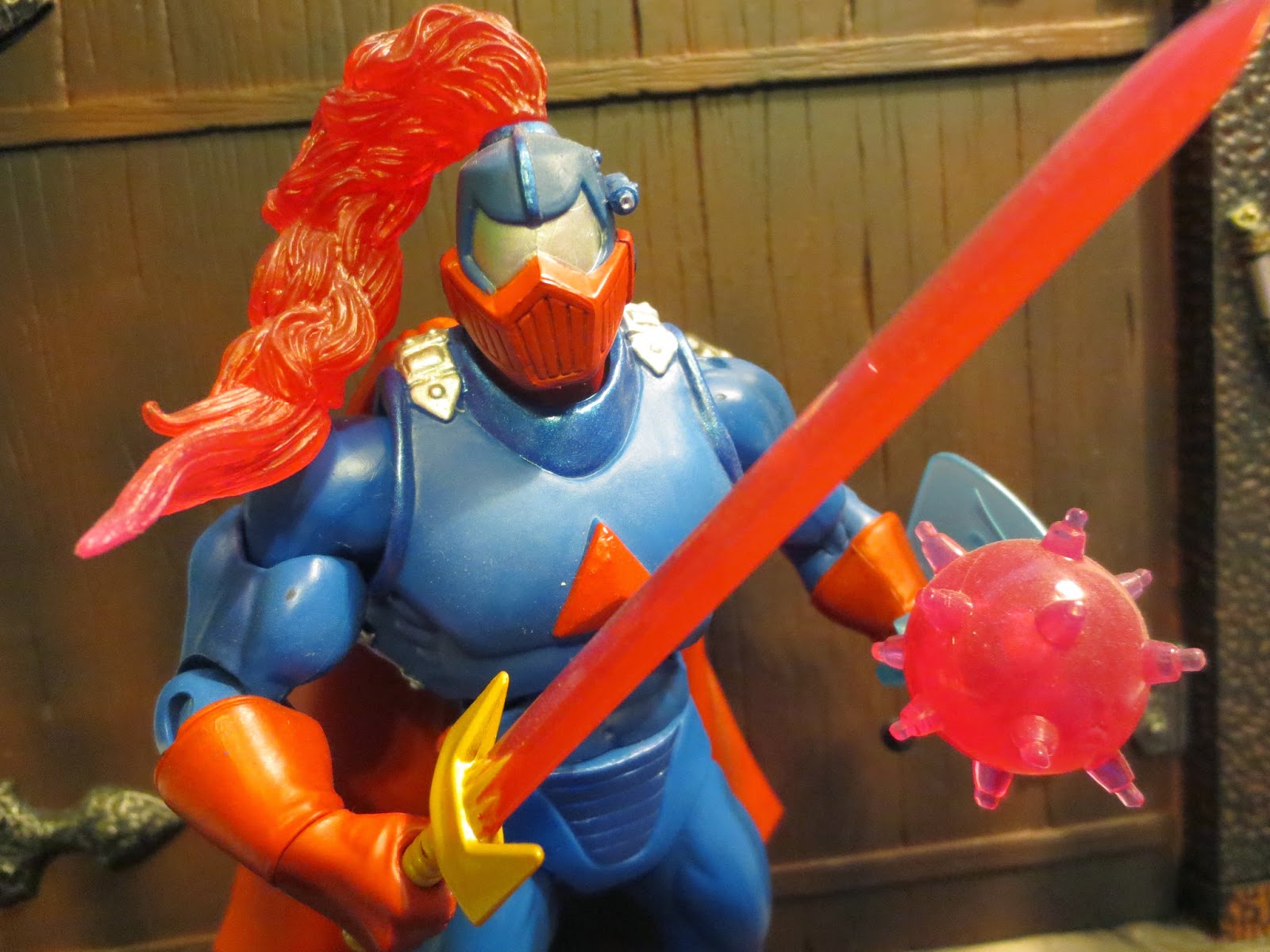 This is an older figure from 2012, but I'm reviewing it for a purpose that hopefully will become clear within the next week or two! For the 30th Anniversary of Masters of the Universe, Mattel created a 6 figure sub-line for the MOTUC line to introduce some new characters into the line. 1 figure was based on a create-a-character contest from the 80s (Fearless Photog), one figure was based on the winning entry in a new create-a-character contest (Castle Grayskullman), and 4 figures were based on concepts by various Mattel designers, employees, and friends of the company. Sir Laser-lot was created by writer and DC Comics chief creative officer Geoff Johns based upon a childhood drawing. A new character to MOTU lore, Sir Laser-lot has so far only appeared in a downloadable mini comic on Comixology written by Johns himself. Here's a brief look at what has become one of the more forgettable figures in the MOTUC line... 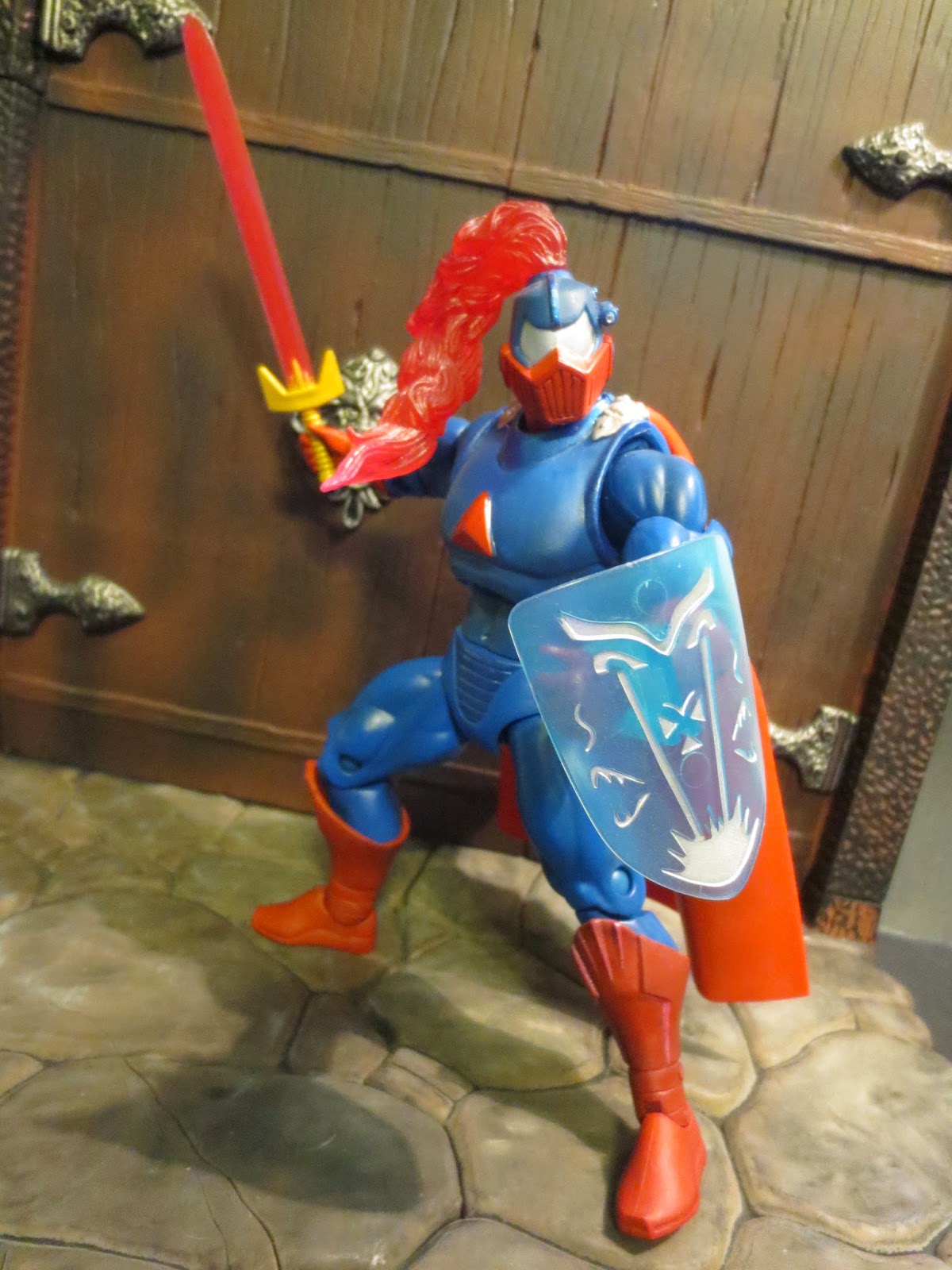 The Facts:
Height: 7 5/8th inches from the bottom of his feet to the top of his plume. 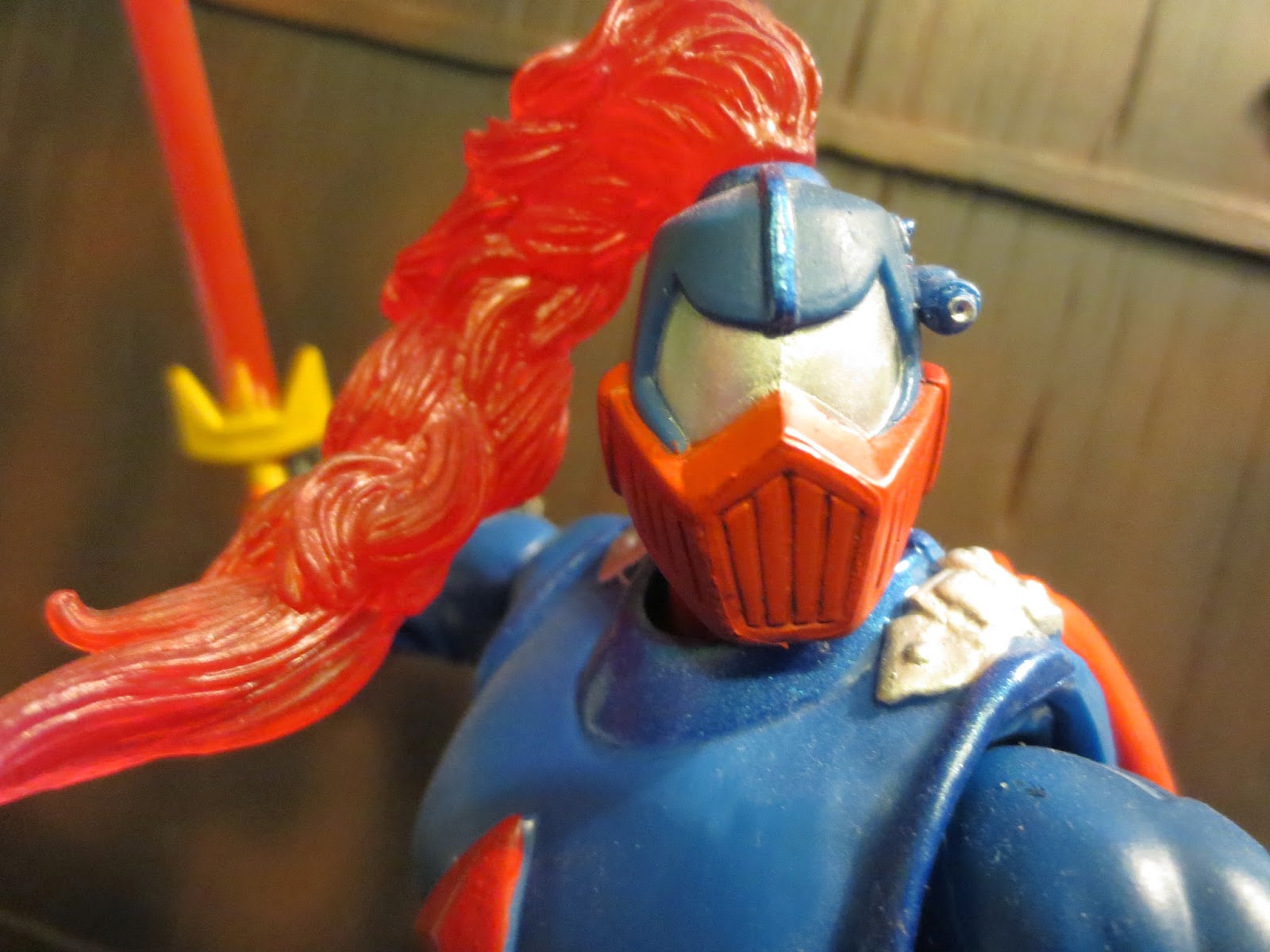 * I haven't noticed any quality control issues with this figure: He's got great articulation, solid construction, and no gummy weapons.The technical execution of the figure is quite well done and missed a lot of the MOTUC problems from that particular point in the line's life.

* Sir Laser-lot is quite well armed. His laser mace and sword are a nice, translucent red. They feel very sturdy and look excellent with the character. The shield has a bit of give to it, but it's nice. It has quite a neat design on the front with some silver decor. 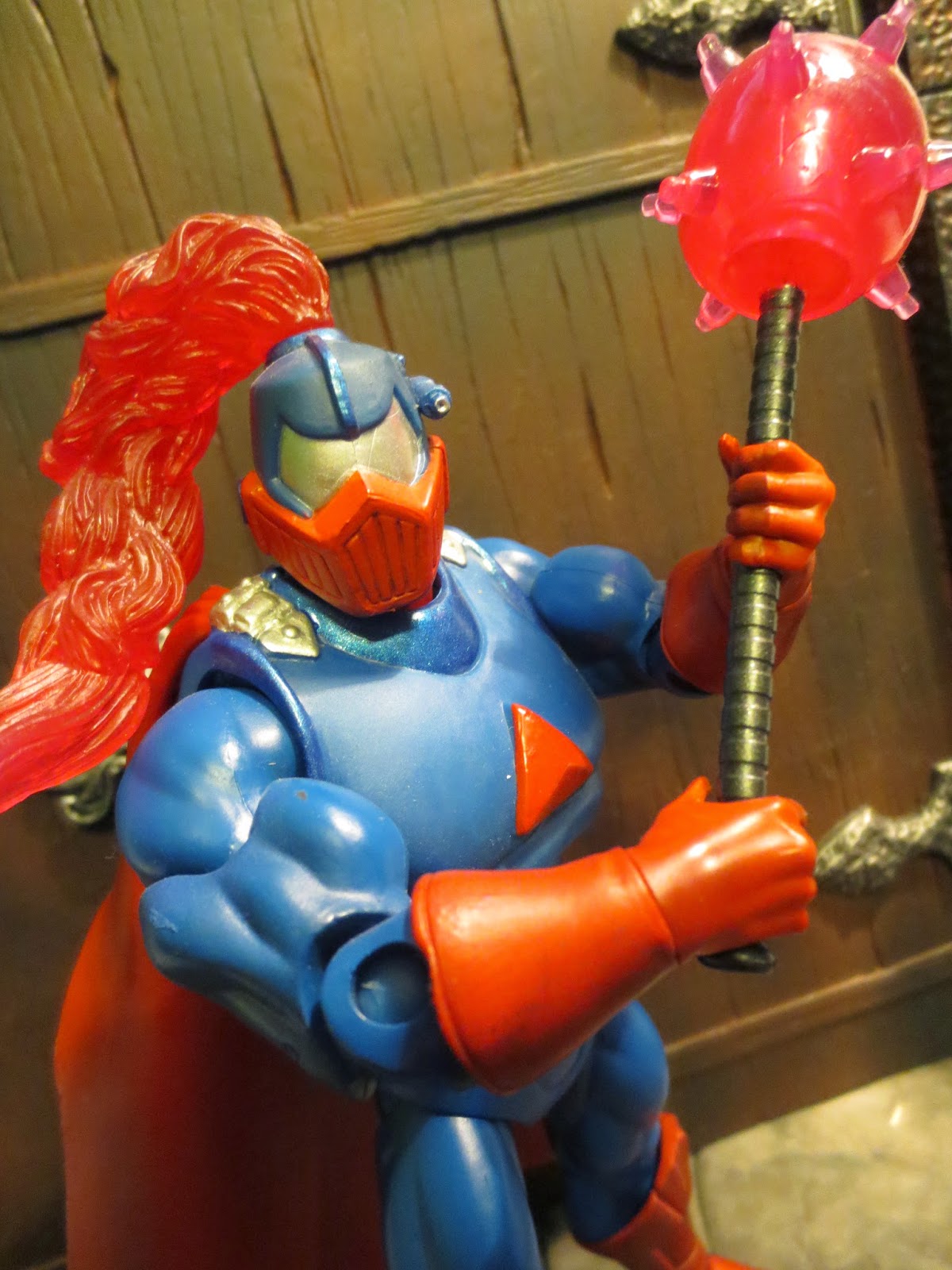 *The head sculpt is really good. It largely resembles a standard knight, but has an interesting grill and some type of scope or laser projector on the left side of the head. There's also a translucent plume coming out of the top of the head which seems to be removable if you loosen the small amount of glue holding it on (mine just came out on its own). If yours doesn't move, some folks have suggested a little hot water to loosen it up. It's nice to be able to pose the plume, but be careful when you do it!

*Sir Laser-lot is wearing blue armor with red highlights (boots, gloves, cape, and mouthpiece). Unfortunately, without any other predominant color and a solid blue waist, Sir Laser-Lot is really quite a bland figure. I love the idea of a technologically enhanced knight in MOTU who isn't Extendar, but the colors on this guy really do not benefit the character. I think a belt or more silver might have broken things up a bit more.

*This is an unusual complaint but, looking at the figure, the paint work appears to be off. I believe the problem is that many parts of Sir Laser-Lot are molded in the infamous black plastic Mattel used mid to late 2012 and then were painted over. This is quite different from how most of the MOTUC figures have been produced and gives the figure a darker, slightly mess look. 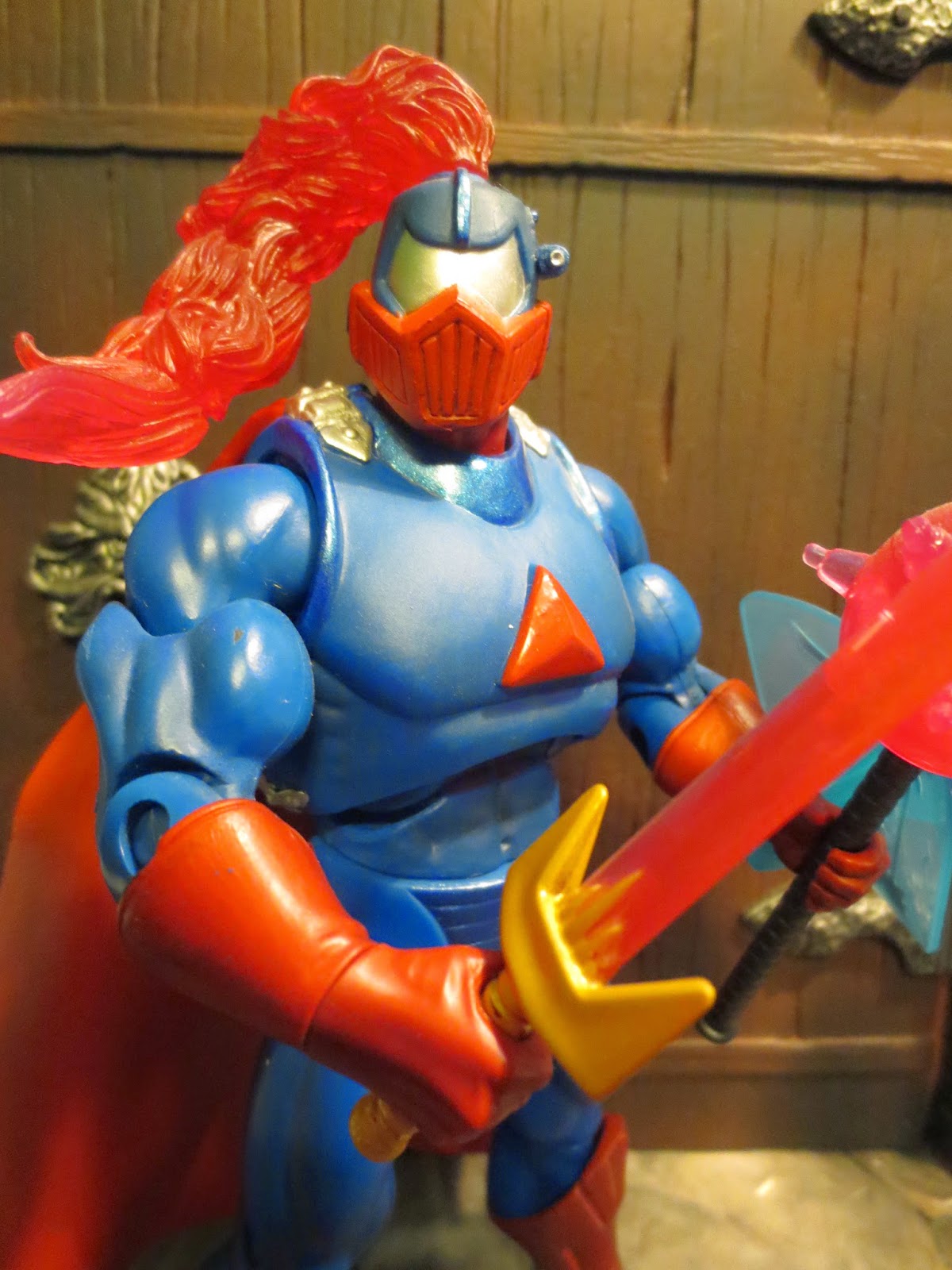 There's nothing really wrong with Sir Laser-Lot, as he is a very solid figure, but his design (mostly the color scheme and paint work) leave a lot to be desired. I really want to like him, but he feels a bit too generic for my tastes. I kind of wish he'd come with an alternate head that revealed his identity like in the minicomic; it might have given him a bit more personality. If you like his appearance, than you'll be much happier. As it is, however, Sir Laser-Lot is quite possibly my least favorite figure in the 30th Anniversary MOTUC line. Looking back, I'd put them in this order from my favorite to least favorite: Castle Grayskullman, Draego-Man, Fearless Photog, Mighty Spector, Cy-Chop, and then Sir Laser Lot.
Posted by Barbecue17 at 12/11/2014