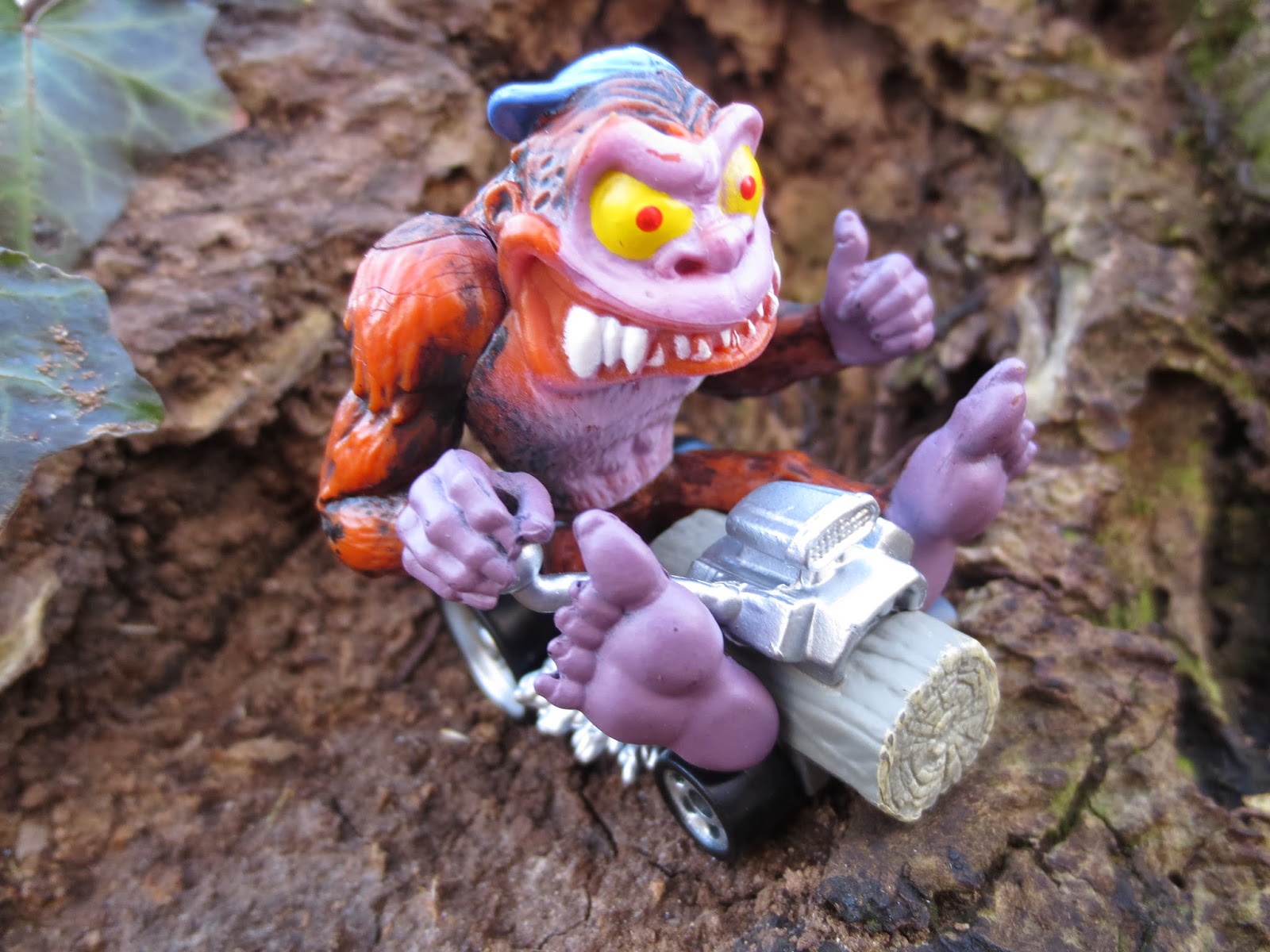 Back in October my father and I were walking through Toys R Us and stumbled across an entire end cap of Monster 500 product by Creata toys. I was impressed with the vast array of monsters, cryptids, and other cool creatures that the line had on display and my dad remarked that they reminded him of Rat Fink and some of the other designs from Ed "Big Daddy" Roth. Monster 500 is a series of toy cars that feature some diecast metal parts and crazy monstrous riders from a variety of horror subgenres. Today I'm looking at the second figure in the series, Lead Foot. Based off of the legendary cryptid Big Foot and part of the "Lunatic Legends" subset, Lead Foot is ready to "'Squatch the Competition." Today's review of Lead Foot comes to you courtesy of John Gaither of The Clawful Punch! John was kind enough to send me a toy I'd been hunting for for years (more on that later) and packed in some other cool stuff like Lead Foot here, too! Thanks again, John! So, let's get into the review of Lead Foot..... 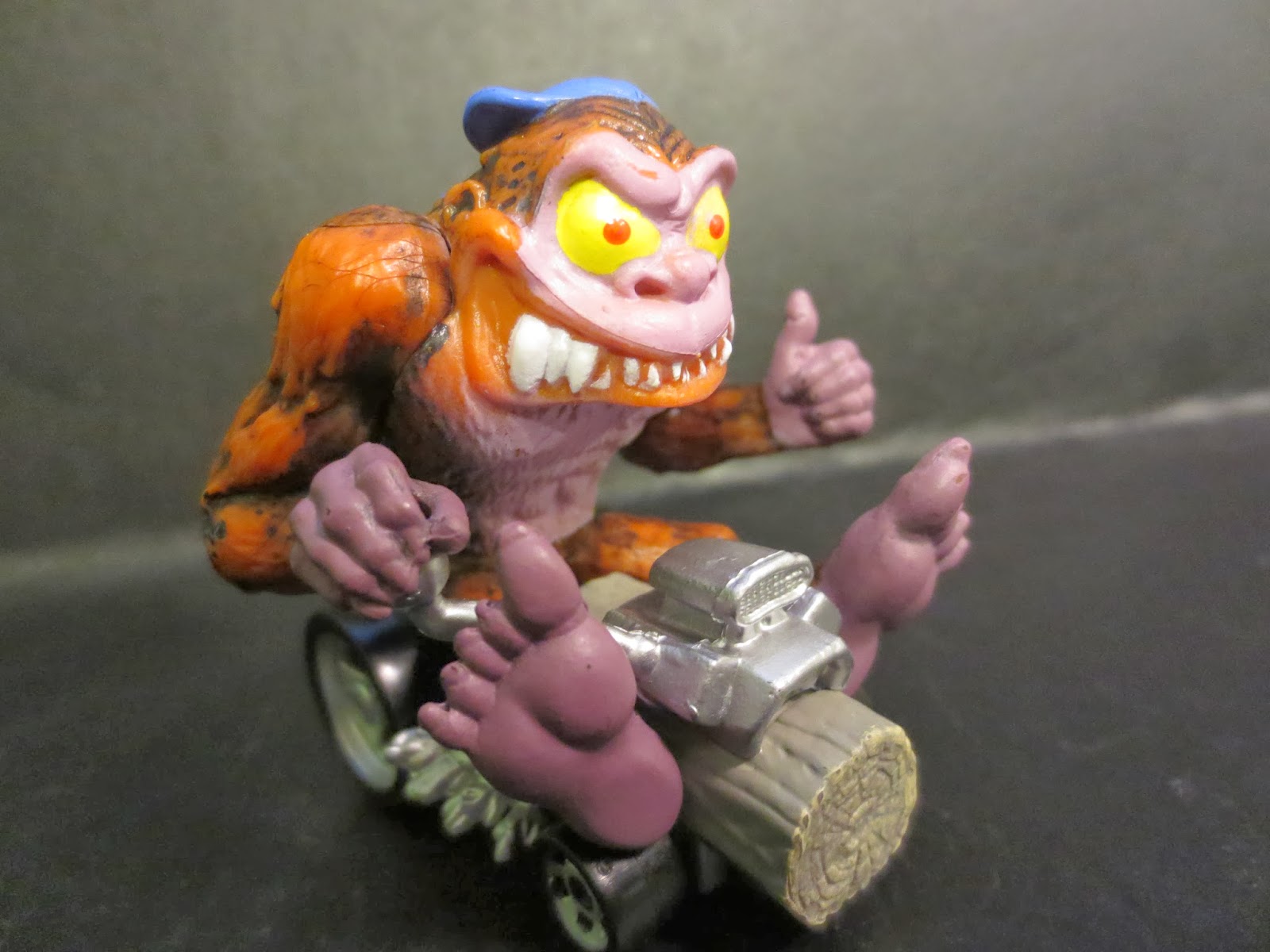 Monster 500 seems to be shorter in length than your average diecast toy car, but they're taller due to the riders. Lead Foot is about 2 inches long, 1 3/4 inches wide, and a little over 2 inches tall. The chassis of Lead Foot's vehicle is diecast metal while the rest of the toy is made from a sturdy plastic. These guys look to be sold both individually and in multipacks. Each figure comes with a trading card (which I'll mention more later). Lead Foot has a very exaggerated style to him; he's way too small for the vehicle he's riding and has oversized eyes and teeth. He's just the right mixture of humor and horror! Lead Foot isn't articulated himself, but the wheels do roll (as you no doubt expected). 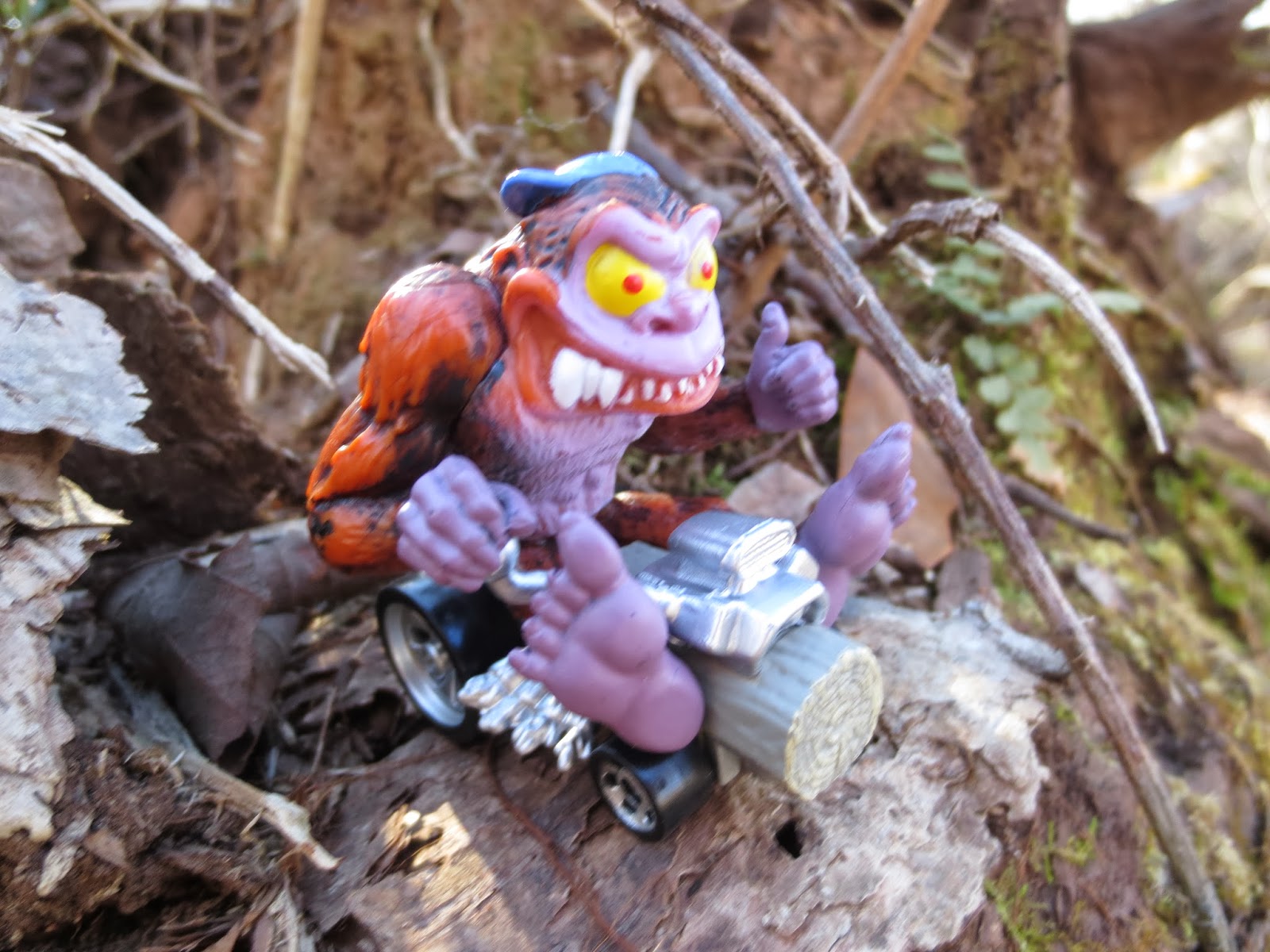 The sculpt is really fun and definitely the selling point of this guy. Lead Foot looks like your average Big Foot with larger teeth and crazy, bulging eyes. He's also wearing a sideways baseball cap and is giving us a thumbs up. He can't be all that bad, can he? There's a nice mixture of different fur types sculpted all over his body (shorter hair on his chest and long, shaggy fur on his arms and back) which really stands out. Rather than a standard vehicle, Lead Foot is riding a log, or as his trading card calls is a "Syper-charged Road Hog Log." Besides having a nice wood grain pattern and tree rings on the cut ends, there's also a large engine jutting out of the top, a steering handle, and exhaust tubes on the sides. 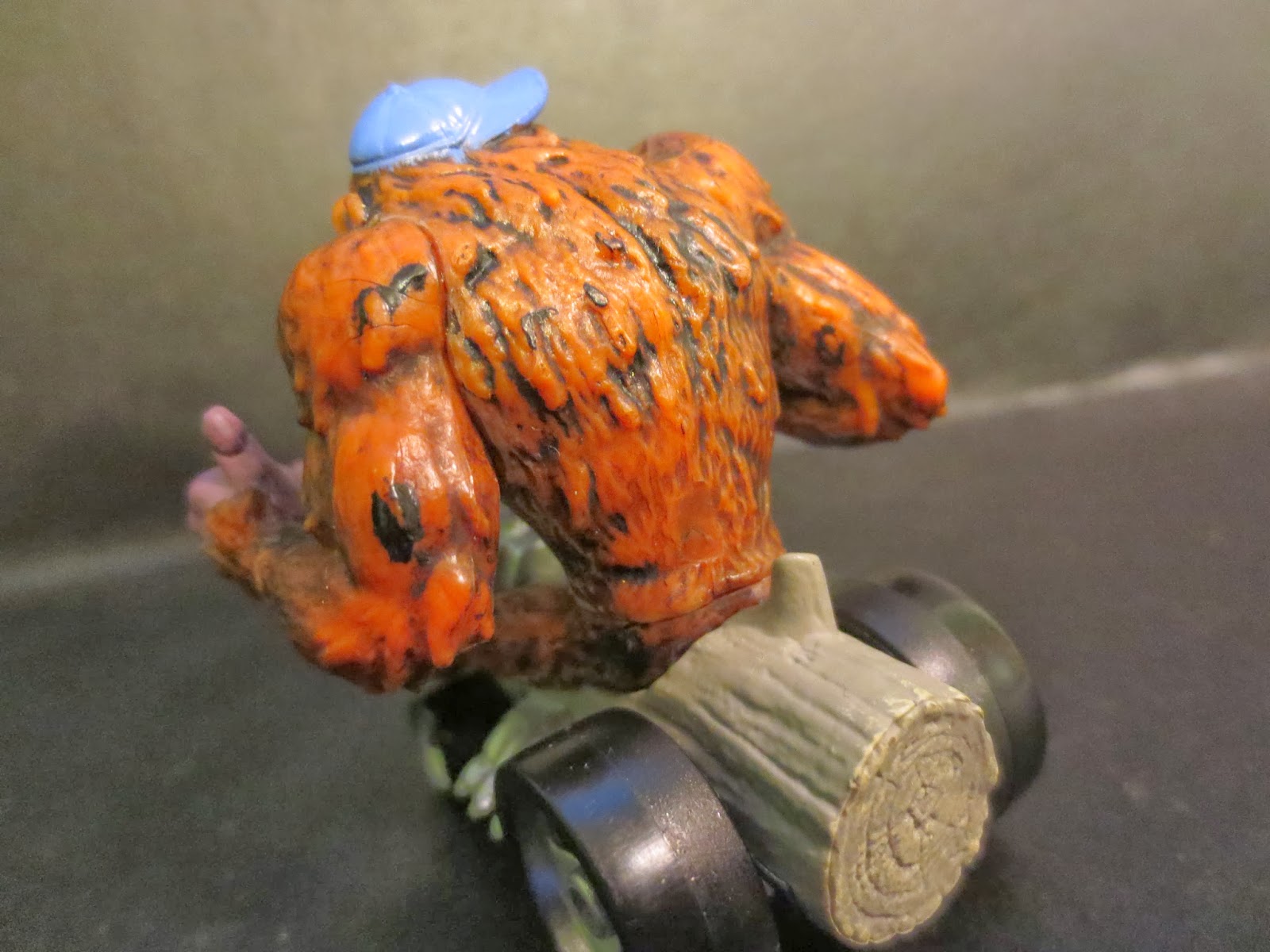 The paint work is good, too, and really enhances the sculpt. There is a little bit of bleed and slop here and there (around the eyes and on the hat) but aspects like the great drybrushing on the log and the heavy wash on Lead Foot's fur look great. The paint is much better than you'd expect on a toy like this. 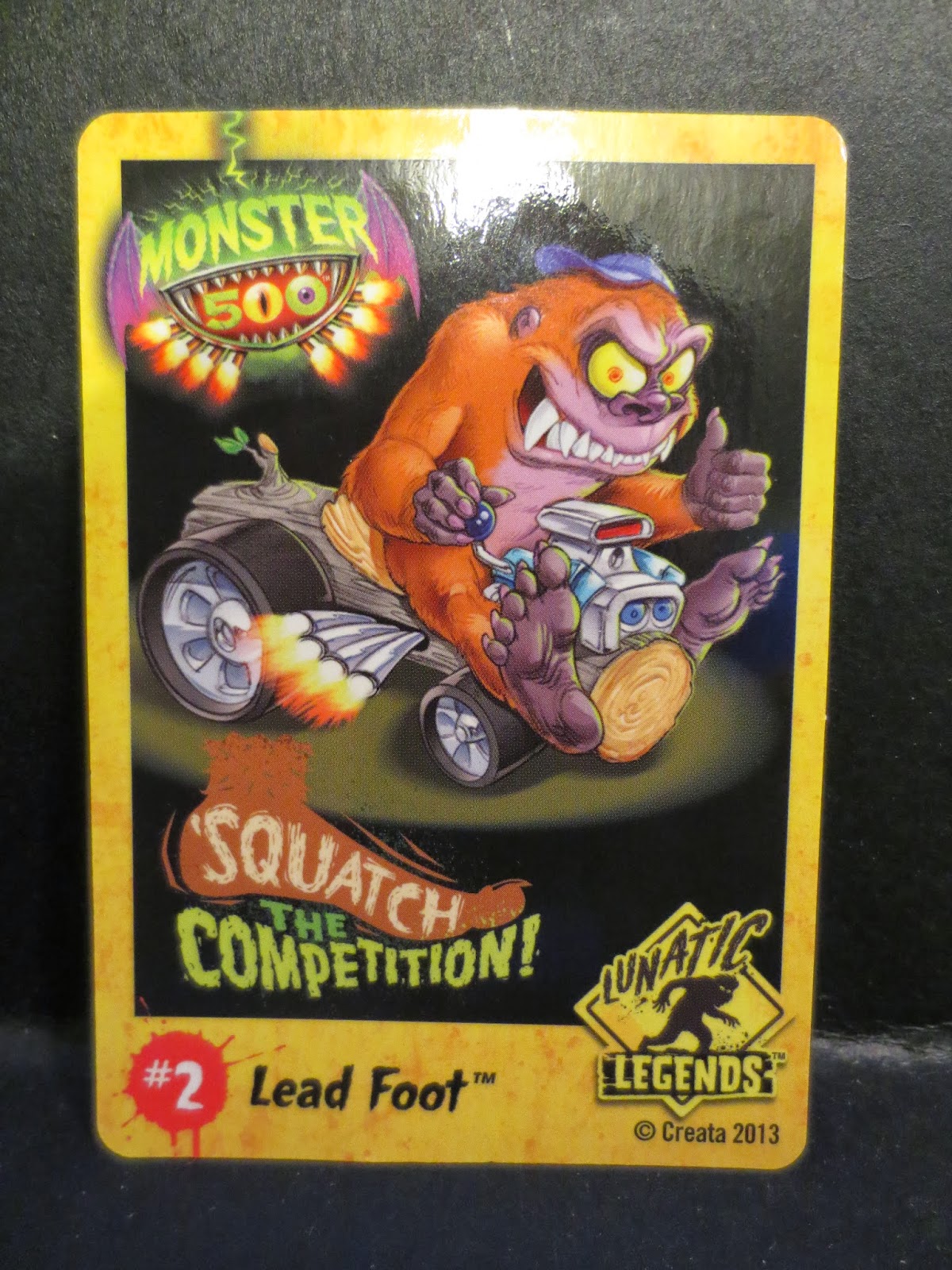 While Lead Foot doesn't come with any actual accessories, he does come with a trading card. On the front is a cool image of the character with the "Monster 500" logo, the "Lunatic Legends" subset logo, and the character's name and motto. On the back are some fun stats and a bio about the character as well as acode which can be used to download this character into a free Monster 500 Racing App. I haven't played it yet, but that is a rather cool feature for something like this. Companies need to find more ways to bridge the gap between toys and video games, just like Skylanders did. 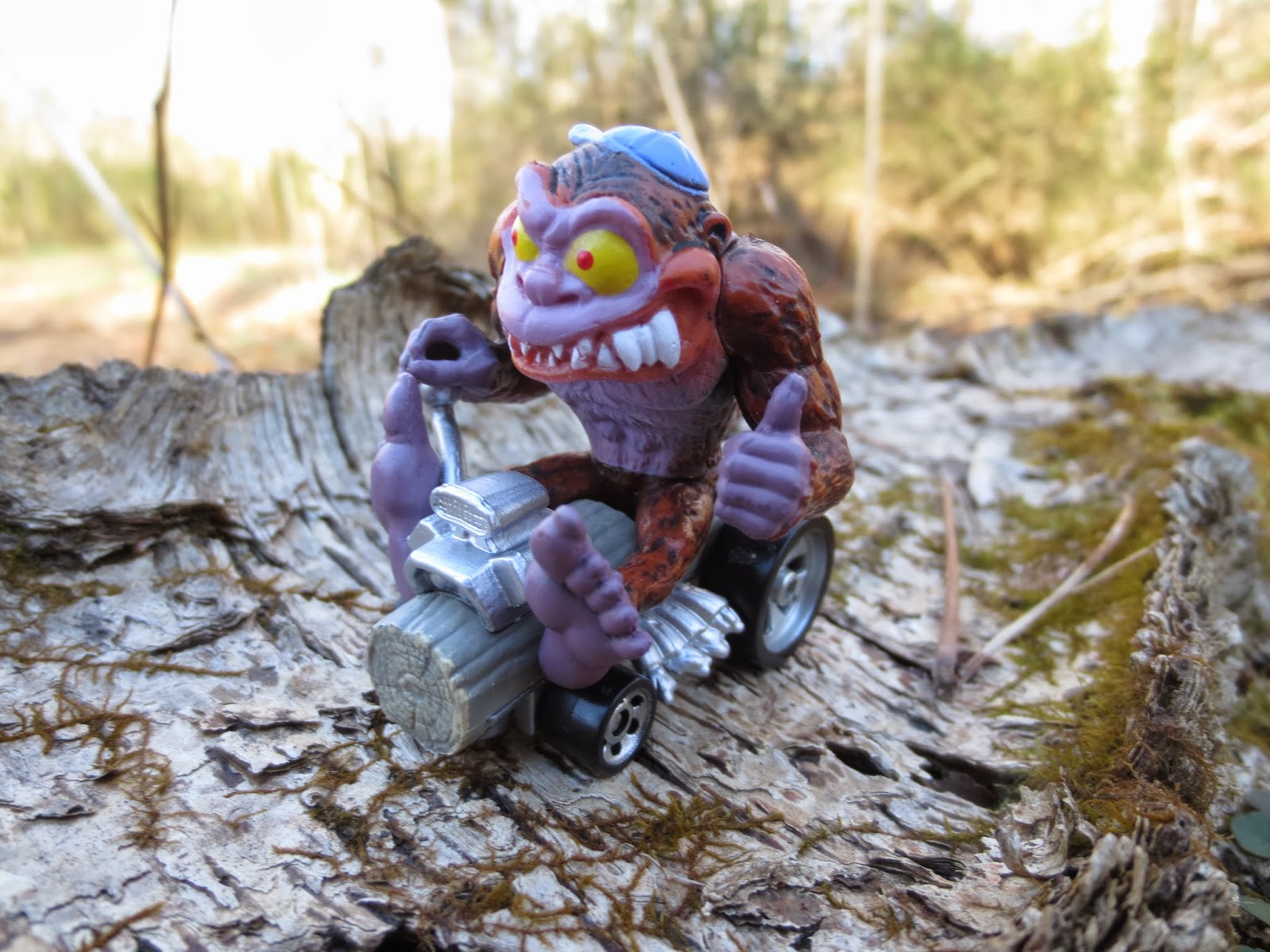 I like this little guy. I'm nuts about monsters and cryptids, so Lead Foot is right up my alley. I'm giving this guy a Good and a 1/2. While toy cars aren't everyones cup of tea (they're not really mine) the horror aspects of this line definitely win me over. I think these might be exclusive to Toys R Us, so the next time I'm out that way I'll be checking these guys out a bit more closely. They seem to be about 5-6 dollars each which seems a little high for a toy car, but I guess you're essentially paying for the app as well. I don't know if kids are gravitating towards these, but they've certainly caught the eyes of a few collectors.