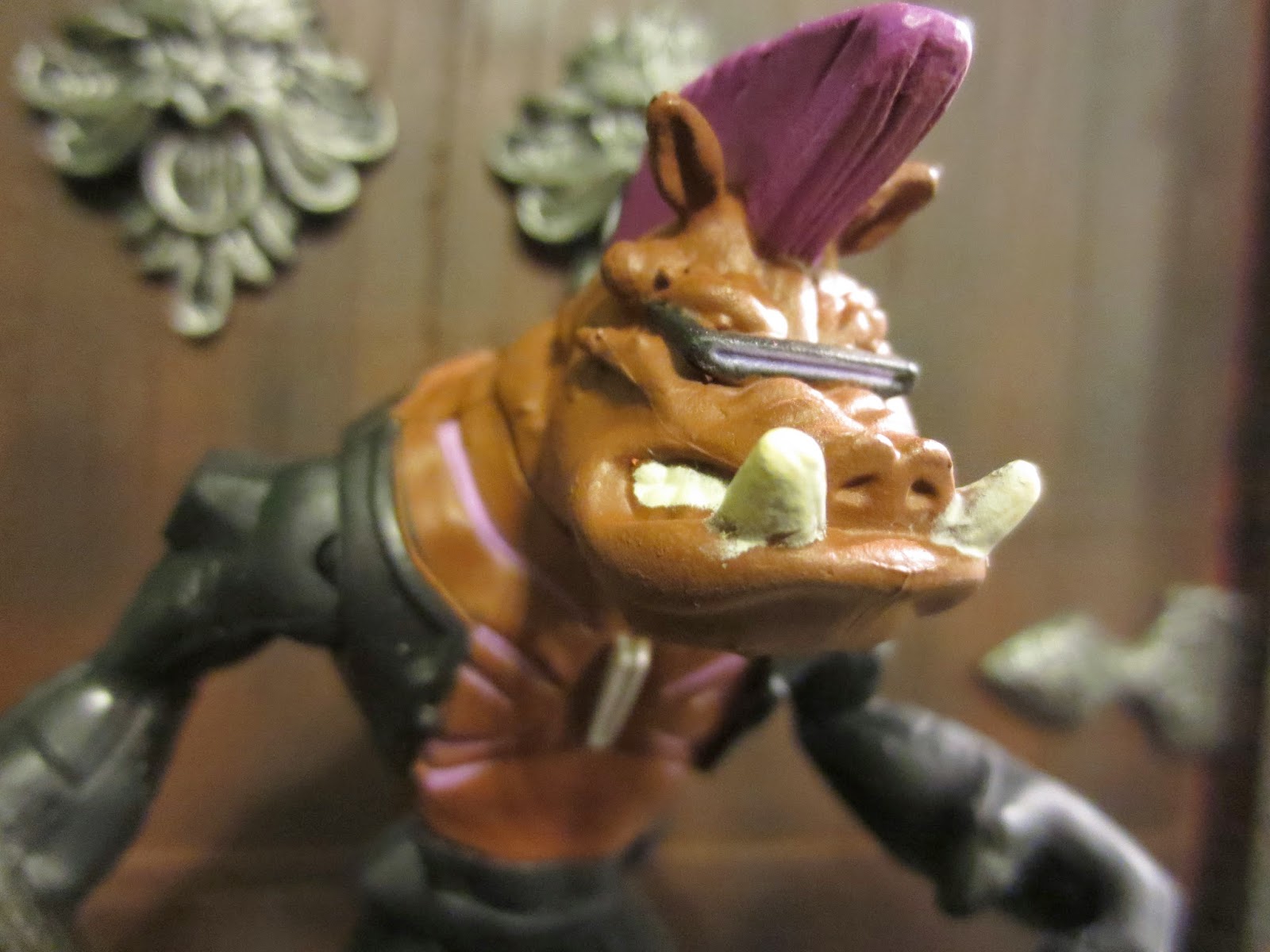 I think most TMNT fans are pretty excited that Bebop and Rocksteady have made their way into the Nickelodeon based TMNT toyline and will be appearing on the show this coming January. While they've appeared in the IDW comic and are slated to appear in the sequel to this year's Michael Bay produced live action Teenage Mutant Ninja Turtles film, it really feels like it has been awhile since we've seen these guys. Today I'm looking at Bebop who, along with Rocksteady, are currently Wal-Mart exclusives. My understanding is that these will be time limited exclusives and that they will appear in other stores once the characters mutate on the show. In the new cartoon the pre-mutated Bebop is a professional thief named Anton Zeck who has a history with Ivan Steranko, the Russian arms dealer who will later mutate into Rocksteady. While I'm watching the show as it is released on DVD and am not fully caught up yet, I have to say that it seems like a neat idea to make these guys more serious and specialized criminals who are a cut above your average street criminals. Ready for a look at everyone's favorite half human/ half warthog warrior? Then join me after the break... 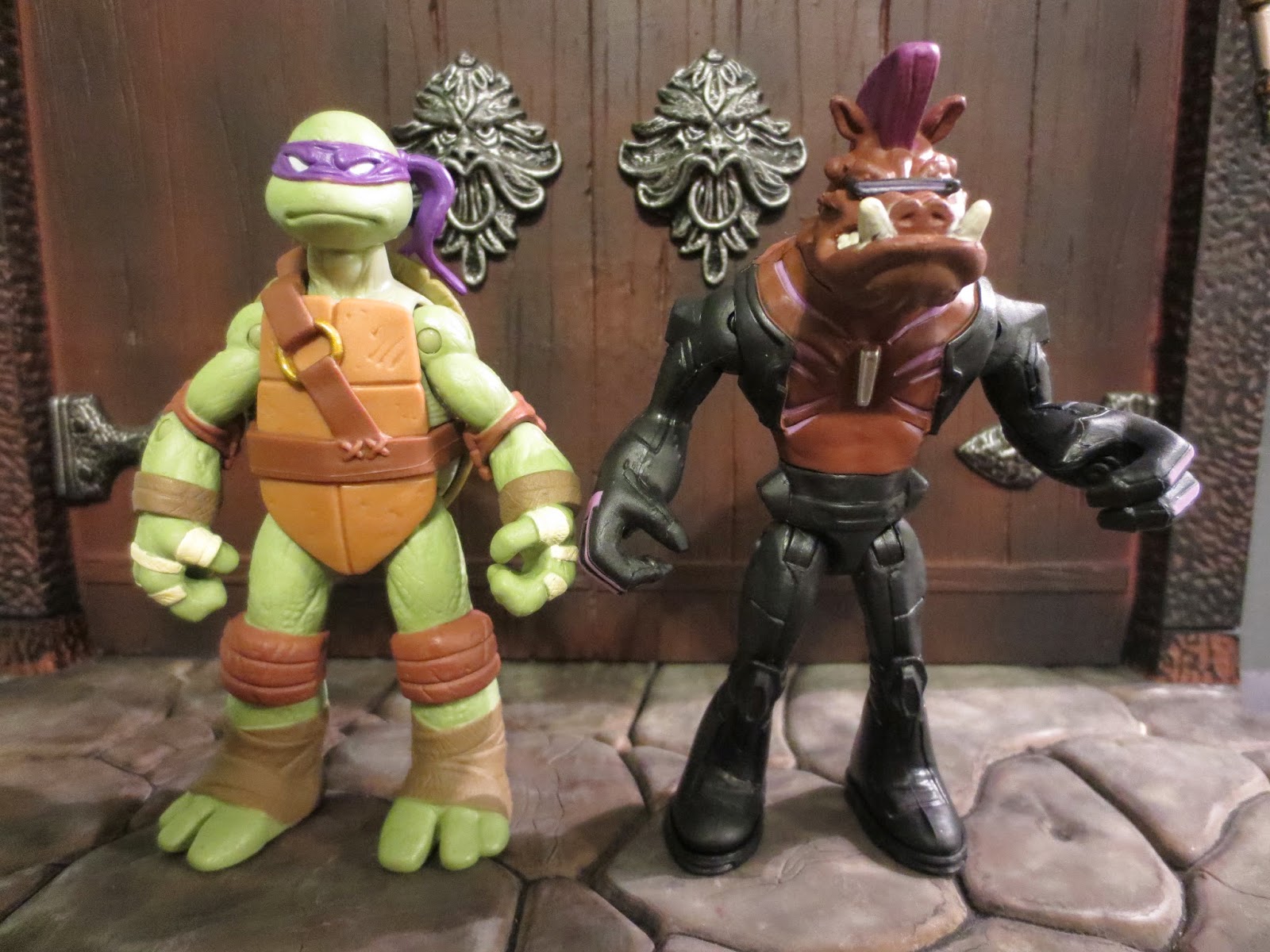 The Facts:
Height: Bebop stands around 4 3/4 inches tall from the bottom of his boots to the top of his mohawk.

Articulation: Hinged knees, swivel/ hinge hips, swivel waist, swivel/hinge shoulders, a swivel neck, and three rolling wheels (one on the back and two on the ankles).

Accessories: A mine and a grenade. 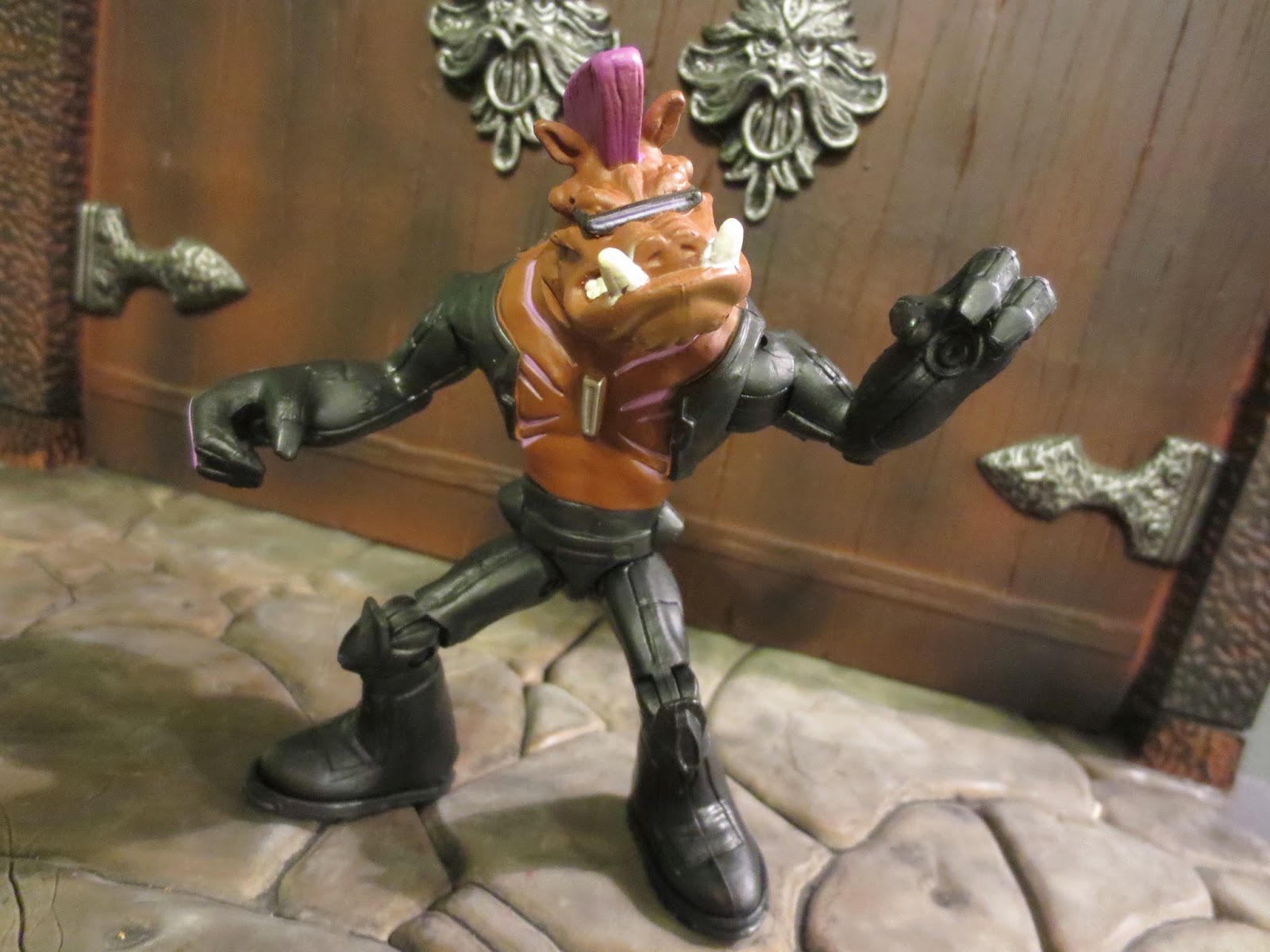 *The headsculpt is really excellent. It's nicely detailed with plenty of warts and wrinkles while still maintaining the aesthetic of the cartoon series. Bebop has quite a fierce expression on his face that is enhanced by his cool futuristic sunglasses. 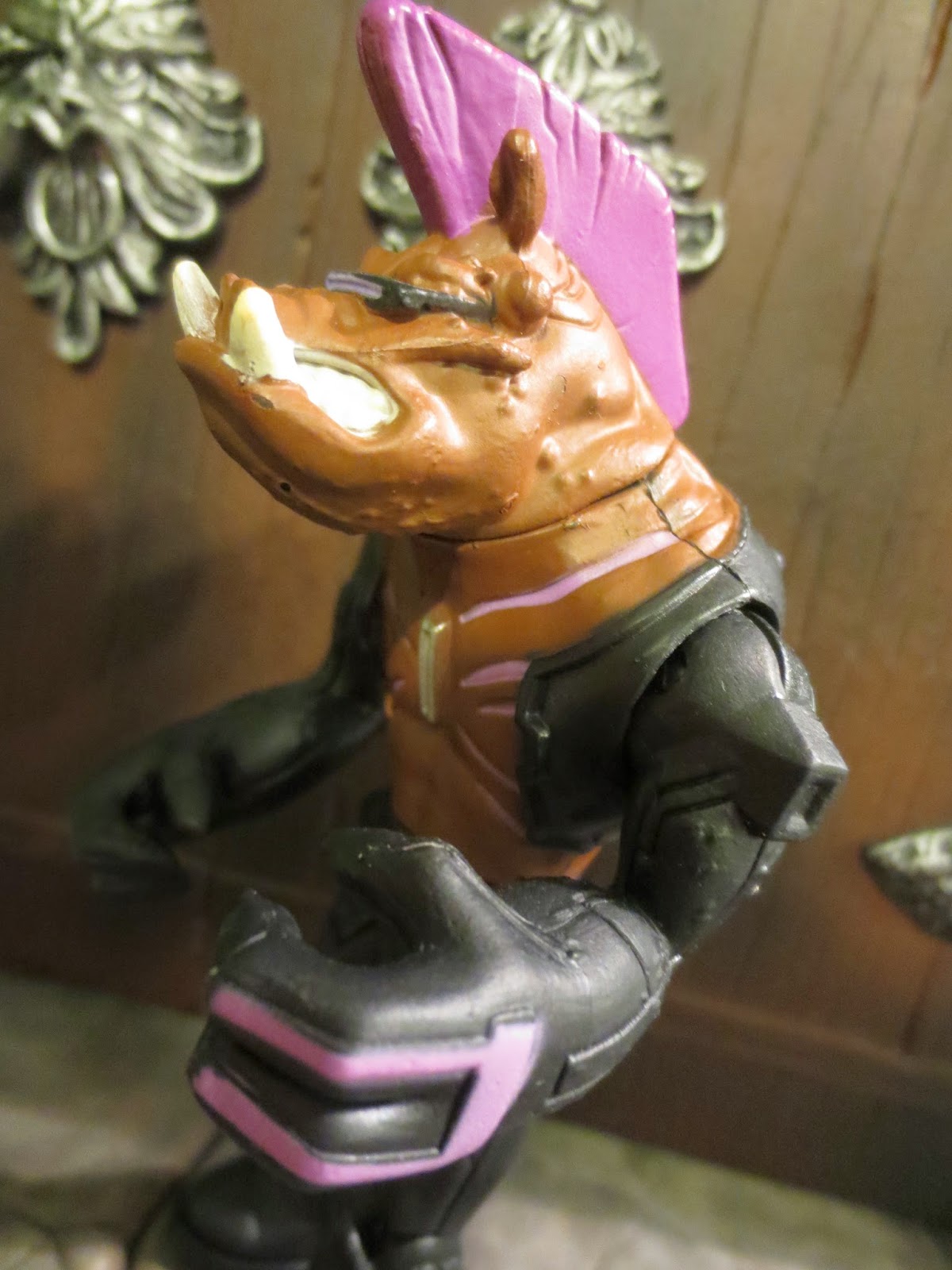 * The color scheme overall works. The black and neon purple definitely Bebop the look of a high-tech thief. Seriously, the outfit wouldn't look out of place if it were in the film Tron or was worn by one of the gangs from The Warriors. The paint details aren't incredible, but the color scheme really pops. 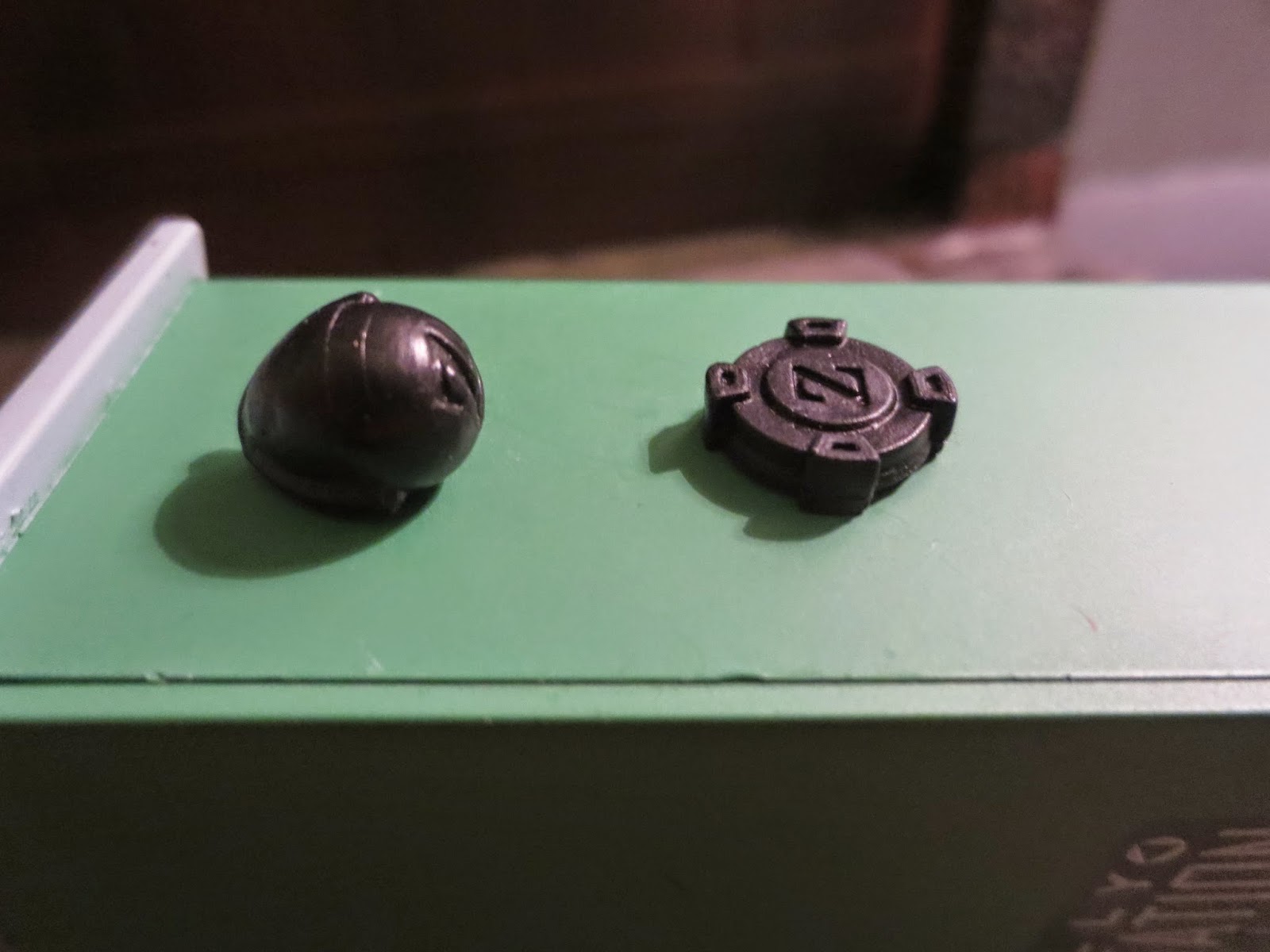 *I like Bebop's little mine and grenade. He can hold them in both of his hands although you'll have to work a bit to get the grenade in there. 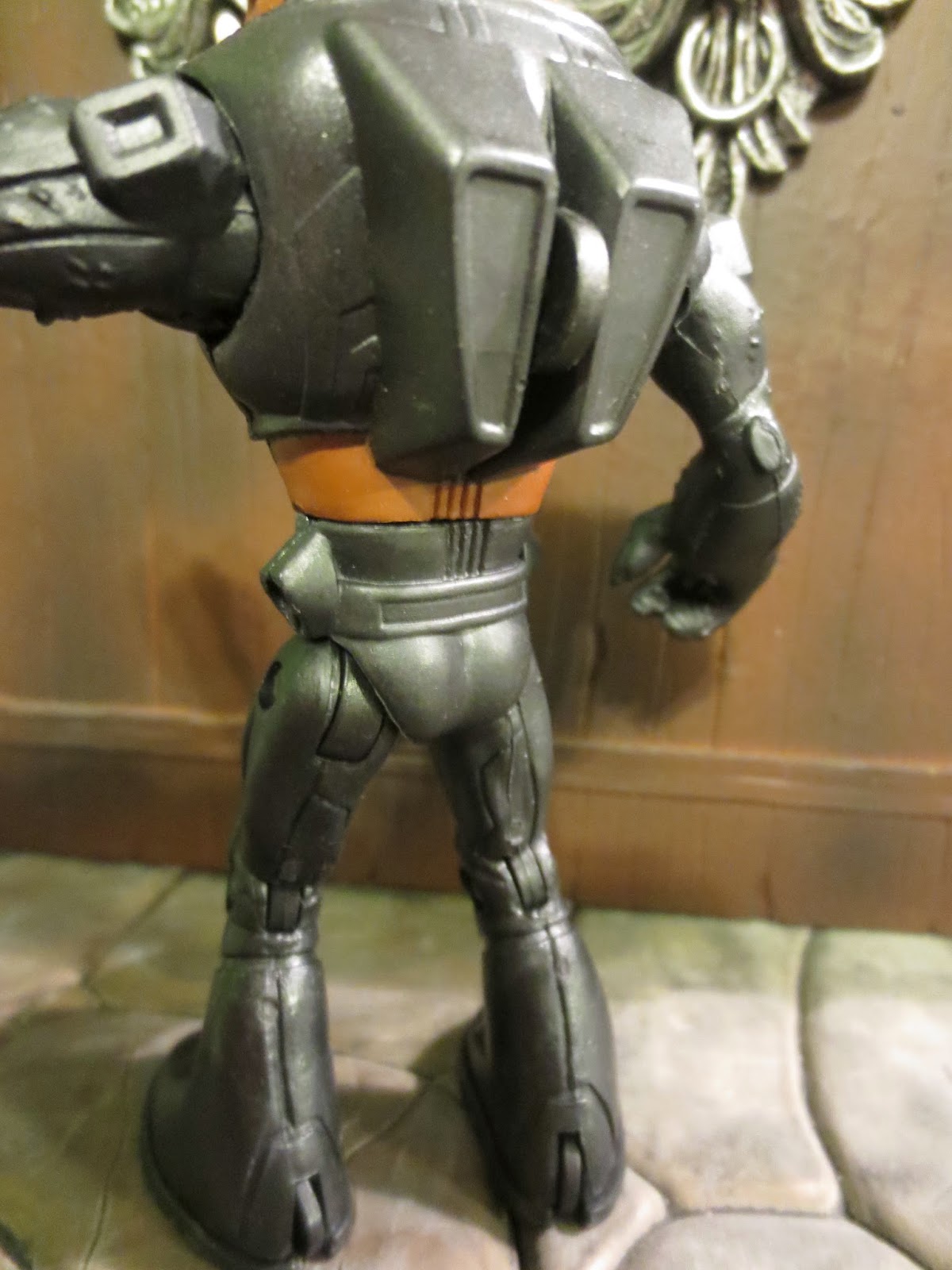 *The wheels on his back and ankles are a really neat feature. I didn't know about these until I opened the toy. It's a bit unusual, but seems like something that could be cool in the cartoon or that kids would have lots of fun with. His articulation is decent and allows for a few cool rolling poses. 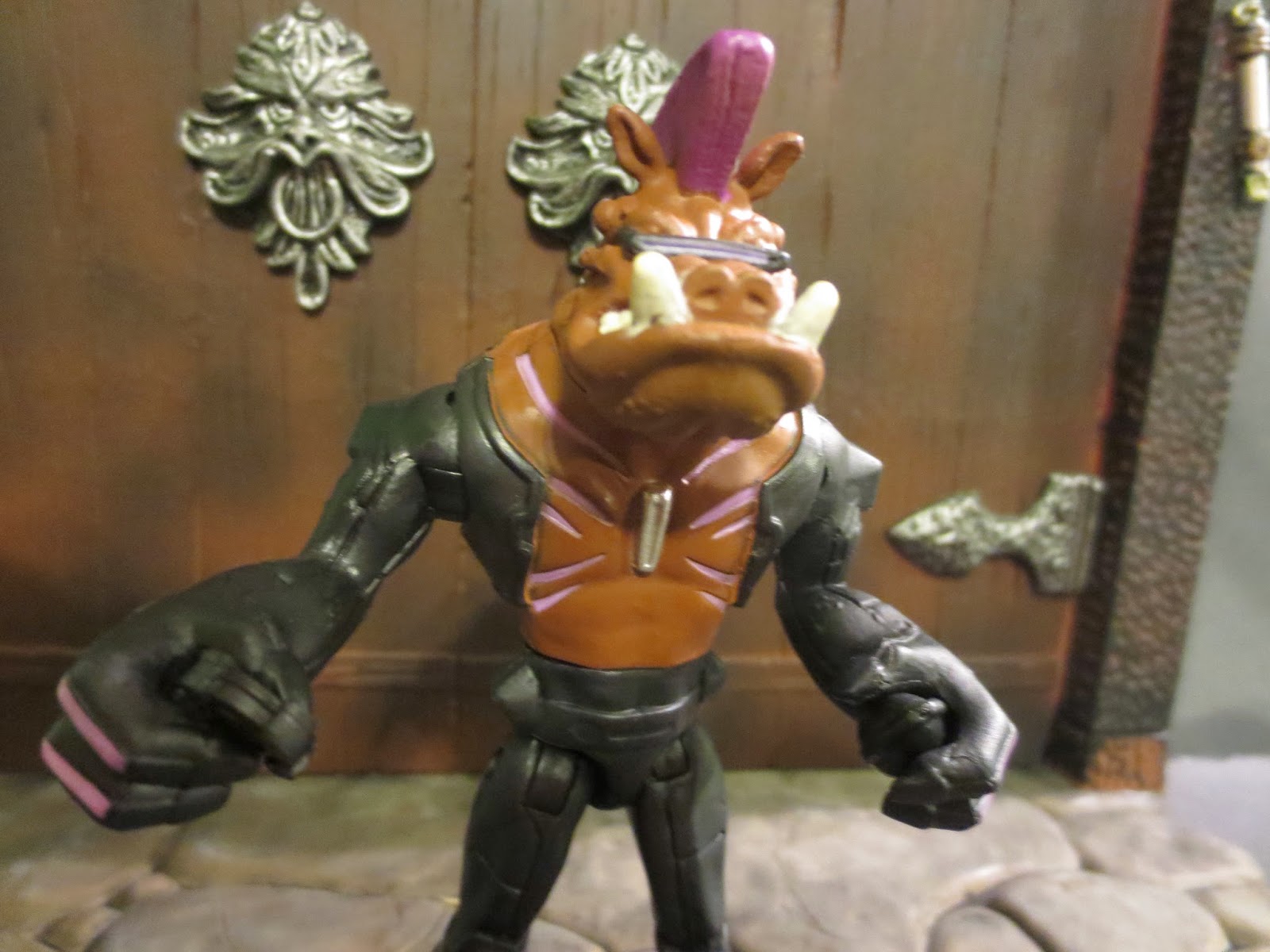 *Bebop's skinniness doesn't bother me (he's really not that thin compared to many other characters in the line) but I'm not digging the whole short leather jacket with nothing under it look. I know Bebop has traditionally been depicted with an open vest, but this just looks a bit odd. It kind of looks like Bebop should be hanging out at some sort of underground club rather than breaking into secured facilities if you know what I mean...


*Bebop's legs fell off. He didn't "break" per say, but his crotch piece separated (it is made of two separate pieces) and the legs fell out. I managed to put it back together with no problem; it probably just needs a bit of glue. Is anyone else having this problem or is this a one off kind of thing? Once again, not a breakage and not a deal breaker, but a bit frustrating.

*I really wish this guy had come with either a drill like gun or a trash can lid to reference his vintage toy. One more accessory would have been awesome. 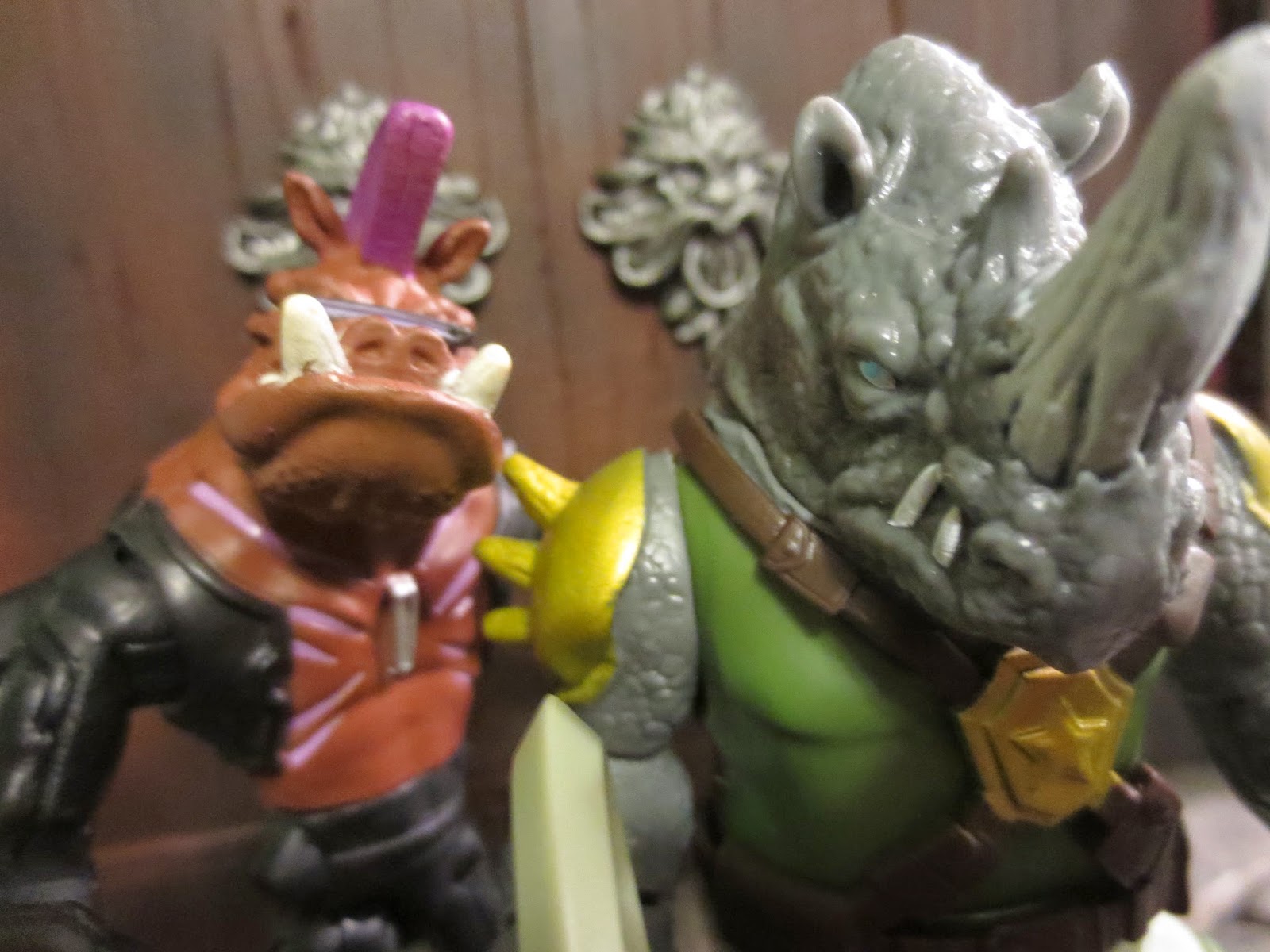 I've always preferred Rocksteady to Bebop (granted, they're really kind of inseparable) and I thought I would feel the same way when I first saw these figures. Getting Bebop in hand, though, I kind of like his toy better. His articulation is better than average for the TMNT line, his headsculpt is great, and he has a neat color scheme. I'm a bit miffed by the separating crotch but that seems more like a simple lack of glue than anything being breakable or defective. I'm a bit more lenient with this type of issue, so it isn't doing much to effect my score. Ultimately, Bebop is certainly a better than average TMNT figure. I'm giving him a Good and a half as he manages to be a fun toy that doesn't just simply rehash old territory. I'm always excited to see what new figures appear in this line as the mixture of new characters and old favorites really has contributed to the greatness of this toyline and, looking at all of the empty shelves at various retailers, it seems that kids are in agreement.