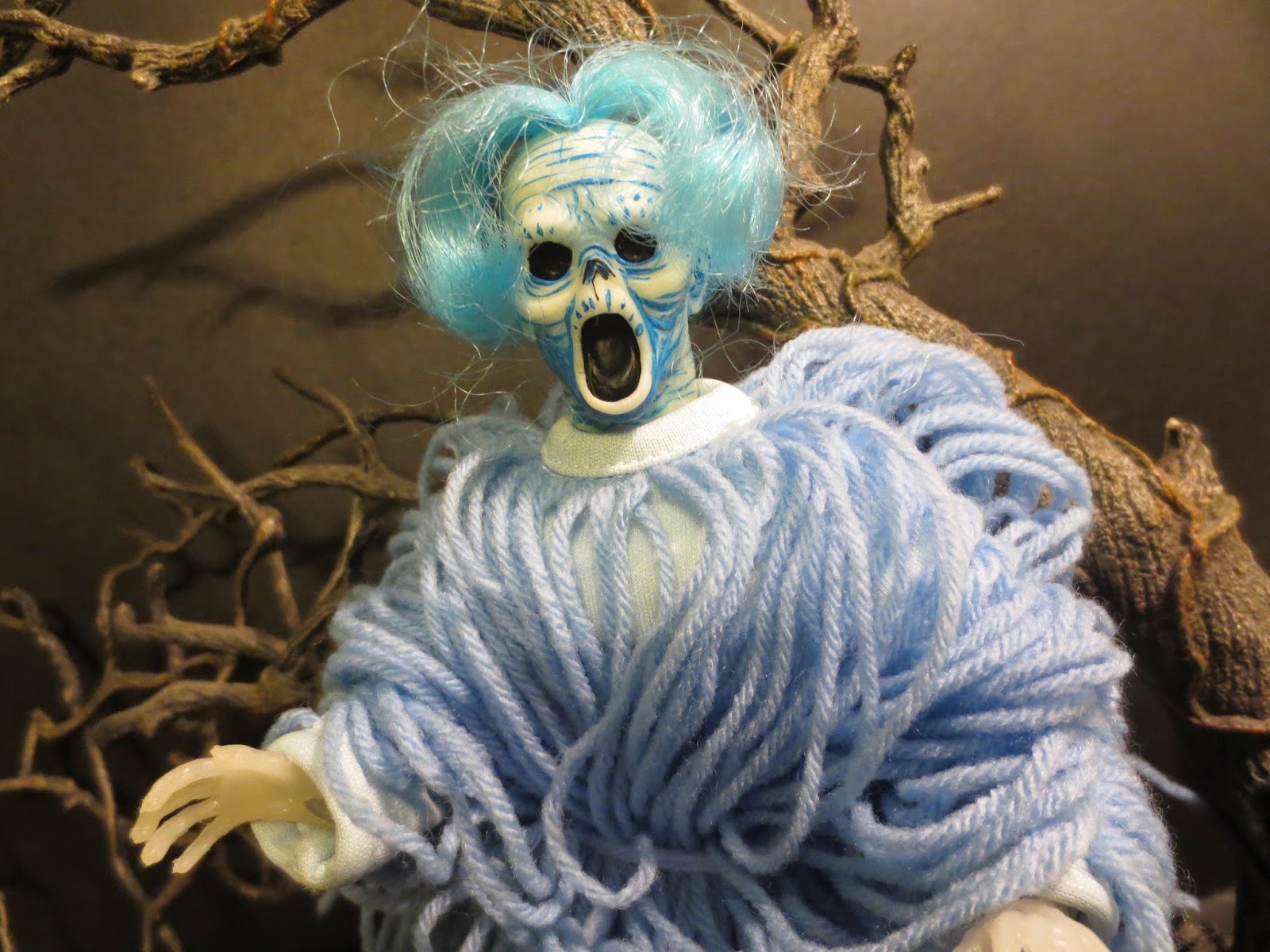 Day 17 of 31 Days of Toy Terror goes a bit old school as today we're looking at a ghost. Just a simple, old school ghost. How old school? I'm thinking this guy would definitely have been in his haunting prime in the 1960s or 1970s, quite possibly chasing Scooby Doo and the gang. Get ready for the Gruesome Ghost!
I'm not the biggest fan of Mego styled action figures but I've definitely taken note of what Figures Toy Company has been doing lately, particularly in regards to their 1966 Batman series. I find it rather amusing that this small company is seemingly finding more success and doing a much better job with the liscense and scale than the 500 lb. gorilla Mattel was able to do just a few years back.  They've been releasing both liscended and non-licensed Mego styled figures and replacement parts for at least a decade now and it was through their Mad Monsters line that they first got my attention. Designed to look like a 1970's action figure line, the Mad Monsters offered a line of groovy ghoulies for Mego fans to add to their collections. The designs of the characters were quite cool, particularly the Gruesome Ghost here, so he soon ended up in my collection. Ready to get spooked? Then join me after the break... 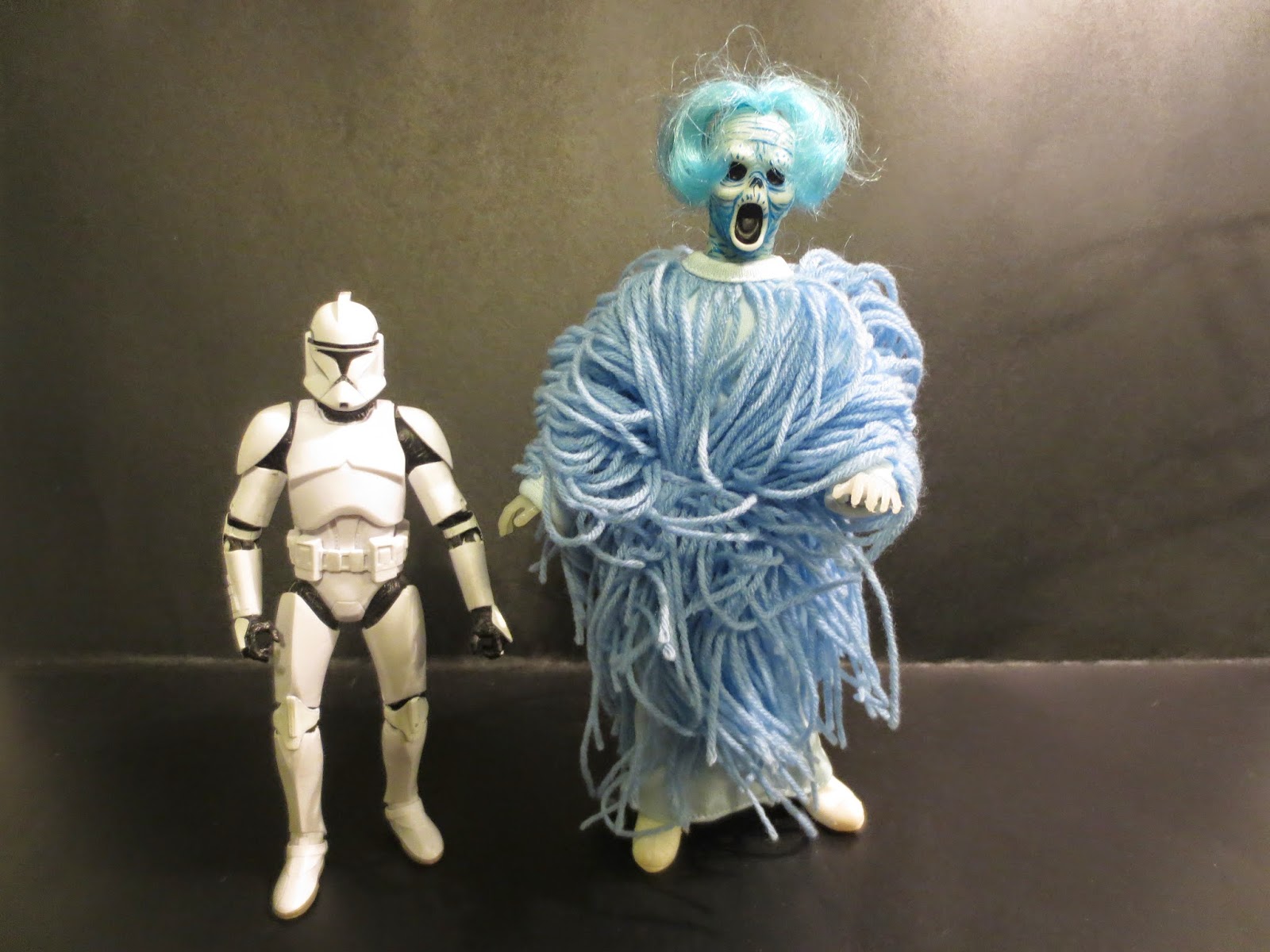 Like most toys in this scale and style, the Gruesome Ghost stands right around 8 inches tall. When it comes to crafting modern Mego styled figures there are two approaches. When companies like NECA and Mattel have released Mego themed toys they have typically worked to make them look more like modern action figures but in an 8 inch scale and with actual fabric clothing. Figures Toy Company, however, actually makes their figures look like toys that would have existed in the 1970s. The Gruesome Ghost definitely has an old school vibe to him. It really is part of his appeal. 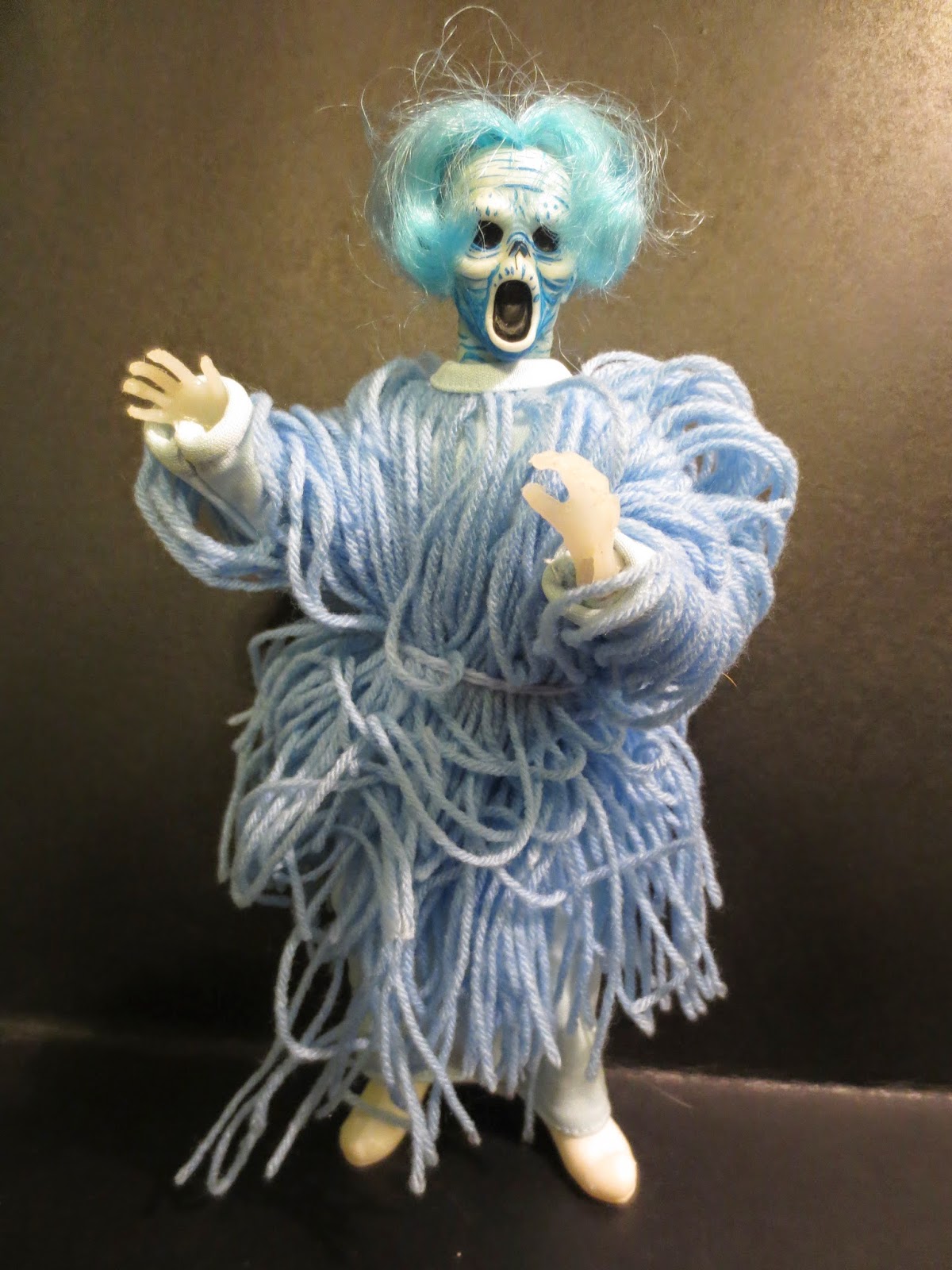 The Gruesome Ghost features quite a bit of articulation, just like a Mego figure. The Gruesome Ghost includes the following points of articulation: Hinged ankles, hinged knees, O-ring hips, an O-ring waist, ball jointed shoulders, hinged elbows, swivel hinge wrists, and a swivel neck. While the articulation isn't up to the standard of today's super-articulated figures, it does capture the classic Mego articulation and give you an understanding as to why so many collectors hold the style in high regard. Rather than just using standard joints the Gruesome ghost also uses a mixture of elastic bands and rubber "o-ring like" bands to keep the limbs connected to the torso. The Gruesome Ghost's outfit does inhibit some movement, but overall there's a lot of fun to be had with this creepy guy. 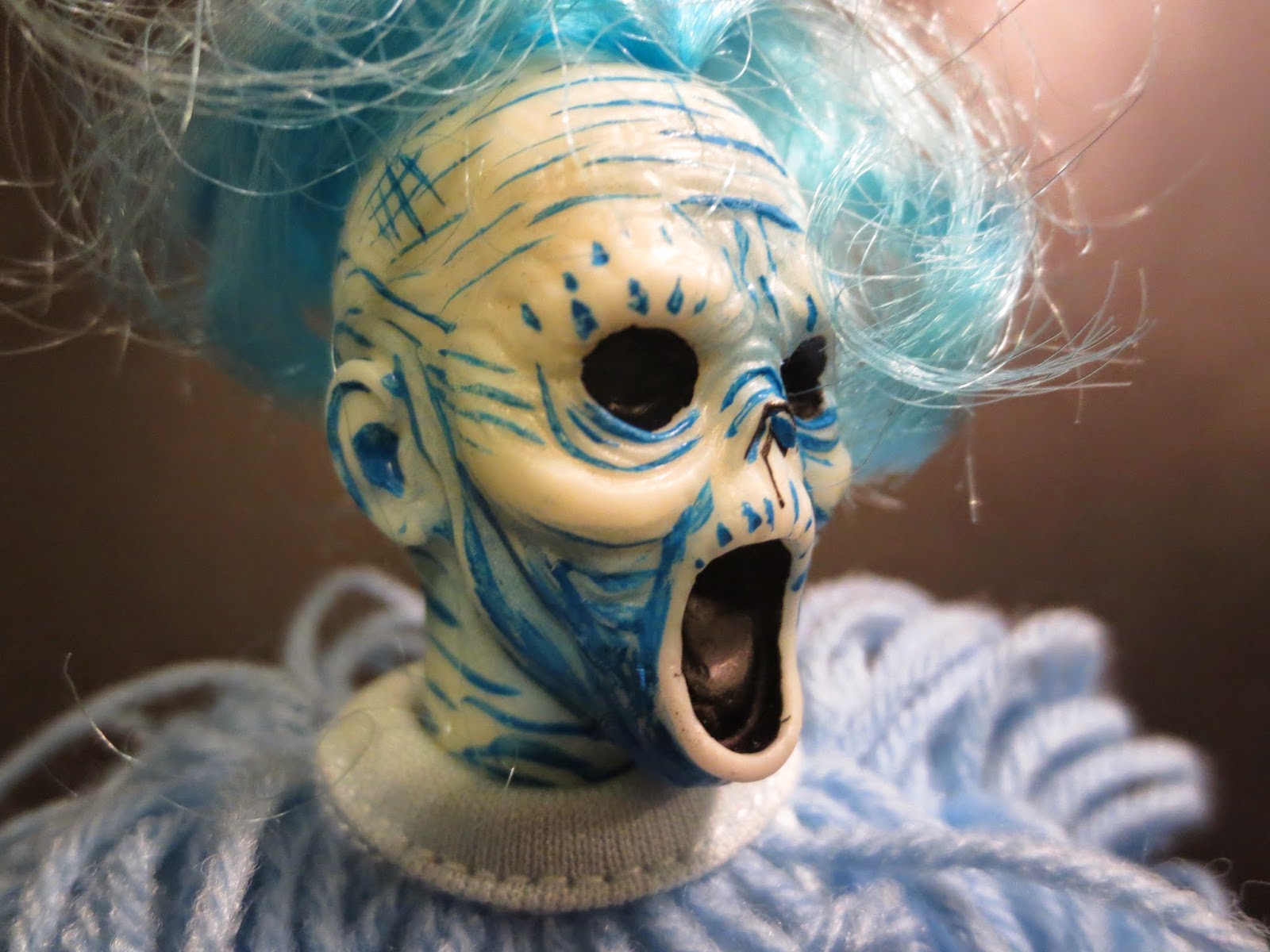 One of the hallmarks of these Mego styled figures is that they largely reuse base bodies with new heads, clothing, and accessories. Looking at other figures released by Figures Toy Company, it seems that the Gruesome Ghost is no exception. His base body is a pretty standard, plain body that is surprisingly muscular underneath his robes. His hands are rather cool, though, and actually look a bit skeletal. They're molded in glow in the dark plastic which really adds to the overall effect of the figure. The head is where this guy excels, however. It is just so....creepy! It really looks like an old rubber Halloween mask or something that would have been painted on the side of a ride through haunted house at a carnival or something. The blue rooted hair is really just a bizarre blue cherry on this sundae of strange. I love it! 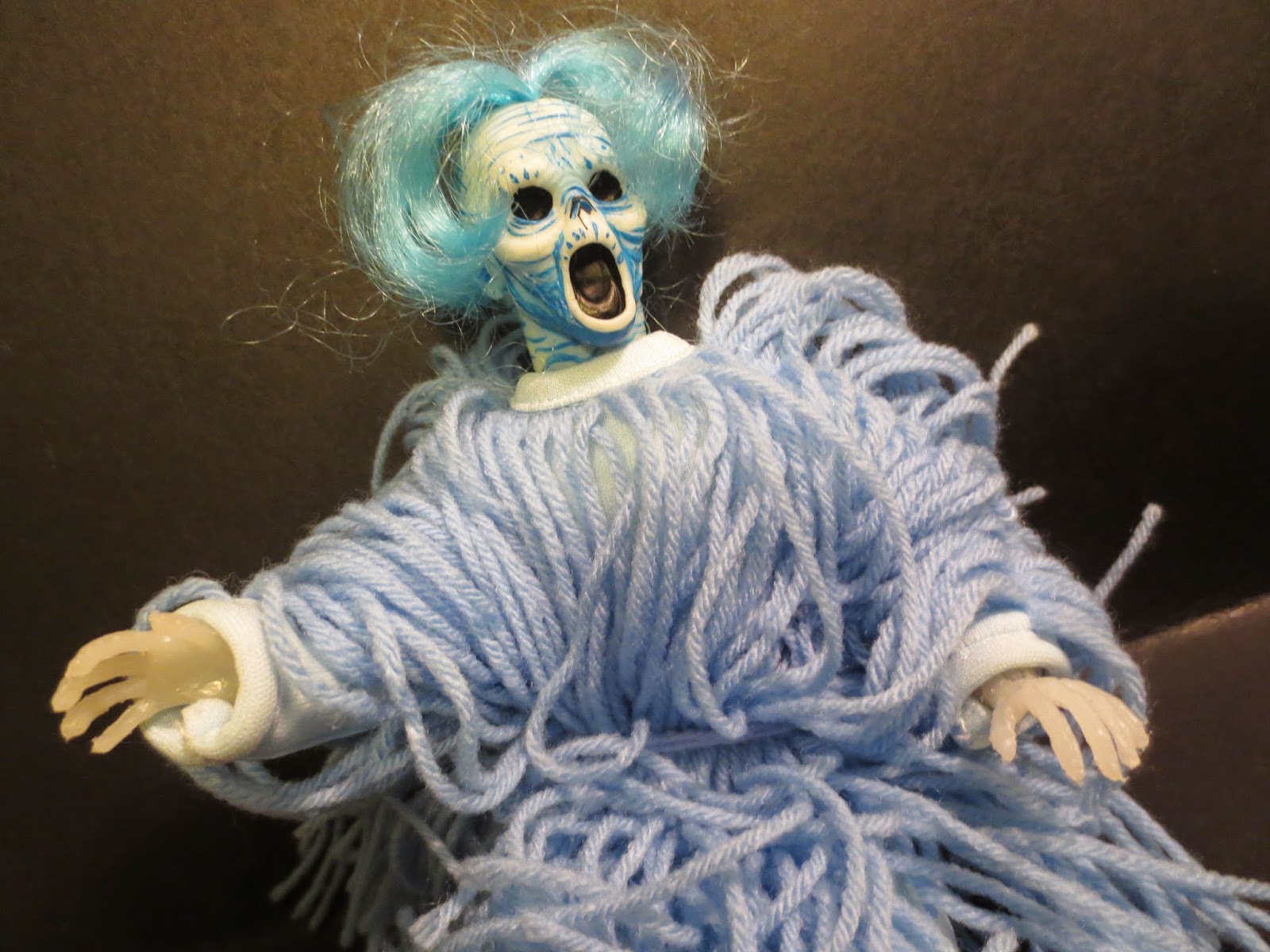 The paint is pretty basic on this guy. The body is all molded in white (except for the previously mentioned glow in the dark hands) since the outfit is what gives this guy his more unique countenance. What exactly is this guy wearing? It's a standard light blue robe covered in...blue yarn? Is this what ghosts wear? Something about this outfit kind of reminds me of the bizarre getup of the Declan Mulholland version of Jabba the Hutt. This is without a doubt one of the strangest outfits I've ever seen, but you know what? I love it. I really, really do. It truly looks like an old school Halloween costume from the 60s or something. Darn, this guy is cool. 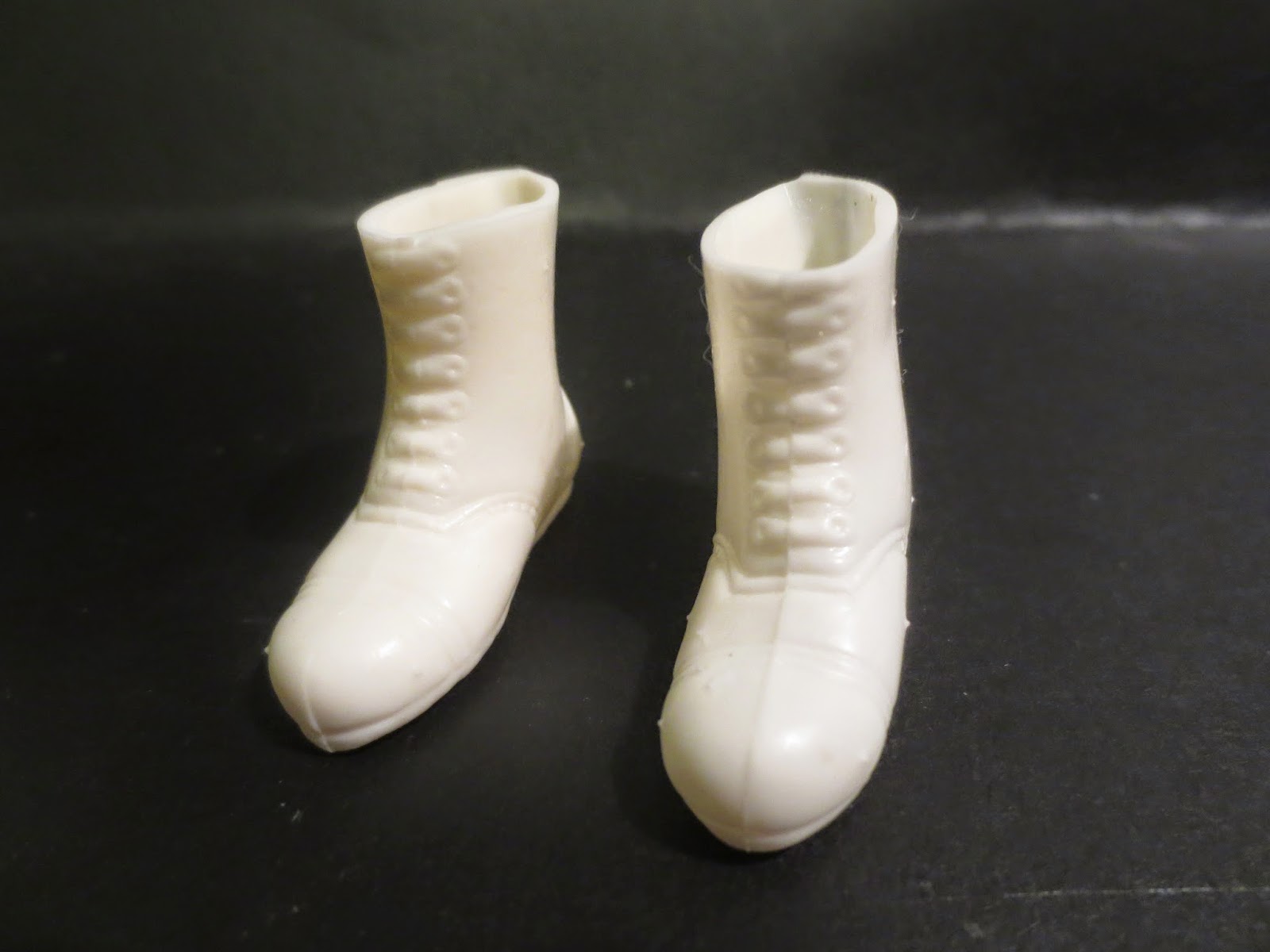 Not counting the outfit (which is removable in case you want to see the Gruesome Ghost's Halloweenie), the only accessory this guy comes with are his boots. Yeah, they're removable. They're cast in a white rubbery plastic and have some really soft sculpting on them depicting laces and stitching. Interesting boots for a ghost, really. 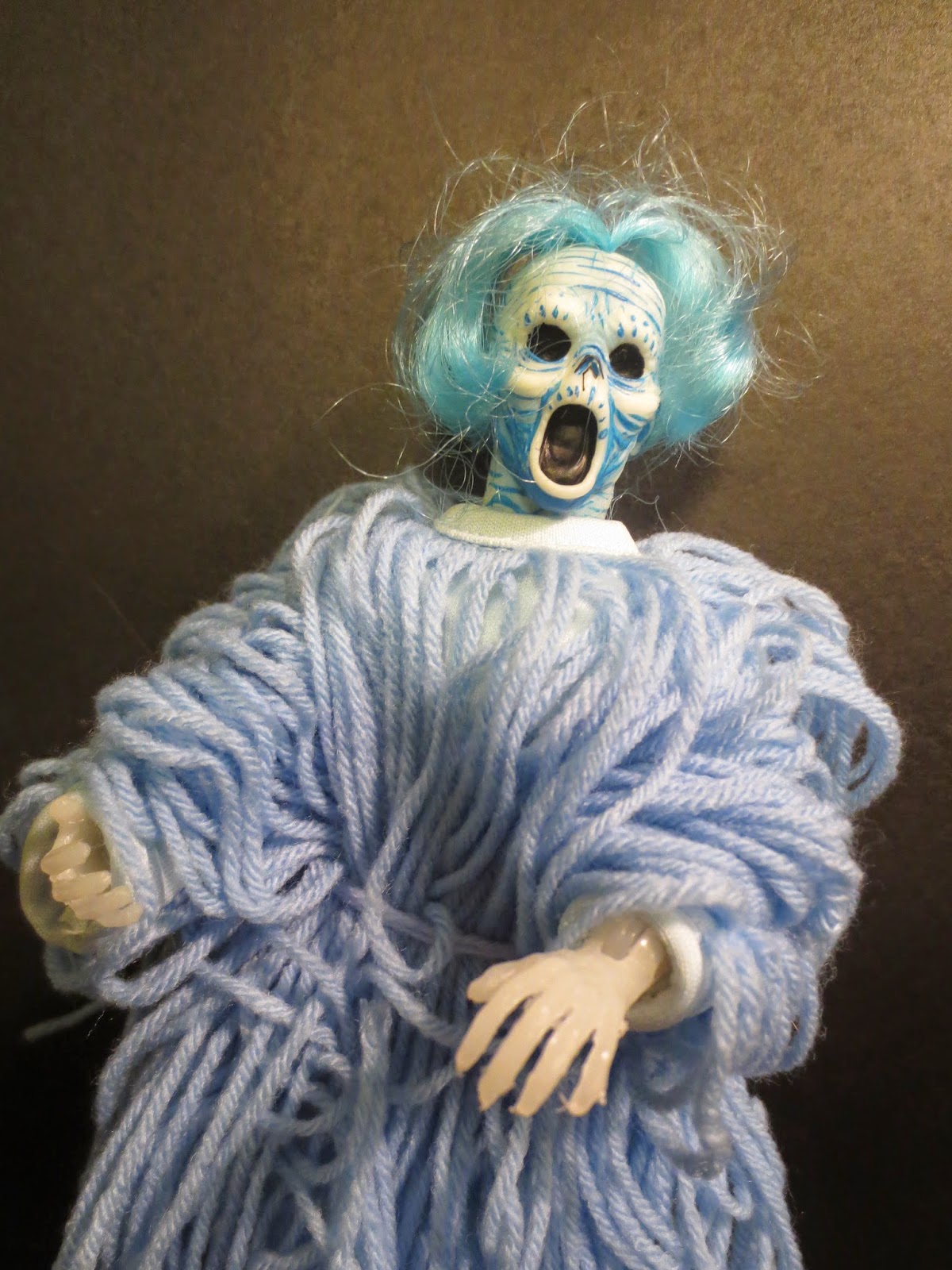 What can I say? Even though I'm not the biggest Mego fan, their is just something so darn special about the Gruesome Ghost that I can't help but love him. He's just so darn awesome and weird that I can't help but love him. The quality is pretty decent and anyone interested in something a bit strange that looks like it could easily be emblazoned on the side of a van fighting a wizard should consider tracking this guy down. I'm giving him a Great and a 1/2 rating just because I can. This guy definitely is at least as cool as Boo Berry. No doubt in my mind about that.