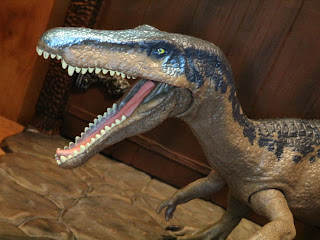 Today I'm checking out another entry in the Jurassic World: Roarivores line and it's a pretty cool entry in the series: The Baryonyx! The Baryonyx was listed as being an inhabitant of the original Jurassic Park but apparently never made it onto the island. In Jurassic Park III it is mentioned but we never see it. Finally, Jurassic World: Fallen Kingdom gives us a full on Baryonyx appearance when the creature attacks Claire and Franklin in a lava flooded computer room. It was definitely one of the highlights of the film, wasn't it? While Fallen Kingdom isn't my favorite of the Jurassic Park films, I really love the diverse number of dinosaurs it offers. Let's check out the very cool battery operated Roarivores Baryonyx after the break... 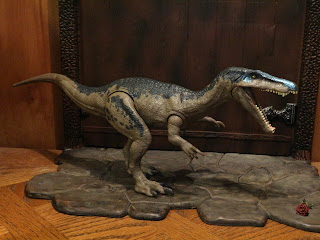 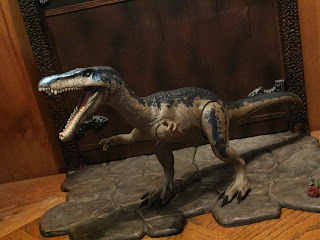 * Like most of the other Roarivores dinosaurs, Baryonyx has balljointed hips and swivel/hinged shoulders/ While the head isn't articulated like most others, Baryonyx is still pretty poseable for a dinosaur toy and is quite fun to play with. These are sturdy, well made dinosaurs that should please the kids and the collectors. 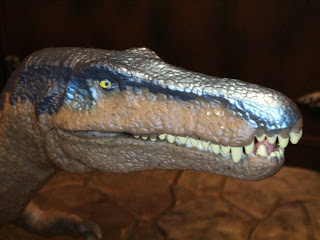 * I love the head sculpt! The Baryonyx is very creepy and has an elongated, crocodile like snout with lots of sharp teeth. The small, beady eyes and the metallic blue paintjob on the top of the head really give her an unusual, almost alien appearance. 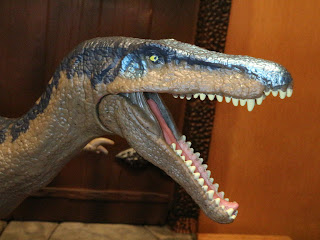 * Push a button on the Baryonyx's back and she lets out a roar and snaps her jaws shut. There are three unique roars that cycle through. It's quite fun and the roar is nice and loud. 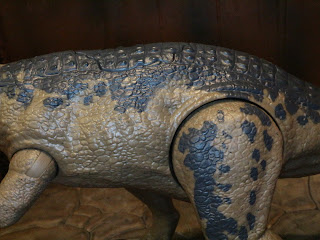 * The detailing on the skin is quite intricate with paint work that gives the Baryonyx a fairly complex appearance. I like the compromise Mattel has take with this line on the dinosaur skin colors. I know that we really don't know what color dinosaur skin was but Mattel has blended some realistic looking skin tones with some fun "toyetic" patterns that make things a bit more exciting. 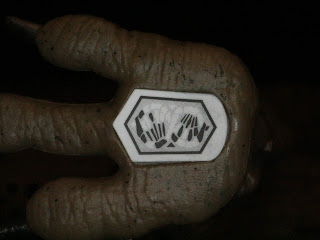 * Remember how the Kenner dinosaurs had that little "JP" brand on them? Mattel's dinosaurs don't have that but they do have this cool little symbol (maybe some sort of DNA-like design?). Scan it with a smart phone and you can add new dinosaurs into your park in the Jurassic Facts App. I borrow my wife's smart phone to use it (I don't have one) and it's kind of cool. It's a collecting/ trivia based game where you collect dinosaurs, learn facts, and take trivia quizzes. 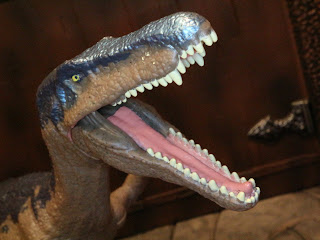 * Like the other Roarivores, I kind of wish that pushing the button opened the jaw of the Baryonyx rather than closing it. It just seems more intuitive for the feature to work that way in my eyes. 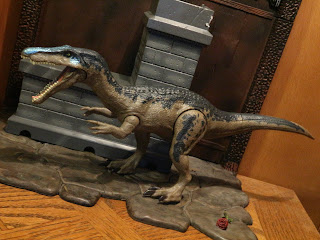 The Baryonyx is another cool dinosaur that Mattel has worked into the Jurassic World line. Kenner released the Baryonyx a couple of times too, including in both the original Jurassic Park and the Lost World lines, but Mattel's dinosaur is the most impressive. She is another Great entry in a line that I'm hoping has some long legs. The film certainly seems to be doing well and while it isn't as kid friendly as past entries, that never keeps kids from watching it or from loving dinosaurs. The series 2 stuff has been creeping into stores but the series 1 items are still easily available at this point.


I've actually reviewed on other Baryonyx: The miniature Baryonyx from the Mini Dino Multi Pack!