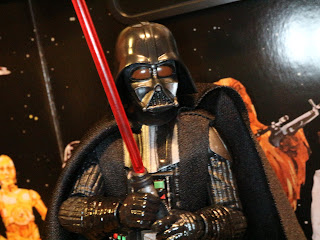 I'm a bit late posting this but yes, today is the 40th anniversary of the release of Star Wars. To celebrate I'm looking at one of the releases from Hasbro's recent Star Wars: 40th Anniversary Collection action figure series: The Legacy Pack. To celebrate the 40th anniversary of the film, Hasbro has released (or re-released) Black Series figures of all twelve of the original Kenner Star Wars action figures from 1978, plus a few random extras as exclusives like R5-D4 and Luke Skywalker in his X-Wing Pilot gear. While the rest of the figures are available on upsized vintage style cards, Darth Vader is unique in that he comes included with what is labeled as the Legacy Pack. The set, retailing at $40 bucks, includes a carded Darth Vader figure and a display stand that's very similar to the one included with the 1978 "Early Bird Kit." Besides this desirable due to being part of the 40th Anniversary Series, this is also Hasbro's second attempt at sculpting a Vader; the original Black Series figure, based on Vader's Return of the Jedi costume, turned out being just so-so. This one, it turns out, is a complete new sculpt based on the A New Hope outfit. Ready for a closer look at this set? Then join me after the break... 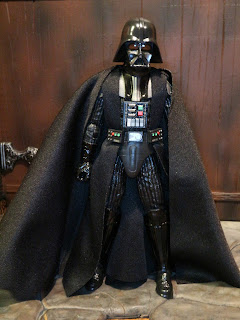 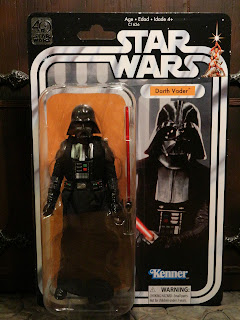 
* First things first, I do have to point out that the vintage styled blister cards do look phenomenal. They're quite thick and sturdy, obviously designed to look gorgeous on display. I don't collect anything mint in package but I do have to admit that I'm tempted to get a set of these whenever I see someone post a picture of the entire collection of 14 figures. We can only hope that Hasbro does something similar for the 40th anniversary of The Empire Strikes Back in a few years! 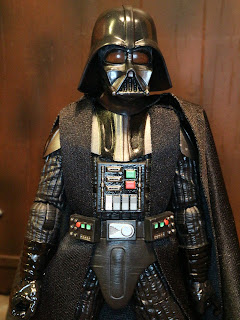 * While I initially thought there were only a few new pieces on this Vader figure (head, chestpiece, belt) it turns out that everything was created new for this guy. This is an incredible Darth Vader figure. Considering how many Darth Vader action figures I've owned since I first really got into Star Wars as a 6th grader, I think it's no small claim for me to say that this might be my favorite version yet. He just looks so...authentic. Vader has one of the most iconic costumes in any form of visual media and when it's captured near-perfectly, it's just glorious. This is a beautiful figure. The various paint and plastic colors used show off a wide range of different levels of glossiness and unique textures, helping to capture Vader's costume in plastic. Something was off about the first Black Series Vader in Phase II; this guy is dead on. 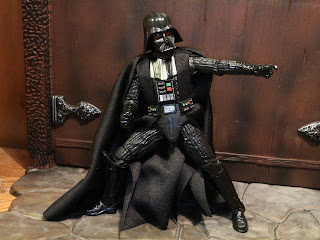 * The articulation isn't much different than the original Black Series figure, but that's not a problem. Overall Vader moves quite well and has a full range of motion. While Darth Vader is a menacing, intimidating character, he's not exactly the most mobile, so you actually have more articulation here than you even need. Whether you want to depict Vader just standing around looking chill or going full Rogue One on a bunch of Rebels, this figure delivers. Mostly. There's one weakness (just like the Death Star!), but I'll get to it in a minute. 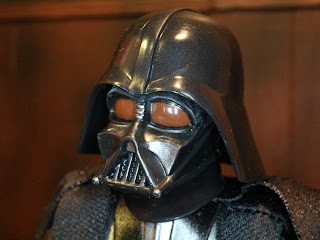 * The headsculpt is probably the most significant new aspect to this figure that separates it from the previous release. While the first version did have a great unmasked Anakin head when the helmet was removed, the distinctive look of Vader's helmet suffered because of that feature. This one looks perfect. Translucent reddish-brown eyes? Check. Perfect grating on the breathing mask? Check. Silver paint on the cheeks? Check. Hasbro obliterated their previous efforts in delivering this figure! 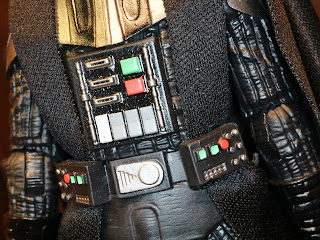 * Vader's costume does change slightly from film to film and Hasbro certainly did not neglect those small changes. The chest panel and small boxes on Darth Vader's belt feature some very intricate paint and sculpting. 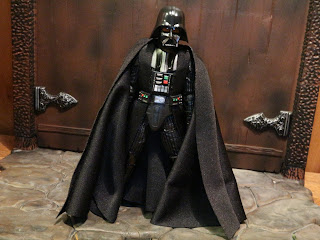 * This is a figure where the actual fabric good truly add to the appeal. Not only does Vader feature a very nice, very heavy cape that flows oh so menacingly but he also has the interior robe. The inner robe hangs across the front sides of Vader's torso before it reaches his belt and flows down into the lower robe. The fabric is of a very fine quality and looks perfect. 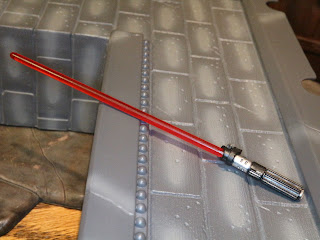 * Vader only includes his lightsaber, but that's about all he really could have come packaged with (except for the Interrogation Droid, which is coming with Tarkin). This lightsaber, in both sculpt, paint, and translucent of the blade, is also an improvement over the previous Vader. 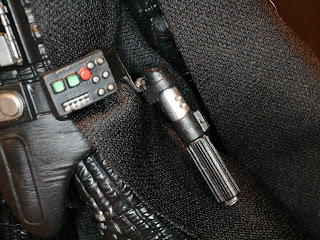 * The hilt now has a loop and the belt now had a hook. It's a bit tight, but Vader can now wear his lightsaber on his hip underneath his cape. 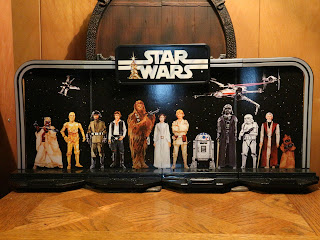 * While Darth Vader is the main selling point of this set, we do need to talk about the other half of the Legacy Pack: The display stand. It's fairly large (you have to assemble it) and features a double sided cardboard display wall to show off a collection of Star Wars figures. While I have some qualms with the execution of this piece (I'll get to them in a minute) I do like the thought behind this. It's a cool idea that captures well the nostalgia for the original line (even for some of us who are two young to have experienced it). 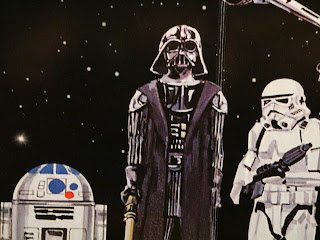 * The classic art, created before the release of the original toyline, is present here. I love the look of these characters. There's something about how charming and colorful this art is that makes it timelessly appealing. 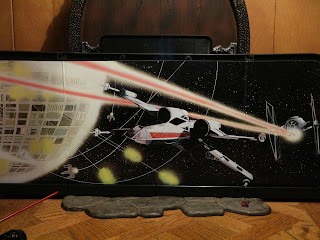 * The cardboard backer is reversible, giving you the option of displaying your figures in front of artist renditions of the original 12 Kenner figures or in front of a painting of a Death Star battle scene. I prefer the characters, but having two options is nice. 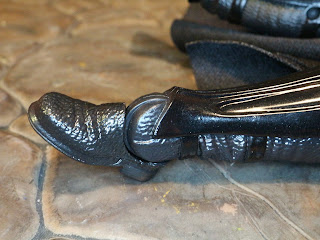 * My only complaint about Vader? He has some very weak ankles. Mine really tends to fall over when standing up in certain poses. Fortunately, I use Kaiser stands with most of my Black Series figures, but this is still really a problem. 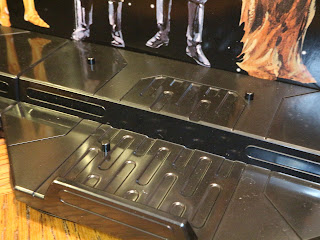 * Let's talk about the stand now, as I have quite a few problems with it. First of all, the foot pegs don't even with with all of the figures in the line. They're also really close together: There is no way you can display three regular sized figures without them looking overly cramped. The base needed to be a bit larger. 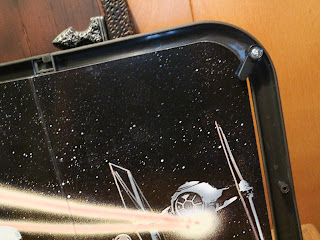 * Also regarding the stand the construction of this thing is just too darn flimsy. Considering that every other Star Wars: The Black Series figures is $20, I have to assume I paid $20 for Vader and $20 for this piece. Folks, this piece is not worth $20 bucks. It's a few thin plastic rods and a piece of cardboard. The backdrop doesn't even "attach" anywhere. It just rests in the display base and is held in place by some loose arms. 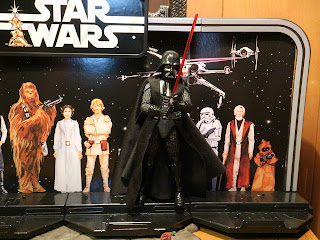 * I think the base is just too small overall. This might look great for smaller figures, but for 6 inch figures? It just seems like it's a bit undersized and certainly underwhelming. Again, I love the idea of this piece but the execution leaves much to be desired. 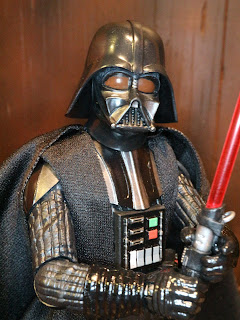 If I were reviewing these separately, I'd be giving Darth Vader a Great and a 1/2 (with a hit because of those weak ankles!) and the display stand a solid Crap rating (and you know I don't give those out often). As a pair, though, I'm going to go with a Good rating. While I'm sure we'll see this Vader again at some point in the future, I doubt most fans will want to wait. Plus, this will probably be the only way to get him in his swanky vintage styled packaging. Still, I can't help but feel like Hasbro packaged Vader with a bit of a turd in order to get us to pay more for Vader. The display base, as well intentioned as it might be, is just a waste. It didn't need to be included. In fact, Vader should have just been a regular release in this series.