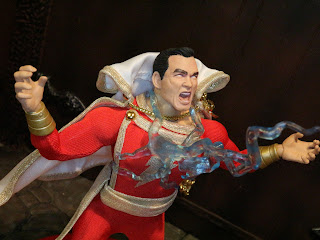 What do you get when you combine Solomon, Hercules, Atlas, Zeus, Achilles, and Mercury? Why Shazam of course! Today I'm checking out the newest One:12 Collective action figure and it's Shazam from Mezco's DC Universe range of characters. Mezco has stuck to extremely popular modern characters thus far but Shazam seems like the first character that has a very classic feel to him. Yeah, I know he's still a part of the DC Universe and only had his named changed to Shazam (from Captain Marvel) in 2011, but when compared to Batman, Punisher, Green Arrow, and the Flash, Shazam just feels a bit more more obscure. Still, I like that. I dig the more obscure DC characters and while Shazam has never been one of my favorites, he's a great character and well deserving of a figure. Of course, he does have a film slated for 2019, so Shazam might come back around to being a household name in the next few years (in the 1940s the guy outsold Superman!).With Shazam Mezco has showed off some neat tricks in how they might pull off some more traditional superheroes in the future, so even if you're not a fan of the character he's worth paying attention to just because of his execution. Join me in taking a closer look at young Billy Batson as the heroic Shazam! 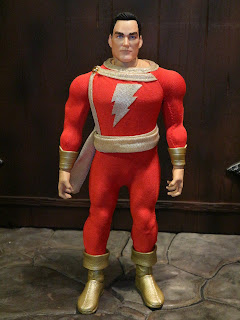 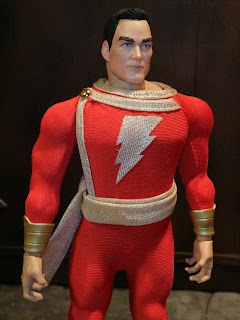 * I really like how Shazam turned out. While he certainly looks like he belongs with the other One:12 Collective figures, he has a very classic aesthetic that gives him a very different feel. Shazam is wearing very nice costume that's made from a thicker material. It's very clear that this isn't intended to be a spandex costume even though it fits the figure very well. Mezco opted to go with gold trim rather than yellow (a great choice) and the various gold elements really help him both to pop on the shelf and to look different from the Flash. This is an excellent, timeless looking figure, and I'd love to see more classic comic and pulp characters done to stand alongside him. A Golden Age Sandman would be amazing! 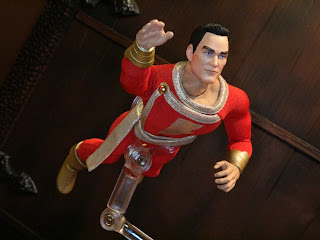 * The articulation is very nice on Shazam! He has all of the functional but hidden joints you would expect from the One:12 Collective line (the ankles are a bit better than some of the previous releases, too) and they all work great. I love how good he looks in flying poses. How many other 6-7 inch scaled figures actually look decent when flying. Has any company made a Superman figure that actually looks decent in flying poses? Shazam looks like a total boss in the air, and the flight stand helps him maintain that pose. 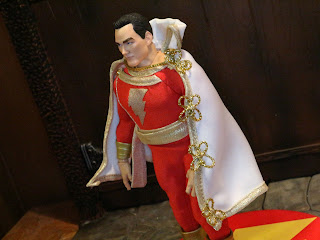 * While quite a few of my pictures showcase Shazam without his cape, that's simply because I wanted to point out other details of the figure. He absolutely has a cape and it's very elaborate. The stitching and details are pretty fancy, that's for sure. The cape also has a wire along the edges so you can pose it however you like and give it a bit of dramatic flair. 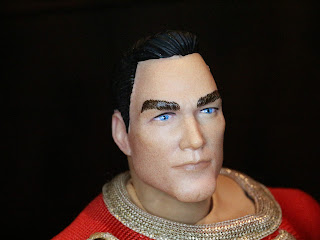 * Shazam includes three headsculpts, all of which are pretty awesome and certainly show off some epic eyebrows. Yeah, the dude's rocking some seriously fierce eyebrows but that just adds to his vibe. He has a great stern expression that's very classically heroic while still managing to have an appearance that's different from Superman's visage. Nice paintwork here, especially on the eyes. 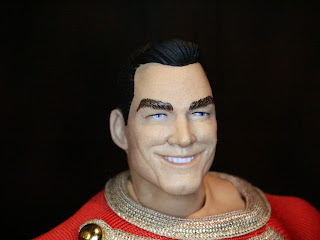 * The next headsculpt is a very classic looking Shazam. I love that cheesy grin! Since he's essentially a child at heart, Shazam has a sense of humor that just spills of his character. This sculpt shows Shazam with a slightly mischievous grin and a sense of pure joy over his superheroic endeavors! 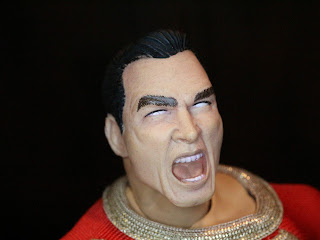 * Last, but not least, is the shouting Shazam! While this one might initially look Shazam is showing off his O face, in person it looks great and rather terrifying. The open mouth and white eyes absolutely show why Mezco's sculpts and paintwork are far above nearly everyone else working in this scale. 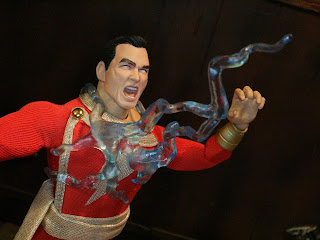 * Shazam includes a lightning bolt that fits over his chest to help reenact any of the numerous scenes where he's transforming and emitting a massive lightning bolt from his chest. I love these effects as they add so much to the display! 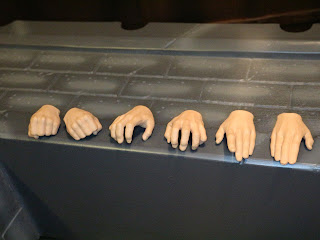 * While Shazam doesn't come with as many hands as some figures in this line, considering he doesn't really interact with any handheld accessories this is a pretty decent selection. He's got a set of fists for punchin', a set of grappling hands for grapplin', and a set of open palms for flyin' poses! They swap easily and look great. 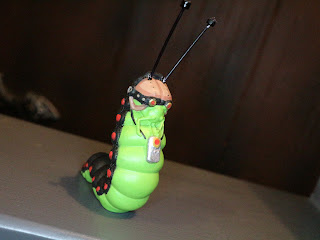 * Shazam comes with something pretty impressive: One of his archenemies, Mr. Mind! A small alien worm, Mr. Mind is a tiny little figure with some incredible sculpting and some solid paintwork. This is an excellent accessory. I'm not terribly familiar with the character but I'm digging his inclusion. 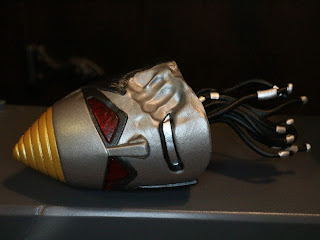 * Shazam actually includes a part of another one of his villains: The battered, broken head of Mister Atom. This is an incredibly cool accessory with translucent eyes, cables dripping out of the base of his head, and a Shazam sized fist print pounced into the metal. Stunning work here! 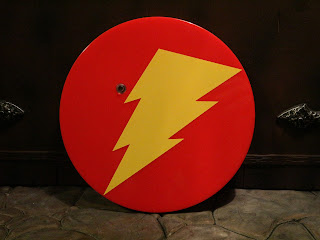 *  Like every other One:12 Collective figure, Shazam comes with a personalized display stand. His is the Shazam lightning bolt logo. The peg to hold the figure on the stand is positioned off center to give the figure plenty of room to stand or run. 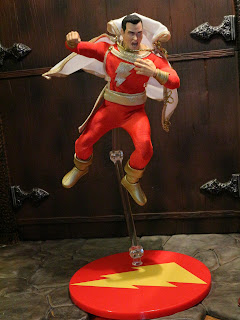 * Shazam also includes the same clear plastic display arm that most other figures include. It can be inserted into the included display base where the foot peg is (you just have to remove the peg) and allows for some great, secure poses here as the joints are very tight on the display bar and it can absolutely support the figure's weight. Shazam looks great flying and in various floating, fighting, and combat poses. 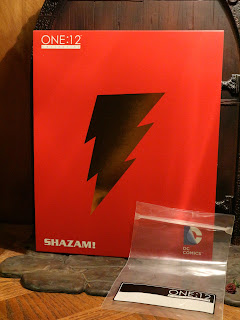 *  Mezco makes these figures very easy to store. For longer term storage, it's nice to know that the gorgeous boxes these figures come packaged in are completely collector friendly. Second,to keep the extra hgeadsculpts and hands close by when not in use, Mezco also gives you a cool branded bag. It's just a simple plastic bag with a Ziploc styled closure, but it's appreciated. 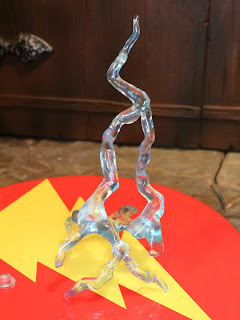 * I really like the lightning effect but I wish it stayed attached to Shazam's chest a bit more securely. It really just fits over the chest and stays due to the shape of the smaller lightning crackles on the end but something possibly utilizing magnets or just a more snug fit would have been preferable. 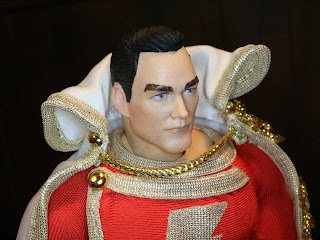 * The cape on this figure is gorgeous but I'm not completely sold on the way it attaches to the figure. It just rests around Shazam's neck, which is definitely comic accurate, but it tends to float around a bit more than I would have liked. Having some way to anchor the cape in place would have been ideal. 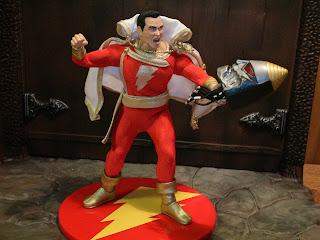 Honestly, my only complaints with this figure are small issues that I think Mezco could have handled just a bit better. Overall, this is an incredible One:12 Collective figure with some excellent headsculpts, an incredible head from Mister Atom, and the Mr. Mind minifigure. The costume, headsculpts, and everything with this figure is absolutely incredible. You really feel like you're getting your moneys worth with this figure and he looks amazing on display. Shazam is a Great and a 1/2 figure and well worth adding to your collection if you're a DC Comic fan.


I haven't reviewed any other Shazam toys but I have reviewed a few other DC Universe figures from One:12 Collective, including: